Canadian Regiment
Hi everyone! in this thread i will cover the assembly, electronics, finishing and painting of a 3D printed Plasma riffle kit from rogue workshop. this project was steched out over almost 2 years (the project itself being shleved for 1.5 years. due to this, some documentation is missing and i will be only tackeling the broad scope of it, so dont hesitate to ask any questions related to this build! furthure more, as i am writting these words, the project is not quite done just yet and a bit of painting is still eft, so expect an update some time soon!

to start off with the kit, it started out with all the printed bits in sections like so. before anything, i had to figure out the LED situation. I wanted a blue light for usual situations, but also a red light for the over heating part. at the time, i had never worked with addresable RGB LED so i decided to do a simple 5V LED strip running from a rechargable phone power bank stached away in the top of the higher half of the body, neatly out of the way but still roughly reachable trought the opening of the vents. 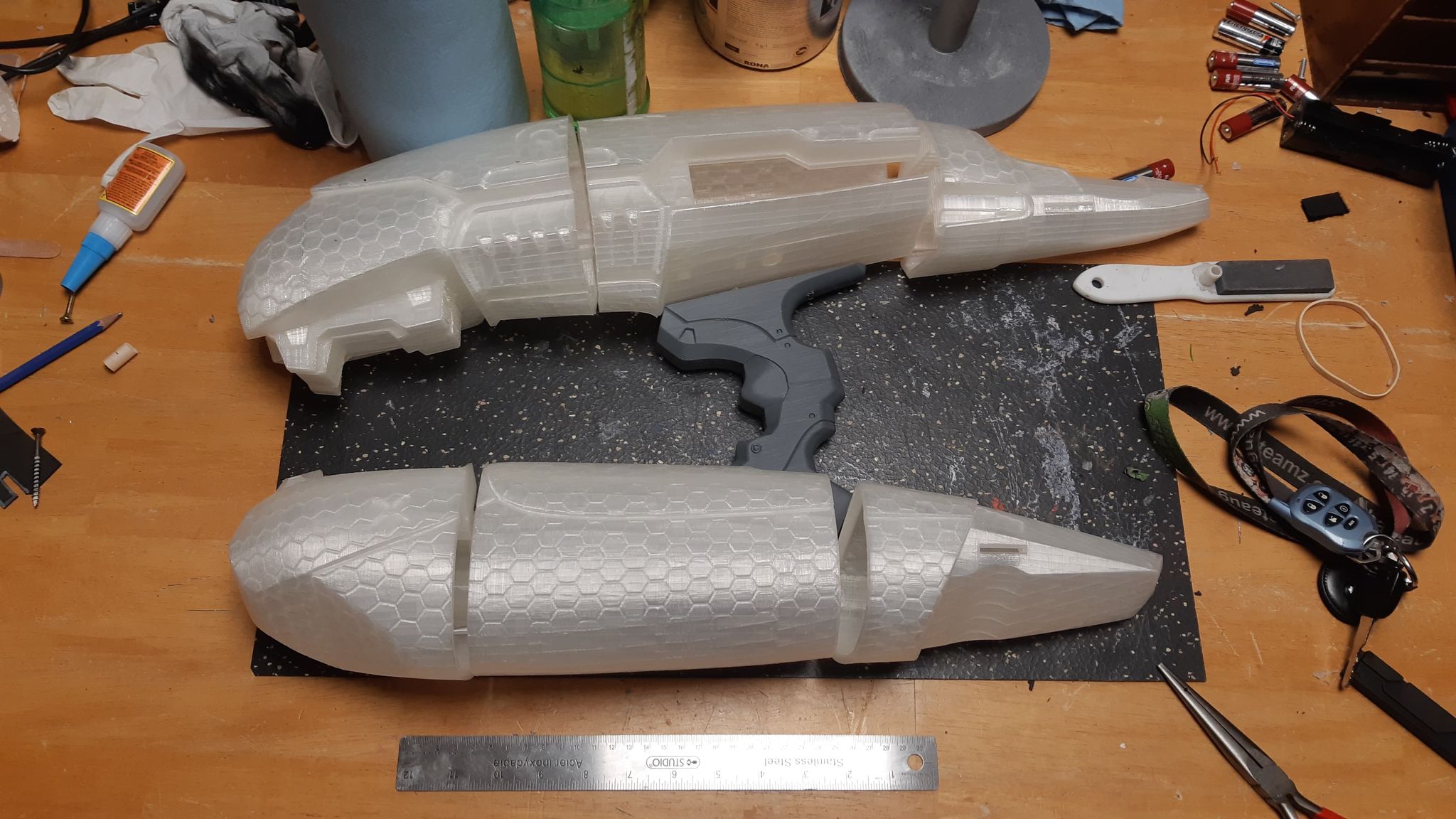 fast foreward a few days and the wirering was complete! giving us this! 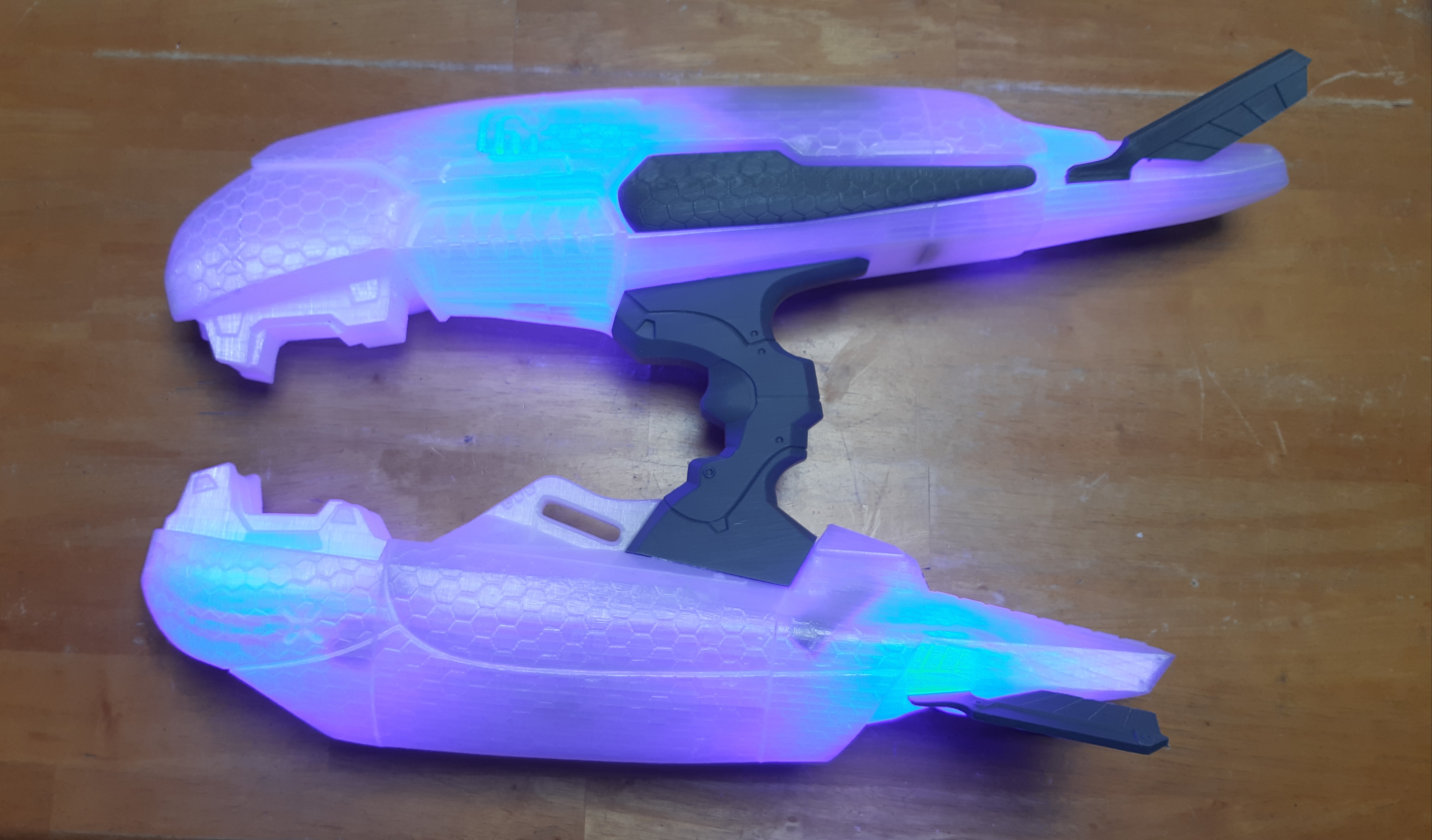 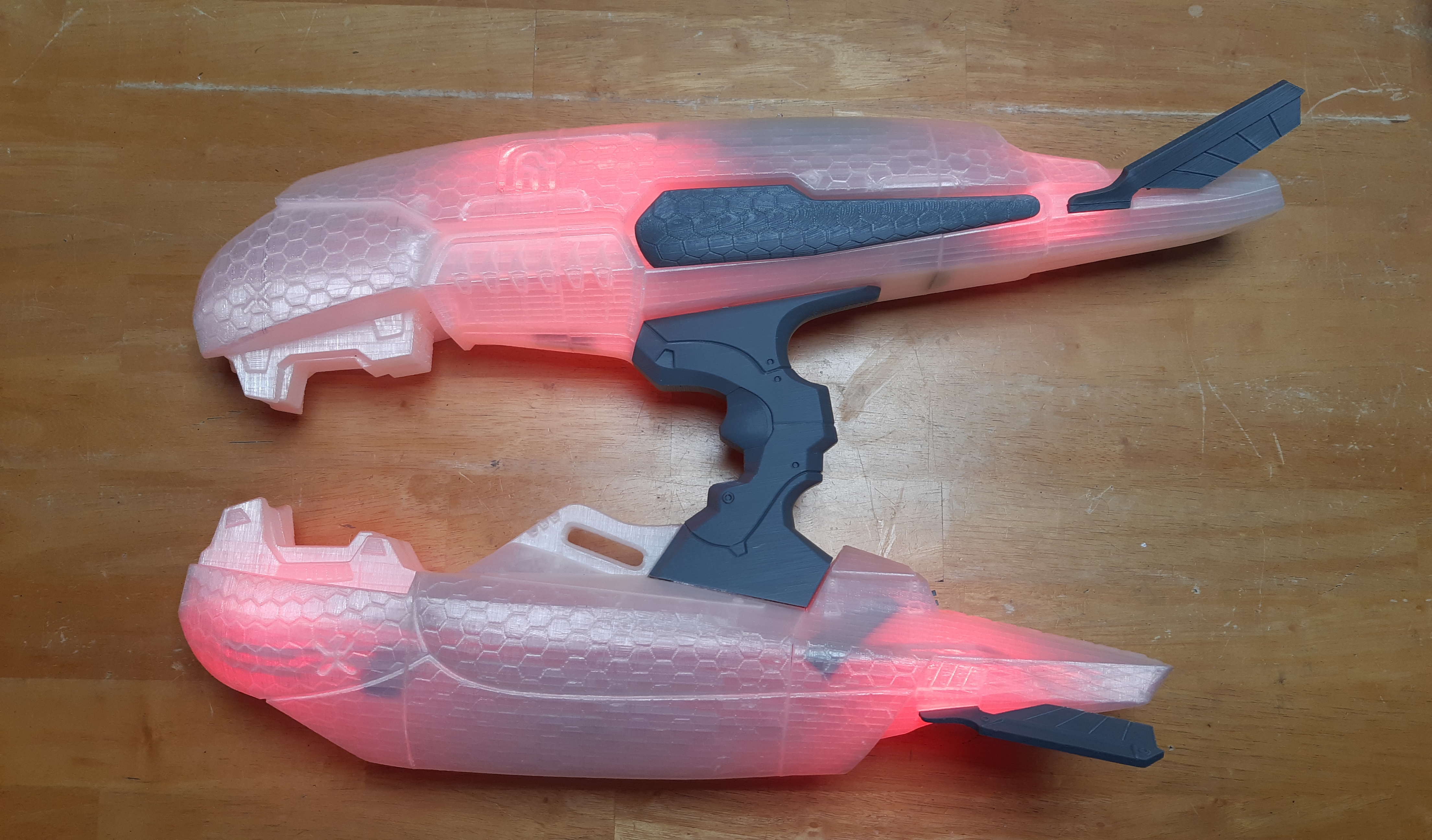 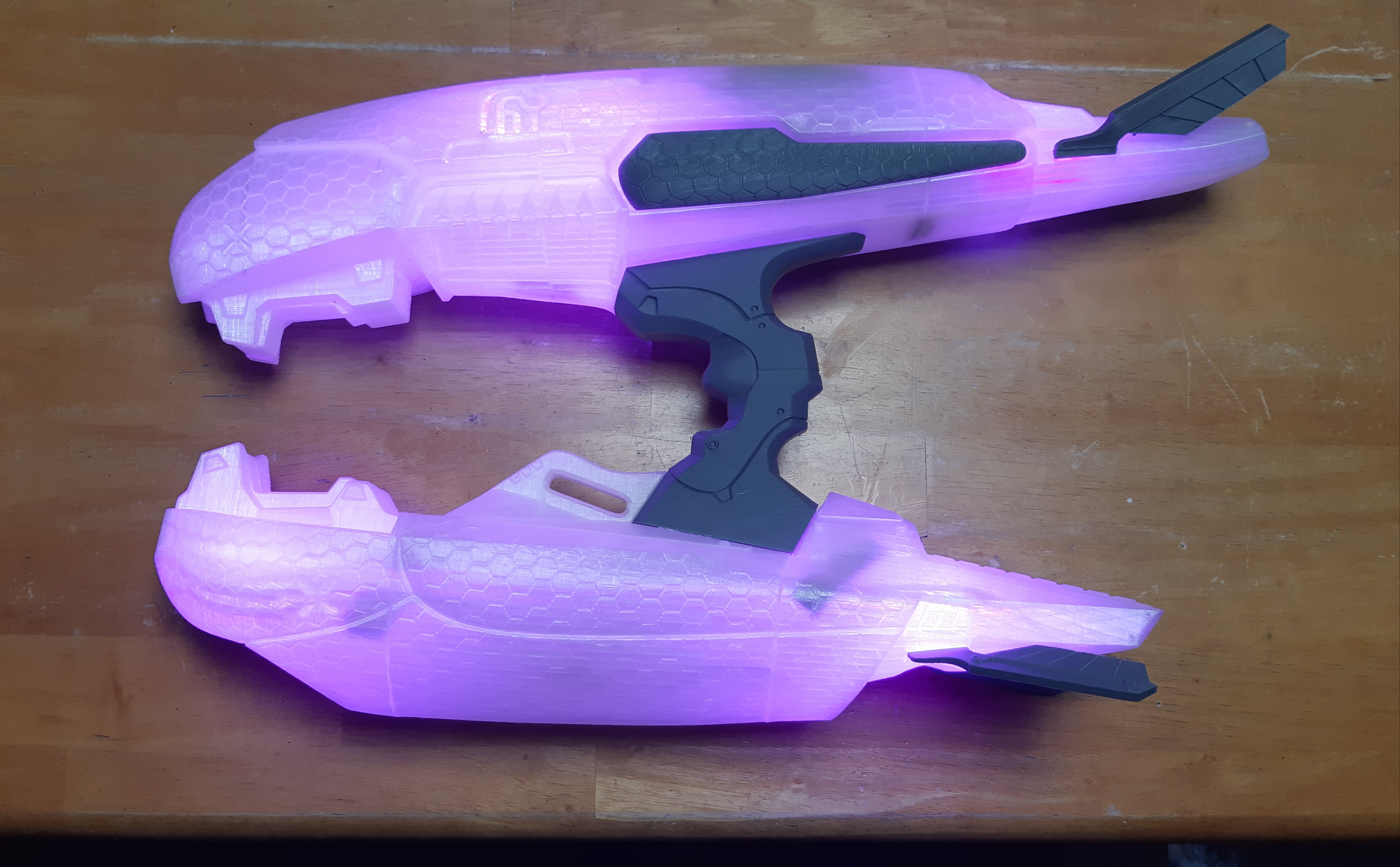 the purple glow is simply an enjoyable side effect of having both circuits turned on at once! the LED strips were strategicly placed to mostly illuminate only the part that actualy had light. in an effort the reduce heat buildup in the prop and reduce power draw to the small battery.

the next step was to start the sanding process, this project was initialy a collab with Felipe06 so he took over from here, starting to apply bondo glazing putty in strategic locations, doing his best to avoid filling up the hexagons... *foreshadowing* this was in an attempt to simplify sanding as we werent fully sure how to tackle this detailed beast.

furthure more, some custome masking decals were cut in vinyl to cover any part of the prop that would actualy need to light up. 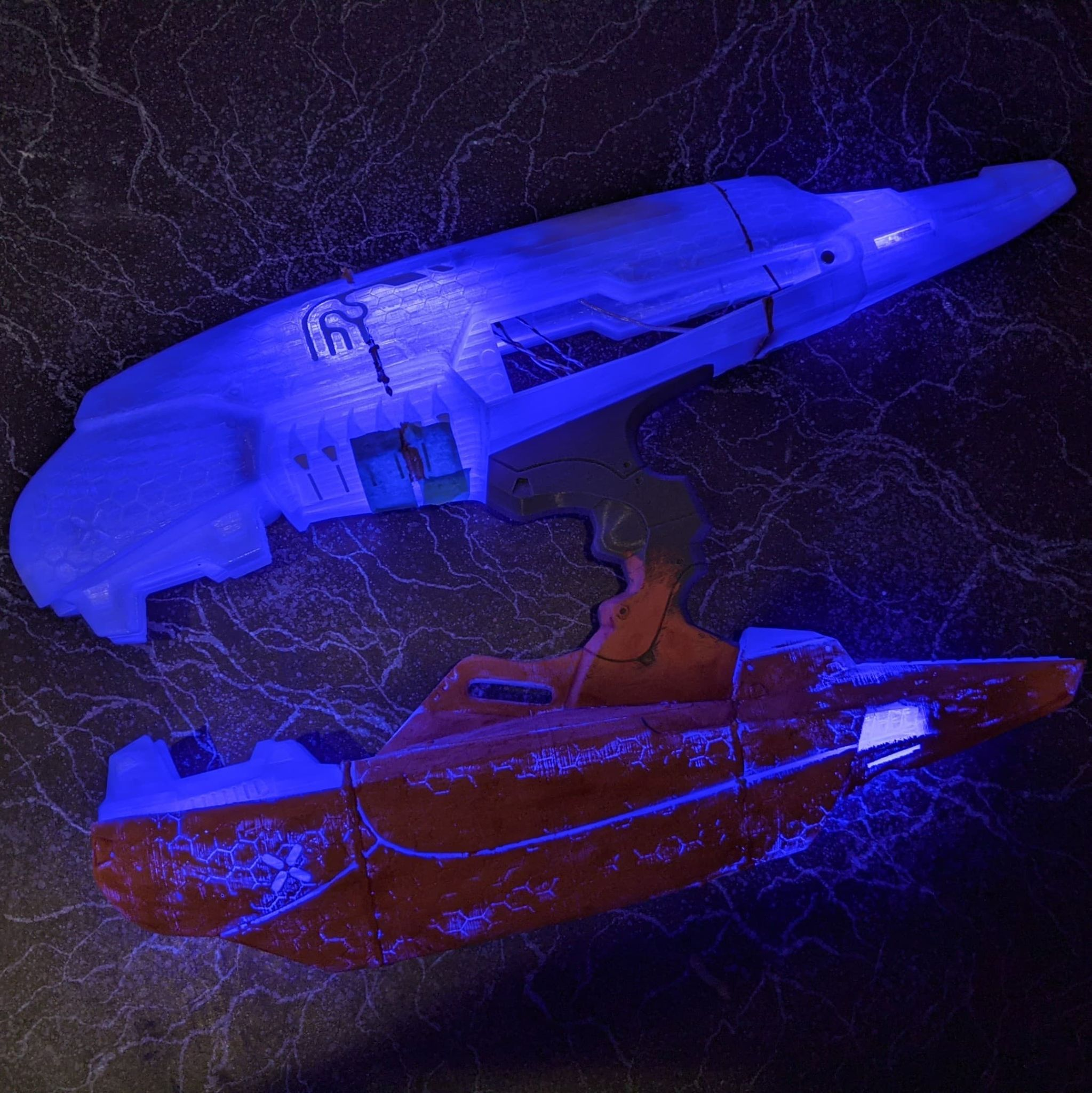 it is at this stage that the project was shelved, covid years being unpredictable as they are, stuff happened and neither of us had the time to work on any of our projects due to school and work.


fast foreward 1.5 years, to about a month and a half ago, we had the confirmation that the New Montreal Battalion would have a Booth at montreal comic con, it was time for me to dust offf this project and finish it to have it on display during the convention.

remember i mentioned foreshadowing... yeah, that technique did not work, even the small amounth of putty that made it into the hex grooves, made then mostly dissaper. i had to take my vinyl cutter weading tool to scrappe away the putty. needles to say, my hand was in pain and sore for 2 days. no out of 10, would not recommend... 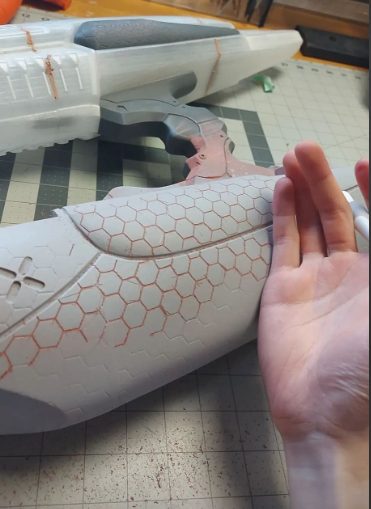 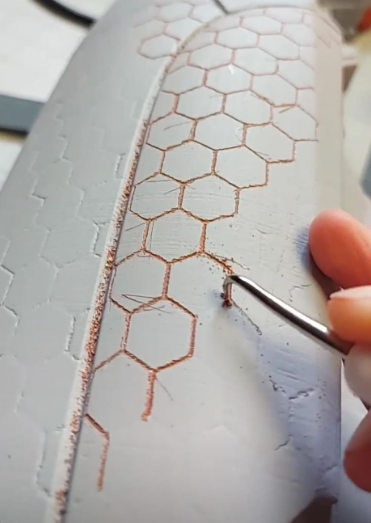 this was done for the whole prop...

once the sanding was done, here are the paints that i found were compatible with each other to give the glossy candy coat effect. 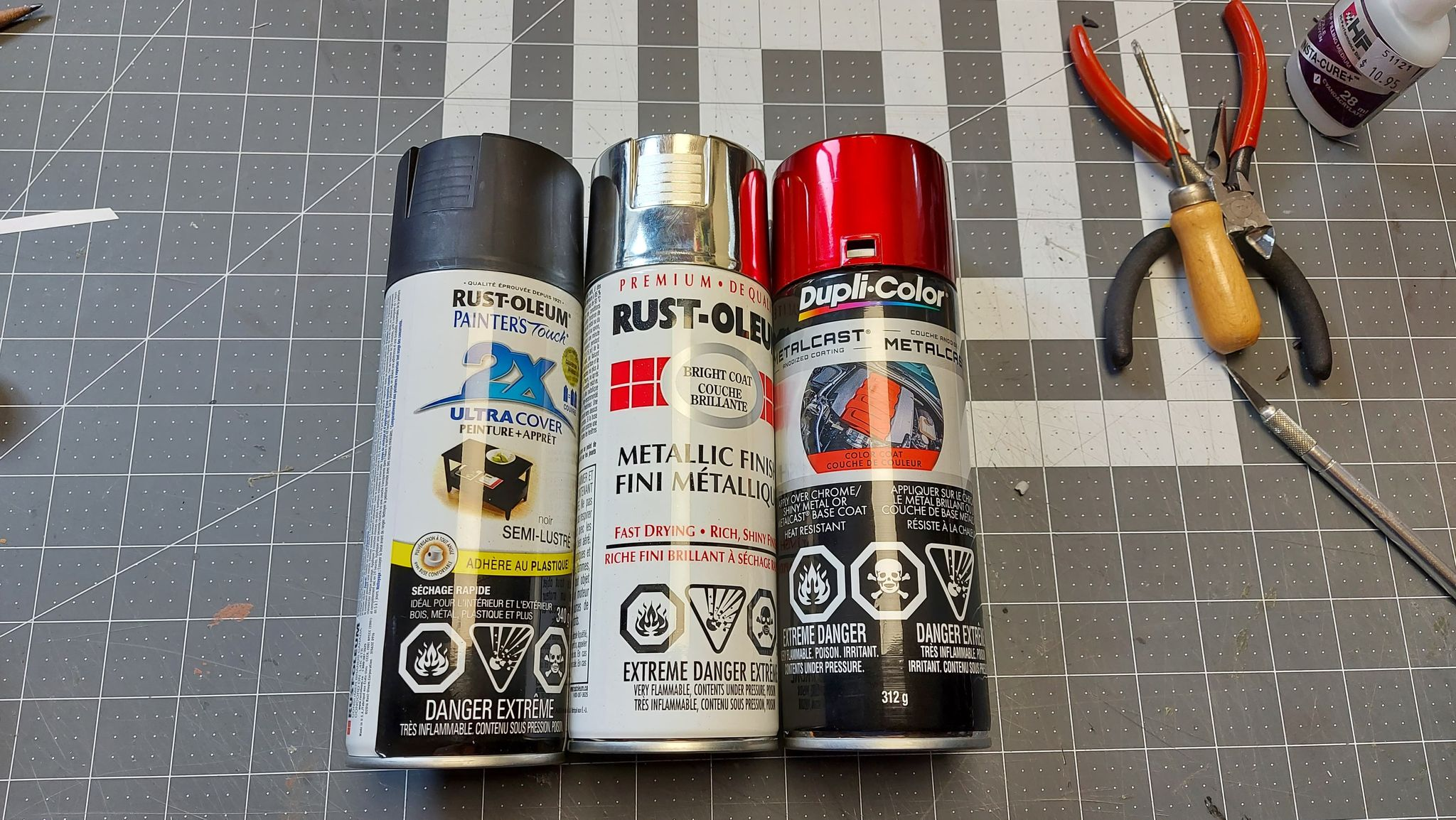 each coat were given about 24h of dry time. this was the result of my test. (i hade done more test on a scrape peice of plastic before hand) 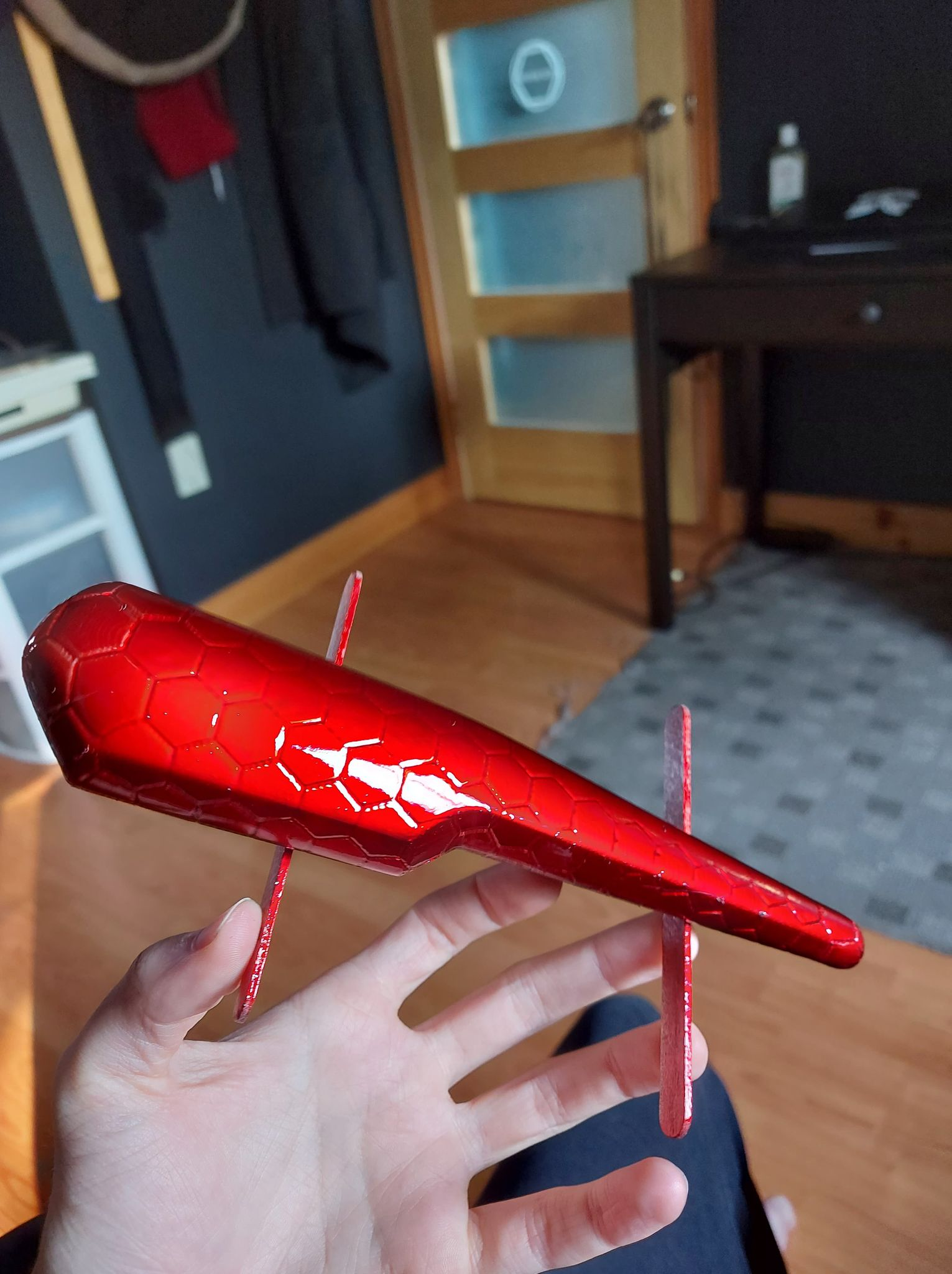 so i moved on to painting the whole body of the prop, starting with the semi-gloss black. i know my sanding job is no flawless, but i am tight on time for this one and i dont mid it too much as long as its not super noticable. plenty good enough for me! 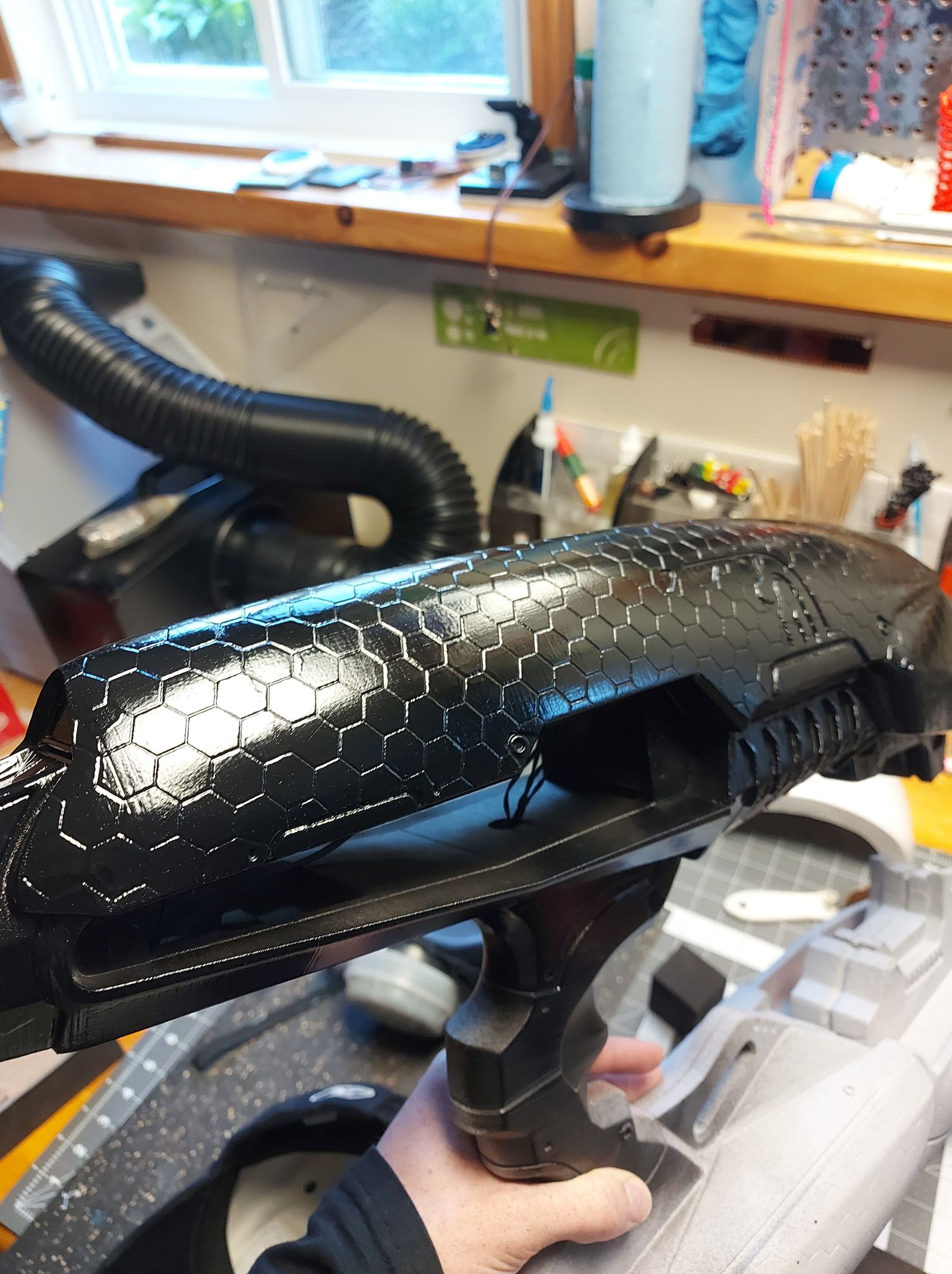 the chrome and red tint are the more sensitive to masking tape, so they had to be last. so i painted the handle first with testor's metalic model paint and an airbrush. no pictures in progress sadly, i forgot. it was mainly a big masking job.
this is right before the chrome needs to go on (IE this morning!) 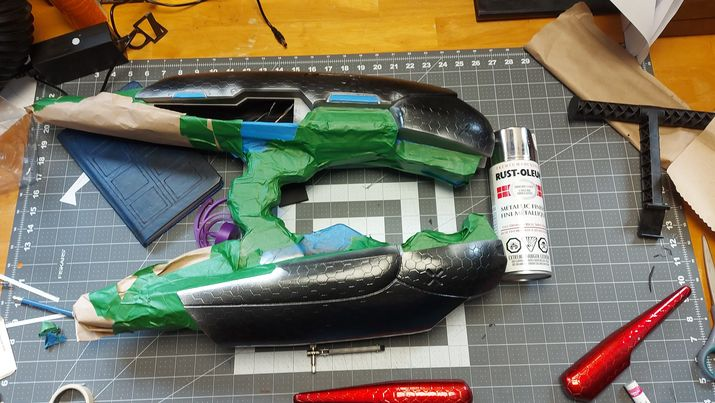 but as i was starting the tube connecting the nozzle and the valve of the can split, spraying paint my way. this is a very good exemple of why it is crucial to wear a respirator, gloves, long sleves, pants, and safety glasses, EVEN if you have glasses like me, spaypaint is no joke on glasses. in the heat of the moment and my frustration i didnt take a picture for you all's enjoyment, sorry.

this is where i stand at this moment in time, after getting a new paint can. 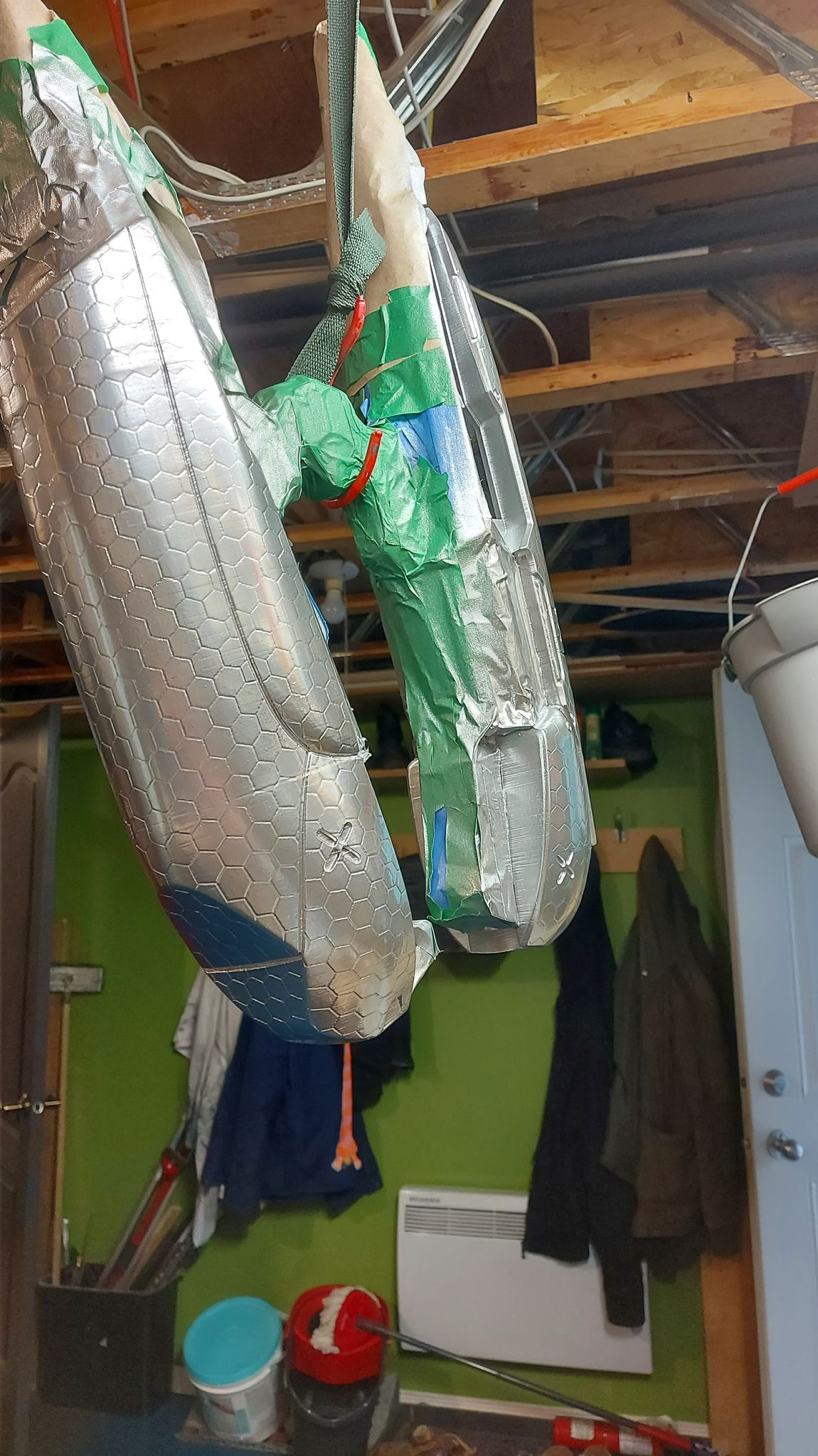 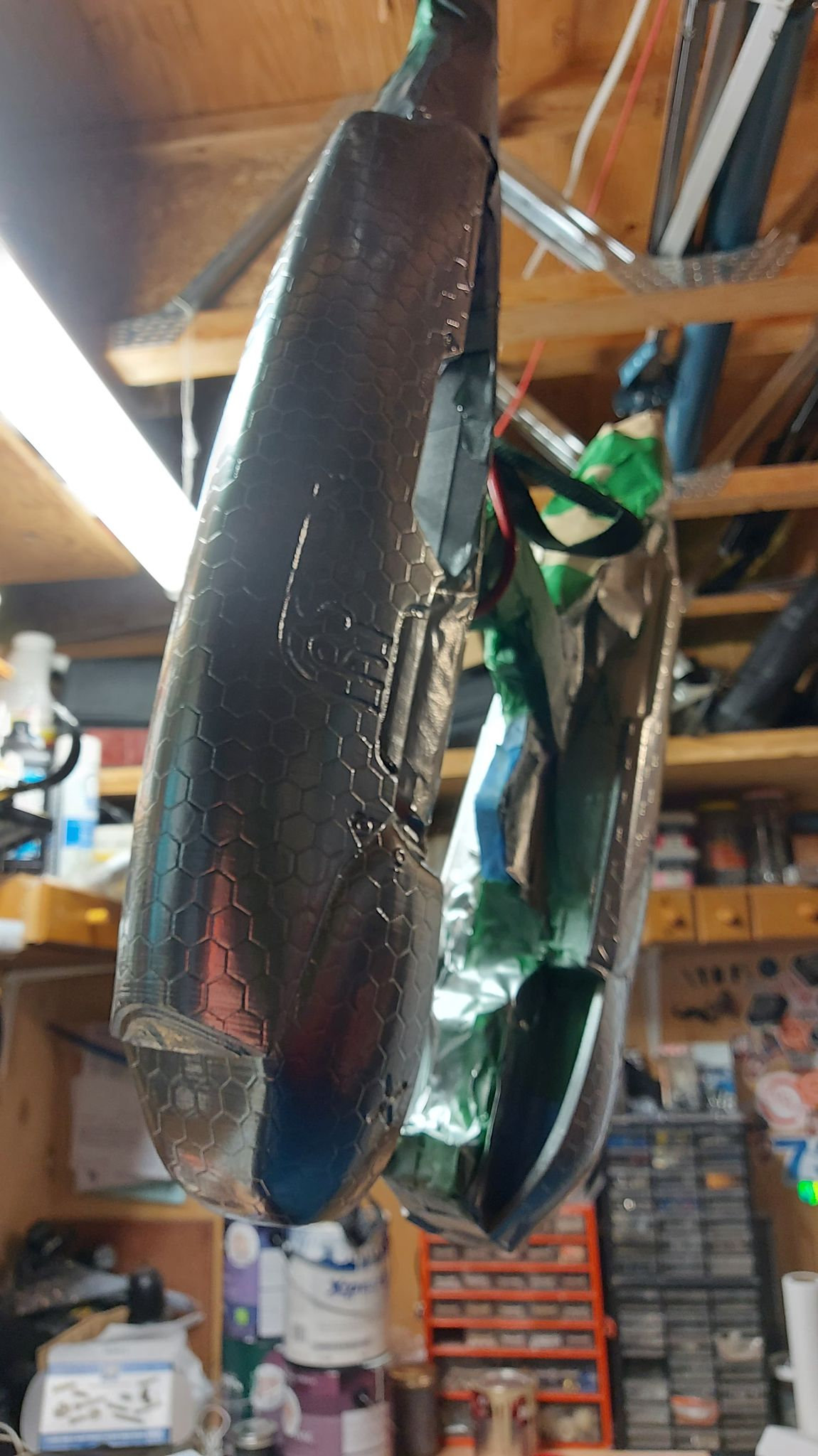 see you all in a few days! let me know if you have any questions!
-Zach

Colonial Regiment
This is absolutely incredible! I cant wait to see it finished!