Mountain Regiment
Been having lots of printer issues, it looks like bad adhesion but it's actually severe under-extruding in disguise. I had followed a guide to better calibrate my printer and tweak my flow rate and it has ruined the first layers and made all my prints super brittle since, so I'm probably not gonna keep the setting. Also had the filament spool fall onto a printer mid print in the second pic lol 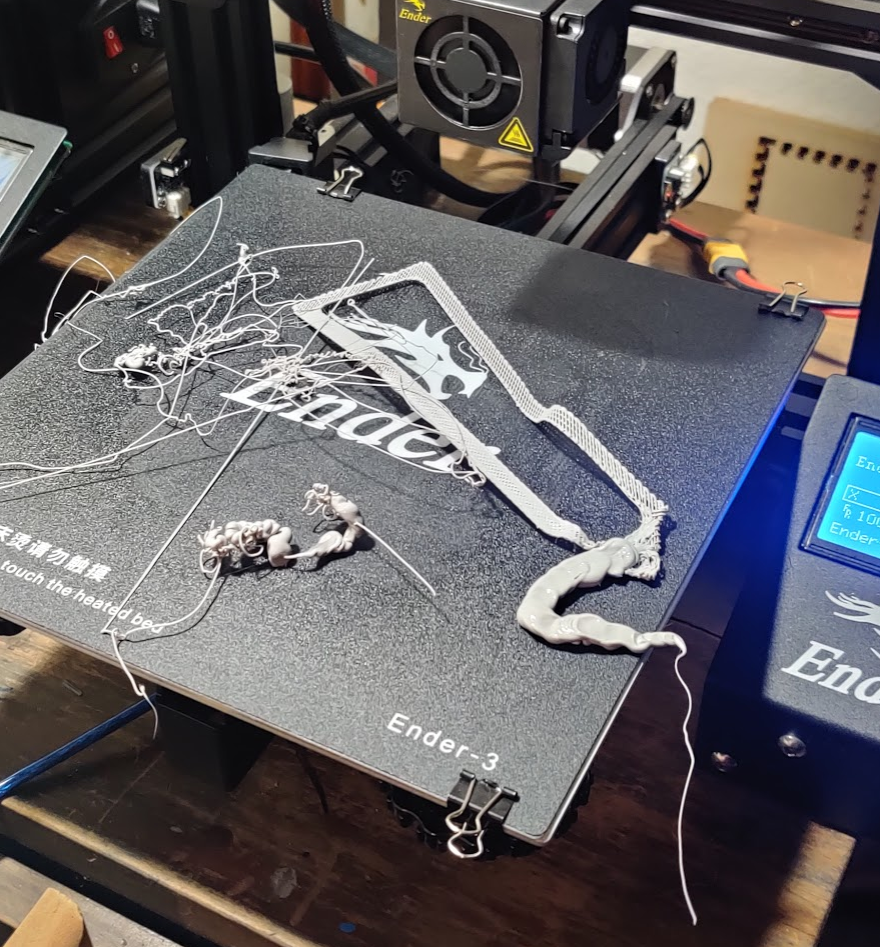 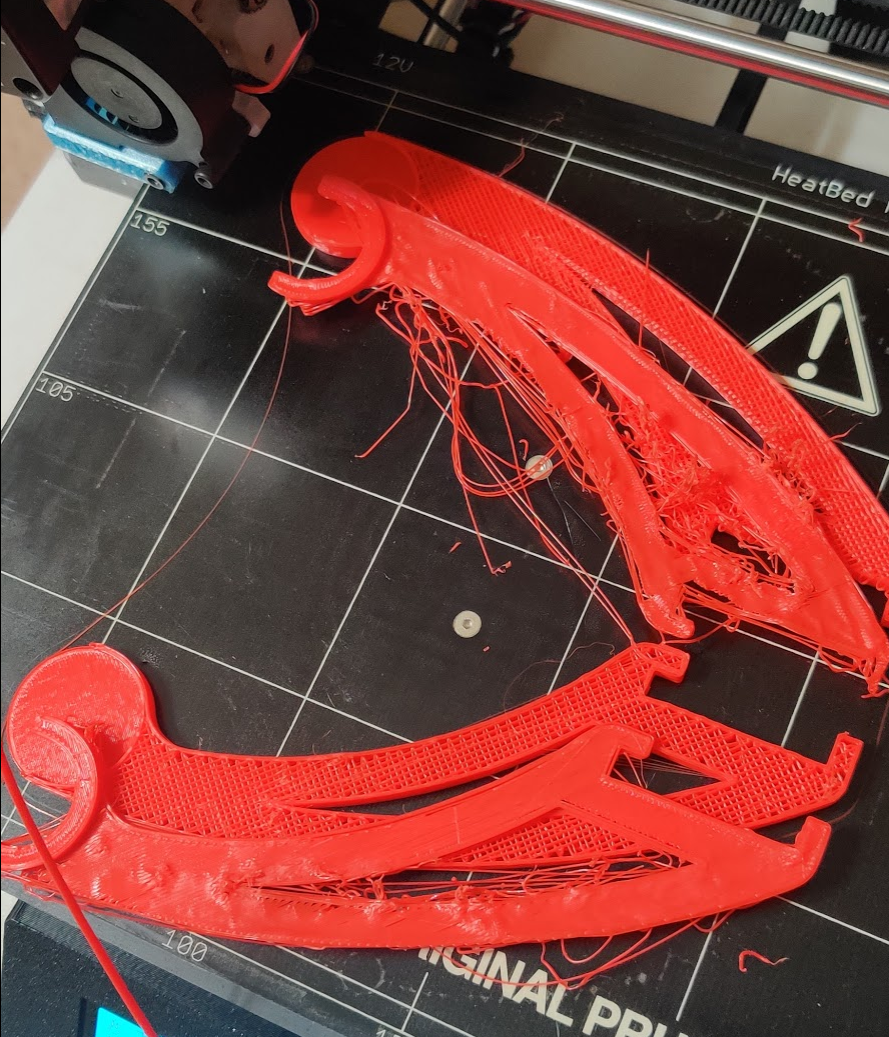 Mountain Regiment
Yo! All issues remedied, been grinding out on some lab research stuff but in the meantime I managed to sneak in a few smaller, less fun pieces to get out of the way.
(Abs, spine)

Here's everything so far 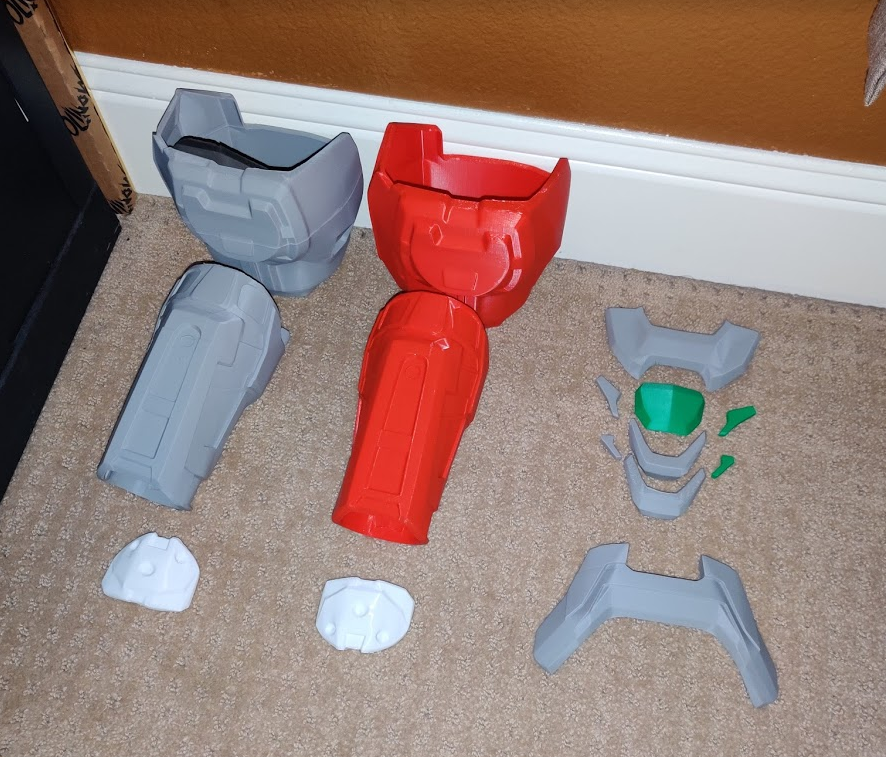 Mountain Regiment
Updated my armorsmith scaling and posed it a little to get an idea of whether or not it actually looks proportional, and I think it's spot on! (Other than the reach spartans being kinda vertically squashed)
Now I just need to decide what pieces to print next lol. 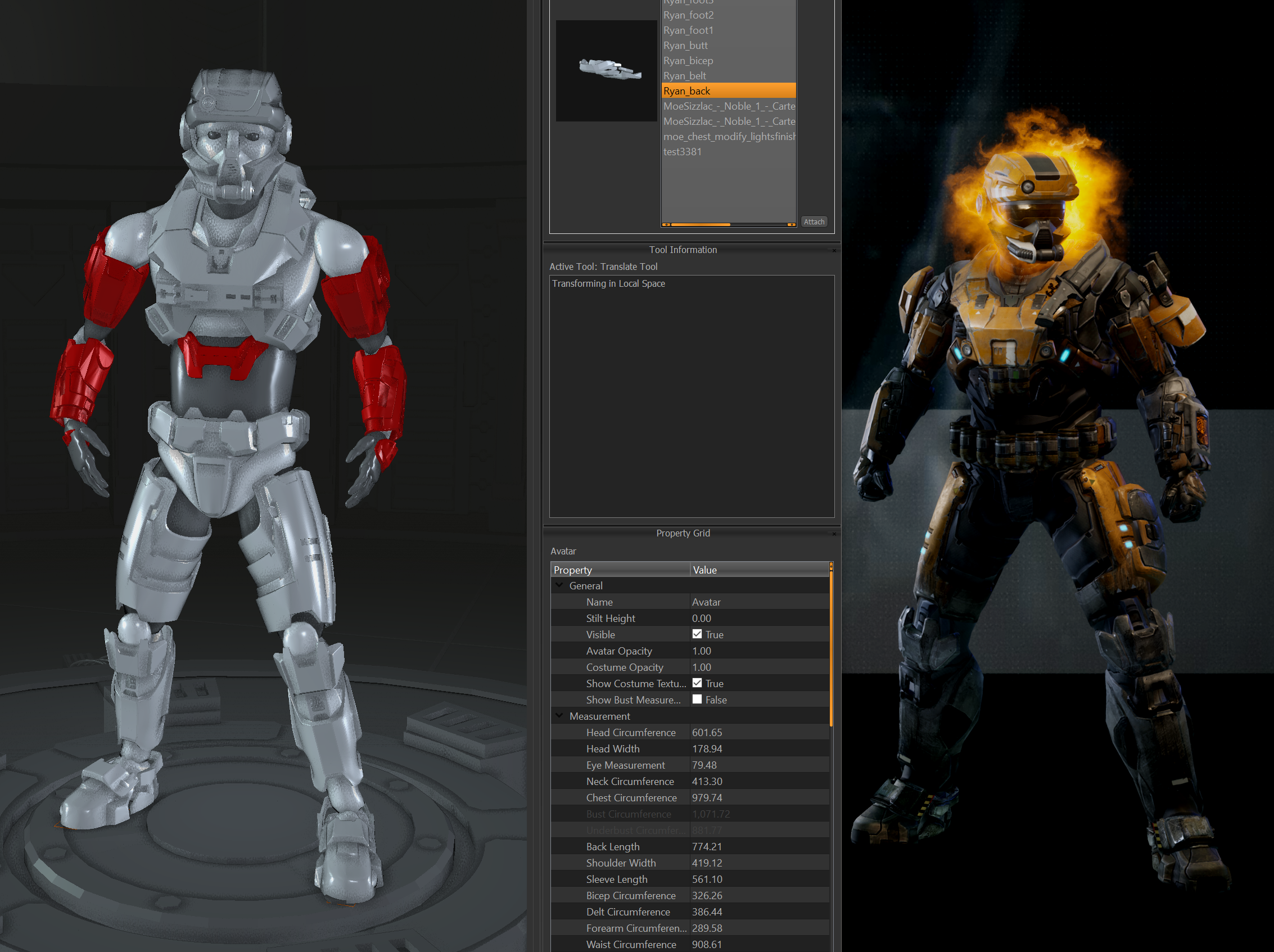 spitzkitz said:
Yo! All issues remedied, been grinding out on some lab research stuff but in the meantime I managed to sneak in a few smaller, less fun pieces to get out of the way.
(Abs, spine)

Here's everything so far
View attachment 304788
Click to expand...

I hope I'm wrong but do you have two left biceps printed? It could just be the angle of the picture?

Everything looks great though!

S225 said:
I hope I'm wrong but do you have two left biceps printed? It could just be the angle of the picture?

You are not wrong-- I am a certified moron! I hoped nobody would notice. It'll be the last piece I do lol but hey extra pieces for practice!

spitzkitz said:
You are not wrong-- I am a certified moron! I hoped nobody would notice. It'll be the last piece I do lol but hey extra pieces for practice!

Use it for stress tests and stuff! Ive broken a sweat running to my printer because I've started the same part before!

S225 said:
Use it for stress tests and stuff! Ive broken a sweat running to my printer because I've started the same part before!
Click to expand...

Lol yeah could do. I was thinking of using it for painting tests and the like

Well at least the tree support stayed lol. Gonna try this one again.

Mountain Regiment
Even more issues! Hurray! I tried to print the remaining portion (turns out that it actually just fell off the build plate and was completely OK to use the rest of) but I am having some random issues cropping up... so in the meantime, here is a cut up codpiece in case anybody looks for a good way to cut it in the future. I can't help but see that a lot of builds skip the "slicing my parts into smaller chunks" step so if you're like me and looking for some good "tried and true" ways of chopping bits up, here ya go. I'll probably do this for the rest of my pieces just so people can reference it in the future 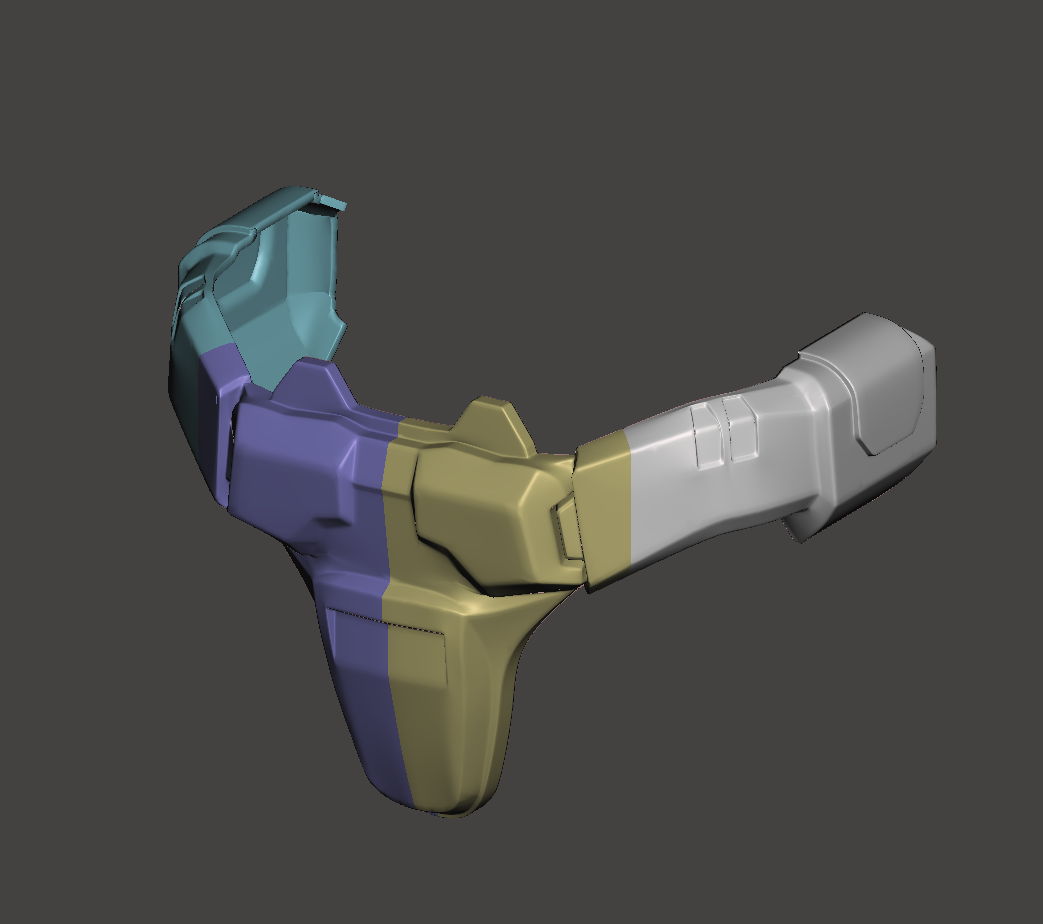 Normally split in half this would be fine, but it just barely fits past the buildplate so yeaaahhh.
also-- just finished my lab work as well so I have lots of free printing time! woo!

Mountain Regiment
Had a little build sesh with tahu505 ! 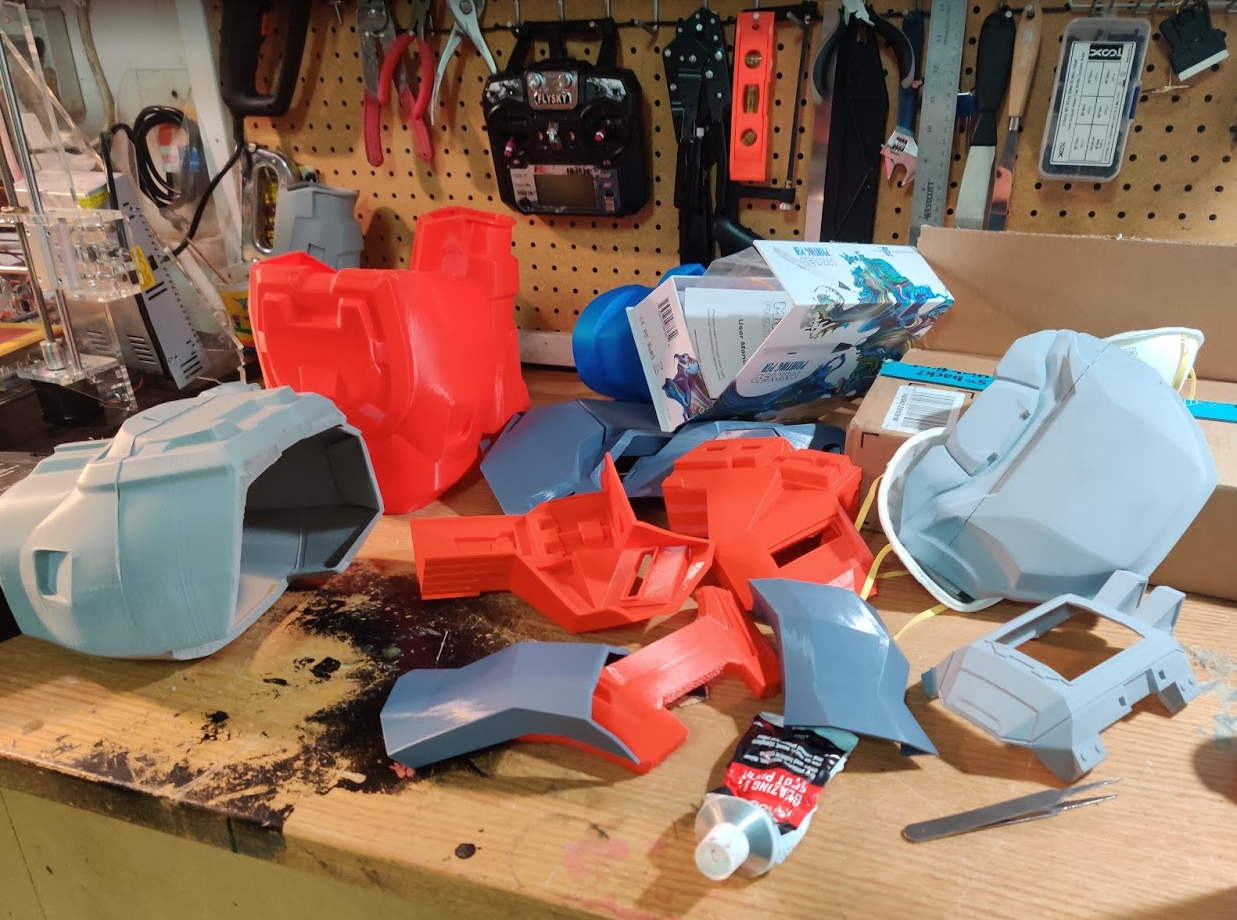 Some of my parts and his parts are mixed up in here lol but progress is progress!
peep that awesome tactical UGPS on the right there, too

Mountain Regiment
Yeah! Back on the grind!
Went ahead and edited MoeSizzlac's reach thigh model so that I can make the inner thigh from foam. Hopefully this will give me more flexibility and reduce print time/material usage. 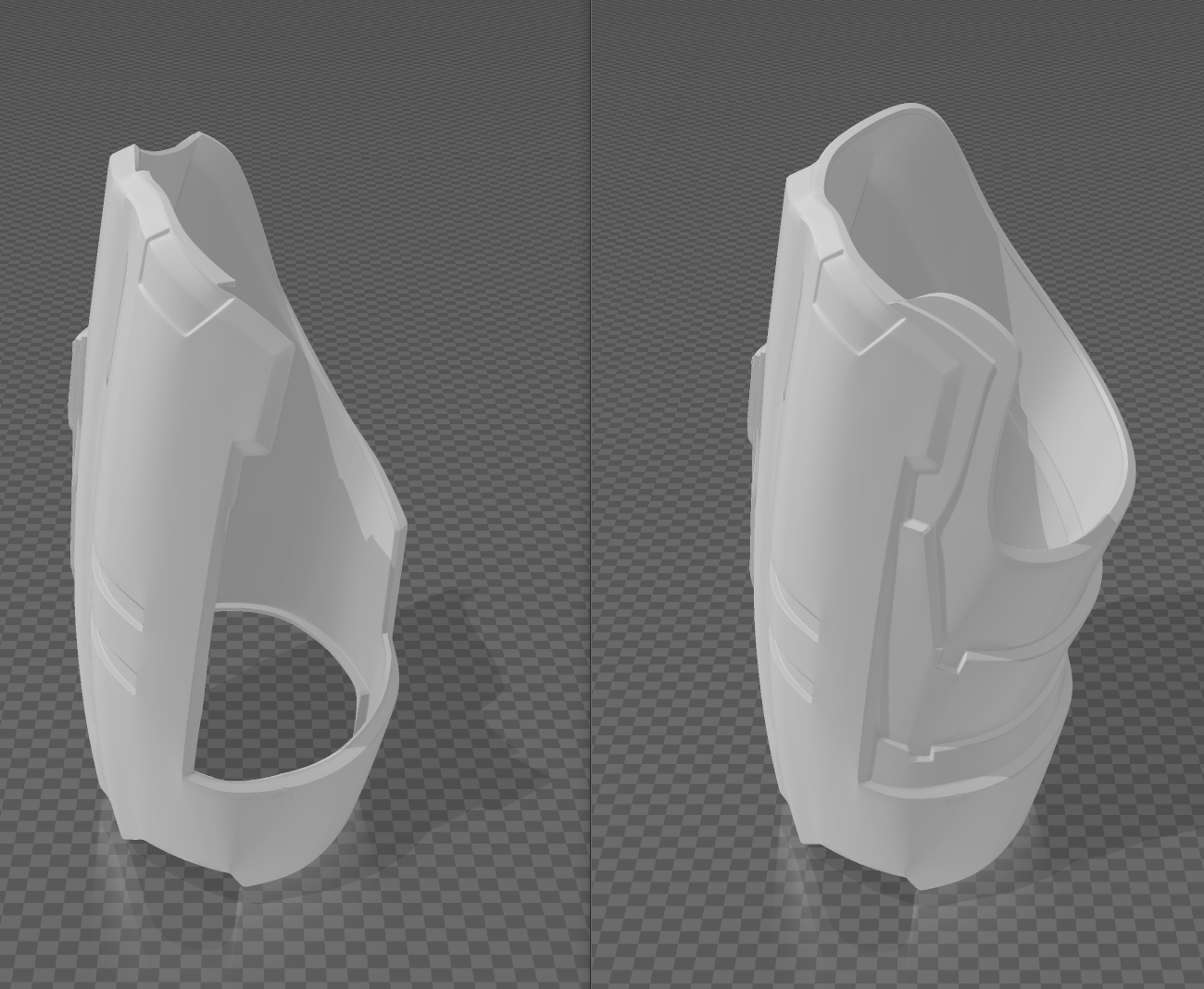 Also if you saw my Modeling Quest thread, I went ahead and did the Mark V B helmet as well. Still debating whether to do that or AKIS as my helmet...

My inner debate is this: Doing an entirely default Noble 6 would be awesome and recognizable, buuuuut I like the AKIS a lot. It's got that mythos going on yaknow? And that would at least let me make some other armor bits (though this would add time of course, and im not sure if that's what I want LOL) 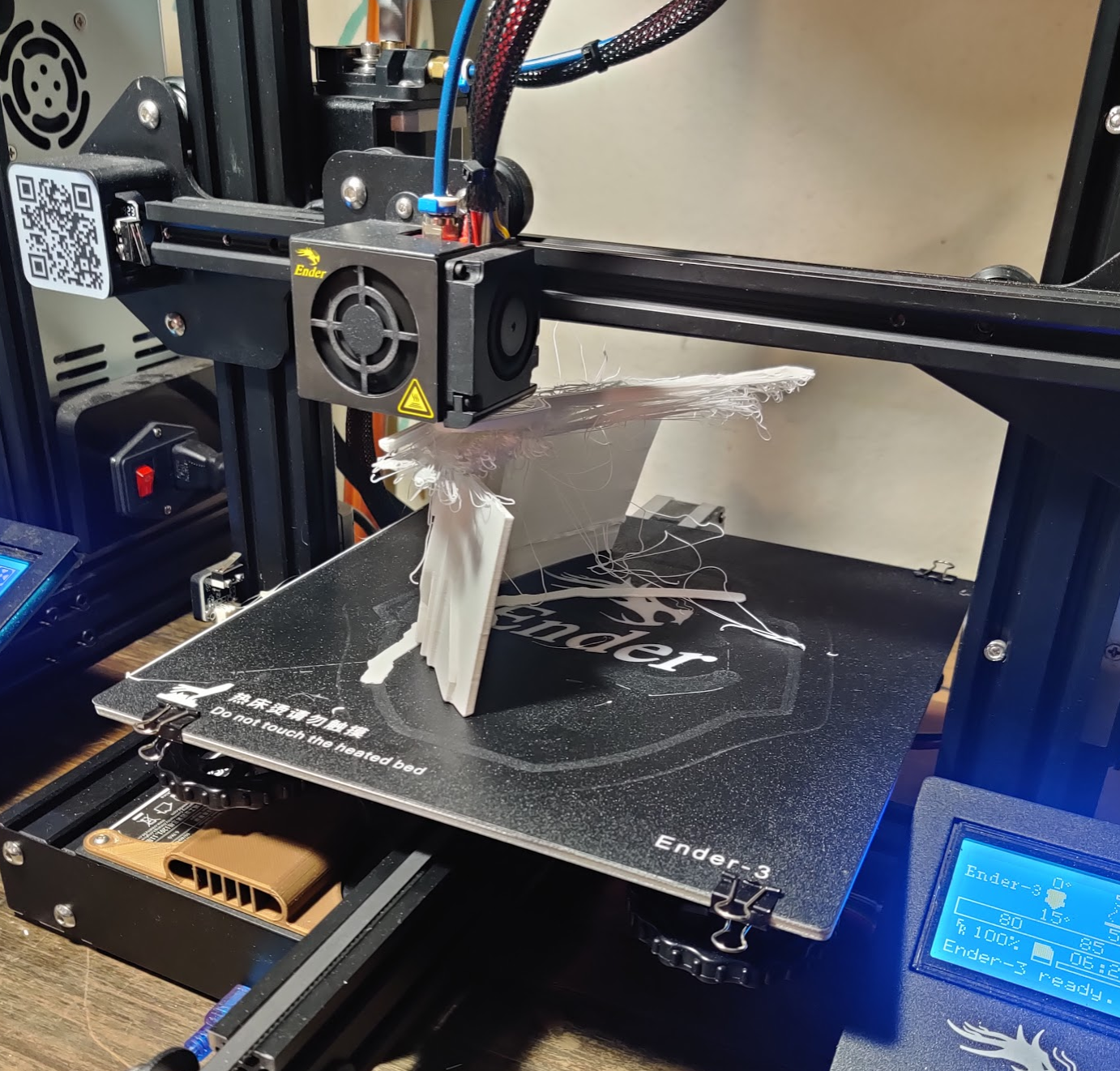 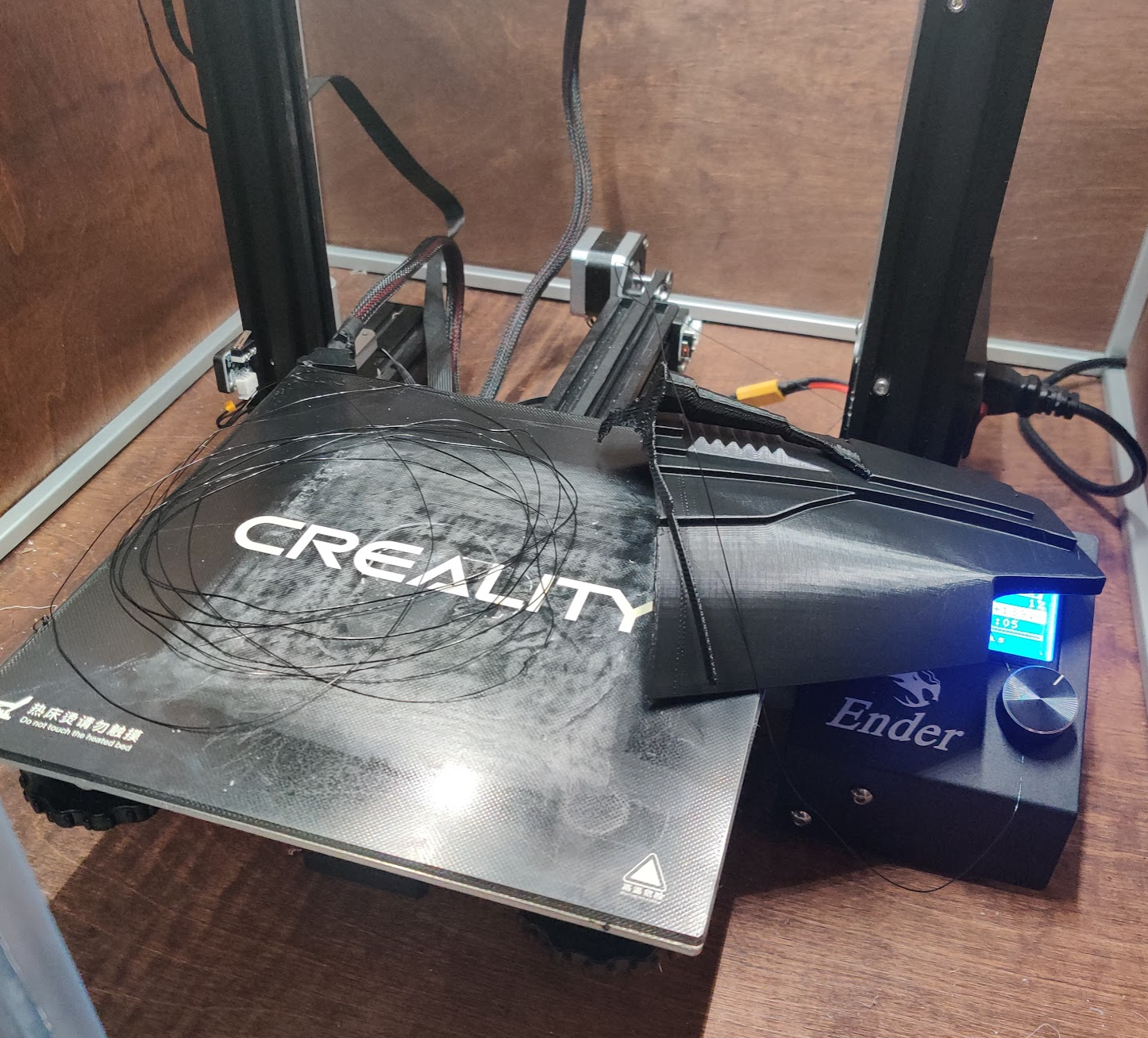 gonna have to increase my adhesion somehow, I think dust has been gathering. A good clean will do the trick.

Yeah looks like a quick rubbing alcohol wipe would help haha. Also I know you said you were saving PLA+ for the helmet, but it does also have nice adhesion

tahu505 said:
Yeah looks like a quick rubbing alcohol wipe would help haha. Also I know you said you were saving PLA+ for the helmet, but it does also have nice adhesion
Click to expand...

The actual issue turned out to be adhesion not onto the bed, but on the print itself. It appears that they ALL fell off of their own rafts, so I will probably need to change the air gap (though Im thinking it could just have been a failure from a particularly cold night in my garage...)

And yeah, PLA+ goin to the helmet for sure.

Mountain Regiment
Well! It has certainly been a hot minute, hasn't it!

As I finished college and started grad school, I have been pretty busy. However, I just got the summer off so it's build time baby.
Lately I have been having some build days with tahu505, and then I got a hold of a bunch of electric sanders which made our lives MUCH easier. Using these and other methods we discovered the absolute magic that is sanding raw PLA before you filler primer it etc.,. Since I'd like to write a more detailed post on this (as mentioned in other threads we are calling it the Angus method lol) and also show the results, I'm gonna spare those details for now and instead show off what I was working on today: 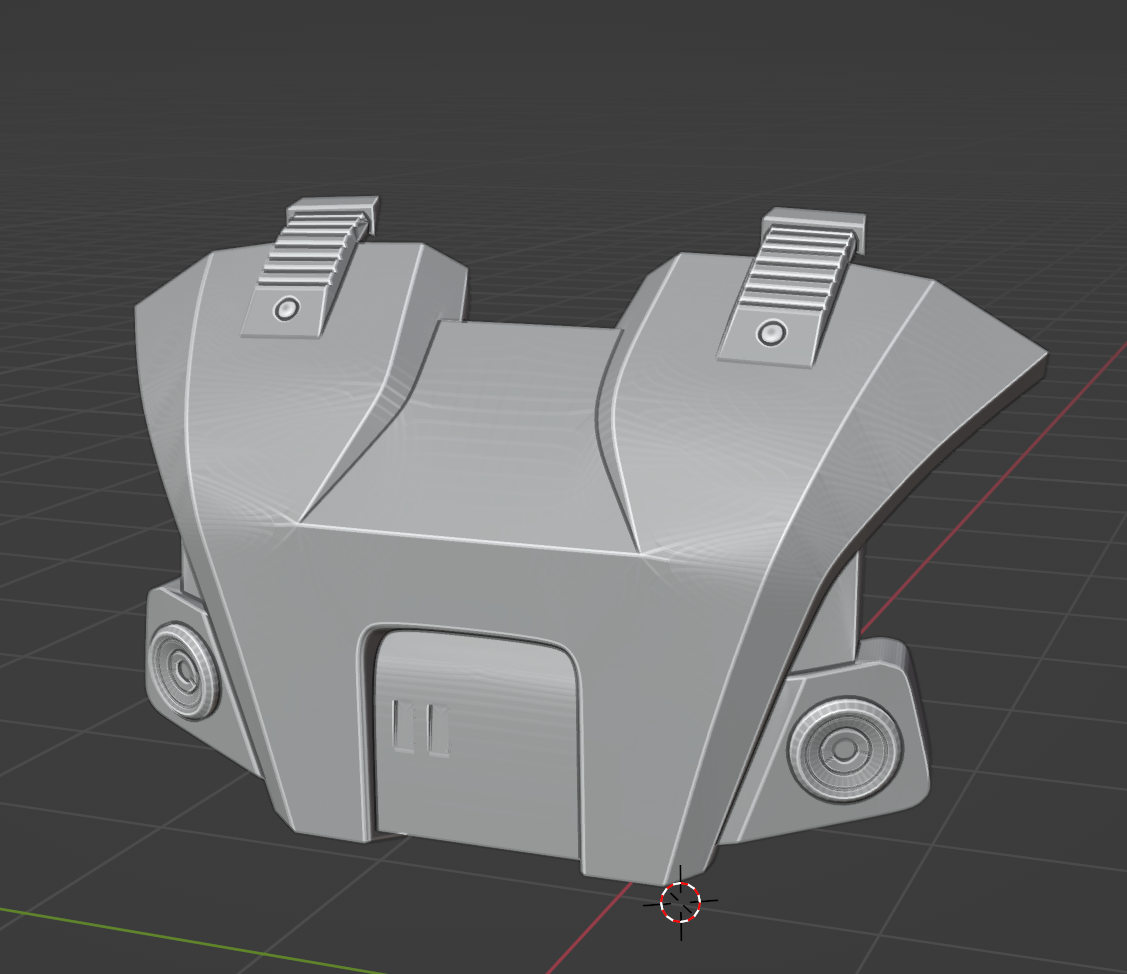 Yep! More modeling. Anyhow, I decided to change sorta last minute the chestplate I wanted to make to the base security. I was going to do the parafoil, but since I'm a big fan of the vertical striping on reach armor I just had to use this chestplate since it has one prominently on the right side. This matches the AKIS helmet well, too. Speaking of I haven't shown any images of it, but it is fully printed and partially sanded. I'll go through some photos here soon and post them, but for now just know it's almost there

And with that, I bring you an updated view of armorsmith featuring all the parts I have printed in red: 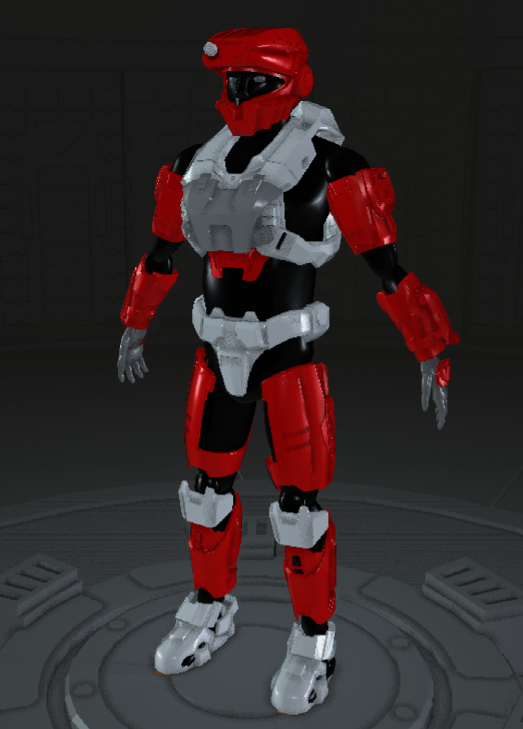 So obviously that leaves me with printing the chestplate, torso, kneepads, and the codpiece. The boot covers we decided would be best in foam.
I'm debating whether to merge the chestplate with the torso and print it as one piece, or if I will install magnets so I can swap it out and make it modular, but I'm not sure yet. If anyone has any ideas or warnings please do let me know what you think!!

I'll be updating this thread with some more photos later as I get the chance to take them. Until then!

Mountain Regiment
Wow! It's con crunch time!
With only 5 days sorta left, I have decided to finally start printing the torso. So, after pulling my hair out, I sliced it up like so: 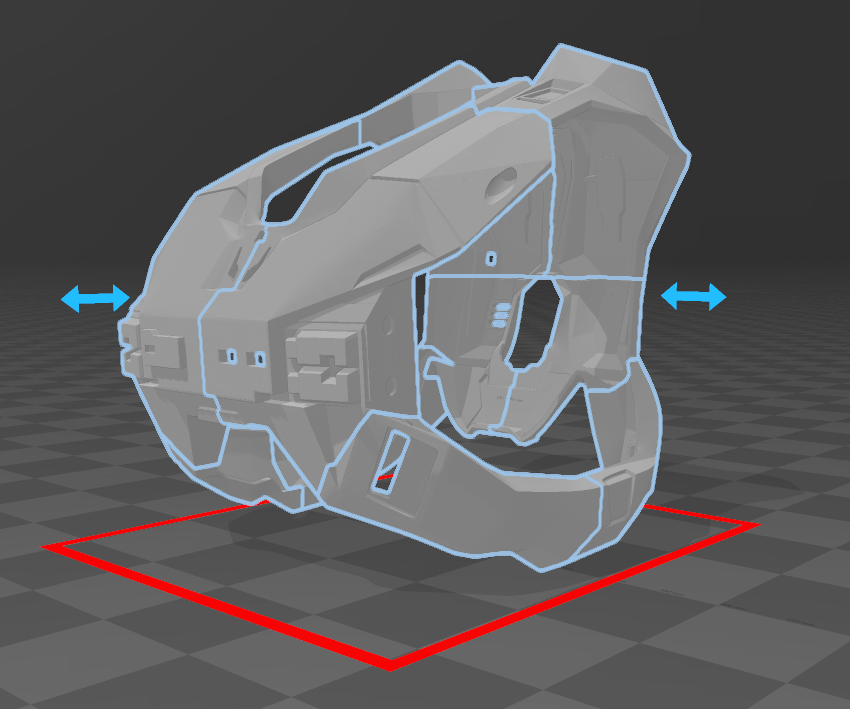 This will be all parts on Ender 3's except the front two bits which will fit easily on a CR10S5 and take about a day and a half each. Most ender parts take 1 day, with the smaller ones being 8 hours.
So, ideally, I will have the torso assembled and ready to sand in two/three days which means I will be ready to basically paint my suit in four. cutting it close!!
Now, time to start printing

Mountain Regiment
omg you guys, this is looking so good
like this is just primer
gonna wet sand at 600 all my primer pieces before I paint, but WOOOOO
stay tuned for the suitup! 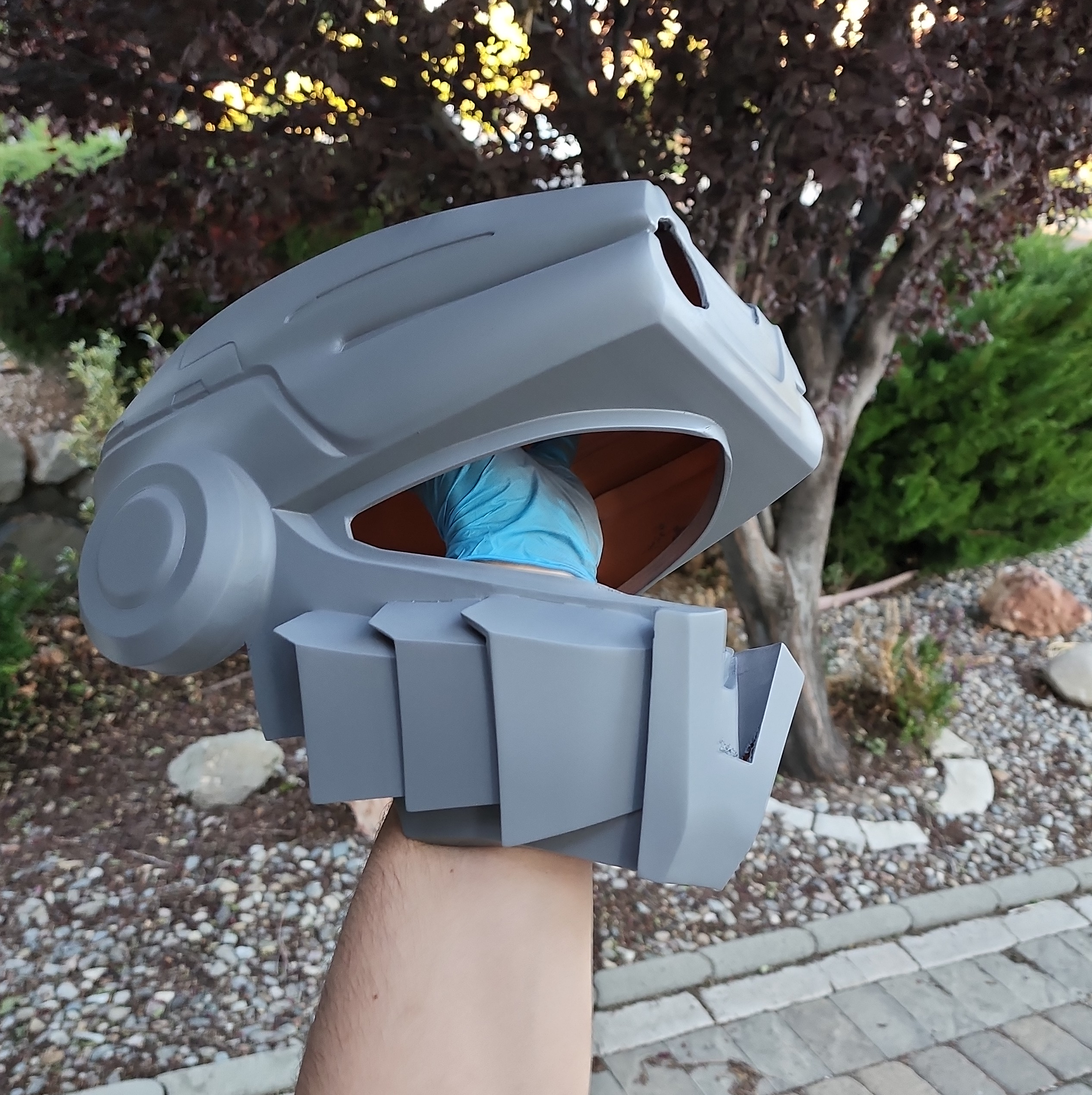