Southwest Regiment
a quick reference for battalion locations across the globe for new members to connect locally and get to know other nearby members.
Upvote 0

Battalions are optional, not required, Sub-units of Regiments. As such not every Regiment will have Battalions, only those Regiments that have decided collectively as a Regiment decided to form one. Battalions are therefore found within each Regiments section of the Forums. All you have to do is scroll down the main page of the Forums and you will see which Regiments have battalions listed, and what they are.

You could also just read through the Staff List, as each Regiment and Battalion staff will listed there.

The staff members listed below are all volunteers. They put a lot of time and effort into keeping this site running and giving us things to do in the real world. Take a moment to see who's working hard for you! 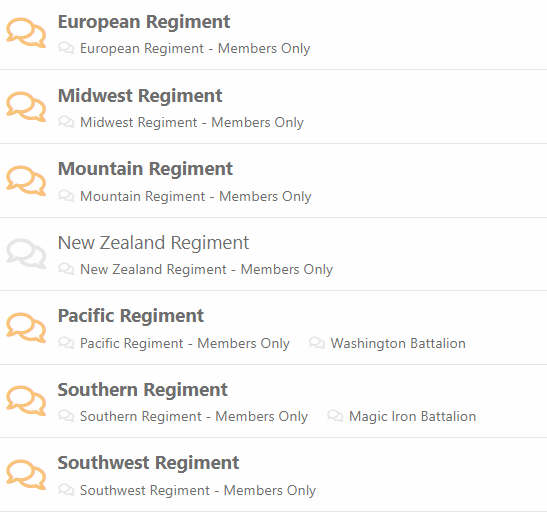 Southwest Regiment
thanks Cadet thought there would be more battalions. but found out otherwise. no battalions in the southwestern regiment. sadface as heck..

Southwest Regiment
Im not even in the regiment yet due to too few posts and not enough time passed.. but ill be around...

Southwest Regiment
Cadet i feel like i need permission to do this i would like to do an interest checking post on establishing a north central texas battalion. i asked redshirt in discord but they are afk... have a map establishing borders of the territory. even tho im not a ranked member or an official regiment member yet think its cool if i post it?

Brazen said:
Cadet i feel like i need permission to do this i would like to do an interest checking post on establishing a north central texas battalion. i asked redshirt in discord but they are afk... have a map establishing borders of the territory. even tho im not a ranked member or an official regiment member yet think its cool if i post it?
Click to expand...

Only members of a Regiment may enter into discussion with the Regiment CO about forming a Battalion in their territory. Additionally, as I said, Battalions are optional Sub-Units that are only formed in the case of a portion of the Regiment being active/busy enough with events and appearances to necessitate the forming of a Sub-Unit to take some of the organizational burden off the Regiment CO. They are not formed to formalize a Friend Group or Clique, as an excuse for more Merchandise, or simply just to Form one because another Regiment has one. Battalions are formed out a need, not a want.

Once you are a full member of the Southwest Regiment, if you see a high degree of activity in North Texas that would call for a Battalion to be formed to help take some of the Event Organization stress off the RCO, then you may begin discussion with them.

I believe a battalion needs "deployed" members in order to form. Anyone can join a battalion, but to form one you need 5 members with completed suits that have submitted for deployment.

You might be getting ahead of yourself Brazen . You should focus on finishing your suit, then start attending local conventions to inspire others to make Halo suits. Good luck and happy building.