Hey guys, here’s my very first build: Agent Washington from Red vs Blue! Huge, huge thanks to demolition/Robogenisis/crackhead09 for the foam pep files, and to HaloGoddess for the scaling tutorial.

A little backstory on why I chose to do this half-build thing – tl;dr, I knew I wouldn’t have enough time to do a full build in the ~2.5ish weeks I had (which included Christmas and New Year’s), so I settled for waist-down. I know it’s kinda weird especially considering that most people here do full builds, all-or-nothing, but I started this piecemeal and I guess I’m ending it piecemeal, too.

I made the helmet in the fall in time for New York Comic Con, and if you’re familiar with RvB and RvB cosplay, you might’ve seen people around doing helmet-only cosplays and color-coordinating an outfit to go with (way less labor-intensive, plus it allows people to do really cool takes on a character’s color scheme via clothes), which is what I did, and I had a lot of fun with it.

I don’t actually have the helmet with me right now (I’m on vacation…… 2,500 miles away from home and making armor while on vacation) (and stressing out a lot about paint-matching), nor do I have any of what I’m going to wear (definitely not those shoes), so I’ll only be able to post up proper full photos after Arisia, probably. Here’s some helmet pics, plus a Halloween photo.

(Sorry for the awkwardly cropped photos, I don’t feel comfortable posting pics of other people or their stuff without them knowing.)

Doing just the waist-down is an extension on this whole sort of partial-costume thing – I’m going to wear that same jacket (and probably a plain gray shirt) plus the gloves I pattered about a month ago, and these legs. I got the idea for the half-armor thing from this lovely person, whom I had the pleasure of meeting at NYCC (also, check the #squad photo, everyone looked so great – I’m the Wash with my helmet on).

My gloves are just some $15 tech gloves from Marshalls I patterned with craft foam. I’m waiting until I do handplates to do any more patterning and/or buy new gloves.

It’s a pretty cool look imo, and I feel like with “non-Halo-canon” cosplays you’ve got a little more room to play around. I’m planning on doing the chest and arms this summer (hopefully), and I’’m thinking about making an extra set of biceps with my emblem on it to have a “Halo canon” suit, rather than a strictly RvB one.

Also, here’s my Magnum! This is just a repaint of the BoomCo Halo M6. I wasn’t even planning on having a prop, but when I found out about these things (and the fact that they only run about $12 a pop) I figured I might as well. My brother does a lot of model-making and painting (Gundams and stuff), so I just tossed this at him and let him have at it.

We added some magnets, so it’s got a good weight to it. I don’t currently have any magnets installed in the thigh, though, because I realized way too late that the ones I got are way too weak. Hopefully in the future I’ll be able to snag some rare earth magnets and use those instead.

All in all, I feel accomplished but overwhelmed, and very glad I didn’t try to do the whole suit in one sitting like this. I feel like I did a pretty good job for this being my first suit, and I learned a lot, which I’ll be putting to good use when I make the chest and arms. I'm also going to peel off all the Plasti-Dip and re-seal and re-paint what I've got so far, since I'm really not satisfied with how the PD applied, but until then (or rather, until Arisia) I've got some playing around to do as far as detailing and velcro goes. But yeah! I'm super excited about this and glad to be (mostly) done. 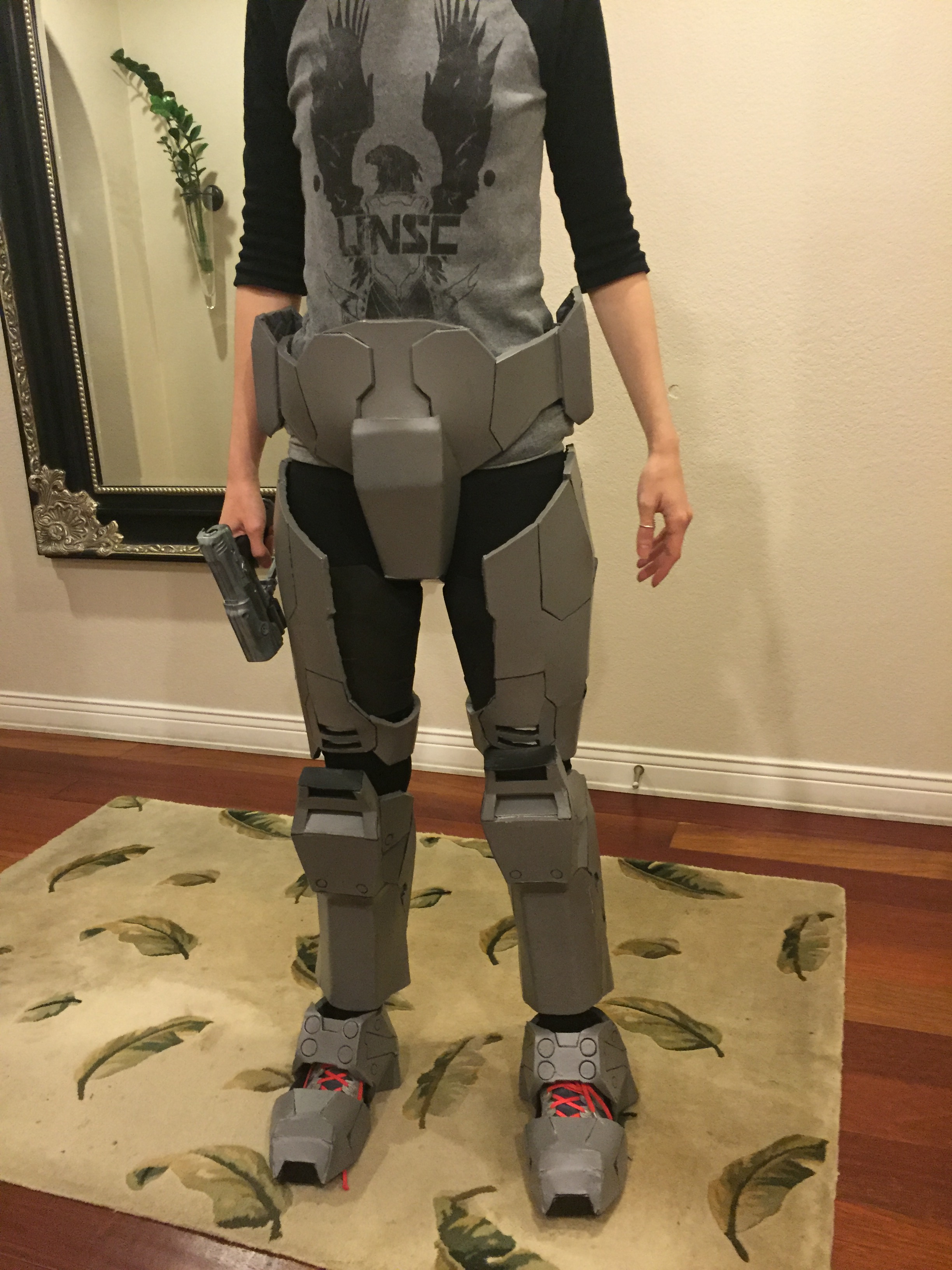 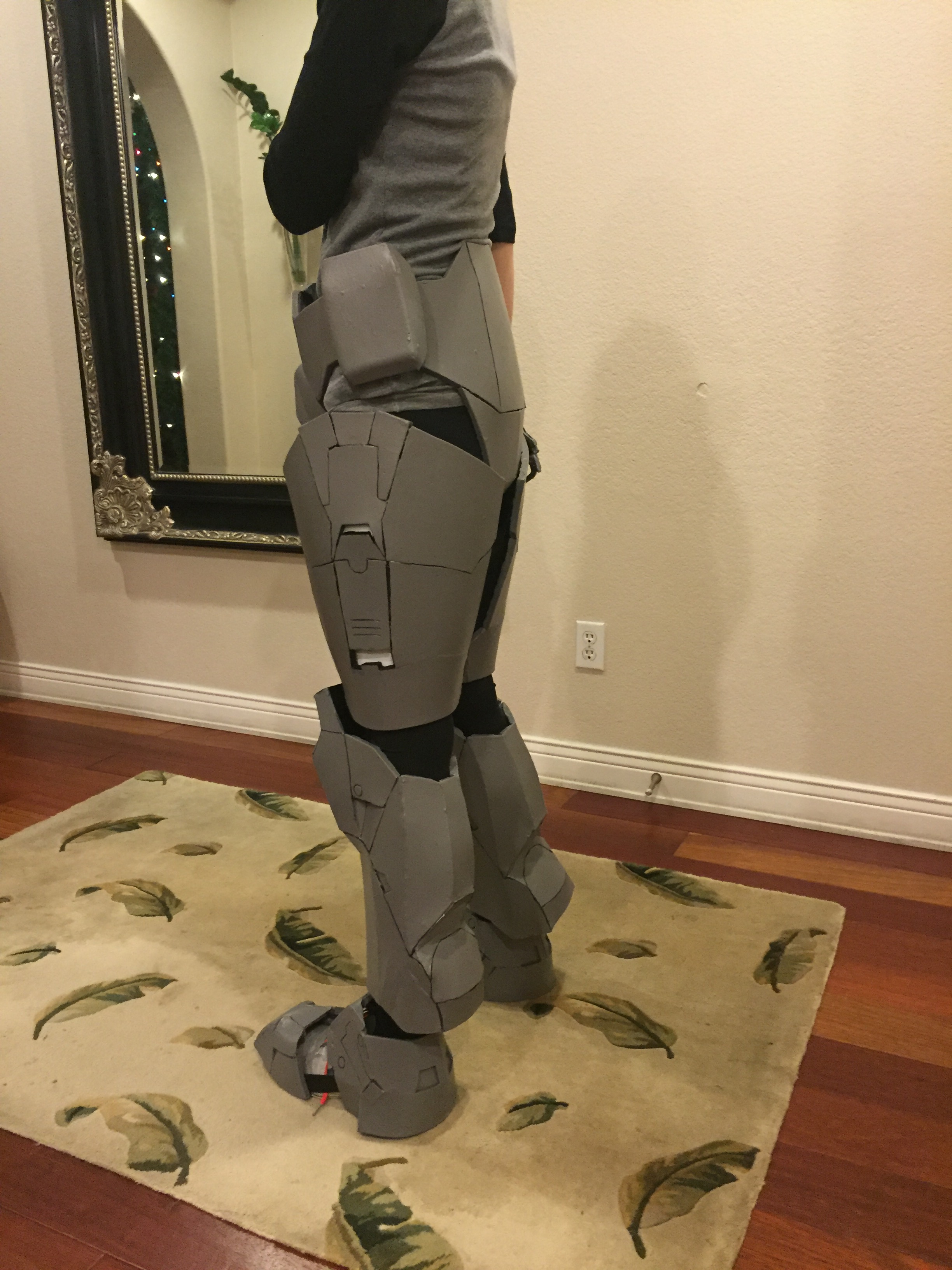 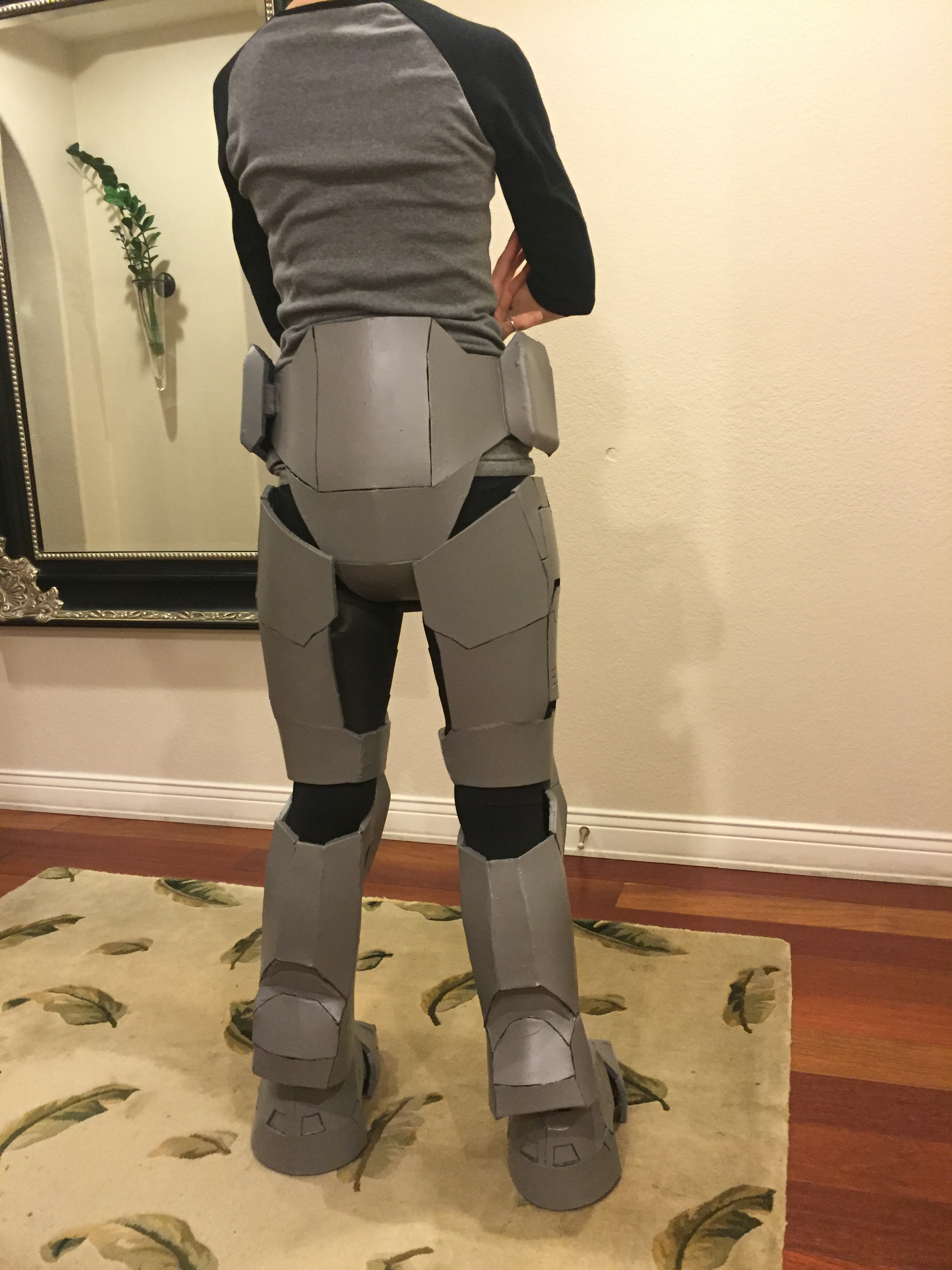 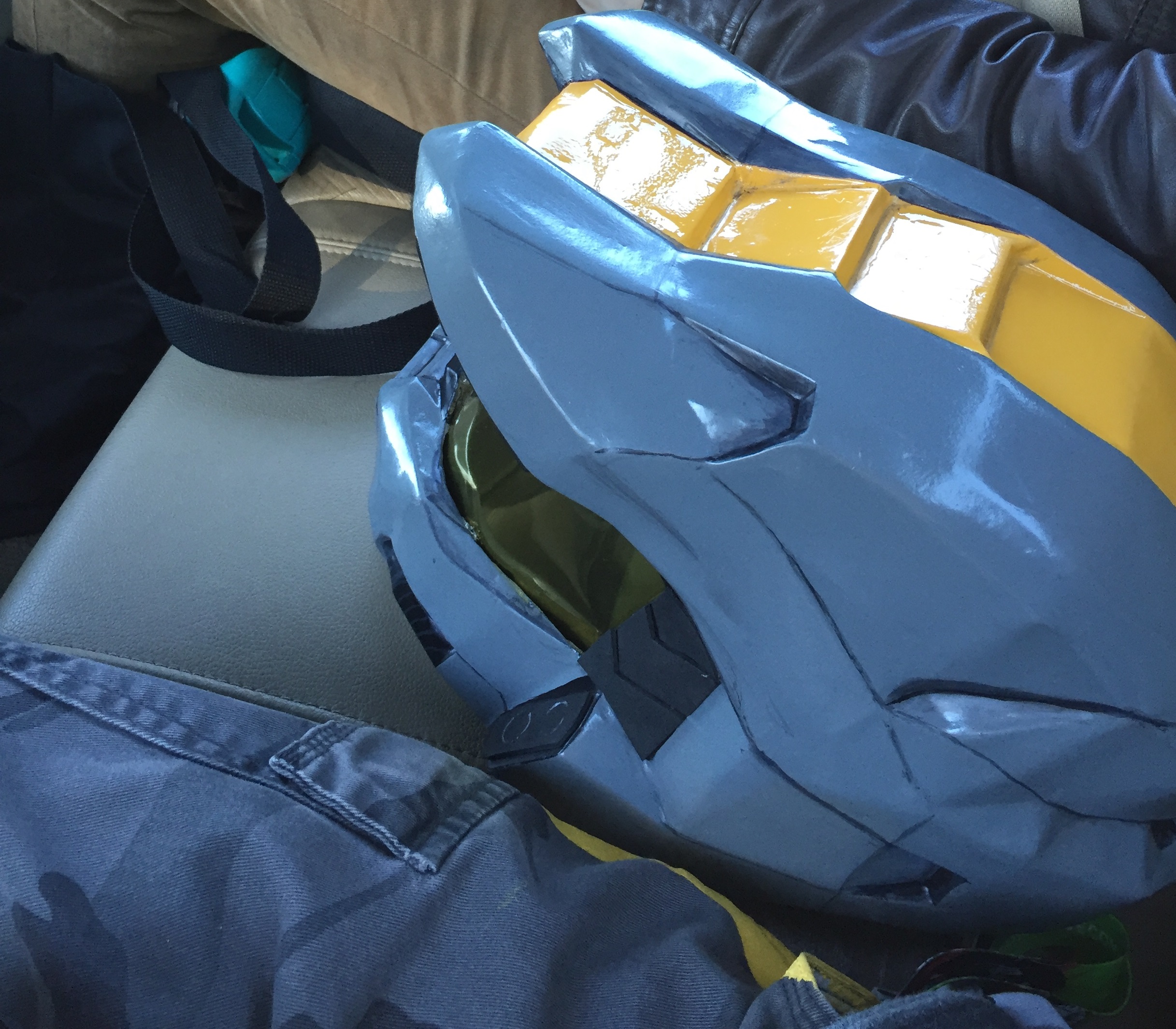 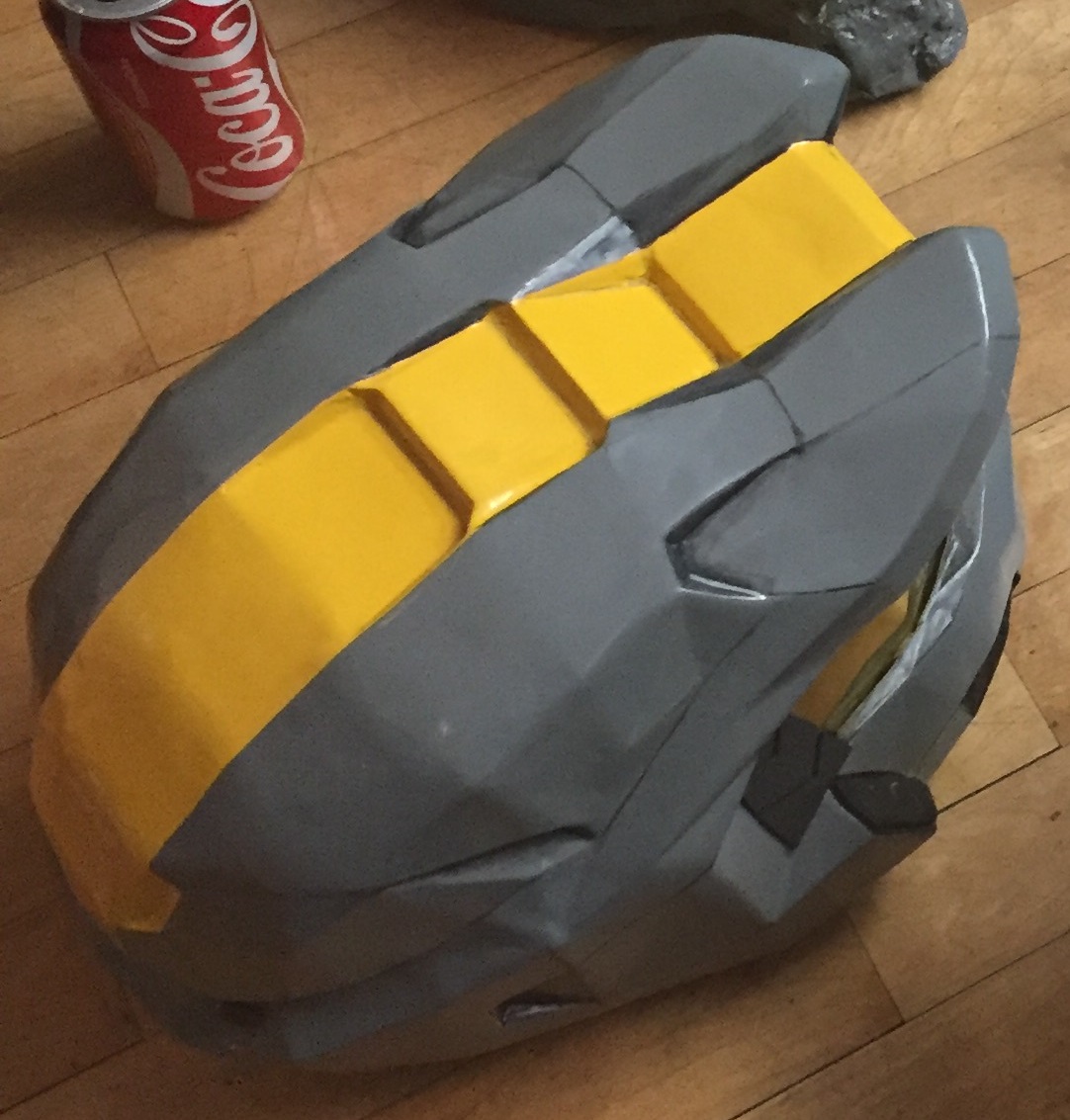 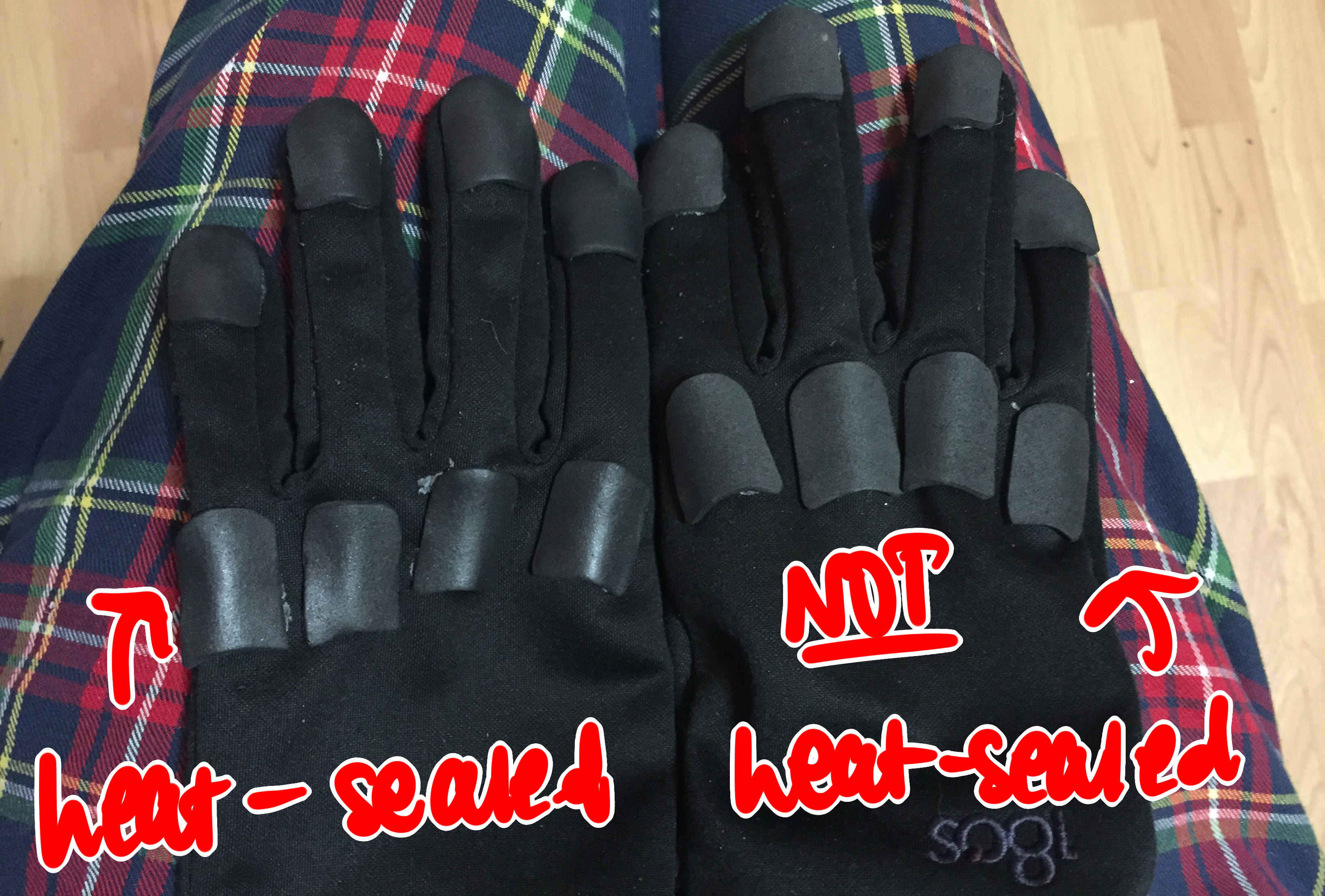 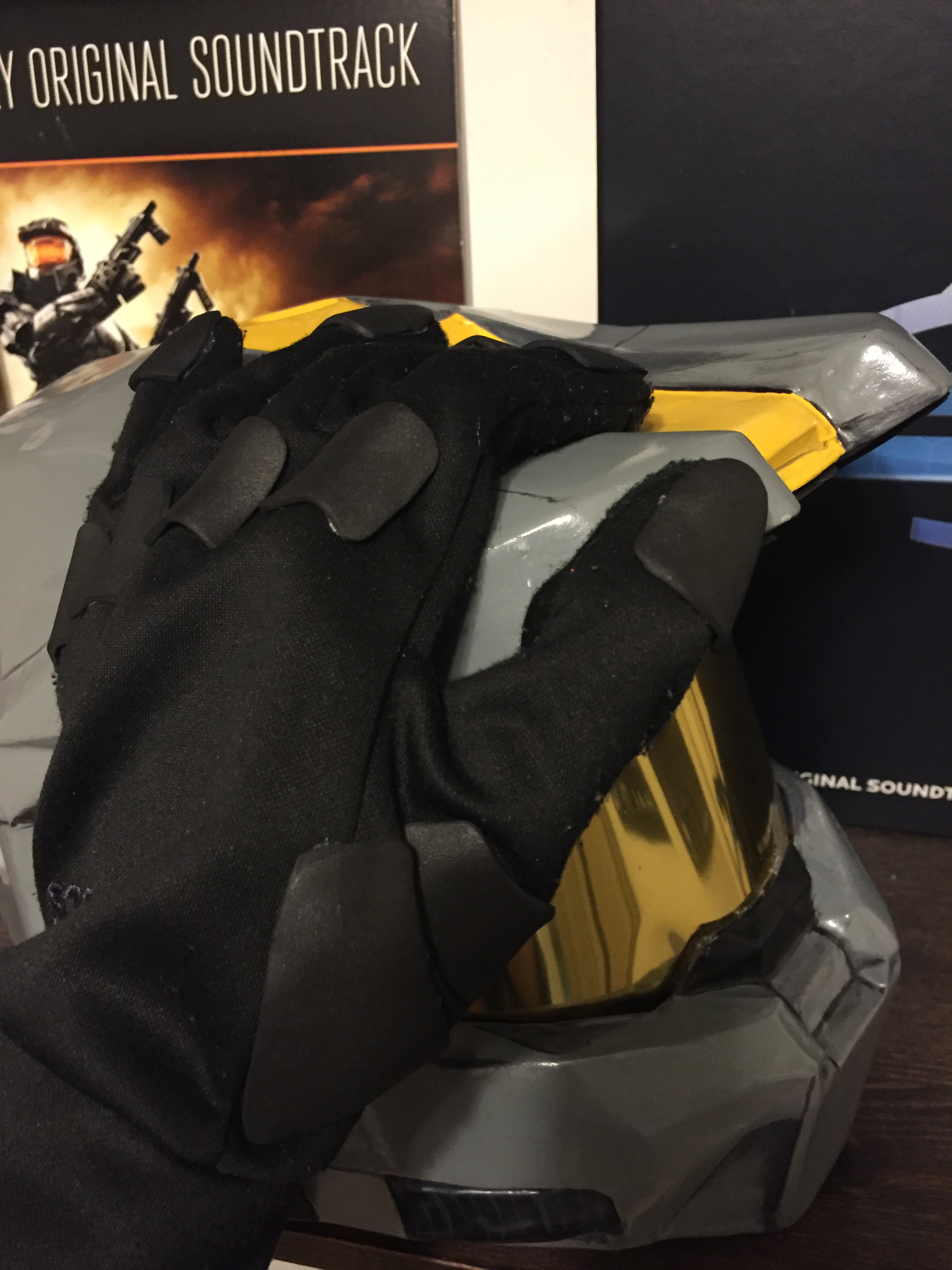 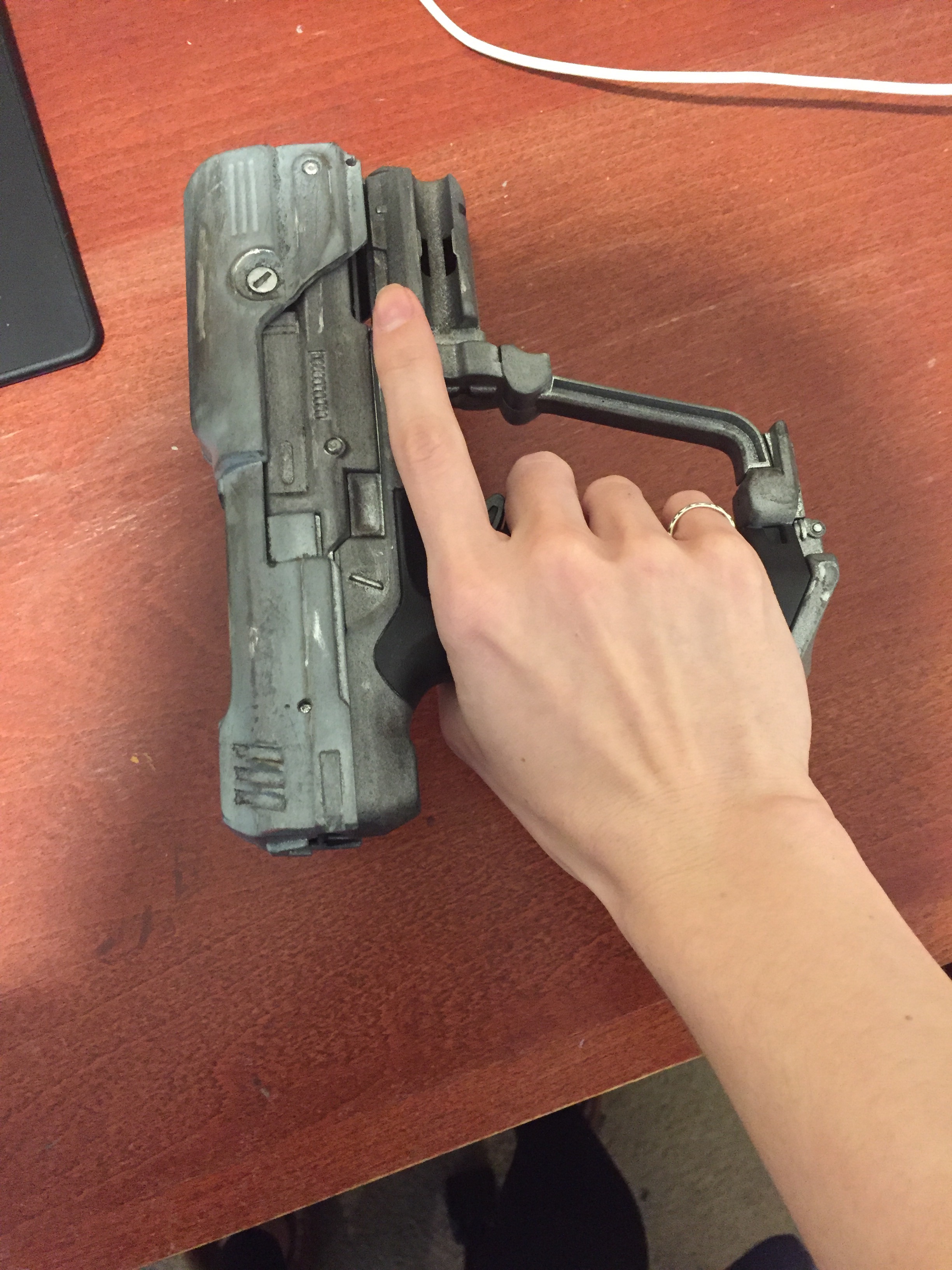 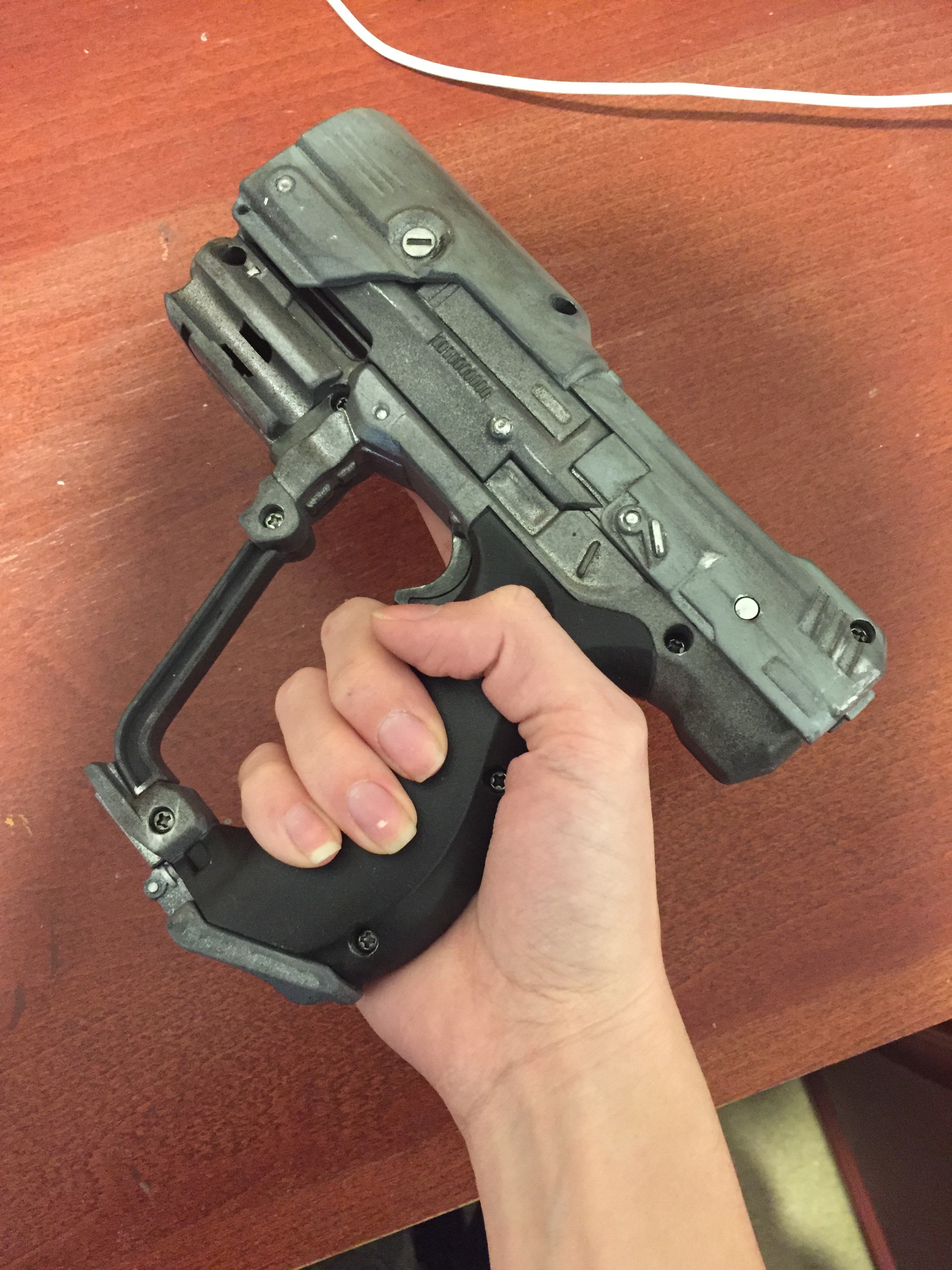 Nice build , hope the rest of it come's out has good has it has so far. I'll be looking for that in the summer then.:thumbsup

Pacific Regiment
looks epic man! what paint did you use on the BOOMco?
G

Yortstorm said:
looks epic man! what paint did you use on the BOOMco?
Click to expand...

Thanks! The gun was quite the process, Littlebro reports thusly: a gray Krylon primer, then Rustoleum chrome paint that was scrubbed with a paper towel after 5 minutes of drying time (to kill the chromey shine), and then on the slide, a black basecoat topped by Krylon Winter Gray (that lightish gray), which was left to cure overnight, and then scrubbed with a kitchen sponge (that's the smokey finish on the slide). He also lightly airbrushed/misted over the sliver parts with matte black to kill more of that chromey shine, then did some accents with Tamiya X-11 Chrome Silver and XF-56 Metallic Grey. The grip is the cheapo matte black spray paint you can get at Home Depot.


Shumway said:
Nice build , hope the rest of it come's out has good has it has so far. I'll be looking for that in the summer then.:thumbsup
Click to expand...

Pacific Regiment
thanks Glassed... ill TRY with mine.... hope it turns out good!

~Yort
P.S. ill just order another one in so i have a classic red one....

Yortstorm said:
thanks Glassed... ill TRY with mine.... hope it turns out good!

~Yort
P.S. ill just order another one in so i have a classic red one....

I got the Meta shirt from the Rooster Teeth store a few years ago, I think it was in 2011? I've got no idea if they're still in stock.

Pacific Regiment
well... i think ill be happy with my Halo 3 CTF shirt... might use it for armour/weapon photos...
~Yort
G

Aaaaaaaand I've finished the build! (On that note, I'm so sorry if this counts as necroposting, and if so I'll happily make a new thread!)

I wore this for half of Saturday at Long Beach Comic Con this past weekend, and a huge thank-you to the two people who told me to join the 405th!! I had actually completely forgotten I was a member here (it's been a very, very long year for me) and I'm really flattered (and flustered) at all the attention I got wearing this. I've never really cosplayed before, so getting stopped for pictures a new (and admittedly slightly scary) experience, but I had a ridiculous amount of fun. (I was a Taken Hunter from Destiny the second half of the afternoon before the heat kicked my butt.) These photos are slightly out-of-date since I decided the day before LBCC (like, at 4pm) that I was going to bring this and then spent the rest of the day manically doing maintenance and touchups.

The armor itself is made out of foam using foam pep files from demolition, robogenisis, and crackhead09, and scaled with HaloGoddess's scaling tutorial. I am the dictionary definition of a string bean, so I ended up having to do a LOT of re-sizing, to the point where the biceps and forearms are honestly 85% freehanding. (On that note, I freehanded the handplates as well, because I was exhausted and also Occam's Razor felt quite applicable there. The pep files for those are kind of a lot.) I did not use Plasti-Dip this time around and I sealed everything with PVA glue instead (thread on my experience with PD here: http://www.405th.com/showthread.php?t=46524 ). Everything's attached to the "bodysuit" (i.e., a mock neck sportswear long-sleeve and leggings) with snaps, and the chest is "hinged" with snaps to close it.

I'm really happy with how the upper half turned out! Doing the bottom half first was a HUGE learning experience, so I'm planning on re-doing the legs at some point in the future now that I'm so much more comfortable working with foam.

It was also surprisingly comfortable to wear! I didn't have a great range of motion (which I 100% expected) but I actually didn't overheat at all, and I spent a good 2 or 3 hours on my feet walking around, I think. One of my boots rubbed against my heel and really tore it up, but the boots are also my priority to re-do since I'm not entirely satisfied with them.

And close-ups of my helmet:

I made this about a year ago using the resin and bondo method, and I refurbished it when I was working on the upper half of the armor since I had some bits that I wasn't 100% satisfied with, and because it needed a new coat of paint regardless to match the body armor. The visor is laminated cellophane and mirror tint -- h/t: http://eventhorizoncosplay.tumblr.com/post/117439160180/not-so-much-a-tutorial-as-it-is-a-tip-to-all-my -- and the "lights" are just reflective tape, which I've also placed in all the other nooks that have lights in the armor. It's lined with upholstery foam and, again, surprisingly comfortable for extended periods of time.

I still also want to (er, need to) put in neodymium magnets so that I can holster the pistol on my thigh, and with BOOMco coming out with the MA5, I might do the same for that (if it doesn't look too small compared to the rest of me -- again, I'm kind of a pipe cleaner, so it's 50/50).

In any case, if you've gotten this far, thank you for reading this monster of a post!


"I don't know what's weirder, that you're fighting a stuffed animal, or that you seem to be losing" - Suzie
G


"I don't know what's weirder, that you're fighting a stuffed animal, or that you seem to be losing" - Suzie
Click to expand...

Colonial Regiment
I'm meh with foam. I don't think I've got anywhere near the talent to make something like that helmet. Looks very awesome.
G

arma358 said:
I'm meh with foam. I don't think I've got anywhere near the talent to make something like that helmet. Looks very awesome.
Click to expand...

Ahh, thanks!! The helmet was actually way more straightforward than it looks, pepakura is basically painting by numbers and resin+bondo just takes some elbow grease (and patience).

Colonial Regiment
Yeah...that I know all too well. Still got quite a bit of bondo work to do on my own new helmet......

glassedplanets said:
Ahh, thanks!! The helmet was actually way more straightforward than it looks, pepakura is basically painting by numbers and resin+bondo just takes some elbow grease (and patience).
Click to expand...

Ooh, I feel that. I still feel like I should go back and re-bondo this helmet (again). Good luck, though!