CoVaCon is a spiritual successor to InCon which has a special place in the hearts of many West Coast Canadian Regiment members (PurpleRogue, LongShot X). This year the 405th is being honoured as special community organization and our very own PerniciousDuke is a featured cosplay guest.

Along with other panels there will be a special 405th panel of experts headed by CplYapFlip, LongShot X, PerniciousDuke, Rinzlerr and TurboCharizard to teach the different methods of armour building that we use. 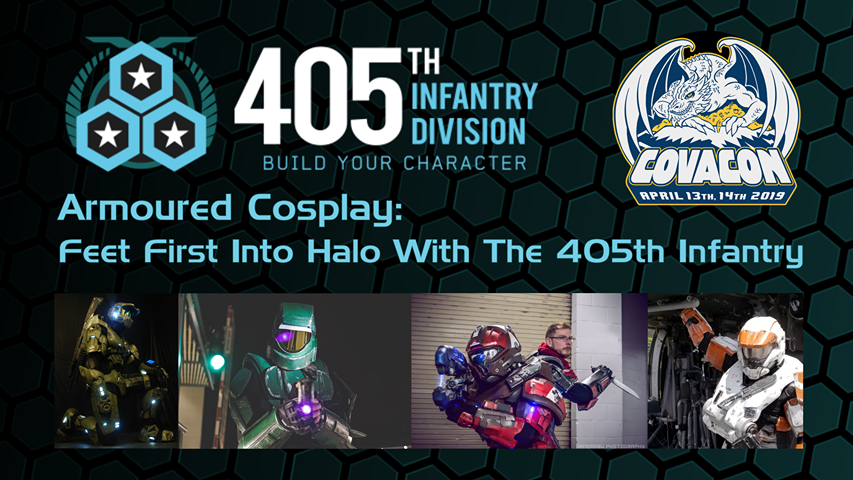 This joint Operation between Delta Battalion and Washington Battalion will definitely be one to remember! After Action Report will be posted in this thread once the Operation concludes.

Pacific Regiment
405th Regiment Officer
Washington
Community Staff
Anyone have a weapon I could borrow for that weekend?

It seems my shotty is going to require more stripping before I can reglue it and I've allocated all my time for working on the booth. Booth is looking great though!

Mountain Regiment
405th Regiment Officer
I got a bayonet...

Dunno they'd let it in the convention, though...

PerniciousDuke said:
Anyone have a weapon I could borrow for that weekend?

It seems my shotty is going to require more stripping before I can reglue it and I've allocated all my time for working on the booth. Booth is looking great though!
Click to expand...

What kind of prop do you want?

One of those would be Awesome! Whichever one has the least chance of me breaking it.

PerniciousDuke said:
One of those would be Awesome! Whichever one has the least chance of me breaking it.
Click to expand...

Do you just want the whole lot for the booth good sir?

We have room for 4 more small arms and 3 standard arms. No room for ordinances.

This space is designed so that members can use it like a coat rack when they are tired of carrying their equipment. Zip ties are provided.

That said, I think a plasma pistol and a BR would be great to house in the rack for the weekend.

Division Staff
Canadian Regiment
405th Regiment Officer
Delta
Community Staff
Delta BCO's After Action Report
I may have some personal biases about CoVaCon since it is my favourite convention but this past weekend was chock full of content provided by the 405th members and it was an excellent showcase of the tenacity and dedication that our community has to teaching and helping better the costuming and convention experience. As a joint operation between Delta Battalion and Washington Battalion we had a lot of horsepower on our side in terms of teaching ability and public engagement, in usual 405th fashion, we delivered.

As a group CplYapFlip, PerniciousDuke, Rinzlerr and myself presented the armour building panel. This is my second panel presented with Duke and it's always a pleasure to play off of each other on stage. The Corporal gets an honourable mention as our snarky AI MC who can somehow wrangle us three with grace. This was Rinzlerr's second panel he has ever sat on and I've had the opportunity of joining him for both occasions, seeing his improvements in handling public speaking as an expert to a room of eager listeners is a treat that I'm not quite used to. The crowd, although not quite enough to fill the main auditorium, was engaged and interested in the various methods of armour building. Many had questions and thanked us after the presentation for all the help, guidance and inspiration.

As a featured cosplay guest, PerniciousDuke was tasked with judging the cosplay contest, helped with the 405th panel and hosted a leather working panel to show his recently completed Skyrim Nightingale armour.

@CplyYapFlip and Rinzlerr both had media passes as photographers so they have sore trigger fingers after a weekend of snapping photos. I look forward to seeing the results of your hard work you two! Both of them also helped man the 405th Pacific Regiment Recruiting Booth with Arc Sol Cosplay and both the community and other exhibitors were blown away by the setup. There's also whispers of another local convention that was at CoVaCon requesting an appearance of the booth later this summer. Well done team for making such a positive impression!

We were all so busy that there are very few photos of us all together unfortunately but the positive impact that we had on the Mid-Vancouver Island nerd community is going to be lasting and I eagerly look forward to making another 405th appearance at the CoVaCon 2020 show.

Canadian Regiment
Delta
Was great deploying with all of you


It is sad that we didn't get photos all together. I didn't even feel I had much time to don my armor with all the extra duties. But we certainly had fun.

Here's some photos that show the booth at CoVaCon including the booth upgrades.

And this seems like as good a place as any for fun vacation photos...

Canadian Regiment
Delta
that entire weekend went by like a blur.

snuck in some hdr shots of the booth and the buckets

Pacific Regiment
405th Regiment Officer
Washington
Community Staff
Yeah, it did go fast. The 15 hours of round trip traveling did not go fast for me though!

Your pictures turned out great!

PerniciousDuke said:
Yeah, it did go fast. The 15 hours of round trip traveling did not go fast for me though!

It may have went by fast but we'll have plenty of opportunities in the future to have another joint operation between Delta and WaBat. Next time we may even have a larger crew from each!
You must log in or register to reply here.
Share:
Facebook Twitter Reddit Pinterest Tumblr WhatsApp Email Link