Division Staff
Canadian Regiment
405th Regiment Officer
Delta
Community Staff
The Vancouver Canucks are hosting a "Gamer Theme" night for the Saturday home game and are looking for around 20 cosplayers from various fandoms to be available for pre-game photos and hanging out with the fans. From talking with the organizers, we have approval for 5-10 Halo characters to be on the guest list.

Doors to the public are at noon and you are requested to be available from 12:00 to 13:00 for photos in the arena concourse with the general public before the game. To accomodate this a dressing room is available for suiting up and storing armour cases when out in costume, if you would like access to the dressing room, please arrive at 11:00.

Tickets will be provided to watch the game, to claim tickets I need to submit your name and a sample photo of your costume to the organizers beforehand.

All 405th Appearance rules within The Mantle apply as well as the additional rule requested by the facilities managers that no realistic weapons be brought. No UNSC props will be allowed at this event. Covenant goofy space guns only. If you would like a prop but do not have any Covenant tech in your arsenal, bring a hockey stick/bottle of maple syrup/stuffed beaver/cup of Timmies for fun pictures instead and show your Canadian Regiment pride!

Remember, keep your stick on the ice.

Division Staff
Canadian Regiment
405th Regiment Officer
Delta
Community Staff
I'll be making the trip over from Victoria likely in a similar fashion as shown below. 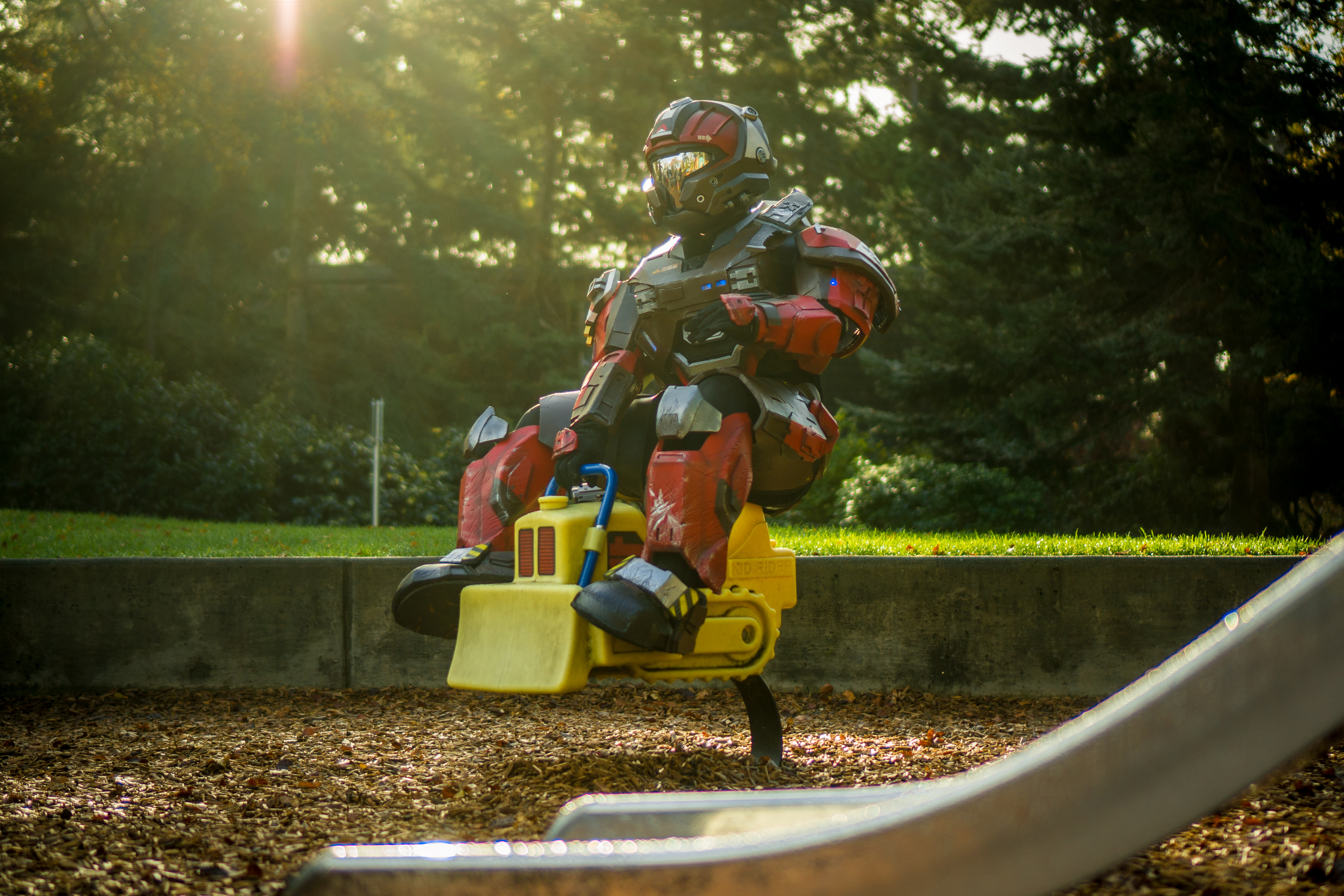 My sample photos of my costume are my Deployment images.

See you at the game!

TurboCharizard said:
Remember, keep your stick on the ice
Click to expand...

Hark! Do I hear a red green reference?!

Mountain Regiment
405th Regiment Officer
My childhood hero was red green! I still hum his theme song to this day!

Canadian Regiment
Delta
Is it too late to say that I'd love to come?
I'd be wearing my one and only:

awildshannon said:
Is it too late to say that I'd love to come?
I'd be wearing my one and only:
View attachment 262659
Click to expand...

ODST Langford was also on the list of maybes depending on repainting of his kit.

I also have my ODST that can be brought out as an emergency backup if anyone's build progress falls behind.

Canadian Regiment
Sportsball and gamers untied under one roof? What is this heresy you speak?...you westerners and your strange ways

Division Staff
Canadian Regiment
405th Regiment Officer
Delta
Community Staff
Alright all you Canadian Regiment folks who can't make it, we need some input from the rest of the team that's geographically challenged for this event! Put on your thinking caps!

All cosplayers attending the event are allowed to submit messages for the large billboards at the game and I want to put as many Halo and 405th themed things on that 30+ foot screen as possible. Any and all suggestions are welcome so that we can compile a best of list to throw at them.

Fireteam Off the Rails, I summon you from the depths as well! Schankerz PaiganBoi Dirtdives Lieutenant Jaku PerniciousDuke and Sean Anwalt ARISE AND THROW YOUR COMEDY SPAGHETTI AT THE WALL TO SEE WHAT STICKS

"Canadians are short... Especially the Asians..."

I actually heard that some Mexicans are flying to Canada and then illegally entering the US.
when will they realize that staying in Canada would be better?

Pacific Regiment
405th Regiment Officer
Washington
Community Staff
For us non sportsy people... what is an example of a thing that would normally go on a hockey reader board?

Only the stereotypical "Marry Me" comes to mind. So naturally, Marry Me Cortana.. which might get confusing if your girlfriend is dressed up as Cortana... I guess the Kiss Me one works too.
Last edited: Nov 28, 2018

"Daily Update on the status of Installation 04: ...it's still gone" (credit to the funny Facebook group of the same name)

"My name is Michael J. Caboose and I hate BABIES!"

PerniciousDuke said:
"My name is Michael J. Caboose and I hate TAXES!"
Click to expand...

Pacific Regiment
405th Regiment Officer
Washington
Community Staff
I like the babies one better, but for the family event the taxes one might be the better choice.

Canadian Regiment
Washington : That was the worst throw ever... Of all time

Caboose : Not my fault. Some put a wall in my way.

Mountain Regiment
405th Regiment Officer
When a goalie fails to block (or, as the case of the Grizzlies one game last year, decides to leave early to beat the traffic)

"That was the worst block ever. Of all time" seems like it would be funny.

"You're telling me we flew halfway across the galaxy, went backwards in time, and enjoyed a steam, for THIS?!" - when the one team defeats the other team quite significantly.

"I'm glad we flew halfway across the galaxy, went backwards in time, and enjoyed a steam, for this!" - in the event it's a close game.

"For a [brick/puck/ player/ glove/ anything that flies around quickly], he flew pretty good!"

"Hasn't been a butt-kicking this bad since master chief smashed the flood in Halo 1!"


All of these should be accompanied by the 405th logo.

As a first outing of the newly forming Delta Battalion we had an excellent showing with five of our eight costuming members in attendance and fielding kit.

Artifice and Rinzlerr acted as our advanced deployment forward scouts donning Halo Reach and Halo 3 ODST armour. TurboCharizard and awildshannon added two sets of Mk.V MJOLNIR to add some much needed regenerative shielding capabilities and act as spearhead and rear guard when moving through crowds. CplYapFlip was our AI Coordinator and primary imaging director. 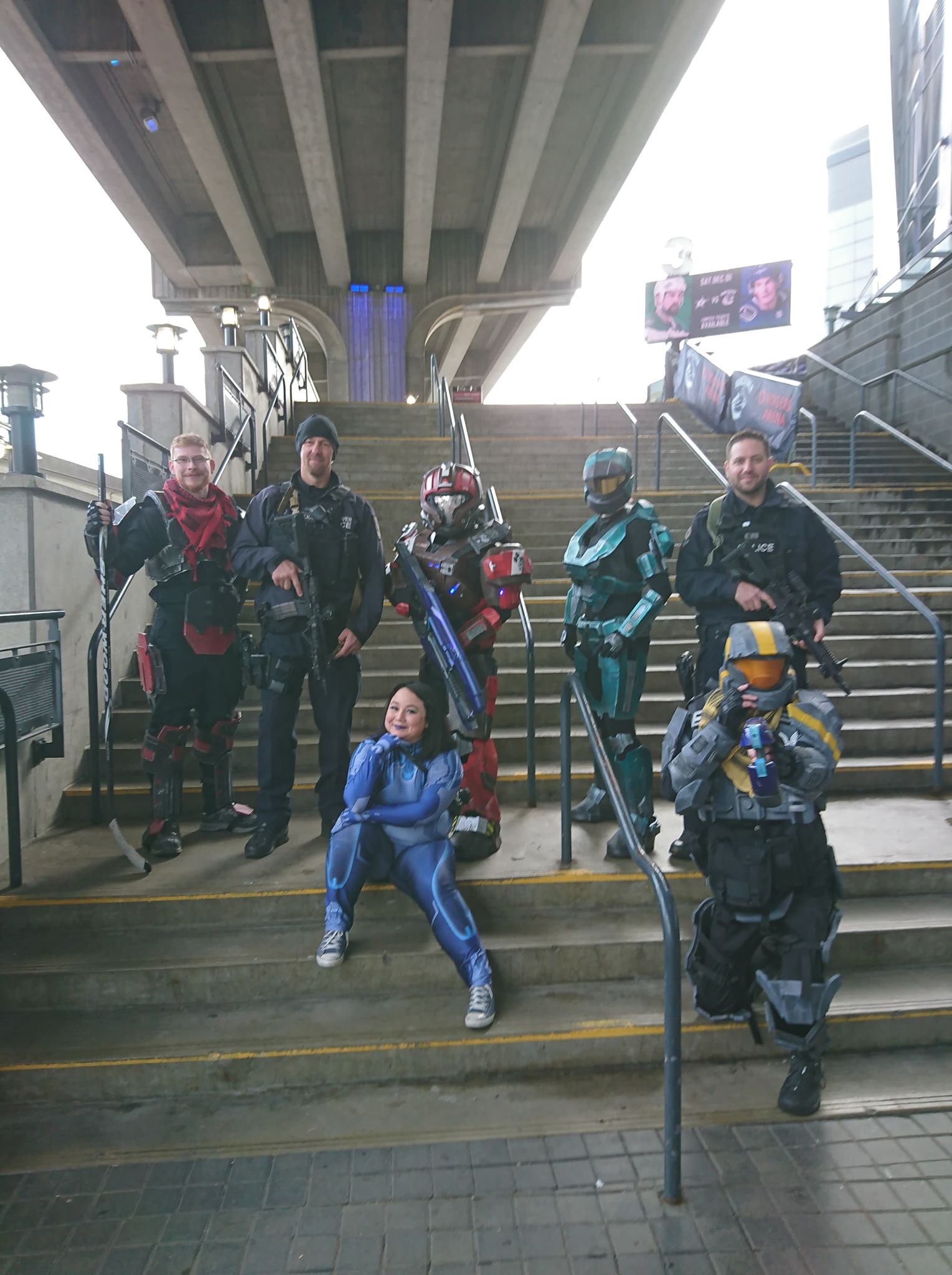 The day started with suiting up and joining the crowd filing into the game. It was a lot of pictures with attendees and dancing with the drum line that appeared. The theme of the day wasn't heavily promoted so many people were surprised by the appearance of a fireteam of Halo cosplayers appearing and interacting with the crowd.

As the stadium was filling up we had a guided run through the concourse with photo-ops and getting into position for the national anthems. After the Canadian national anthem was sung the giant screens played video from Deliver Hope and rocking riffs from the Halo 3 soundtrack. The cameras then cut to us cheering on the Canucks and acting like fools/hooligans.

During first commercial break we were split up and got the opportunity to "deliver powerups" to the crowd by throwing tshirt and swag bundles from various points within the stands.

During first intermission and the second period we continued to "secure the perimeter" and patrolled the upper levels of the arena taking photos with/traumatizing small children with our big scary armour. Parents all seemed excited to see us and wanted photos with their children and us in the game setting, many children were just too scared of us even with awildshannon doing her best to show that we were friendly.

As the game carried on we went down to take a few photos as a group and show off some new toys and armour to you fine folks in the next few days. We also ran into the Dallas Stars just kind of hanging out kicking a soccer ball around in front of our dressing room for some reason which was cool.

Joining in on Gamers Night was an excellent opportunity to band together and do some of the most Canadian things you could ever do in MJOLNIR Powered Assault Armour. I'm not sure if we'll ever get a chance to do exactly this sort of event again even though the organizers were blown away by our costumes and professional attitudes/ability to interact with the fans, but we have a contact within their community events organizing team that may be planning on starting some armour cosplays in the near future.

Well done Deltas, we did the Canadian Regiment proud.