European Regiment
Whew, i intended to make this post almost two years ago but... i kinda forgot

But here we are!

I made this costume for my boyfriend SiTechKeyes since he doesn't know how to sew and i don't trust him around sharp objects. No offence though

So this journey started on a small fabric market in Germany, where we luckily found the perfect grey fabric for our Captain. Like always you only find the good stuff if you're not searching for it. I don't even know what kind of fabric it is, it was just the perfect one!

I used some patterns I found at our local fabric store, just some normal pants (with pockets since pockets are everything) and a coat that kiiiiiiiinda fit the original coat of Keyes if you close both eyes. i had to made many alterations to that one, but it was already a huge help since i still hate to make sewing patterns by myself and i hate to sew things with sleeves.

so the happy sewing began and we had some losses. Rest in Peace all those needles i broke in the progress
For the sleeves I also used a stretchy fake leather I got from my local fabric store. 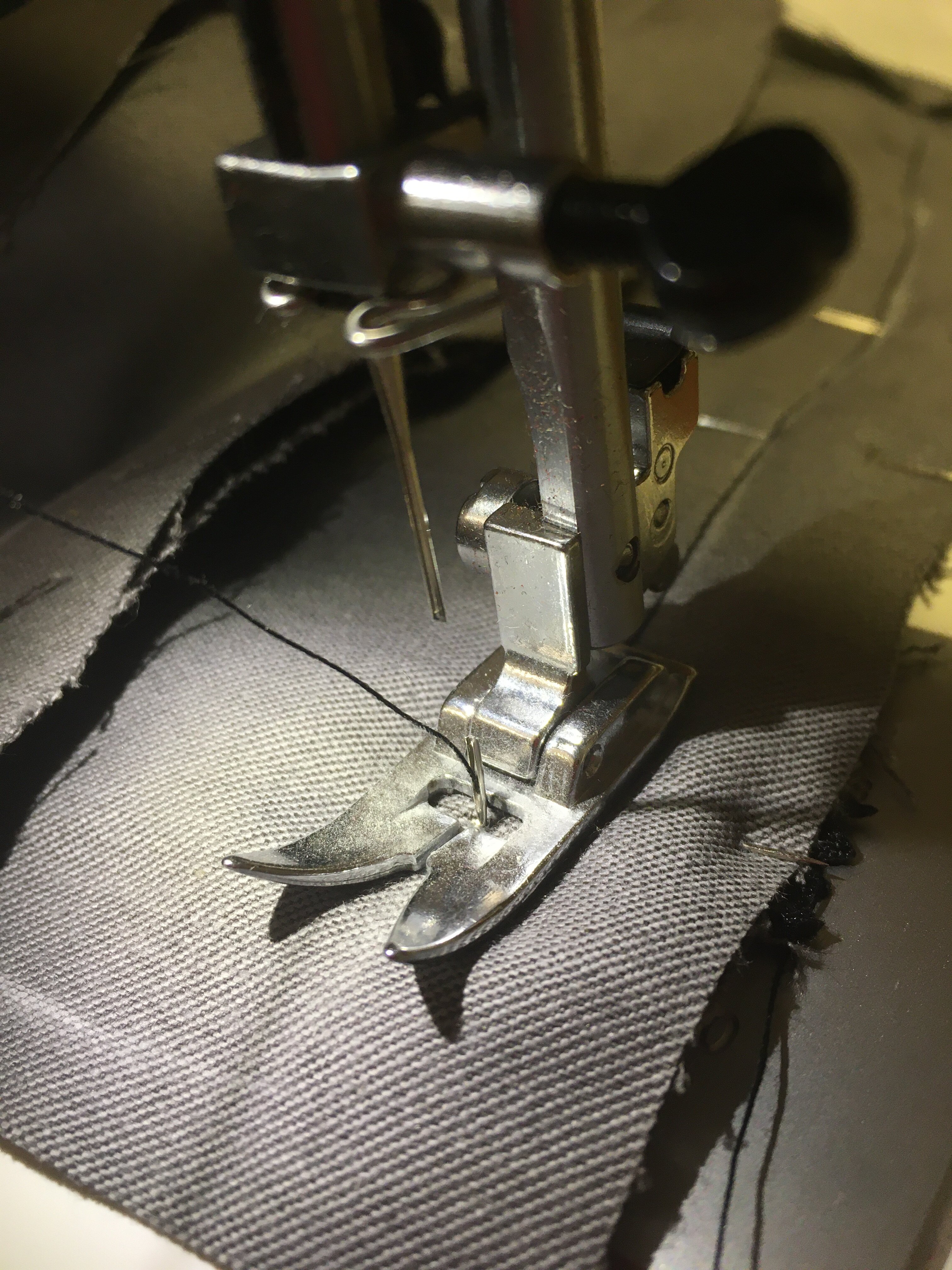 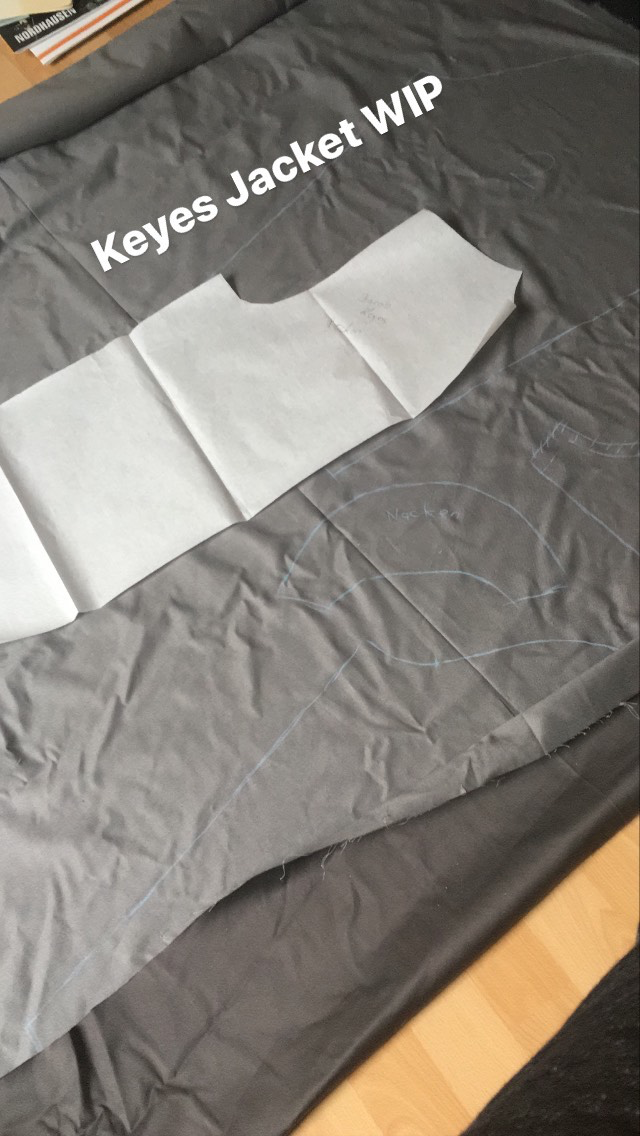 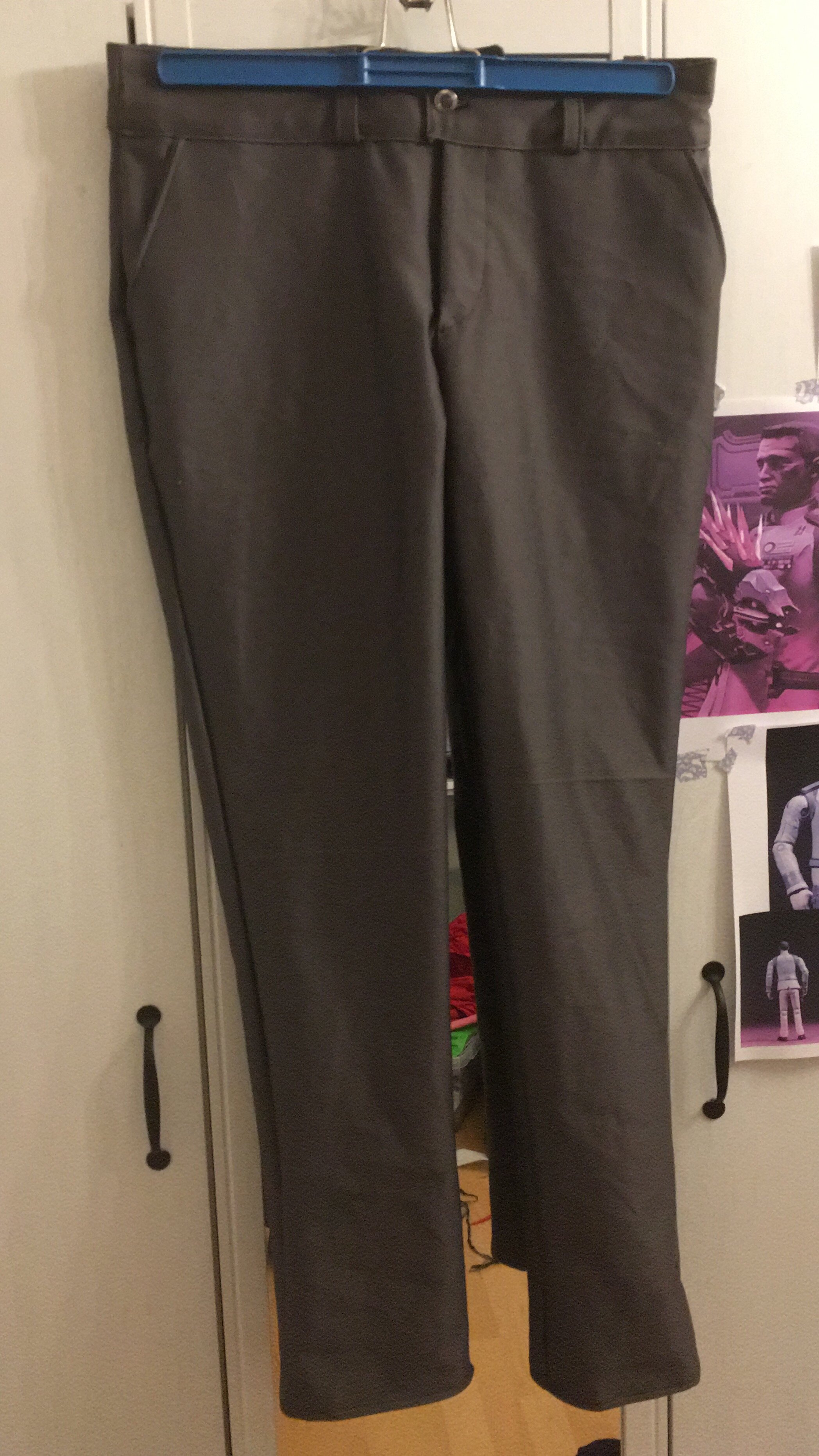 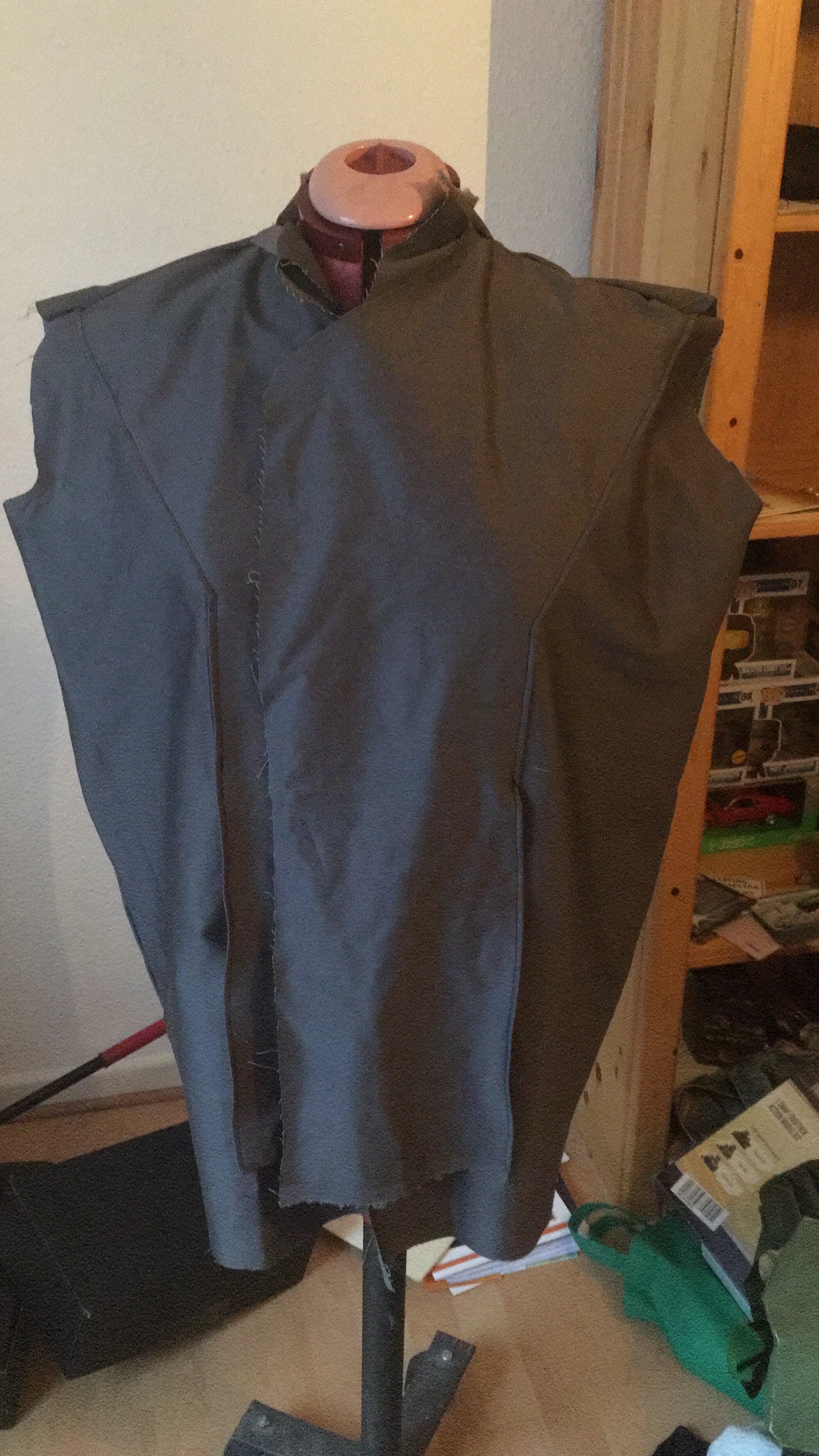 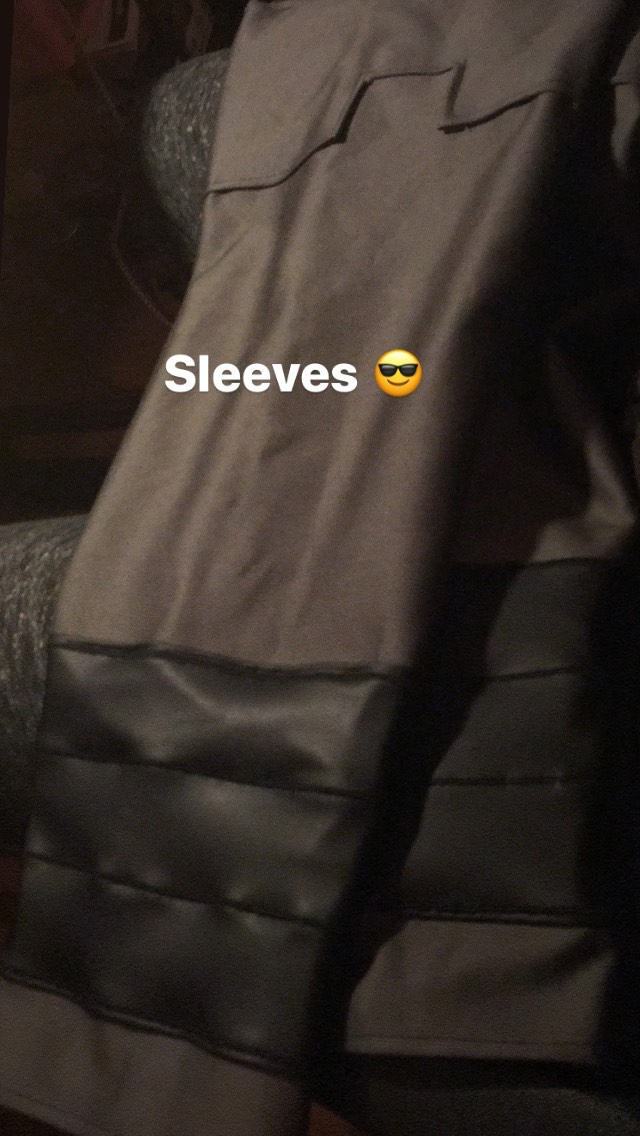 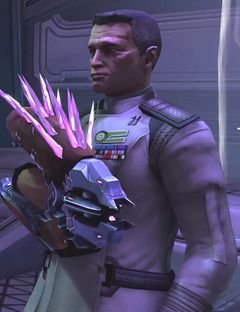 At some times i was really unhappy with the people who thought it would be a good idea to design this Uniform like this, so i made some sewing breaks to start making the hard parts.

Those were made out of 2 mm foam/crafting foam and CosplayFlex (some kind of thermoplast like worbla) and safety pins.
I will remake those as soon as i can since I really can do that better by now. The Pillar of Autumn logo was printed with our already dying printer (also Rest in Peace :') ) so i had to fix that with some colored pencils. And since i thought it would be a good idea to cover that paper part with UV Resin.... it took me like 5 tries to get it right. mostly because UV Resin gets hot and deforms if you're too stupid to use it xD
but in the end i believe it was a good idea since it gave it a nice coating

The stars were products of my short timed UV Resin - obsession, so basically crap I had laying around 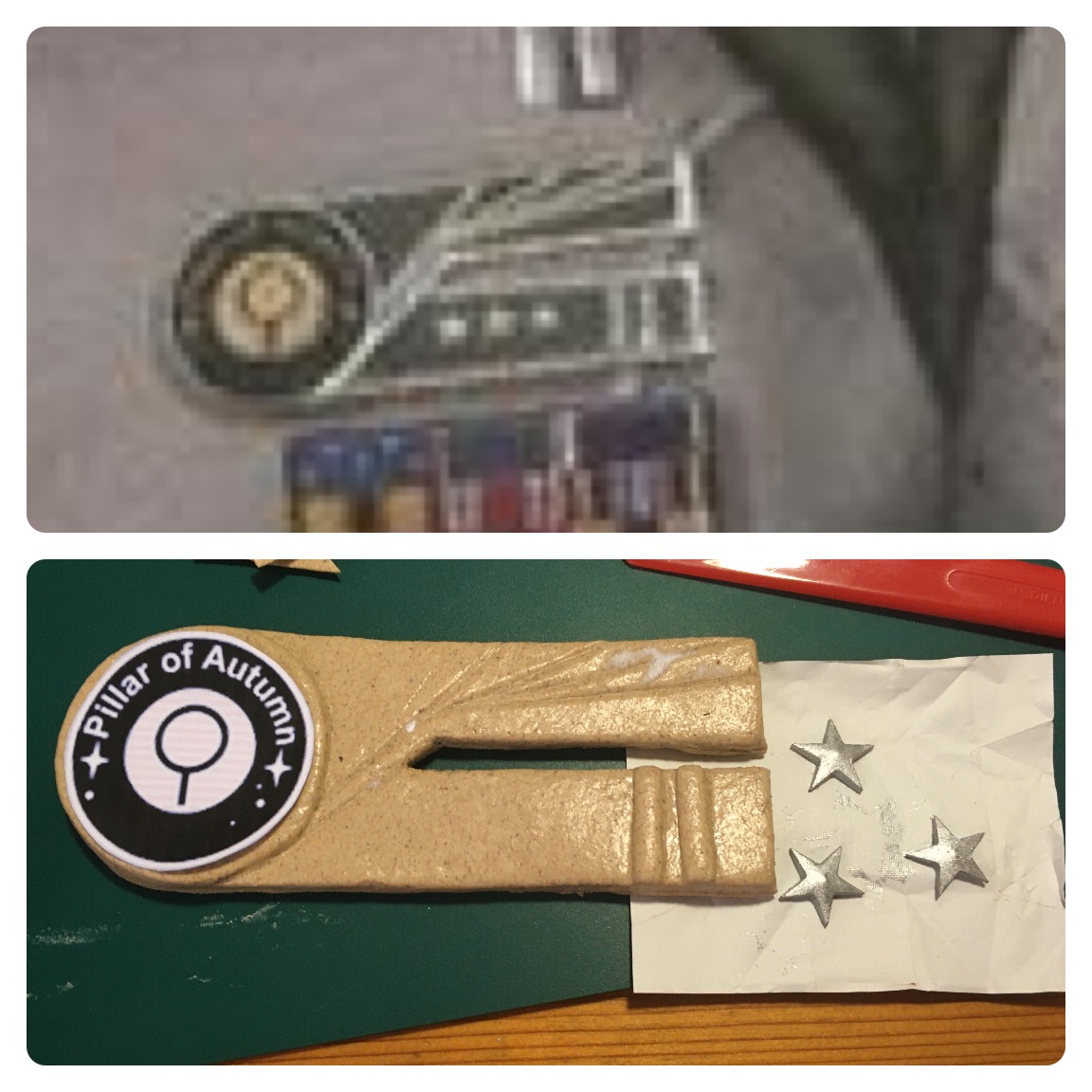 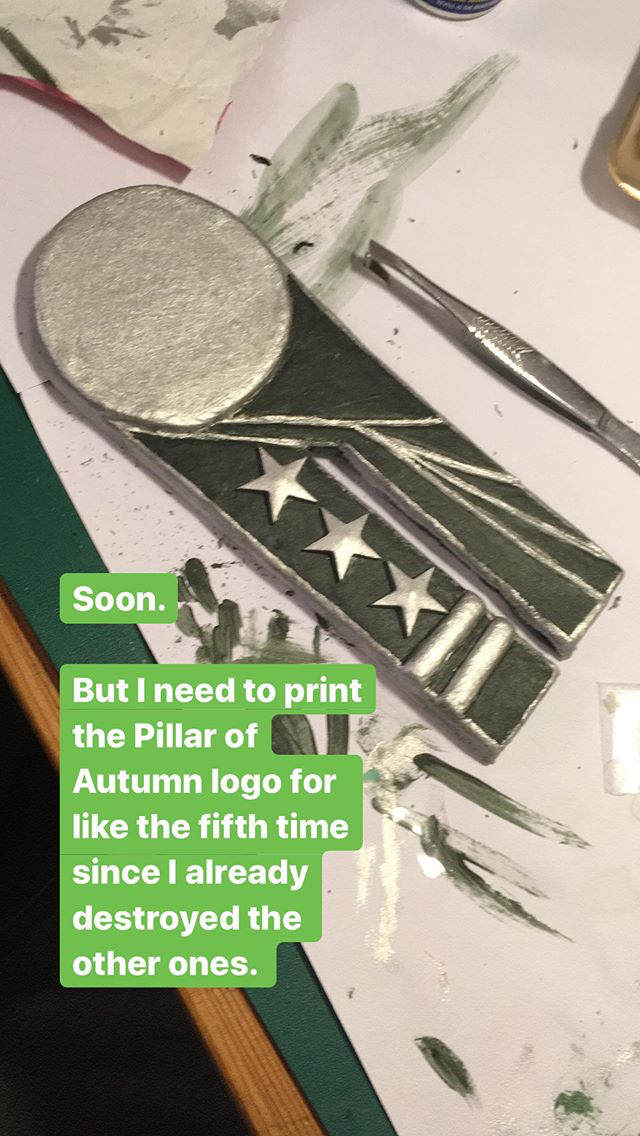 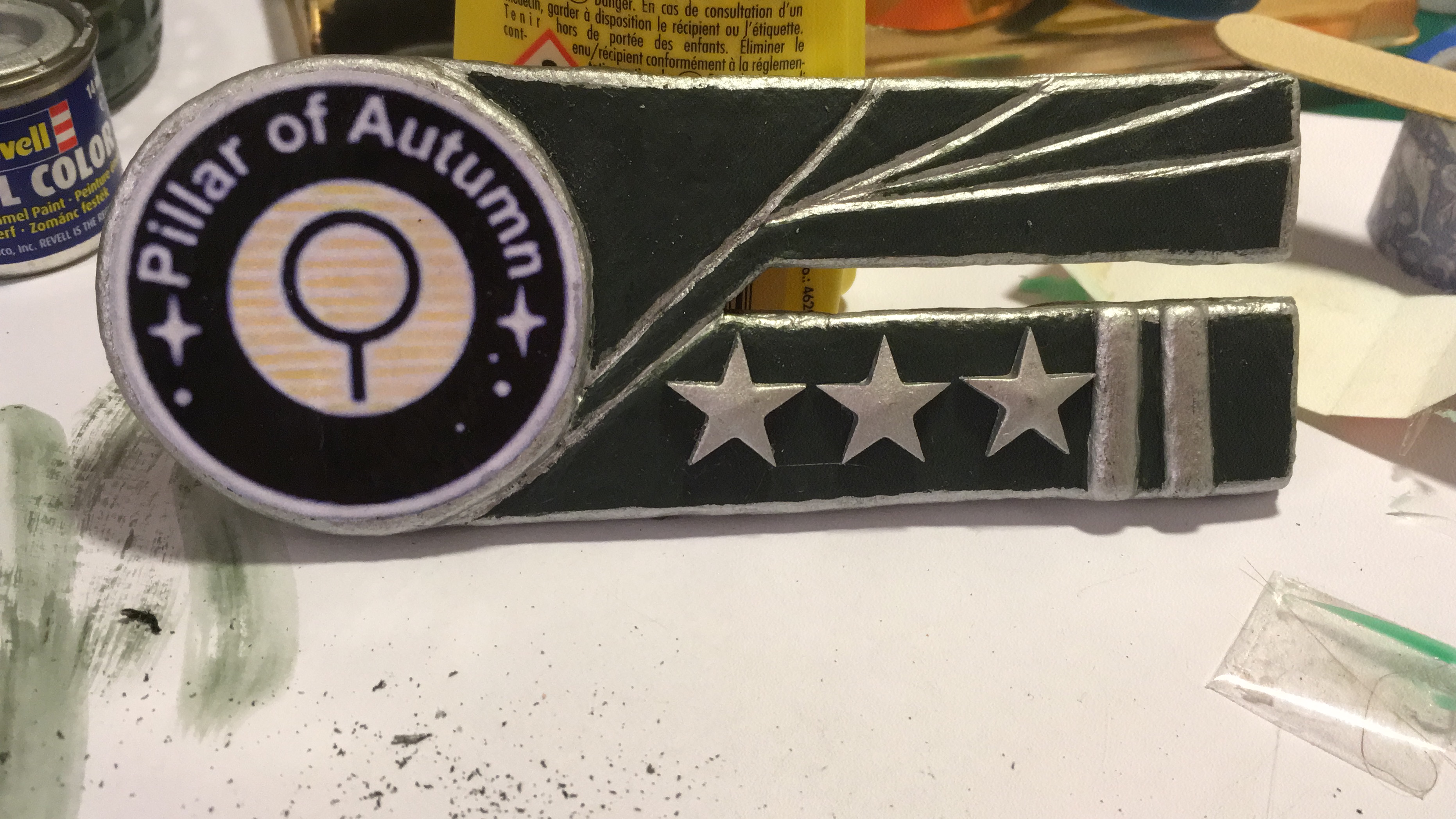 Kinda the same progress on his name tag, but i didn't took any photos of that ^^"

We made a few attempts to make this board where Keyes wears his medals. But finally we left them out after we talked to a friend who served for the american army and were told that at least some of them look like the real ones (like the Medal of Honor). 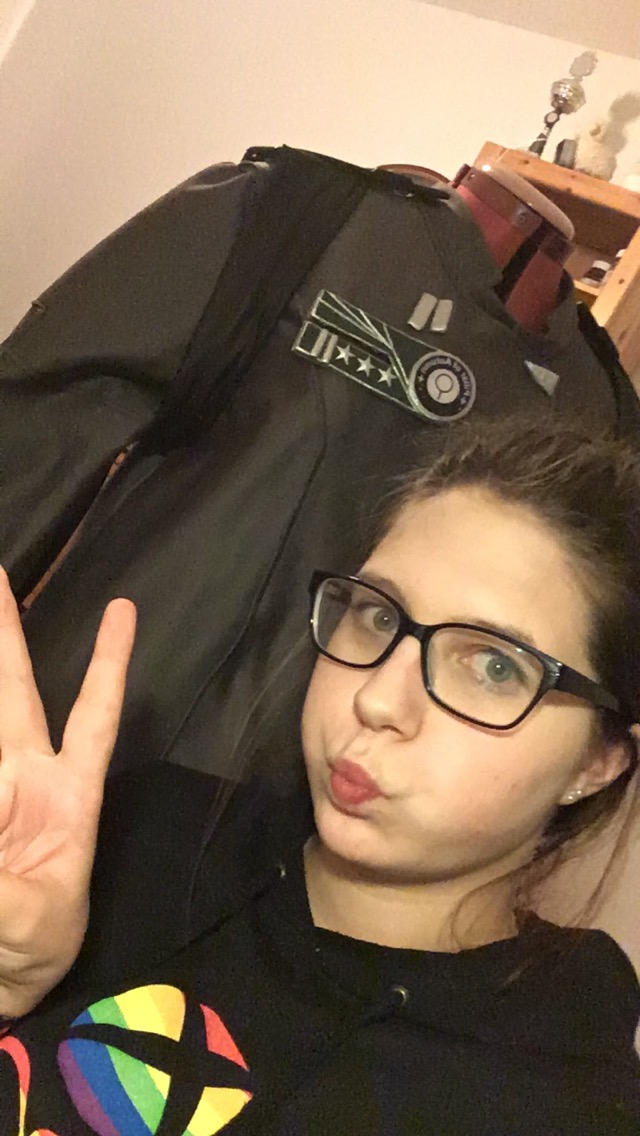 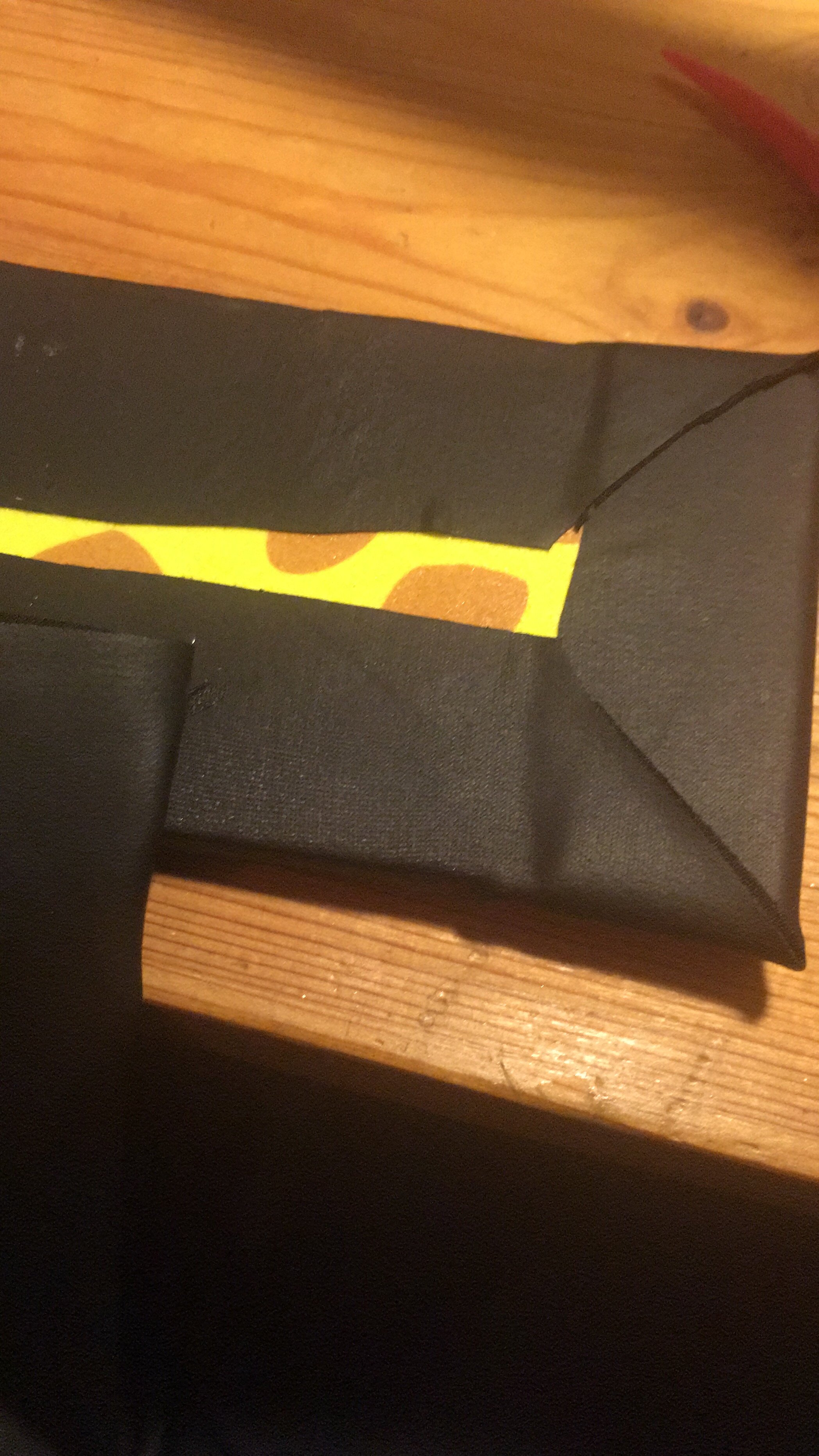 After that i made those shoulder plates(?)
I just took some crafting foam i had laying around (with giraffe prints xD ) and some sprayglue to put my fake leather on it. Also some snap fasteners so the shoulder thingies can be detached for washing

For the belt i also used the fake leather and MacGyvered the buckles with CosplayFlex and stuff i found somewhere. Sadly i don't have any WIP pictures of those too, but i may remake it since i also can do those better.

With that, the costume was itself finished! 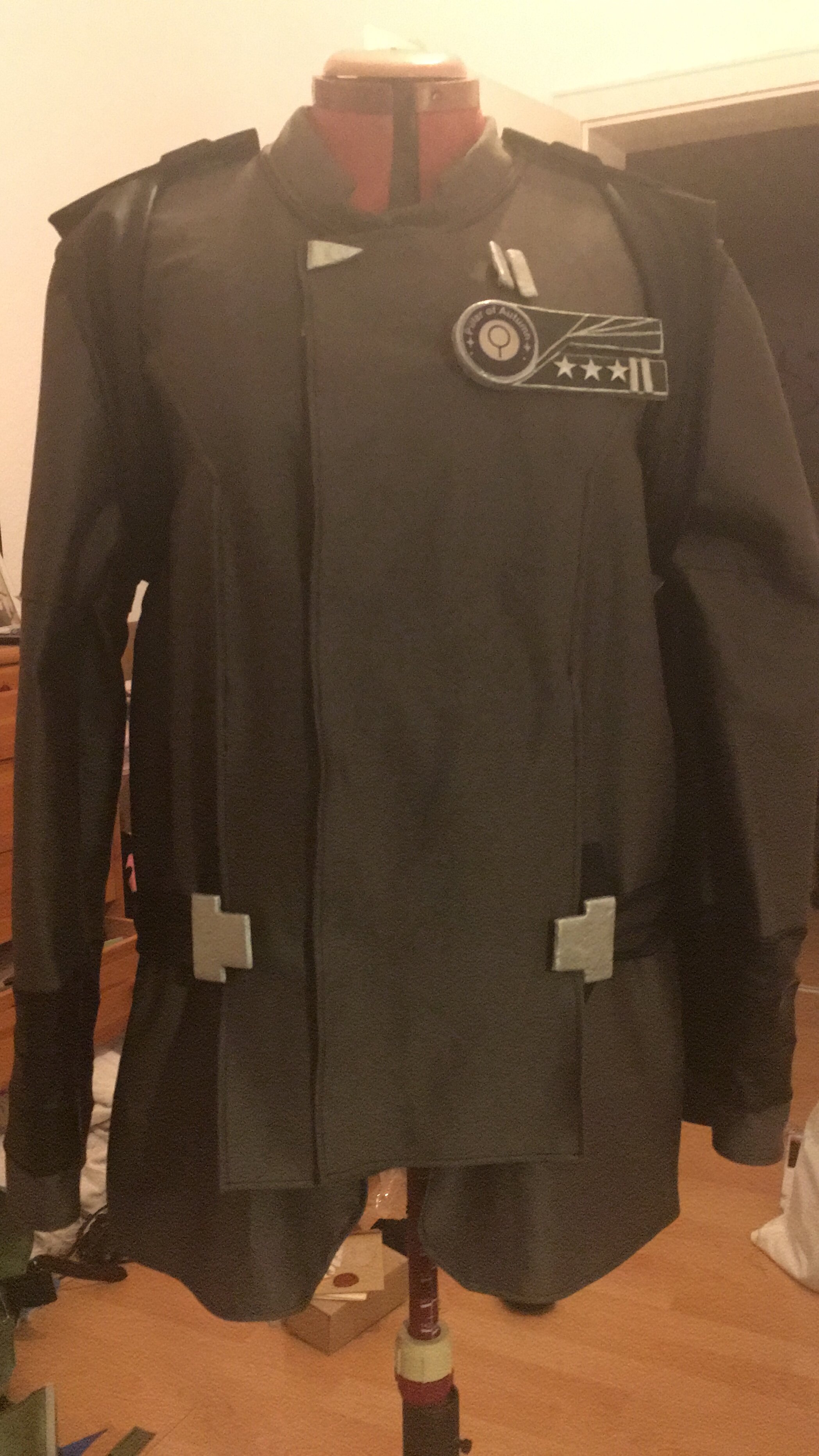 So things left to do:
We needed a way to turn him a few years older.

But for that our local "EuroShop" (a store where everything costs just one Euro) we found a hair wax with silver pigments in it.
Like i said, finding stuff when you don't search for it. A great way to turn your hair gray for a long Con day! 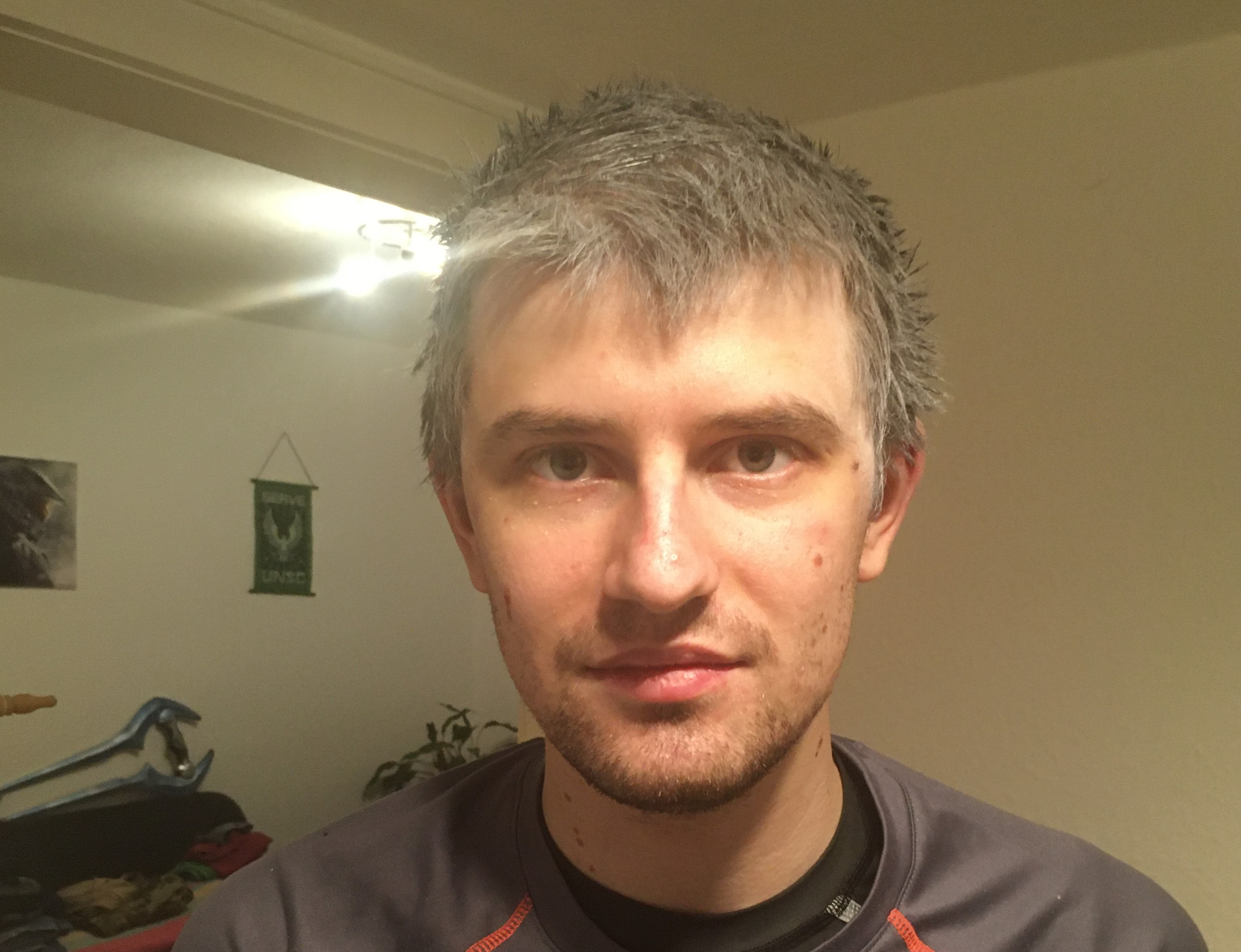 And after roughly a month of sewing and crafting we had the last Con with our Regiment before Corona closed everything. But thanks to the great photographer Lisa Koehler we got soooooo nice photos of the finished costume! 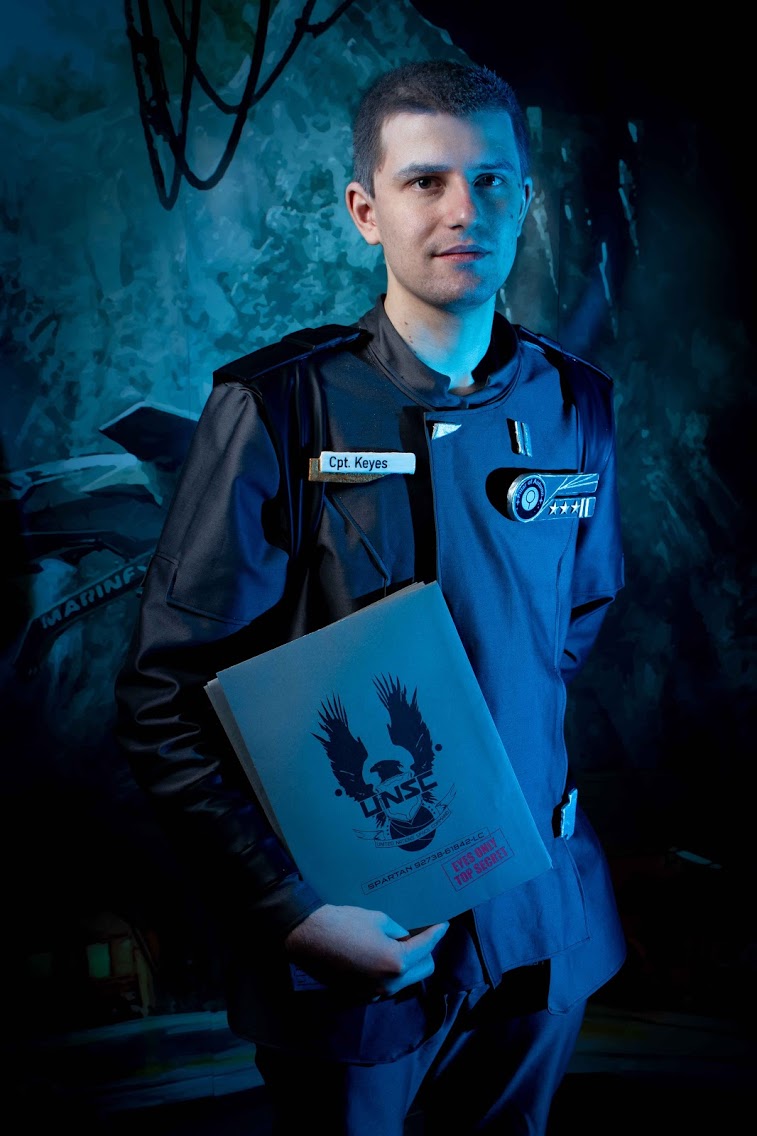 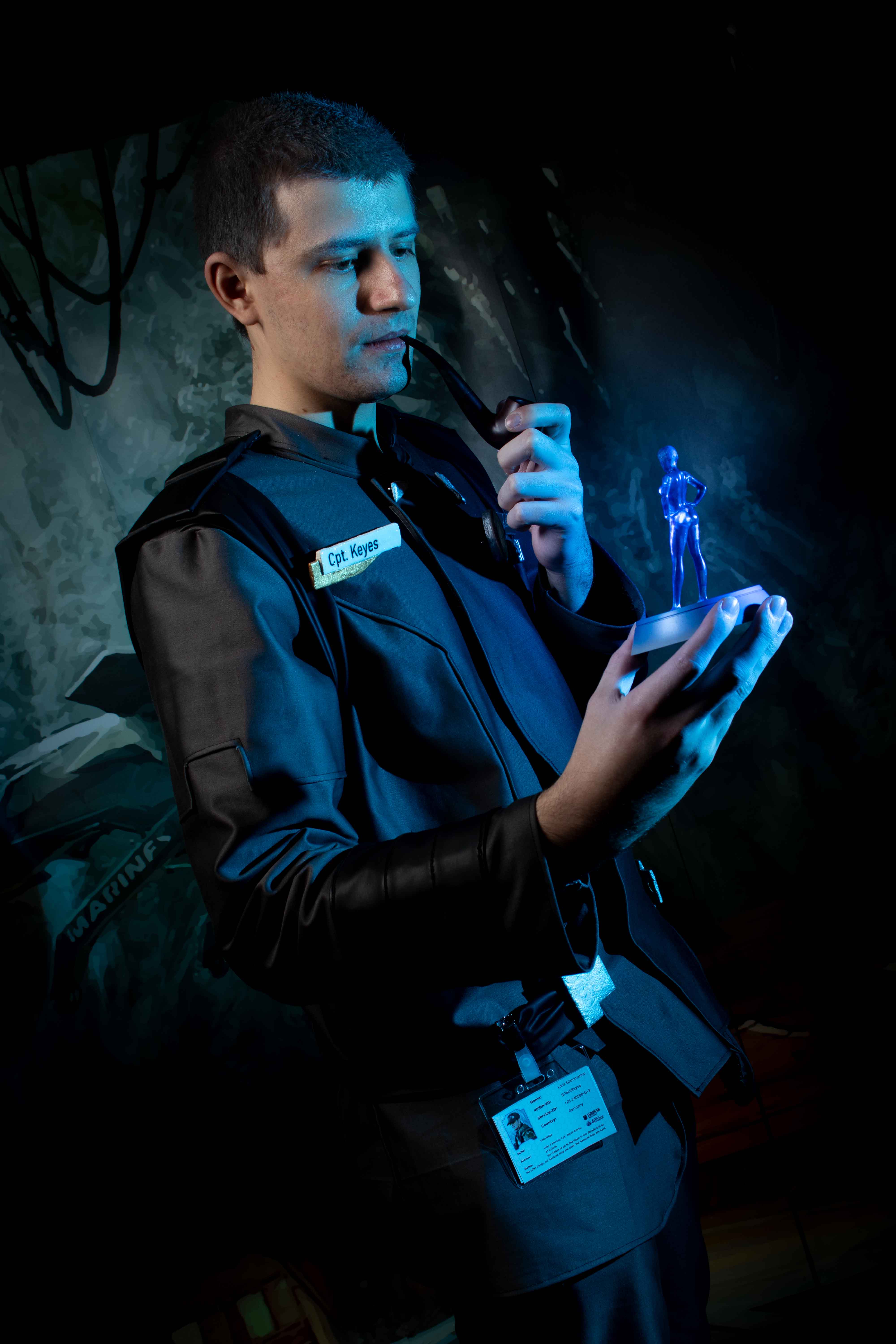 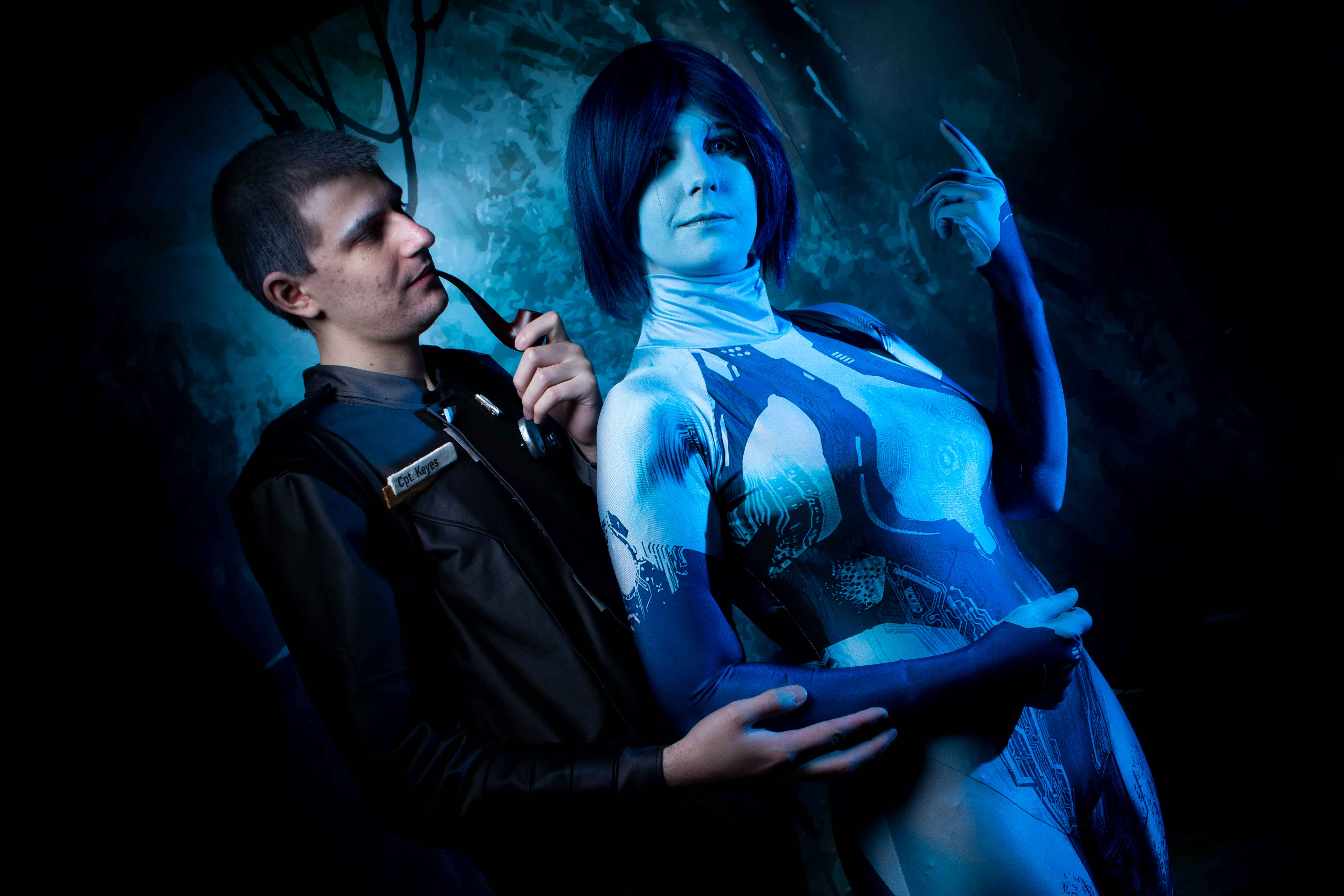 Cortana on last photo by me <3

Things i learned during this Project:

- printers can smell fear. They die when you need them the most
- look out for your seams! Trims your seams properly, even if you think "Ha, it's just a cosplay" Do not cut the sewing allowance too short if you want to skip the proper trimming, it will rip at some point (the seam in the middle of the back ripped during the first con xD)
- shitty cheap UV Resin is cheap and shitty
- crap laying around at home mostly is the best crafting crap

I guess we spend about ~40€ for everything, the fabrics were the most expensive part. Might be one of the cheapest Cosplays i've ever made


Bonus: I made a foam stick out of boredom two years ago. Remember Johnson's quote with the two sticks and the stone they had to share? Exactly this stick. And we're using it for way to many funny/shitty videos xD
So here is one of those videos with Captain Keyes and Escannor as our Master Chief from our only con last year

Dress uniforms are far and few between! That came out so well!

European Regiment
This Uniform fits so good.
And it have trouser pockets

Not often do you see such a beautiful d̶r̶e̶s̶s̶ ̶u̶n̶i̶f̶o̶r̶m̶ combat uniform.

After making this post I got the urge to remake all of the pins. Since 247District gave me his old 3D printer a few months ago I see it as a great opportunity to model those by myself and print them.

And is there any better idea for someone who always forgets how Fusion360 works than to start with the biggest and complex part?
NO! So i started with the biggest pin.
And dropped the original one while taking measurements of it. 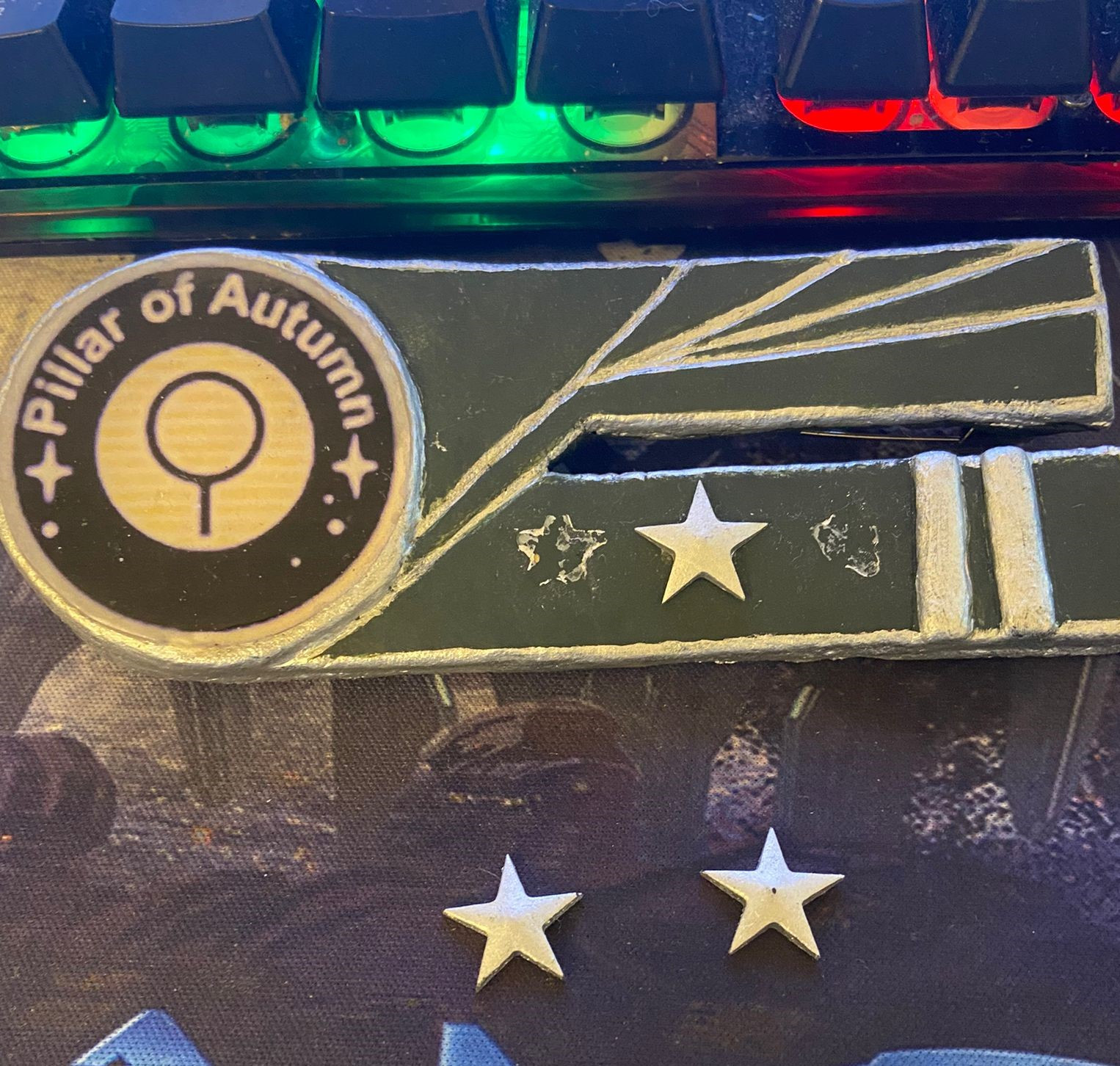 Since i made the original design of that pin with Fusion360, I still had the sketch of it, so i need to readjust the size and somehow make a model out of it. (Also I'm asking myself the hell was wrong with me, making the sketch, which i just wanted to print on paper, with Fusion and not with something like Inkscape)
Don't know how, but that's a problem Future-Nici will solve with the help of many Youtube Tutorials! 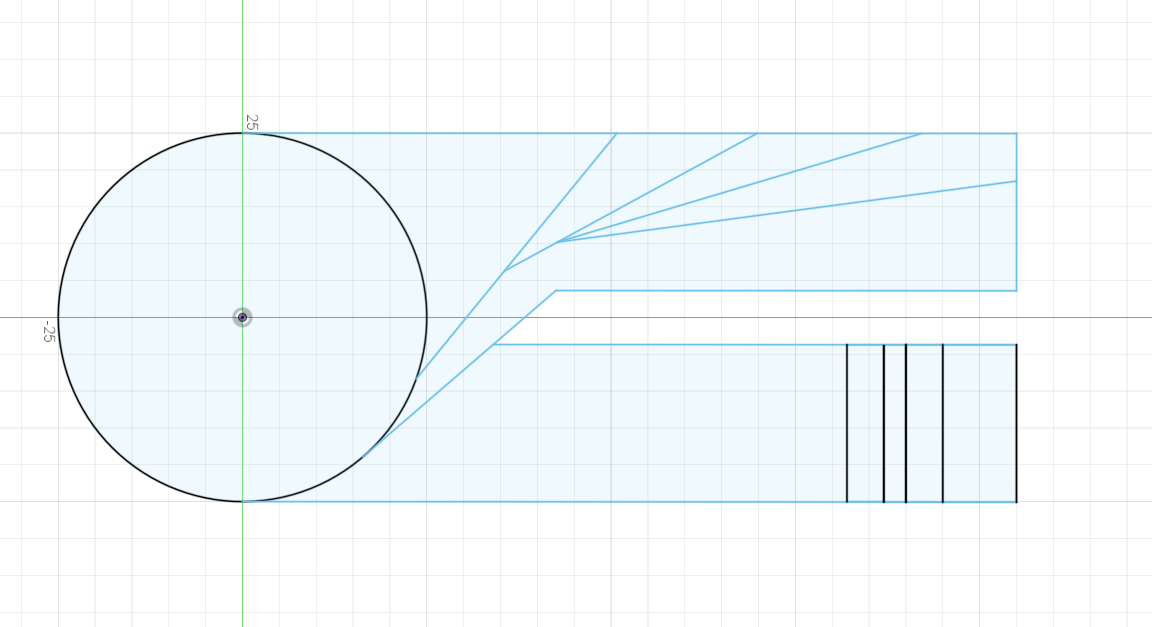 European Regiment
Faster than expected i finished the models yesterday and got to print them today!
Kind of proud of myself that i managed to make some printable models, some parts of my brain still believe it's some kind of black magic xD 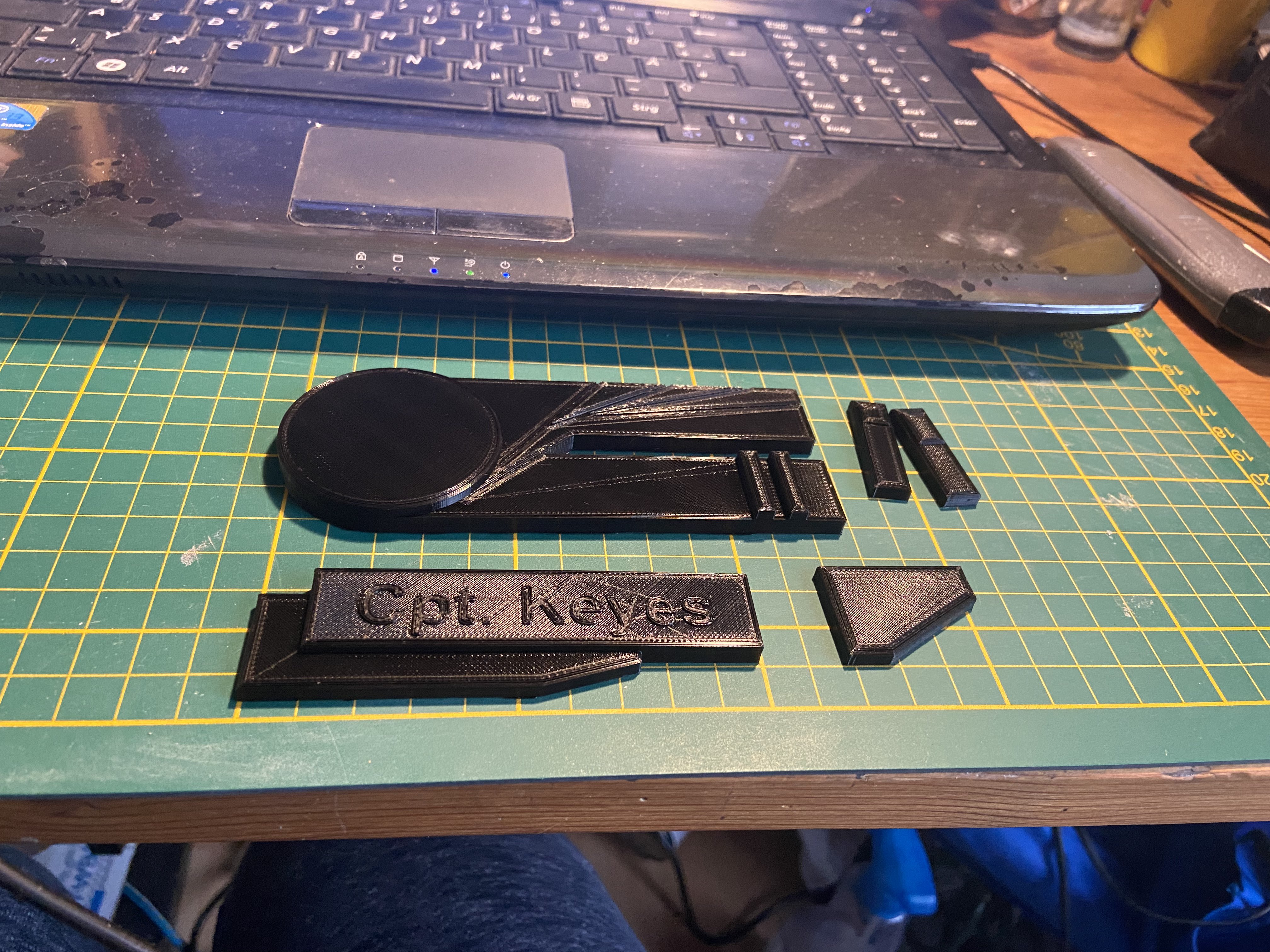 All these events got me motivated to pull out the "let's build something" mojo from behind the couch. Let's do some prep work for a marine.

All these events got me motivated to pull out the "let's build something" mojo from behind the couch. Let's do some prep work for a marine.