While this isn't my first cosplay project, this is my first official build. Although I've already started, I'd like to show you all what I've done so far and where I'll be going in the future.

I began by commissioning additional references for a Viper helmet redesign created by @Wernissage - The Art of Halo on YouTube, which I then began to hard surface model using Blender. 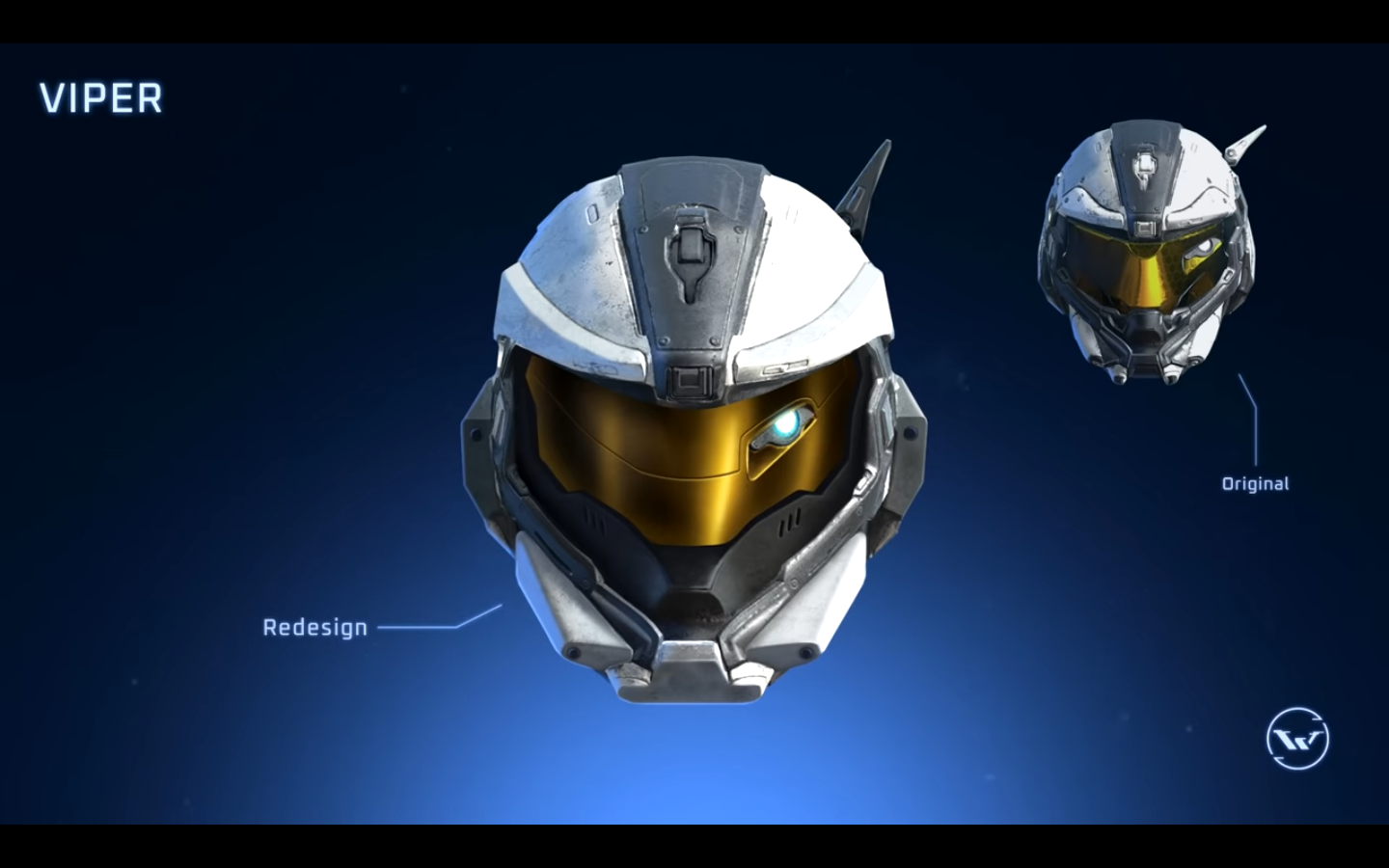 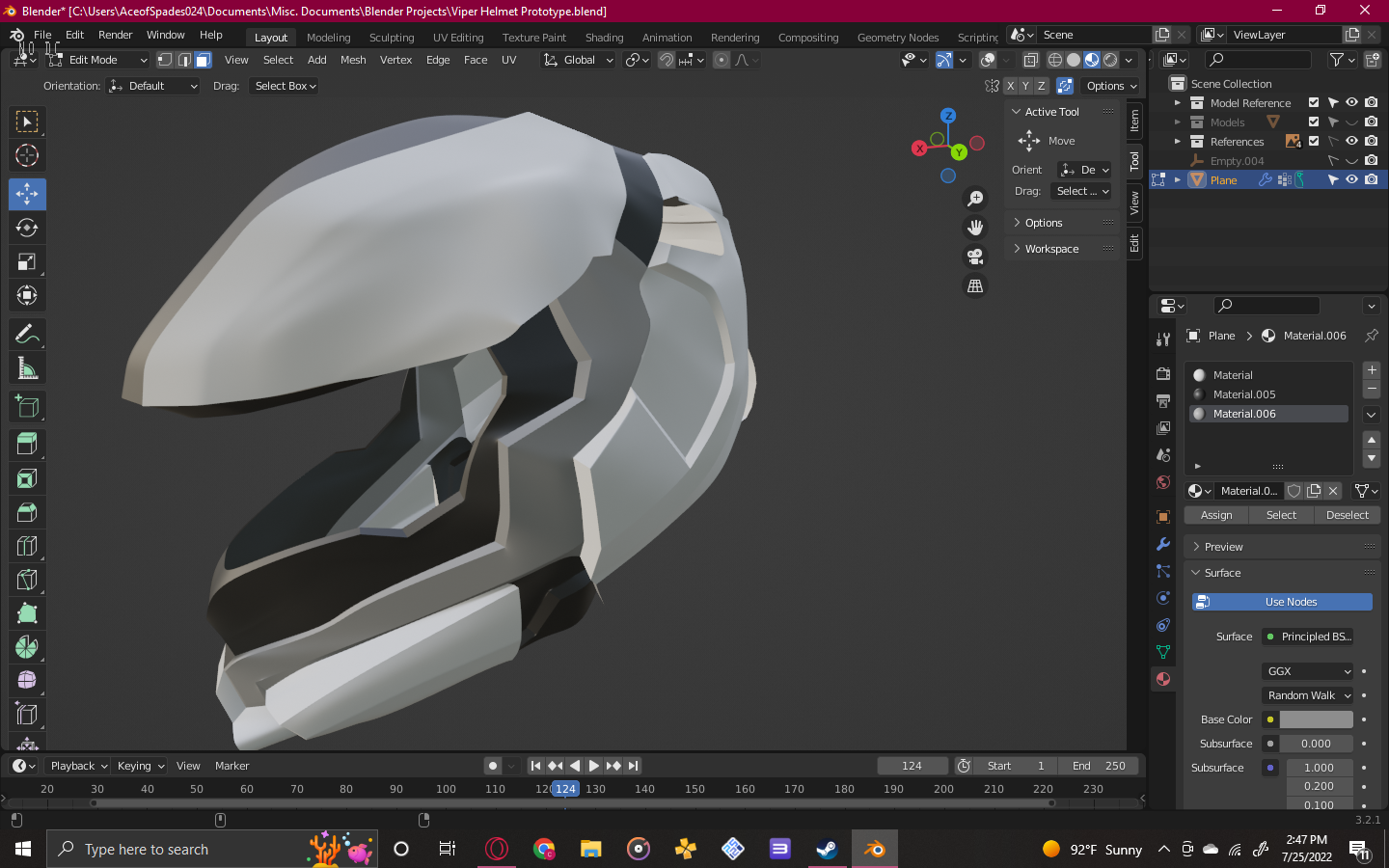 
Now It's very low-poly as of now, but I'll be using it as a proof of concept for the full armor set. Now I've allocated Mark VII Pepakura files from The Armory, which I've accurately sized using the Armorsmith scaling program. 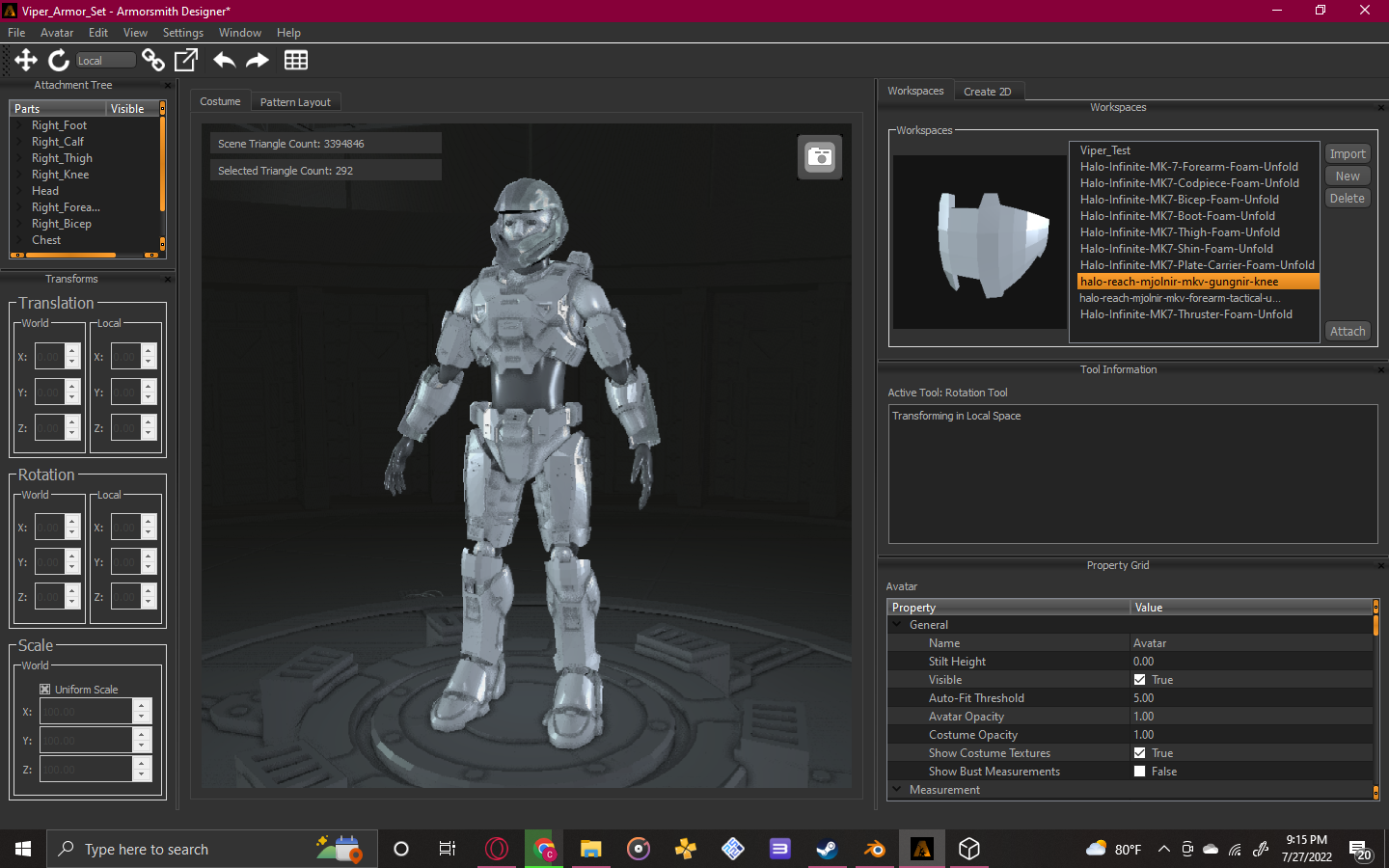 [Viper Helmet, on a Mark VII Base, with Gungnir Knees]


My next step will be to begin unfolding and printing the newly scaled files using the program so I can begin construction. After that, the project will be split into 2 phases.

Phase 1 will be considered the construction of the base Pepakura armor, along with continual progress made on the helmet model. (I might need some extra help with certain aspects of modeling, as I'm a relatively amateur modeler) Phase 2 will be the additional construction of attachments associated with my armor, at that point, the entire base armor should be completed.

My current priority in the production of this suit is the body armor. My goal with this project is to make a suit of Mark VII MJOLNIR armor, that will function both aesthetically and semi-practically. To aid in production management, I've devised a list of materials and armor components I will either need to replace, purchase, or fabricate. 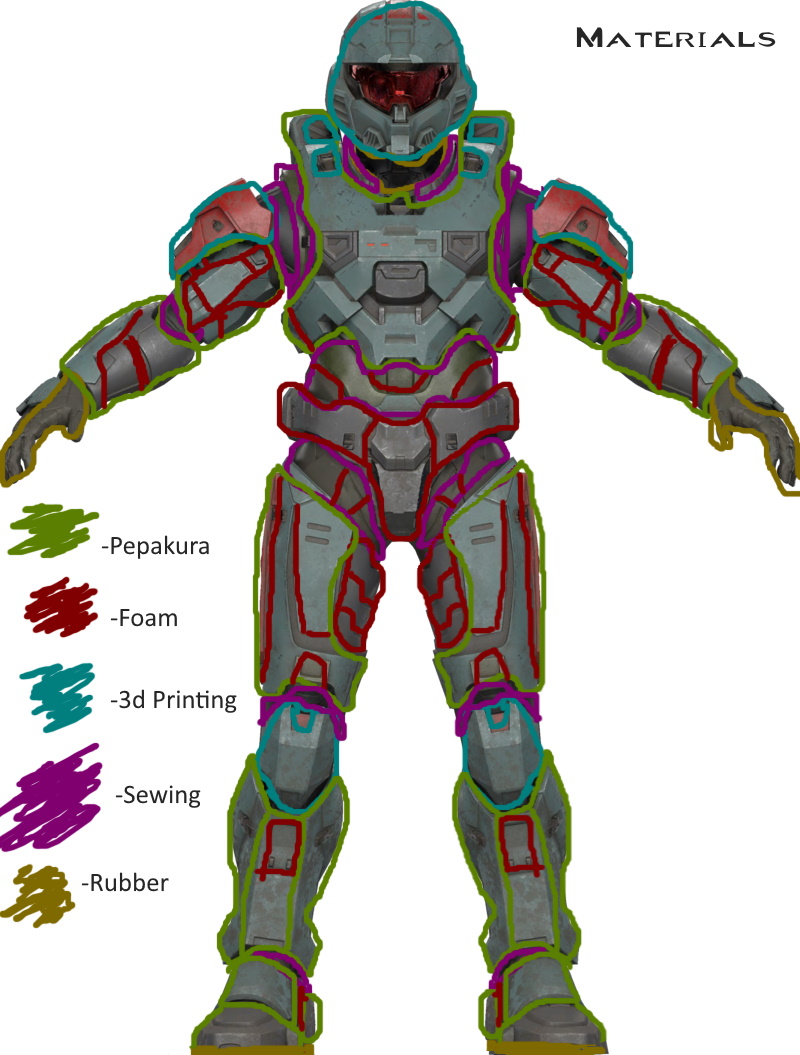 [Materials used for each Armor Component]


Here's a list of the processes/items I will be using in the production of this armor.

Colonial Regiment
Now this is taking hybrid to the next level! It'll be interesting to see how it all comes together.

So I finished my initial Undersuit sketch for the suit. I want to make it a universal as possible, which will allow me to theoretically swap armor cores within a few minutes. The goal of the suit is to not only add more *girth to specific parts of my body, but also increase my height to allow for a more canonical Spartan representation. The suit will utilize foam inserts, backpack clips, sewing buttons, and Velcro to both change Undersuit detail, and adhere armored components to my body. 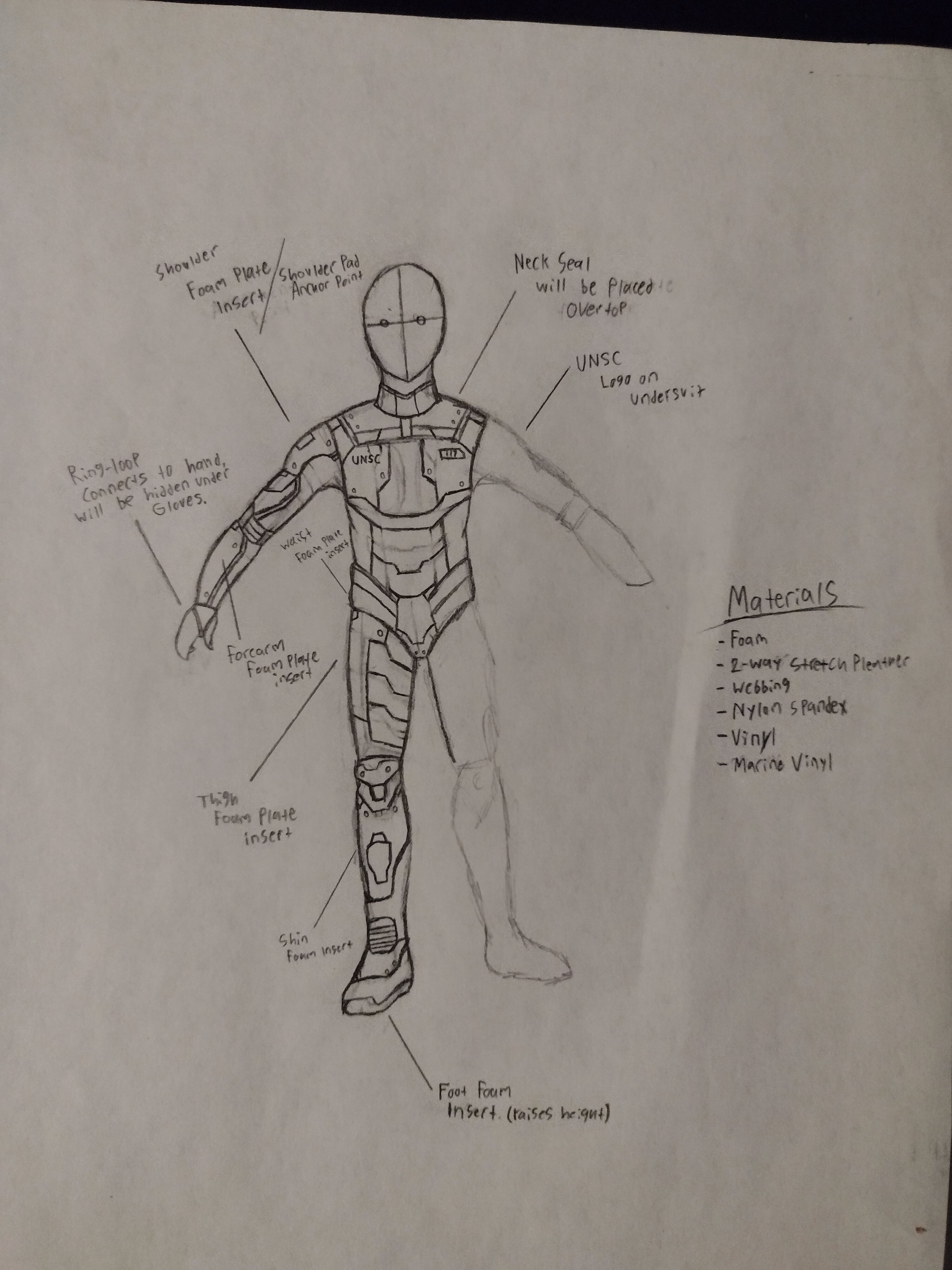 Credit to Electraknite for my design's inspiration, I've been looking at a bunch of her threads and videos for reference and inspiration in my design. Her tutorials have been a big help in considering my design process and I greatly appreciate all she has taught me.

No major new or new pictures today folks. (I totally didn't forget to document anything) But I have officially started fabrication of the chest piece after manipulating and modifying the in-game models assembled by Surasia and @Average Goblin Enthusiast. I decided to split the model into about 5-10 pieces. The abdominal plate will be mounted separately to allow for increased mobility, & the thrusters will be removable to allow for easier storage.

I should have pictures and maybe even some videos for you guys by next week!

I will be watching closely. I wanted to try the same design of undersuit and am curious to see how this turns out.

Pacific Regiment
This looks complex. Can't wait to see how the suit comes together.