So this is is my first attempt at creating resin/bondo armor. But i went a little bit different route than most, I'm using foamies as my base instead of the pep board. I've made several pieces of of armor out of it before so i figured it would be my best shot at crafting what i thought the armor should look like. It's very time consuming...

so if you don't know who/what Tyrael is, he's from the Diablo series blizzard made.
This:
http://us.blizzard.com/diablo3/

I realized very early into this project that it hadn't been attempted many times before. In fact a google search turns up only 2 finished works and half a dozen in progress works with no pics.

Then I noticed that i was having a REALLY hard time getting concept art. It's actually pretty hilarious, but the best art i have is a complete character turnaround from a mod in oblivion where someone actually made the armor for the game.

So i've been working a few months now and I'm starting to get the hang of it I think and I thought i might as well post up some progress pics.

I'm not certain but I don't think I've seen any completed work here that used foamies as a base and bondo/resin on top. I actually asked the question a while back of weather or not it was even possible. I'm not sure who did the video but there was an experiment done on the foam and it warped as the resin dried, essentially it made the idea seem worthless.

Here's a few of my early prototype works of shoulder armor that I think worked out just fine.

here you can actually see the layers bondo/resin/foam. works like a charm. 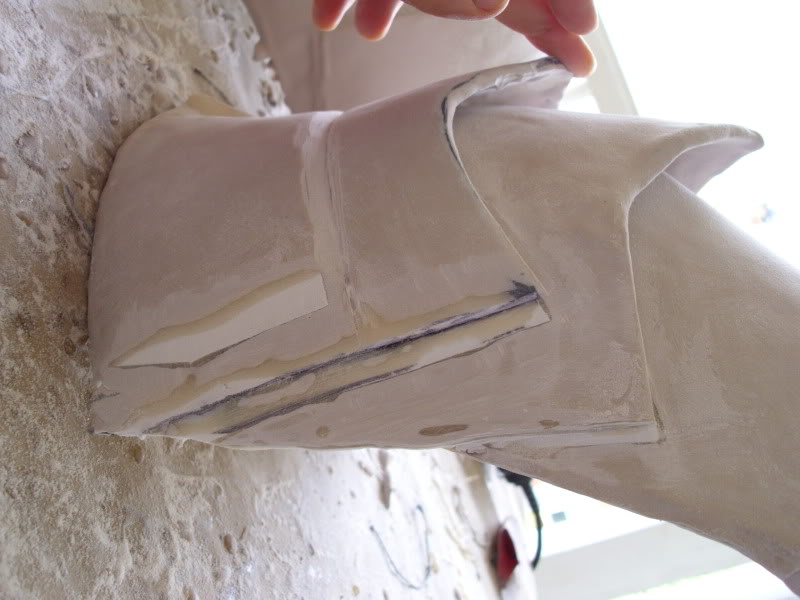 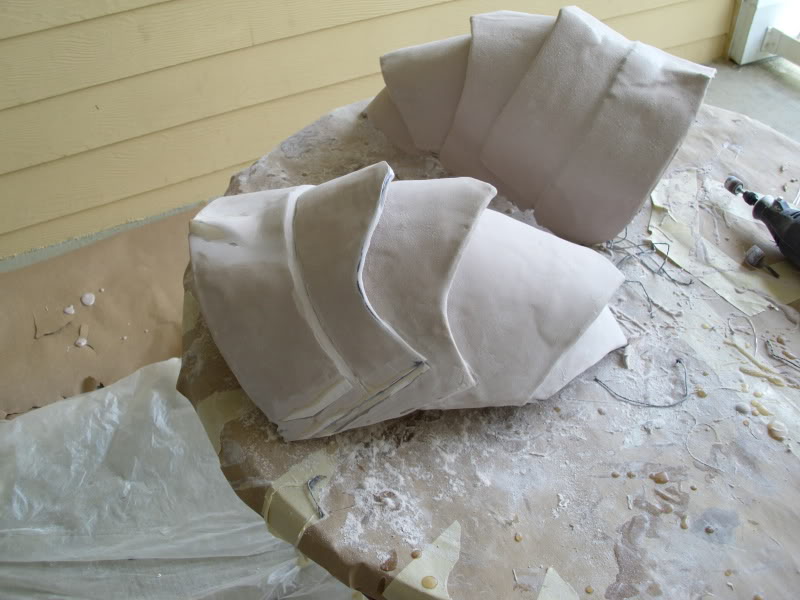 I think the image i have of how i want this project to look when completed is very much in the spirit of the Joe Madureira's and Paul Richard's of our time.

I wanted to get the armor looking hefty, almost irrational, but still functional.


I'm at about 80% of the foam base work now and I'm getting excited about getting some resin on it and detailing it. 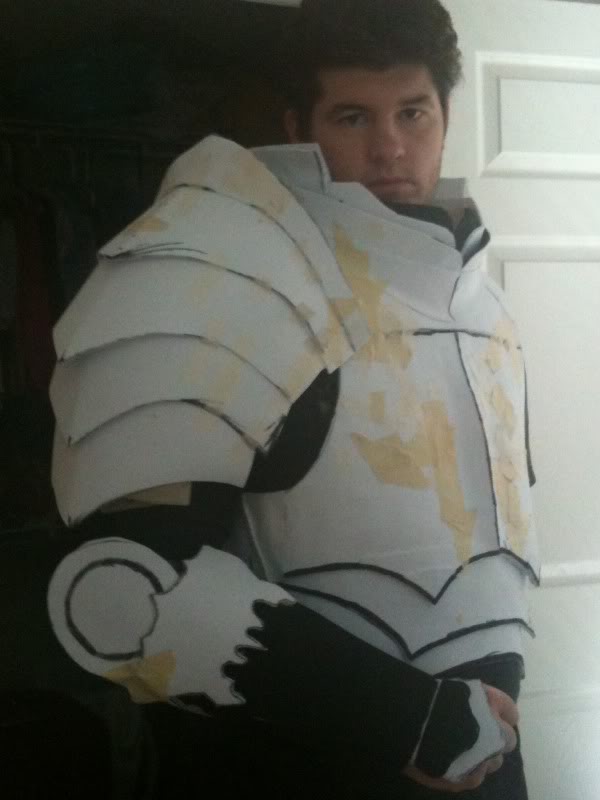 And one of the front on my homemade Mannequin: 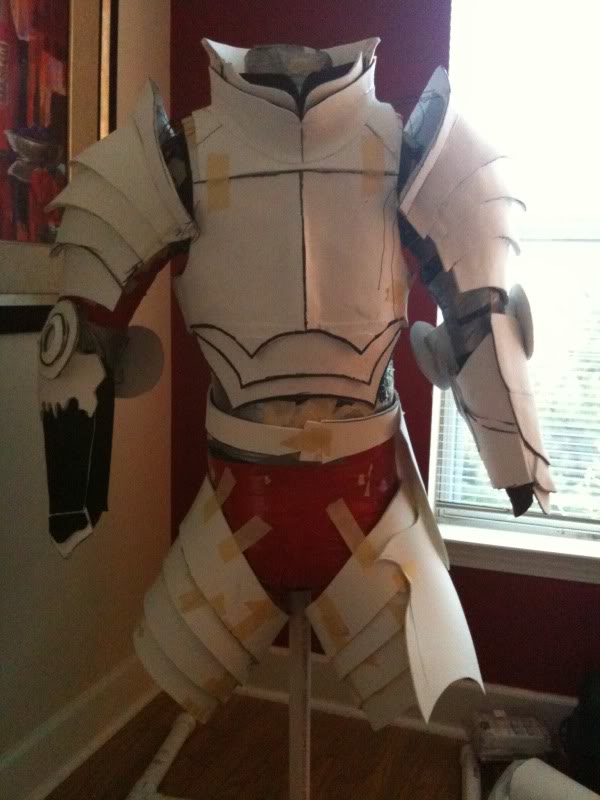 I'm still contemplating wing construction, and the boots are going to be hard to pull off because of the immense detail.

I'm wondering about strapping it all together. I think i want to go with a webbing harness and just clip pieces into it, if anyone has any insight i'd really appreciate it.

If anyone has any feedback or comments I'd really appreciate those too.

Gawd DAMN! i thaught id never see Another tyrael atempt... let alone a WIP! i like your aproach... i was going to fully model my tyrael costume from clay and cast it... its a rather massive costume to do because it has everything from chainmail to leather to armour...

i agree the boots are gona be a BITCH! im not 100%sure how ill do them when i come to it... but my biggest concern is the wings... last thing you want is just a simple EL strip in some clear tubing... it looks feeble

i look forward to seeing some more updates on this, i cant wait to get some money together to start my tyrael
F

This is looking awesome! I think I've only ever seen one Tyrael costume before, and it was in a blurry Blizzcon photo. Looking forward to seeing more progress, and best of luck! Especially with the crazy wing things...
S

Indeed it is a very challenging project, however i was going to take a few liberties with it.

First off the wings are nearly impossible to pull off without looking cheesy. So I'm focusing on doing the smaller spiky wings on his back, hopefully with LED's to illuminate them.

Second, I was thinking more along the lines of Tyrael's design from Diablo 2... Meaning that I'm going to exclude armor around the hands and the chain mail around his thighs. In D2 his "Skin" is just black mass in the shape of arms/legs/etc. So black undergarment solves that.
K

cool, when i do it ill be using fancey leather and making chainmail etc really want my tyrael to be one of my best costumes.. the spikey sun thingson his back, i dont think those are wings... im using the same reference pic as you, if you remember he can retract those angelic wings of his so you wont need to touch them it would look badass if you have a white glow coming from your back though, in between all the gold armour spike things.. (i plan on making those from a painted foam so its consafe)

i was also thinking of creating a glowing white sword by making a mould and fully casting it with a clear frosted resin & 1 strand of EL wire down the core. i think that would be INSANELY hot XD

ill be modeling my tyrael soon in 3D since i cant afford the clay to go with the original plan. if you like i could send you unwraped leg pep files when i get round to it.. theres some prety technical bits because of the big strut that joins the heel to the calf
S

Yeah he uses those wings like arms almost very weird. I have an idea on how it might be able to work, but the logistics are a bit crazy.

I think you could use a mini fog machine to produce the wispy effect, and to contain it make cellophane tubing in the shape of the wings. The fog will inflate the wings and to give it structure you just run some wire and light it up with a delay timer so it looks like lightning. Now this is incredibly expensive... Foggers like that are like 1k i think. And of course you would need to make the wings wrap around you slightly to be con safe.

I have a full tang bastard sword i've used for other costumes, i was going to make a mold of that and i wanted to do the same thing, light it up with LED's or something.
K

Sweet so whats it made of
S

The White armor on the stand and that I'm wearing is craft foam.

I used mostly 2mm foam that you can buy in rolls at most craft stores. The great part about the foam is that it stretches with enough force and doesn't tear easily. Only problem is that 1 layer of 2mm foam isn't sturdy, you need at least 2 layers to have a sound structure. On top of that I use hot glue instead of elmers because it dries faster and the heat makes the foam easy to manipulate into a curve or bow, once the glue dries the shape holds.

The 6 mm stuff is great for big area parts that don't need a lot of shape.
K

cool u use a pep file on it
S

No, i don't think there is a pep file for it. Mainly b/c there has never been a 3D model of Tyrael made... Just a fan build for oblivion i think, and even that isn't perfect.

I've done everything by just eyeballing it.
M

looks awsome. If I saw that in battle I would poop my self.
A

thanks guys, i appreciate the complements.

I'm hoping to have this guy done by Dragon con, last year was my first year and I wanted to step up the costuming for this year
K

hmm, well im a 3D Animator.. XD ill make a model soon. only problem is a lack of refference for his back!

i dont think you can particularily buy frosted clear resin.. i think what you do is just buy a clearcast casting resin and then either sand it or add a non soluable substance with the apearance of salt then sand it... O_O but it would look INSANELY sexy if done with a sword and EL wire runing down the middle... the EL battery pack could be in the hilt which could open up.

i like your craft foam method, i was going to use that same method to do a haz suit from Half-Life last year.. but i done halo armour instead because the resources were so easy to get info on i think your best option for doing the boots will be either hard casts from a clay mould or pepakura & fiberglass so they are totaly symetrical and will work properly..


Surely quote of the week if not year right here!!!! I salute you sire haha ;D

I can't wait to see this completed costume.

"Fool! You have just ensured the doom of this world. You cannot even begin to imagine what you've set in motion this day!"
F

I LOVE Diablo 2!!! I have never seen anyone make this armor yet. Can't wait to see the finished product.

third attempt on an ODST helmet and first for ODST armor