Alright, so my best friend and I have decided to start making halo 2 stuff, hes a master weilder, and I do alot of sculpture, so we've got differing styles....

He wants to dive head first and make a full metal spartan suit for the first project, whereas, I think we should start small, with a weapon and such....

SO whats a good starter project we could work on?
A

Those who make suits from metal, skilled or not they all quit, we've had tons of people try, they never respond back, and if they do, they usually turn to the pep or molded way.
S

I did a metal Stormtrooper helmet... MC looks simple enough. 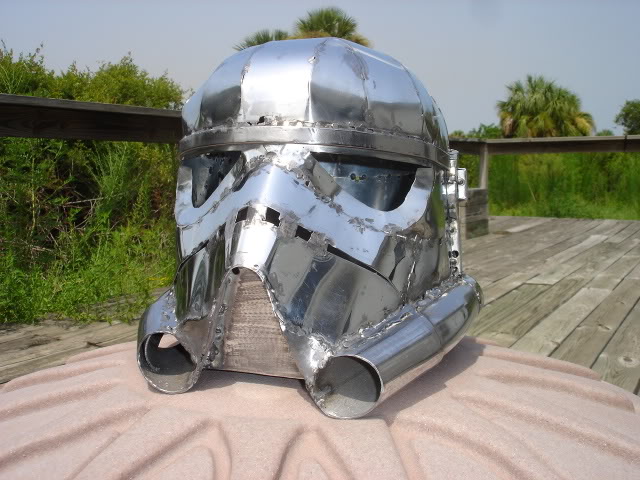 the trooper helm looks recognicable, however, it obviously isn't up to the same standard in terms of looks as one done with conventional methods, it looks good though.

The thing is, after seeing that helm, I just had the idea that a metal suit is feasable, so long as you stick to making a skeleton. What I mean is that, just like that storm trooper helm, if you could make the suit, with just basic detail and structure out of metal, you could use that as a base and apply all the details and curves and such you need with things like body filler and stuff. Anyone ever try it that way?
S

Thanks, I was going for a medieval look. I wouldn't try that kind of work just to cover it up with bondo.
G

geoviper34 said:
could u tell me how to put a picher up when u tock
Click to expand...