Hey Everybody! I been doing a little armor work here and there for the last few months and I thought I'd start up a progress thread. So, the foam armor from last year is holding up well, but I'm making some replacement pieces, particularly the chest and helmet which were oversized. I'm also making a totally new set for my girlfriend for this up coming Comic-Con. I guess I've got roughly 5 months to finish, and hopefully if I pace it better, I won't be so crunched like last time...

In any case, here's some progress shots!

So I built two new helmets for myself and my girlfriend. I actually got them both resined, but looking at them now, I think they're nearly the same size as the old helmet. 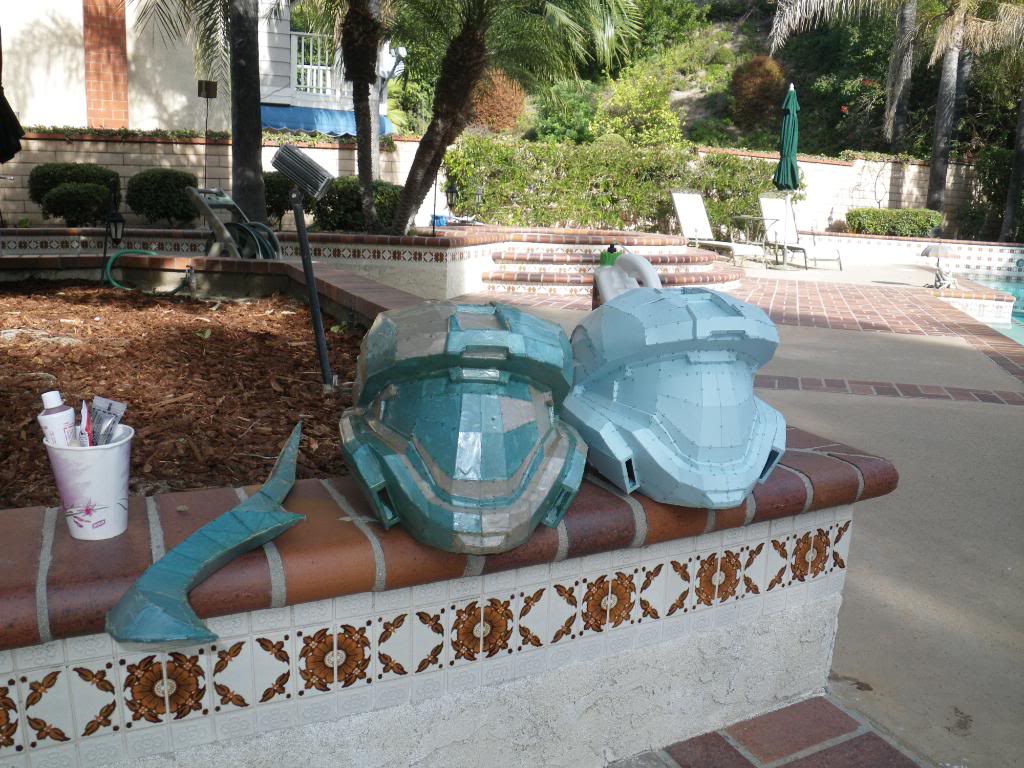 I ended up making yet another smaller helmet, but I'm still having trouble telling if it's smaller. *sigh*. If this one still is too big, I've got to make TWO more smaller ones and now I've got mutiple rejects that are just too big for me. 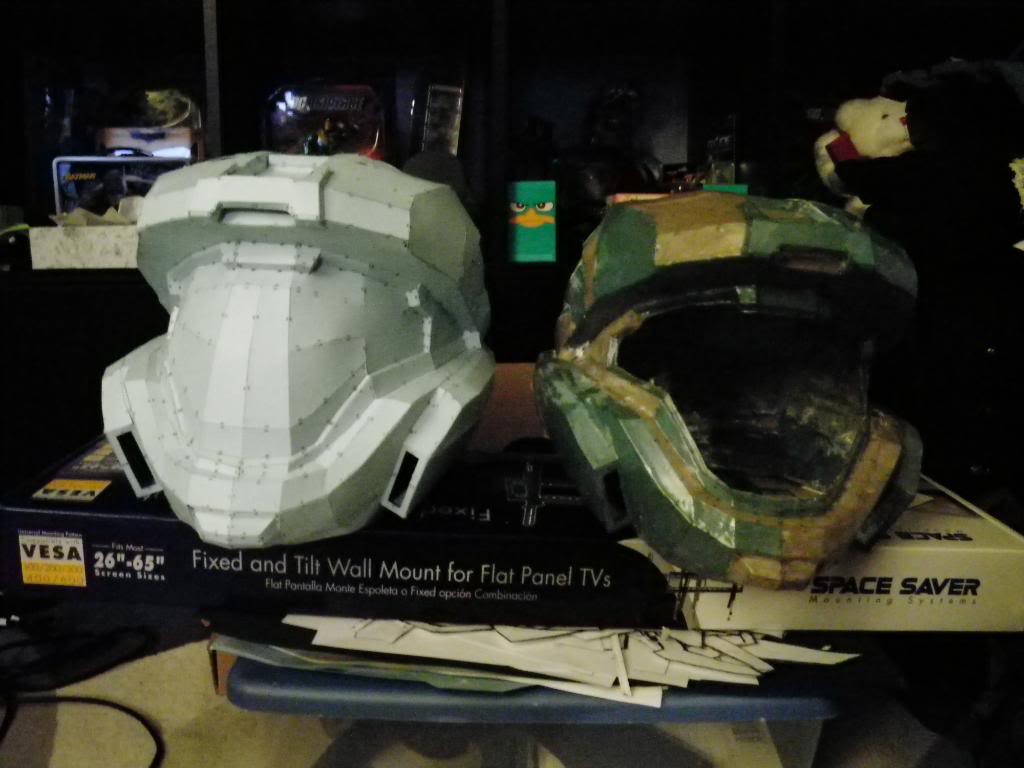 On the brighter side, the chest plates are complete and I think scaled much better than the supersized one from last year: 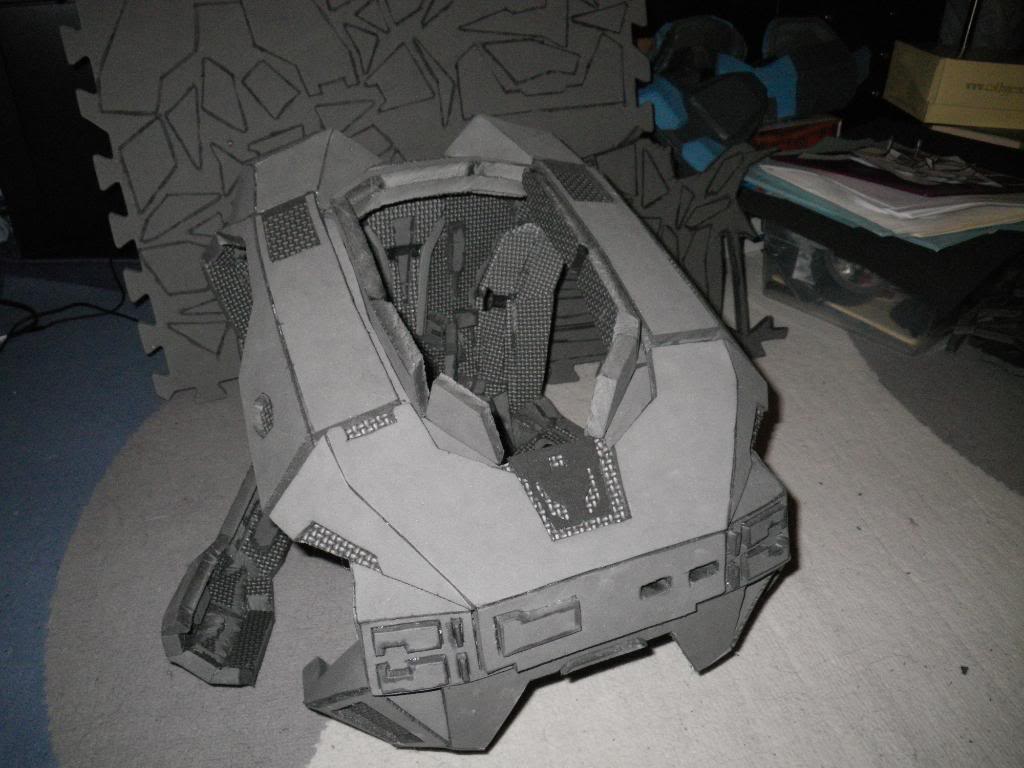 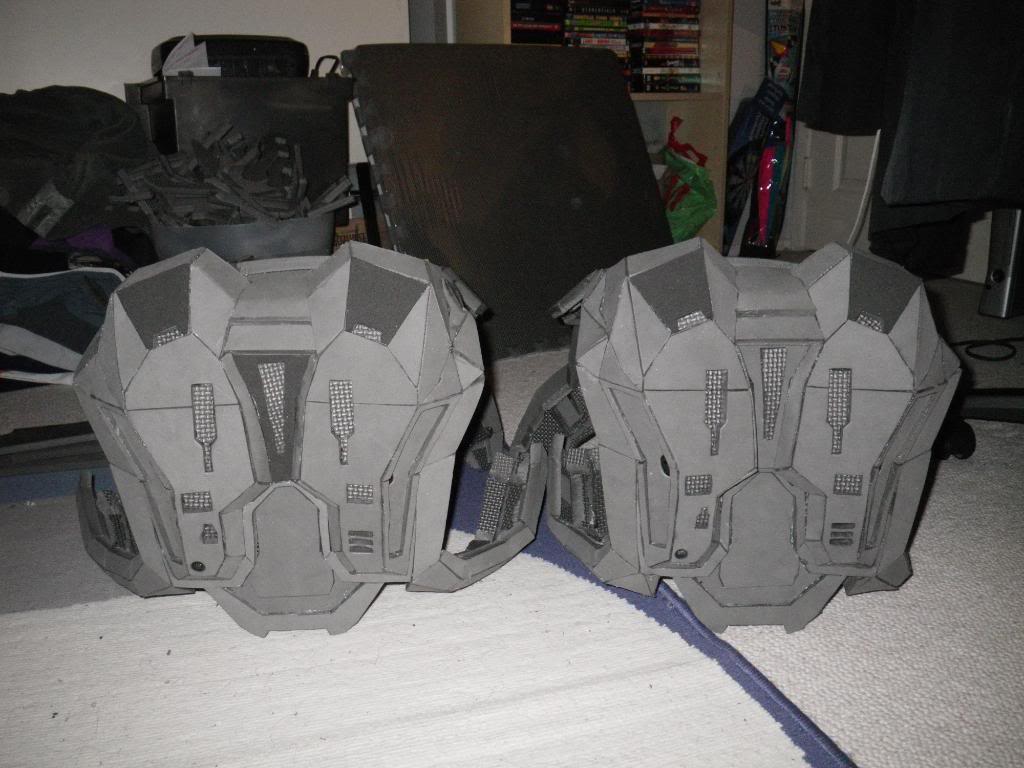 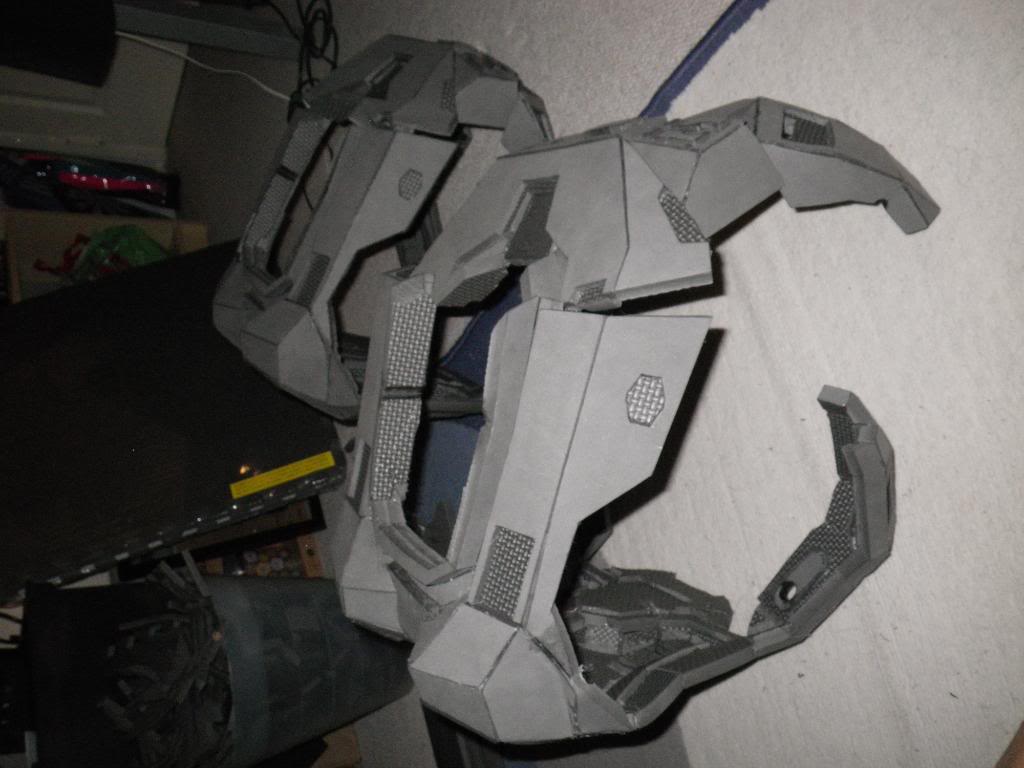 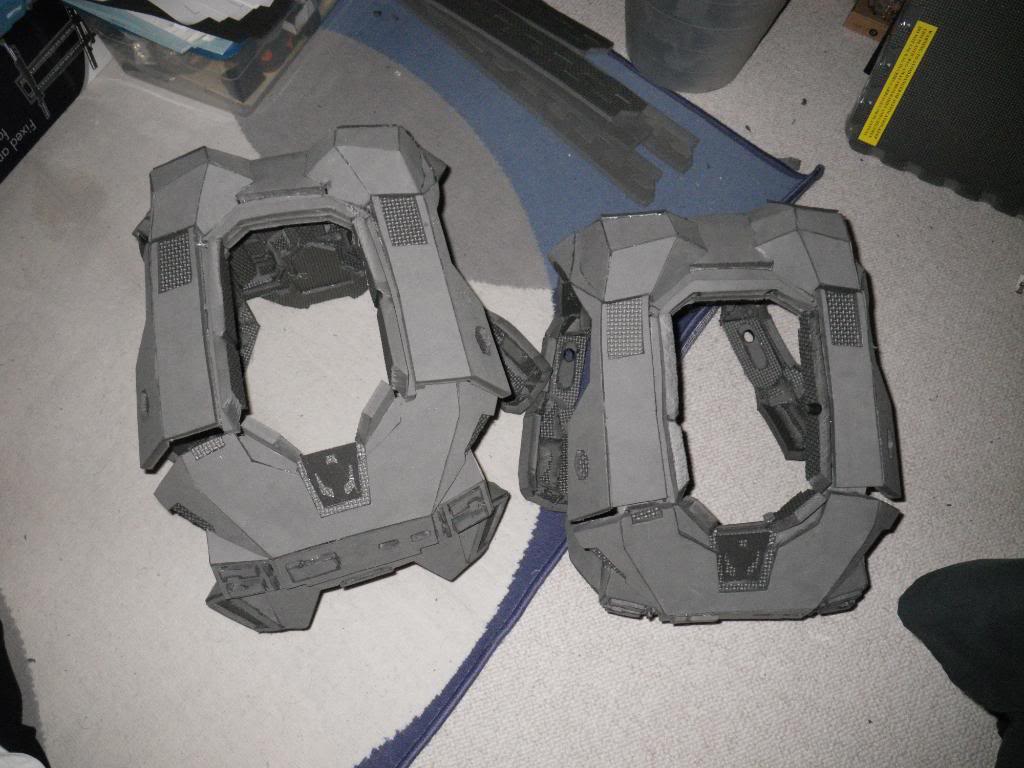 The chest plates are composed of two pieces each, the front will be able to come off/on more easily than the other chest plate. I'll probably rig up some straps or magnets to join the two pieces together.

Also for those interested in the progress / minutia of armor making, here's a shot of the foam mat before I cut it all out: 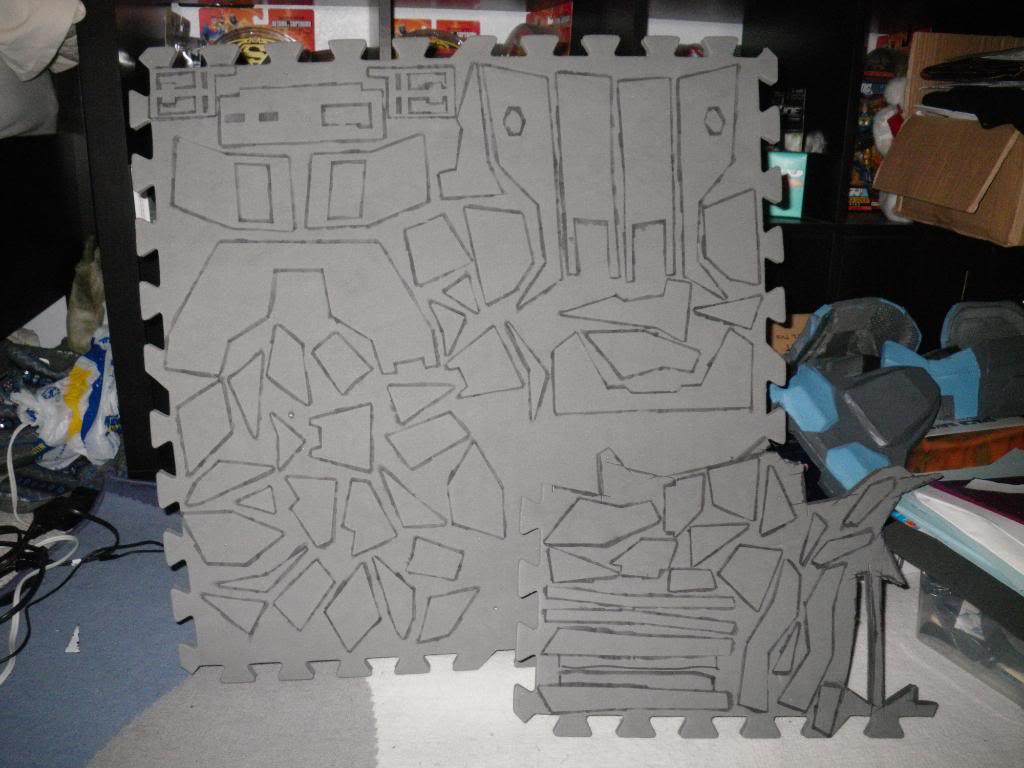 and, for those interested, I've been working up getting pieces to bend inwards without needing to cut and glue two pieces together. At this point, I make a shallow cut on the inside of the piece, then burn the foam with the barrel of the hot knife. It carves a nice little canal that makes it easier to bend: 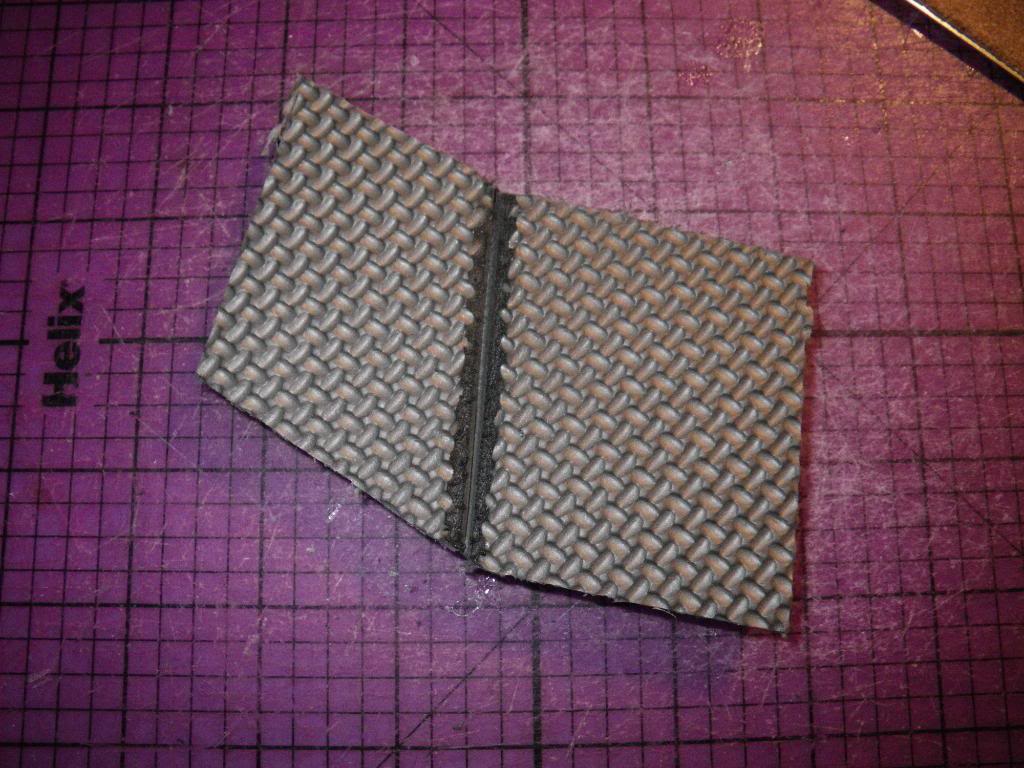 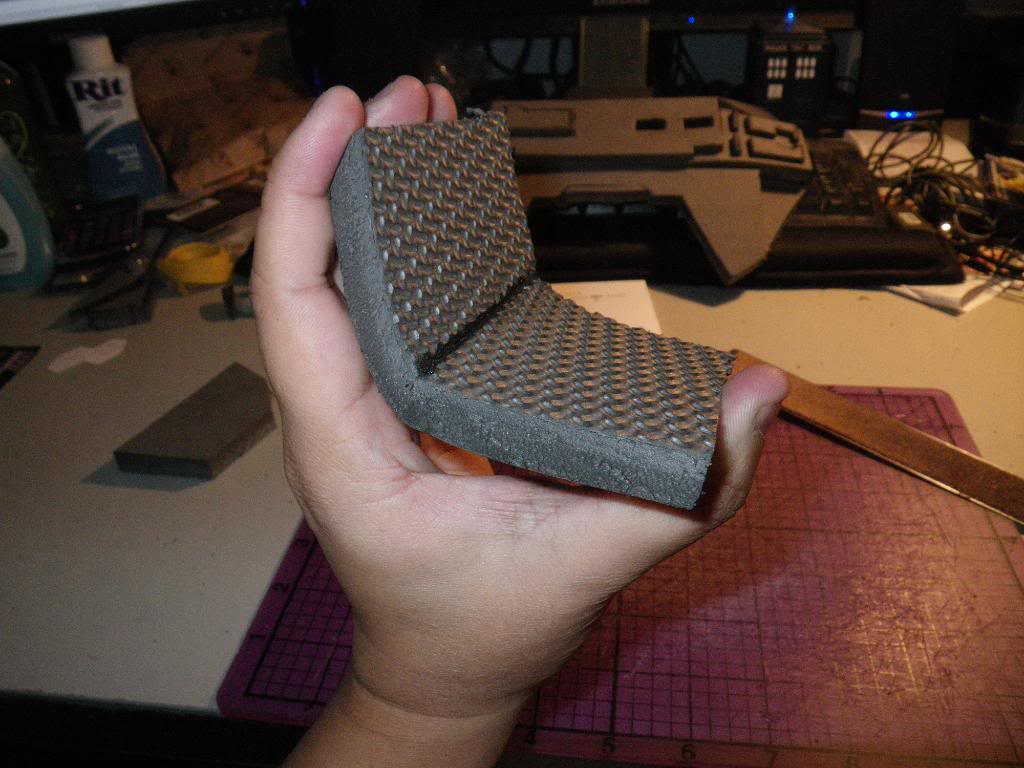 Nice foam work. Best of luck with the rest of your builds.
M

Southwest Regiment
What vshore said! looking fantastic, I've been thinking on going foam myself for another suit later on. keep it up!
T

Nice job so far, the chest pieces look fantastic. I definitely need to do some foam work next suit lol.
A

New to the pepakura, old to crafts... but I am overly impressed with the work and detail that goes on with all of these builds. This foam is a beauty and I want to try it, but I'm not sure I've mastered the card stock to begin a new medium. I am hugely impressed with the pics, great advice tips too, will note them down for later.

keep them coming so I can learn more
A

Mountain Regiment
Dude! You must teach me how to work with foam! XD!

Thanks guys for the comments!

I definitely want to get this done by comic-con, but I've got the added wrinkle of a tight budget. We've decided to save up for a mortgage and armor production kinda falls to a lower priority. Hopefully, I got so much spare stuff sitting around from previous years of making armor I can hopefully manage the new suit without spending much more money. Considering selling off my old ODST armor and maybe a few spare Air Assaults to help fund finishing this one.

At this point I'd say I prefer working with foam over pep. It takes a little more forethought when you're initially laying out the pattern, but I think it's overall faster than pep. Especially since you don't have to go into the endless sanding/bondo cycle that I tend to get stuck in. Plus, less hazardous chemicals and/or dust particles floating about.

And if anyone wants to add me on facebook, just send me PM

finally, here's Crazy Ben's Air Assault Emporium. Due to a garbled slipspace message we're overstocked on Air Assaults and I'm passing the savings onto you!!!! 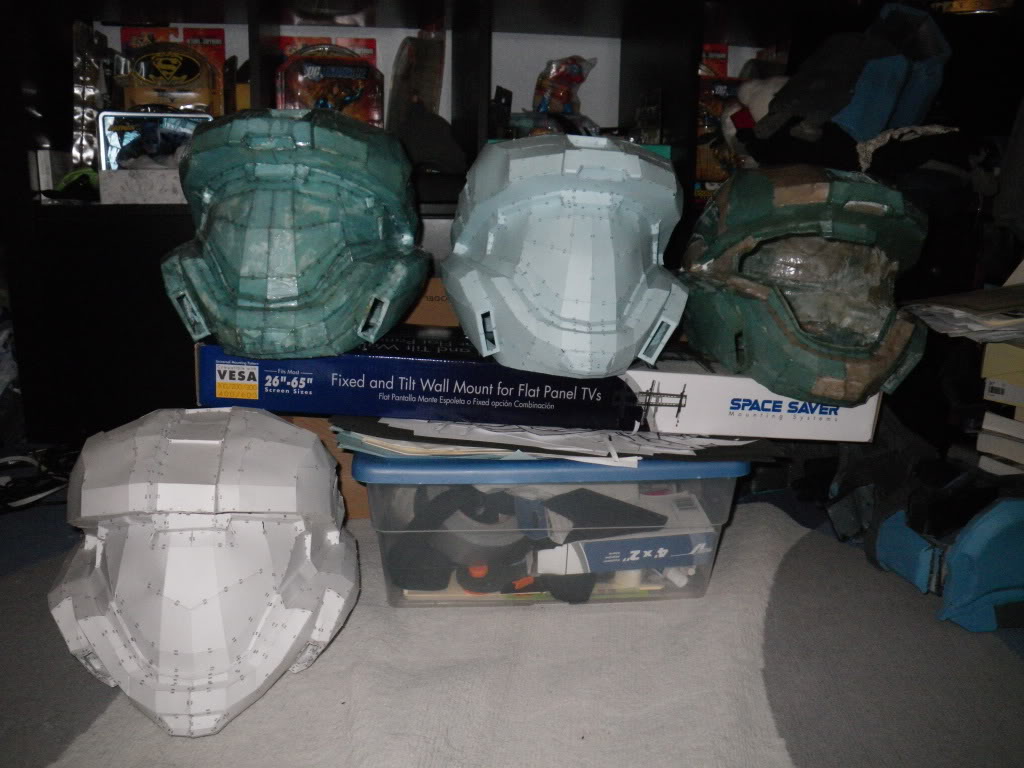 Got the shoulders done, still make to the add on for shoulders, but I'm happy how they turned out. I finally got the heat gun out of the box and now I've got pretty curves!
Since this set is for my girlfriend, I think I'm getting slightly jealous as now that I've gotten the hang of building these pieces, her shoulder pieces look much better than the ones I made last year. I just might make a few replacement pieces for myself... Of course, that would totally stretch my budget and these days I'm trying to finish this without needing to spend more than the materials I already have at hand. Hopefully my ODST armor will help provide some funds, but I'm not really counting on it at this point. Anyhow, here's some pics! 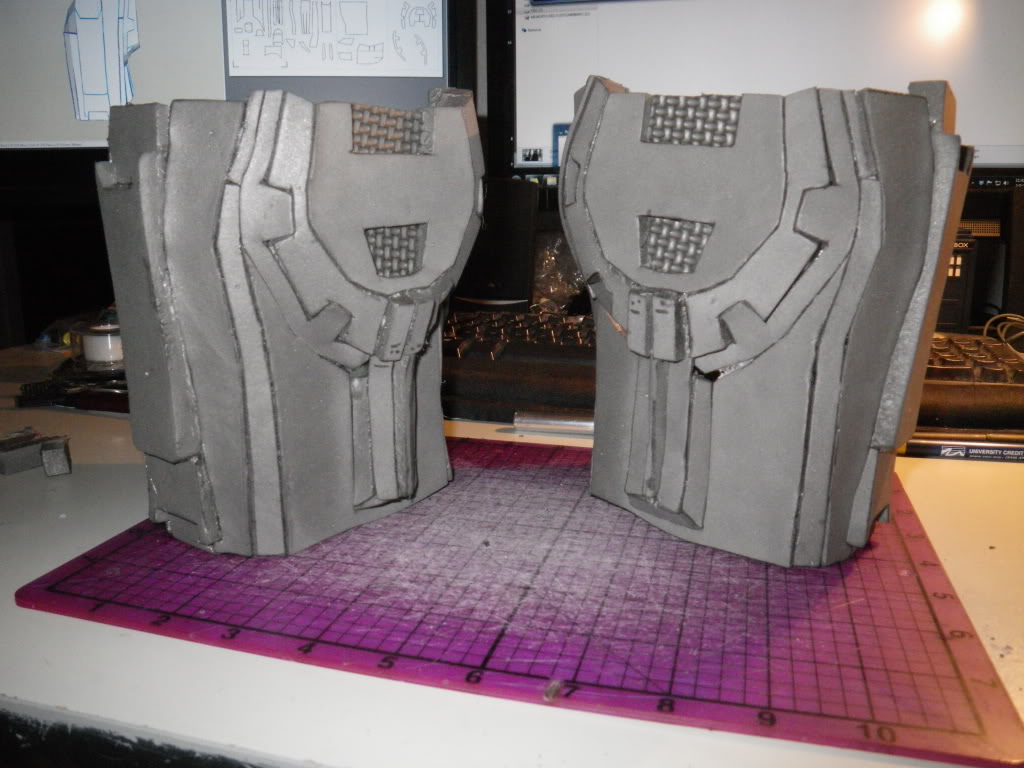 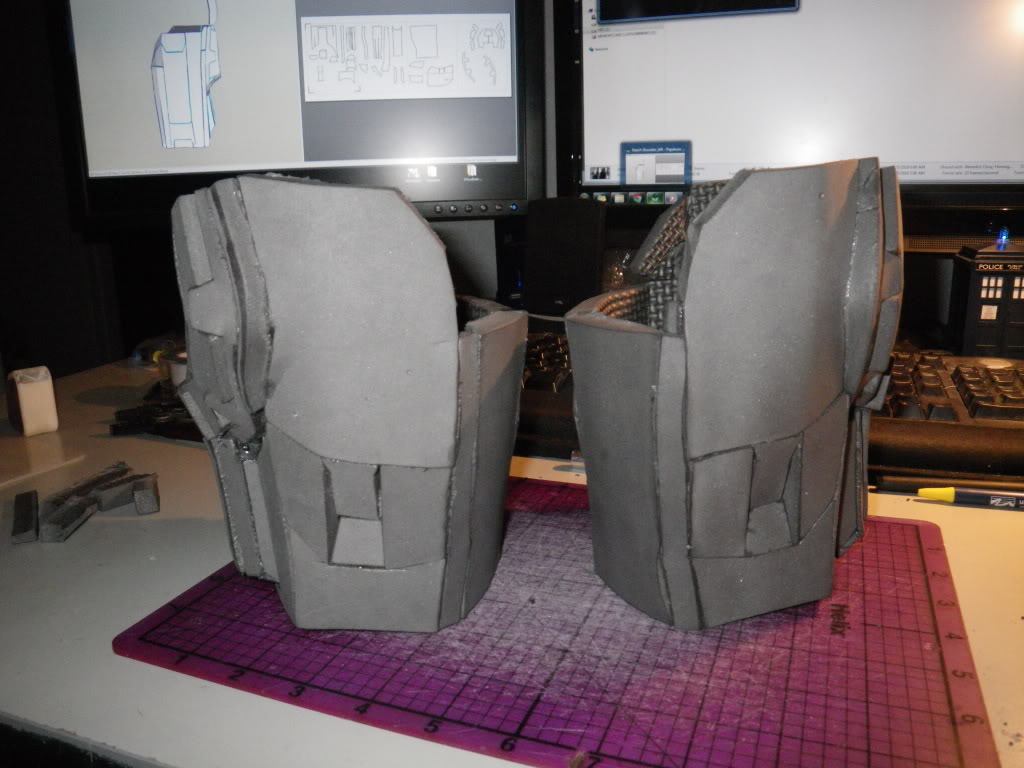 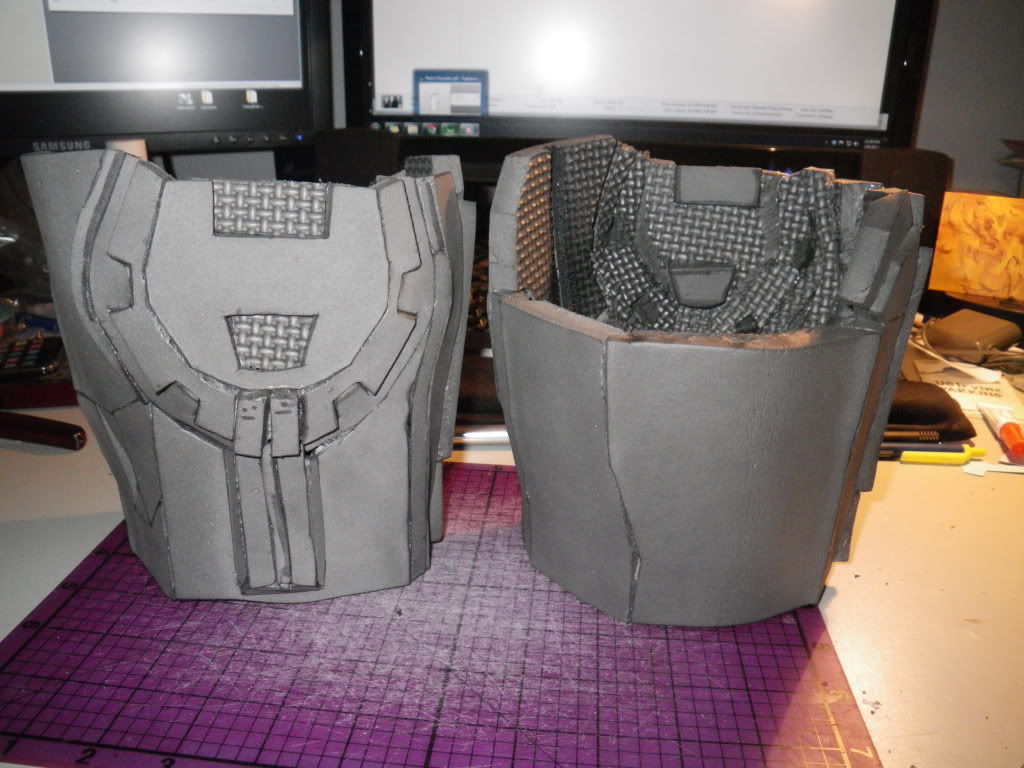 Traghatti said:
Hey dude! Keep up the good work! Hope to see you guys again at Comicon '12
Click to expand...


I concur entirely with this sentiment!
S

Hopefully I will get this done by Comic-Con... Been trying to minimize buying anything new and just trying to work with the materials I have at hand. Thankfully, I picked up a ton of foam mats a while ago. Probably going to have to open the wallet when it comes time for plasti-dip and paint. My girlfriend wants to have the zombie colors from Halo 3, which I think is a rather exotic looking purple. Going to have a fun time trying to match that color in a few months

Anyhow, my job's been keeping me extremely busy so I haven't had much time to work on the armor. But I did finish one of the forearms: 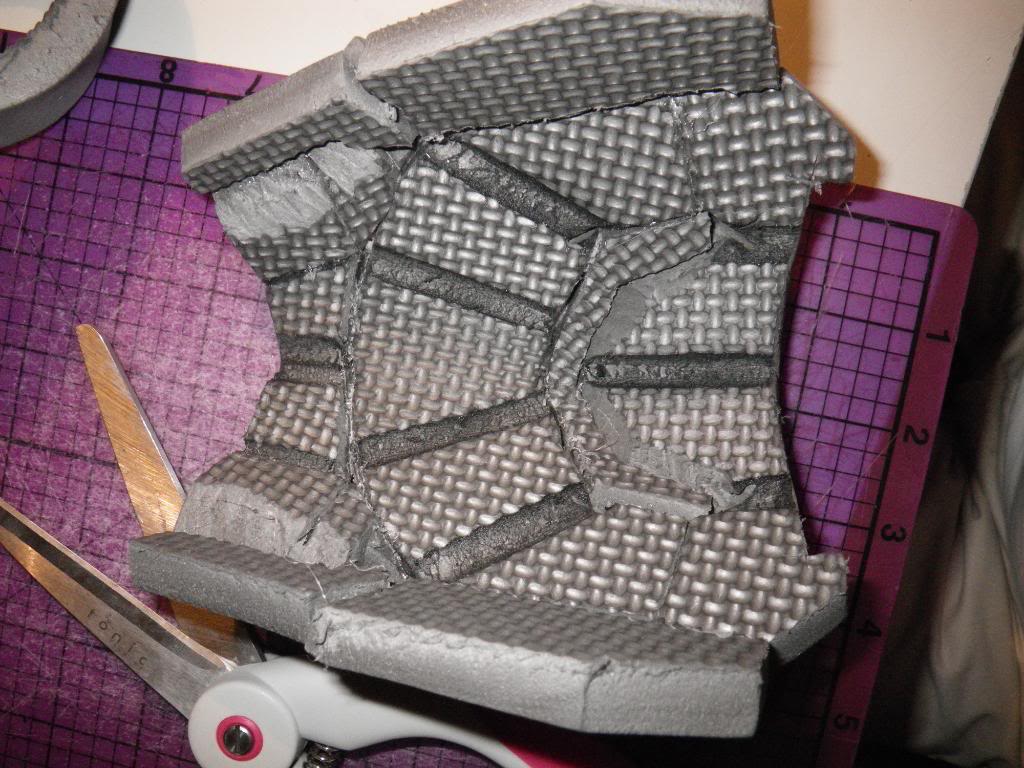 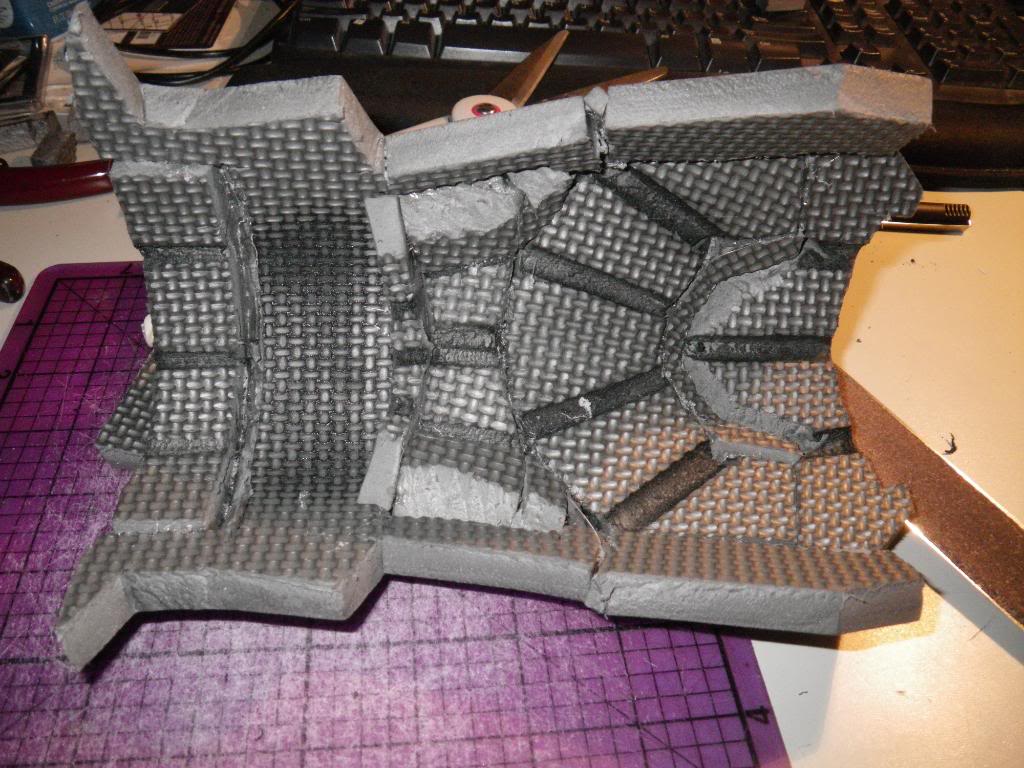 The burning of the grooves with the barrel of the hot knife makes it much easier to curve and combined with my new best friend the heat gun, really allows me to make nice curves I haven't been able to do before : 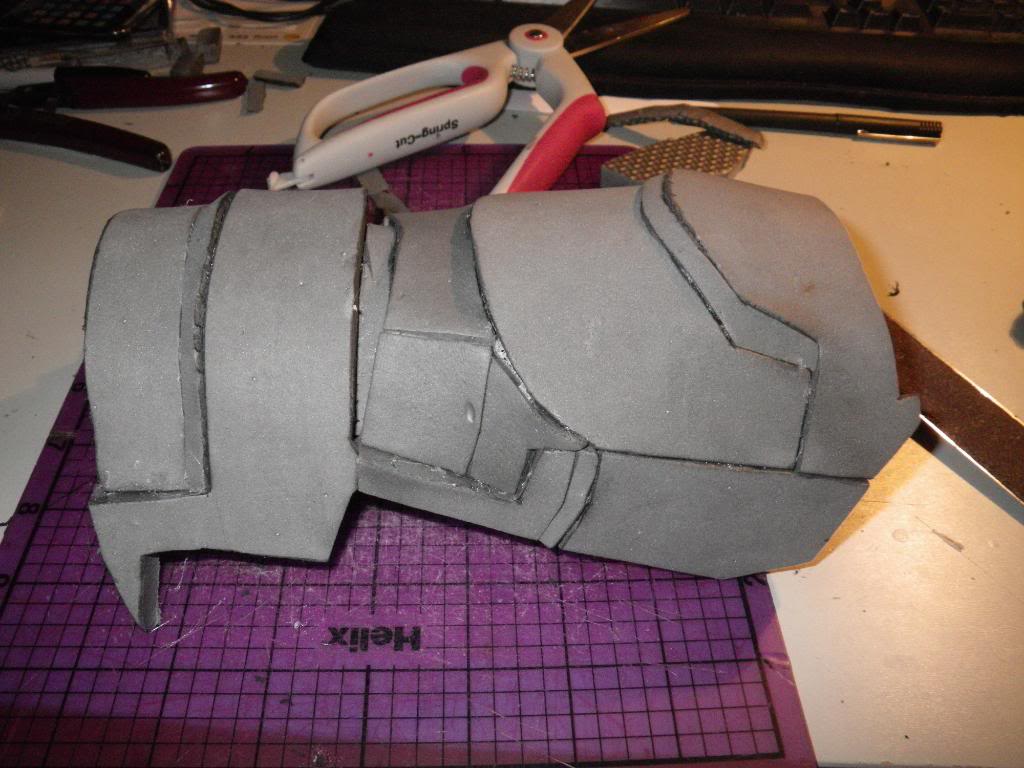 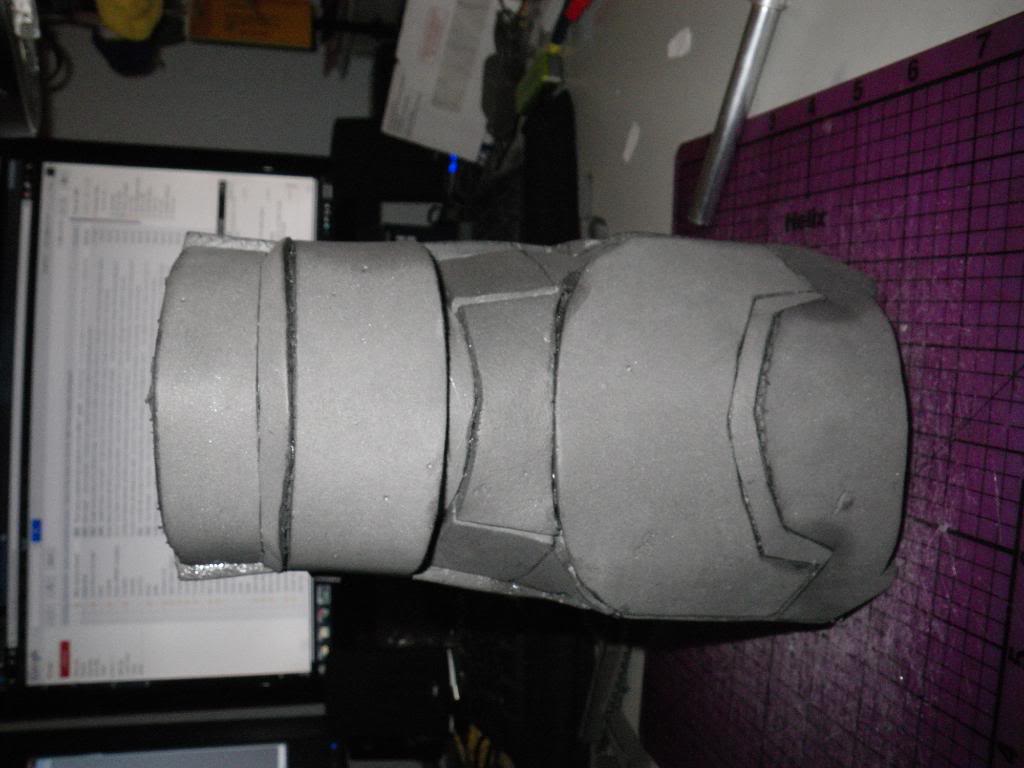 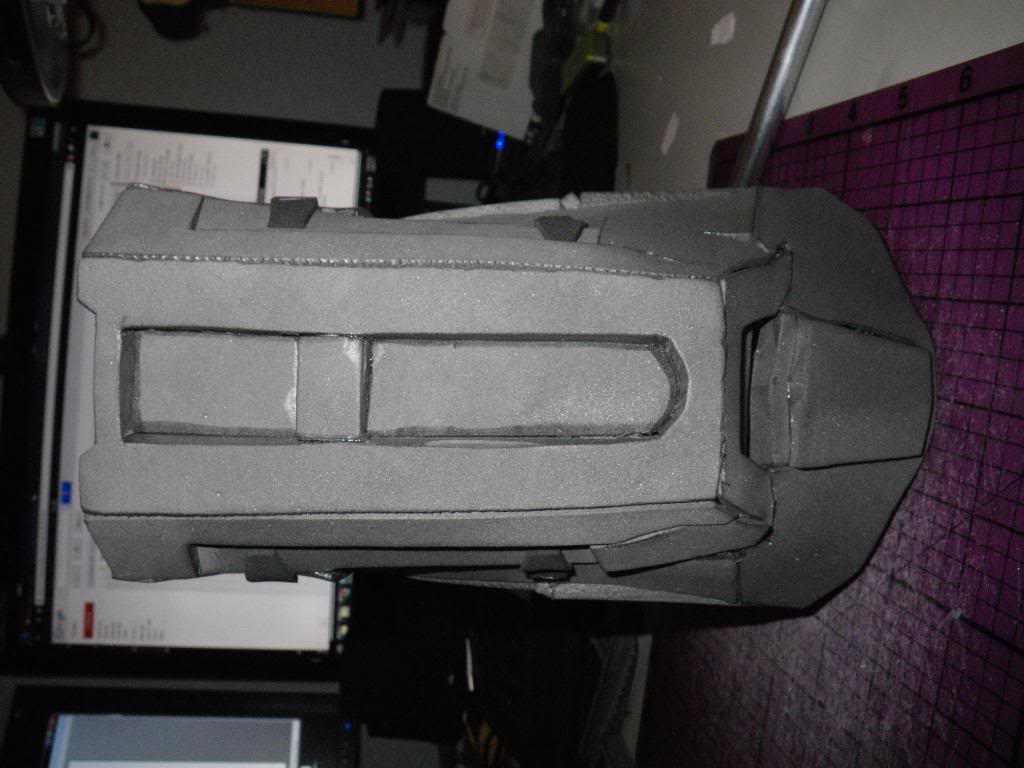 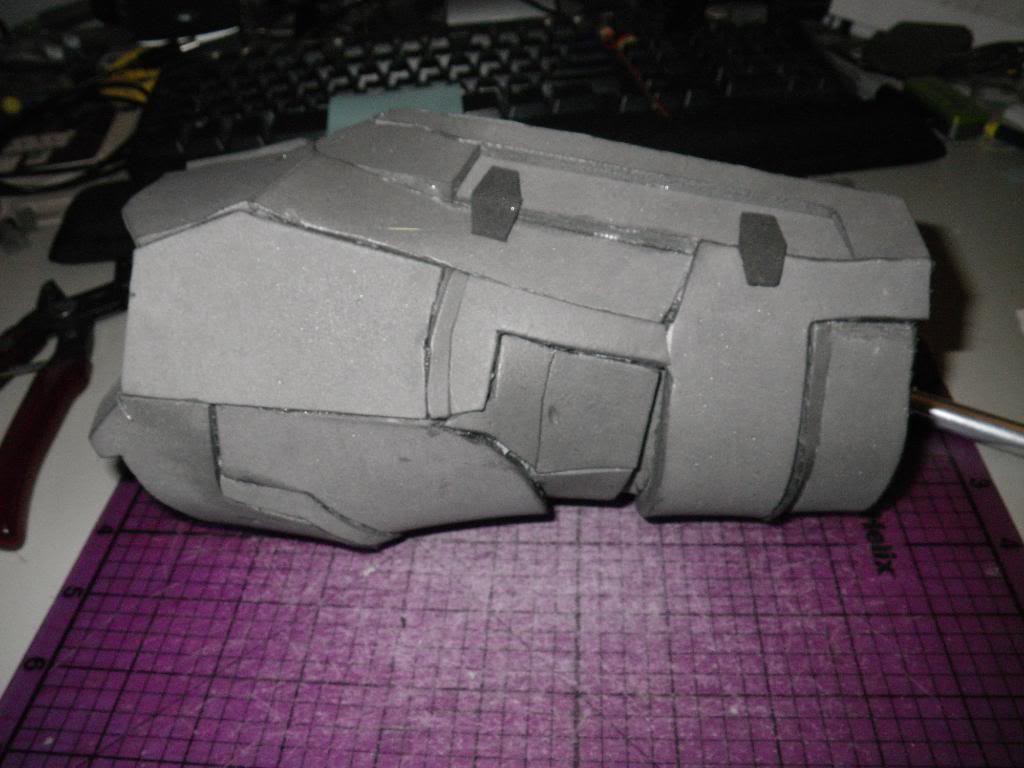 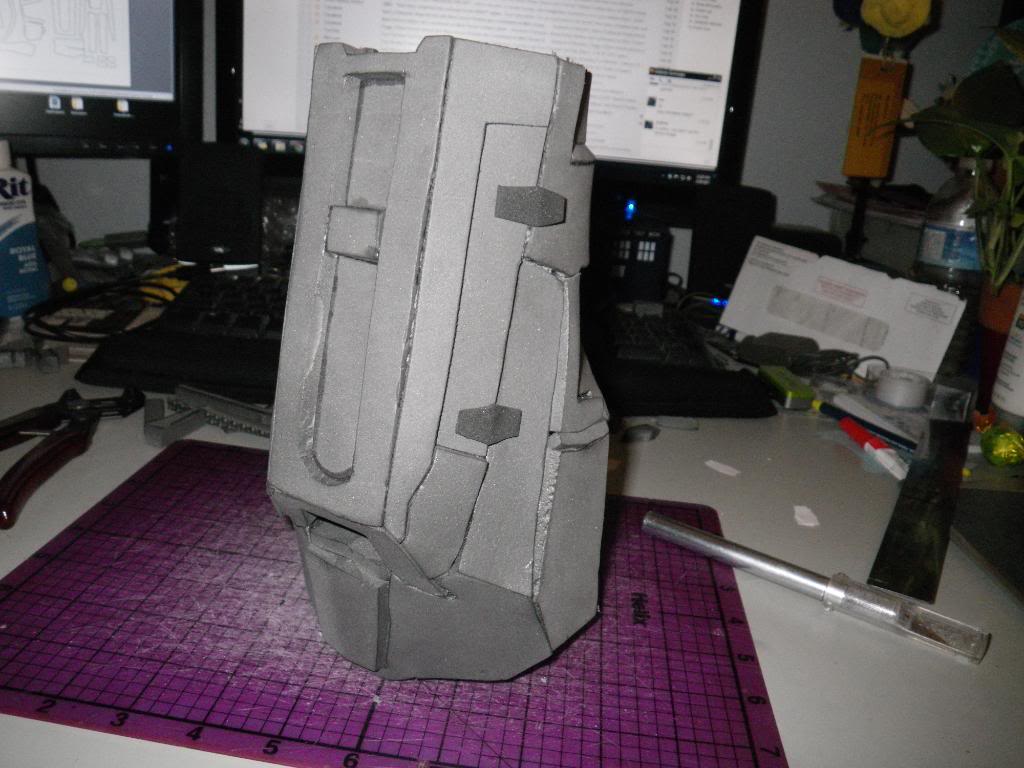 I never would have thought of burning the foam to curve it just right, and I see it's working,
R

Southwest Regiment
Nice forearm. I can't believe you got the EVA foam to behave so well. All those little details. I look forward to seeing your thigh pieces.
S

Quick update. I appear to have lost my camera. So it's camera phone pics from here on out. At least until I get a replacemnet.

Anyhow, here's some thighs! I'm not sure what to work on next, maybe the cod piece. 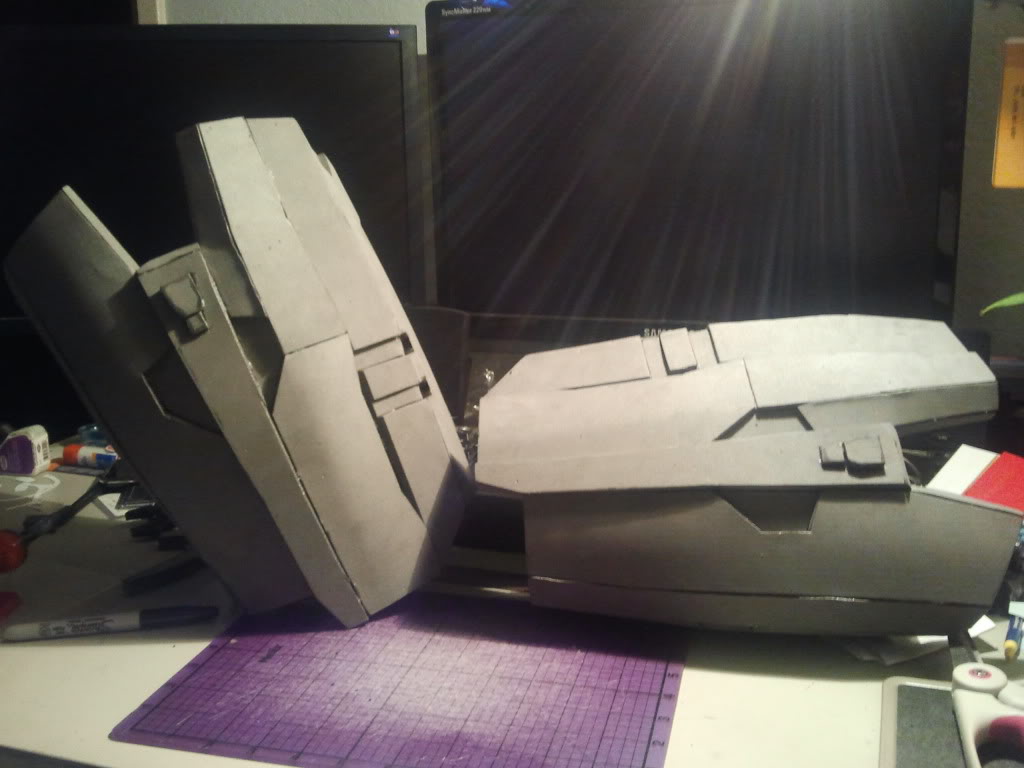 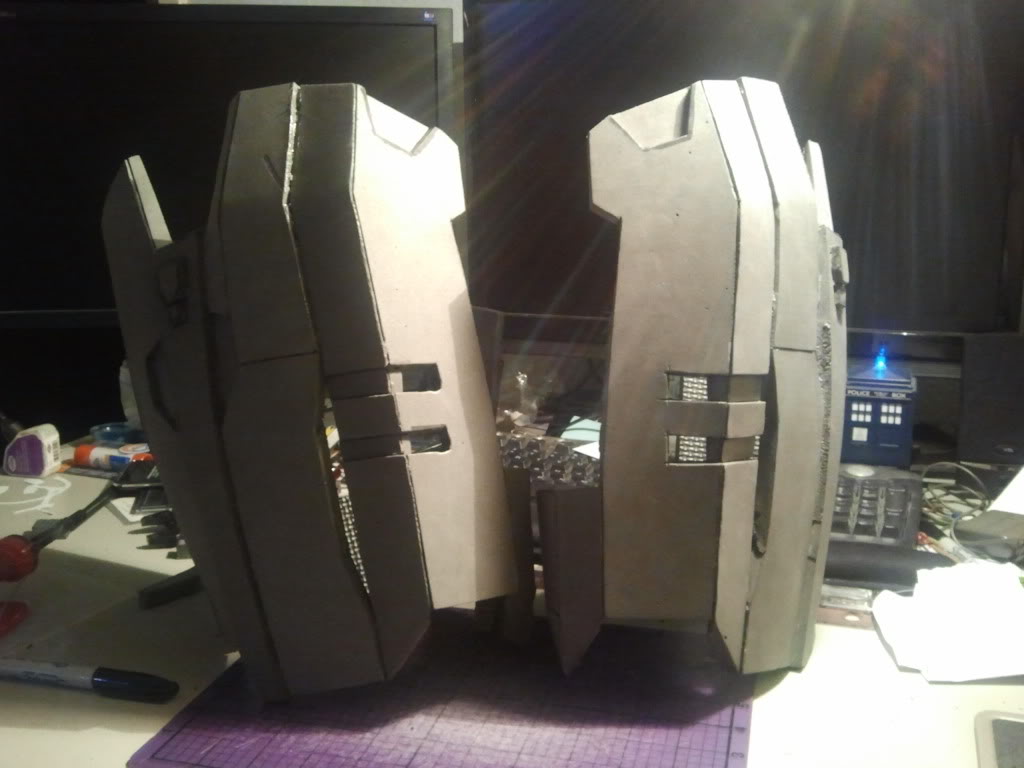 Wow, This looks really good Just got a couple quick questions for you-

How well does the foam hold up to you wearing it around all day? and
Are you planning on putting something in/ behind the foam to give it some more strength, if that's even a problem?
A

1) The foam is quite durable and I was able to wear my last costume for three days at comic-con and really had little problems with it. It's actually much lighter and more comfortable to wear than a suit made with resin and bondo

2) Strength isn't a problem with foam, but I will be sealing the seams with some drywall spackle and then putting a few thin coats of plastidip on it before painting.
X

Wow this build is going so well, I hope you're still doing it! I noticed you're in Irvine and I'm in Thousand Oaks! Maybe a Halo 4 midnight release meet up?

Midwest Regiment
Looking great. You to have this foam stuff down to a system, Love it.
S

The build is going a bit slow. My job has been keeping me intensely busy and I've had little time to work on it. On the bright side, I found my camera, so I'll probably put up some more progress pictures later.

In the meantime, I've built two more gauntlets, and currently working on a female cod piece. I'm thinking I'll make another set of thighs, as I keep looking at my old armor and when I compare it to my girlfriend's I'm getting more and more jealous that I'm giving her all the cool new stuff . Also getting closer with the helmets, hopefully just some spot putty and sanding and they'll be ready for painting. Aaaaand finally, I think my sword is ready for thermoforming. I still haven't worked out the mechanics of what I'm going to do. I was considering buying plexiglass and just bending it around the form with the heat gun, or just finding someone with a vacumform setup and going from there. I'll keep you guys posted whenever I get the chance to work on it and take some more pictures.