well, it's been awhile since I've posted anything on this site let alone started a thread. for the past month or so I've been planning a large scale Halo armor project, this isn't that. My friend being a costume loving geek like myself has decided to host a second Halloween party on February 24th. I received an invite a few days ago on the 26th. I admit, I panicked for at least half an hour thinking "What on earth will I wear!?" "What could I possibly build in a month?!" "what would look awesome?" I started thinking down the halo line of armor when I thought of my major project and quickly weeded out what I couldn't do. Halo ODST? no, would take too long with all the pieces. Halo 2 Anniversary ODST? no files available and no time to make them. I then remembered the classic halo 3 marine and how realistic, cool, and simple the armor was. after 30 seconds of thought I realized I could make it white to match the cold February weather and I was sold. I immediately downloaded pepakura models, put together an Amazon shopping cart, and downloaded a bunch of reference material. I'll be building the whole thing out of .25" craft foam so it'll be light, quick to build, and relatively cheap. over the weekend I ordered everything I needed off Amazon, got a heap of foam, ordered a kit for a 3D printed DMR, adjusted the pepakura models to fit, and planned out everything I need to do.

Here's my schedule so far. I expect it to change depending on what comes up and how smoothly things go.

The first thing on the schedule was an Item called "Skullcap" this is an insert I quickly designed to fit inside the Marine helmet so I have an open surface to mount the padding and the headset to. since they were created completely separately the skullcap is oversized and will be trimmed to fit the helmet once it's done. 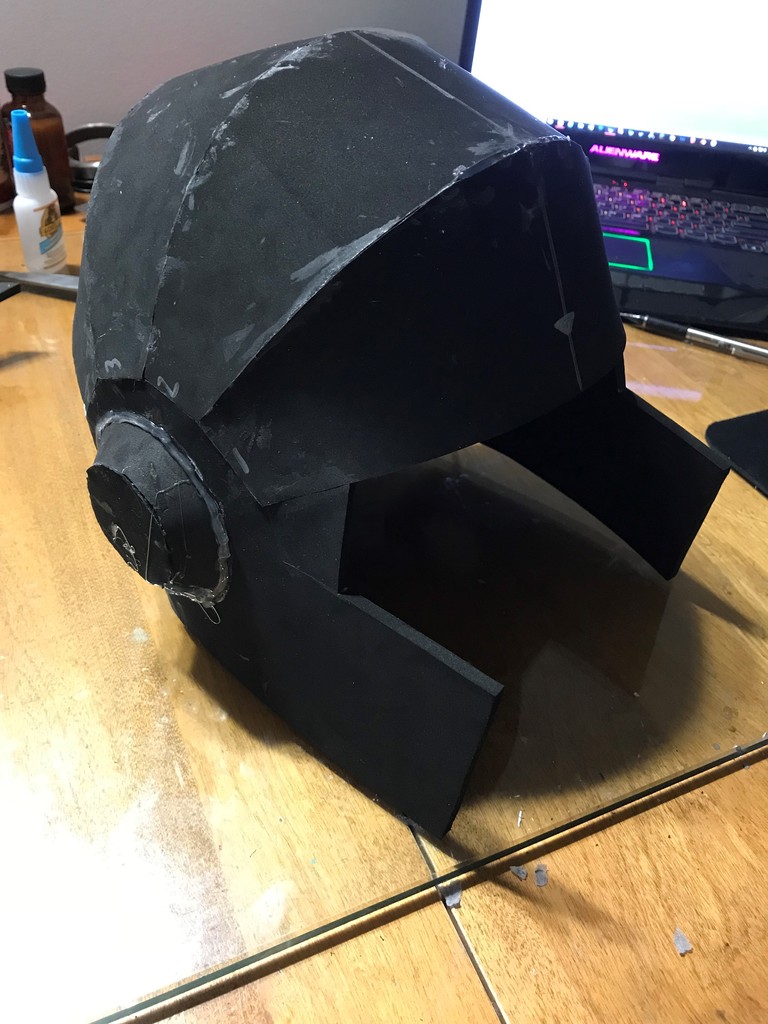 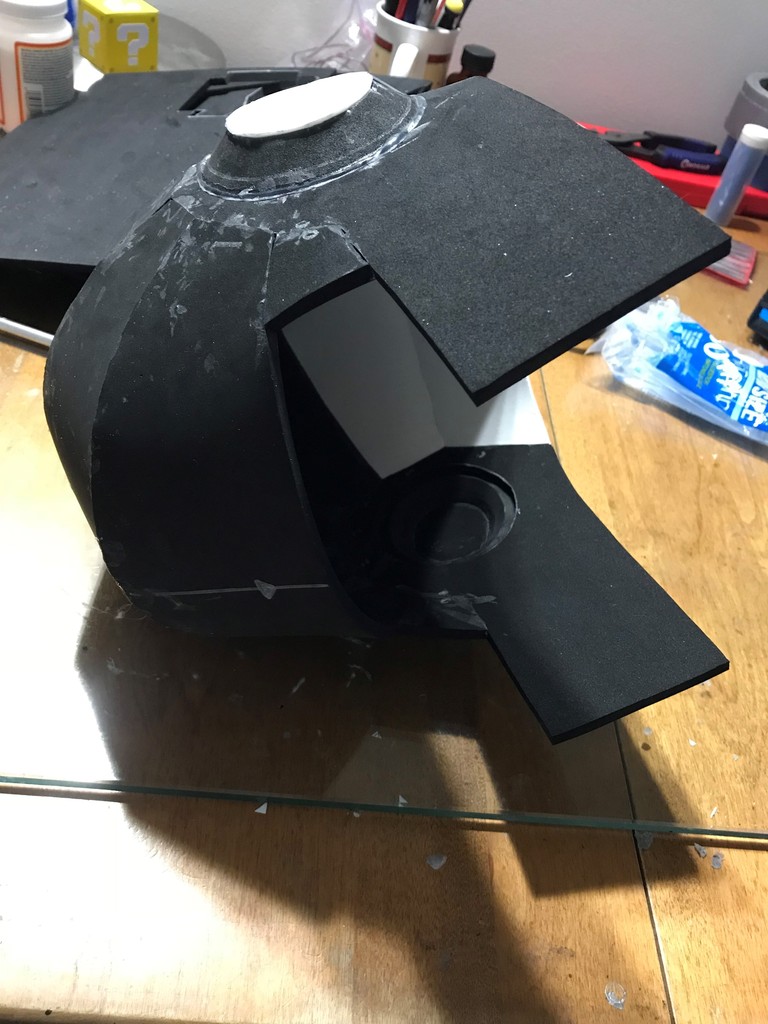 I'll be back once I have the rest of the helmet finished on Saturday morning.

You probably have a bit of leeway in the schedule with the smaller plates for the limbs which is really nice since you can use it to buffer for a full cure of the different paint types before masking which guarantees less peel up.

Just remember to take some breaks and not burn yourself out even though the deadline is there. Nothing takes the fun out of a project more than stress due to time crunch. I'm a hypocrite for this advice but learn from my mistakes and have fun with it!

Gooooooood mornin' 405th!
Oh, would you look at that. it's already four in the afternoon...all nighters will do that. thanks for the advice Turbo I don't plan breaks in my projects, but on occasions they pop up. I prefer to keep my nose to the grind stone early so that I can slack off toward the deadline. Time crunches seem to always be a trend for me anyway. one week until surgery, two weeks to Awesomecon, three days to Halloween, and so on. maybe I just do my best work under a time crunch. I promised myself I wouldn't go to bed until I had finished the helmet and I did just that. 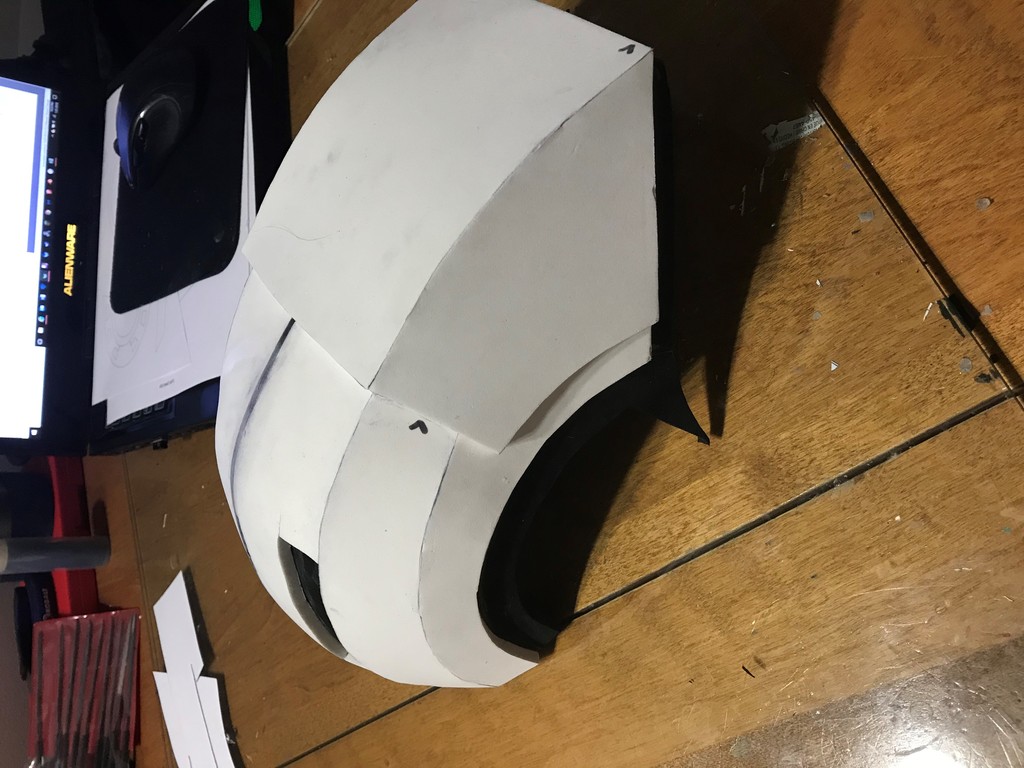 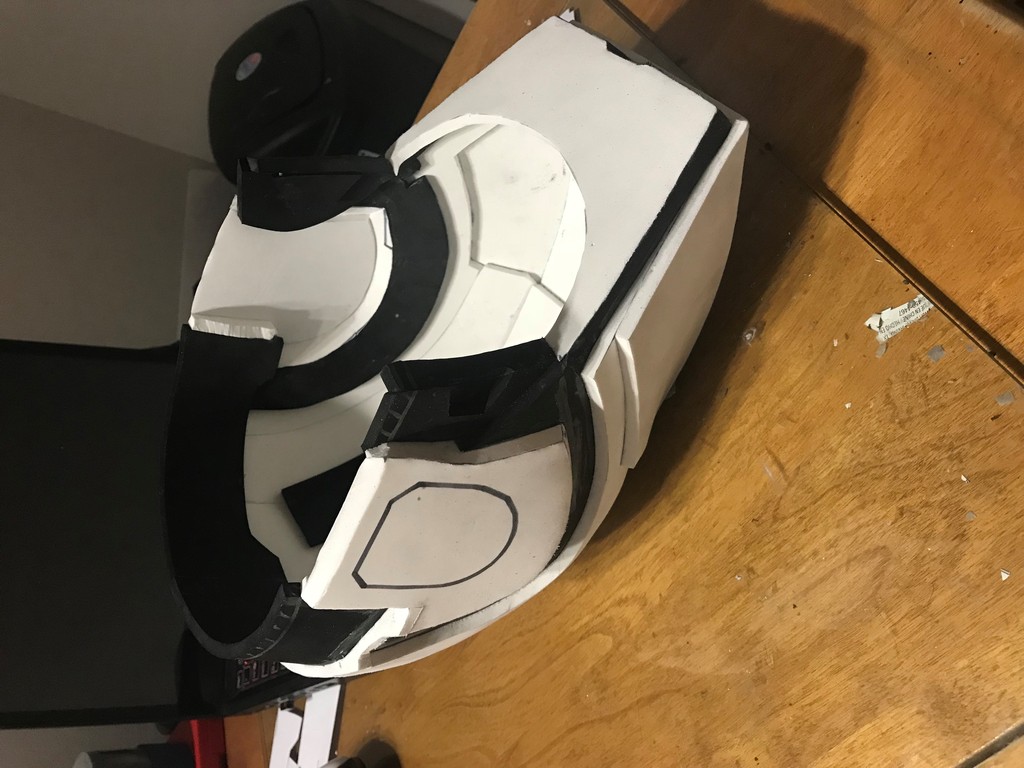 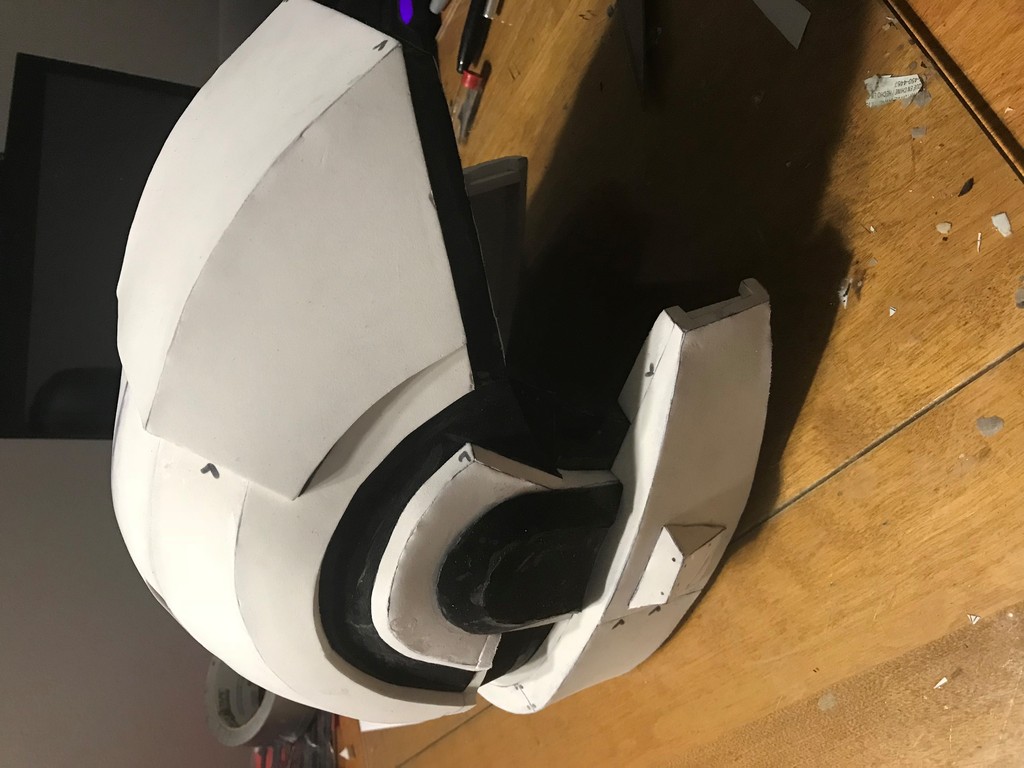 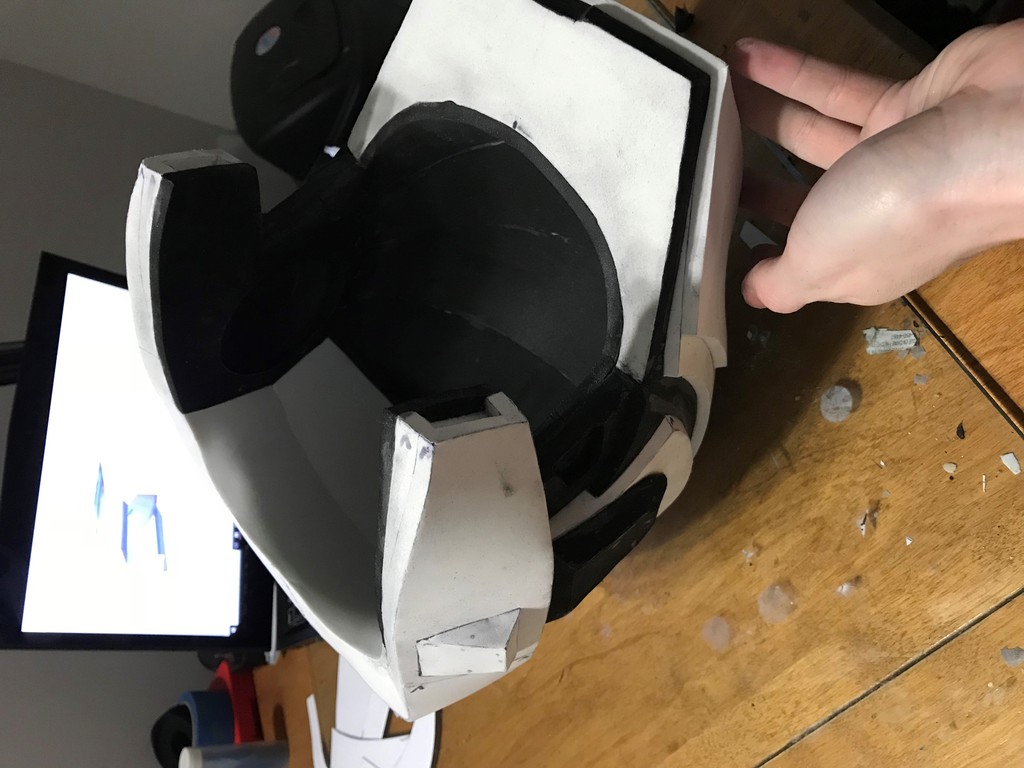 I've never built a foam helmet with an interior before. I think it turned out well. 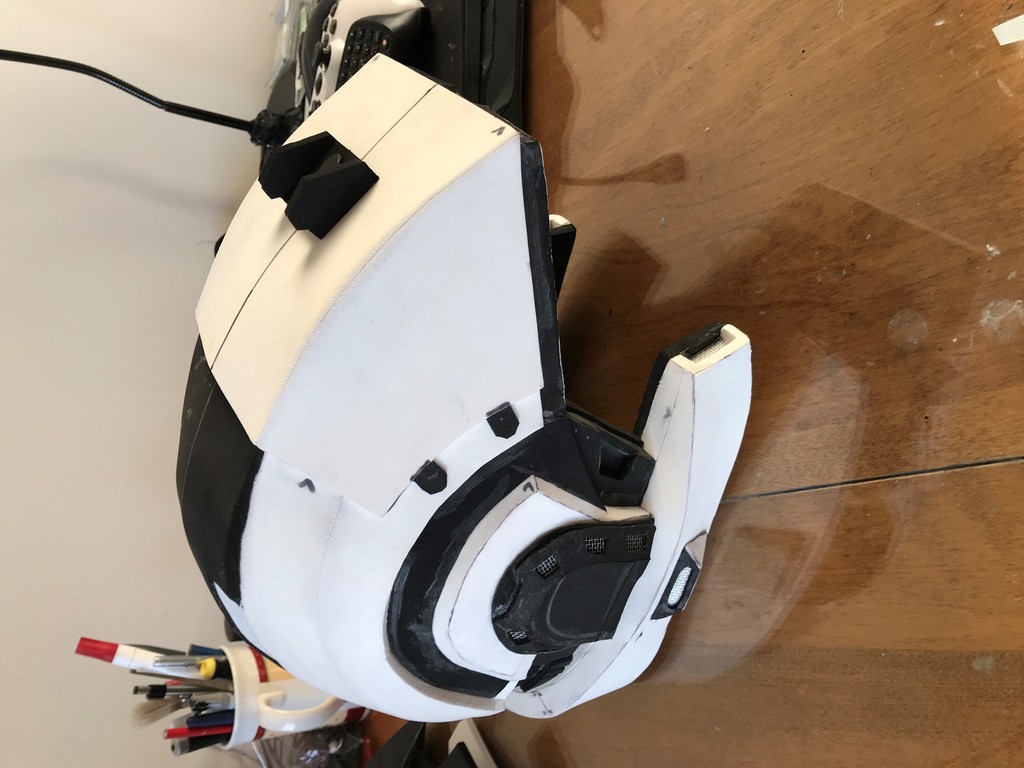 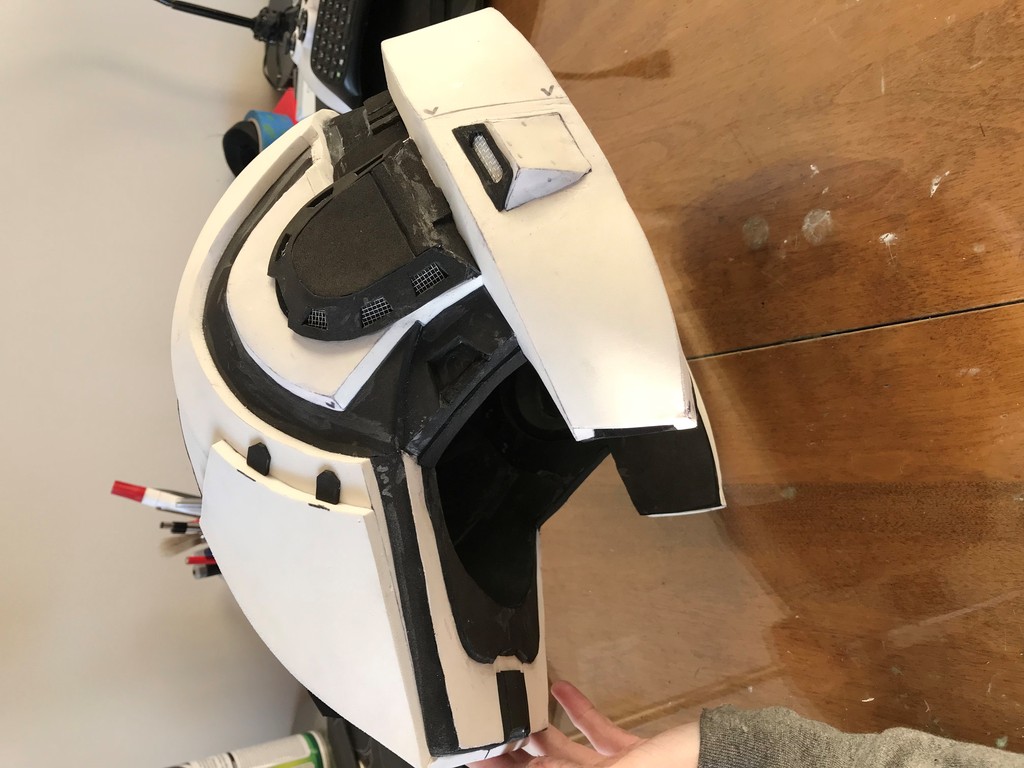 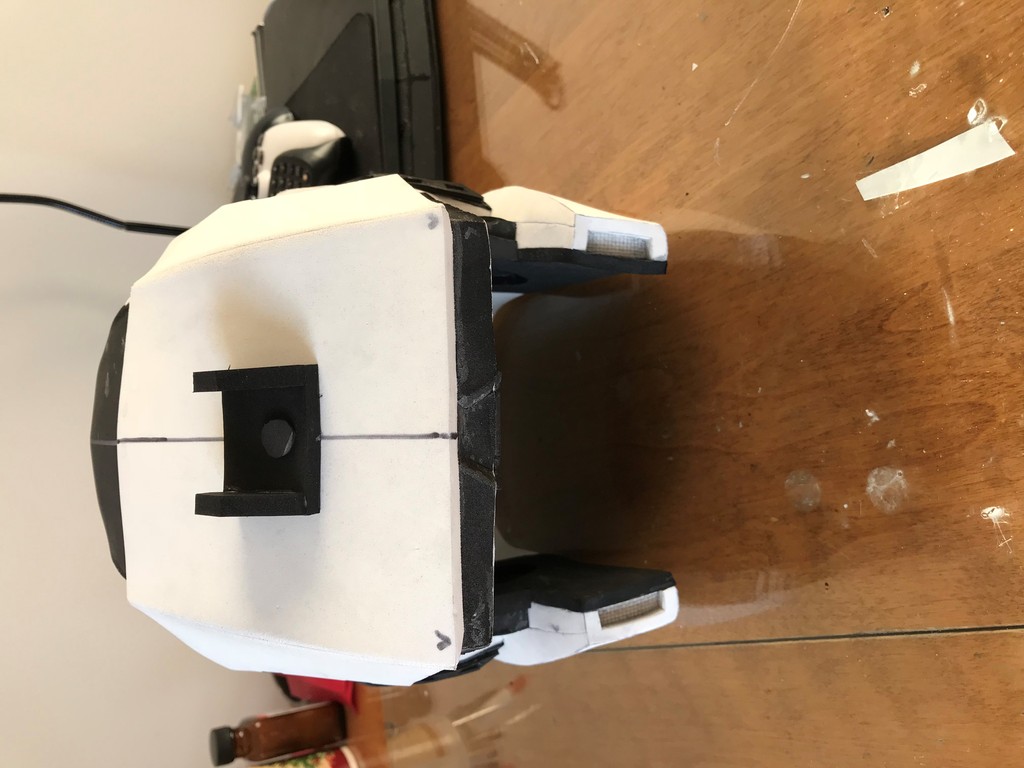 I need to find a better place to post pictures than Photobucket. It's total rubbish. It runs slow as a snail, bombards me with ads despite my blockers, crashed my laptop several times, and even installed weird programs on my desktop. And it won't rotate my pictures. so frustrating. . I had a Bluetooth headset and a visor arrive in the mail that I'll install once everything is painted. I've just printed templates for the chest armor and hopefully I'll have it done before Monday.

I was originally thinking about doing a white marine to match the cold weather, but it had never occurred to me that I could wear to conventions. I think that olive drab green would be more recognizable in that case. now I'm on the fence, what do you all think?

-Friday was sushi night. I did not have sushi and I want to eat sea critters.

405th Regiment Officer
Colonial Regiment
Community Staff
The only problem I see w/ the HALO marine helmet.....it's so close to the Starship Troopers helmet. Other than that....go w/ the olive drab green. I don't recall marines in a snow environment. I could be wrong.....I just don't recall anything. Regardless.....helmet looks great. Awesome job.

Dirtdives said:
The only problem I see w/ the HALO marine helmet.....it's so close to the Starship Troopers helmet. Other than that....go w/ the olive drab green. I don't recall marines in a snow environment. I could be wrong.....I just don't recall anything. Regardless.....helmet looks great. Awesome job.
Click to expand...

Aren't the Starship Troopers helmets rounded and the Halo Marines ones angled on certain faces?

Marines show up in Assault on the Control Room which is snowy but they were still in their shipboard grays because CE.

There was also the mission in Halo 3 when things get a bit snowy, but there isn't any armor change. It doesn't matter to me if the armor color I go with wasn't in the game. I doubt I'll ever wear this outfit again after this party, I don't enjoy going to conventions anyway. Maybe I'll sell it. Thanks for the comments Gentlemen, I was fearful I'd have to double post.

I'm Finally finished building all the components a few days behind schedule. tomorrow I'll Plasti-Dip everything. 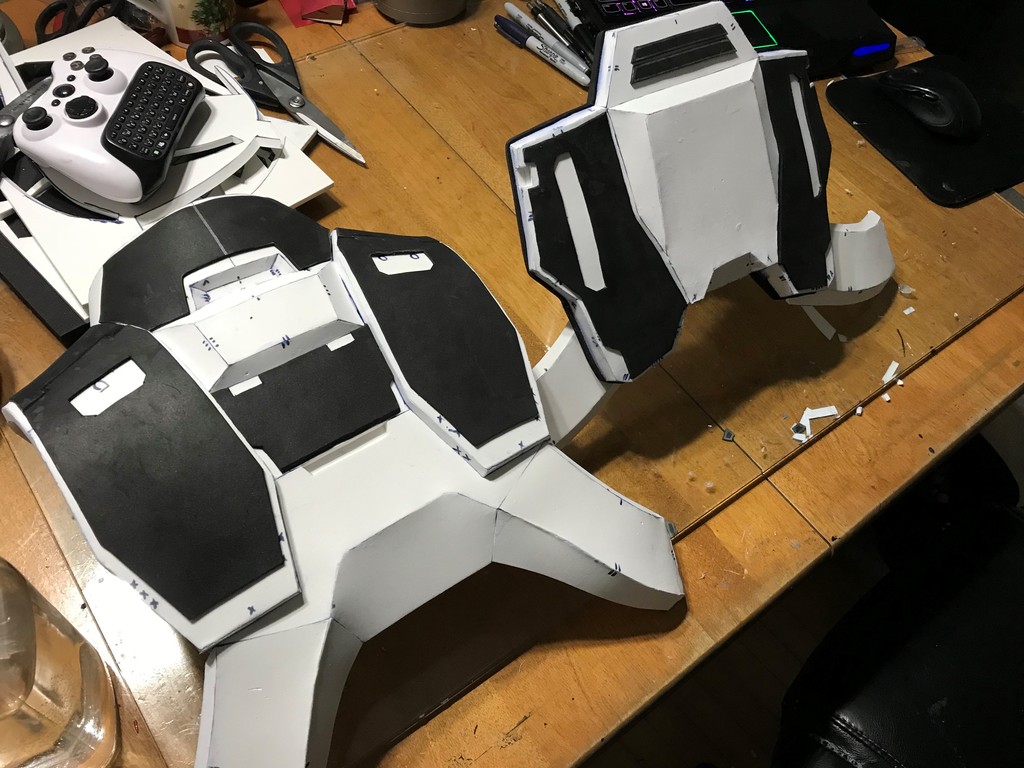 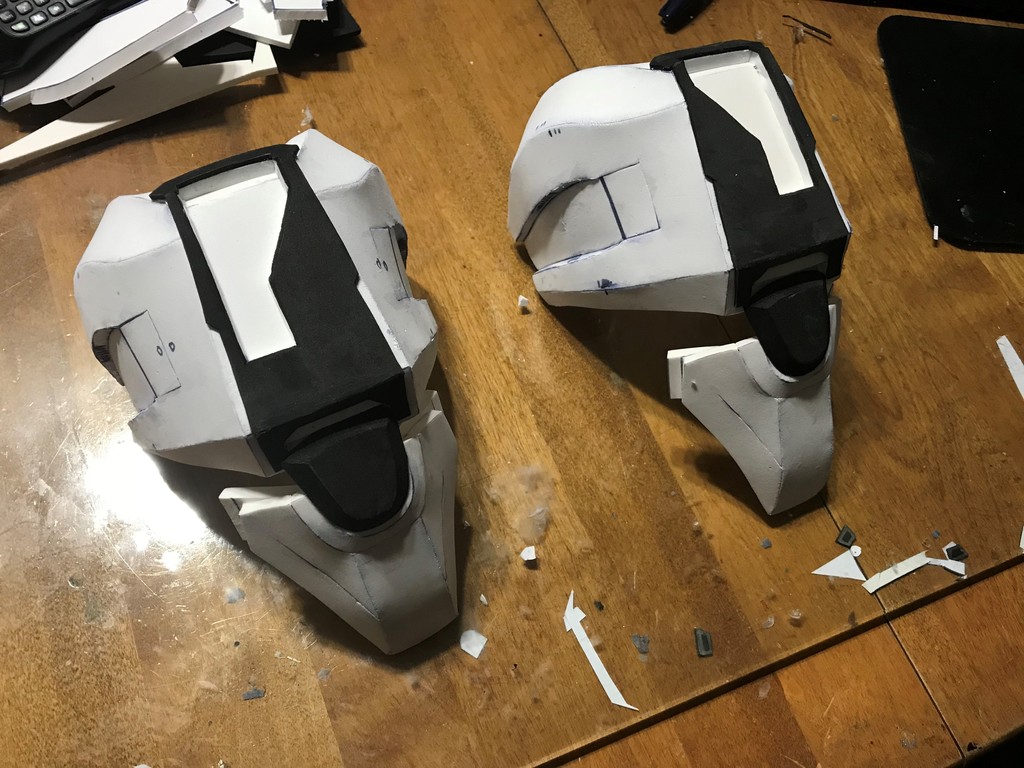 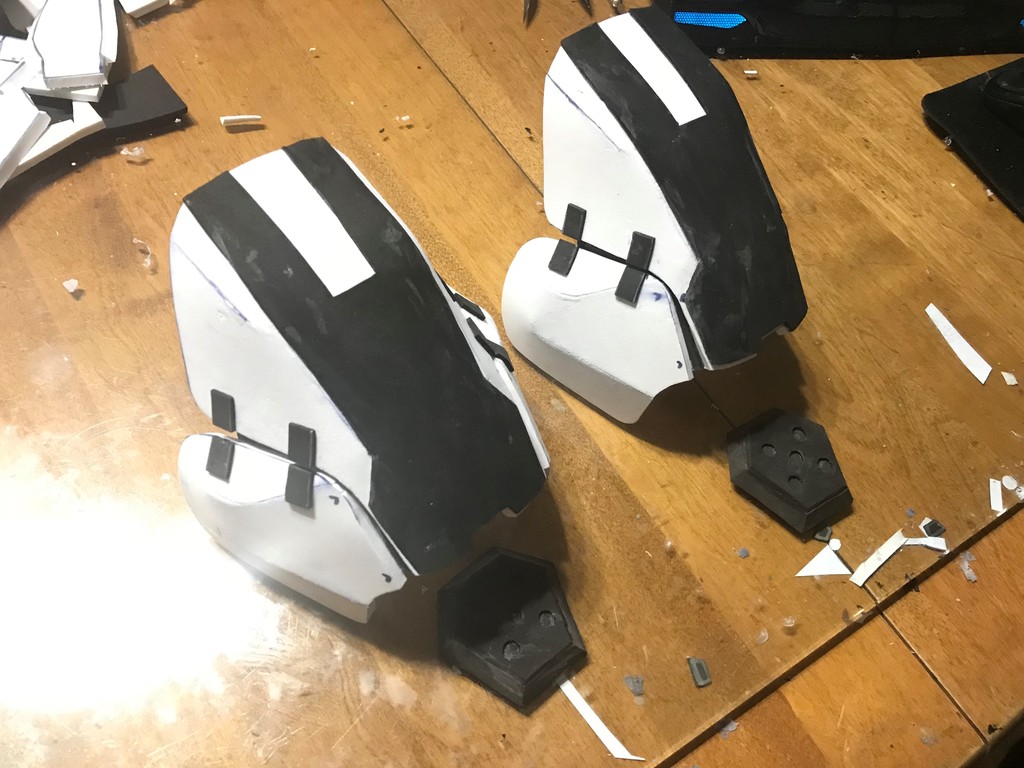 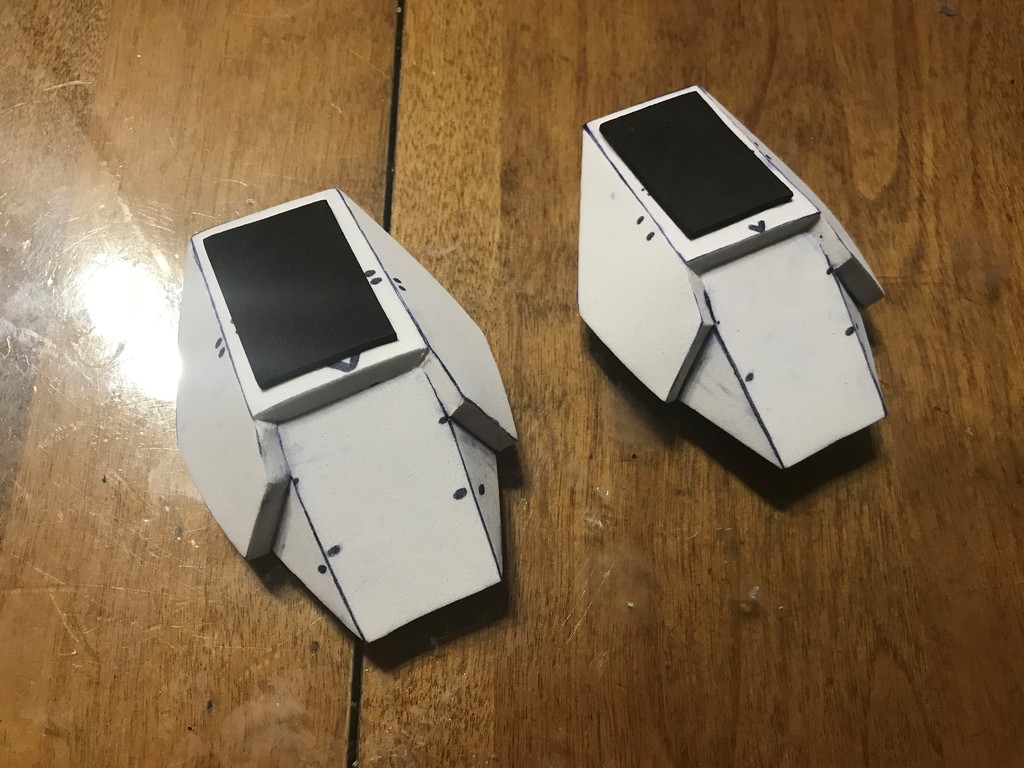 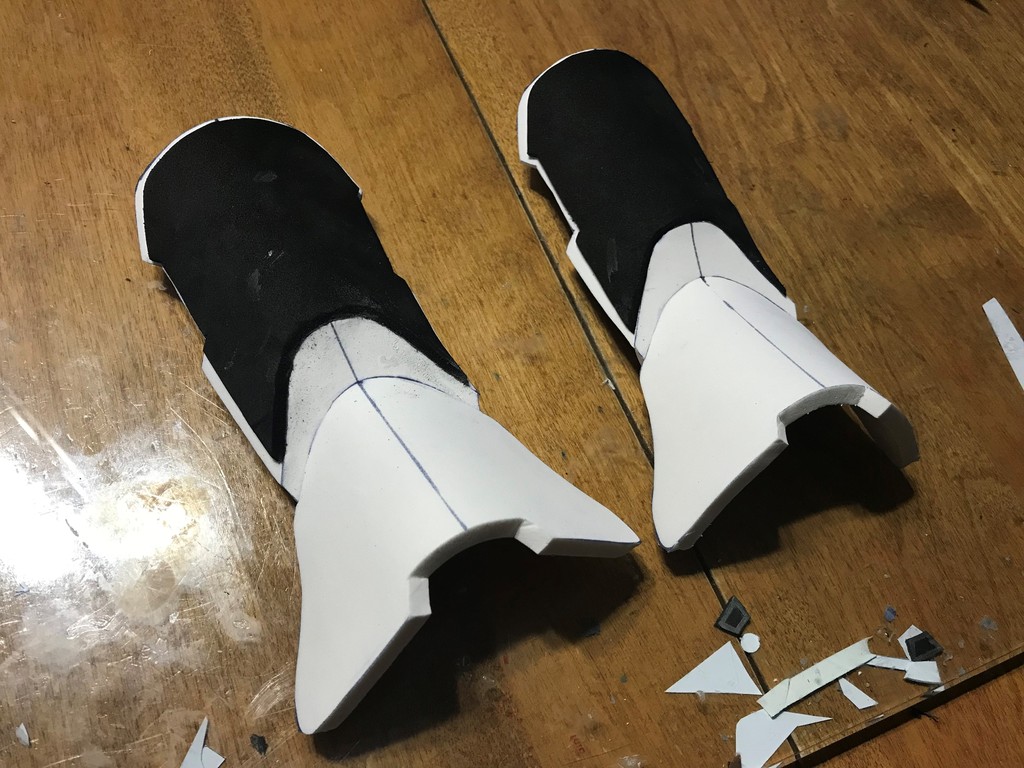 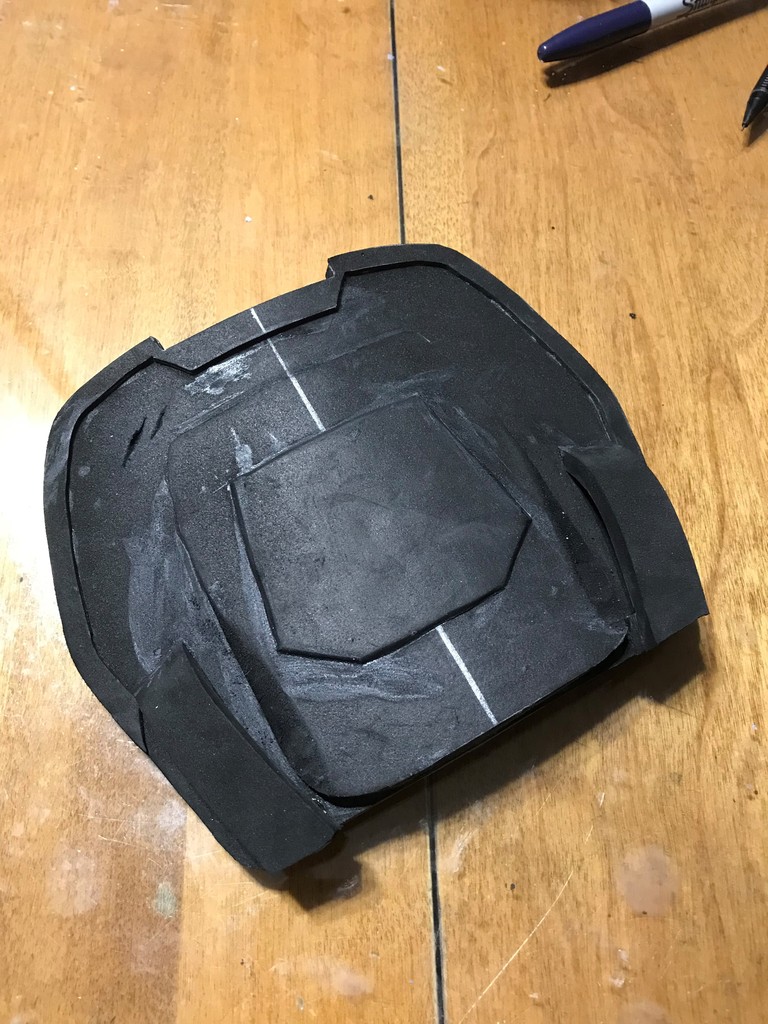 -I can't use the fingerprint scanner on my phone because my fingers are caked in crazy glue, I can't seem to scrape it all off.
Last edited: Feb 9, 2018

My apologies, I didn’t mean it like that. I intended my comments to be in jest. Let me fix this. Sorry. 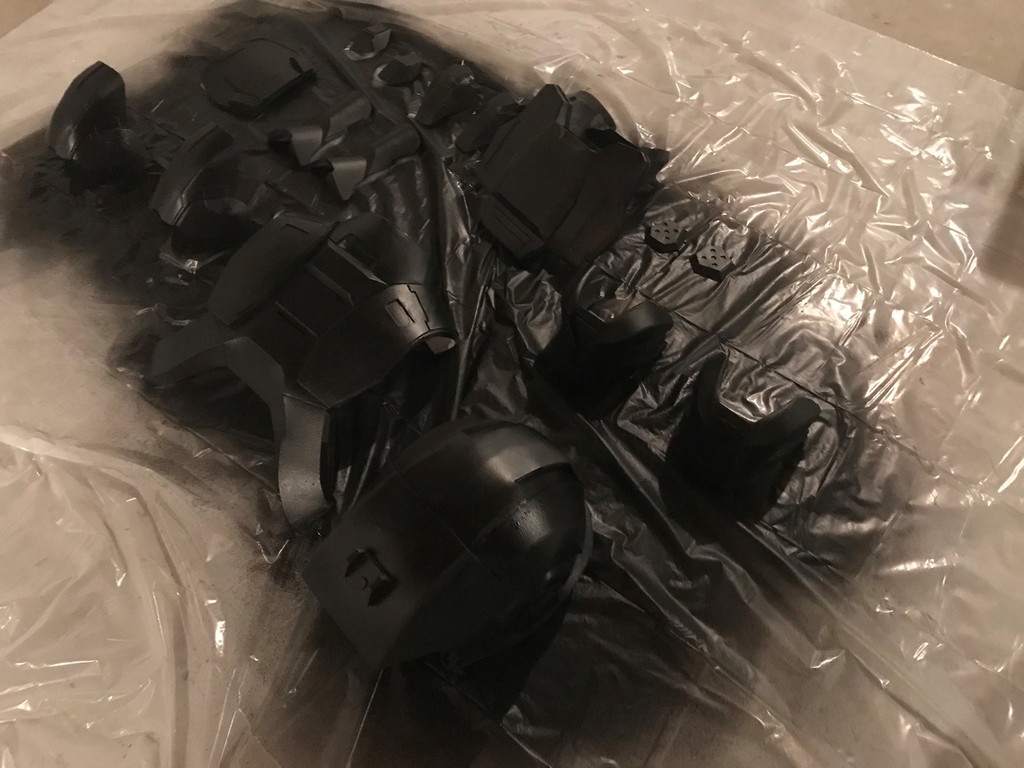 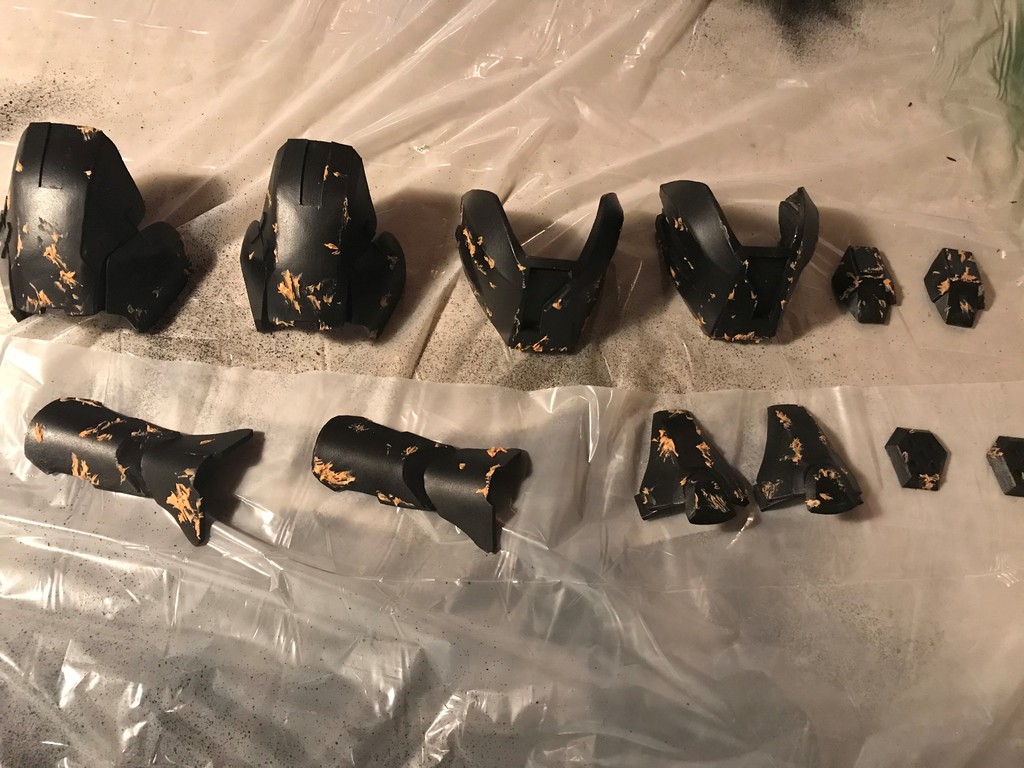 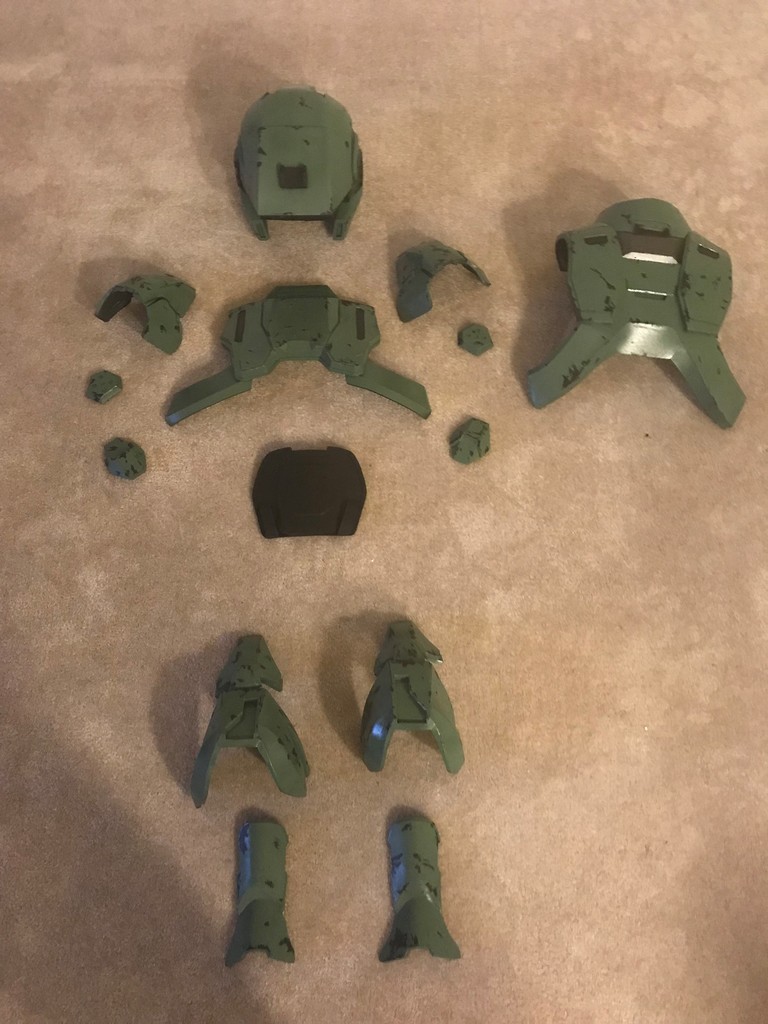 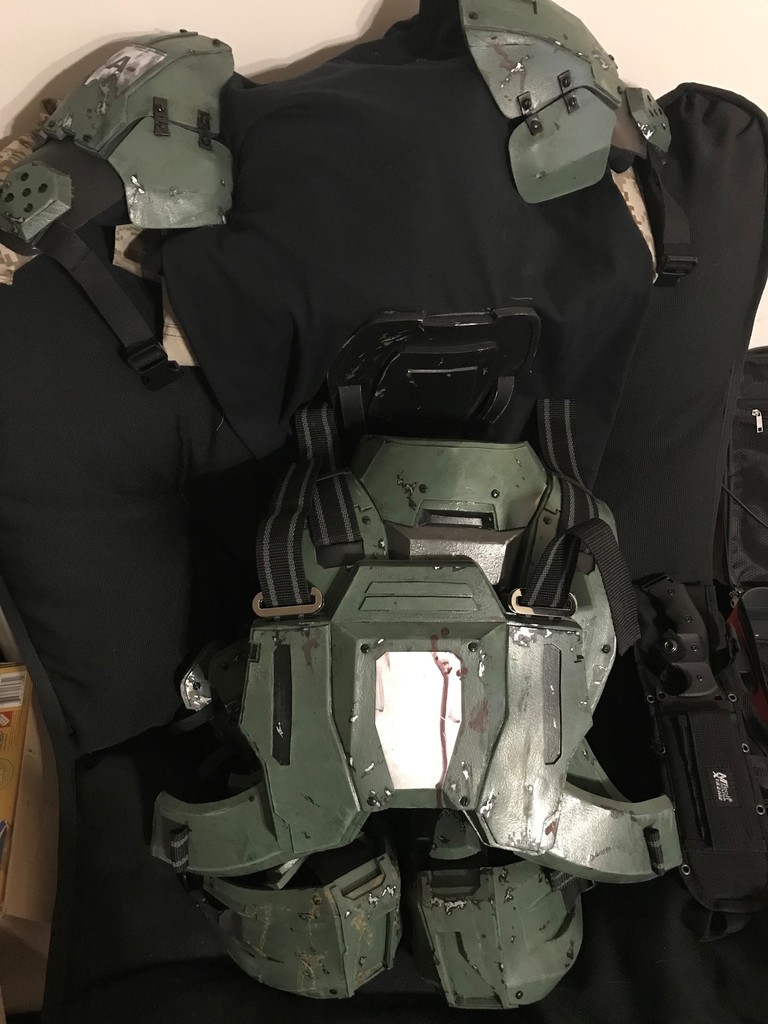 Colonial Regiment
This turned out awesome great job! Hit it marine the corps not paying us by the hour! 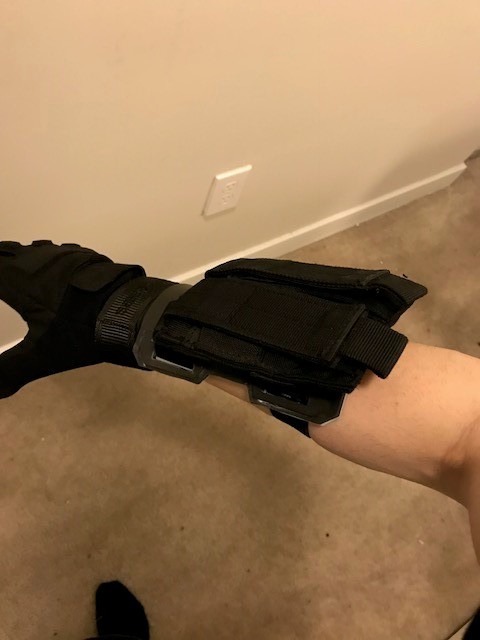 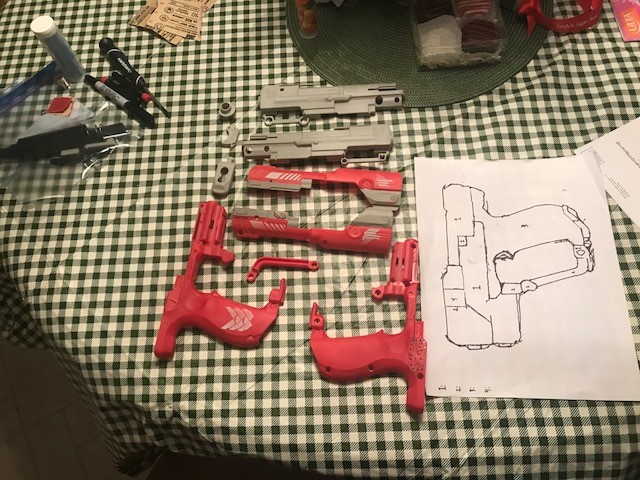 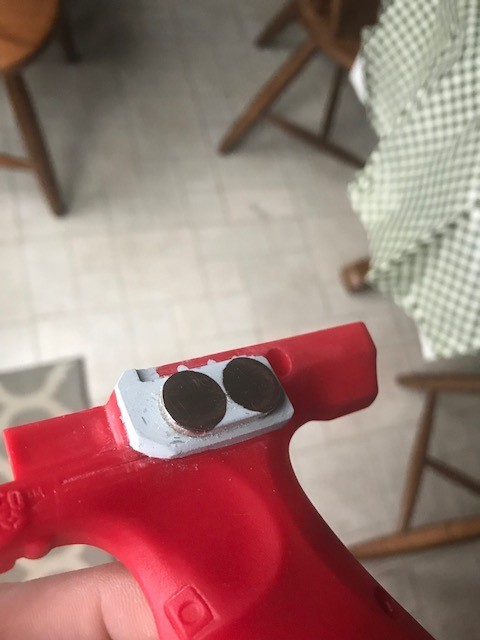 I affixed magnets to the pistol 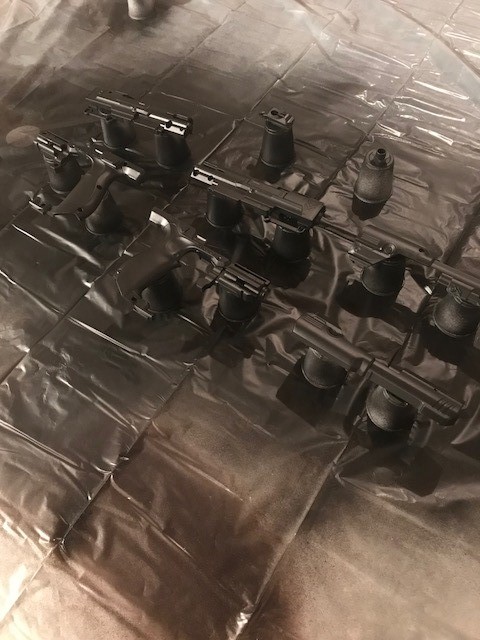 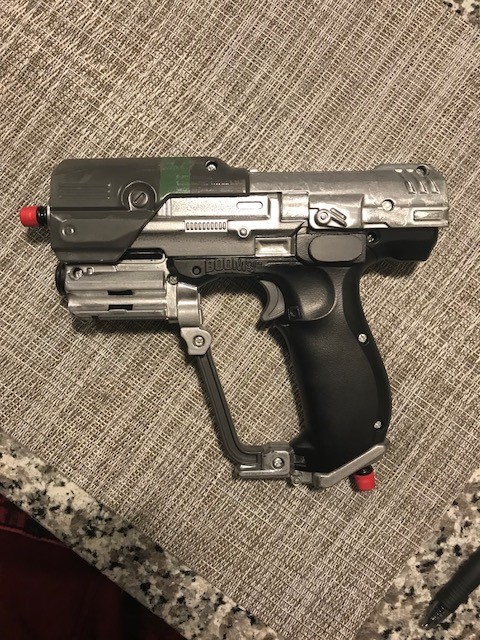 less than Ideal, but it'll have to do. I already ordered another pistol to I can make a better one soon. 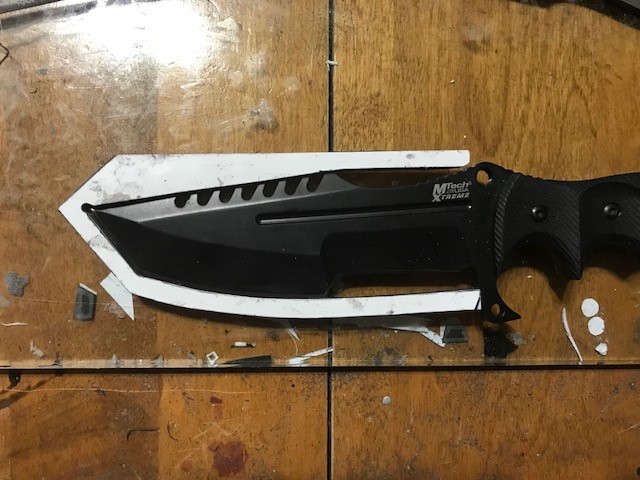 I remembered I had a Halo 4 style knife, but the sheath it came with was rubbish so I decided to make a new one 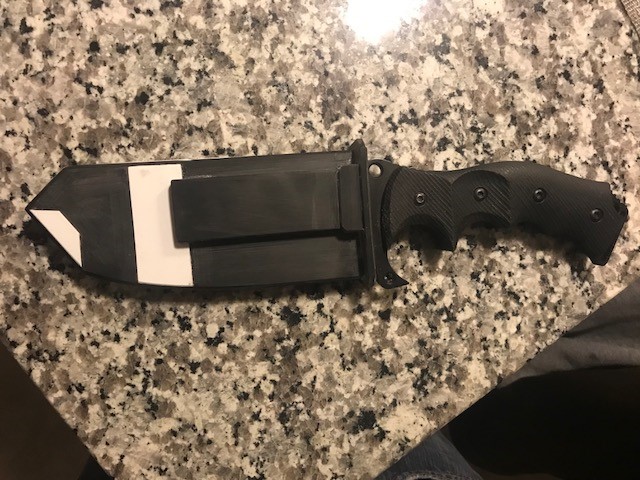 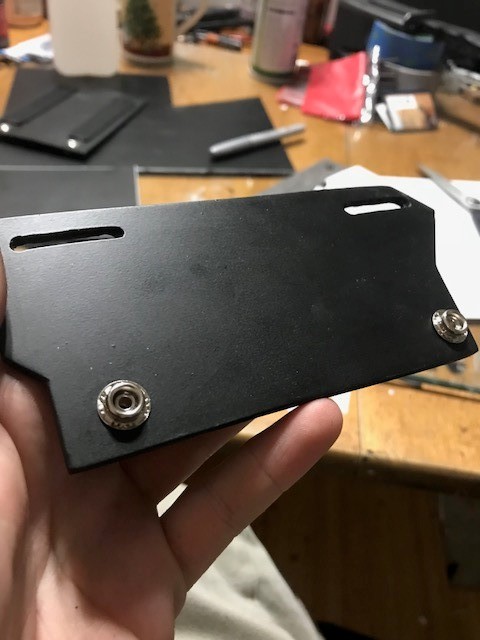 I've never used snaps on solid parts before and They turned out rather well. 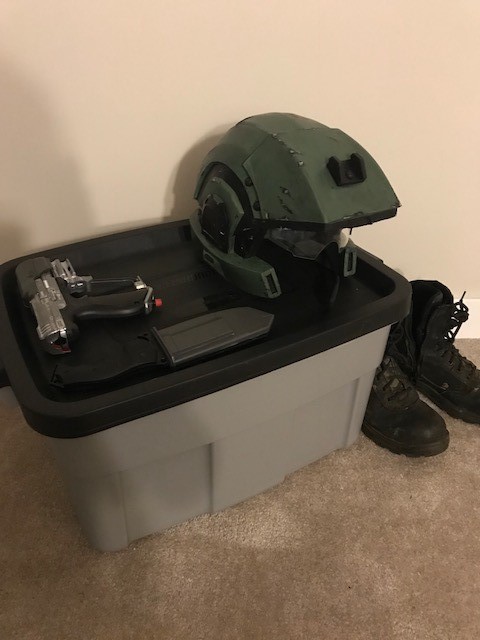 packed and ready to go to the party. I let my anxiety fueled thought processes run rampant to the point where I now dread going, but if I don't then the whole costume will have been a waste of time. we'll see how this goes. I'll post pictures of the completed costume on the 25th.

Holy moly. This is some of the cleanest foamwork I think I've seen on this site. You're doing phenomenal with this build.

405th Regiment Officer
Colonial Regiment
Community Staff
Forget the suit........what the hell are you still doing w/ an N64? Are you stuck in the 90s?

Pacific Regiment
405th Regiment Officer
Washington
Community Staff
Not a good idea to take a real knife to a convention, but other than that the suit is looking great!

If you still haven't found alternative for photobucket, I would suggest just using this site. (not the media albums, that's better for finished pics like from cons)

Next time you make a post, next to the "post reply" button it says "upload a file." Click that, find your pictures. Put your courser where you want the photo and then click "thumbnail" or "full size"

Classic games systems are so classy these days, my friend. If you've got the system, working controllers, and a few games, you're in for some fun nights with buds playing Mario Party.

mblackwell1002 said:
Classic games systems are so classy these days, my friend. If you've got the system, working controllers, and a few games, you're in for some fun nights with buds playing Mario Party.

Pacific Regiment
405th Regiment Officer
Washington
Community Staff
You guys are crazy... it's all about that Smash, bro.

PerniciousDuke said:
You guys are crazy... it's all about that Smash, bro.
Click to expand...

FROM DOWNTOWN! HE'S ON FIRE!

Division Staff
Midwest Regiment
405th Regiment Officer
It really is a shame if you actually don't plan on wearing this gear again after your friend's Costume Party, because you have some great foam work there. I really like your idea for the inner "Skull" cap inside the helmet. I had a resin cast Halo 3 marine helmet years ago that I ended up trading to a friend, but I remember thinking how awkward it was going to be to pad it for wear with how big it was inside.

I know you said you don't enjoy going to conventions, but a lot of our Regiments here do other events besides conventions, even besides Game Releases.