Two hundred and fifty years ago New Mombasa—at that time the world's busiest sea port—was chosen to be Earth's first tether city. Over the next eleven years the city experienced explosive growth, but nothing compared to what followed. The city grew out as well as up, its urban sprawl unequaled throughout the continent. By 2430 New Mombasa had absorbed all of the island and many of the surrounding towns found themselves overrun by residents of the old city. The switch was never official and many of the neighborhoods within direct line of sight to the Mombasa Tether still distribute newspapers and chatter directories under their "old" names, but all municipalities within a 74 km radius of the island are now referred to as Old Mombasa. 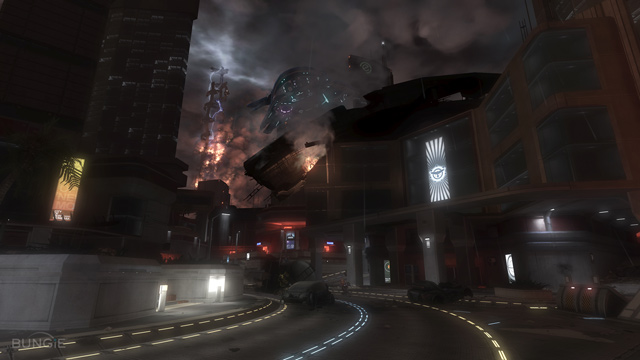 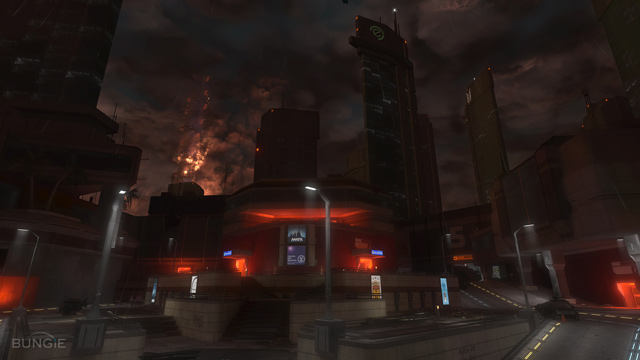 ODSTs are recruited from the Special Operations Groups of all the nations of the Unified Earth Government (UEG). Since the first group of “handpicked volunteers” was activated, ODSTs have been dropping “feet first” into combat.

ATTENTION ALL UNSC PERSONNEL: Due to the ongoing evacuation efforts all health care personnel have been relocated to the Mombasa Quays area until which time they can be disembarked on outbound sea craft. In the unlikely event that you become separated from your unit or cannot contact a medic look for one of the many Optican™ MediGel™ First Aid stations around the city. 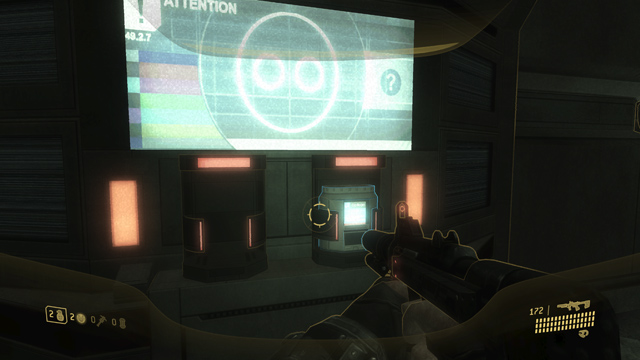 Each of Earth's six tether cities is managed with the aid of an AI. The Superintendent is a 2nd Generation "dumb" AI tasked with making sure that the city of New Mombasa's infrastructure (read: the Departments of Health and Human Services, Housing, Public Safety, Recreation, Streets and Sanitation, and Utilities and Transportation) is running smoothly and safely.

Description: The Type-25 DER is a battery-powered directed energy weapon capable of fully automatic fire. The exact mechanism by which it functions is currently under investigation.

Observations: Up until just recently the Plasma Rifle had been the primary weapon of the Covenant’s officer core. The weapon has a power output of 100~150 Kv@2~3 dA.

It has been widely noted that the disparity in the effective combat range between Covenant short and long arms are much greater than those of the UNSC—this is also reflected in the Covenant’s combat doctrine: destroy enemy morale with harassing fire from distant or hidden snipers and intimate exposure to the alien-ness of their infantry.

In addition to the standard issue "blue-purple" DER there is also a "red" variant that has a much higher rate of fire, and thus a greater likelihood of overheating. So far this variant has only been found in the hands of the brutes, and even then, only since they have seen a return as front-line combatants.

Many technologies initially developed for the MJOLNIR project have gained widespread adoption; the use of ceramic-titanium composites for body armor and helmet-integrated neural interfaces being the most visible. The ODST helmet is issued with the VISR proprietary data management suite. VISR enables a user to link into UEG, CAA, and UNSC infrastructure systems at the local, national, and global levels (actual access level is administered on a need/rating basis). This allows the user to store and review audio files (up to 610MB combined), street level navigational data, and receive secure real-time mission data. In addition, every current issue helmet is equipped with low-light vision enhancement [ODST BIOS A29.817941B.01 or later]. 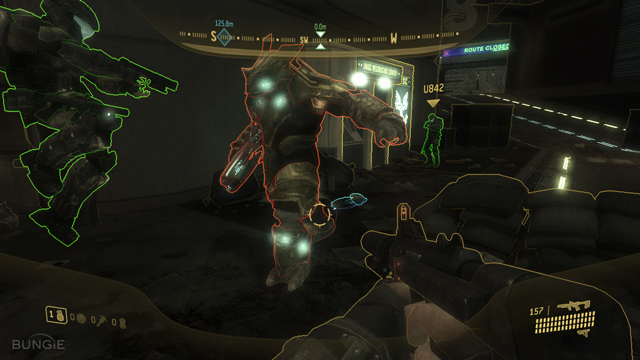 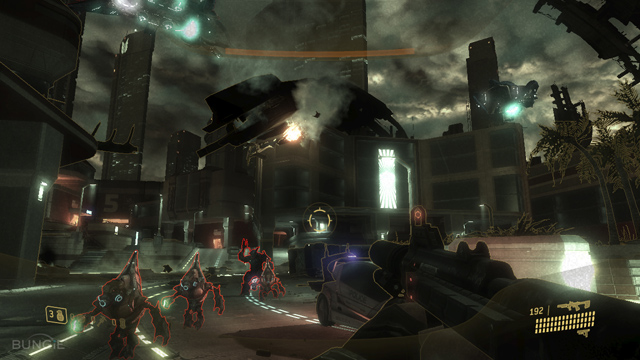 The SOEIV is an angular pod, approximately eighteen (18) feet tall, eight and a half (8.5) feet wide, and nine (9) feet deep with an entry hatch on one side. Within it is a crash seat, communications gear, numerous equipment racks, and a rudimentary control system. In spite of the size of the pod, there is not much room to move around, as the space given over to equipment storage lines the interior attached to the frame.

The trooper enters the SOEIV and straps in facing the hatch. The hardened and shielded communications gear, which is built directly into the hatch, feeds the soldier information relevant to the current operation as well as providing a link between all members of the unit during the drop. While within the SOEIV a soldier's helmet integrated comm units are redundant and are normally only used if the pod's comm gear malfunctions.

A 30-second countdown begins on the commander’s mark, and the SOEIVs fire quickly down through the ship’s belly. The SOEIV is balanced to stabilize in a feet-down position. The pod has limited maneuvering capability, used primarily to coordinate landings, but may be used to avoid defensive anti-aircraft fire. However, if defensive anti-aircraft is present it is almost a mathematical certainty that some pods will be lost. If the armored skin that covers a pod is damaged before or during its entry into atmosphere it has a tendency to fail spectacularly. And this is the reason for the SOEIV's small size—each hit only results in one death rather than the deaths of the entire unit.

UNSC insertion protocols call for the CO’s SOEIV to accelerate after launch, placing it in the front rank of the advance. The reasons for this rule include the strongly held belief that officers should lead rather than follow, should be willing to do anything their troops are asked to do, and should expose themselves to the same level of danger as their subordinates.

The most compelling reason, however, is the need to collect, sort, and organize the troops the moment their boots touch ground. Experience demonstrates that whatever the ODSTs manage to accomplish during the first so-called “golden hour” on the ground will have a disproportionate effect on the success or failure of the entire mission. The commander’s pod is equipped with a lot of gear that the regular “eggs” are not, including high-powered imaging gear, tactical sensors, and a 4th generation "dumb" AI.

After the SOEIV has penetrated the atmosphere, the upper exterior panels separate acting as a drag-type chute, slowing its descent some. At about 50 meters, the pod’s computer controlled breaking rockets engage, slowing the pod further; allowing for a safe though somewhat abrupt landing.

Drag chutes on SOEIVs do fail on rare occasions, leaving the pod’s occupant to die on impact. It’s the death that every ODST trooper fears, and is referred to in hushed tones as “digging your own grave."

Upon landing, each ODST is responsible for stripping their pod of its store of extra weapons, ammo, and other supplies, which are then hauled to the unit’s temporary base camp. ODSTs are used to operating without resupply for extended periods, and they are well known to be at their best when under difficult conditions.

The M7 submachine gun is gas-operated and magazine-fed. It fires 5mm x 23 caseless ammunition. Recoil from all but sustained fire is very controllable. Although the M7 submachine-gun is primarily issued to vehicle crews, it is also a favorite of commando teams in its sound suppressed version – the M7S.

Sustained automatic fire tends to cause the muzzle to “walk” upwards as recoil compounds. Submachine guns, while not accurate over long distances, are particularly effective in close quarters.

The M6 Personal Defense Weapon System is the standard sidearm family of the UNSC. The M6 family is designed primarily for ruggedness and reliability. Certain models have been ‘up-sized’ to be used by Spartan’s in Mjolnir armor. Even though the 'Spartan" issue pistols are larger than the standard-issue variants (~117%) they can still share magazines.

The M6C/SOCOM variant has an integrated sound suppressor.


Romeo sees his true vocation as a ladies’ man. But just because he’s a lover doesn’t mean he can’t be a fighter—and a damned fine one at that. He keeps his gear clean, his suit looking sharp, and his body lean and strong. He may not be a shining example of the UNSC off the battlefield, but on it he is a consummate combatant.


Eddie Buck is a career Marine that has seen more than his fair share of this war. He has had the dubious honor of participating in many of the wars’ most vicious battles; including both the liberation of Harvest and the fall of Reach. That he has survived through it all speaks volumes. Truly, if he was any better he’d be a Spartan.


This Marine was recently transferred from the 26th MEF, part of a Rapid Offensive Picket that suffered near-annihilation at New Jerusalem, Cygnus. Like most ODSTs, his actions speak louder than words.


Dutch’s former life as a road-train driver on Mars did well to prepare him for the arduous tasks of a heavy weapons specialist and driver in the ODSTs. Behind the death’s head rictus, jolly roger, and layer upon layer of black and gray armor is a man of deep spiritual convictions and respect for those he serves alongside.

sweet man cant wait for the game to come out

You... Have too much time on your hands.

And yes, we all know this since like... It was announced?
B

Thank you for copy/pasting the whole of the bungie news thing that we never would've found ourselves... /sarcasm