Colonial Regiment
Well the new content isn't over just yet tonight... heres a link the video of Halo wars gameplay:

Southern Regiment
looks better than i thought it would be

yeah it looks real good, not really my type of game tho, im more of a fps person
S

Colonial Regiment
This is the fact sheet that was passed to the press :

Product Overview: "Halo Wars" is a strategy game based on the legendary "Halo®" universe. Players will command armies of familiar and new UNSC units in its initial encounters against the Covenant, an alien coalition threatening to obliterate mankind. "Halo Wars" will immerse gamers in an early period of the storied "Halo" universe, allowing them to experience events leading up to the first "Halo" title for Xbox®.

With the guidance of Serina, a spirited artificial intelligence (AI) persona, gamers will direct legions of UNSC soldiers, Warthogs and Scorpions against Covenant Grunts, Elites, Ghosts and Scarabs, each group having its own strengths and uses in battle. Strategic-minded players who react well under pressure will emerge victorious.

Created from the ground up for the Xbox 360 console and Controller, "Halo Wars" is being developed by the veteran real-time strategy developer Ensemble Studios, the team responsible for the best-selling and critically acclaimed "Age of Empires®" franchise on the PC. "Halo Wars" can be played online via Xbox LIVE® and through the single-player campaign. Published by Microsoft Game Studios, "Halo Wars" is an exclusive title for the Xbox 360 video game system.

Features:
Features include the following:

• New take on a legendary world. Set in the iconic "Halo" universe, "Halo Wars" predates the original first-person shooter "Halo." Fans of the "Halo" franchise will have the opportunity to experience the early battles between the UNSC and Covenant, the far-reaching conflict that has been diligently followed by the masses in the blockbuster "Halo" series.

Players join the crew onboard the Spirit of Fire, a Phoenix-class colony ship converted for UNSC military use and guided by the AI persona Serina. The "Halo Wars" story line follows the Spirit of Fire's discovery of an ancient artifact during a journey to the planet Harvest, the first planet to be attacked by the Covenant.

• Strategic command of armies in large-scale combat. "Halo Wars" put gamers in command of the battlefield, playing as either of two unique civilizations: UNSC and Covenant. They can counter and crush their opponent by tactically fielding the superior army. Players can also choose among Leaders that possess elite skills which can turn the tides of battle. Using various combinations of Leaders and units, players can create countless strategies tailored to their preferred playing styles and personalized strategies.

• Groundbreaking strategy game for the Xbox 360. Since inception, "Halo Wars" was explicitly designed to cater to console gamers and bring to the Xbox 360 a genre that has typically been played on the PC. Gamers can easily command and manage powerful armies, effortlessly control troops and incredible machines, engage in epic battles and expand their empire using an intuitive user interface for the Xbox 360. "Halo Wars" represents the true next-generation experience, combining a masterful control scheme using the Xbox 360 Controller with the award-winning strategic gameplay only Ensemble Studios can provide.

Developer Information:
Ensemble Studios (http://www.ensemblestudios.com) is one of the world's premier entertainment software developers. Ensemble Studios is known for its blockbuster "Age of Empires" and "Age of Mythology®" game series, as well as the upcoming "Halo Wars." Ensemble's titles are distinguished by the highest-quality art and gameplay dynamics applied in familiar historical settings, and appeal to hard-core gamers and mass audiences. Ensemble Studios is based in Dallas, Texas.
Click to expand...

sounds like fun but even tho we are gonna be UNSC wont we get destroyed?
S

Dallas huh? Maybe that's the reason there's that secluded warehouse in Ft Worth with the Bungie logo on it. Cooperation in development?

Loved AoE, cant wait for this. 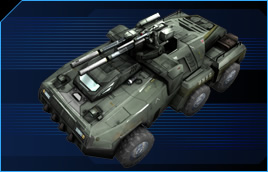 Cougar.....yummy!! Reminds me of the G.I. Joe Artic Half-Track Tanks.
A

Its a shame its for the 360, with those kind of consoles rts are a hellovalot more complicated, i remember starcraft for the nintendo. compared to the computer its a total pain to use.
J

Haha, cougar's will probably have some kind of jokes associated with them if Rooster Teeth gets their hands on it.


Whats Bungie's take on Halo Wars? I'm assuming it was microsofts decision to turn it into a RTS and not Bungie's...
S

Southern Regiment
Magic Iron
Ah, so is this like Warcraft?
D

I hope its like Command and Conquer 3. Do you know if they will make a Mac version?
J

Spartanspork said:
I hope its like Command and Conquer 3. Do you know if they will make a Mac version?
Click to expand...

I highly doubt MICROSOFT will publish a game for macintosh... but I suppose it could happen if hell froze over?
Last edited by a moderator: Feb 25, 2017