Nice to see another Pep build with resin and bondo. excellent work.

Re: Ok cool lets do a build (HD mkvi Tucker)

Update! Hama is in two weeks and nothing is done. I'm going to do as much as I can in the next few weeks in hopes to get it done on time, but if all else, it'll be a lot closer to be done by Pensacon or Kamicon within the next year.

I am fully aware that this visor is crooked, but by the time I'm done it wont be obvious from the inside or outside, which is a plus. It still manages to fit on my head and not hurt me so that's probably a good sign.

A bunch more pieces are primed.

So now all primed are:
Helmet
Hand pieces
one shoulder
front belt/codpiece
2/3 parts of both shoes

it's probably a super bad idea to paint the outside before the inside but whoooopsps
Also I decided to be a cheater and use most the mistakes I make in the bondo phase as battle damage, to save time money and sanity.

Re: Ok cool lets do a build (HD mkvi Tucker)

I'm still alive and my project is too!!!!
I'm usually working on it during the summer since I'm a full time student, and last year during both the summer and fall semester I had to keep a job, too
(I'm never working at a fast food restaurant ever again)

Let me give you some updates since this thread was probably assumed 100% done done dead:

> There are only 3 pieces left that I haven't touched since they've been resin'd ---> The back torso, and the two shin pieces

> Hand pieces, all 6 shoes pieces, front codpiece and one shoulder have all made it past final paint

>I have some shoes for the shoes, having a little trouble attaching everything. I've tried hotglue, to no avail.
I also tried loctite.
In the heat.
Like loctite says not to do.

> Helmet and that shoulder have been padded. I can raise my arm up without the shoulder piece digging into my arm and I can nod yes or no without everything slippy sliding around.

> Both forarms have gone through a round of Bondo autobody filler, but they'll need a little more before they're actually done They dont look half bad so far.

Paddings. I also plan for velcro on the undersuit so i left a little breathing room for that.

Hands and feet when I was painting them

I added some detail to the front so it'd kinda mush around the visor.
I did this with the visor in and covered head to toe in painters tape

From when I was trying to configure the shoes.
They'll likely look something like this when they decide to cooperate.

That's that second arm that's sitting in the garage now drying from spot yesterday.
Also the forearms, how much detail is on them. I want them to be a little more rounded
even though, i put spot on some places already >>;;;;;

Spot on the helmet (Why aren't these in order?)

Helmet full and repainted and happy!!

EDIT: Oh yeah I wanted to tell you guys a story about Hamacon. I missed it this year, but my last post I didn't talk about it and I wanna.
So there was a spartan there last year when I actually went, a foam builder, and he was talking so bad about resin building and this guy had no idea that I was a resin builder. I was just standing there like "uhuh, surething, yep,"
I have nothing against foam building but that guy was a lil silly
I took a picture with him, though, and his armor was super nice looking, Halo 3 standard MJOLNIR, red and white spartan.

He did says some things, of value, though. He wasn't dumb or anything, he was just kind of biased. He brought up how you cant really sit in resin armor, so I've been thinking ever since how to get around that. It's my new mission. He also complained about breaks, which I'm not sure how you could break resin armor unless you're fooling about or someone pushes you over, or unless you put stress in places that aren't meant to be stressed (ie: a non–reinforced butt piece that you sit on directly). I'm going to try and be careful, though, about what things I attempt in armor.

Midwest Regiment
Your build is coming along very well, keep it up and keep up the updates!
Also, nice to see another Tucker around here

So in the month of October leading up to a certain costume contest (unrelated to my build, but related to my motivation somehow) My younger cousin convinced her family to help her build an extremely elaborate costume for that competition and still hyped up on adrenaline that night after the competition told me that I should finish my entire build in the next EIGHT DAYS so she could show me off at a fall festival the next Saturday.

So I did, actually.

There were quite a few times during the week where I really didn't feel like it and just wanted to sleep and she told me no... which, I'm glad she did. 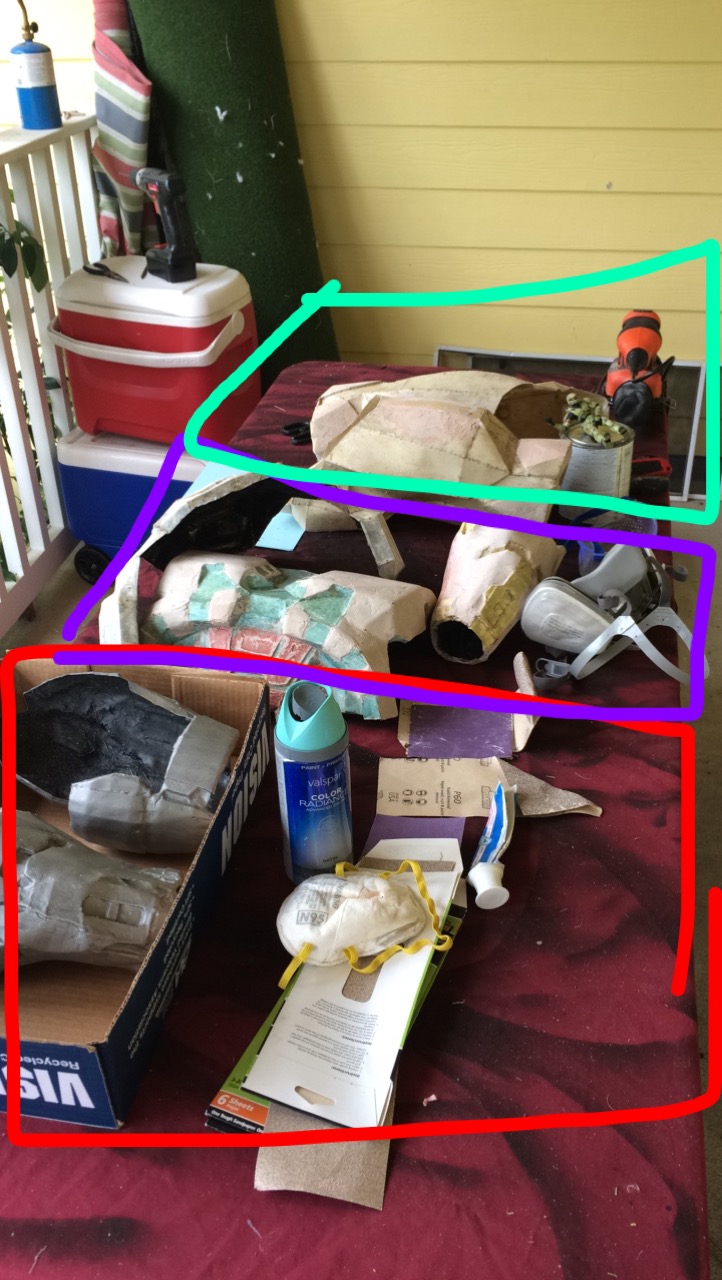 This was where I was at Day 1 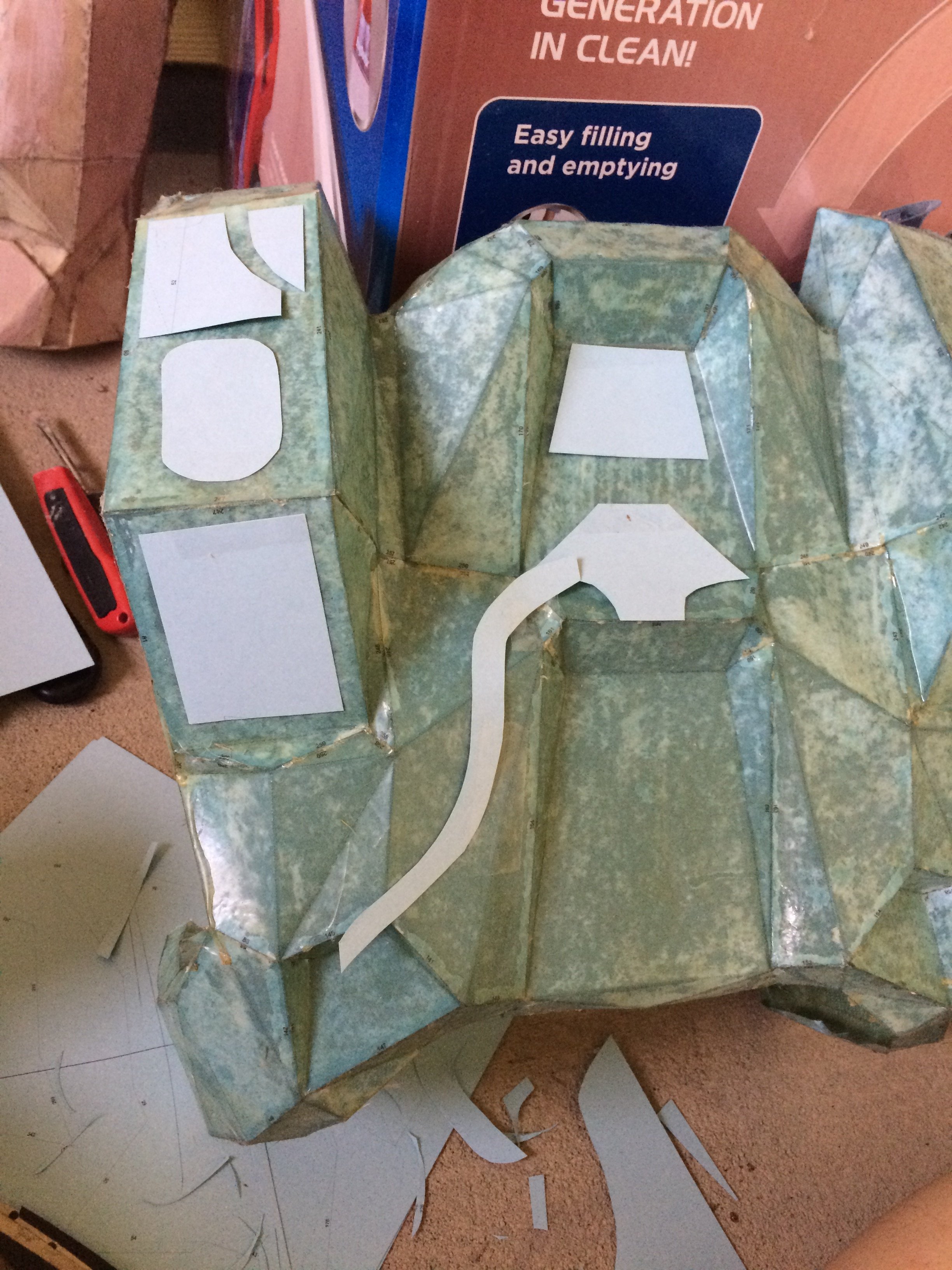 Here is me marking the back piece with cardstock 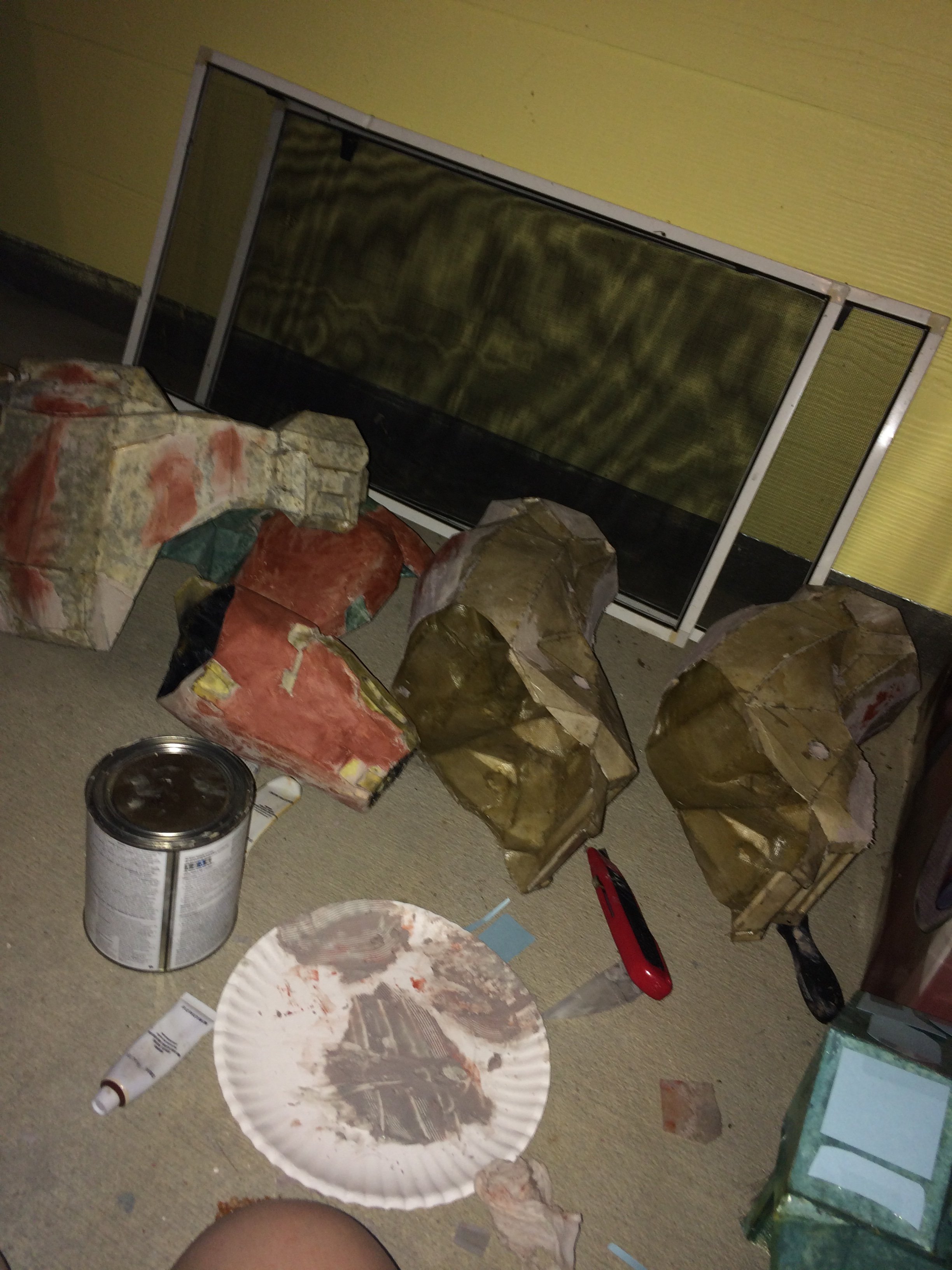 Spot and Bondo-ing one night

working on the back piece

Finishing the back piece!

I also had this blinking light kit that I made in a class that I decided one evening to add into my helmet even though I originally intended not to add lights. 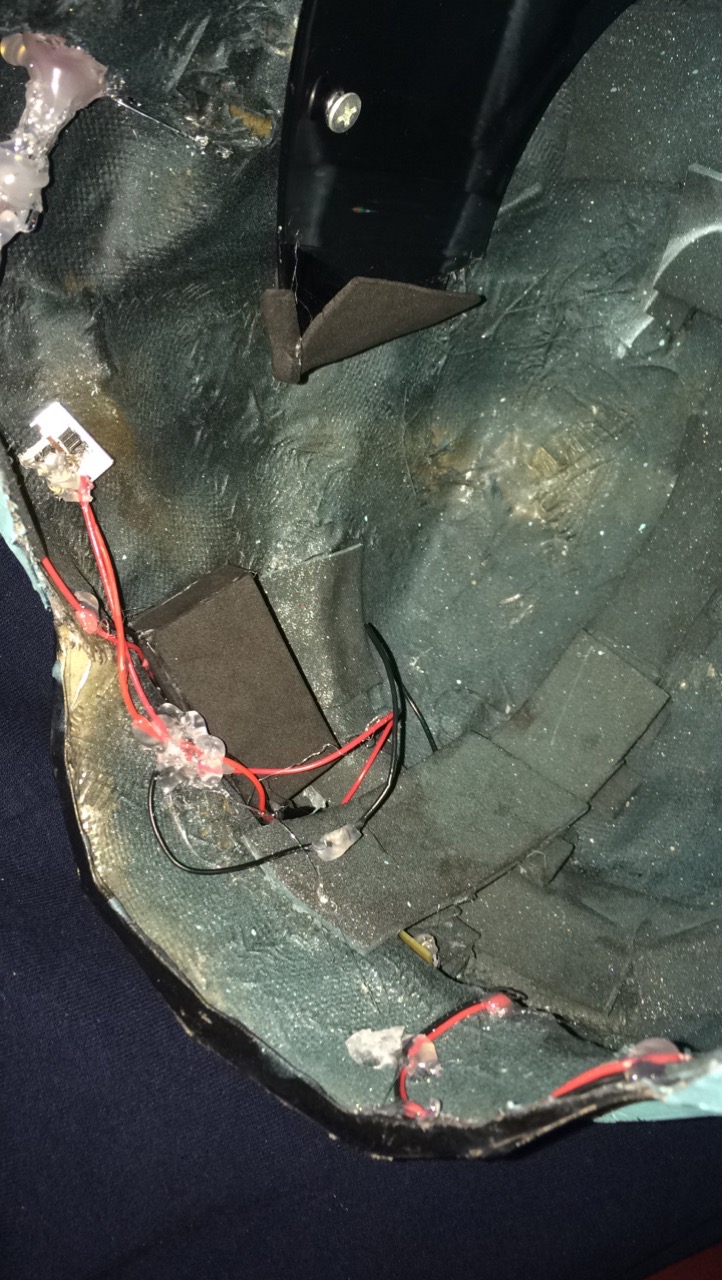 The little foam square is where the battery goes. I also ended up putting some padding over some of the wires since I don't intend to remove them and don't want them to get pulled at. 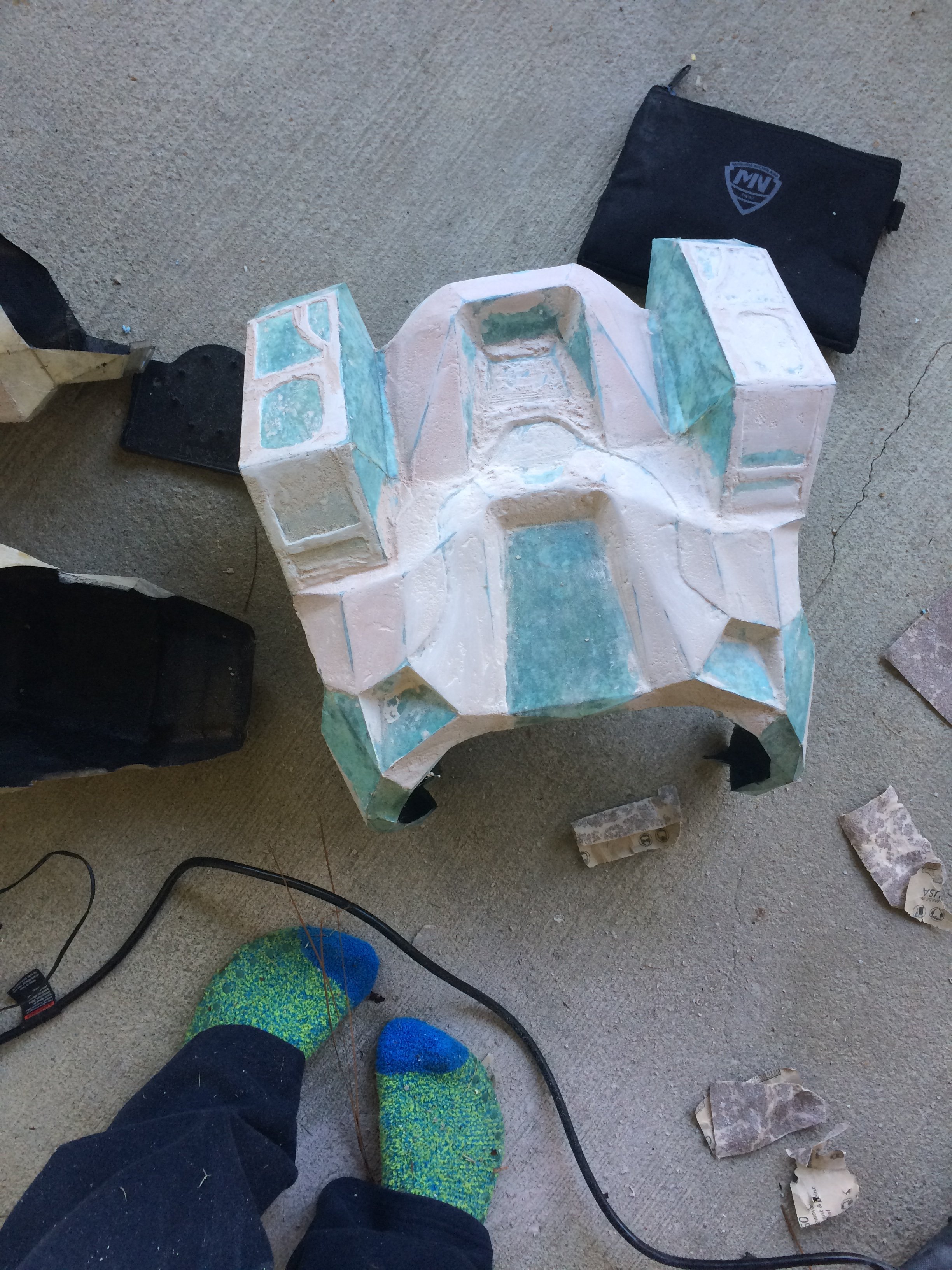 Here is back (and my feet) after going through a lot of sandpaper (rest in piece). This was Friday, the day before the festival and also before a different even I'd decided to volunteer for a 6am...
so I just pulled an all–nighter instead of giving up.

Last of the painting! I ran out of paint halfway through (and was also in the middle of DND over discord and ran to Home Depot to get more. Luckily it was only 8pm).
(Side note: my DM got onto the topic of RvB without even knowing what I was working on.) 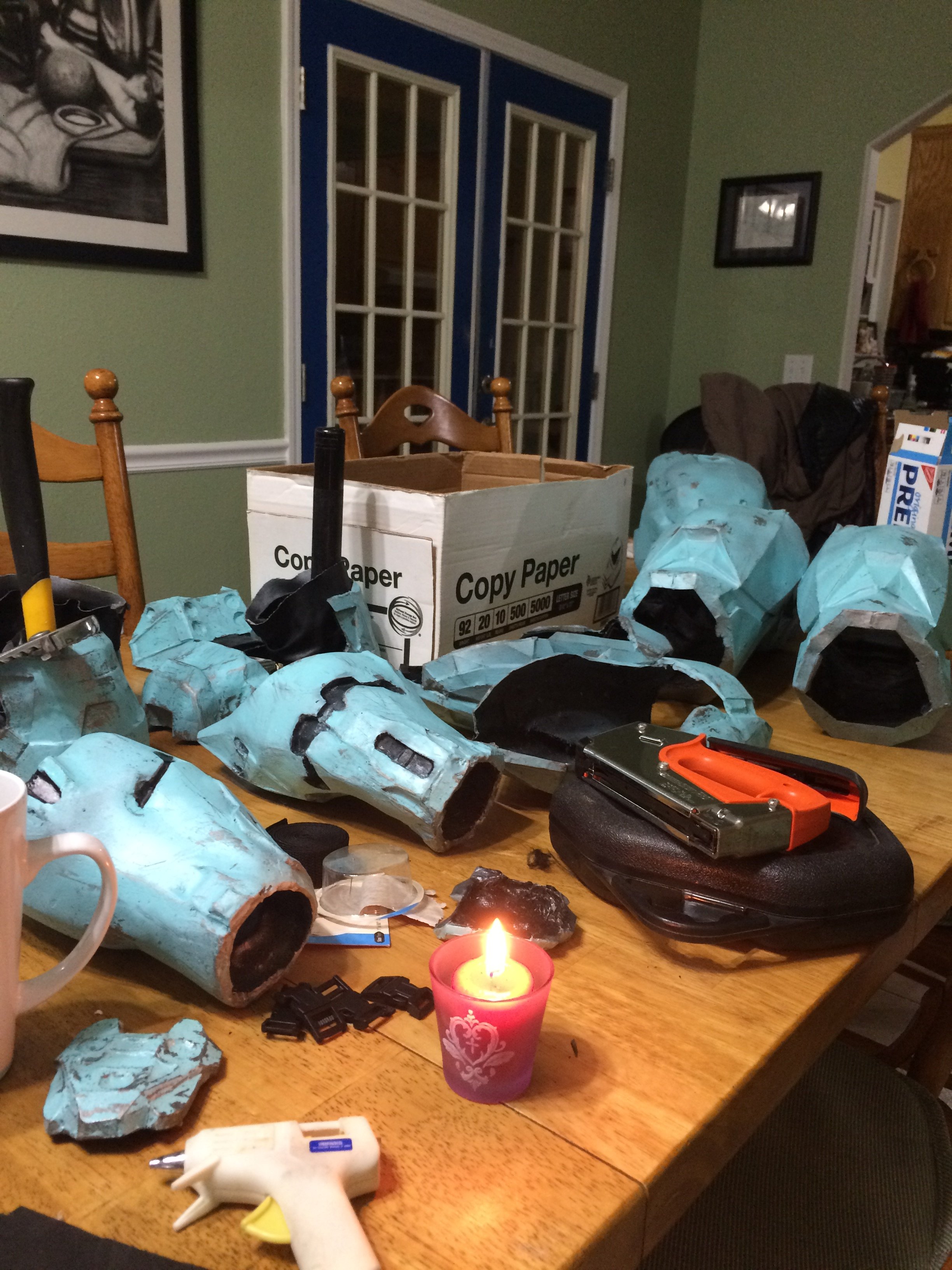 So here's most everything laid out on my Aunt's kitchen table. The heavy tools sitting in the shoe pieces are because we decided to use gorilla glue since Loctite and Hot Glue both previously failed. It was about 10 or 11pm when I started strapping and the back piece was still drying on the porch.
(And the Candle is to sear the edges of the Nylon Strapping when I cut it because we didn't have any lighters, just matches).

Here are some pieces as I was working on them. At first I wasn't satisfied that they weren't as seamless as some of the nicer builds I've seen on here, but when I got around to seeing it all on me later it was noticeable to me anymore. 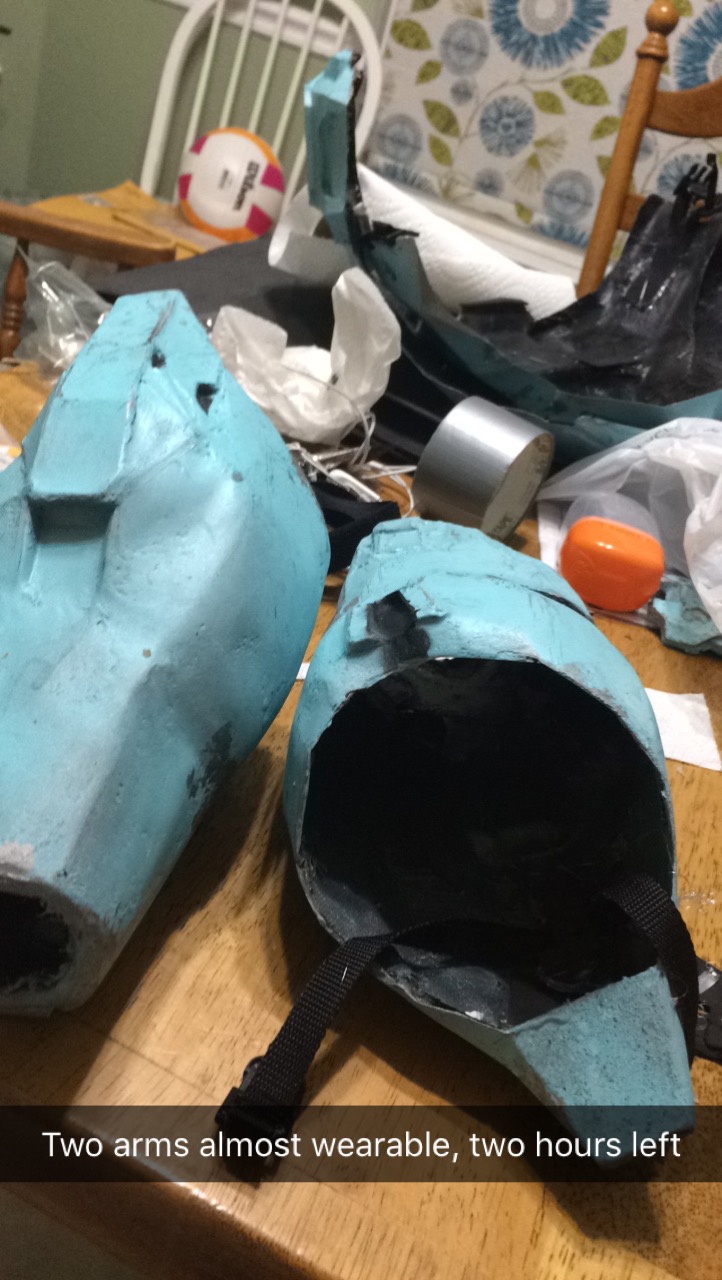 I was really pushing it till 530 when I had to leave. But I somehow did it and nothing fell off of me the next day!

If anyone has transportation tips please tell me some. They didn't shift around much but stacking them made me nervous even if it was convenient.

Here one of the people I live with helps me put on my armor while that younger cousin takes pictures.

And Here we are!

There are some adjustments that need to be done (some places that still poke and scrape and a few pieces that don't stay 100% in place but nothing actually broke off. That, and some minor paint touch-ups since I admit I did rush myself a little. I also did not finish a formal undersuit (I wore a sweater and leggings) so that's still on my to–do list.
Thank you to everyone who left me tips of encouragement with this! I'll continue to post any edits and maybe even accompanying weapon builds in this thread but I am considering it technically finished!!
(And If I find anymore nicer pictures I will be sure to add them here) 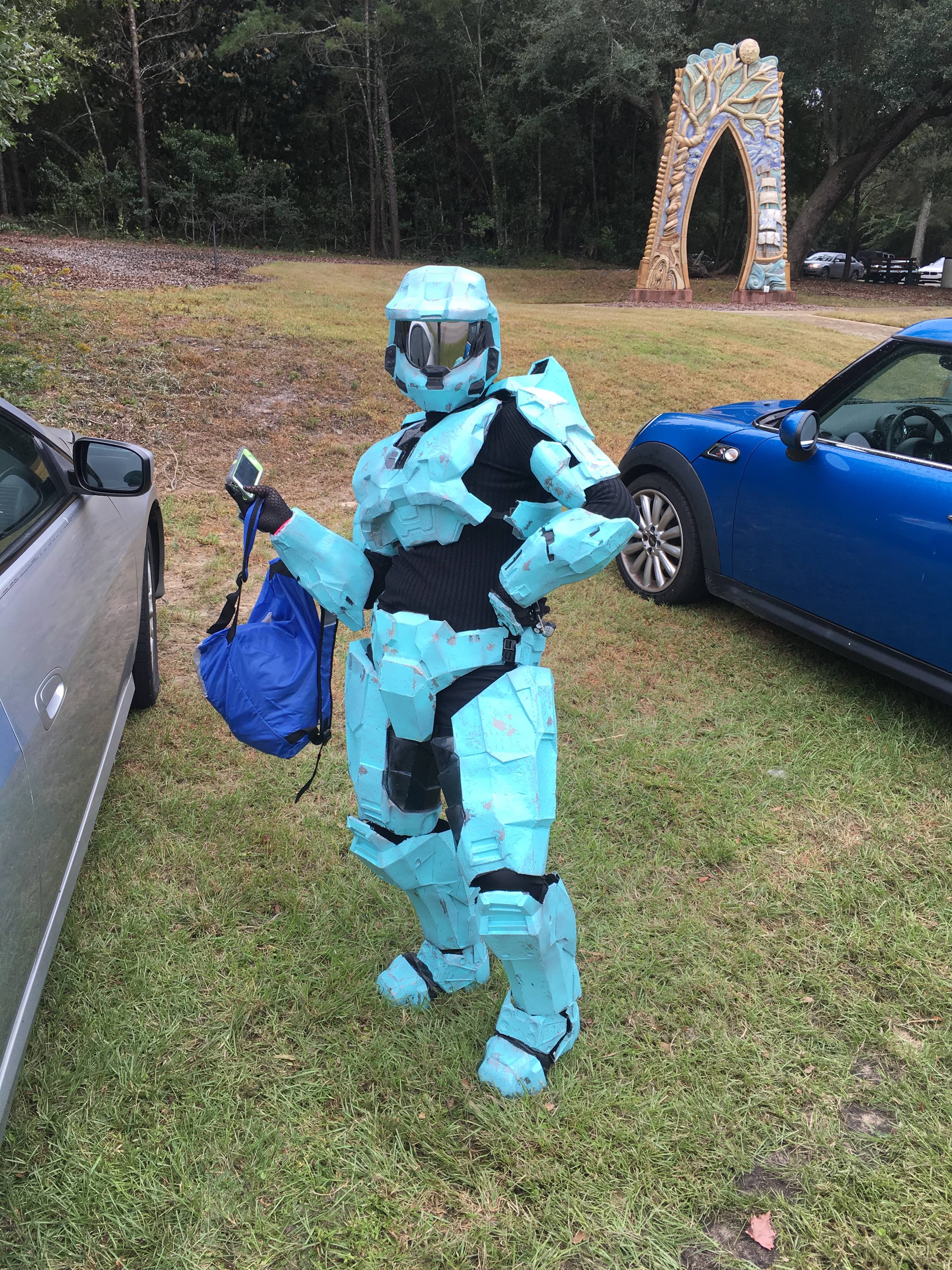 Canadian Regiment
If no one will say it, I will... " Bow chica wow wow"

Leiutenant Jaku said:
why?... just why?
Click to expand...

Southern Regiment
Watch this video it funny it about tucker

Leiutenant Jaku said:
why?... just why?
Click to expand...

Lol I was trying to pick something lightweight but I think I might have to just put pockets in the belt because even that tiny bag was difficult to carry around.

Lol out of context I get how the other user got confused. Honestly, I'm surprised no one said it before.

Pacific Regiment
405th Regiment Officer
Washington
Community Staff
Great work! I can't imagine how tired you were after a week of intense building and then walking around in costume! Pretty awesome to have friends and family help motivate you.
You must log in or register to reply here.
Share:
Facebook Twitter Reddit Pinterest Tumblr WhatsApp Email Link

HALO SPACESHIPS, 3D printing all kinds of ships in the Halo array
4 5 6

Magnets vs Elastic/Velcro for Mk IV