Well I have decided that I will indeed make the height change to my armor after all. I am only 5'7" tall and being a female that's not bad actually, since I seem to tower over all the other females I see around. When this is done I should be at or a little above 6' tall in my armor.

On top of that I was looking at my poor boots and after all the wear and tear on them have decided to repair them and give them a much needed update and renewed detail work.

So as you can see here wearing these is no easy feat, and personally I have gotten tired of feeling like I just went into the boxing ring after every time I have worn my armor.

I have purchased some platform sneakers from a website headquartered in Southern California to fix the issue with the height and the ill-fitting boot plates.
Here they are:
Technologic Platform Sneakers

Of course they will have to be painted black so they don't show through any openings in the boots but hey I think this will work well for my build.

I also bought some 1/2" thick foam to do the detail work over the existing fiberglass parts. I have cracked fiberglass in several pieces and also some major damaged pieces from over wear. But I will go over that in another post.

So here are the boots right now with my old airwairs inside of them. The main problem is that I adhered the plates to the boots and that made them not very flexible. A HUGE design flaw on my part and I feel bad about that but now I can fix it. After wearing them over and over again without repair the back of the boot plates began to degrade and dig into me. I put black tape over the edge to keep it from continuing but that was just a bandaid over a major bleed, the d**m thing still cut the heck out of the back of my leg and so sitting down was never an option for me. 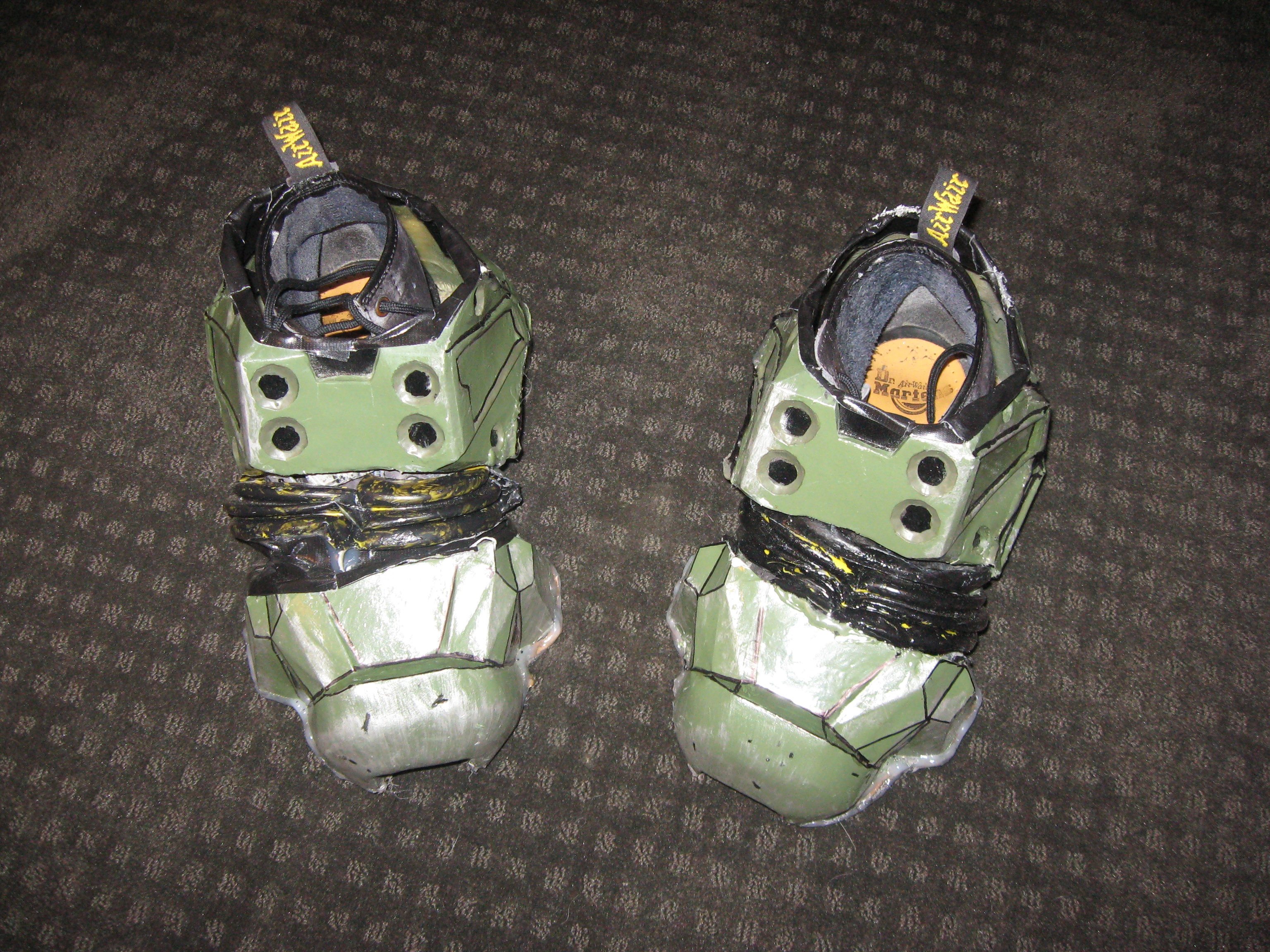 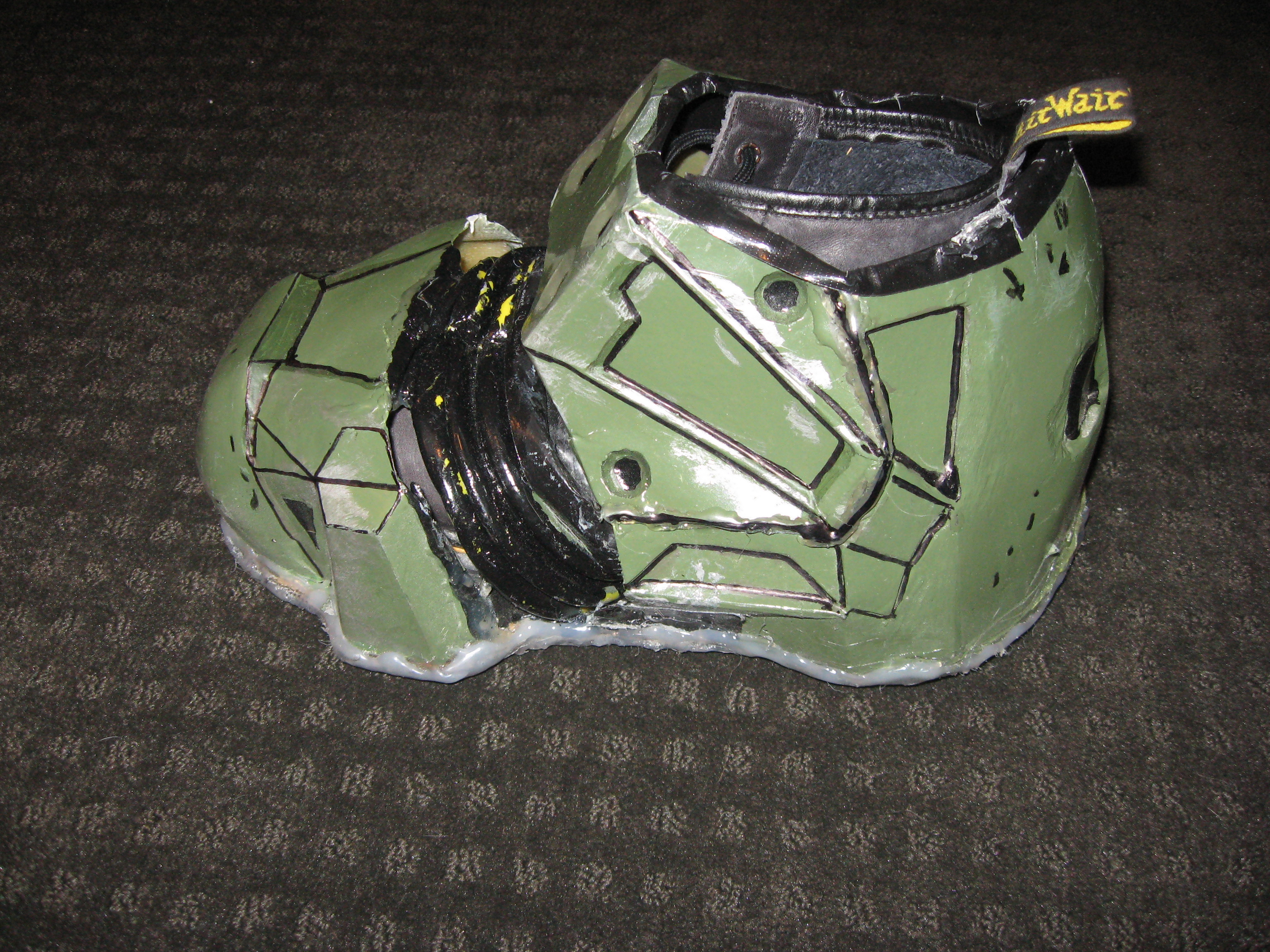 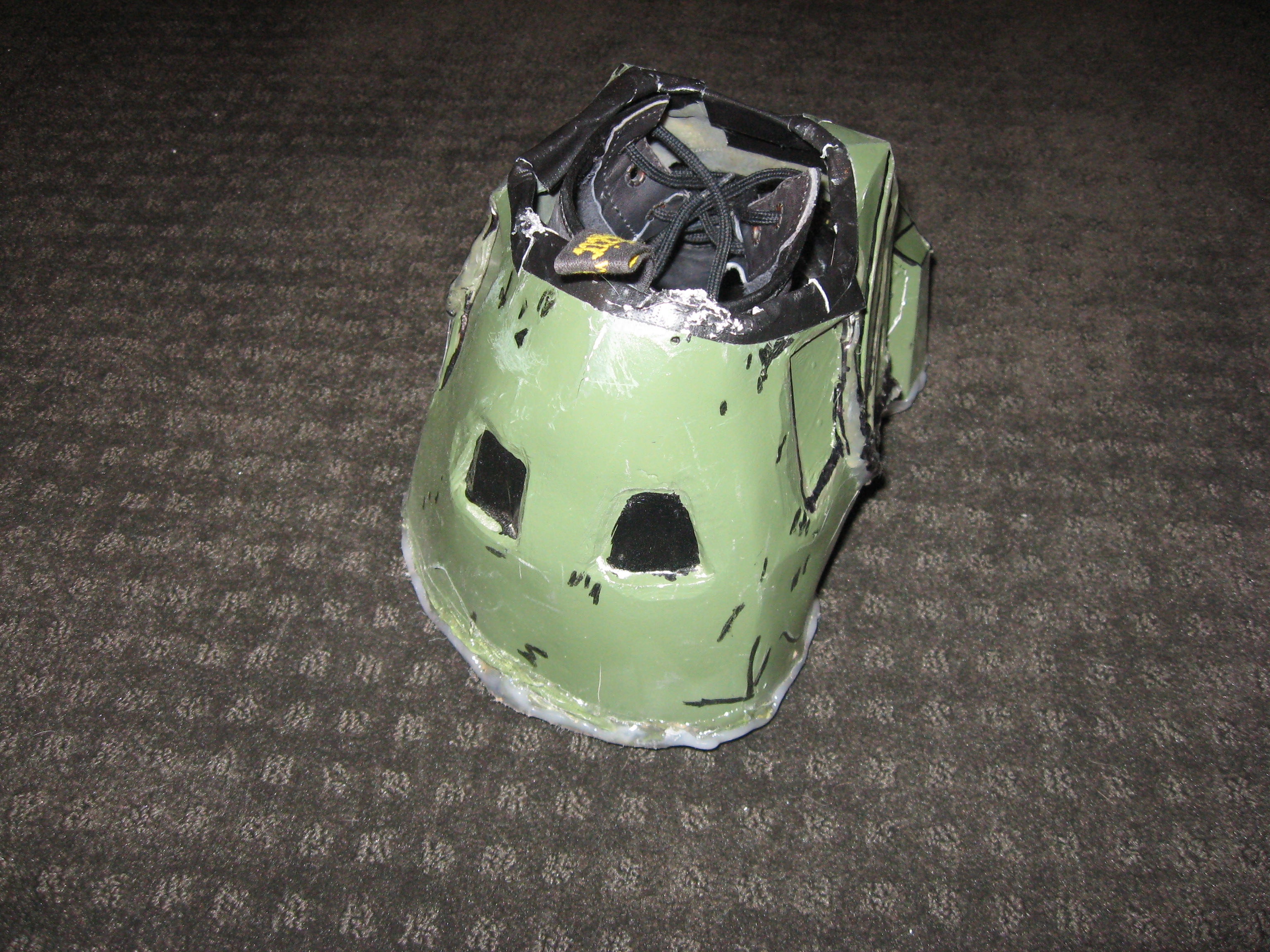 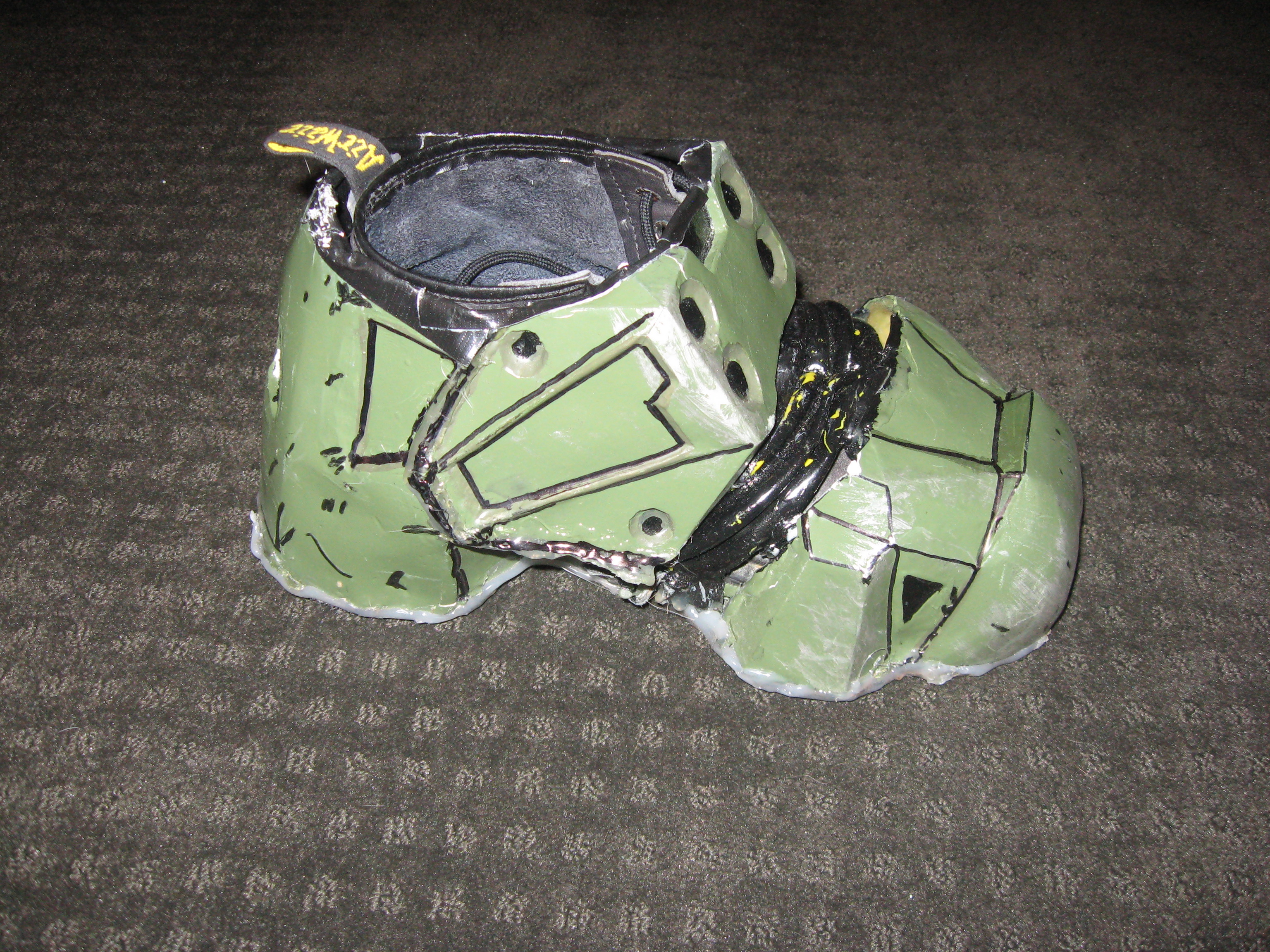 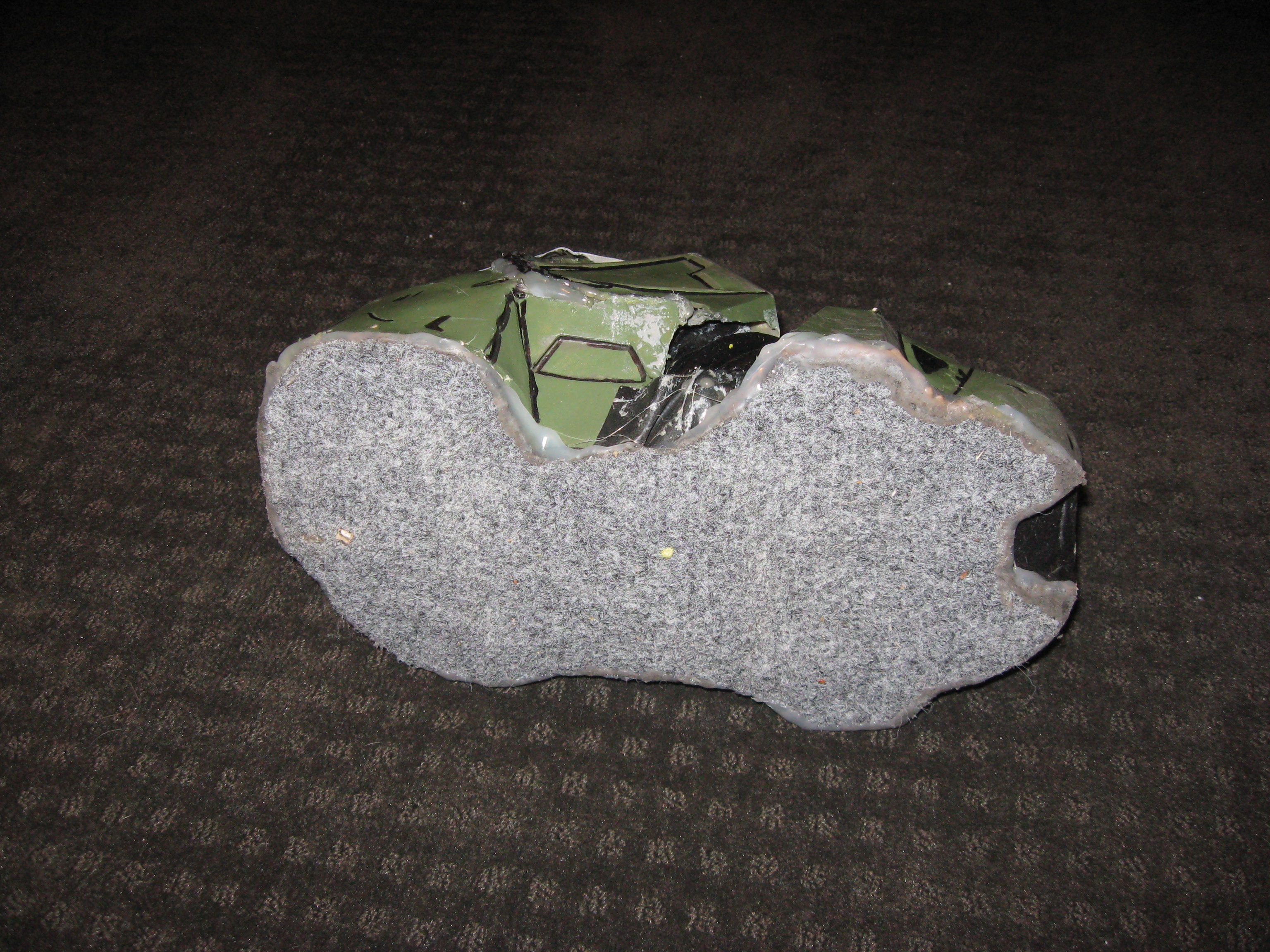 So the next BIG problem was the walking surface itself. When I initially built these I had a rubber mat that I cut up and glued to the bottom of the boot area. The rubber was less then ideal and after a couple wears it fell off and basically shattered in several places. So I went to a cardboard and carpet setup for a while. As long as it didn't get wet I thought I would be ok. WRONG AGAIN! I couldn't climb stairs very well since the surface was slippery and the carpet I put on these was almost the same way.
So I hope to get all the micro fractures and the footing problems fixed in this update. The new shoes won't be here for a few days so that's ok. I have to go back to work anyway's and won't be able to do anything until next weekend. 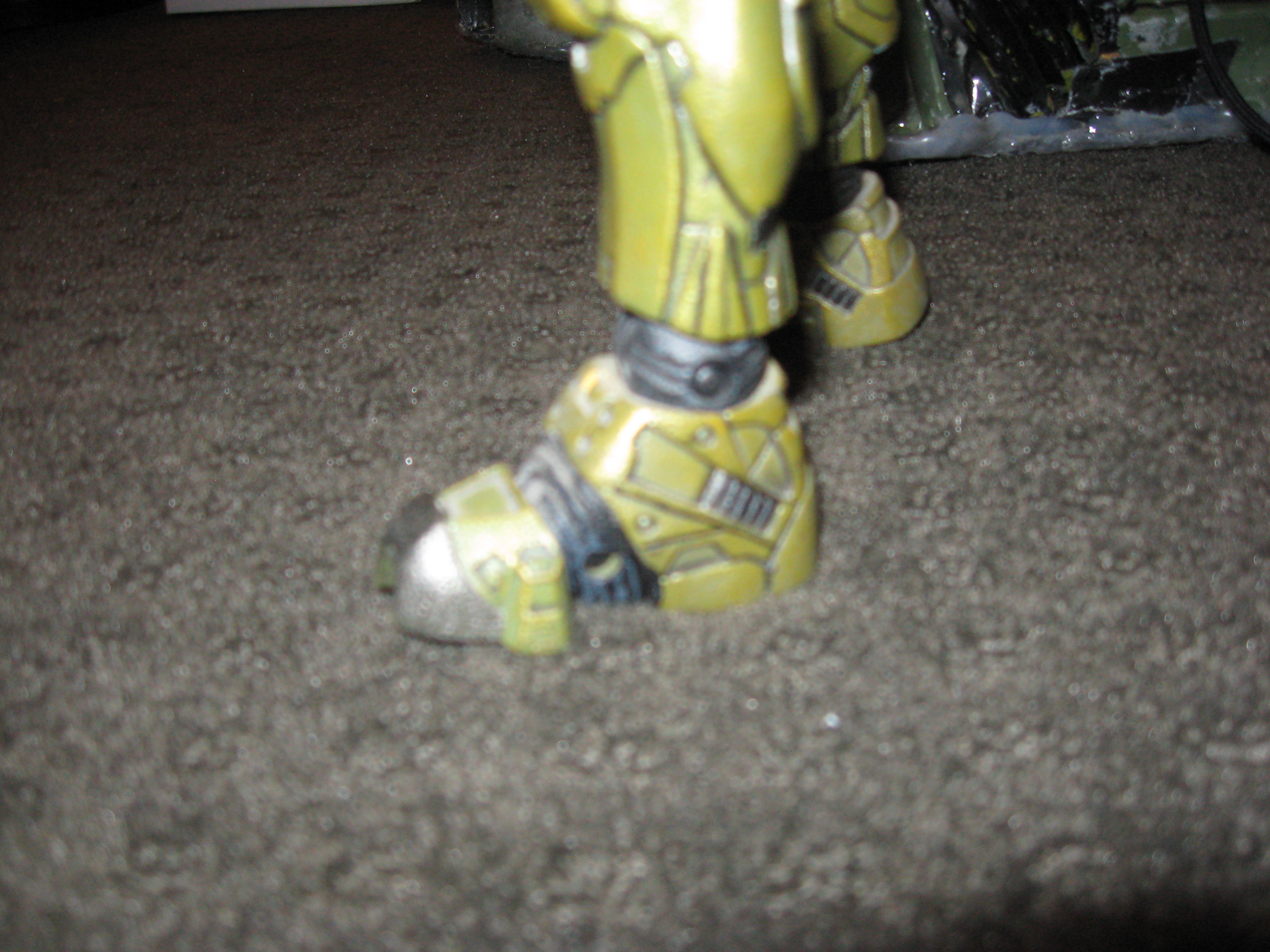 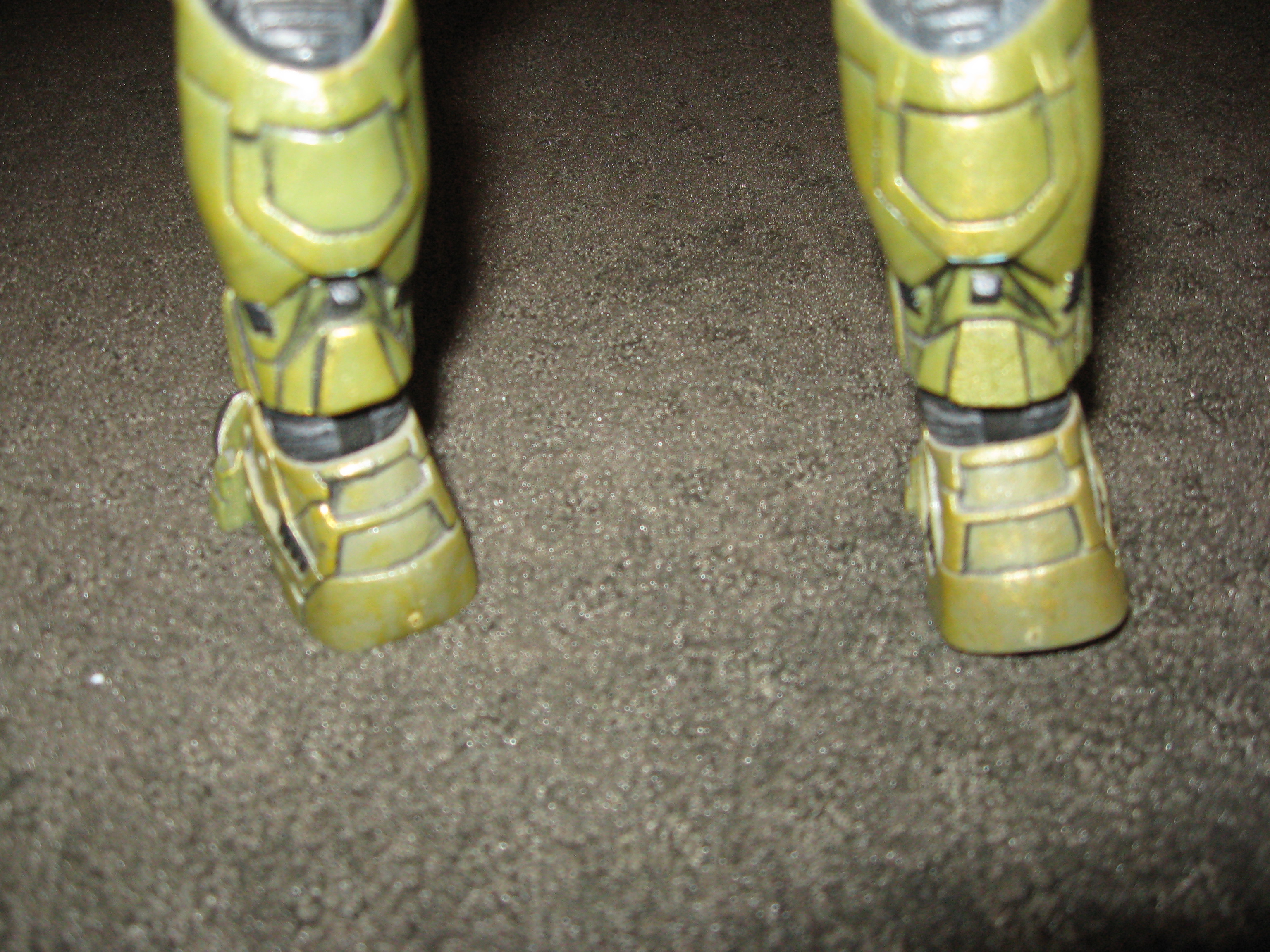 So these are the feet of my Master Chief figure I have been using as a loose model for some of the detail work. I will be replicating the backs of the boots on my boots after I remove the airwairs from the boot shells. I hope this will be a fairly easy process and I don't destroy them during the disassembly process.

So everyone stay tuned for the next load out of my project update!! Here comes my attempt at rework and detail integration and I hope for the best. I just hate the thought of opening up my build and changing things. I won't fix anything that's not broken but I have anxiety about messing this up.

Well here goes and see you all soon!!

Canadian Regiment
I made a MKVI suit for may son a while back out of foam. For the boots I used men's size 13 flip flops for the soles so he could at least walk and have some grip. I also left a gap that way his feet could move a little more naturally when taking a step. Elastic bands were used to keep them together.

Maybe this can help you some way.

Pacific Regiment
So I got the shoes the other day and here they are compared to the boots. I might go with an idea like what you did PaiganBoi or I might make a different design so the sole of the shoe underneath can contact the floor. Not sure yet but here's what they look like. 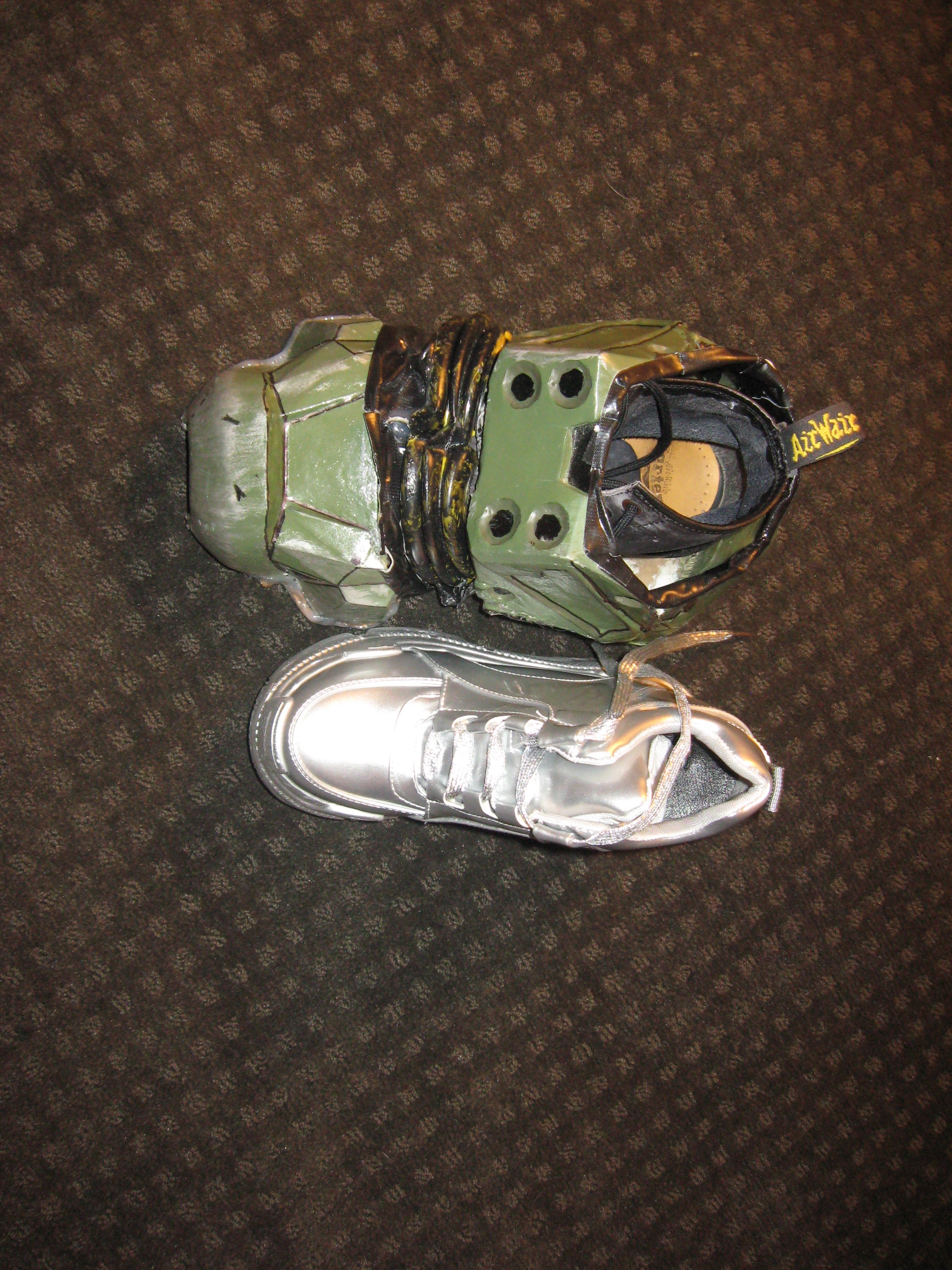 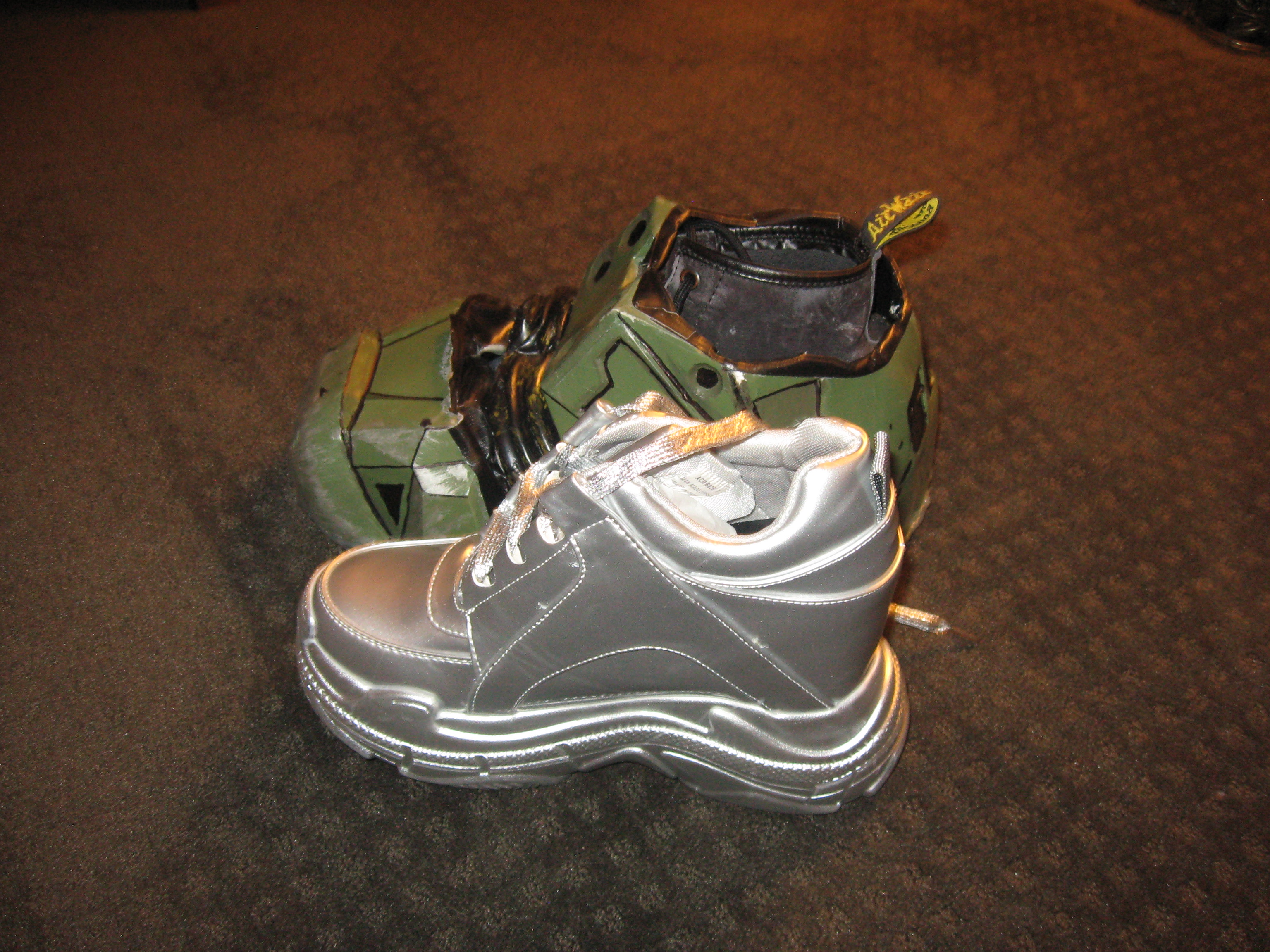 So overall I don't really need to change the boots just take out the old ones and insert the silver shoes into them. It will give me an overall height change of about 5.5 inches. So there we go not bad!!
See you all soon!!

Community Staff
Division Staff
Canadian Regiment
Badkitty....tell me more please about the boots. Us height challenged need to stick together. haha Is it a flat platform inside or is it angled like heels? I'm assuming the later, but if that is the case, is it dramatic or comfy?

Yeah I am going to spray paint them black first and shove them into the boot ASAP. I had no idea they would be ...THAT SILVER. It's so bright that I was surprised when I opened the box.

FANGS said:
Badkitty....tell me more please about the boots. Us height challenged need to stick together. haha Is it a flat platform inside or is it angled like heels? I'm assuming the later, but if that is the case, is it dramatic or comfy?
Click to expand...

So the silver sneakers are angled on the inside but they are very comfy. I like the fact that they are flat on the outside so I don't have to make a special platform to adhere them to and they are just short enough I don't have to change the boot plates!!

They are also a little dramatic in the fact that they give me almost 6" of height increase when they are mounted in the boot plates.

Stay tuned for the rest of the install and update as I rip these the old apart and get new pictures up.

Community Staff
Division Staff
Canadian Regiment
Might be just the help I need for ankle plates on my ODST!

FANGS said:
Might be just the help I need for ankle plates on my ODST!
Click to expand...

They should work for you. After I dry fitted all the pieces to them I couldn't even see the shoe itself except where the top is opening but that's typical.

Pacific Regiment
So I have fitted the boot pieces to the shoe and decided today I will go get some yoga foam blocks from the store, cut them down some and add another few inches to my height under the shoe's walking surface. I don't know how this is going to look yet but here is a picture of the shoe inside the plates before the yoga block mod. 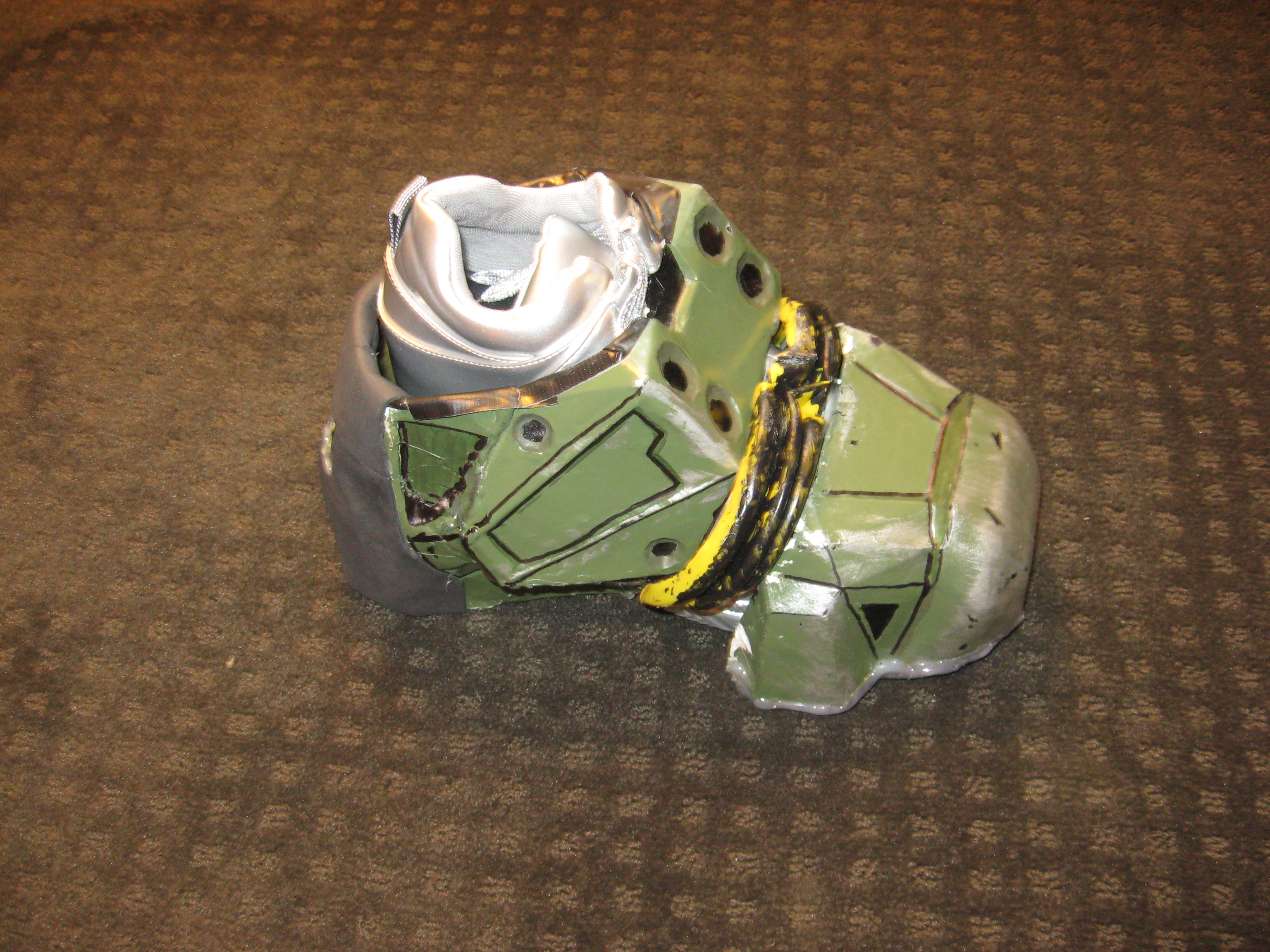 Pacific Regiment
Ok so I went to the store, bought the blocks and decided.....nope no going to do that. These look so cool like they are and with the foam over the back where that got damaged after they get repainted later next week I think that these are a wrap!! I think being six foot is enough for now.

Thanks for all your support out there guys and gals!! Feel free to stop by if you have questions or comments!!

3d and pep kicking my butt

Following the foot steps of Buckets To Boots
2