Division Staff
Southern Regiment
405th Regiment Officer
I know this is a far shot. I haven't seen anything anywhere on this. I'm trying to find any information anyone might have. I'm thinking of making a floor outfit for upcoming convention season. I was thinking about doing an uniform jacket. Such as what Commander Lasky is wearing in the cutscenes of Halo 4. For instances. or Captian James Cutter from Halo wars. If you have any help with this on any suggestions let me know and I'll be putting pictures up when I make a little headway.

Southwest Regiment
So far, I'm only able to find this.

As far as a pattern, I wouldn't know where you might find something more specific than dress pants and a shirt made with a thicker material. Maybe a policeman's uniform or something from an army surplus store to start with?

That vest looks like it could be altered from a catcher's vest in some way (although it seems to be a bit thinner...), and the spine looks straight off of a biker's jacket. I don't know if that helps any, but that's where I might try to start if I were taking on the dress uniform, myself. ^^

Mountain Regiment
The uniforms worn by Col. Lasky and Capt. Cutter in gameplay are more working/combat uniforms than dress uniforms. That'd be more like what Admiral Hood was wearing at the beginning of Halo 2 (Officer Dress Whites) or what the Marines were wearing in "We are ODST." If you're looking for something to walk around in at a convention, you're probably looking for something more like a Service uniform than a Dress Uniform. For that, I reference you to what the instructors were wearing in "Forward unto Dawn." 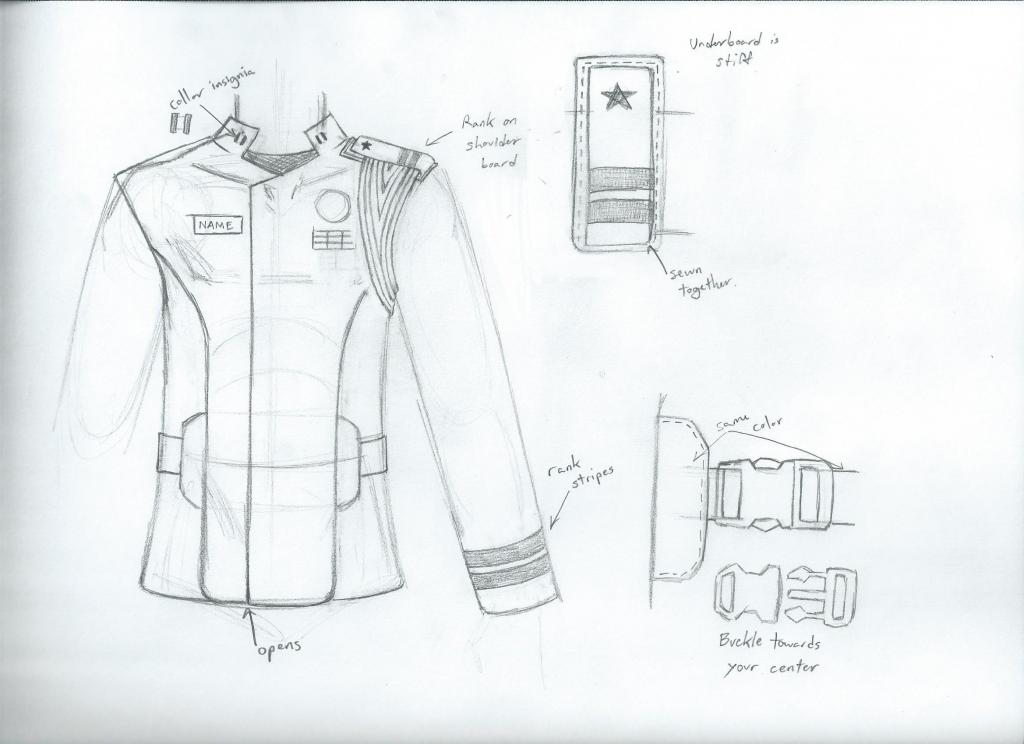 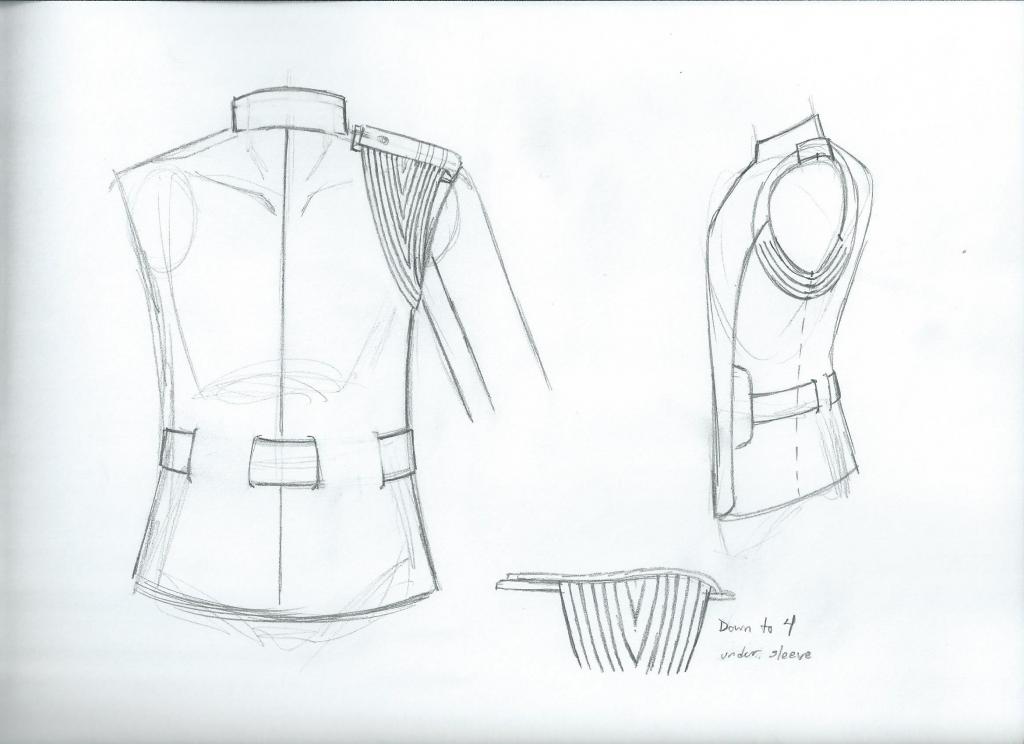 I drew this up with Navy Lieutenant (O3) bars and insignia. It's a good rank to go with because every officer (at least in the Navy) makes O3 automatically after 2 years, just like every Navy recruit makes E3 after 2 years just for breathing. However, make sure you check which branch of the military you go with before you pick your rank. A Captain in the Navy and a Captain in the Marines/Army are very different. The color on the uniform changed with every scene due to the lighting. It looks like it could either be a dark olive drab with khaki accents or a dark charcoal gray with heather gray accents. I'll let you choose, but I'd do the OD/Khaki for army/marines and the gray combo for Navy/Air force. But that's just my opinion.

This uniform features a squared off Mandarin collar, with shoulder boards featuring rank striping and collar insignia. The sleeves have a second seam just like our uniforms right now (it's supposed to make movement easier) and rank stripes at the bottom of both sleeves. The shoulder board has a hard, stiff bottom board, so use some decent interfacing, and a softer top. The top piece is slightly narrower, connects at the outer edge, and pins/connects at the side towards the neck. Make sure to leave some space between the two to thread the stitched detail through.

The stitched pieces that thread through the shoulder board wrap around both front, back and under the armpit. This was a harder piece to map out. On General Black, there are 6 distinct rows on either side of the center triangle that go down to 4 under the arm, but only 4 rows on Lt. Col. Mehaffey. This might be because of the more narrow shoulders or that it's the difference between male and female uniforms.

The back features a center seam on both male and female uniforms. The belt goes around the back and through two wide belt loops. Just 2, on the entire uniform. The belt connects to 2 rounded off pieces from the front of the uniform, with parachute/side-release buckles that connect quickly after. The buckles are mostly decorative, but from Navy uniform knowledge, both buckles probably buckle in towards the front center.

As for the front, that is another tricky part. I left the left side uncovered to show that the front connects about halfway down the sleeve seam. This sis not a separate piece. It is firmly sewn onto the coat, but maybe an inch in from the edges to create that shadow. The two sides of the coat will overlap a little, but this should lend itself very well to a covered zipper. Then it's ribbons on your left, name tag on your right, and a command patch or embroidery above your ribbons. (the blank circle, make up whatever or put in the 405th insignia!) In the movie, the Corbulo insignia was directly embroidered onto the uniform.

If you want to go for authenticity, most military uniforms are make out of wool. Terrible, terrible wool, but any suiting material should work just fine. Now, put you're coat over a pair of matching plain pants and some well shined boots, and you should be good to go at any convention.

If you want any notes or references on other uniforms, just PM me and give me an afternoon to sketch it out.

Pacific Regiment
I found a couple companies on Amazon that make a double breasted jacket (thats technically what the top is called) Doublju Mens Breasted Coat Black is one you might be interested in.
A

Pacific Regiment
Here's the page. I dont know how close it is to what you want but it already has the area for the shoulder rank bars.

I've compiled some photos for it here. Should help.

I've also got some colours sorted.

Cotton Drill (or homespun) is the material you'll be wanting if you wish.
The grey area is, if not close to, "school grey".
The black area is either black or (ace of spades EB 439)

The belt is a black parade/webbing belt with black buckles. (6 inch)

The shoulder guard is black, with a dark grey flock material.
The stubs and Spine are dark gray (or similar to ace of spades above)

Alternatively, theres the uniform in Halo 4 Forward Unto Dawn which is green. In Ep 1, there's a shot of then Commander Lasky in a black version. I have a nearly completed green version I'm trialing if that helps at all.

Anyway, hope this helps you out man. Good luck.
J

A simple way to create a UNSC dress uniform would be to modify an existing uniform. Navy and Marine Corps dress uniforms can be found at most surplus stores.

Southern Regiment
or finding one at was in a short halo video.

Division Staff
Southern Regiment
405th Regiment Officer
I almost forgot about this thread i had started sorry i haven't gotten back to it. Thank you for all the suggestions i am still looking at doing a dress Uniform. There are some cons that i just cant fully dress in armor. or days when im just not going to be attending for very long to fully dress up. This would be perfect for.
T

I can't believe no ones sewing these? I'd buy one!
E

There's a bunch of different dress uniforms you could go to. This guide will cover the ODST one, which looks a hell of a lot like the USMC Dress Blues.

The benifit is it's easy to find. The detriment: You could get yelled at for "sotlen valor" and it's not cheap.

So if you're looking for a set of ODST Dress Blues, and don't mind sinking a few hundred bucks, here's some links.

The difference is the Officer one is more expensive & more accurate, and the Enlisted one is cheaper but less accurate and has a higher likelyhood of a jarhead yelling at you for "stolen valor." I'd suggest checking a nearby Army/Navy Surplus or Craigslist for a better jacket. Prussian collar recommended.

White gloves: https://www.marineshop.net/snap-wrist-officer-gloves-500220
You could probably find them cheaper elsewhere.

I'd dye the hat grey, if I were you, but white works.

In addition to that, the "devices" you want are...
Ribbon Bar: http://www.medalsofamerica.com/Item--i-RH12
If/when you get this: DO NOT FILL THE ENTIRE BAR. It can hold 10 ribbons, but the UNSC ODST leave the bottom row open.

Expert Badge: http://www.medalsofamerica.com/ItemList--Marines-Badges--m-743
For this, choose one of the awards that's Marksman or Expert, per character. This goes low on the chest.

Paratrooper Qualification Badge: http://www.medalsofamerica.com/Item--i-Basic_Parachute_Badge
This item is an essential. You can use this, the SEAL trident (NOT recommended), or the French Paratrooper Badge.

The Aiguillete: http://www.supplyroom.com/us-milita...-braid-shoulder-cords-with-2-nickel-tips-cd-e
This is optional, and should only be for officers.

I think that's about it!

Sorry in advance for the necropost.

European Regiment
I also made one. With a bit of a twist from my US army uniform. I am making it screen accurate soon.

Mountain Regiment
405th Regiment Officer
Hey GreY2231, this post has been down for two, almost three years. Please be mindful not to necro post. If it's older than 3-6 months, let it lie, please.

Btw, I still am a fan of the uniform!