I am uber psyched aboot Assassin's Creed.
Got it Friday. Haven't really been able to play it much....but it's still awesome.

Altaïr's signiture weapon in AC is the hidden blade, which is a retractable knife hidden on his left arm that can be used for killing targets at very close quarters without creating any immediately alerts.

"Altaïr's most interesting weapon is a mechanical dagger that it used for close-range assassinations. It is mounted on the inside of his left hand gauntlet, and when deployed, extends between his middle and pinkie fingers through the space left by his amputated ring finger. This amputation was part of the initiation for becoming as assassin of the Hashshashin sect."
-Wiki

Well my friends, I wanna make it.
I was thinking of using springs and some mech to lock it in its retracted position until the mech is unlocked by pulling a string attached to one of my fingers, thus springing the knife forward into its extended position. 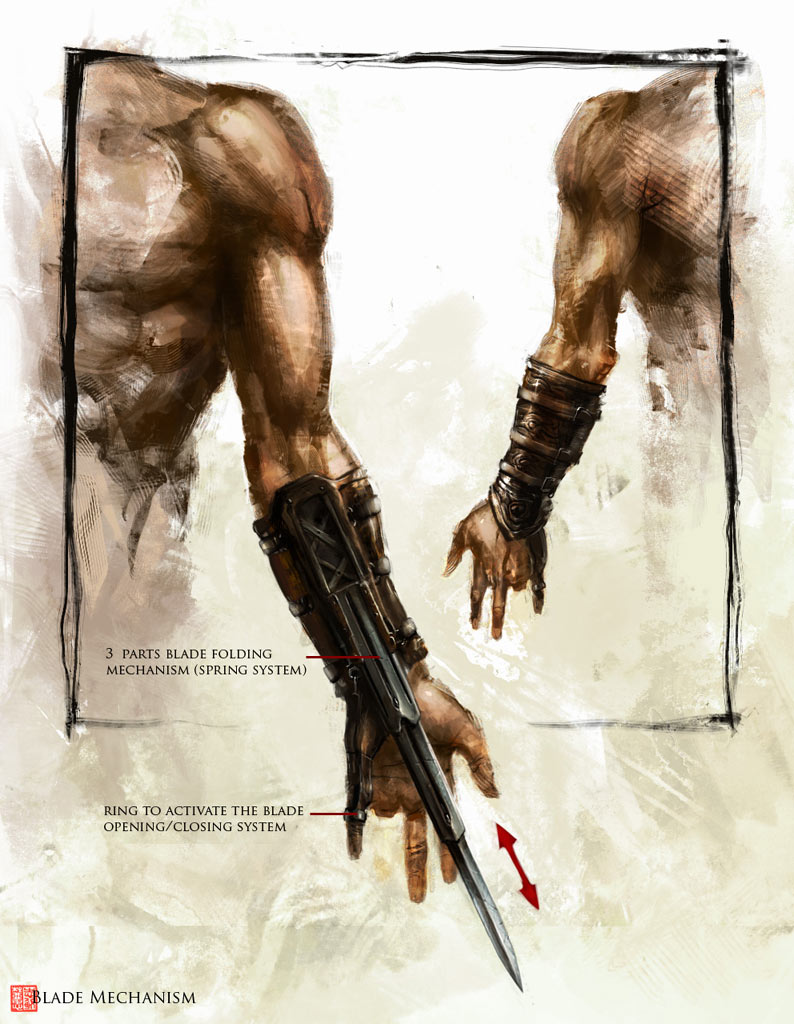 No way man! I wanna have the first Assassin's Creed costume! I played it a bunch this weekend (crazy story BTW). I am gonna start this costume once my other projects get finished. I suggest checking out thehunterslair.com. It's a Predator costume forum and I know that they have a bunch of tuts on doing spring blades.
T

papamurf812 said:
No way man! I wanna have the first Assassin's Creed costume! I played it a bunch this weekend (crazy story BTW). I am gonna start this costume once my other projects get finished. I suggest checking out thehunterslair.com. It's a Predator costume forum and I know that they have a bunch of tuts on doing spring blades.
Click to expand...

Assassins creed is so good i played it since the first day it came out. I am happy to say that i have beaten it already and that you are in for a heck of a game...
Last edited by a moderator: Feb 25, 2017
X

I love assasins creed! And yeah go for it! That'd be an awsome prop to make.

P.s The assesins creed main character has his wedding ring finger missing?! Could this be a hint at the story?
2

Be careful you don't amputate your own hand or fingers.
R

just don't use a real blade..

metal is banned from most conventions i know of anyways
P

Yeah, a wooden rod or a plastic mold would suffice.
P

http://www.youtube.com/watch?v=BIBoB_ErZCY...feature=related lego sliding mechanism with plastic blade, a bit of cardboard, some resin, some bondo, and a sander and a good shell can also be made, as well as a more accurate blade.


SLIGHT SPOILER....you have been warned.

Awsome game, I am getting a bit tired of all the assassination missions, anyone mind telling me if there is anything else that will happen after all the targets are eliminated? I am on my seventh target, currently gathering information. It's just getting repetative to constantly do the same thing 9 times, so I hope that's not what the entire game consists of.

Oh and, IDK how you plan on wielding that hidden blade, it does say that Altair had to get his finger amputated in order for it to work.
C

Awesome game. One of my favorites. A little repetitive though, but worth it.
I plan on makeing Altair's outfit as well.

As for the wrist-blade, there was a topic on CT.N about the RC blade. That might help you.
R

This is actually going to be made for a fan film I'm thinking of filming...so, of course, the blade will be fake.

Problem with alot of the lego ones and stuff is that they all use centripetal force to extend the knife.
I want to use springs and a locking mech.
You see, I don't want it accidentally flying out while I'm running or something...
D

i was thinkin of making one of these with a real blade. not for cosplays and what not, just for around my house to show it off to friends. my uncle (spartan161) is prolly gunna help me make it.
when or if i get it started i will post pics. iam tryin to work on a new halo3 helm, and make a predator gauntlet with real or wooden blades.
A

Here is the greatest costumes from Assassin's Creed

but yeah there was and Altair that was at oni-con down here at houston, he looked really awesome, i think i might work on that costume for oni-con next year.
R

That's my favorite of the fan films for Assassin's Creed so far. The fighting could use work, but everything else was superb (location, costumes, story, lighting, etc).
D

But you see? That uses centripetal force to eject the blade. That would be too easy to do.
I'm looking to use springs instead.

That's my project I'm gonna do too

After Lots of Research, I'm gonna try to do a simple sliding metal pieces. I tried Lego, it's really not that hard if you try to build one yourself. Sadly, I didn't have enough this specific Lego piece so LEGO SHANK = FAIL (for me)

One of the people you would need the following,

-Ring Clamps/Horse Clamps - To hold the weapon on your arm.

-Screws - Little ones lol It used to attach the clamps onto the slides.

-JB Weld - He said it was a sort of glue, my first thought of it was like Resin

-Slides - This might as well be the hardest piece to find. He said he got some from a tool box and took the slide out of it. I don't have a toolbox I can use (Well nothing I don't want to waste) Another problem was I was looking around Lowe's for slide but all they had were drawer slide which obvious too long. The lowest was 16" I need one only 7" or lower. He said it was a three part slide (Three slide in one, to make it extend more than a two part lol) I was thinking if I would be able to cut off the slides or would it mess up the slide itself. So I'm thinking of getting a two part slide, cause there actually shorter than the three part slides at Lowe's.

Everything else...Screw Driver and some padding to make yourself comfortable.

This is his first version, he said he made a second version which can be activated by the finger, a more accurate Assassin's Creed Hidden Blade.

Heres the site where he shows you how it works but little on how to make it since people are trying to patent his ideas so he's gonna be really not showing how to make it till his patent is official. Does anyone know how long it takes to patent?
I

I would like to know how to do a wrist blade, such as the one predator uses.
G

To make the blade spring out couldn't you make some kind of thing on the back of your hand that activates it so there is no chance of stabbing your self through the hand. Just an idea.