Hey folks, ready to begin my firebomb grenade. I will be sculpting it but i would like to sculpt atop a peped version of it, buuuuuuut i'm on a mac.

Could anyone out there convert the firebomb grenade pep version (i believe on page 8 of the designer) to JPEG form?

Whoever does this first will receive a free firebomb grenade cast when i am complete.

My idea is perfect. I will be sculpting the tops and bottom of the grenade leaving the middle up to fate.

My middle idea: Two clear plastic tubes, on thinner then the other so that they have space between them when place inside one another. On the very inside i will fit an ultra bright 10mm red LED light that can be turned on at a small click button switch. Between the two tubes a will insert an orange gelatin (not the eating kind ) and frost paint the inside of the most inside tube so that the LED light is not seen but rather the whole thing simply glows. On the outside of the inner tube i will "tattoo" on the black design so that it will show through the orange gelatin. The tubes will be sealed so that the gelatin does not leak and the LED's battery pack will be fixed into the bottom of the grenade and the switch on the top. It will be very durable and an entirely FIIXED pieces, to prevent rattling and leaking. So guys i need that pep converted and i can start as soon as tomorrow. This project will take roughly a week and a half-2 weeks to complete and i can sell casts, and complete grenades once complete.

It's like a freaking sticky, that you don't have to hit the opponent perfectly with yet they still boil in their armor like Jiffy pop. 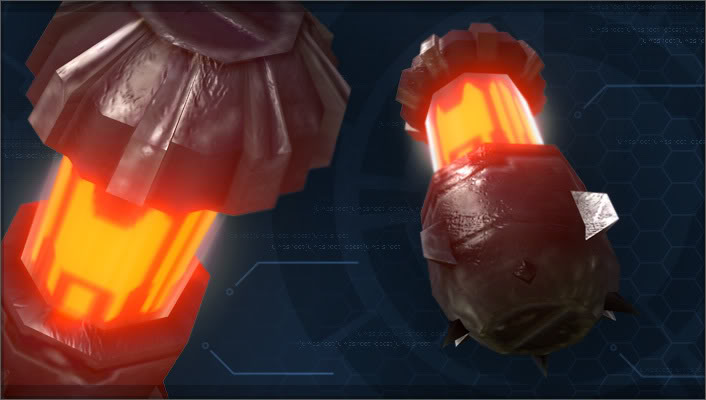 here i converted it to jpeg for you
K

HOOOOOOOOOOOOOOLY CRAP! Are you serious? Well thanks. Is it scaled to the size of a humans hand is the letter sized paper?

also i no its only 3 piece but how do they fit together?
S

I wanted the middle tube to b as long as my hand is wide. Is that roughly how it is and is it for legal paper?
S

Krylon said:
I wanted the middle tube to b as long as my hand is wide. Is that roughly how it is and is it for legal paper?
Click to expand...

update-gunna start the peping tomorrow. Those folds are gunna be a bitch. Any idea of how to jjust curve the paper rather than all those folds? Maybe I'll just do the ends and put PVC in the middle for the initial sculpting and molding. Your input?
S

Hey, any progress? And garland has made a new, almost every detail model.
S

but i think it would be easier if numbers were put on.

Props Help with the next step of a grenade