I've been thinking on building a MkVII armor since Halo Infinite came out, and with all the "Halo The Series" hype, I've decided to start my armor. It'll be a slow process, my goal is to finish it by december (for the 405th Regimiento de México reunion). For now, I'll be working on the templates, scaling, unfolding and all that stuff.

But basically, this is hoy my armor should look:

Still trying to decide if I make the Anubis helmet out of EVA Foam, or 3D printed (I'm close to finally buy a 3D printer), but that's a future issue, (all the armor will be foam tho). Gonna prepare all the armor parts and then, start with the build.

Canadian Regiment
I look forward to see your build! I love the look of the new MkVII armour!

I've done with scaling and checking the unfolds of all the pieces. 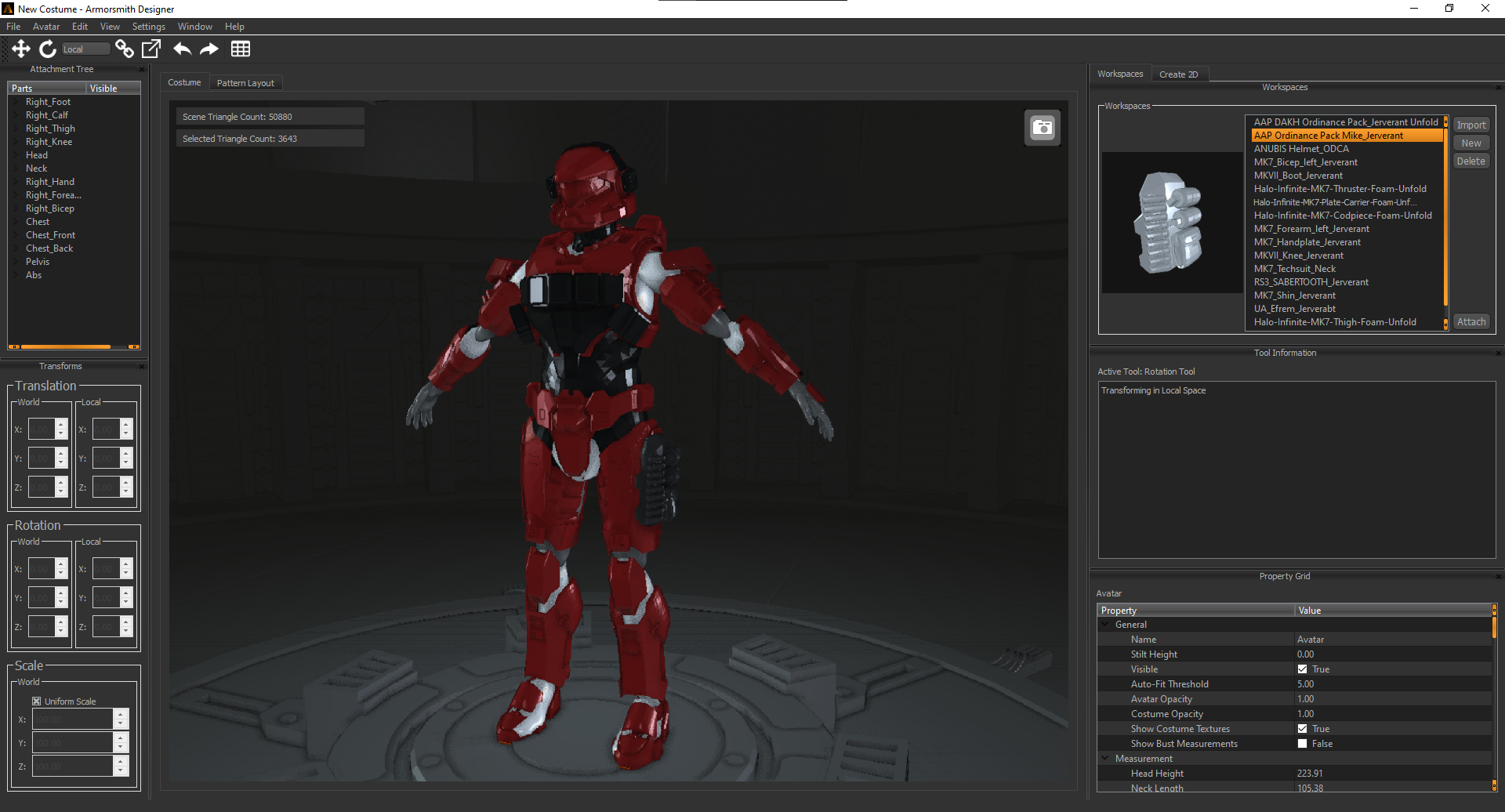 Now I'll start with the building! I hope to have some progress in the next 2 weeks (since I have a lot of commissions to do lol).

Here it is! The first pieces of my MK7 finished!

Honestly, I think these are the best gloves I've ever made for any cosplay. Here's how I've build them:

Started simply by buying a pair of nice/cheap gloves from AutoZone. I like these ones because of the texture on the top part. Then, I built the armor pads with 3 layers of eva foam (one 4mm, and two 2mm).

Then, I drew my hand in paper, and sketched the finger pads to look the closest to the game, but also to not be very dificult to build in foam. Then, traced the clean template (which you can download here), and made 1 finger to see how it looked, and I liked very much

Then, I realized I was missing some details from the top part of the glove on my sketch, so I did some tests in different types of pleather, and did my best to sew that top piece still, not my greatest sew job, but a nice looking one with the armor pad on the top. (Also, I'm planning to sew the undersuit, and replicate these stitches on it).

Then, proceeded to build all the fingers, and glue all pieces onto the gloves (except for the armor pads, which I painted separately). This was a good way to mix some paint and decide the final color that my armor would have. I've made a mix of vynil paint (house paint) so I could use it with my airbrush, and the result was not disappointing.

Last, I added some weathering (using some new techniques), and covered the fingers and pleather with black PlastiDip, to have a much more uniform color.

And that's it! the Gloves were done

I think the next pieces I'll be building will be the forearms, but in a few weeks, meanwhile I finish commissions and other stuff.

Australian Regiment
Those are indeed some fine looking Spartan gloves! I’m very excited to see how the rest of this build turns out!

Also Anubis Gang! Personally my favourite infinite helm (especially when combined with the cat ears which match’s the theme well).

Zoogami Snowfox said:
Those are indeed some fine looking Spartan gloves! I’m very excited to see how the rest of this build turns out!

Also Anubis Gang! Personally my favourite infinite helm (especially when combined with the cat ears which match’s the theme well).
Click to expand...

Anubis gang! I'll definitely make the cat ears, but I think that would be the last

Some gorgeous looking gloves there! Really excited to see this suit come to life

Colonial Regiment
Those gloves look fantastic! I cant wait to see the rest of the suit as you make it!

Lets gooooo! You are doing a red Mark VII as you mentioned
Also, those gloves look absolutely amazing! Can't wait to see more of your progress man, you are gonna kill it

SlenderDummy said:
Lets gooooo! You are doing a red Mark VII as you mentioned
Also, those gloves look absolutely amazing! Can't wait to see more of your progress man, you are gonna kill it
Click to expand...

Thank you!! You served as inspiration for me to build my mk7 #RedTeam

It has been a month since my last post on this thread (I think this is how it's gonna be, montly posts), and I said the next thing I was gonna build were the forearms... then I bought a 3D printer lol. So here it is!! The Anubis Helmet!! #AnubisGang

This was my first 3D printed helmet ever, and it was a fun project, also learned a lot about 3D printing. (the model was downloaded from Thingverse, it's MoeSizzlac's model)

At first I tought the scale was quite small, and maybe it is, but, it fits great, so I'm gonna keep it.

The helmet was printed in 8 different pieces, and glued all together with epoxy glue.

After that, you know the drill: bondo, a LOT of sanding, more bondo, more lots of sanding, spot putty, until the surface was smooth.

Even that Moe's model was super accurate, I've found that it was missing some details, compared to in game's model, so I added them with 1mm foam and by carving some lines.

After that, I started painting! The red color it's a custom one I've made to use with my airbrush. The other colors I paint them by hand with brushes. About the weathering, I've been using this technique by some time, and I really like it: it consists on drybrushing hard edges with black paint, then silver paint on top of the black. Then I do a wash with oil paint, and remove the excess with towels and turpentine, to finally seal everything with thin layers of gloss clear coat.

Then I added a foam dowel at the open part of the helmet, to be more comfortable when putting it on.

For the visor, I did a buck out of eva foam, vacuumformed it (first try yay!), tinted it with thin layers of silver spray paint, and, one of the things that Halo Infinite has and I absolutely love, are the weathered visors, it feels much more realistic, so I added some weathering with oil paints, then, glued the visor to the helmet with hot glue.

And that's it! the Helmet is (almost) done
Still gotta do the "headset" and of course, the cat ears (uwu)

I still don't know when I'll be able to continue working on this project, mostly because I have to focus on commissions and stuff, also, I'll be traveling to Europe in august, so that will be a month without updates (maybe I could manage to do the ears and headset before, but who knows).