European Regiment
Watching several threads i noticed that a part of the underarmor we constantly see in-game is rather less mentioned and discussed - the gloves. From what i have seen lurking around here most people go with Motorcycle/ Paintball Gloves or Tactical gloves they bought.
In general you don`t see the rest underneath the hand plates - a lot of folks seem to think so.
The few custom builts i`ve found are Uratz-Studios sculpts and Sean Bradleys
http://www.405th.com/f22/accurate-odst-gloves-18473/

I`m going for a more in-game accurate version here, specificaly the halo 5 variant.
There were some discussions on halo waypoint - some people hate the new look, some like`em - i think the detail put in by the artists is worth some credit. 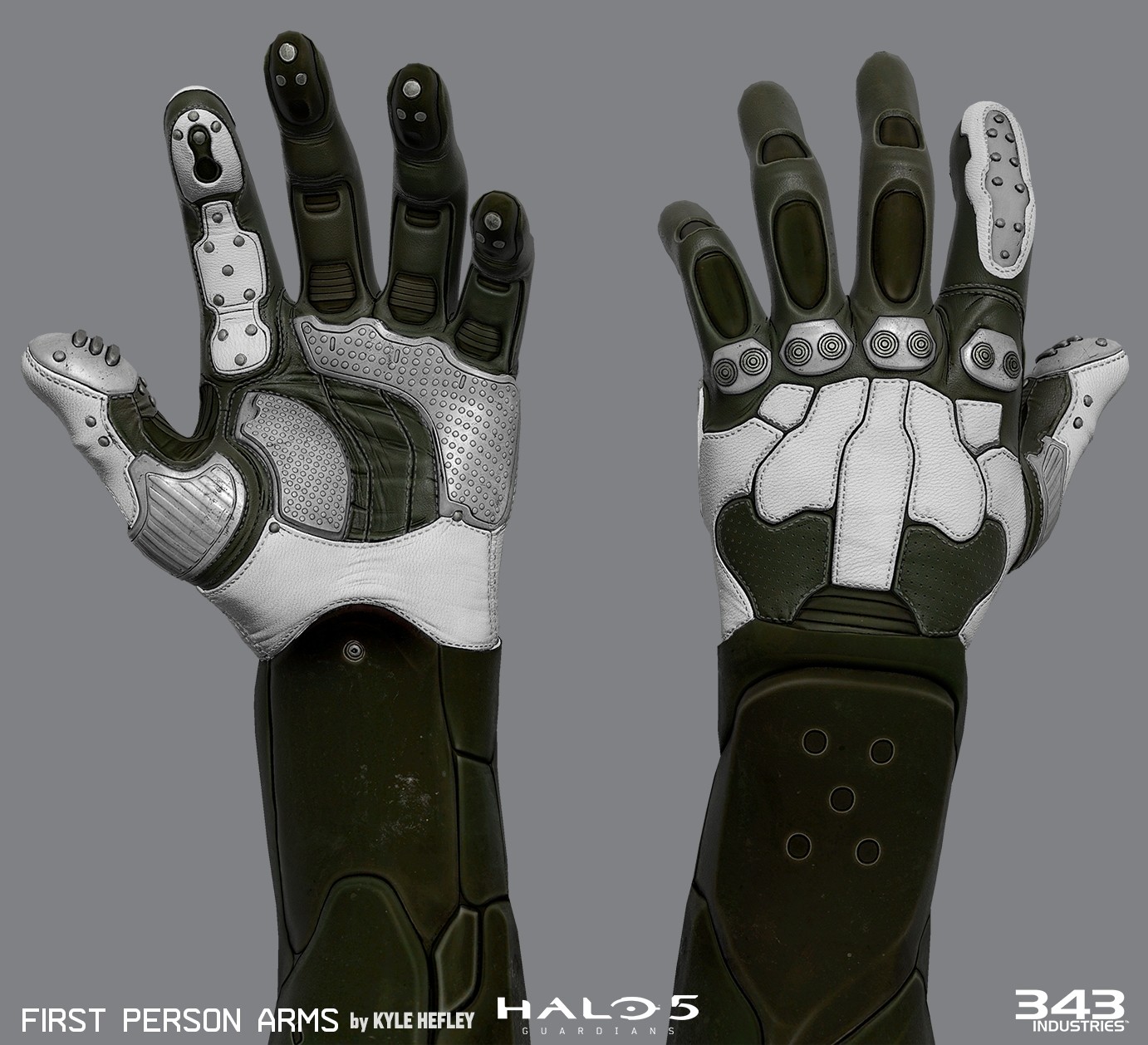 That`s pretty hard to replicate, i admit. That are about min. 3 layers which makes sense, MJOLNIR is considered to be ABC-weapon resistant and durable in vacuum. But i want atleast be able to grab a drink
The Results should go in this direction:

A simple black and 2 layers.
I made a quick sketch in CAD and it looks like this 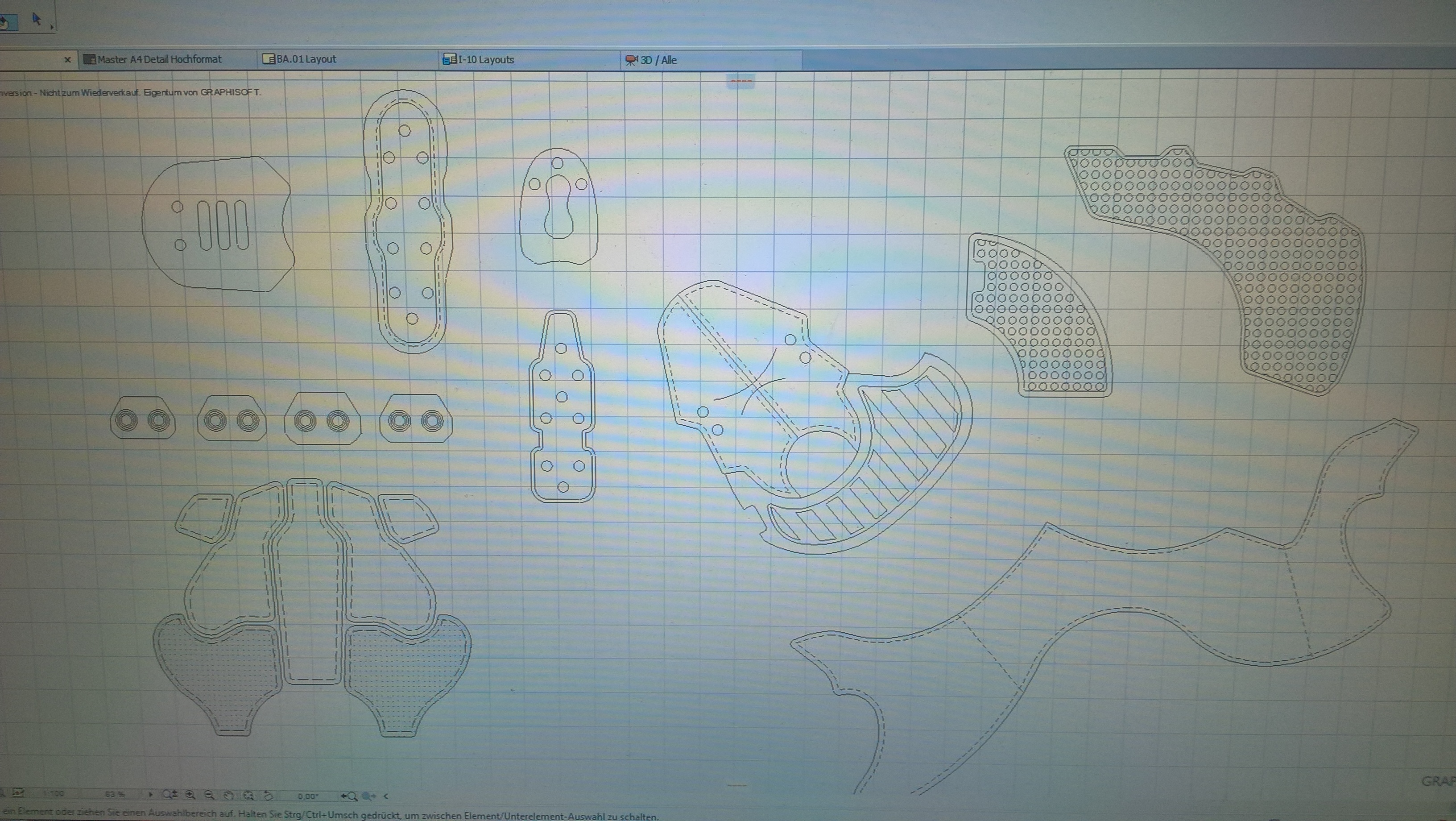 Then i cut out some rough templates and glued them on another glove just to see if it matches the proportions i have in mind:

Forgive me if it looks crappy, it was a rushed attempt

Now i`ll figure out what to adjust a little and start the actual built which should be sewed.
Afterwards i will upload the final templates here.

I want to add armor on top but i am not sure how to hold it in place whithout damaging the gloves (no glue)
If anyone has an idea, i would like to hear it!
I probably will use the 3d model of the MC hand by CarterBuilder12
Could also model different hand plates myself. Im furthermore willing to fulfil request from other members - but that`s a topic for another thread.

Pacific Regiment
Washington
Augh...I wish you had posted this like a month ago. Looks pretty fantastic! did you use foam or fabric? can you post the templates? I need to make a pair of my own for my MC suit.

Colonial Regiment
Very cool and nice work on the templates. you could sew on some Velcro to the top of the gloves or maybe rivet some snap buttons on to attach the armor.

European Regiment
It´s leather (1mm). Will post the templates in the next days.

SI3RRA 117 said:
you could sew on some Velcro to the top of the gloves or maybe rivet some snap buttons on to attach the armor.
Click to expand...

looking into it....seems to be a good product. Had similar thoughts about using snap buttons. Thanks for the Advise
Last edited: Mar 6, 2017

Division Staff
Colonial Regiment
Another option to hold armor to them would be small pockets inside the glove for small washers or metal plates that you would match magnets up to. 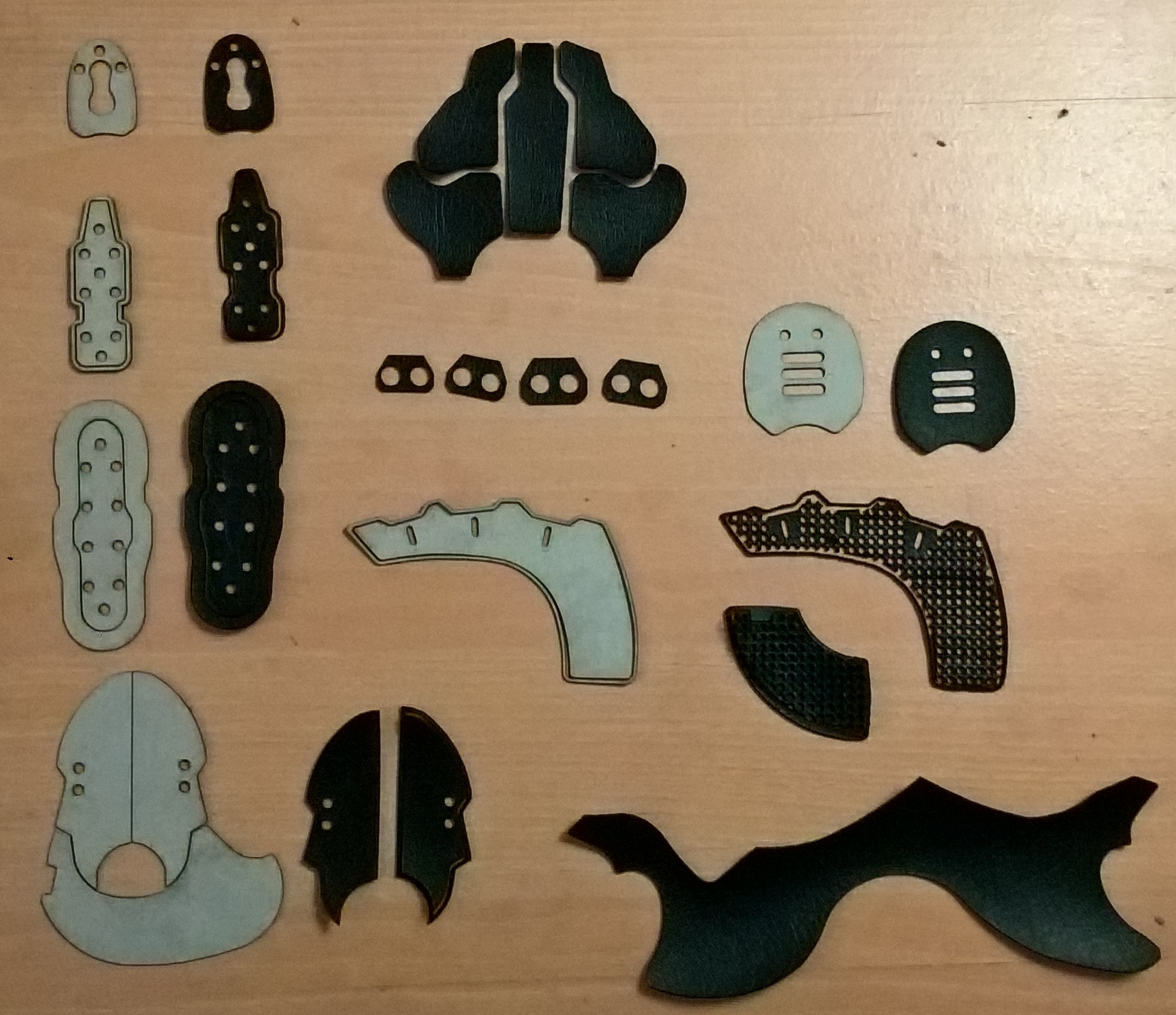 I used a lasercutter (epilog) to make the templates out of cardboard/ synthetic leather.
Now i`m going to assemble everything.

I feel a few commissions will be coming your way...but wow, those are spectacular! now you just need a base glove that looks like the
in-game ones!

are you planning on doing some stitching on the thumbs for some serious accuracy? That would be pretty papeesheewoosh!
nice papeesheewooshes you got there, and I hope to see more of your papeesheewoosh progress!

European Regiment
thanks a lot

Papeesheewoosh- \puh-pee-shee-woush\ Noun-
An object of good craftsmanship; one which has taken much sweat and coffee (and often paint) to create. commonly referring to Halo.
Click to expand...

hehehe, had to look that one up in your dictionary
i found simple black working gloves. i use 2 of them which will be put together.
Most of the parts are small and i think gluing is the way to go.
stitching? yeah, there are actually lines in the templates which indicate where to do that (screenshot in the first post)
still a prototype tho - there are a few things i want to improve next time.

hand plates are partially done and the rest should be printed soon.

Colonial Regiment
I wonder if you would be able to bring your laser cut parts and gloves to a seamstress and have them all sewn together. And for gloves I was thinking of getting these for myself Under Armour ColdGear Glove Liners - 592271, Gloves & Mittens at Sportsman's Guide
Just a suggestion

European Regiment
I appreciate your feedback guys. I will try out what you recommended.

Because one of my reference pictures included it:

I gave it a try and made the helioskrill hand plate for lolz....

This is an interesting project so far, looking forward to more updates. Best of luck!

Southern Regiment
Hey 8015. It's nice to see people producing some high-level work around here. Epilogs are pretty sweet, aren't they?

I think you may want to start with a much more fitted glove, maybe just spandex. I've lasercut a couple in the past when I couldn't find them in the material I wanted- just traced my hand, scanned it in, lasered parts, sewed it up and inverted it. Might have had to tweak the silhouette or offset a little? Some glove patterns for less flexible material have strips running down the sides of the fingers as well as the simpler front/back pieces which are basically a hand silhouette..

BTW this new design IS pretty terrible. It's basically a futuristic golf glove, with Borderlands-style cel shading to boot. Something more interesting might have been something based upon the original design principles of the Halo series - the angled planes for higher ballistic resistance, the sheen of physical vapor deposition layers over bright crystalline paintjobs, and the dark rubberized gel underlayers that comprise the bulk of the MJOLNIR armor's actual toughness..

European Regiment
Unfortunately i had to lay down work for a while - cut myself accidentally all along the left hand while working on better templates. Just a superficial wound, only tissue damaged, no big pain. - nonetheless a real bloody mess. Can`t do that much or it`ll open up again. All this years no problem - Well, first time for everything.
But as promised here the results of my 1st try for everybody.

I think you may want to start with a much more fitted glove, maybe just spandex. I've lasercut a couple in the past when I couldn't find them in the material I wanted- just traced my hand, scanned it in, lasered parts, sewed it up and inverted it
Click to expand...

Yeah, i will use that next time - do you mean a normal or a 3d scanner? can i rent that somewhere? My local fablab hasn`t one and the only 3dprint-shop in town is a bit to expensive though....

European Regiment
If anyone is interested in laser cutting - here`s the file i used. pm me if you need it in another format.

Ps.: The posted files are for the left hand (just mirror them)
Im not sure if that fits everbody, proportions may differ from yours so you may need to scale it!

Pacific Regiment
Those are amazing!!!! Do you have a it in a pep file? I would love to make some gloves that are accurate like those.

Do you have a it in a pep file?
Click to expand...

you mean as pdo. file? No, but pepakura shold be able to import obj. - this is what i linked in the first folder.
It`s not really a pep file - its flat, so already ,,unfolded"

ReClaimer8015 said:
you mean as pdo. file? No, but pepakura shold be able to import obj. - this is what i linked in the first folder.
It`s not really a pep file - its flat, so already ,,unfolded"

Than you, I will be definitely be using the file.

These are a huge help to me! Was trying desperately to find someone to commission for these but to no avail and I don't have the proper skillset myself to take it all upon myself. With these templates though I'm going to try a few modifications to the design and take a crack at them! Keep up the great work!
You must log in or register to reply here.
Share:
Facebook Twitter Reddit Pinterest Tumblr WhatsApp Email Link