Hi! My name is Leonidas. I started making armor back in February last year and finished my first full suit back in September. It was 3d printed using the awesome files created by MoeSizzlac and I felt like it turned out well considering it was my first build. But due to certain limitations of the model, numerous issues, and learning curve I was ultimately unsatisfied with it in the end.

I want to take it a step further and make something that's more my own. Using the the Halo 5 game mesh on the Armory uploaded by Art Andrews, I have done a full high-res conversion of the Halo 5: Guardians Mjolnir Mark IV armor for 3d printing and cosplay. I'm specifically using the female variant as the base because I feel like its better proportioned for the average body types and will allow for a more comfortable fit. After all, not everyone is built like Terry Crews. 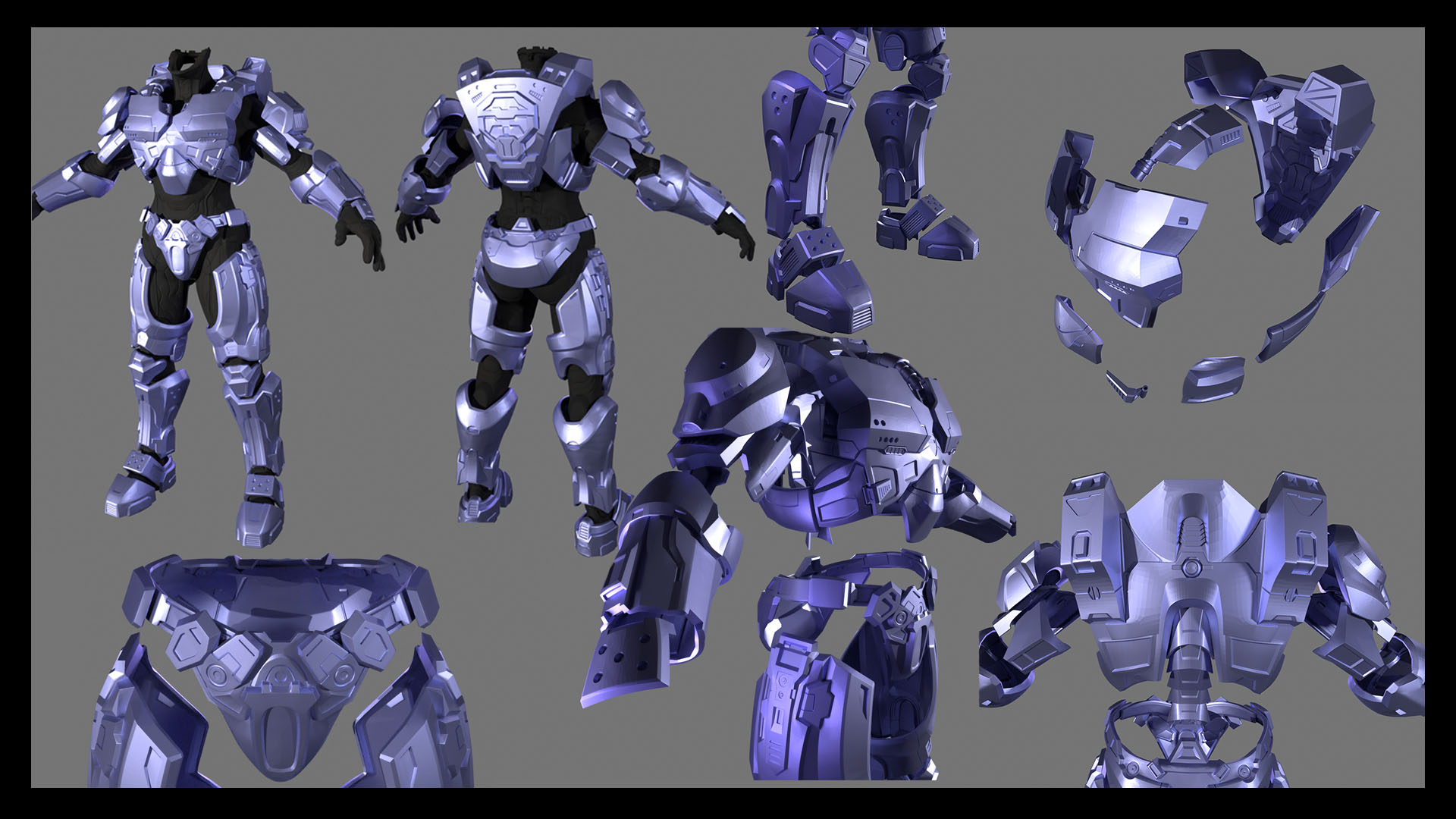 I have redesigned the torso to be modular and practical scaling and wearing. The back and front plating has been separated from the sides and shoulders so that they can be scaled independently, allowing users to scale the specific parts to better fit their own proportions instead of a global scale warping the whole model and save a lot of time and filament not having to reprinting the entire thing only to find out it doesn't fit. The independent pieces will allow for a better range of movement in the shoulders and sides. This will also let users mix and match chest and back plates while maintaining some cohesion. I have separated a panel on the back of the Calf plating as well so users can slip their foot through.
As an optional piece I have designed my own custom back plate based off of Chief's armor in the live action "Forward Unto dawn" series. this also includes spinal plating. 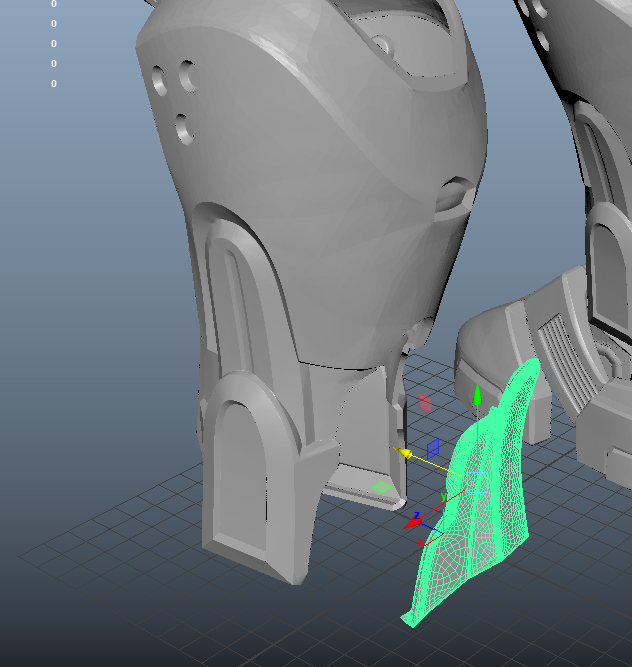 The model is finished for the most part but until I'm less poor I wont be able to do any test prints. I tried to to account for the thickness based on each part so some may be thicker than others but until I can do a test I can't be 100% sure of the thickness.

A couple of tips if anyone decides to print this:

Studying the original model I noticed that it was designed with a lot of thick padding in mind so each piece will be slightly large around the diameter of legs and arms so don't be afraid to really pad it if a piece feels a little big.

When scaling for the thigh keep in mind that you should be able to bend your leg at least 90 degrees at the hip, and 100 at the knee.

All "Detail" pieces are separated so that to make it easer overall to print.

A good way to test scale is to create primitive shapes such as rings and rectangles scaled to the length and diameter of the piece.

The 4 pieces that make the Side, work like an arm that wraps around and clamps to the front of the chest plate so each piece should be able to move as if they have a hinge between them. the "Clip" and adjacent side piece has a hole through it so you can put a long screw through. 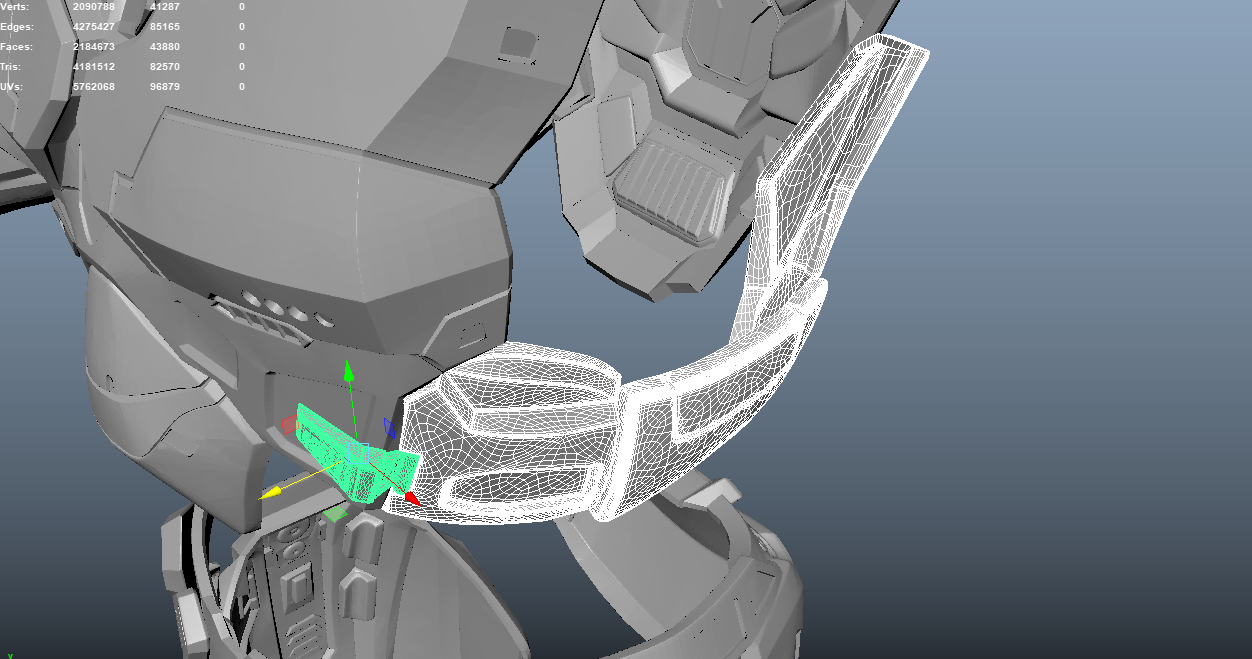 This is what I have so far, any advice or feedback will be most welcome. I won't actually be able to print anything until I become unpoor, so nothing is finalized and these files and project may be updated and revised as I go along.
Last edited: Jan 23, 2021

Love it! If you ever want other Halo 5 models to start from my archive has all of the Halo 5 armors ripped from the games and more

Jeffw773 said:
Love it! If you ever want other Halo 5 models to start from my archive has all of the Halo 5 armors ripped from the games and more

Awesome! Thanks for sharing, there are a few I wanted to do for mix and match reasons. Once I'm done working out the kinks for this set I totally do not mind doing any requests for specific armor parts or even a full suit if its really wanted.

Update 1/24/21: Reduced base scale on chest and back pieces by 10% this should allow arms to stretch forward more easily.

Looks like you and SpecOpsSpartan would get along VERY well given the context of your work. Well done though! I'd love to see some mobility even in the chest plate in reference to some of the Blur work done with the Mark IV armor. Seeing parts move is always such a treat. Plus I gotta say, its one of my favorite permutations to come from Halo 5 of the armor style.

NobleofDeath16 said:
Looks like you and SpecOpsSpartan would get along VERY well given the context of your work. Well done though! I'd love to see some mobility even in the chest plate in reference to some of the Blur work done with the Mark IV armor. Seeing parts move is always such a treat. Plus I gotta say, its one of my favorite permutations to come from Halo 5 of the armor style.
Click to expand...

Thanks! to kind give a little reference as to the change in scale. the old chest plate was a little over 14" across. which put the widest points directly in front of my shoulders. The new plate will be a little less that 13" (the silver bar) and is longer. Adding the difference in shape of the pectorals on the new armor and sits lower on the chest overall, this frees up the arms, more so for someone with broader shoulders.
I want to get as much movement out of the arms as I can while maintaining the the length and overall proportions with the rest of the armor.

So I thought I should probably show off my Old Armor at some point and as a reference for the difference from between the new one. I did a development diary on it anyone's interested. Its terrible, boring, and supper cringy so don't watch it.

I opted not to sand any of the pieces or add filler because after I started I was already making plans on the new set. This was more as a crash course in 3d printing for me rather than making a costume. 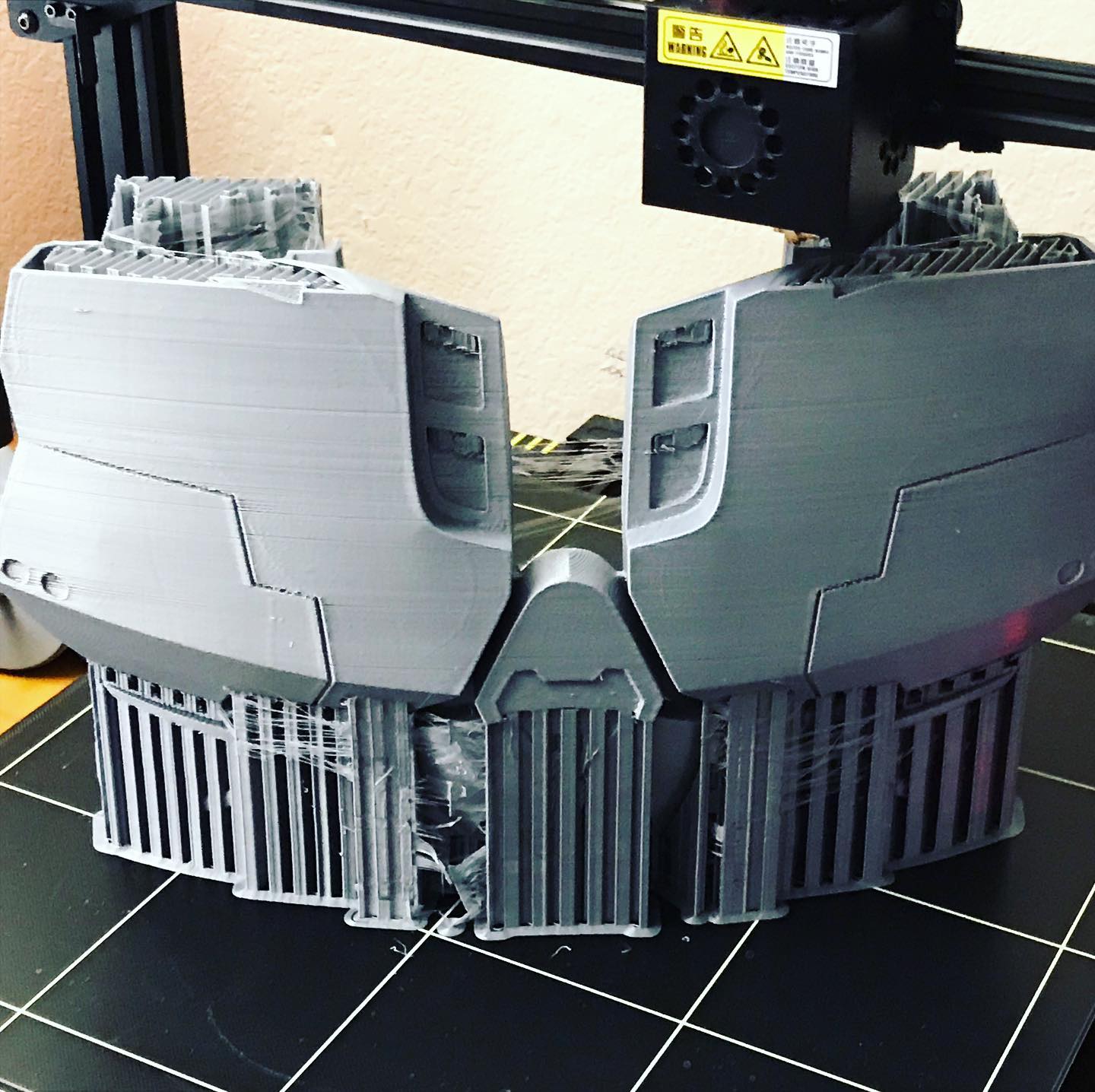 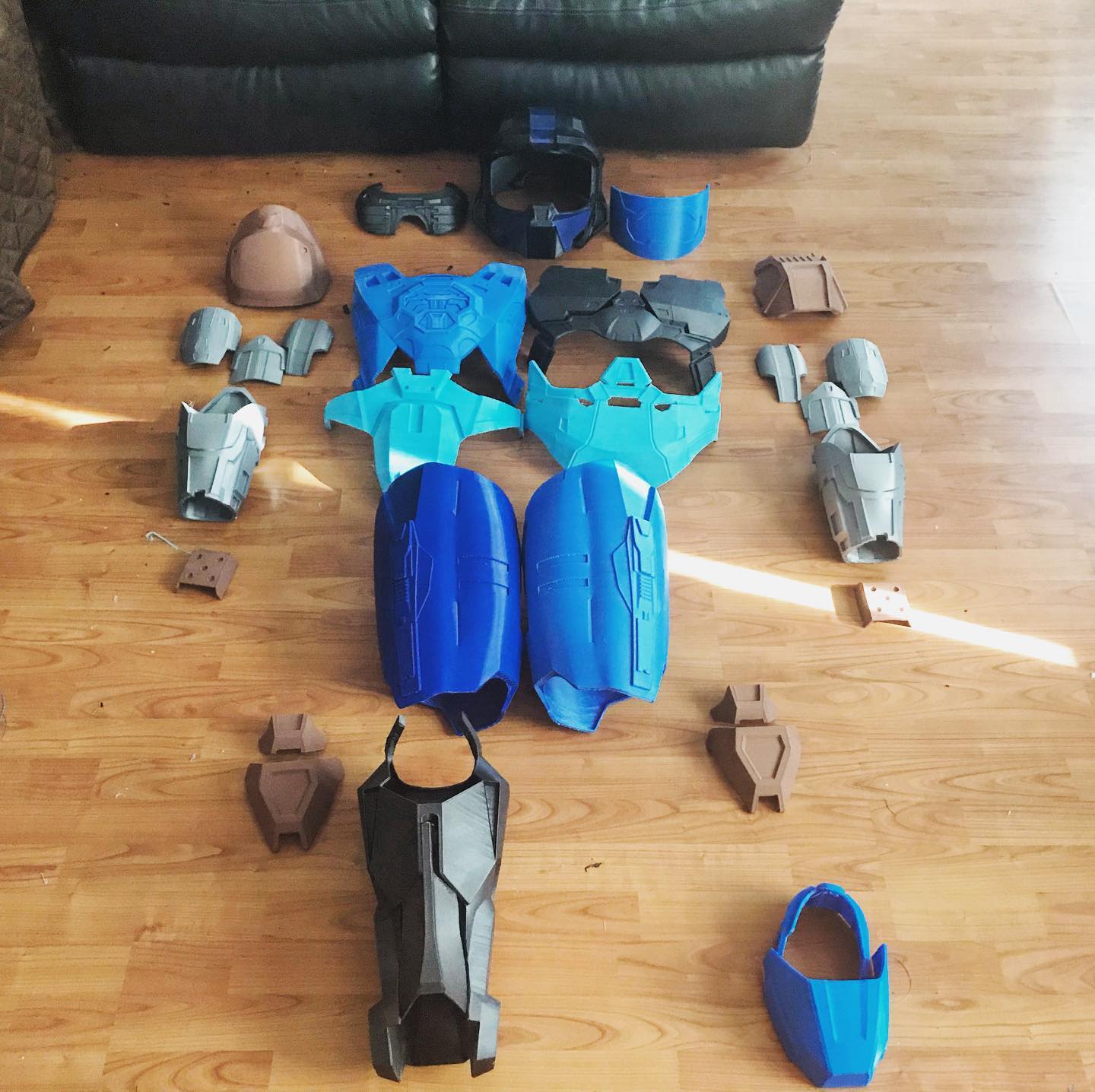 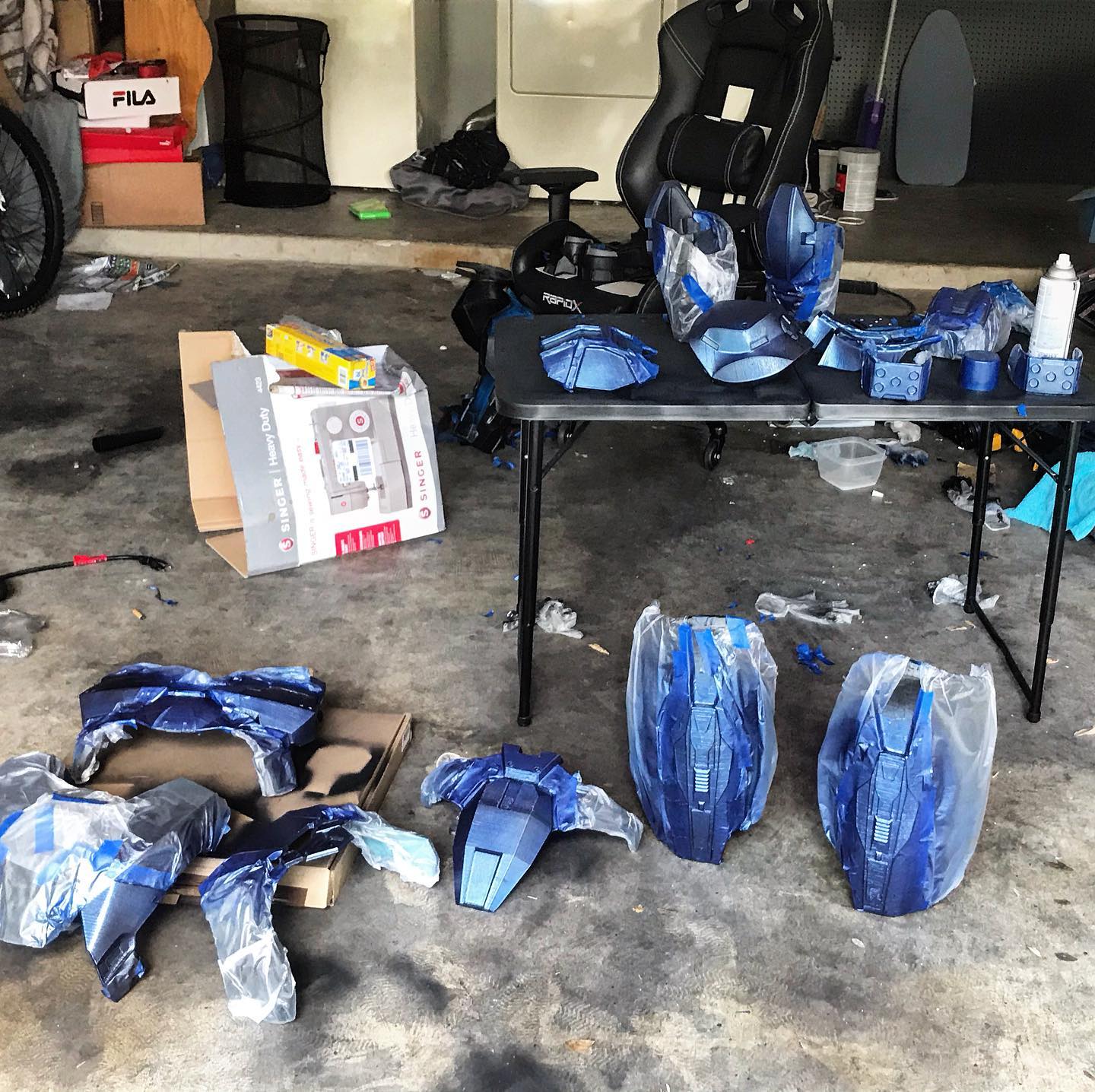 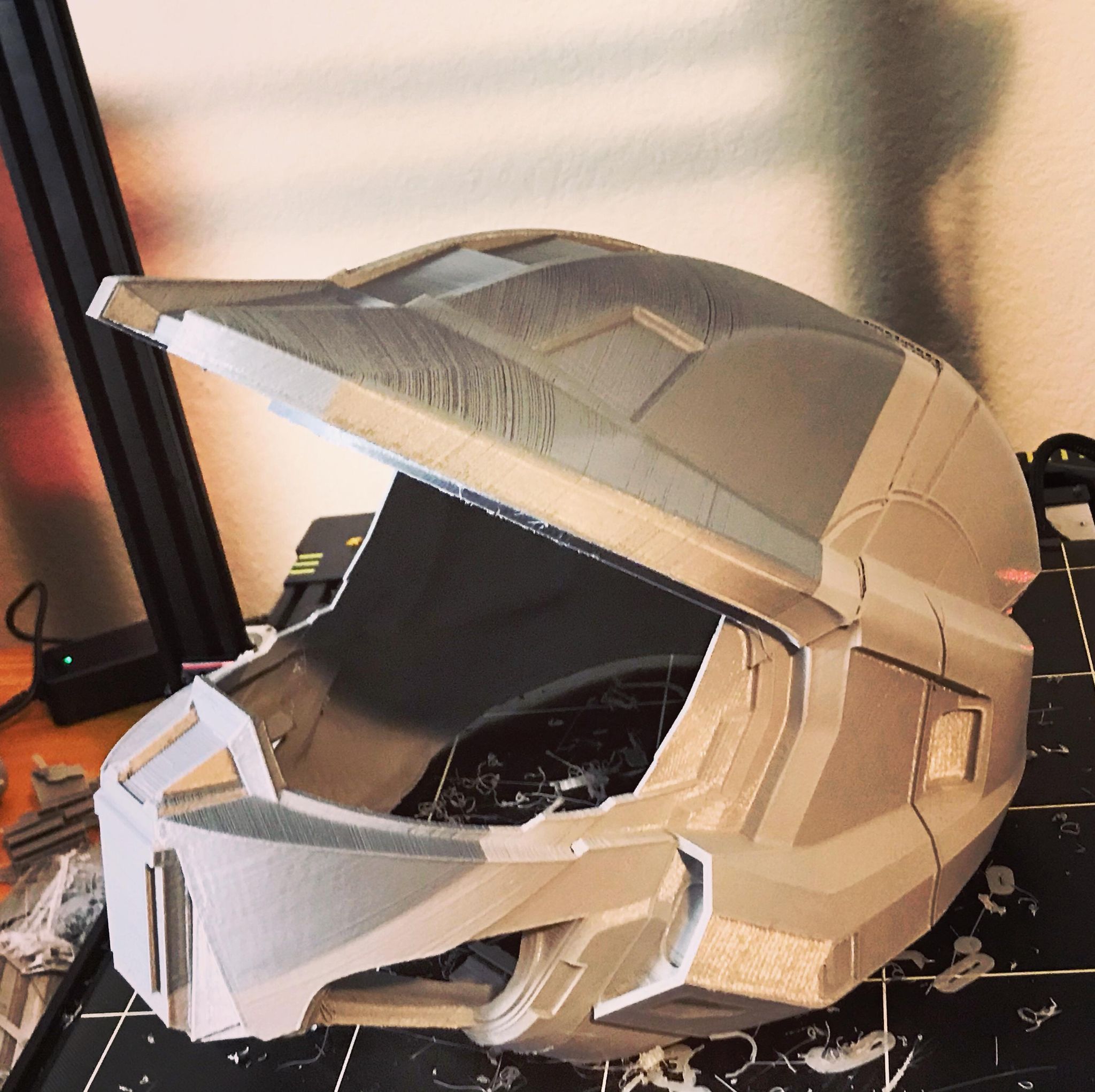 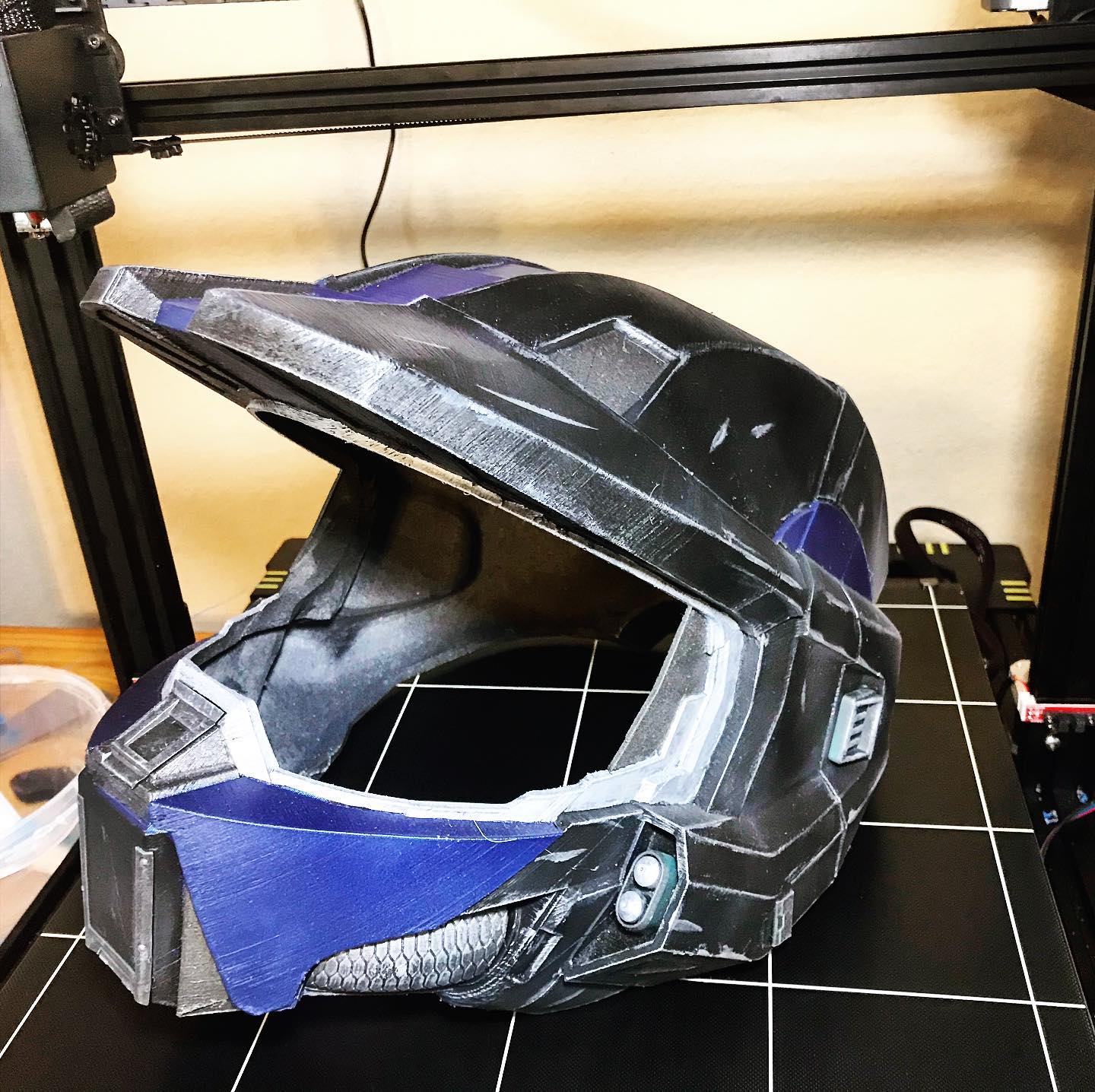 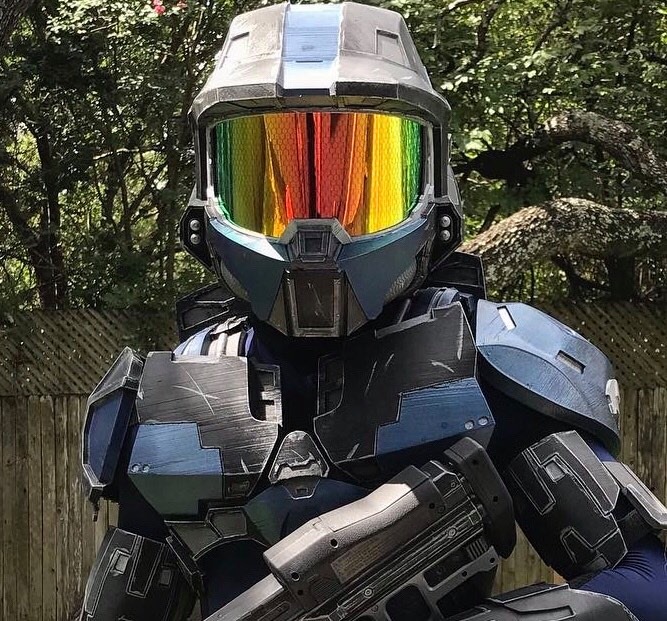 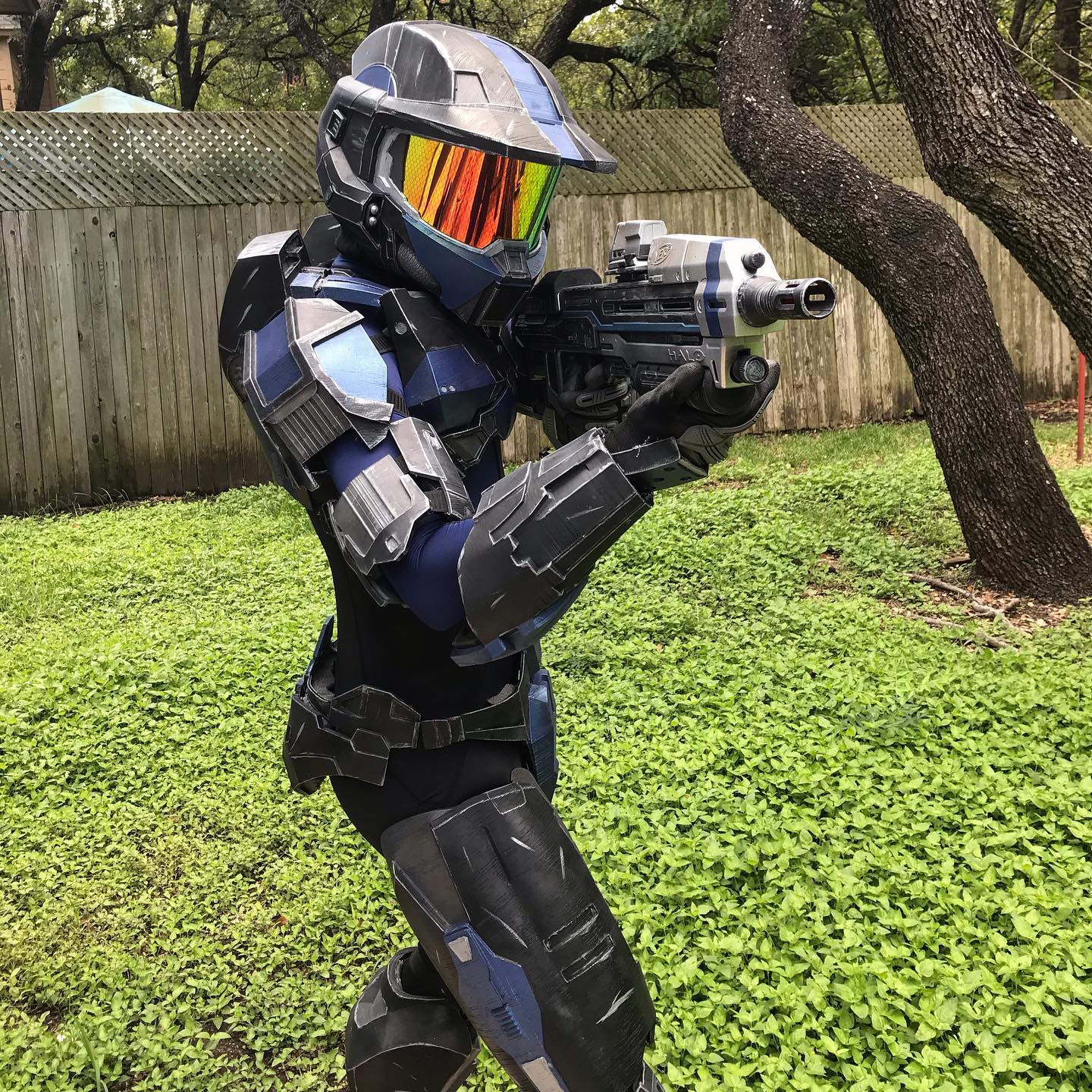 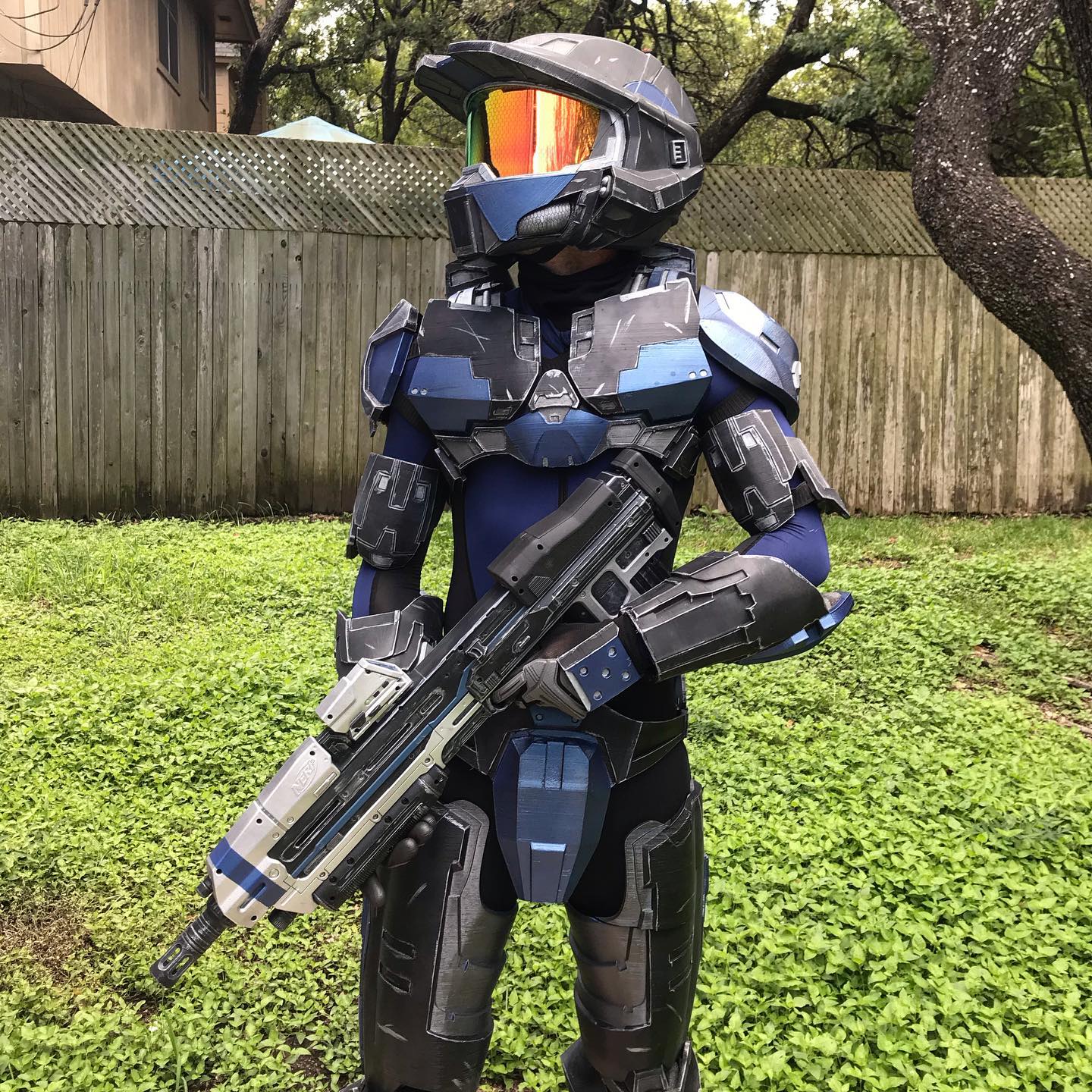 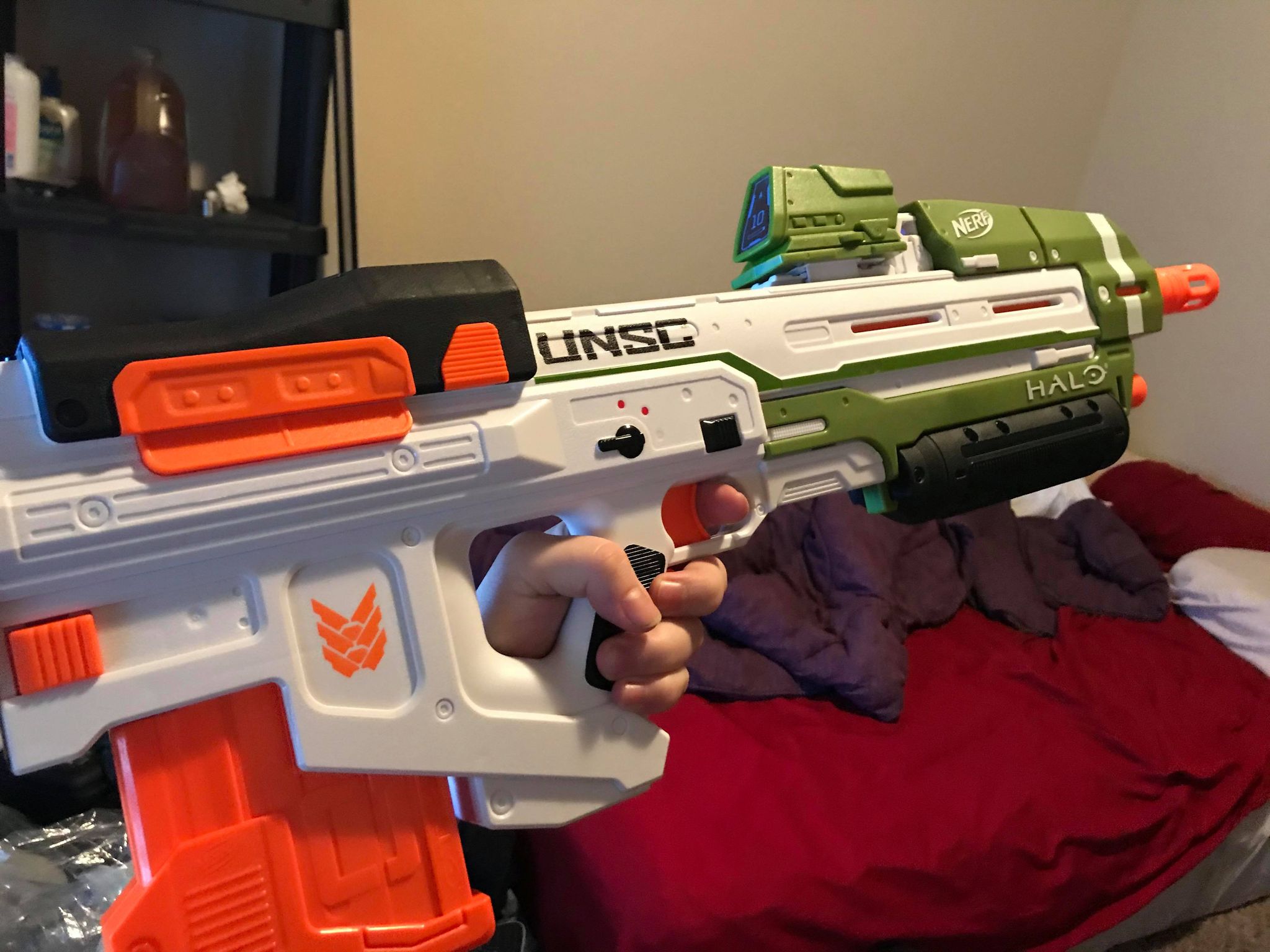 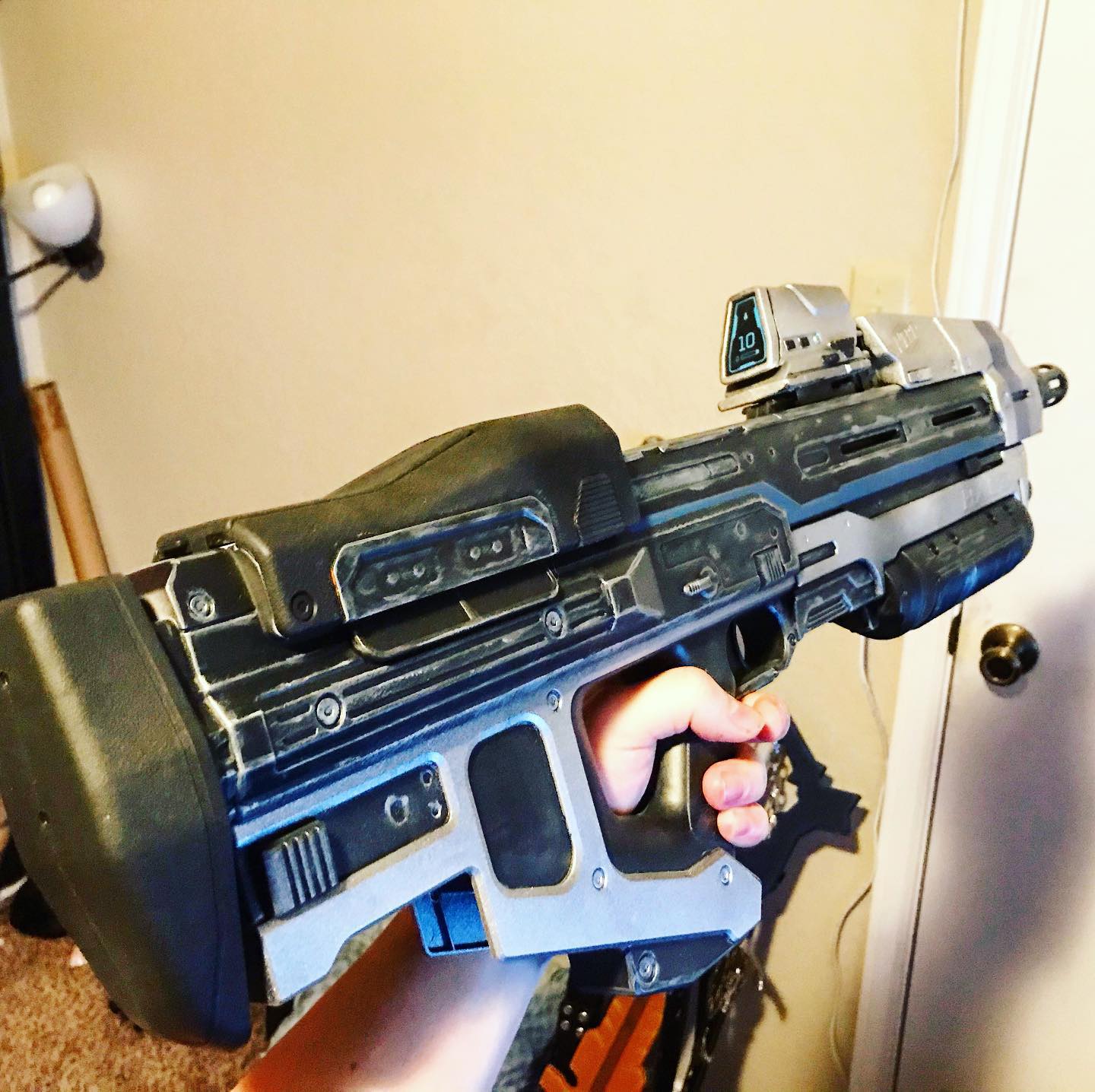 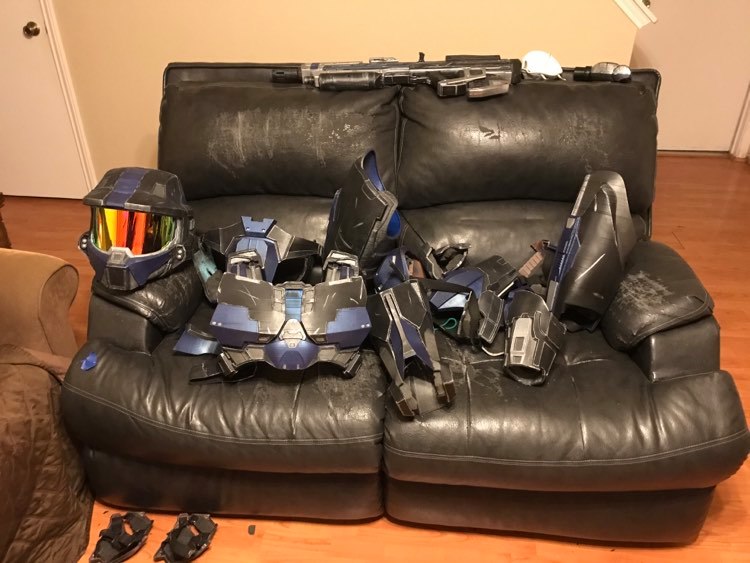 NobleofDeath16 said:
Looks like you and SpecOpsSpartan would get along VERY well given the context of your work. Well done though! I'd love to see some mobility even in the chest plate in reference to some of the Blur work done with the Mark IV armor. Seeing parts move is always such a treat. Plus I gotta say, its one of my favorite permutations to come from Halo 5 of the armor style.
Click to expand...

Nice job! I love the new Guardians conversion armor. I would like to see it when your done. Have Fun.

Since I'm starved for filament I decided to start work on the model for the Hellcat Armor set. I'll create a new thread for it when I have some more work to show, Right now I'm just breaking down the game mesh to see what I need to remodel and how I'm going to break it down for printing and construction.

Colonial Regiment
I love this, and one of the main reasons I purchased my 3D printer!

Colonial Regiment
Woah that armor looks great, the colors work so well together and the undersuit ties it all up. Great work!

So a lot has happened over the weekend. There was an accident and my grandmother died. I drove 2000 miles, a little over 30 hours in the last 3 days. I plan on taking some time off away from working on armors and such, I still plan on making more models just not right. in addition to the emotional strain, the trip hit me pretty big financially. I was already scraping by to begin with so I need time to figure out how I'm going to deal with that.

Before I left, a awesome friend bought me a wheel of filament and I was able to start a print of the chest plate. I've started using the Prusaslicer instead of Cura and I got massively better results from the print of my last armor with basically the same settings so I recommend you guys check it out. I did have some issues as you can see in the middle of the piece towards the top, but I believe it was an issue I was having directly related to my printer. 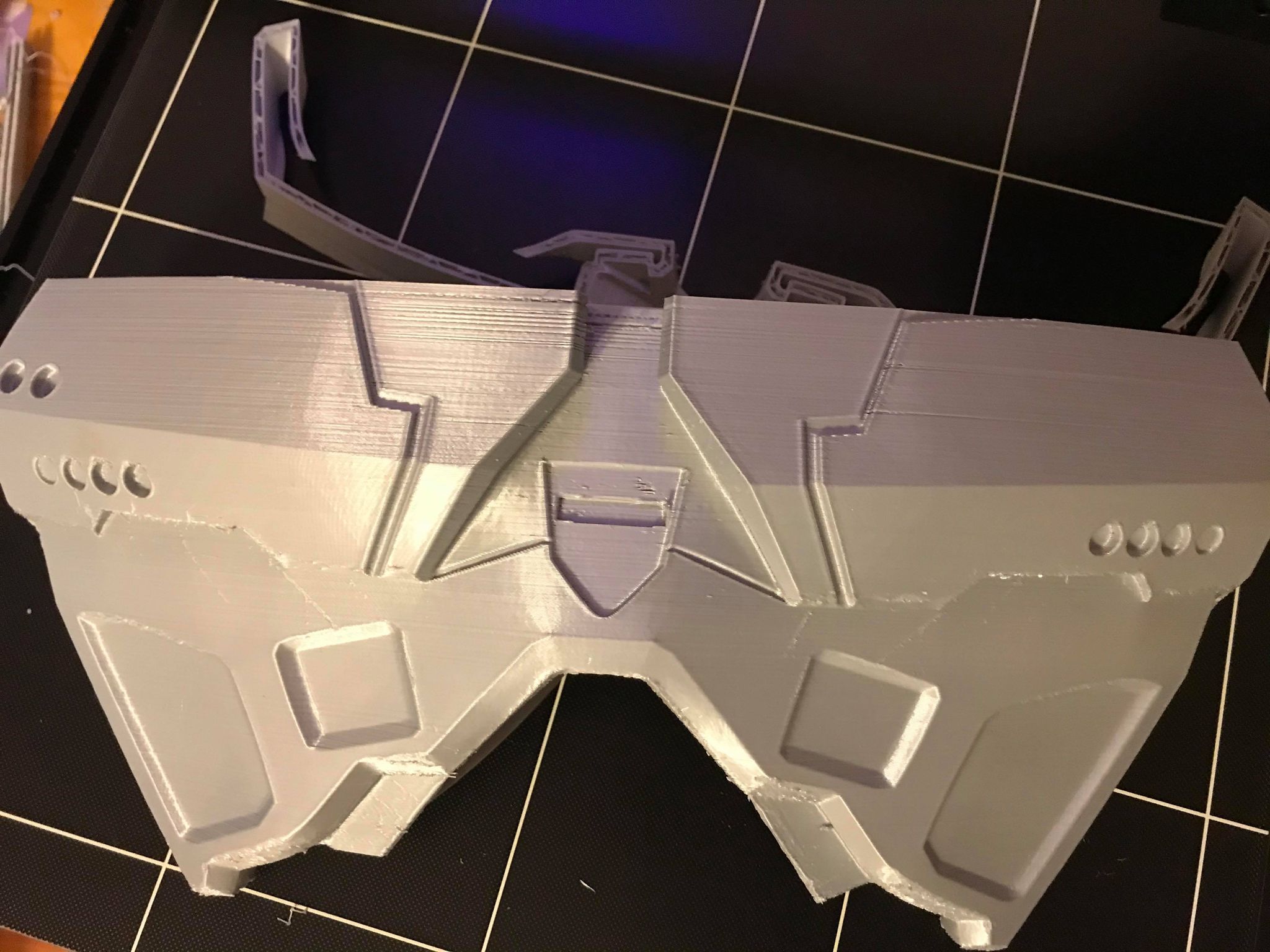 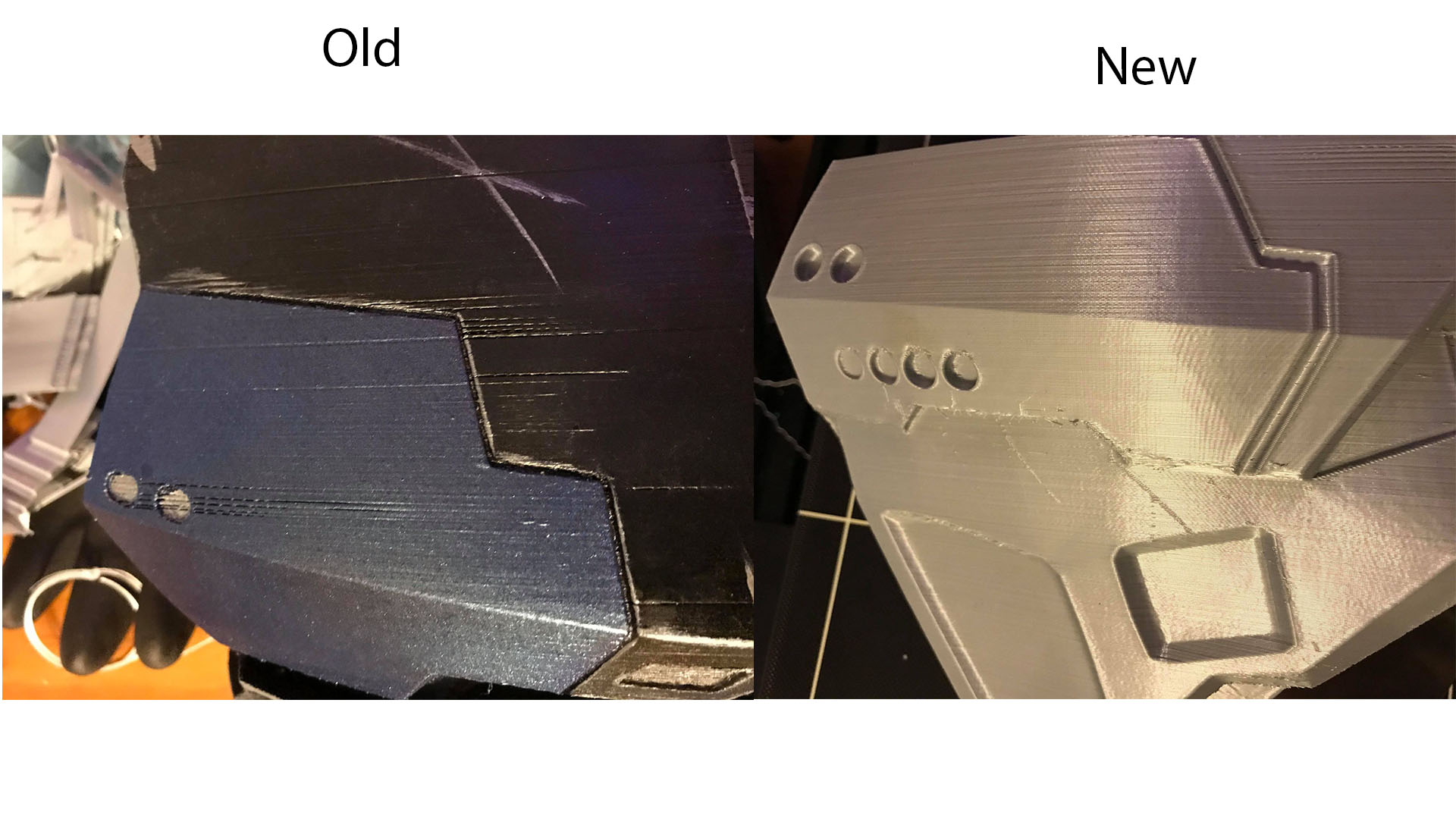 As you can see though the plate never finished printing. For some reason it stopped printing, the bed and hotend were cold but it was still the system still said it was in progress. I restarted the machine and tried to print again before I left on my trip and everything was working fine until I came home to this error. Printer and bed were still hot but wasn't moving. I don't know what's going on, I haven't tried any troubshooting yet as I'm too exhausted right now. If anyone has any ideas please let me know. 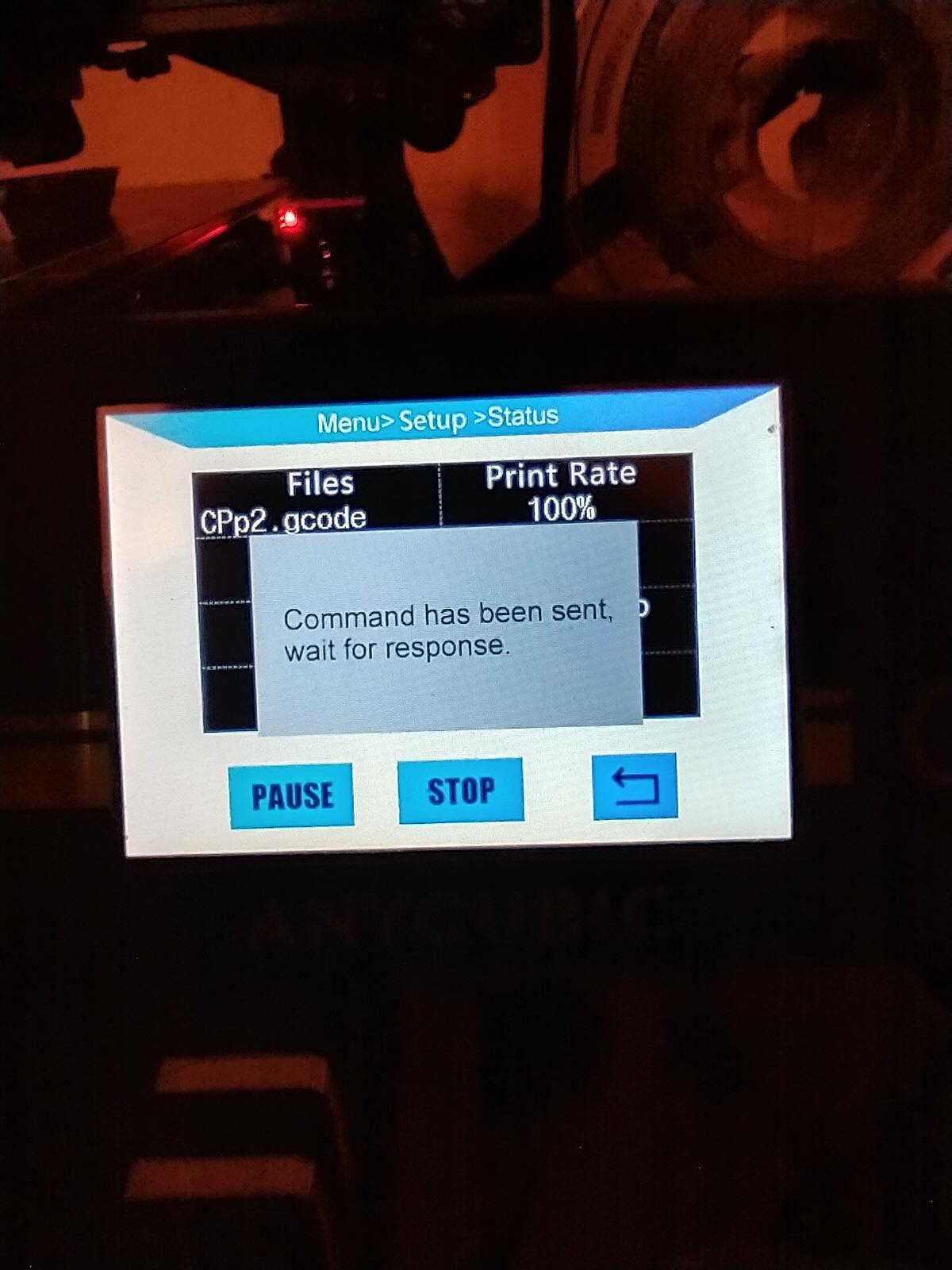 So I found out that the issue I was having was caused by a line in my G-code that was not recognized by my printer. It is now working as it should and I was able to finish printing the chest plate. until I get some epoxy and spot putty, I'm just using hot glue to hold it together. since the side pieces and ab piece make up the whole chest plate it's difficult to tell exactly how big it will be with just the main plating but it will be considerably larger than the old armor. 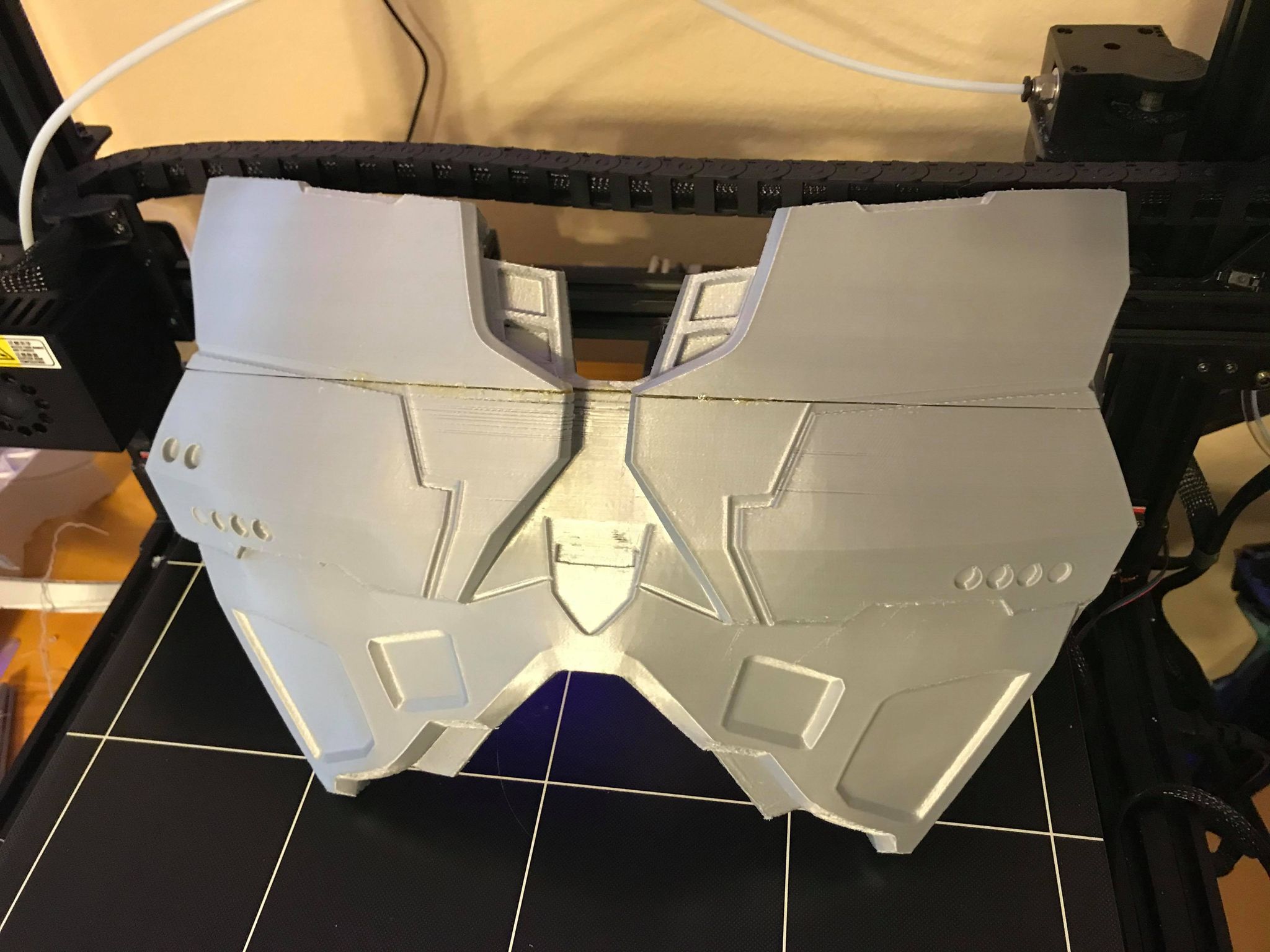 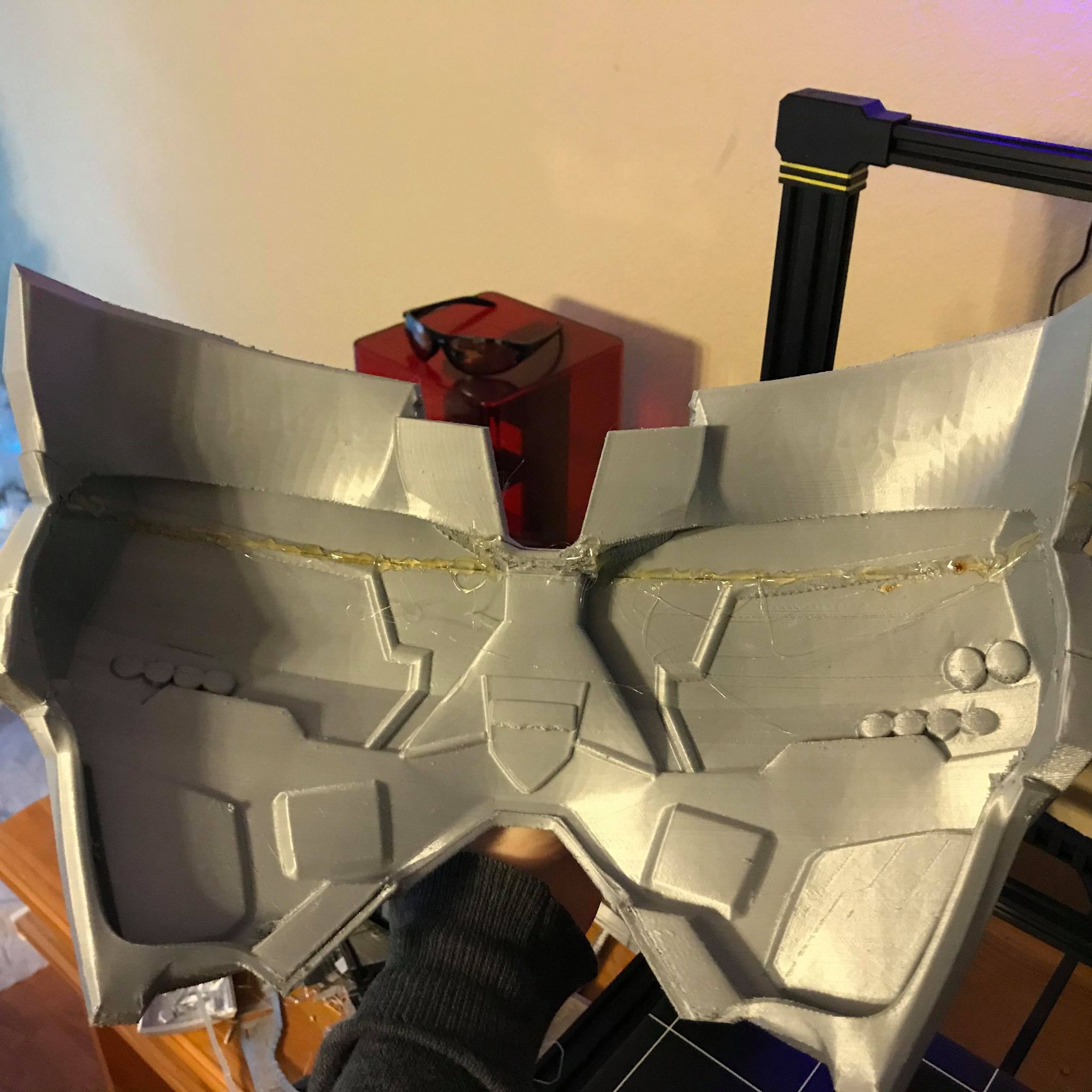 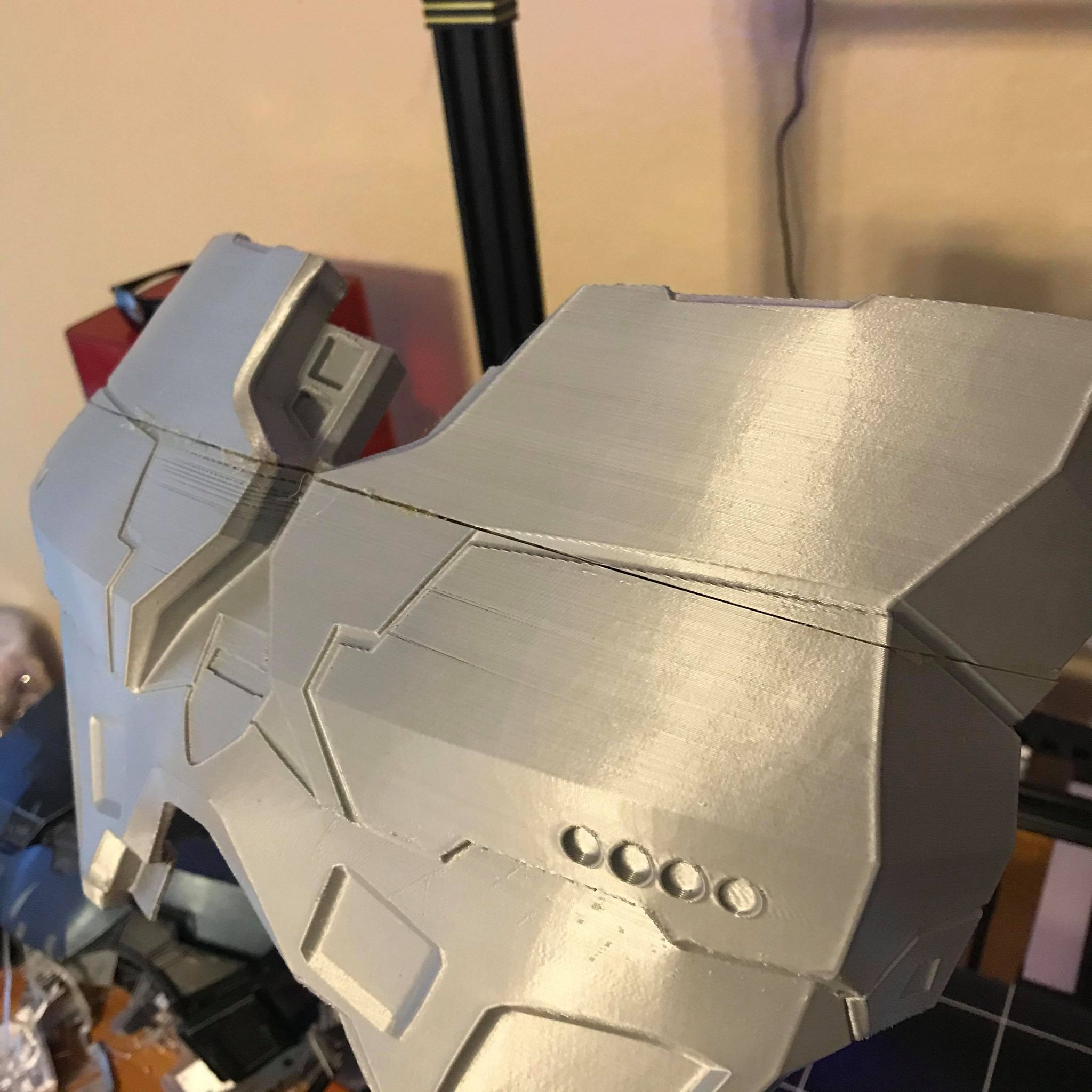 Australian Regiment
That's so strange... did you manage to figure out what it was in the Gcode that was the issue? Was it a certain setting? Or maybe a bad export?

PlanetAlexander said:
That's so strange... did you manage to figure out what it was in the Gcode that was the issue? Was it a certain setting? Or maybe a bad export?
Click to expand...

This was the old Gcode. it was either of these lines (red). I'm not savvy when it comes to coding and such so I'm not sure, but after removing these 2 lines the issue was resolved.