Hey folks! I've had some progress for a while but I finally decided to make an account. I was slightly intimidated by the amount of forum activity that seemed to be expected of members. I'm terrible at keeping up with forums and even worse at WIP threads. Between a terrible attention span and the drive to just get things done... well, you get the point- haha. At any rate, I've got a decent outline for what I want to do with this kit. As the title states I'm doing an ODST kit that is majority H3 styled, with some minor differences. I loved Sean Bradley's kits but I felt that I'd have more fun-and learning-doing it myself out of foam. I've only made one foam kit before and that was an N7 from Mass Effect over 7 years ago. I will be outlining the differences in this ODST kit further along.

Here is my overall design- it's artwork I made of my Halo OC for writing purposes. For the most part this is an alternative outfit- I won't be having a DMR with copper plating and I'm not completely sold on the shemagh for this cosplay. I was simply doing a 3D render of a pixel art concept a friend did for me.

Moving on, here is the progress I have so far. I followed Andrew DFT's tutorials on Youtube, only realizing after the fact that some things in his construction process were not screen accurate. That is in no way meant to bash his work- I adore these tutorials and am very grateful for them. That said, I'm not too miffed about the changes. Now, where the differences in the H3 style come in are on the chest armor/carrier. I'm honestly going with the Reach style chest armor since it's easier for me to build (I didn't want to deal with the odd inward curves on the back armor tbh-phew!) With that, everything else will be intended to be built in the style of H3.

Now, the chest armor is in no way done yet. I still have to make the center and ablative lower chest pieces that go under the main plate, as seen on the H3 armor. I also have to make the carrier buckles/straps which I will be doing out of ABS plastic and using nylon for the strapping. I will also be adding the white or grey UNSC text and logo to the blue ablative piece. I am also going to make up a UNSC med Ref image as seen on the canon characters in H3:ODST to print onto the left shoulder plate.

As for other things to do for the upper body armor, I would like to make the 'undersuit vest' so as to not have the armor look like it's just been slapped onto a pair of BDUs. It's difficult to see what the pattern is on the front/stomach area but the back is fairly easy to make out. I suppose the front won't matter too much since it will be covered up but I will do some more digging to see what others do for that. The sleeves are something I wanted to do as well-I'm thinking either pleather or neoprene. Leaning towards the latter since it has a more desirable texture.

Moving on for now, I also acquired a second hand MA5(b?) about a year ago. It was made from wood afaik and was fairly decent. Unfortunately it had a rushed paint job and a nasty crack along the top so I've finally gotten around to repairing it. Just going to do a standard paint job as seen in the games- that's currently a WIP.

I also have a friend 3D printing me one of these babies!(drool)
Imgur

As a whole, I'll be working my way top to bottom with the kit, though I'll probably just focus on the armor itself first and do any soft parts such as the vest/sleeves last. ( I need to get my sewing machine repaired unfortunately.)

Aaaaand that's it for now!

It has certainly been quite a while. Sadly the past year has been rough and I wasn't able to continue working on this kit. Hopefully this is okay as a necro post; I tried to check the forum rules and it seemed like as long as it's my thread with new info it should be okay (i hope!) TL;DR I made a promise to a friend to complete in (hopefully within the next five months) so I've finally started back up on this. Current progress is as follows: 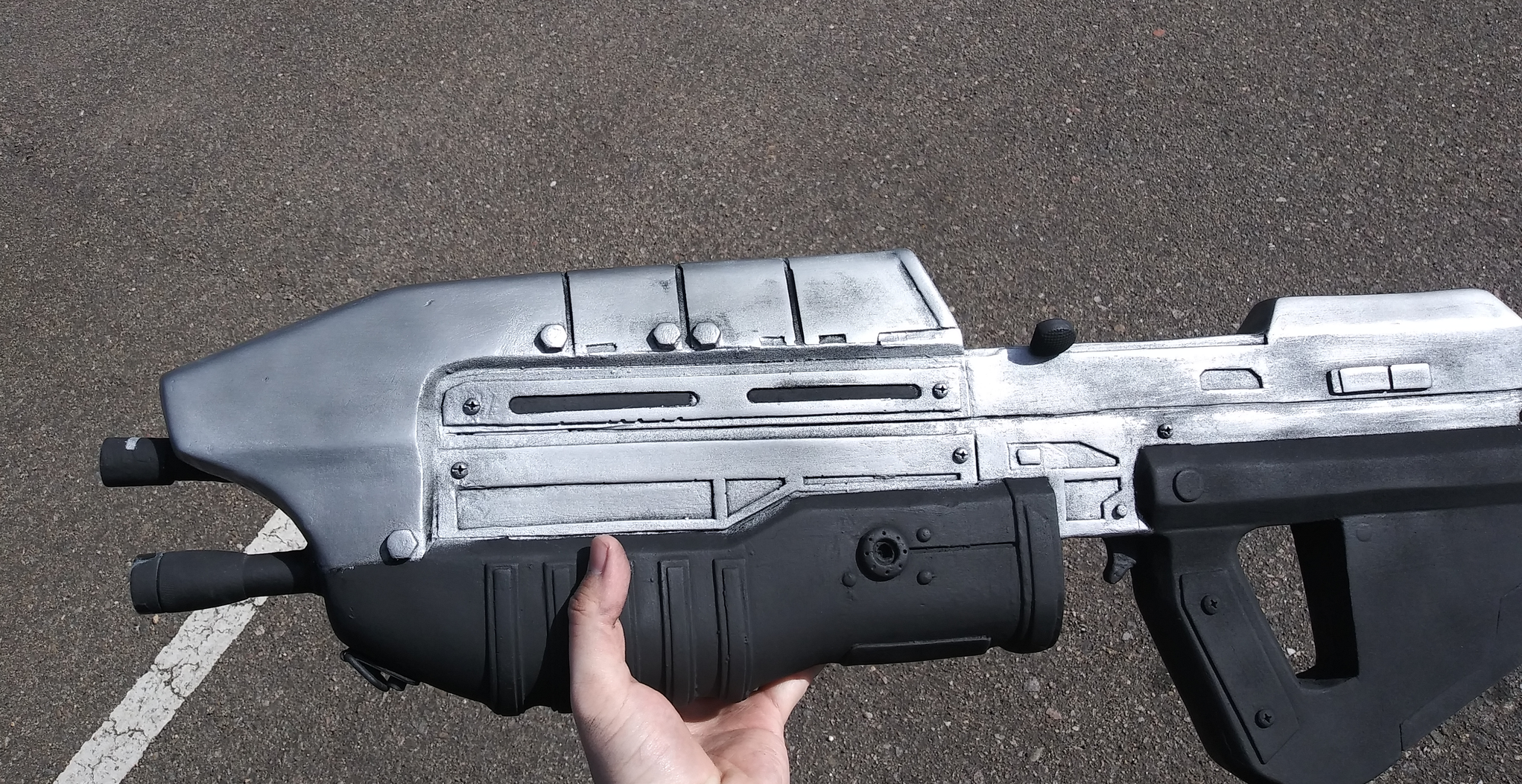 Next up is the left gauntlet (unpainted). I followed the Andrew DFT tutorial but modified it to be more screen accurate which entailed shifting the placement of some details and adding some that were left out entirely. This first attempt was a bit rough and had quite a bit of trial and error. Sadly I could not keep it as a full closure gaunt to remain 100% screen accurate so I opted to leave a seam with elastic on the inside to keep it together. Hard to see in these pics but it fits rather snugly over my BDUs. There are some remaining pen lines from first attempts so if those don't come out after plastidip/primer then I may start over. Right gauntlet in the works currently. 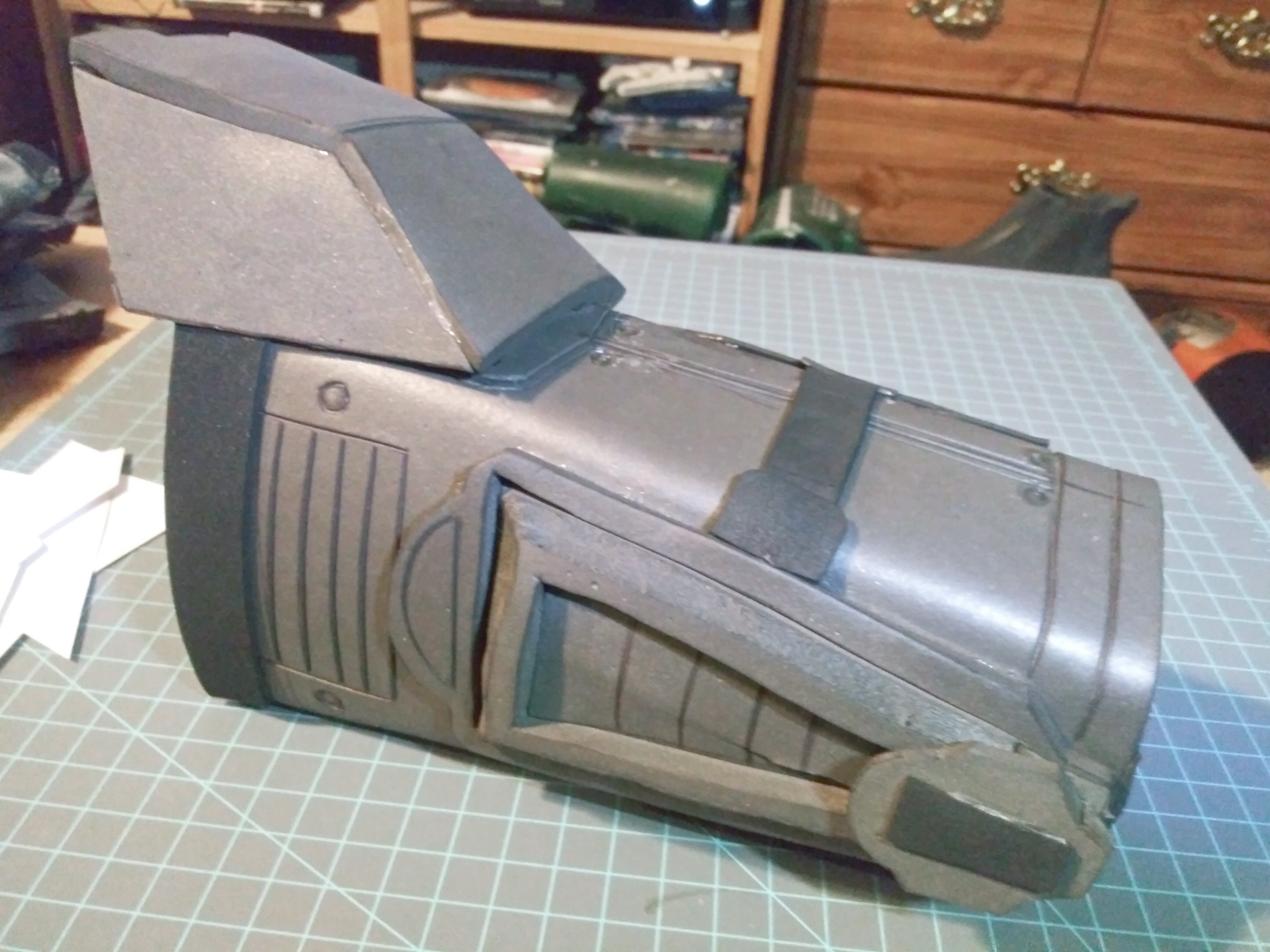 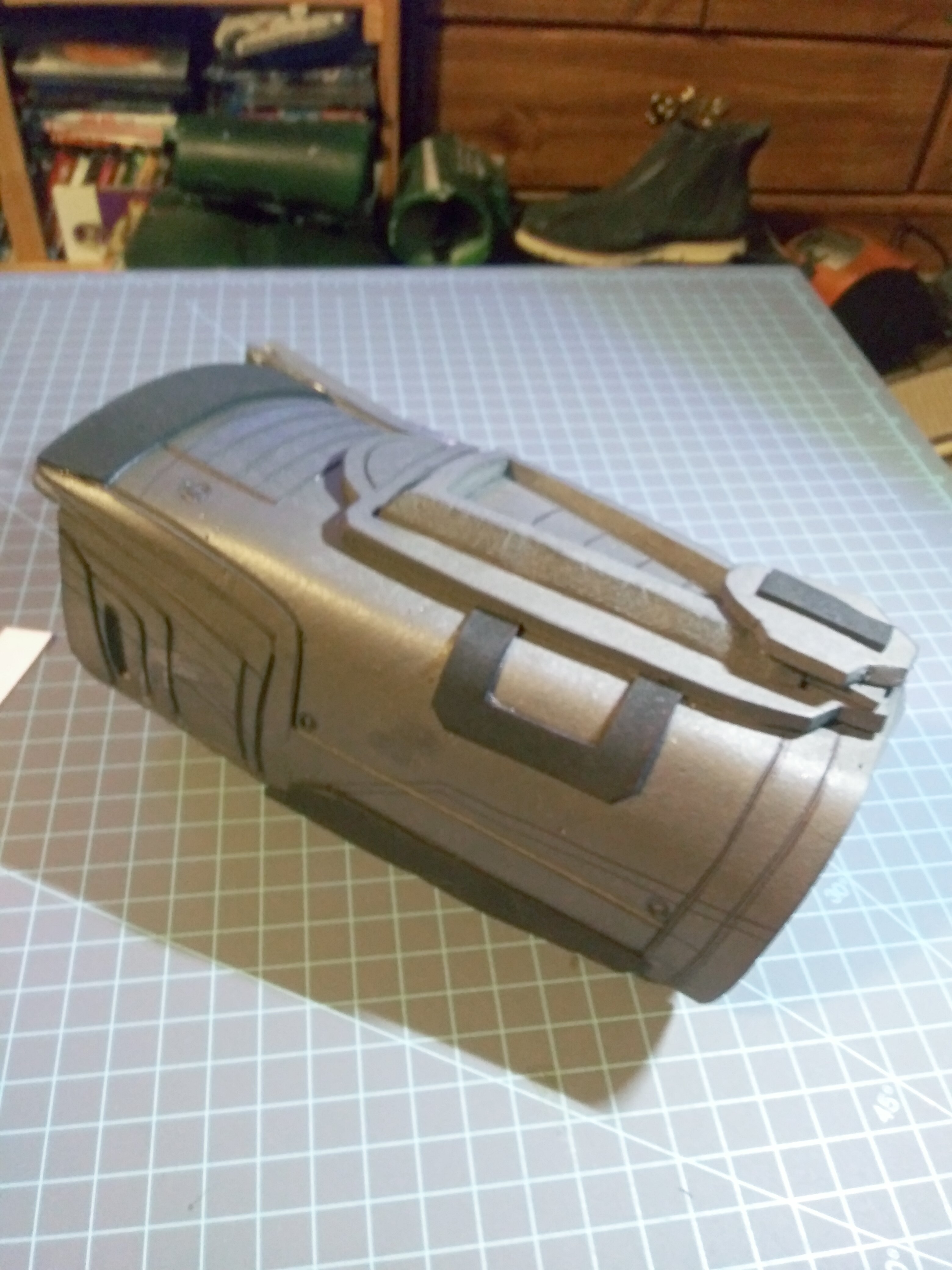 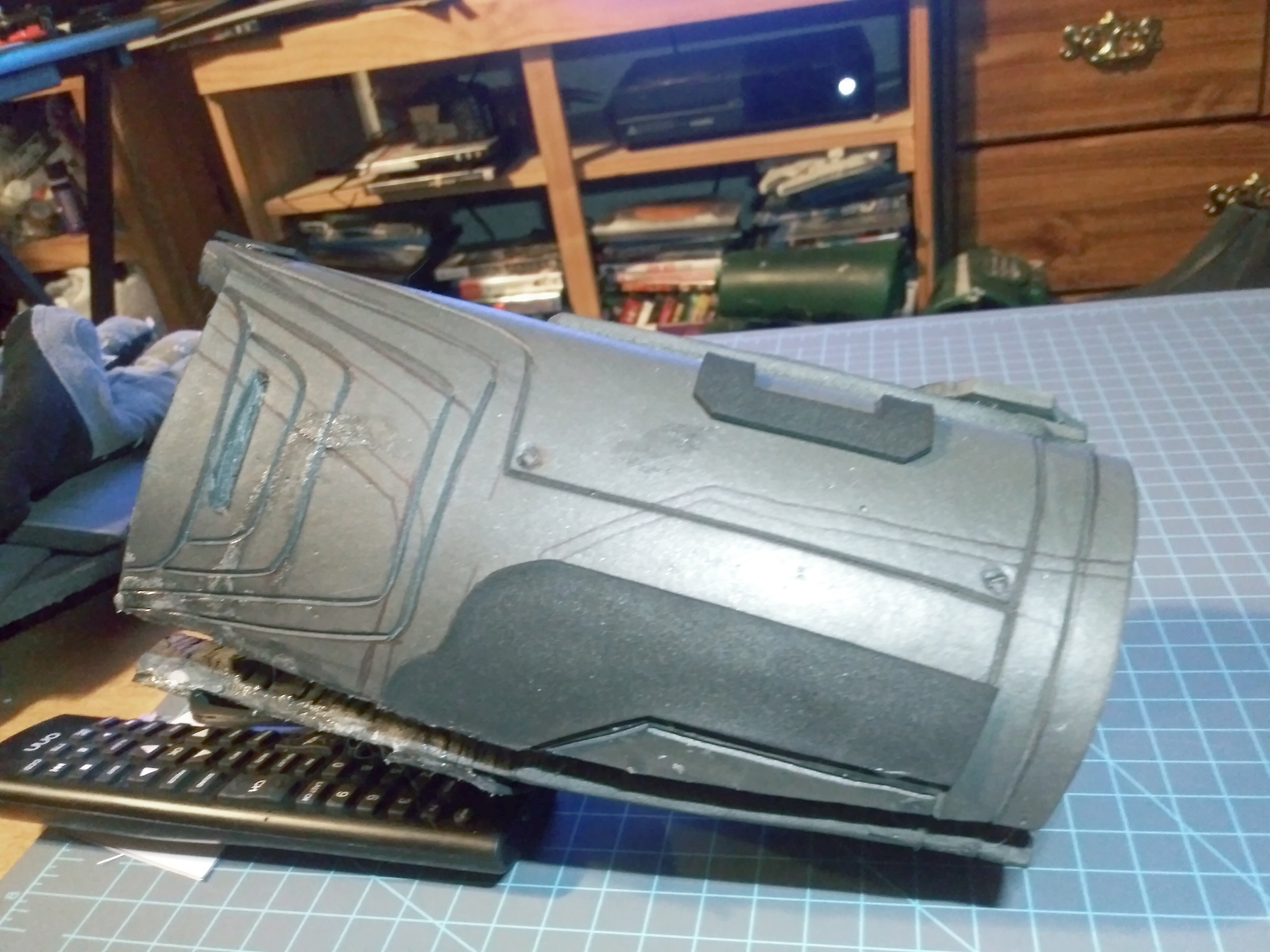 I also have the cuirass buckles in WIP, cut from ABS plastic. No pictures yet but I intend to also work on the cuirass again here soon and get the UNSC lettering painted on as well.

Small-ish update! Both gauntlets are constructed as well as the belly ablative gear! Attached are some better pics of the seams I had to leave on the bottom of the gaunts. It doesn't look terrible but the perfectionist in my heart will know. I was initially very skeptical of how the chest gear would look made from foam but by using Pep templates I was able to get the general shapes I needed. I'm actually really happy with how this turned out! I used some spare duckcloth to wrap the foam in. The Rookie guide says it's faux leather but it looks exactly like canvas so that's what I went with. Won't be able to plastidip/paint for a few days since it's snowy here though. That's all for now! Bonus pic with some Moa burger pringles haha. 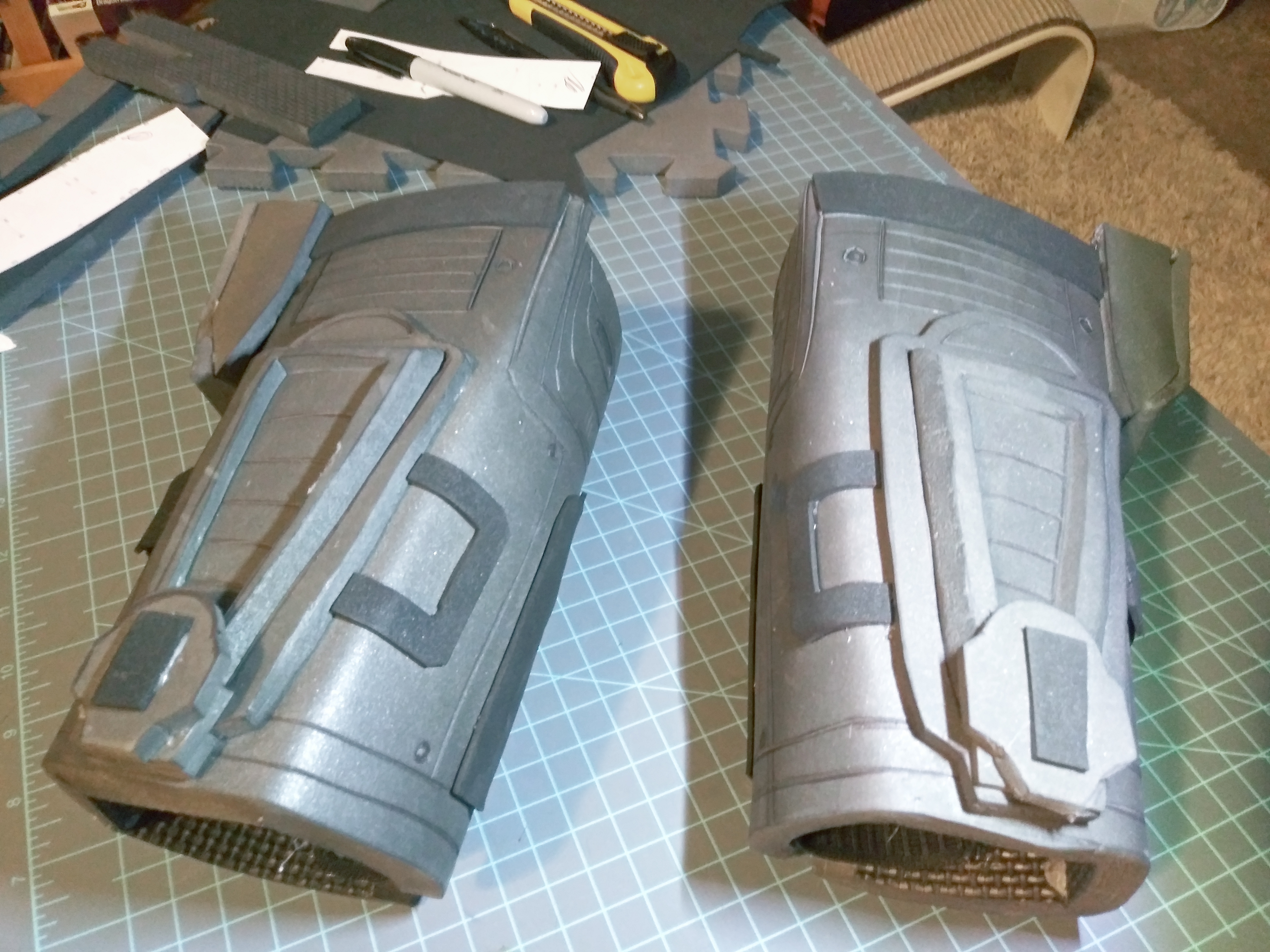 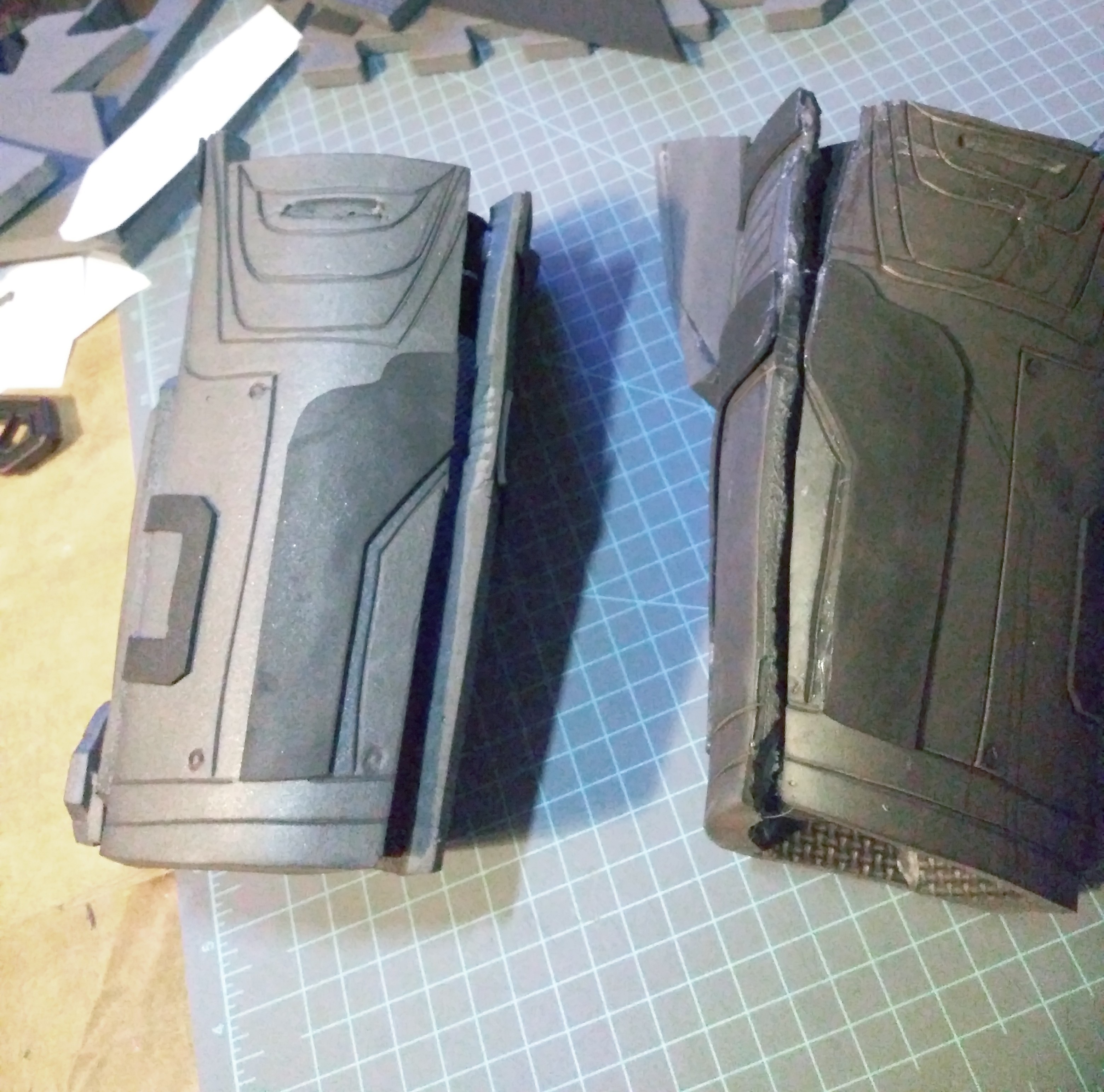 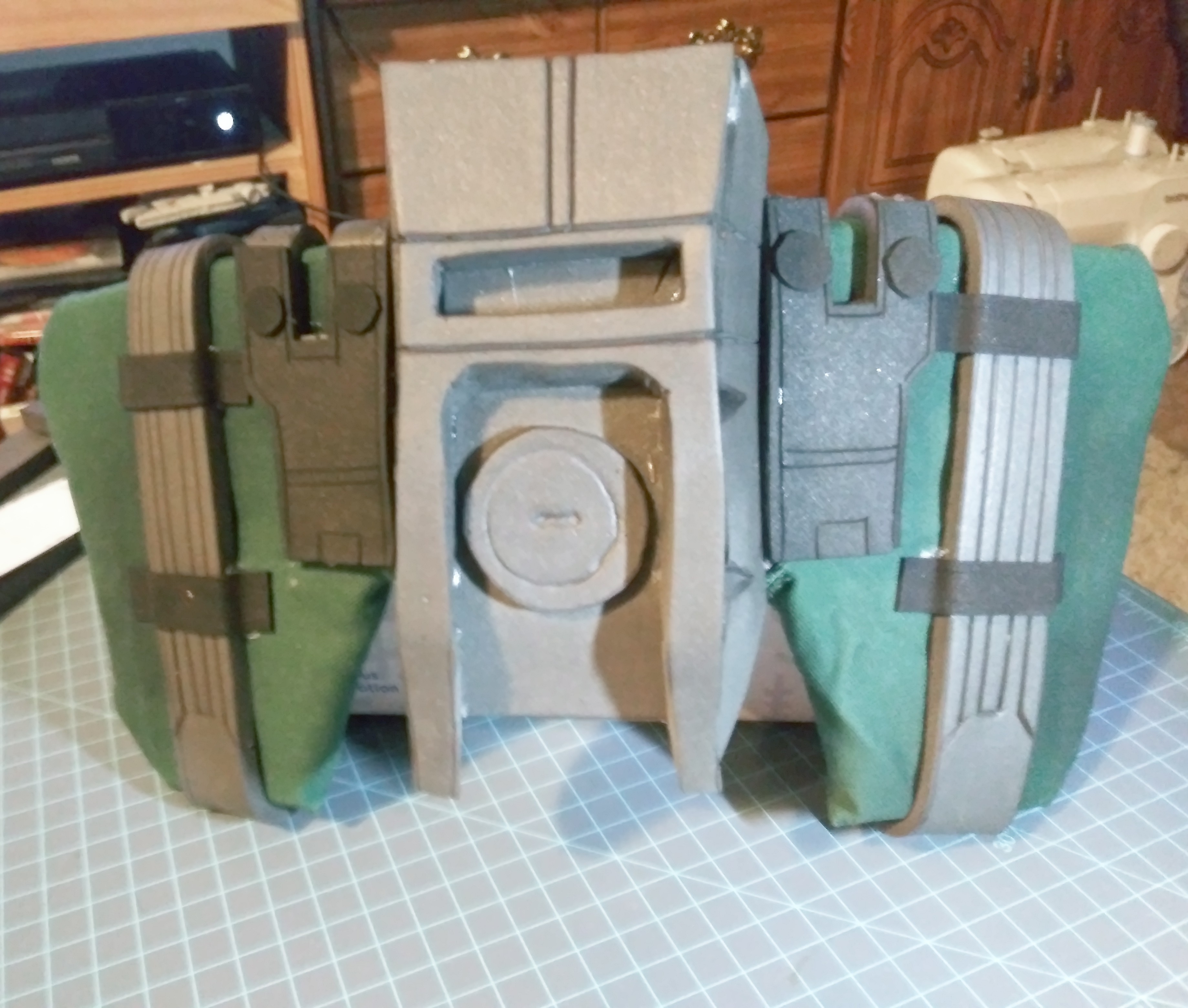 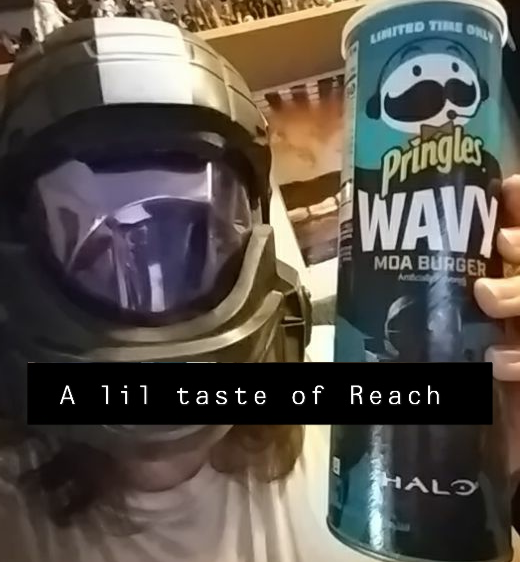 UPDATE: I've had to cut the ab armor into three sections in order to get it to sit flush on the chest armor. Additionally I've had to add part of the combat suit pattern underneath to hide some tears and messiness after removing the pieces that were there beforehand. Obviously everything is still pre-plastidip and paint. 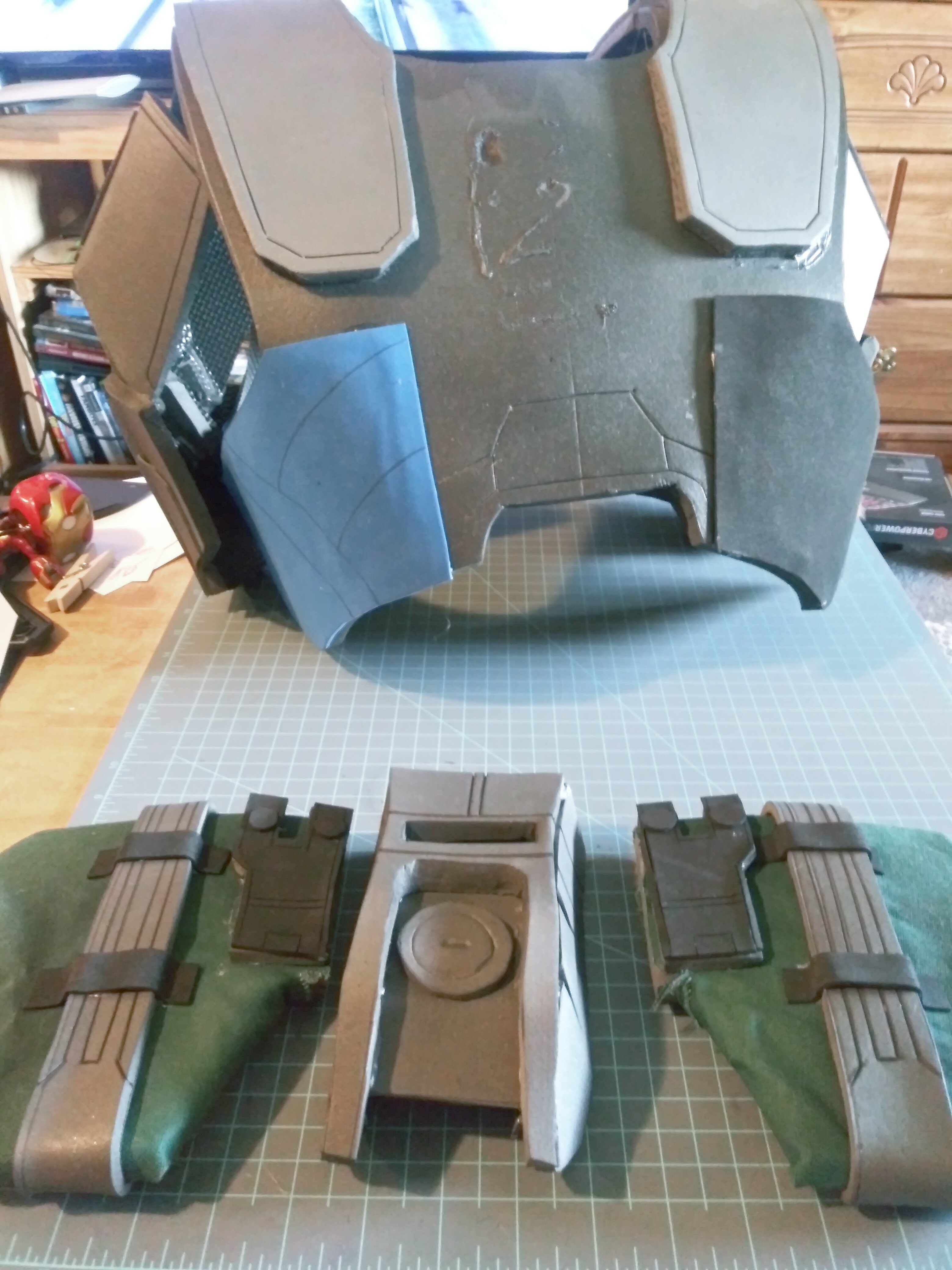 I've also constructed the belt and hip flaps. Will eventually add the strap and D-ring once painted. 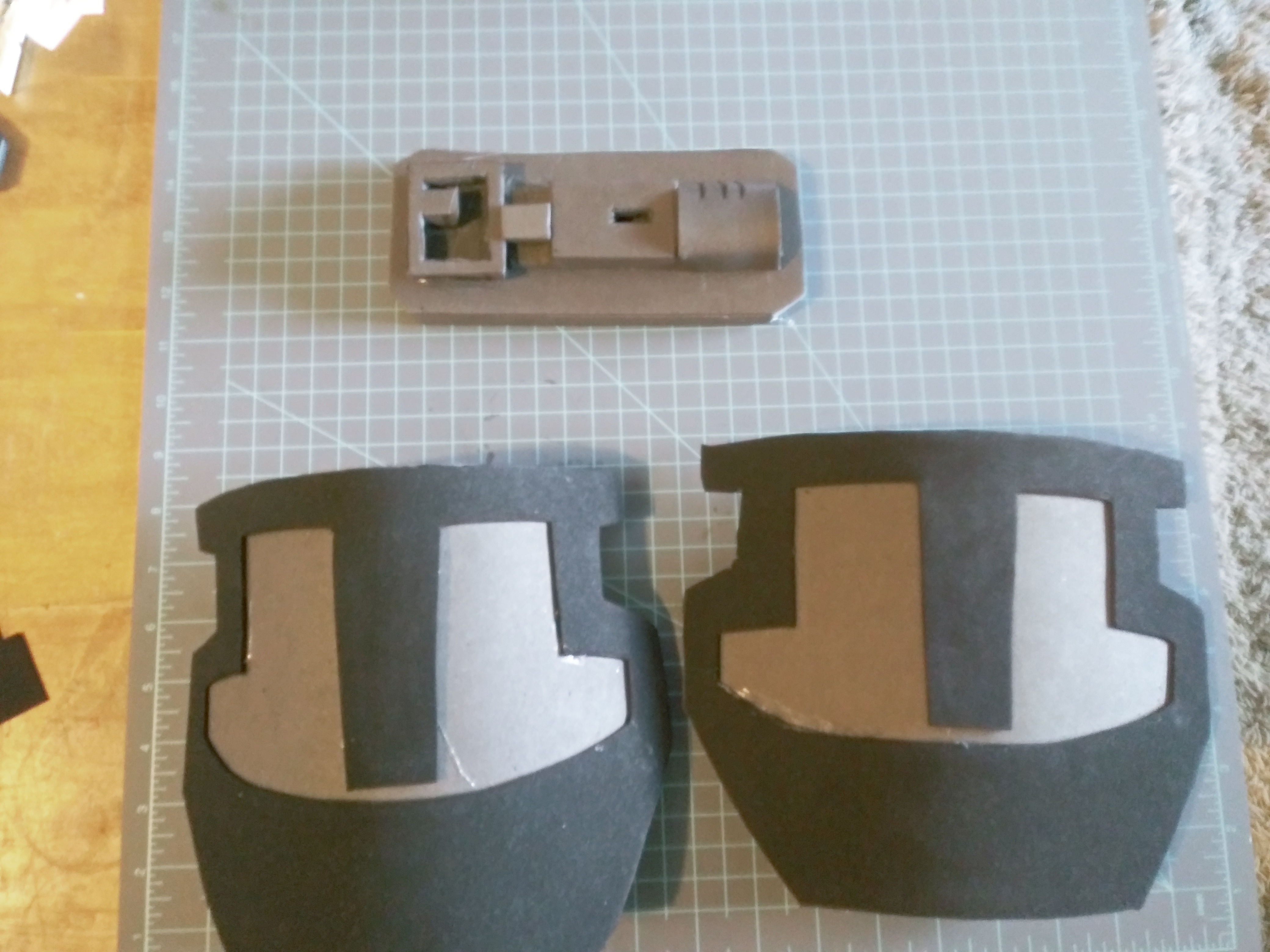 Last but not least, I've constructed the left thigh armor but after adding the top layer of craft foam I think I might remove it and have to cut some EVA in half. As you all can see, the hot glue strips are visible underneath and make it look messy and uneven. That's about it for now! 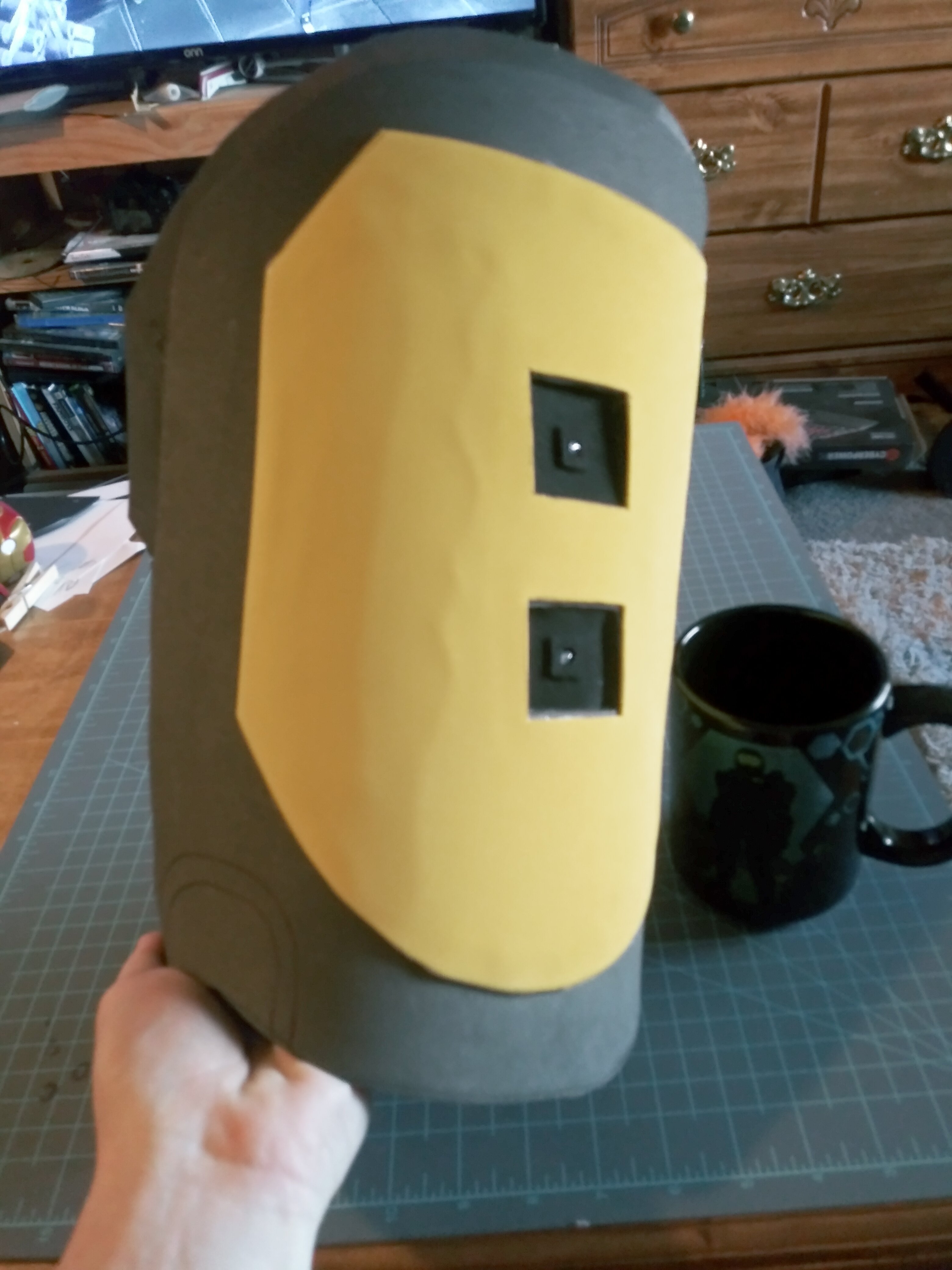 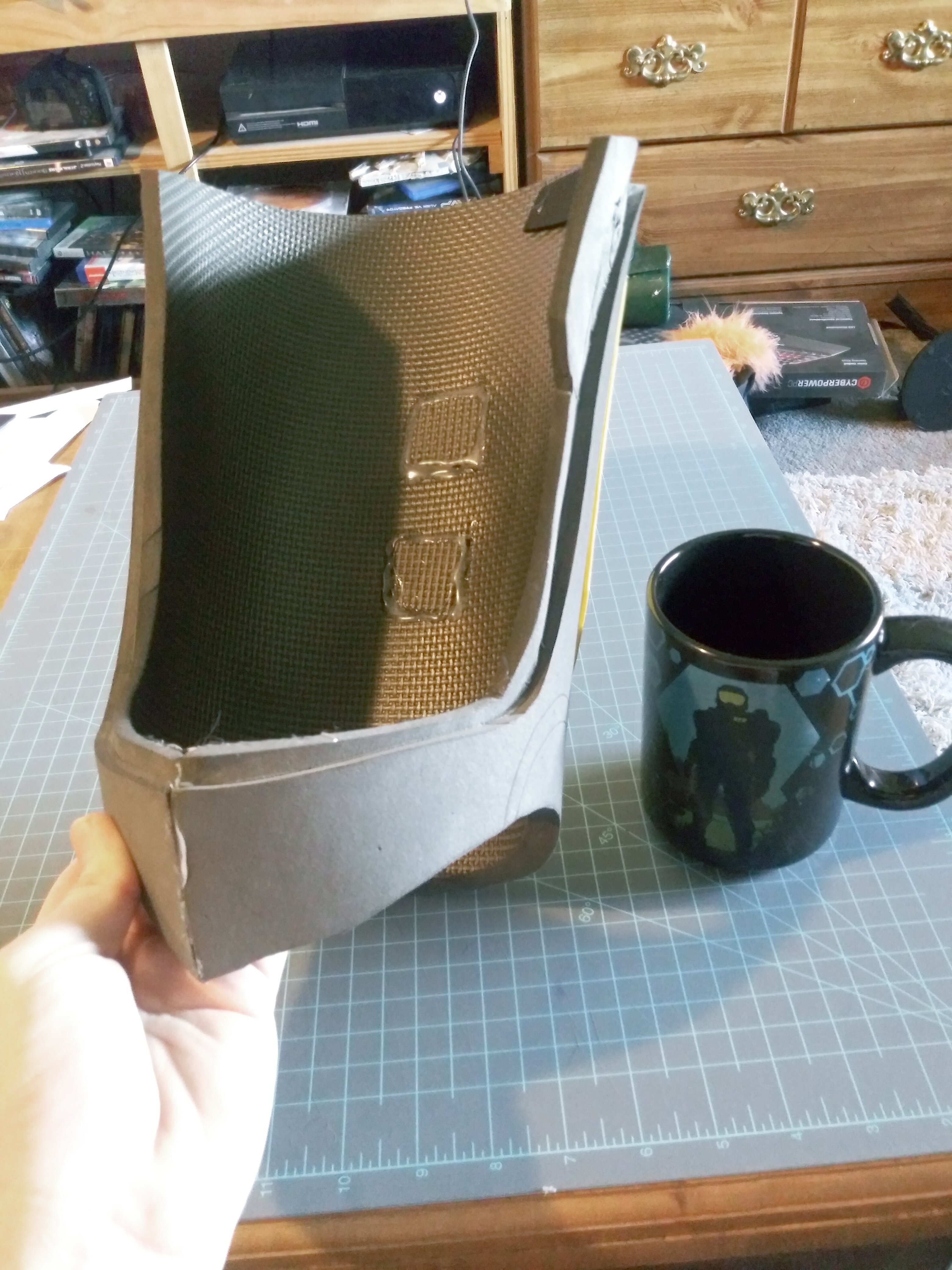 Hopefully it's okay to update this in a new post since I'm somewhat looking for advice here. Imgur is being kinda dumb and only let me upload it as a post and not singular images so I apologize for making you all have to click a link. The issue is described below with my shin pieces (and bonus pic of my new chest piece prior to seam filling!)

Well, I've finished one of the shins but even with resizing a few areas I can't get my foot through the lower part. If I leave them at the normal size the templates were sized at, these things would so massive they would reach mid thigh. I'm wondering if could cut them in half height wise along the red line and essentially make them clam shells though. It could work, I'm just worried about the seam lines where I cut them being "sealed" when I wear them. I don't want it to /look/ like it is two pieces. I don't really see another way to do this tbh...

Canadian Regiment
The ODST shin is a typical case of game vs reality. A perfectly scaled shin is impossible to put on. I have experienced the same issue. I ended up making mine oversized so I can slip it on.
I have also seen people make the back lower half removable. It would attach via magnets and then a strap wrapped around to help keep snug and help minimize any visible gaps

PaiganBoi said:
The ODST shin is a typical case of game vs reality. A perfectly scaled shin is impossible to put on. I have experienced the same issue. I ended up making mine oversized so I can slip it on.
I have also seen people make the back lower half removable. It would attach via magnets and then a strap wrapped around to help keep snug and help minimize any visible gaps
Click to expand...

Yeah, I'm definitely familiar with that from hanging around 501st peeps (and not to mention a few other pieces on Halo kits). I think in my case since my shins are smol just removing the lower back won't be enough but I could try and fiddle with it. I had thought if I went the clamshell route then I could have a wrap with Velcro on it and then sandwich the two pieces. Embedded magnets might also help the seal in a few places too! Thanks for the reply! ^~^

My progress on Gen 3 armor

My progress on Gen 3 armor