To start off, all armor parts were made by Sean Bradley and the the helmet cast and visor was made by Justin Branfuhr.

So back in 2019 I was getting bored building 1:35 models and decided I wanted to make a 1:6 ODST. The first one I made was just a plan old H3 ODST that kind of scratched the itch but I felt like it was missing style so I started work on a second and oh man did I make something cool. With my mix of modern tactical gear and ODST gear I started to create my own fan-fiction unit consisting of camo clad ODSTs with weird armor configurations and cool GREEN visors.

This was the first and is the heavy weapons trooper.

After the first figure was made I wanted to do more but then 2020 happened and I got a lot of unexpected free time at home. So I bought myself an airbrush and went back to working on oddball projects.

This was my second, the sniper trooper.

(I swear this is about cosplay, I'm getting there.)

After the second figure I started digging around on Etsy and found Bradfuhr's Recon helmet and knew I needed to make my 1:6 figure into a 1:1 suit of armor.
And here is where it all started! Such a clean helmet! 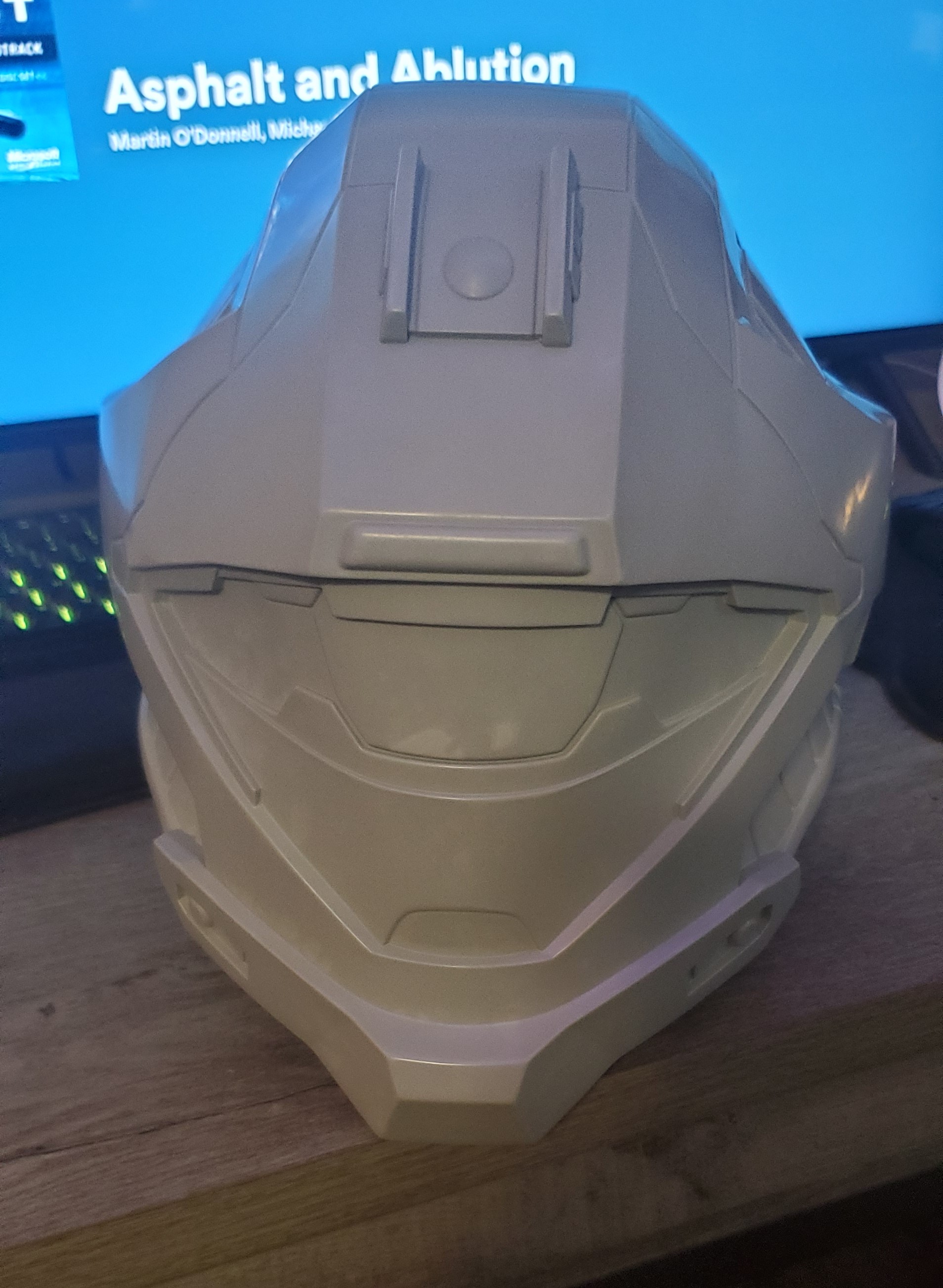 It didn't take me long to get it painted and I am very happy with the paint job for it only being the second helmet I had painted.

And then I added the awesome visor from Branfuhr. And just recently I added fans to the helmet. 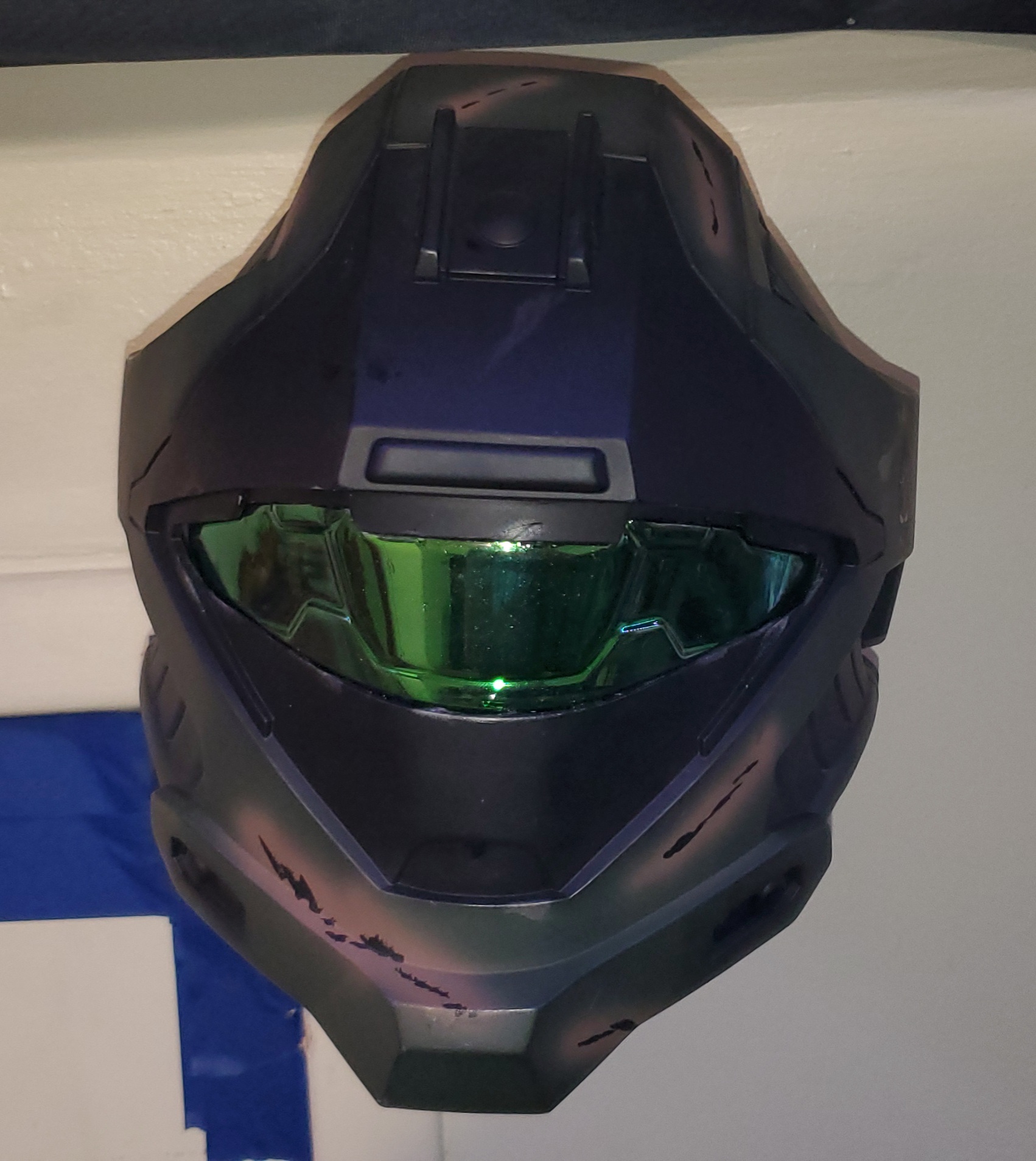 A few months later I was able to get my hands on one of Sean Bradley's ODST armor kits and then sat on it for a while because of starting a new job and life just being crazy. Once I did start working on it I ran into some problems I wasn't expecting. I thought I could just rivet parts together without using some kind of washer on the backside. This lead to me cracking some of the armor bits and I had to come up with a way to repair and reinforce the damaged and weaker spots. Maybe it was time for me to actually look at the instructions? The instructions mentioned something about using fiberglass resin mixed with bondo to make the armor harder so as usual I just winged it and made some chunky mix that worked but looked awful.

After playing around with the armor for a few more months I decided I needed to actively start working on the armor so I started on the calf armor and learned that I must have very large calves. Because of that I had to extend the back of the calf armor and made a patch out of scarp plastic, hot glue, and more Bondo mix.

Its not pretty but it works. I put the calf armor together in a way that all I have to do is slip them on. I plan on adding clips that attach at the back of the knee to whatever pants I finally decide on so the armor doesn't move around.

Here are both calves. The green one is just primed, next step is to be chromed.

(Yes I know my work area is a mess, I'm working with limited space.)

Most of the armor is assembled and ready to paint. only things that need work are the shoulders and the back armor.

The gauntlets are put together in a way that the sperate when I put my hand in and then close back up around my wrist.

The thigh armor is attached to a drop leg mole panel and the left side is getting a pouch attached to it. Most parts that have automotive trim around the edges to hide my poor attempts at sanding them down and to keep the parts from cutting me since it can be very sharp.

Early test fit of the armor over the plate carrier base.

Final attachment of chest armor before I started to paint it. I've taken the commando mag off because it was to long and would rub against the chest plate.

All chest are can be removed via buckles or Velcro to make repair work a lot easier.

The neck armor parts can be separated and have elastic bands on the buckles so they can flex with movement.

Right now as it is it looks like I'm trying to make Mando armor because most everything is chromed but the chrome is only the first layer so that when I start weathering it will look metal underneath the main paintjob. ( This chrome paint looks really good but man does it stink.)

This is pretty much where the armor sits at this moment. I started this project in 2020 and I'm just now in 2022 starting to make actual progress. I need to go to the hobby store to get paint so I can actually start the main paintjob and I need to get the shoulder armor trimmed and make some kind of attachment method. I will try to keep this up to date as I continue but I have a ton of other projects such as an alternate helmet that I need to have custom parts made for.


( Note for mods: If ive posted in the wrong place just say so, I'm still trying to get used to navigating the forums.)

Nice! Like the idea of using the leg panel to attach the thigh armor.

Small update: left by armor is pretty much finished.

But now I'm running into the problem that my local hobby store is having trouble getting Tamiya paints, which are the primary paints that I use. They didn't have a single jar of flat black acrylic paint.

Most of the front chest armor is done! 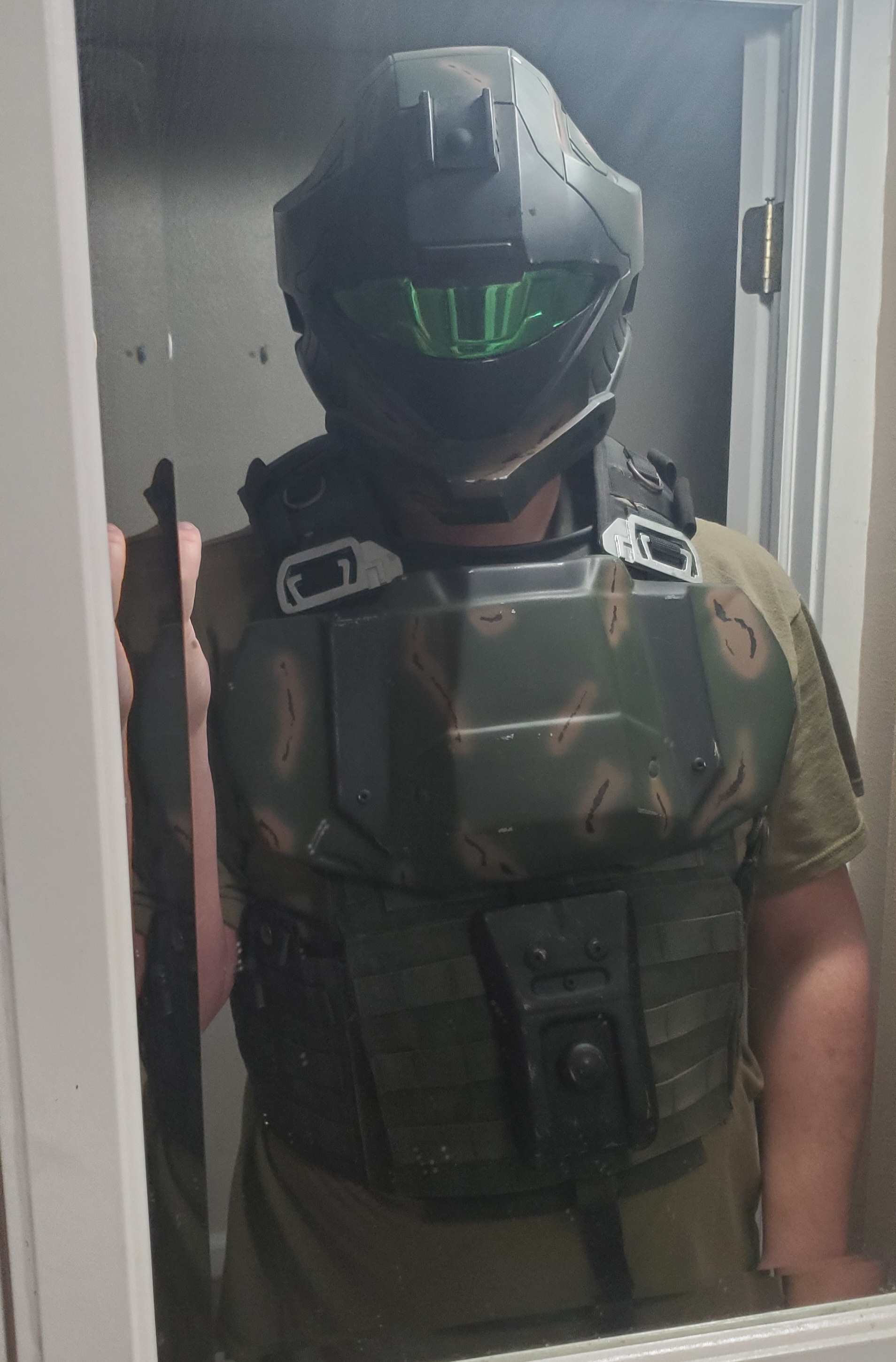 Wow dude, it’s turning out nicely! Can’t wait to see the completed set. Love the colors and pattern you went with.