I'm a Star Wars costumer, member of the MMCC, 501st and Rebel Legion. That takes up the majority of my time, building, trooping, etc. But I've gotten to the point where I want to build a costume that is just for fun. No costume requirements to meet. No approval process. Just a fun to wear at conventions costume that isn't my Merc/Clone/Jedi. So I turned to the world of Halo. Confession time. I've never played any of the games. At all. I'm drawn to the universe and the characters and the armor and tech. The ODSTs in particular speak to me. So I decided to build a "themed" ODST costume because I want it to be something that's different and fun to wear. Its going to be a straight ODST build but with a custom character paintjob and accessories.

I know a lot of you build with EVA foam and that's very admirable. What you guys do with foam is beautiful. But I don't have those kinds of skills or the personality to sit and cut and shape stacks of foam. Its just not me. So I bought one of Sean Bradley's kits a few months ago. I now have the time to put it together and hope to get it ready for a convention in January. I haven't gotten into the armor yet but I have the helmet finished (so if this project dies a lonely, miserable death at least I have a cool prop for the shelf). Its Sean's ODST Dutch helmet that I picked because of the extra details. No idea if its specific to Dutch or not. It just looked cooler to me than the Rookie version. Anyway here are a few pictures of the work I've done on it. 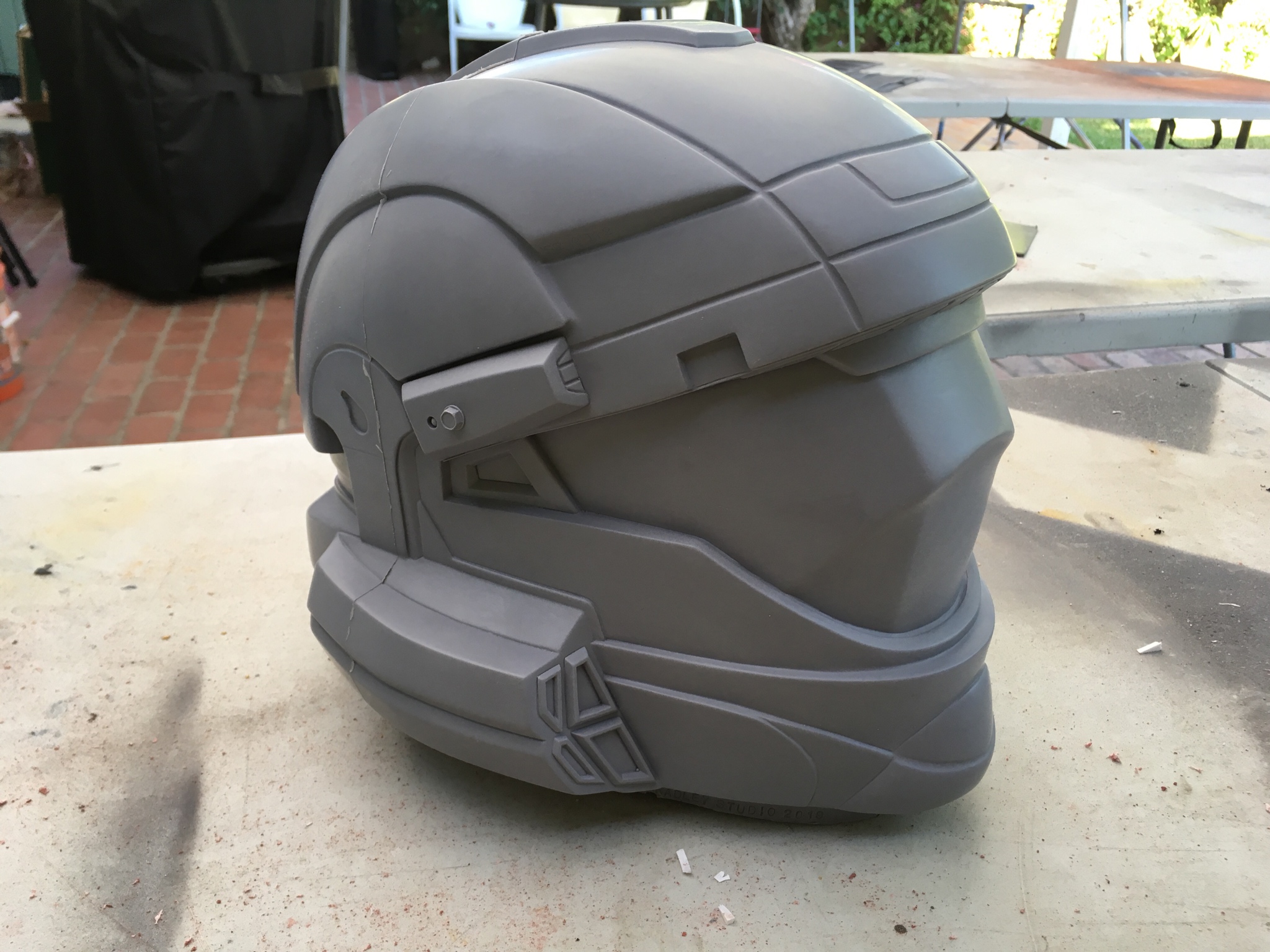 Visor and opening trimmed and sanded and prepped for paint. 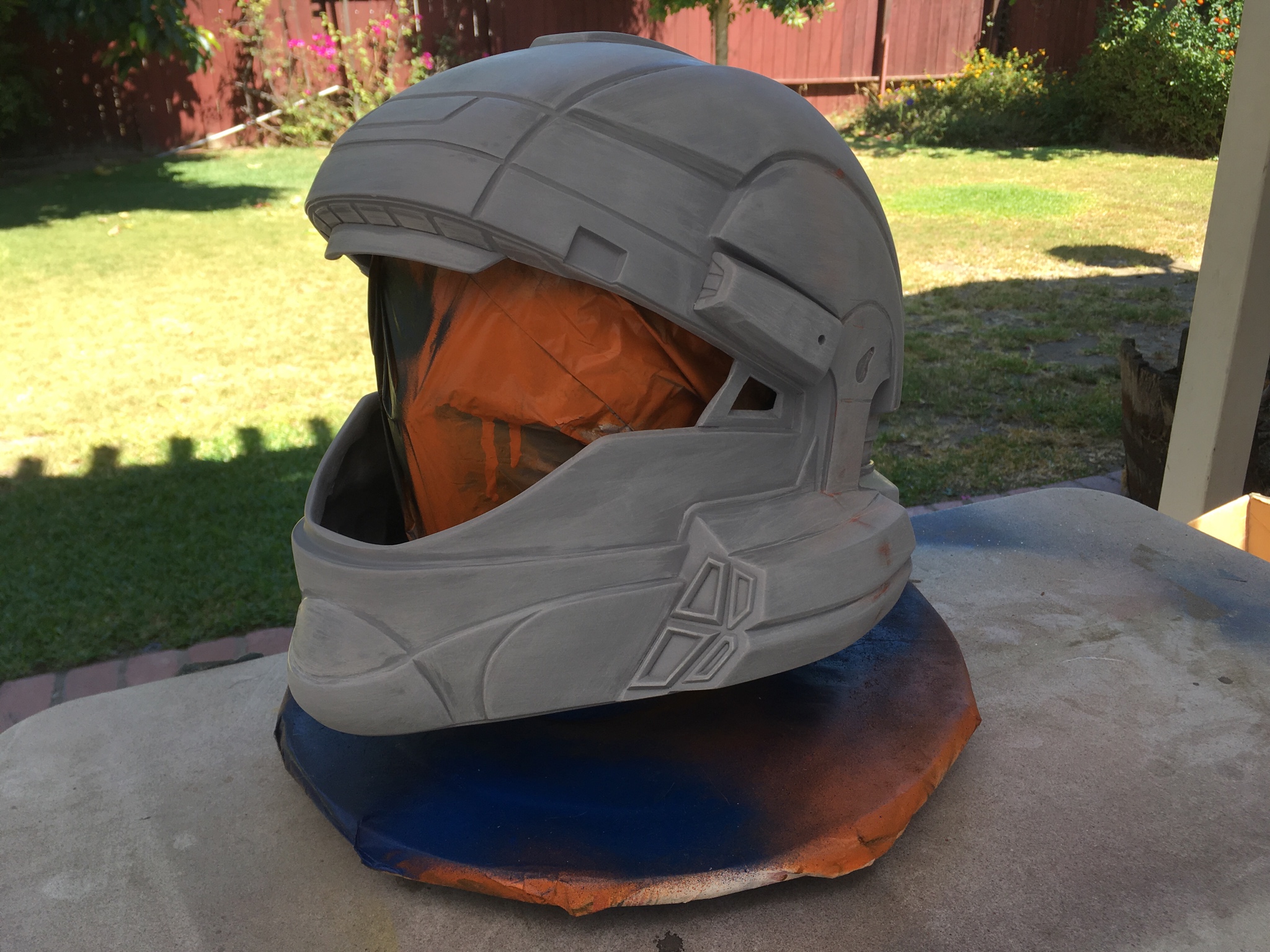 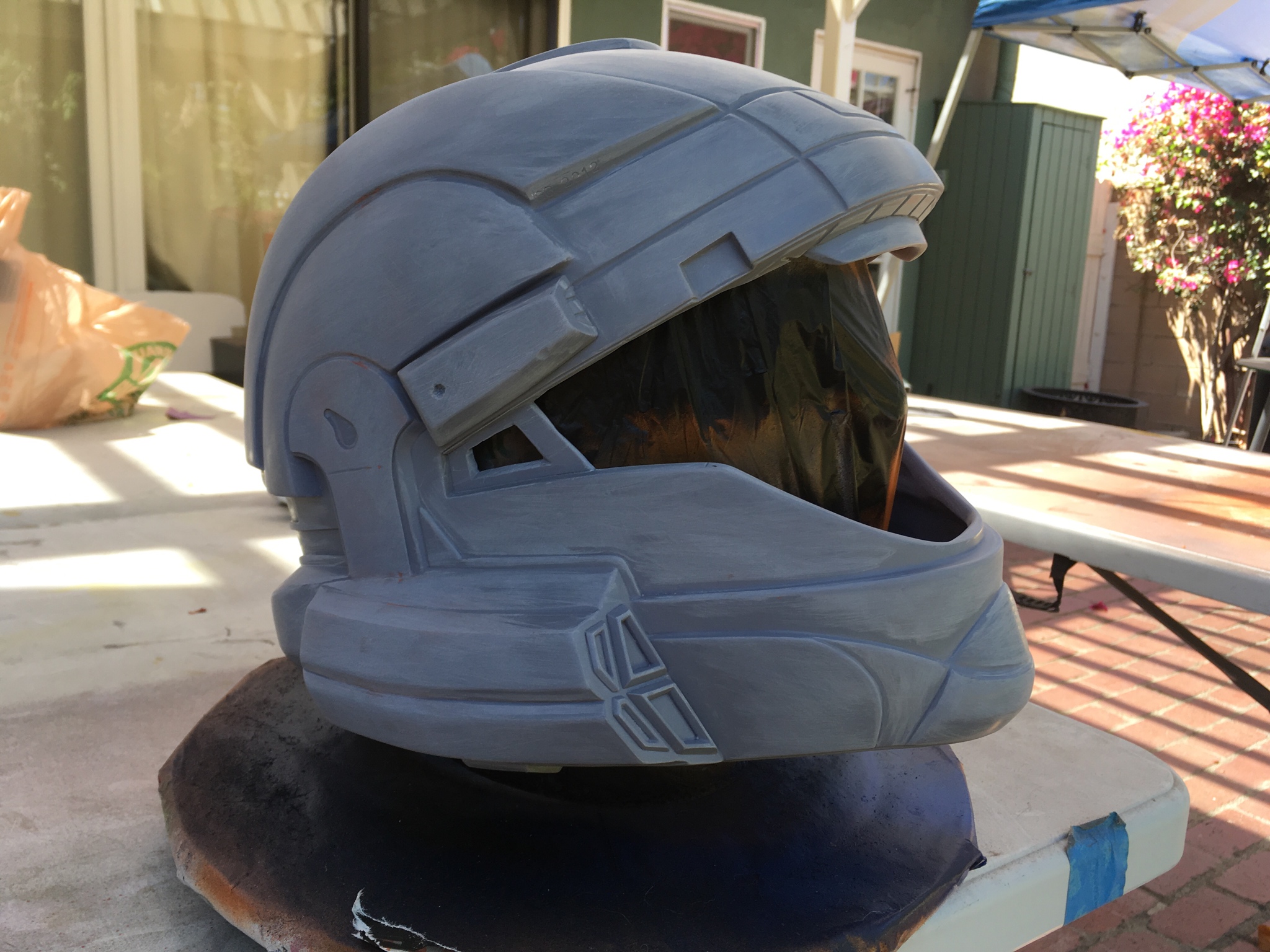 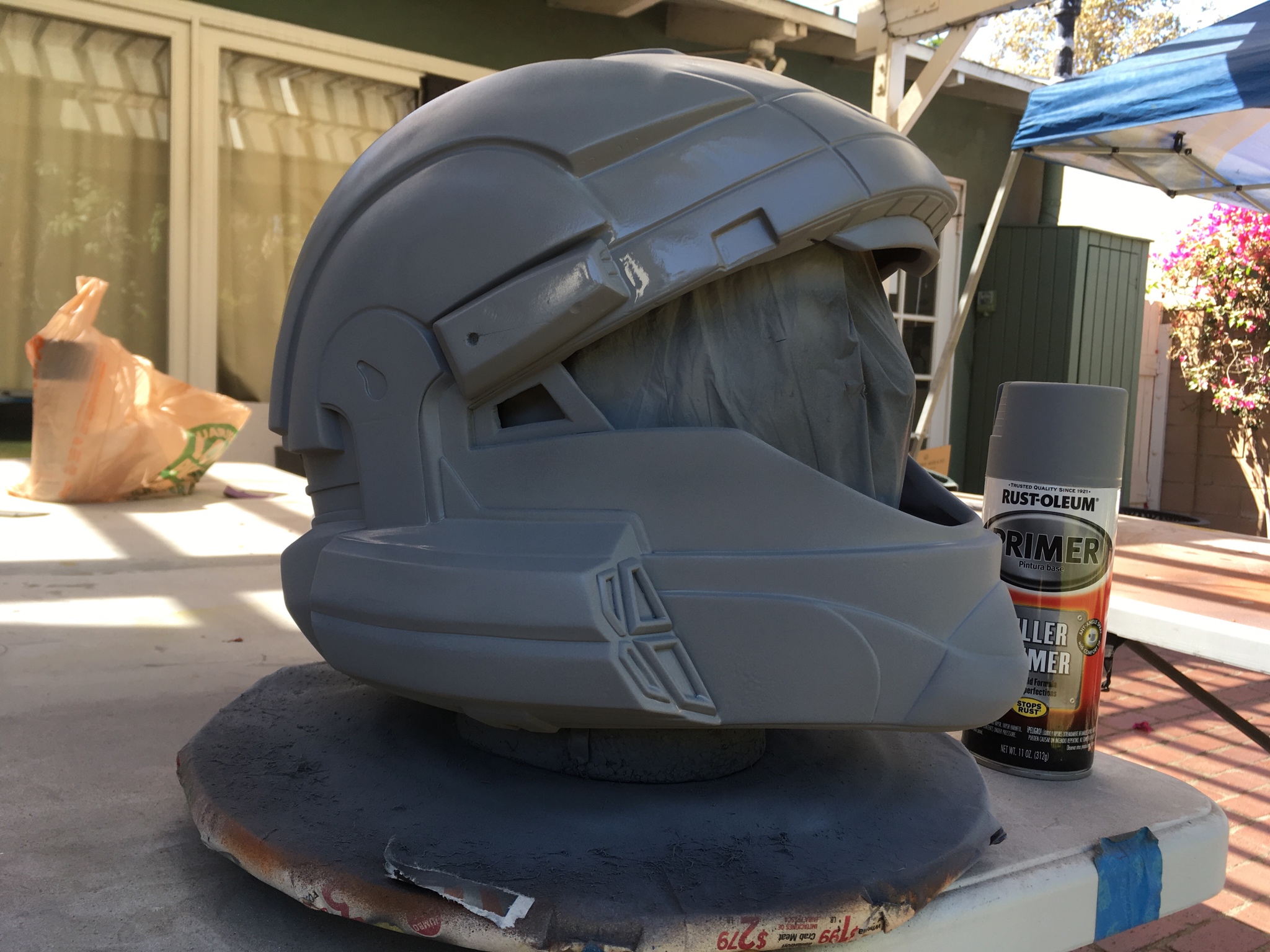 I applied a metallic silver base coat on top of the primer then added this metallic blue that I really dig the look of. 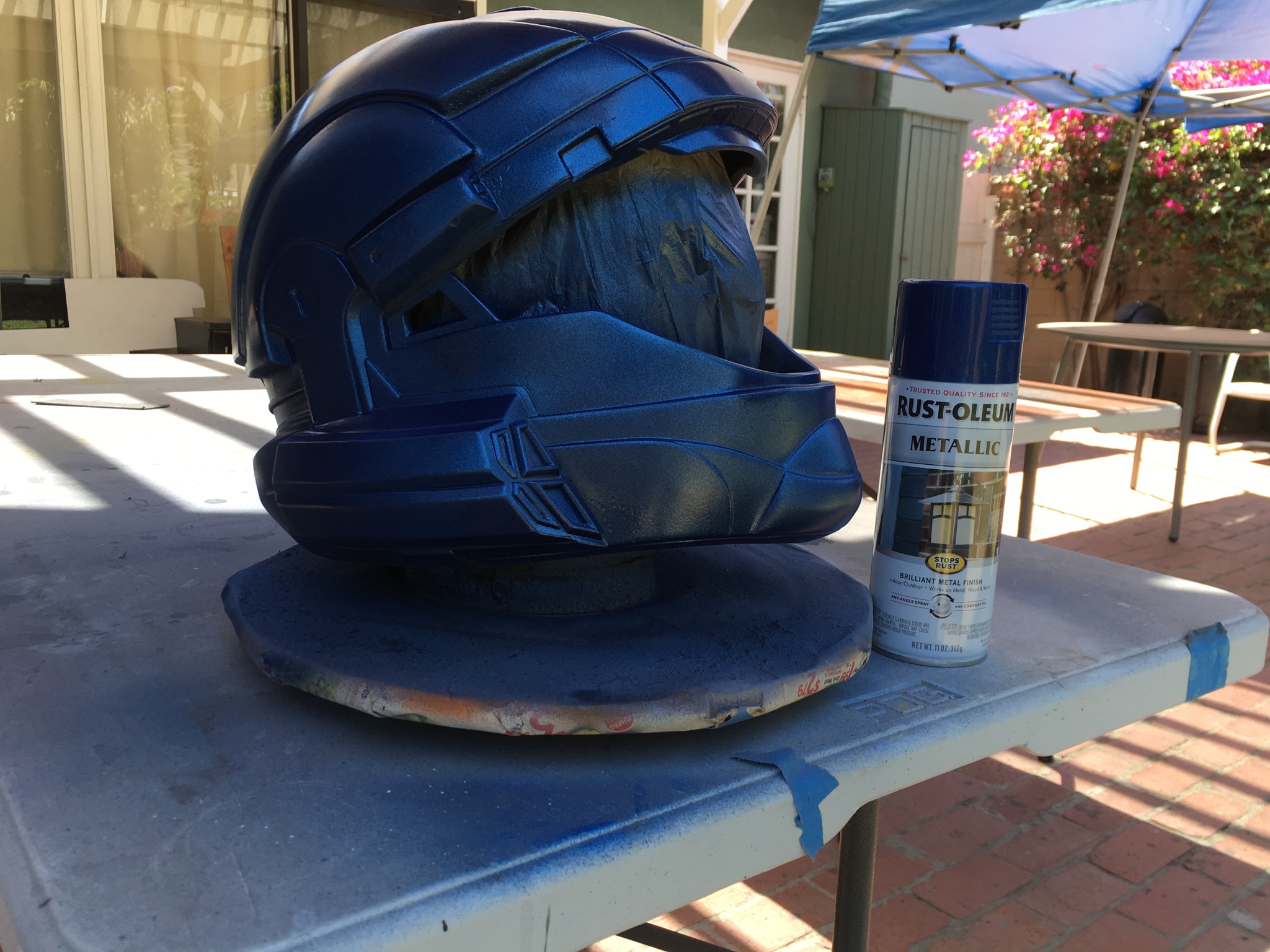 I've weathered it and painted some details on before hitting it with a matte clearcoat. I thought I had a photo of the finished helmet but I don't. I'll try to get that posted soon.

Next... the BBB of ODST! (that has been sitting in my garage since mid-October)

A couple teaser pics of the helmet that might give you an idea what I'm planning. 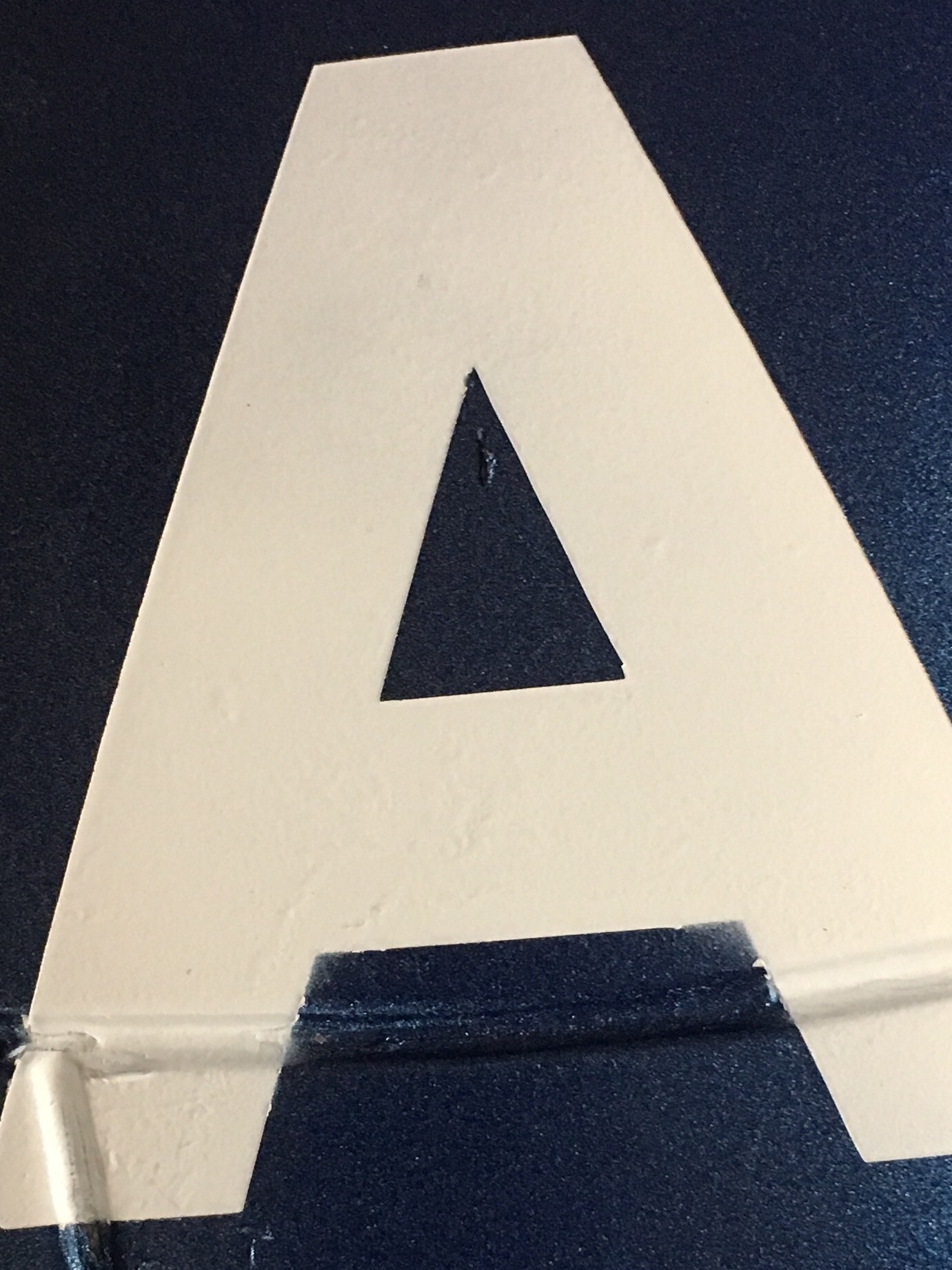 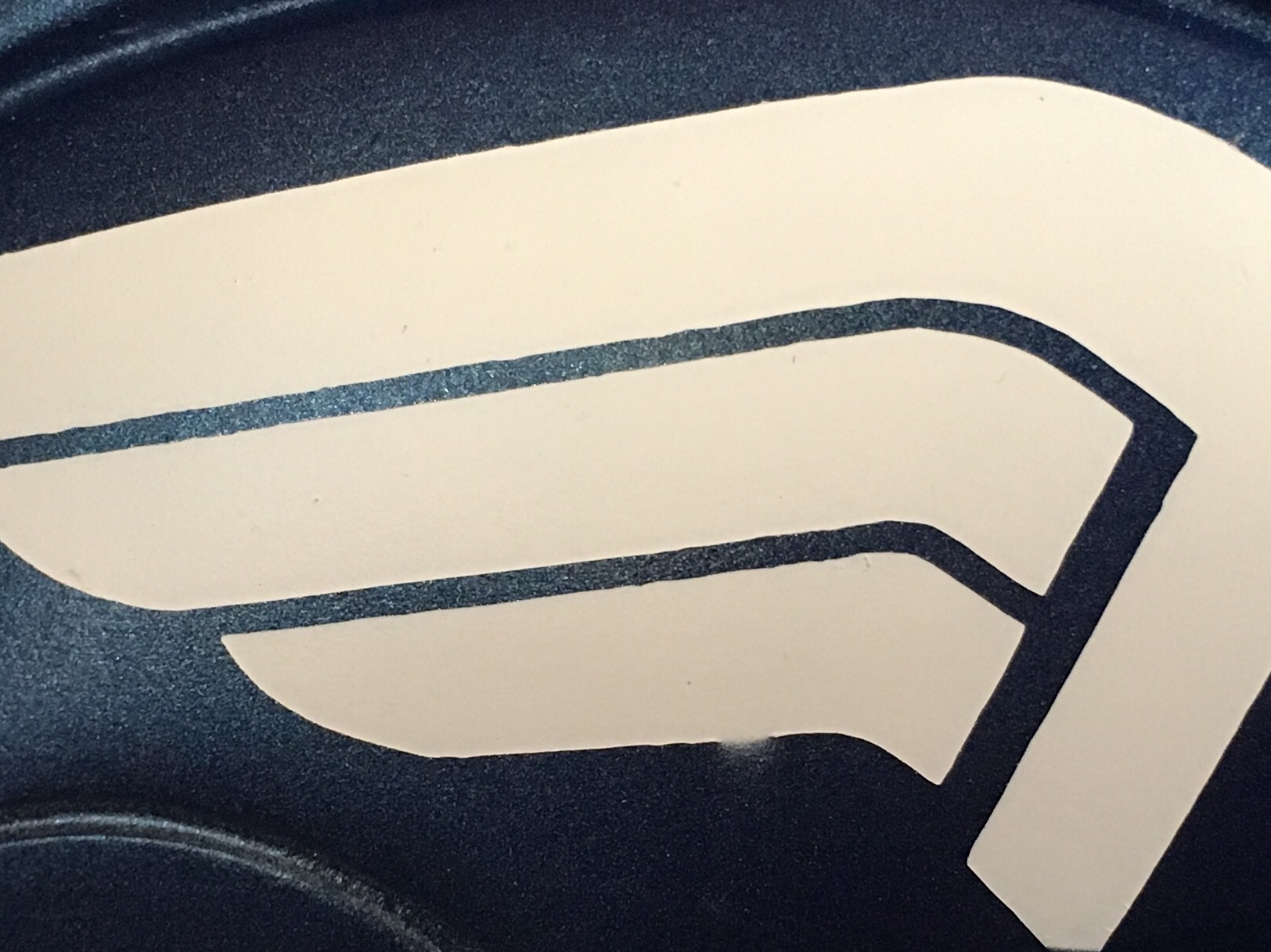 Got some good weather and a free weekend this past weekend so I got to cracking on the armor. As mentioned this is one of Sean Bradley's kits and its really nice. Not too much flash to remove and nice, clear trim lines.

Here's the MBB (Medium Brown Box) pic with everything inside. 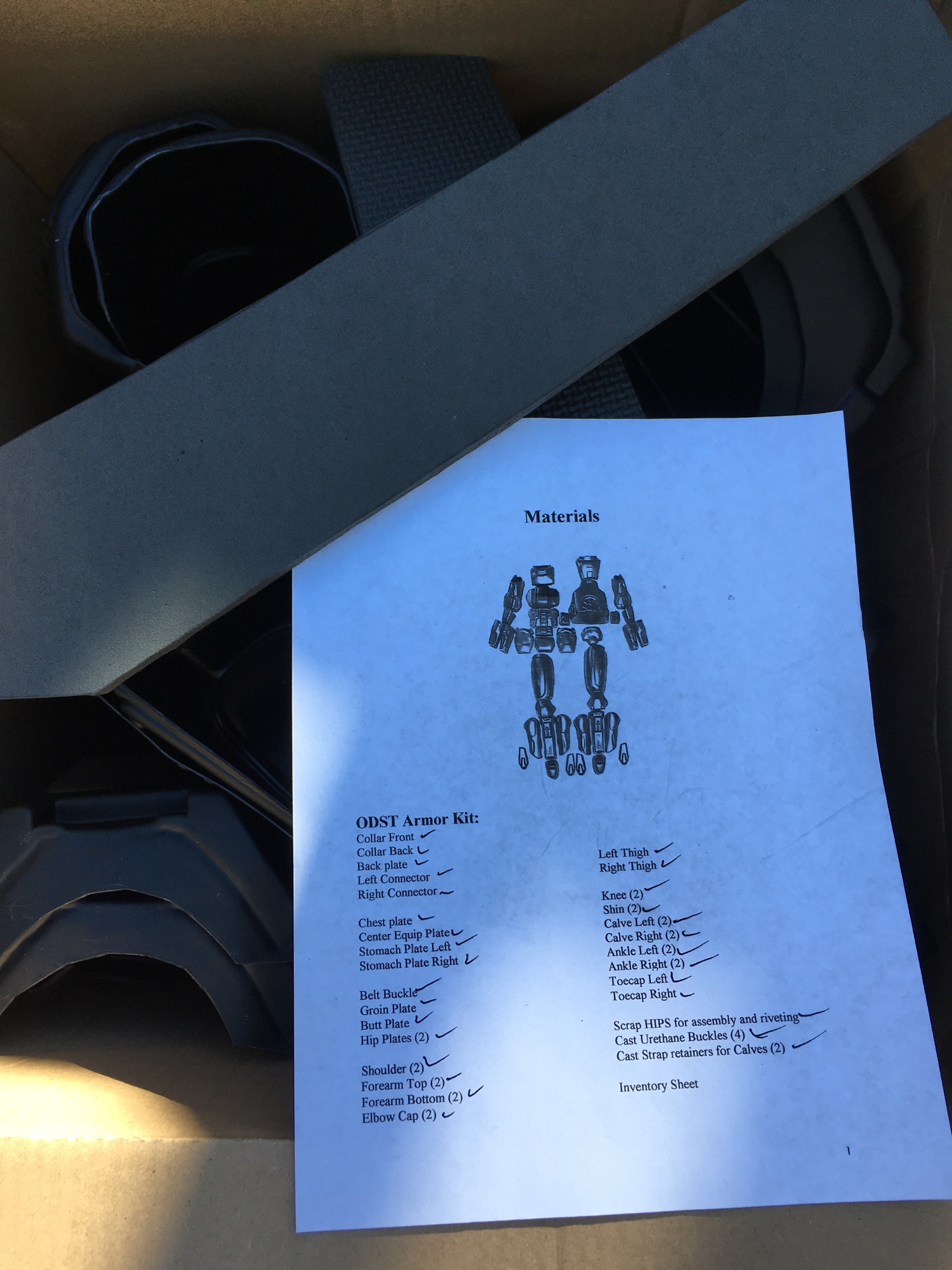 This is a shot of all the pieces I got trimmed and sanded. 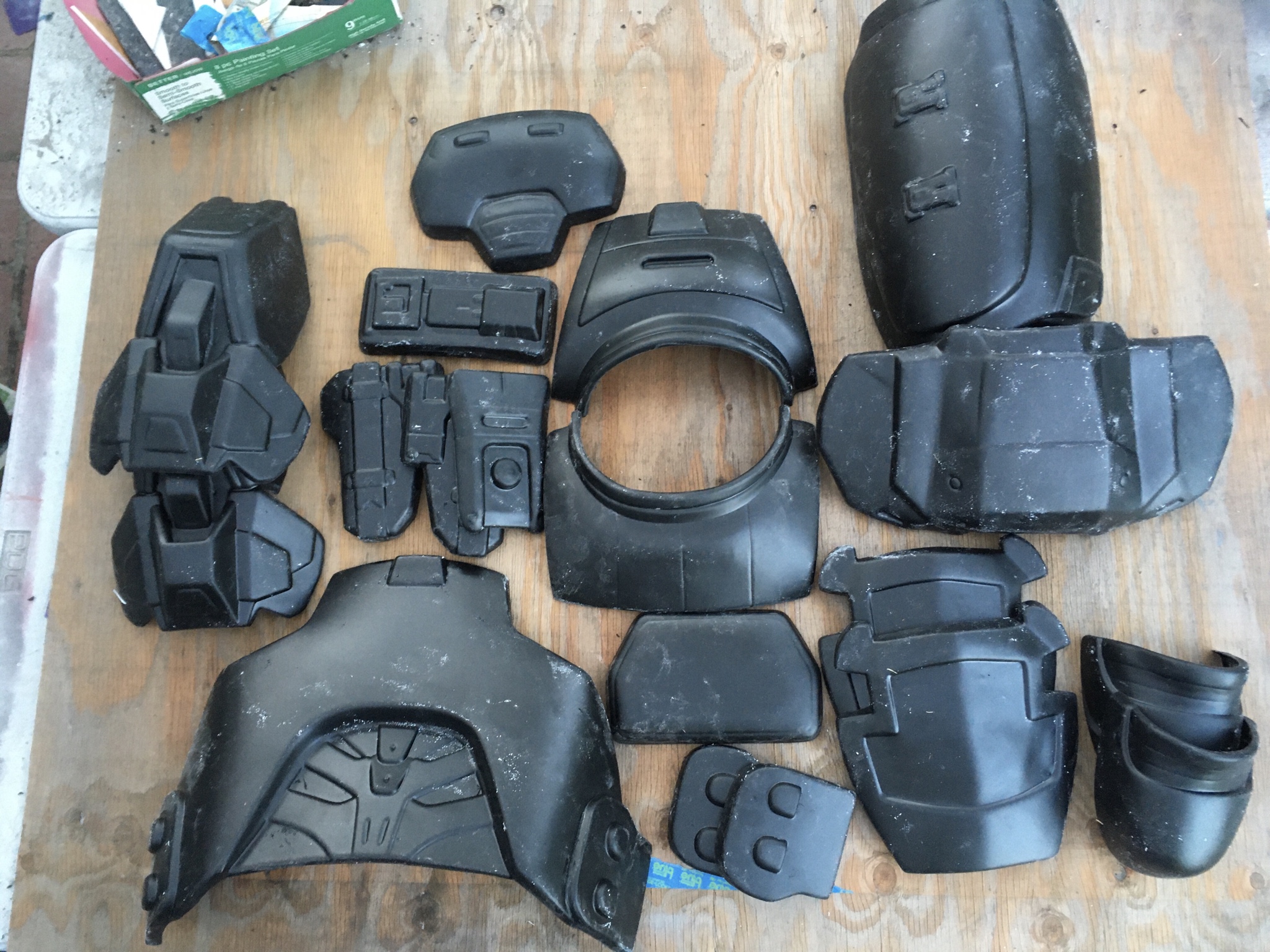 And the pieces I got assembled - the gauntlets, calves and the knees attached to the shin covers. 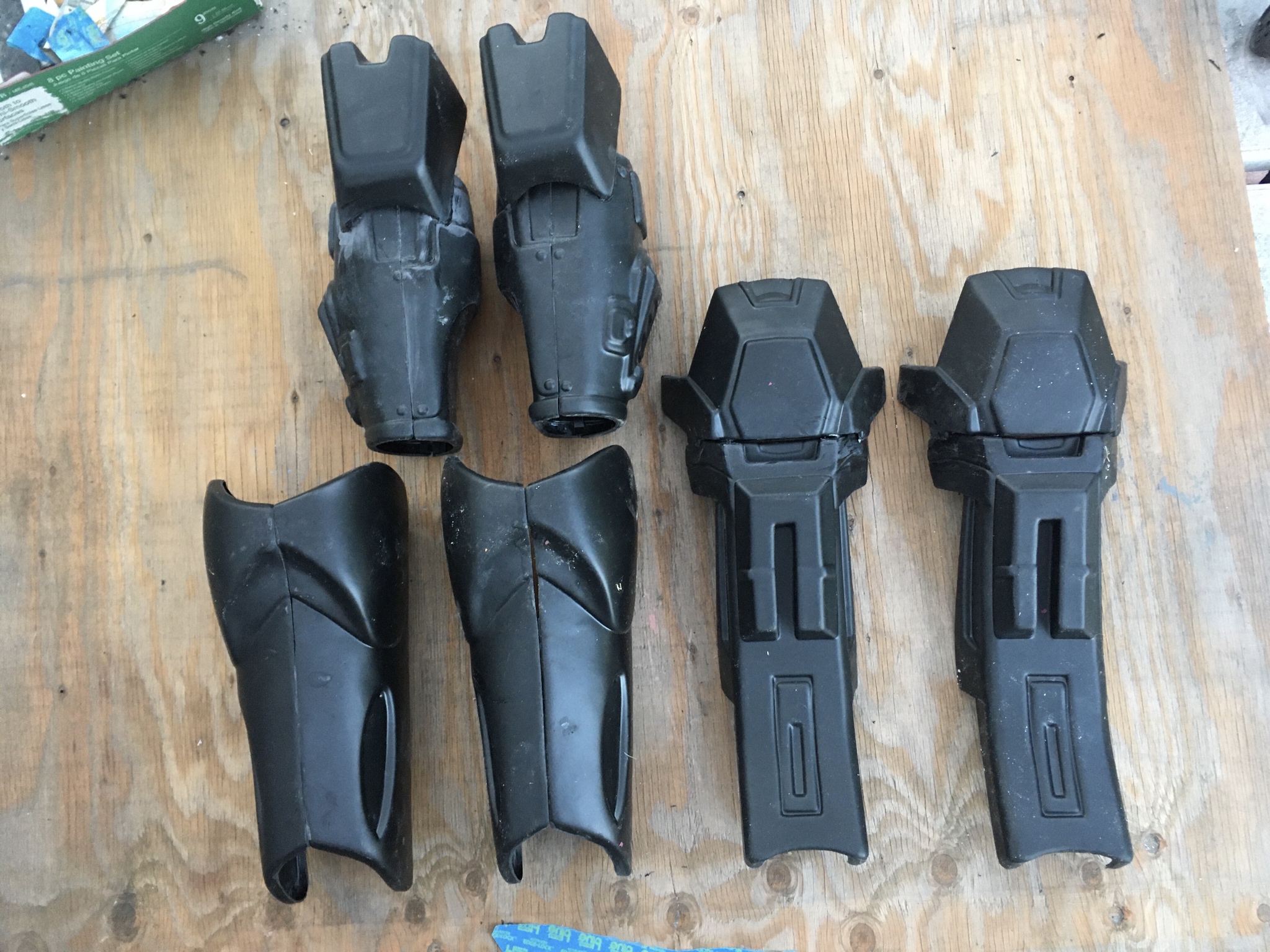 I still need to attach the ankle plates to the shin covers but I ran out of daylight. The gauntlets need the seams filled and cleaned up and then they'll be ready for paint and padding. But I'm going to hold off on the clean up and finish work until I get everything assembled and strapping figured out.

More updates as I get stuff worked on.

Pacific Regiment
Oo nice. I’ve seen only one other build with these kits personally. Keep at it!

I’ve been slowly working on Sean’s kit as well. It’s friggin’ stellar and he is absolutely willing (at least in my case) to answer any questions. That kit is the very reason I’m looking to start building my own armor and props. Keep us updated dude. Here’s mine in it’s current state when I wore it back for a halloween party.

how are you planning to attack the shin halves together? Im trying to work out the same problem.

If you’re referring to connecting the shin halves, I melted them together and sanded them down. (Don’t recommend) If you’re referring to attaching the calves and shins together there are a lot of ways you can go about it, for example I built a clip system similar to what Sean recommended on the calves and then wrap it around the shin and clip it in front when I’m ready to wear.

Inspired to build an ODST KIT
2 3