Midwest Regiment
Community Staff
Hey all, some of you may know I'm trying to build a sort of HUD into my helmet. I'm creating this post to track it's progress I realized I should make after meeting up with NobleofDeath16 .

Desired features
Some things I want to use it for: suit cooling/fan control, comms between other 405th units (that's you guys), night vision camera, music, Alexa (name remaped), minimap (including indoors, yes google has 'indoors maps' for some locations)
I also have an online degree in AI Deep Learning... so I'm hoping to apply that in some way, but idk how yet.
I want to turn the AI chip portion of the Mk VI helmet into a usb port.

Community requested features
Nothing seems to be here yet.

HUD Input
I have a keyboard in my forearm for input
It should be possible to add buttons to the armor itself, e.g. on the side of the helmet, for specific features like comms.

HUD Output
Stereo speakers
Wearable display beneath the visor Amazon.com: Vufine Wearable Display: Gateway (I swear it was 'only' $100 when I bought it)

Current Functionality
Current functionality involves a raspberry pi built into the helmet that can play audio through the speakers and display to the screen (located by the chin, it's the black square), though everything is interacted with via the a linux gui so I've yet to make my HUD app for it. Because my USB wifi card is so old though, it doesn't have internet access (hence the pic with Ethernet plugged in)

Here's some photo's of what I've got so far

O.0 you really have your work cut out for you. If you pull this off you are going to be an absolute legend. Just wow. I cant wait!

O.0 you really have your work cut out for you. If you pull this off you are going to be an absolute legend. Just wow. I cant wait!
Click to expand...

Honestly I expect the hardest part to be the hardware, e.g. the display. But I've already got that somewhat handled (it may not be an 'in-visor' display, but it is an 'in-helmet' display) so I'm fairly optimistic about the project.
As a software engineer, writing the app itself should be relatively easy for me to be honest.
Last edited: Jun 9, 2019

O.0 you really have your work cut out for you. If you pull this off you are going to be an absolute legend. Just wow. I cant wait!
Click to expand...

O.0 you really have your work cut out for you. If you pull this off you are going to be an absolute legend. Just wow. I cant wait!

Midwest Regiment
Community Staff
Gonna see what I can get done today: 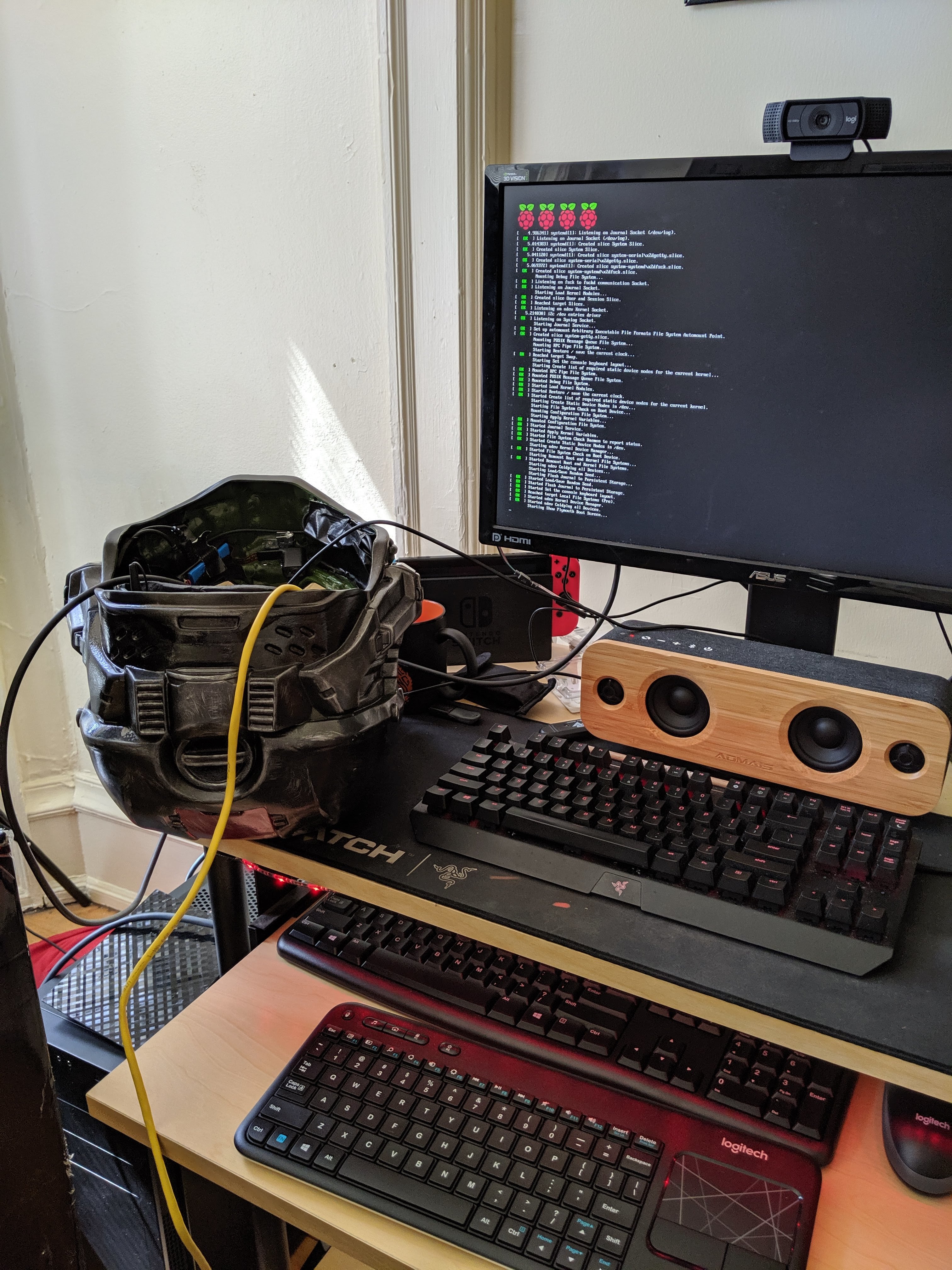 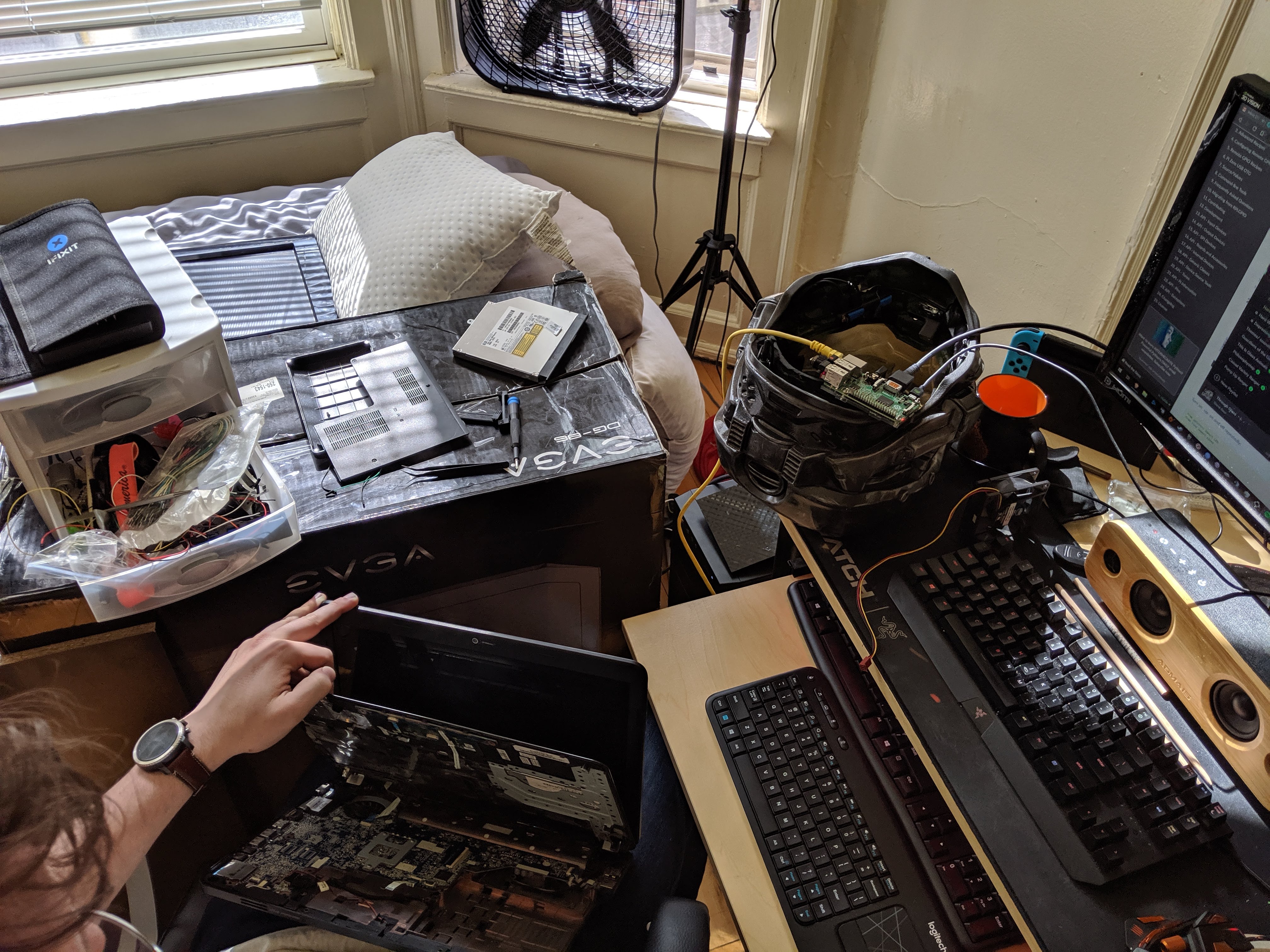 Midwest Regiment
Community Staff
Update: Music support via spotify has been added (no gui yet), and I've made a fan spin (but I can't use the fan or the way it's setup, so meh)

Pacific Regiment
Dude this is so cool!!! If you get it working the way you want I would totally love to do the same to mine!!!

Badkitty said:
Dude this is so cool!!! If you get it working the way you want I would totally love to do the same to mine!!!
Click to expand...

Oh you can bet there'll be a tutorial at some point ;-)

The spotify client I'm running is headless, meaning I currently have to use another device to play/pause music. I'm looking at the spotify web api right now to see if I can write a super tiny client.

That 'tearing apart a laptop' turned out to be a waste of time. I wanted to gut the fan out of it for helmet circulation, but the pins are way too small to be useful.

This looks so awsome! I can’t wait to see it finished.
Depending how much space the system takes up, I may have to put one into my helmet if you do a tutorial on how to do this.
Keep up the amazing work!

Midwest Regiment
Community Staff
Tonight I plan on reevaluating the technologies I'm using. It would be a lot easier to build in functionality if I used a smartphone to do so. Build a smartphone into the wrist as a more Carter-esque tac-pad than my current keyboard-mouse tac pad. The idea here would be to use the phone as more of an input device (think about how Carter uses it in Reach), and then use the raspi and in-helmet devices data output (e.g. music, comms, display). So I'll be balancing the engineering tradeoffs after work.
Plus having a color screen that swipes and stuff is cooler than a regular'ol qwerty board.

Midwest Regiment
Community Staff
Being at work sucks when I just want to work on this. I've already redesigned it 3 times in my head today D: just sitting here lol.

Well hopefully you get a design you like. I just realized I probably shouldn’t try to do something like this to my helmet. With my luck it catch fire
Have you figured what kind of hud design you want it to have?

WinterHuntsman said:
I just realized I probably shouldn’t try to do something like this to my helmet. With my luck it catch fire
Click to expand...

Hahaha, it would be incredibly difficult to start a fire with the stuff I'm using.

WinterHuntsman said:
Have you figured what kind of hud design you want it to have?
Click to expand...

Right now I'm thinking about a split between a wrist-built tacpad (smartphone) with a secondary display in the helmet so you don't have to constantly look at your wrist. The trick is to keep the in-helmet display relevant and usefull... CAUSE OTHERWISE IT'S NOT A HUD

Southern Regiment
Hehehe. A HUD... so you dont have to look down at your wrist.. I see what you did there!

Midwest Regiment
Community Staff
I think I'm gonna try avoiding smartphones for now. I don't want to alienate iPhone users (since I can only do Android dev atm) and, honestly, something about it feels less cool. If I run into too many issues though I know I can spin stuff up there pretty quickly.

Southern Regiment
Hurry up! Also there is an app on the app store called Zedge, it has ringtones, sounds, alerts, wallpapers, for about anything you can think up! "Cough" even Halo, like Dots' AI interface

zachturner009 said:
Hurry up! Also there is an app on the app store called Zedge, it has ringtones, sounds, alerts, wallpapers, for about anything you can think up! "Cough" even Halo, like Dots' AI interface
Click to expand...

I'm familiar with Zedge, but it hadn't occured to me to build in sound effects. I'll look into it .
Last night I was trying to figure out the Spotify API, and I got some stuff figured out there. Security requirements always make things more difficult.
Once I get music playing, I plan on working towards an inter-suit comms system.
Last edited: Jun 12, 2019

Midwest Regiment
Community Staff
Wooooooo! I was able to use my app to start playback! It's useless at the moment, because it requires a terminal, but it means I finally got past the authorization issues! Time to code!

Midwest Regiment
Community Staff
Also, fun fact: this isn't my first HUD. I made one freshman year of highschool.
Thats a 2" tft display plugged into a raspberry pi box that I wore clipped to my belt, with a keyboard strapped to my wrist for control.

If you're observant, you'll notice the keyboard looks similar to my suits forearm ;-)