Canadian Regiment
Im back! for real, this time its happening. The whole thing everyone. But don't get too scared for me, I have a bunch of friends helping.

And the plan is intense:
-Armor will be pep and resin so they'll be hard and heavy (realism right?)
-Armor seals will be marine vinyl to keep everything a little more comfortable and I just like variation in materials. (similar to how liltyrant did her Kat armor seals.)
-There will be EVA foam parts to improve flexibility and comfort. like the spine armor and probably the inner part of the bicepts.
-Undersuits will be slighty more varied from person to person. From absolutely scratch built to adding stuff onto under armor. (There will be videos on my youtube channel for how I'll build the undersuits eventually)
-Guns will be either bought 3d printed and cast in resin or modeled from scratch and cast in resin.

Pacific Regiment
Washington
Thread = watched.
This will be pretty cool, can't wait to see how this turns out. Reach is just the thing today jeeso, I love it!

Canadian Regiment
Thom A293 The disappointment of recent games has made us nostalgic for old ones... not that I hate the new ones.. but you know what I mean..

electricknite said:
Thom A293 The disappointment of recent games has made us nostalgic for old ones... not that I hate the new ones.. but you know what I mean..
Click to expand...

Some of the Cons these days are bringing those old games back.....Retro Mini Cons within some of the bigger con across the country....Including the Great White North....got ya covered @electricknite. If I find one, I'll post it in the Canadian 2017 list just for you .

I'm excited for your dedication. I am readily available for any resin related questions if you run into trouble. But, judging by your past work I think you'll do just fine.

Pacific Regiment
Washington
PerniciousDuke cause she will be making mee Bwaaa haha Haa! Nah, she's just planning on making the whole team which would include noble 6.

Though now I gotta question. Before or after deliver hope? Before would result in noble 6 being Thomas (Thom who is better than masterchief) and Kat still having her other arm. After would be the noble 6 you play as and Kat would have the prosthetic.

Canadian Regiment
PerniciousDuke because I'll be building him instead of the custom 6 from the game. Thanks! I may need some advice when the time comes.

Thom A293 you got it! I'm making you. Haha. but yes, I'll be building Noble pre-battle of Fumirole. So Kat will have both her arms. BUT because I'm a glutton for punishment and a completionist, I'll try to also make a prosthetic too so I can switch it out and do whatever.
also I just really want to build that nuke....

For now, as a first update:

I built my left shin/knee pad.
The file that the FJ/Para knees comes from wasn't thrilling me so I used the regular left/right ones that don't include the knees. probably more work but they looks a lot more accurate to game then the other one does.
I scaled it to fit between my inside ankle bone up to where my knee starts to bend. Turns out I was the same size the default comes with. cool.

The FJ/Para knees needs some help though... holy is it inaccurate. looking at Jun's knees, the bottom of the knee (with the hole) isn't quite the right shape so I'm going to try to make my own template for it. 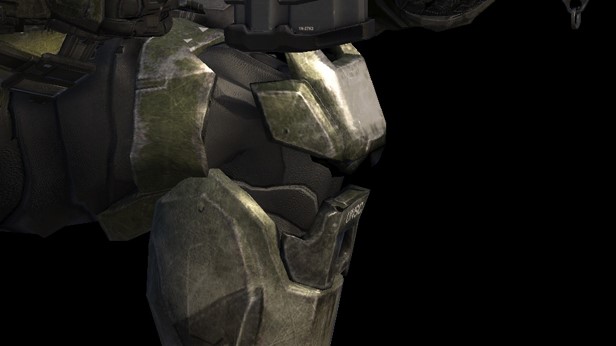 It doesn't have the top bevel that the pep file one has.. also the pep is kinda too simple to look right with the shin.
The knee just needs to be re-scaled because it is wayyyy too small in proportion to the rest of the shin.
scaling the knee was pretty much the same story as the other shin. except because the file includes the shin, the top boot cover and the knee, i had to measure between almost the bottom of my foot to roughly an inch above my knee. Then i just printed the bottom part of the knee.
for the actual knee pad, I took that file and scaled it up 25% which I still think looks too small so I'm going to try it at 30% bigger.

And also, because I didn't mention it earlier, I'm building Jun for myself, Kat for my sis, Thom for my bro and Jorge, Emile and Carter are some of my good friends.
also because they are doing a lot of the tedious work like peping and eventually bondo'ing their own suits this thread will most likely be Jun and Kat heavy to begin with. But I'm going to try to get some good pics from them and see what they found works and what doesn't with their builds, specifically the pieces that are exclusive to their characters.

wow.. so many words for so little progress. I hope you guys like reading.

Division Staff
Colonial Regiment
Community Staff
Holey Laundry list electricknite! That is one big "To Do" list.....even more than mine is........

I reprinted the knees at roughly 33% bigger this time which for me was 600mm, I think it's a good size.
I redesigned the lower Para knee to match the game better.

I must've hit my head or something though because I printed the thigh way to freakin big..

Small development in the plan:
After attending a small expo at the military museum in Calgary, I was talking the other 405th-ers. and this may be obvious but for 4 of us (Jun, Kat, Emile and Carter) I could use armor that is the same size so Ill probably just make molds for this set and cast 4 sets of armor. It'll make the pep time go down and in the end the armor wont be quite so heavy.
I'll need to get good at matrix molds however.... which is daunting...

Small development in the plan:
After attending a small expo at the military museum in Calgary, I was talking the other 405th-ers. and this may be obvious but for 4 of us (Jun, Kat, Emile and Carter) I could use armor that is the same size so Ill probably just make molds for this set and cast 4 sets of armor. It'll make the pep time go down and in the end the armor wont be quite so heavy.
I'll need to get good at matrix molds however.... which is daunting...
Click to expand...

Pep work is reaaallly nice and clean. good job! Too bad that thigh is too big...It seems as if you printed it at 100% spartan scale! At least you'll have some practice with the next pair of thighs. Haha.

And matrix molds...yeah, sounds intimidating. I've never done molds before, though I have several 3D printed props that probably deserve casting...However, I've always been intimidated by rubber prices and the thought of screwing up (with expensive silicone). I look forward to that, though. I'm always eager to see people do things I haven't tried, especially when I'm intimidated by said projects.

And the bobloheaddeshness! Haha! It happens to us all...at least once(some of us a lot more than once)

Division Staff
Colonial Regiment
Community Staff
Well, mblackwell1002.....technically it isn't bobloheaddeshness.........thunderthigheshness would be closer to the mark..........and BTW, I'm cutting you off from any more stickers......

Canadian Regiment
I'm back!
I've rebuild these thighs like 6 times..

I slightly modified the pattern because according to the reference it looks to me like the side is indented compared to the pep file that has it sticking out.

My main concern with them right now is actually whether they're long enough.. they fit around my leg fine but they're a little short. my hips are about two inches higher then where the top of the thighs are in the picture..
let me know if you agree.

Pacific Regiment
Washington
They look great. It should be fine since there is still the cod, even though it sits high 9n the hips. What you could do is have the cod sit slightly lower and then still have enough room to be flexible.

Canadian Regiment
Voren Marr Thanks! I do my best.

Thom A293 Its possible but because I'm building Jun and I am a girl I have to come up with a way to minimize my hips. If I put the cod lower it'll accentuate my hips and it'll look too feminine.

Pacific Regiment
405th Regiment Officer
Washington
Community Staff
I think the mold idea is stellar. Makes your goal much more obtainable. There's a tutorial on here that should help. I'll try to dig it up for you.

I personally think the shins/thighs are close enough. The game model seems unattainable to me, physics wide. So that's why I think you're close enough. What's more important is does it look good on you (I think yes) and now that it is your cast, does it fit everyone else?

Canadian Regiment
alrighty, Anyone know if I can stretch a file in pepakura? I have the full version. I know how to resize, but I'd like to stretch it..

Pacific Regiment
405th Regiment Officer
Washington
Community Staff
Not possible. CommanderPalmer had a great suggestion on scaling to one size (smaller side) and then just adding your own paper into the part you want to stretch out. Or, if you want to get into ArmorSmith Designer I know that you can stretch the 3d model, but I have never tried to print the files.

edit- here is where she explained it to me:
Duke's Custom Reach Suit Pep with Bruteshot (with Step by Step) +photos!! *WIP

Canadian Regiment
PerniciousDuke ya, I read that when I was creeping your thread haha. I could do that but in my case I need it taller.. which is more complex because of all the bumps and stuff. I'll try it though.
You must log in or register to reply here.
Share:
Facebook Twitter Reddit Pinterest Tumblr WhatsApp Email Link