Props Repurpose grenades ... or how to beat the high price of Con Beverages

European Regiment
Hi guys, not really a tut or WIP and actually I wasn't at all convinced I'd post it in the first place, but just in case I was not the last Captain Obvious in the line when it came to this idea :

Not many words needed, the pics speak for themselves.

So print and cut

First fit was rater good, but the top screw was too visable

So I slightly redid that one, fits better now.

H5 version is coming too.

If anyone is interested, I can put up the pre-cut STL's for download. I'm still working out a problem to do the same with the H5 grenade, and that one should be usable with those more readily available "foldable drink bottles", so I'll add that solution to this when done.

In terms of print parameters, I didn them using PLA, 0.2 Layer, 3% Infill. Then I cut out the infill I didn't need, fitted until the bottle stayed in, and did the same thing with the screw cap. Currently toying with an armor mount system using magnets. There's enough space for that in the grenade.

Once that is done : Ready for paint, armed for Con. 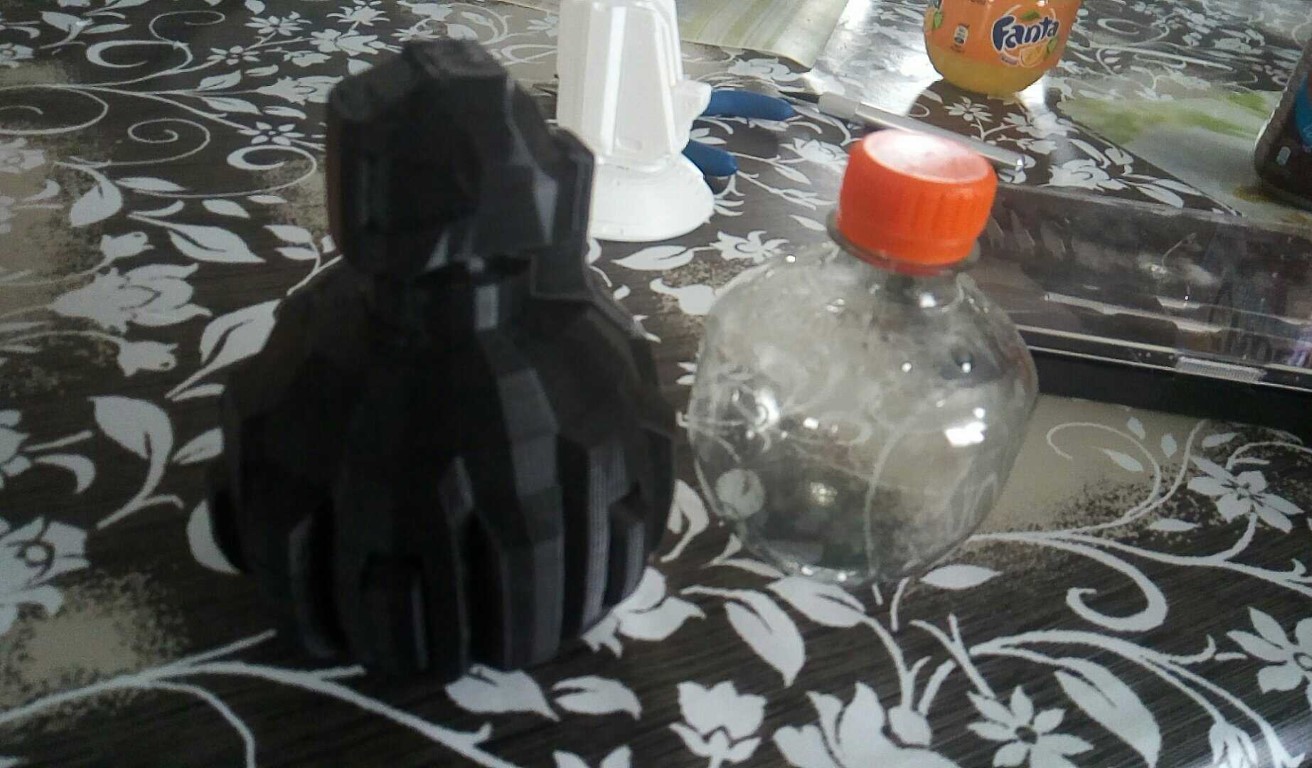 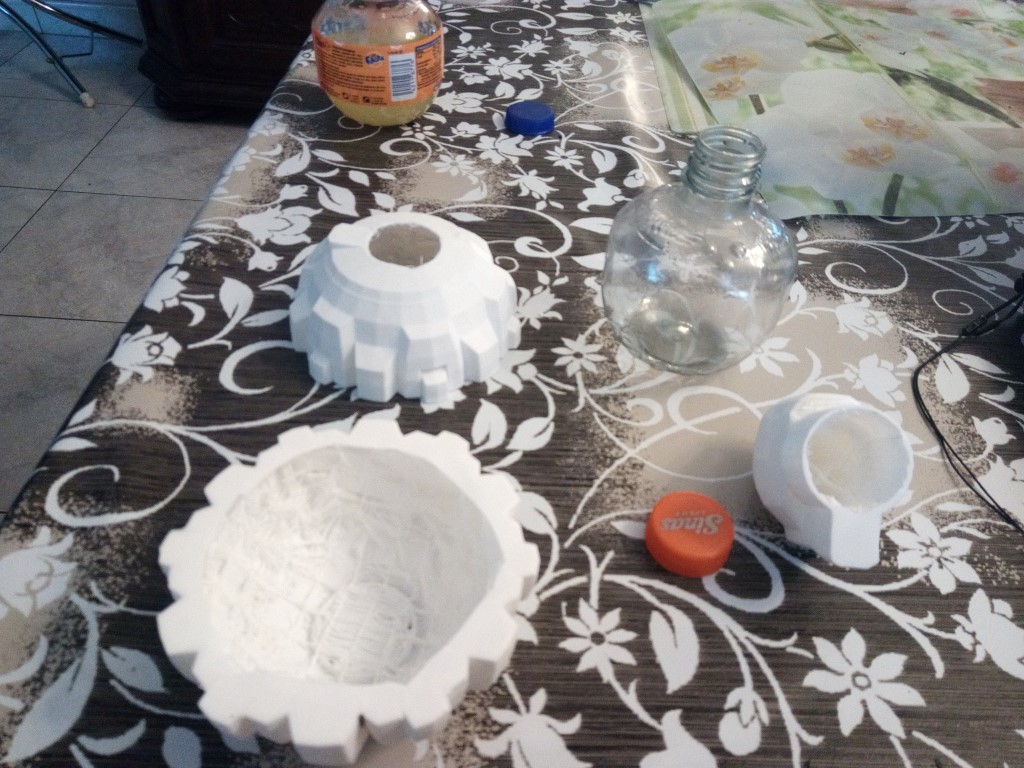 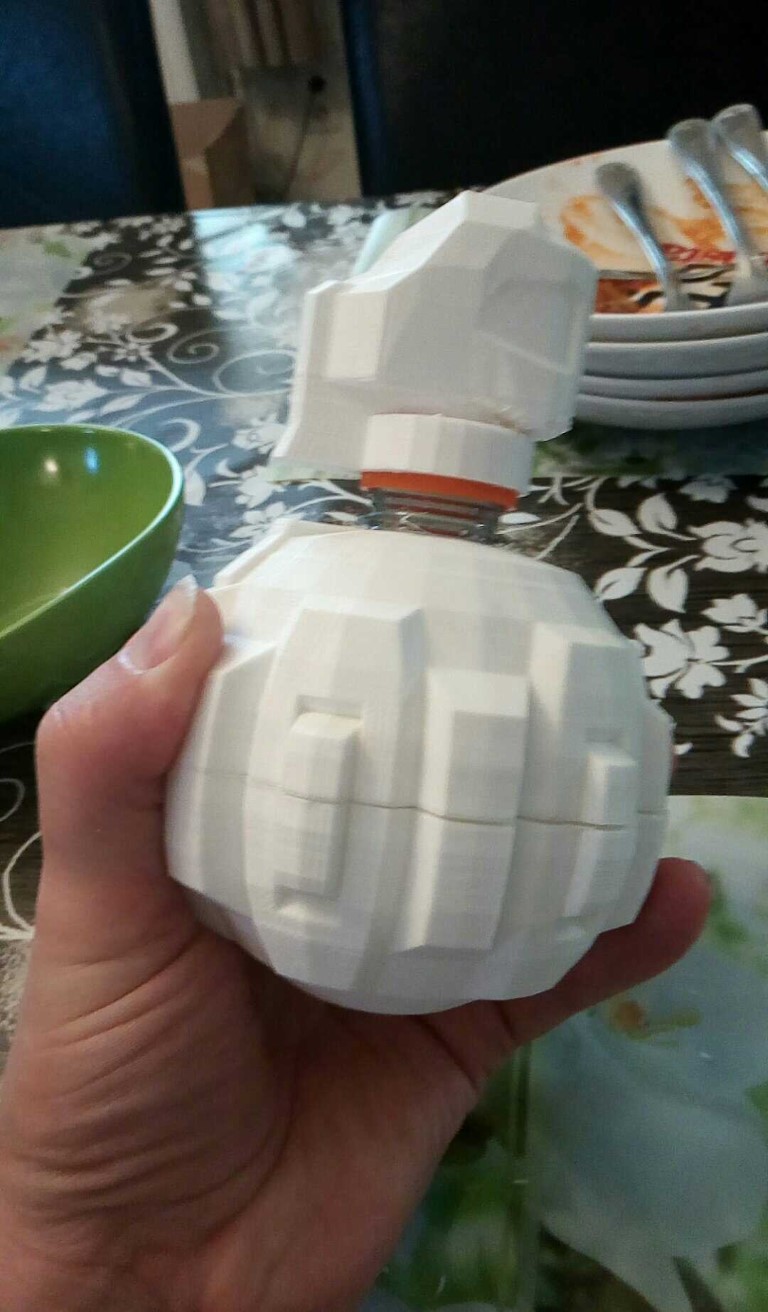 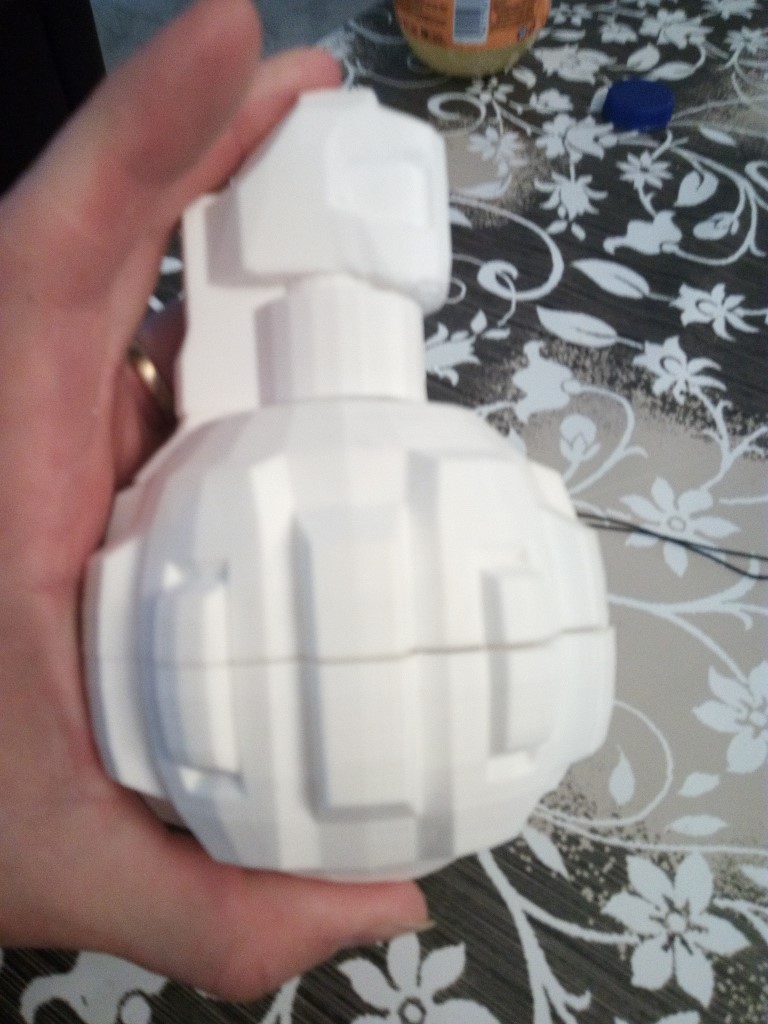 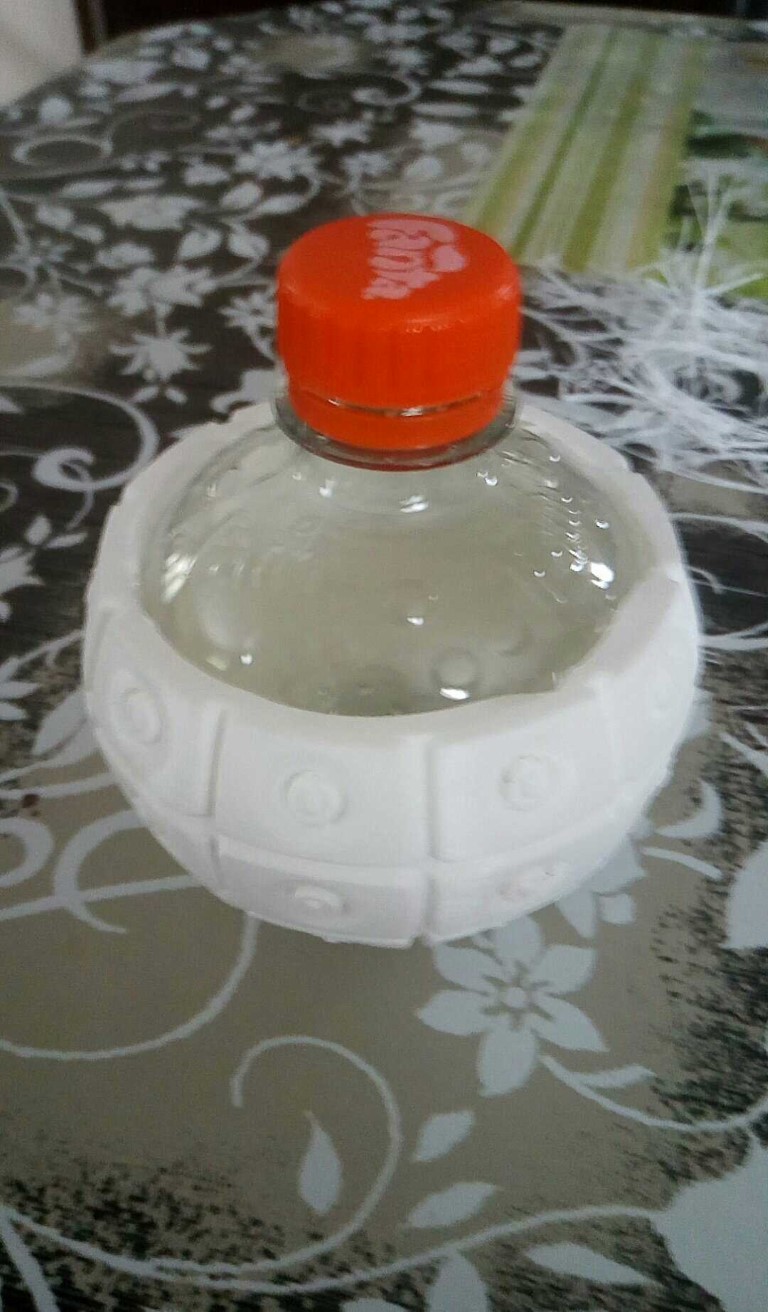 Pacific Regiment
HA! I use the same water globes for My plasma nades

Winning I love it !


Also, how many of these are you going to do? How will you keep them on the armor? :O
K


Anyhow, I was thinking 2 for each person should suffice.

That gives you half a liter of stuff to drink. More than that and most people get into another type of trouble on cons very soon. A question of input and output, so to speak.

I've no problems paying for something to drink on a con, but sometimes the prices are really a bit over the top, and from experience even if they sell you a bottle that you can close instead of a can, you're still having that "what the f_ck do I do with that can in one hand, my prop in the other, and well, your helmet in the third (?)" while it's not empty. So you drink up the complete thing to get rid of the drink container although you're not thirsty any more, and then cursing an hour or two later over the high prices as you again need something to drink.

With other words, I came up with this not only because I'm cheap, but because I'm lazy as well.

As for connecting them : ideally, magnet mount. But I realise that may not turn out to be the best solution as

A) it would have to hold 250gr of weight which doesn't seem all that much, but it still could become an issue to keep it SAFE while you move. Hence, I'm still playing with that idea.
Also, certainly on crowdy Cons, magnet mounts have failed me more than once as people bump into you ect ect. It may look cool as hell, but ideal, it is not.

B) certainly for foam armors, having an extra half kilo on something like the upper leg parts could become problematic in terms of keeping the armor at its place. Depends on how it is constructed and attached. I keep my leg parts in position due to presure on my legs AND a strap+buckle system, but I know I could do without the strap+buckle if need be. That would be out of the question if it would start hanging on that armor part without added support.

So the more realistic approach on for example my MKVI would be using the belt; left and right rear., some kind of clip system/carbine hook that goes around the neck of the bottle/grenade. I'll figure something out. Ideally, a sort of clip that fits between the two parts of the grenade. I'll probably look into that possibility first. Or one of these extenable keychain things. No idea how they work and if they can cope with the weight, never had one of them in my hands so far.

If other people have ideas, just chime in. On the H5 it could be easier : make a strong, metail splint and let it operate as belt hook. On the Reach model, it's a little bit more iffy.

Anyhow, I'll post how and what comes from this as we go along.

I'll also look more into using these sports-foldable things for later versions as it has become obvious to me these little round bottles (in my case Fanta bottles) aren't as common as I'd thought they were. Them foldable bottles can be had or ordered all over the world.

Wow, that's a really good idea. Might have to borrow it.
P

Pacific Regiment
I have just enough time to make a few for rtx . Would you share the stl?
I

Canadian Regiment
This is pretty cool! love the creativity and inventiveness in this group!
K

For those with a 3D printer, here's the set of .STL's. For those using Simplify3D, I added the factory file as well to use. Not really sure anymore if those were done on the Prusa or on the Delta, so be careful if you just want to use the factory file as it may well be for another type of printer/different type of build bed.

The enlarged top are just 2 combined STL's on top of each other.
I've noticed some slicer have issues with that, so in that case just adjust position accordingly.

Pacific Regiment
Thanks! Ill pop them on as soon as the 2 plasma nades are done...

Pacific Regiment
405th Regiment Officer
Washington
Community Staff
This is a great idea. I've seen others use military canteens, but that is about the only other way I have seen to carry water on you incognito. As for the attachment of these grenades, I'm picturing a thick rubber o-ring around the neck of the bottle that is attached to a plastic clip (like a plastic carabiner) that is then clipped to some strap on the armor. In which case the first print, with the gap would actuality be better because I'm seeing the 3d-printed cap popping off being a potential problem in any other scenario. Also, how are you securing the two halves together? I could see using magnets for that to be effective. As for the bottle, I think you're right, not as common. I'm pretty sure I've seen them in the States for kid's sports drinks where they are printed with a soccor, or baseball, but that's about all I can think of. Our Fanta definitely doesn't come in bottles like that. :/ I bet they could be imported, maybe Amazon. Thanks for posting!

Let us know of any test runs on different attachments, I am very curious. (You too peterthethinker . How did RTX go? )
Last edited by a moderator: Feb 22, 2017

That is very imaginative. Awesome bulid. I would like to get my hands on those files and make a few.
P

Pacific Regiment
What?! Why have I never thought of this? It's brilliant! I'm definitely going to try incorporating this soon.

Pacific Regiment
Oh gosh I never got back to ya after the con....... The gater-nades keept me very well hydrated and worked well!

Colonial Regiment
405th Regiment Officer
this is a great idea.

I can see this being a useful item. I still remember my first con, drinks were highway robbery!!! Most def adding this to my build list. Excellent idea two thumbs way up

Pacific Regiment
405th Regiment Officer
Washington
Community Staff
Hey peterthethinker , would you might taking a quick pic of how you fastened the bottle to your person?
Last edited by a moderator: Feb 22, 2017
P

Pacific Regiment
405th Regiment Officer
Washington
Community Staff
I think I'm going to try using an oversized O-ring that goes under the cap and then clip a carabiner to it. I'm glad to hear it worked for you!
P