Show us where you build!

Community Staff
Division Staff
Canadian Regiment
Whether you build on a kitchen table or are fortunate enough to have a dedicated space, we all have that happy spot in our homes where we get to create.

I am super lucky to have a dedicated room. Working with so many different mediums leaves me constantly battling storage issues but I make it work. The set up in the photos is how it mostly is for sewing. When I'm working on armor, I do the messy stuff in the garage and the non-messy stuff I just cover up a table with a plastic table cloth and get to work! When working with thermal plastics I use a scrap piece of shelving and silicon baking sheets to protect my tables from the heat. When I'm doing really messy stuff like using my bench sander to grind down plastic, I set myself up outside on a patio where it's easier to clean up the mounds of plastic bits. I also have a kitchen island that just happens to be 60 inches wide which is the width of a lot of fabric so I don't have to crawl around on the floor anymore to cut out big panels.

Where do you work on costumes??
T

Southern Regiment
Holy crap that's nice!!!!!!! My work space is currently a cutting mat lol. I have been teaching my wife how to draw, paint, etc so hopefully we will convert a space into a craft center/office soon.

Community Staff
Division Staff
Canadian Regiment
Thanks! I built costumes for a looooong time on my dining room table. I'm very thankful to have what I do now, but I wouldn't give up all of the knowledge I gained from the years of making do with what I had.

Canadian Regiment
(Sorry in advance about the poor pictures, not very good at that kind of stuff)

Here is my commandeered work space! This entrire section of the basement has slowly been coming under my control for a few years now but I've now successfully taken everything from the shelves to the ping pong table.

Here's a closer look at a small part of my Lego collection (can't fit everything onto only 15 shelves) and where I keep all my completed pieces, all nicely lined up and tidy. Also shown is the my shrine of books, collectors items, boxes, lego and all assortments of things.

And before you say it, it's not a kids toy, it's a highly sophisticated interlocking brick system!!!!

Southern Regiment
This looks fun. I'm all over the house because living with multiple roommates keeps things hectic, plus living in the city keeps things kinda cramped.

Here is the Cameo station:

The pepping table with storage:

The bondo and sanding area on the back deck:

And finally, the infamous photo bar, where I stage my black and white pictures. I also do a lot of pepping here: 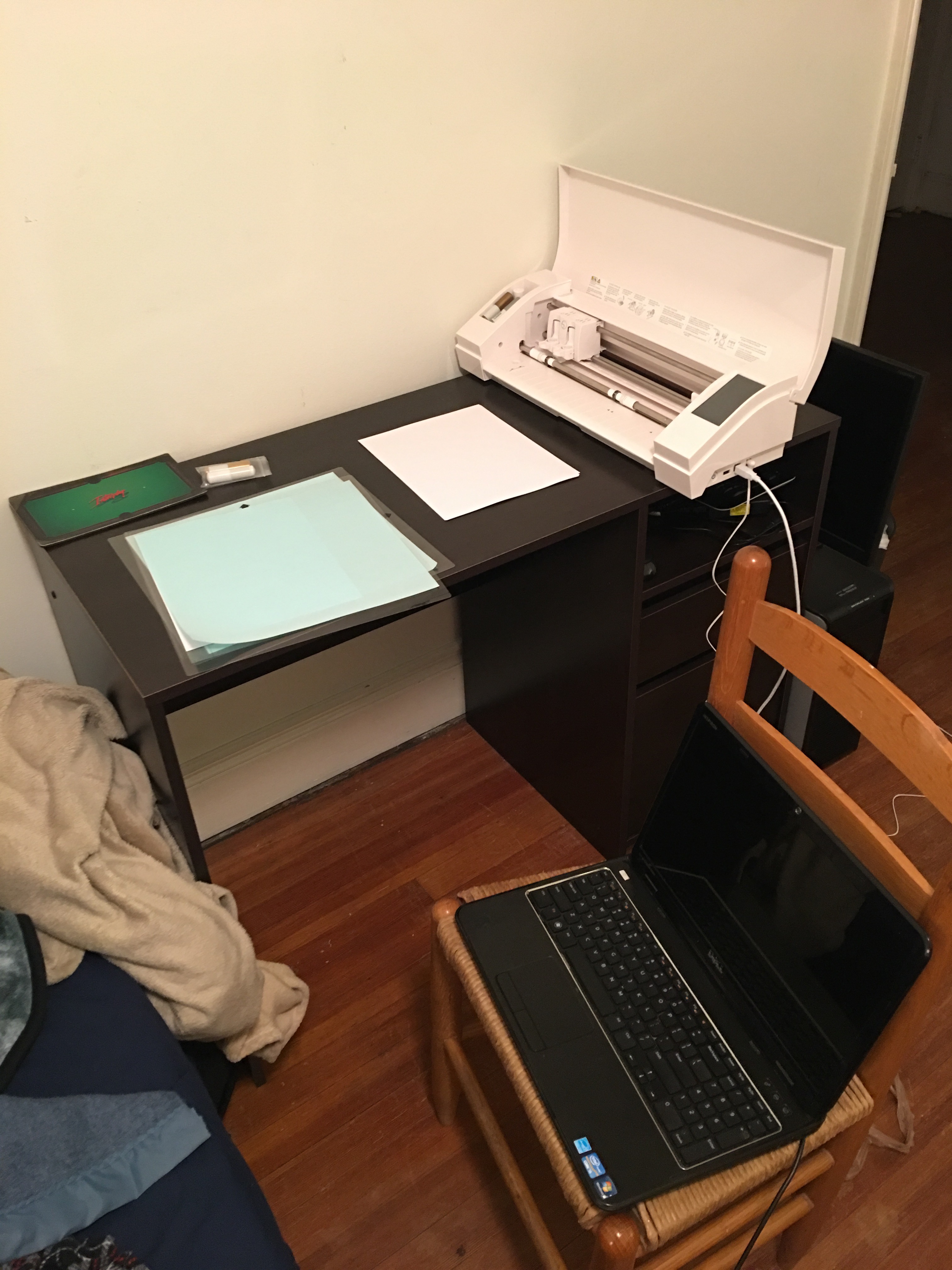 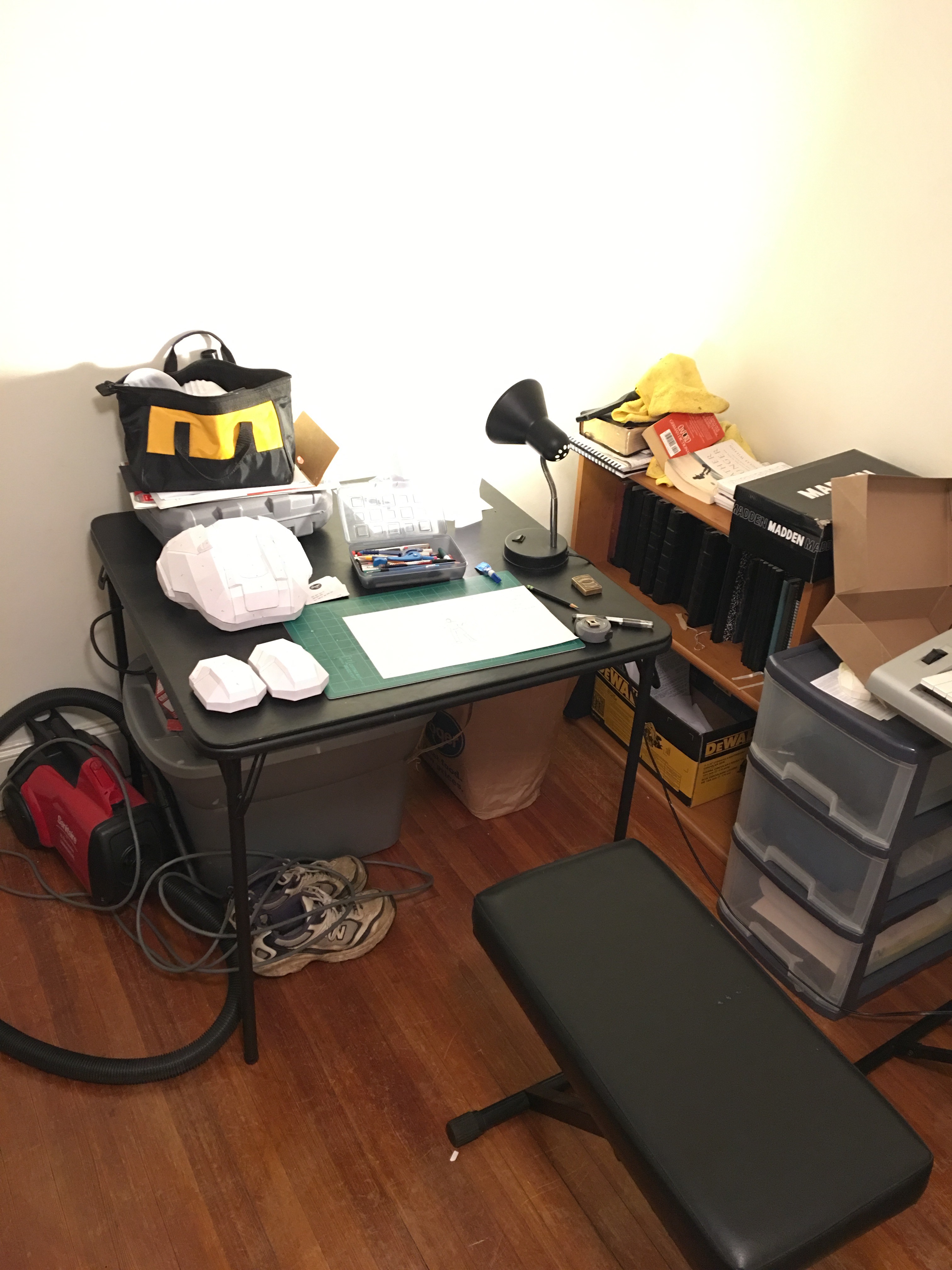 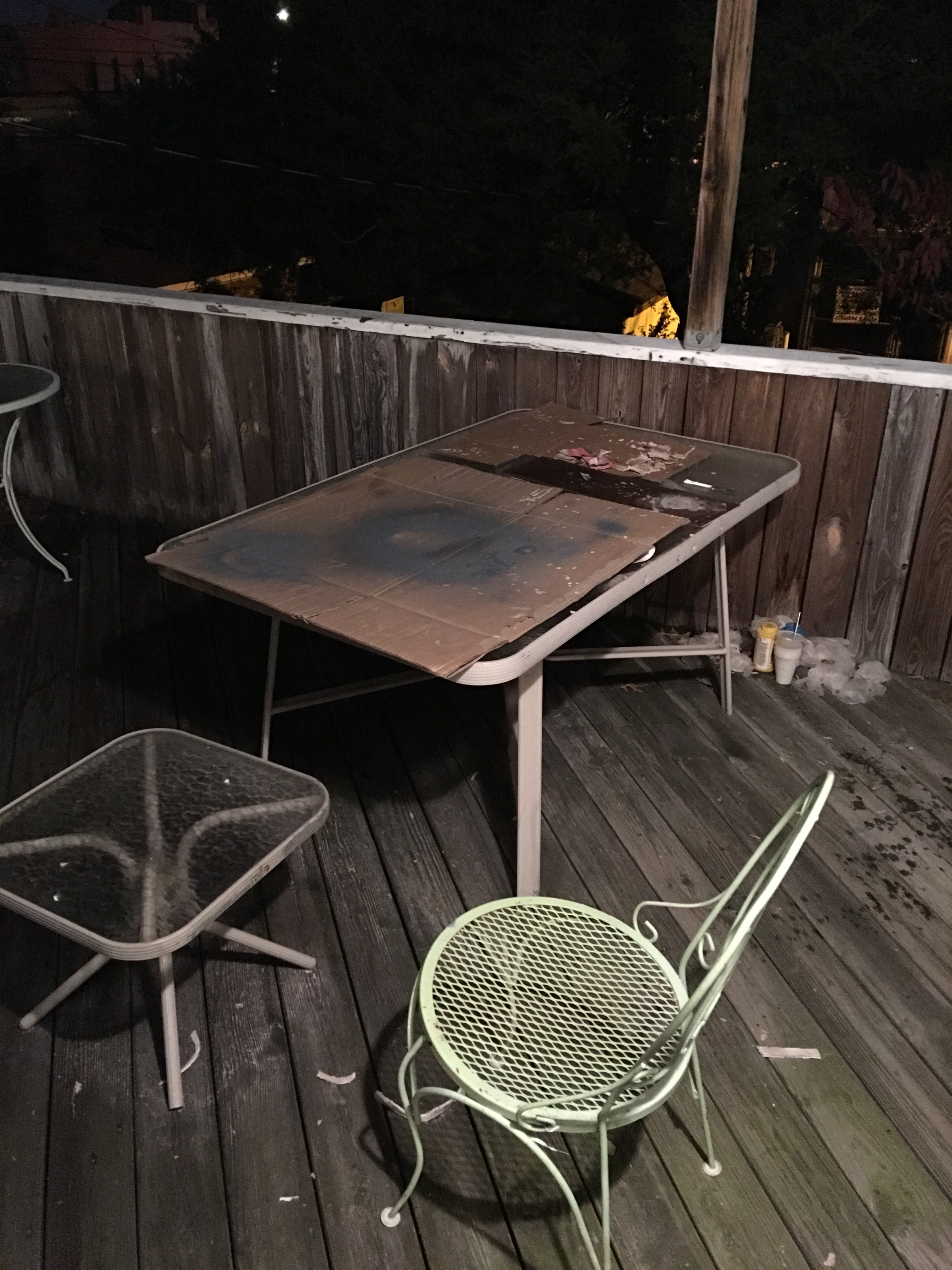 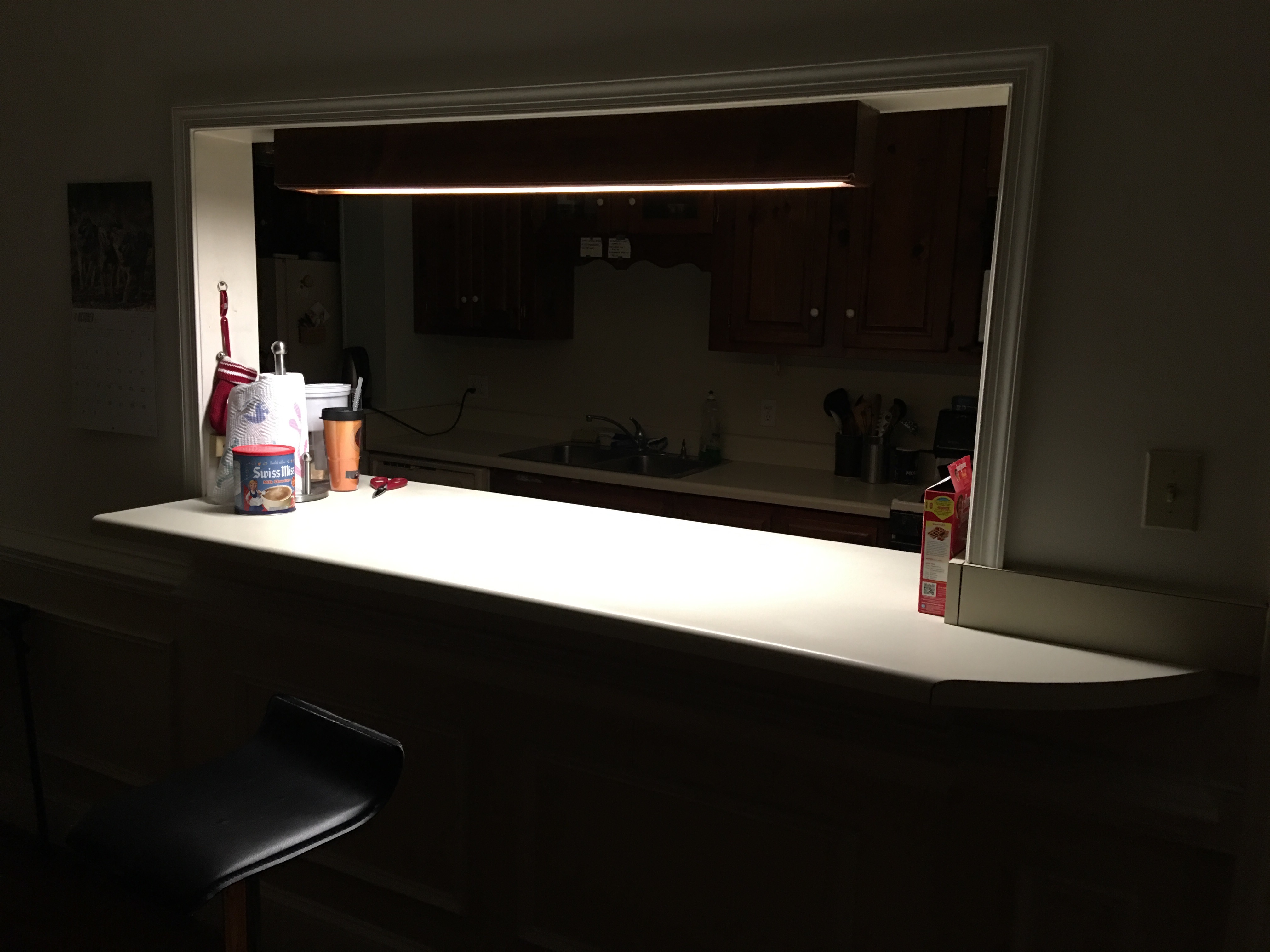 Australian Regiment
I'm super jealous of fangs area
but I still love my 2.5 m by 2.5 m sweat bow
pictures will be added later

Division Staff
Colonial Regiment
Community Staff
Yeah, I'm also jelly of Fangs's work area......a whole flippen room.....I have my work area in the basement so I can work undisturbed.....until someone wants to watch TV or play Xbox that is........I built the den in the basement for the kids and I took 1/4 of it back for myself.....

My fabrication area. This is where I do most of my templates and cutting. My reference pics up on the wall, tools and supplies in the draws, shelf and wall,

My application station. Everything I need to attach what Iv'e cut. Velcro, tape, glue, and additional building supplies. Behind that closed off by the accordion door is my supply room loaded w/ full sheets of foamboard, packs of EVA and other nonsensical items.

I have 2 mannequins, 1 of which my son uses as Nerf target practice. They are just about my size in height but I'm a bit beefier in the middle.

I also have a full shed workshop in the backyard where I do some of my larger and heavier pieces....nothing going on in there right now.

European Regiment
Wow, FANGS! Your working place is beyond beautiful! Really, so big, but everything has its own place. You can see a lot of love is there.


And I'm seriously jelly of all your work spaces. So big, so clean!

I should seriously finally clean my room...
Last edited by a moderator: Feb 22, 2017

Colonial Regiment
Mine used to be my room, then my dad and I cleaned out the backroom so this is the HQ now. We plan on finishing the area in the coming months and I'll deck it out with an awesome workbench.

Community Staff
Division Staff
Canadian Regiment
I LOVE seeing all of the workspaces! Big or small, this is where we spend many happy hours!

I realize I didn't really take a photo of the area I have for my Cricket and Cameo. In the first photo you can just see hints of green behind my large black table with the sewing machines on it. That's the cover on the Cameo and my cutting mat. My laptop sits on top of the grey box with drawers and gets used for both the Cameo and my embroidery machine which is in front of the window. Actually there are two there. My original one is on the right and much smaller. My new beautiful machine is to the left and is HUGE! The largest hoop for that one I can pass over my body like a big rectangle hoola hoop. The old one is a Singer Futura CE-100. The new one is a Husqvarna Viking Designer Diamond.

For those interested, the machine closest to the doorway in the first photo is a Brother cover stitch machine. This hem finishes stretchy fabrics. If you look at a hem on a t-shirt you'll likely see a couple of lines of straight stitches on the front but zig zaggy stitches on the inside. That's what this machine does. Different from a serger. It's come in very handy for professional looking finishes on bodysuits etc. at the wrist, ankle and neckline. The machine under the plastic is my 1952 Necchi. It will sew through pretty much anything, including thicker leather. The one in the middle with the white table attached is my Juki. That's the machine I use the most. It will sew through almost anything. Including me, which I'm sad to say I've done 3 times with that machine. Good times, good times. The last machine on the end of that table is a serger.

I had a room a little bigger than this one in our old house but it was long and narrow, had a few odd shaped parts to it which made it more awkward than this room. Plus it was in a traditional basement with just the small windows near the ceiling. The new house is a walkout from the basement so I get the nice light from the big window which I love.

For the first time ever this room has allowed me to really have storage for all of the little bits and pieces so I can easily find and use them. I'm still sorting some stuff out from when we moved (OMG a year ago now) but 99% of my stuff is now all sorted in bins. The biggest issue still though is, and always will be, fabric. I've been trying to wrap bigger stuff on to bolts created using foam core but I sometimes get lazy and eventually end up with a giant mound of fabric. This years goal is not only to finish all of the costumes I have stuff already for, but to make a big dent in my "I don't know what I'll use it for but it's pretty fabric so I have to buy it" stash.
H

Wow people have workspaces? I can't even conceive of having space to myself here at home...

My workspace happens to currently be wherever I put my cutting mat down and I have to then fight for space to put my stuff around me...
have been thinking of getting a small heater for the little play shed thing we have in the back,as I could very easily convert it into a workspace for myself as no one uses it for anything really...

HydratedFormula said:
Wow people have workspaces? I can't even conceive of having space to myself here at home...
Click to expand...

I can relate. I just spent the past two years sharing a room while sleeping on an army cot. Finally got my roommate married off and have my own space. It makes a world of difference.
H

Godwolfen said:
I can relate. I just spent the past two years sharing a room while sleeping on an army cot. Finally got my roommate married off and have my own space. It makes a world of difference.
Click to expand...

I miss my army bed, I have a choice of either move out or get a car.... Could always get a large van and just have that as my workspace.....

Division Staff
Colonial Regiment
I have to clean up spaces before I get pics posted. All told, between my husband and me, we have a 20 by 30 attached workshop off of our basement that is our primary work location for 3/4 of the year. winter it is to hard to keep warm. Recently my husband moved the basics of the shop, aka his band-saw, scroll-saw, and mini belt-sander, plus a laptop into our basement for winter work. Plans are for him to add a paint hood in there.

We also have on the second floor a 16 by 16 room that is my sewing room, and the home of the 3d printer.

Eventually we will be adding another room of the house as either storage, or another 3/4 year room that will be 14 by 30.


All the joys of living in a house that is over a 100 years old, 3 stories, and was a working farm at one point in its creation. Love having 3 acres of property.
D

Colonial Regiment
All these fancy work spaces! I work out of my garage, unfortunately the lighting doesn't show up well on camera. Only way to get good photographic lighting is to open the door. Even then its iffy. Plus the garage doubles as a storage space, so half the time I'm climbing over stuff.
Still, have lots of nice nooks and crannies to store tools and various bits.

Midwest Regiment
Here's my main workspace. Technically my whole house is, but this is where most takes place
.

Colonial Regiment
I'm actually doing a group of YouTube videos showing us cleaning up our work space, and working on my armor, from now up till Sci-Fi Valley Con...I'll post a link to the first video once I get it up!!

Colonial Regiment
This is our area, it's messy because we started cleaning the other side of the basement where our storage is so stuff got shoved to this side and then I ended up getting pregnant and having really bad morning sickness....we're getting it all cleaned up and organized by Sci-Fi Valley Con in June so it's usable for everyone!!

(Well it's always been somewhat messy, but not this bad lol))