Once you're done designing, cutting, building, painting, and wearing your armor, it's gotta go somewhere to get it back home and to the next con safely. How is everyone storing their gear for transport and between conventions?

I don't think I've seen this discussed yet, but I'm sure people have their own methods based on the sheer number of costumes made here. Right now I've got my ODST set in a very large Sterlite container (the biggest one I own, since the torso doesn't collapse), but I'm still trying to find ways to store my helmet away in an easily-transportable method. It's currently sitting in a cardboard box wrapped in bubble wrap, but that's not really an ideal mode of transport. I feel like it needs more protection than a typical motorcycle helmet bag would give it, but I'm a little hesitant to just buy another plastic tub to toss it into for some reason I can't quite articulate.

I use bins for armor storage and transportation as well. I always choose ones with wheels. The Stanley bins are popular and often go on sale. I have one of the smaller versions and it's great. However, most of my armor is in a cheaper wheeled bin I found at Walmart simply because they are lighter to pick up and heft in to the back of a vehicle. I've also been at events on a rarity that will not let you wheel bins in so while it would still be darn awkward, I could carry this bin for a short distance.

I've started making polar fleece bin liners to help protect my armor as well as little polar fleece bags for each of the smaller pieces if it is an item that could be damaged by rubbing against other pieces.

In that second photo you can see one of my helmet bags. I have one for not every helmet I have but certainly most. They are padded with a little foam. Those that have their own bag, I usually keep the gloves/hand plates, neck seal and/or balaclava and elastics for my hair. The helmet usually sits on a shelf when I'm not using it. In most cases, the helmet doesn't fit in the bin with the armor but I've never had any issues transporting my helmets just in the bag. Of course, I'm careful with them and will sit them on the seat beside me in the car or on my lap. I don't put them in the back or trunk with the bin in case things shift too much. The bin liner just gets folded over the top once the armor is all loaded and then the lid is attached. The little pockets on the side are handy for small bits when I'm getting ready. Makes them easier to get at the less mobile the armor I'm putting on makes me.

Next up for me is to create lists of items that need to be in each bin and in some cases the reminder to put your dang knee armor on before your boots. #forgetseverydarntime. I may have gone to my last 501st event without the harness for my jetpack and because my jetpack is attached to the back plate, I can't wear the costume without that one piece. Boo.

FANGS said:
I've started making polar fleece bin liners to help protect my armor as well as little polar fleece bags for each of the smaller pieces if it is an item that could be damaged by rubbing against other pieces.
Click to expand...

This is some next level stuff right here.

Southern Regiment
Wow, I just used the big plastic ones but that's cloth lined awesomeness, kinda jealous I didnt think of that.

Midwest Regiment
You can go super next level when you can sew.

I only have one storage tote with wheels, so at home I put my gear in other storage bins and stack them on the unfinished side of my basement leaving the rolling one free to be loaded up when needed. I lined my rolling bin with upholstery foam for padding. In the very beginning, I just used an old hockey bag I had lying around to get to a couple of local cons. Provides zero protection to crushing, but it works in a pinch.

ZP180 said:
In the very beginning, I just used an old hockey bag I had lying around to get to a couple of local cons.
Click to expand...

Someone on the discord yesterday said something about this mythical hockey. I refuse to believe it exists, as well as snow.

TheBraus said:
Someone on the discord yesterday said something about this mythical hockey. I refuse to believe it exists, as well as snow.
Click to expand...

This is an actual song?!?!?! I thought this was a few verse chant that people would sometimes sing, but this is actually a two minute song. I am amazed XD

Now to contribute to the thread, I carefully stack my foam armor in a big bin like everyone else, but I also put my helmet in there. The armor being foam, (hopefully) wont get damaged and they also act as a sort of cushion for the helmet if something should happen

That polar fleece liner is next-level stuff. I got into Halo costuming in large part because I don't sew, so that may be out of the question for me. Might be worth looking at some other options with a similar effect, though.

I like that idea though, since my other concern besides abrasion damage is paint degradation damage. Back when I used to do Fire Emblem cosplay, I threw out at least one armored breastplate because the clearcoat I used degraded in my closet and then began to stick to the bag I had it in. By the time I got it pried off, it was toast. I haven't clearcoated my ODST gear (in large part because my base paint is mostly black wash over gray paint, so any sort of wetness runs a risk of damaging the final finish, as I discovered the first time I tried to clearcoat a panel), so I'm hoping I won't have to worry about it, but I try not to put painted sections touching other painted sections if possible. I'm wondering if there's maybe some non-reactive paper or similar I can use that'll give me a little more protection, on top of the dessicant packs I throw in every bin out of habit.

As far as my helmet goes, I found a 13x13x13 fabric bin with a lid at Target today, so I dropped it in there and it seems to be doing just dandy. Still wrapped it in bubble wrap and padded the bin with old grocery bags though; can't be too careful. Might have to invest in a lined helmet bag to go inside the bin later.

Community Staff
Division Staff
Canadian Regiment
I've used hockey bags as well and I've also done as you do, ZP180 and just have one bin with wheels and switch whatever costume you are taking with you in to the wheeled bin. It is only because I found the bins I have now that stack so nicely and have wheels and are reasonably priced that I've gone the route of having a wheeled bin for each set of gear. Of course now I have to think about ways to make the outside pretty so it identifies what set of gear is in there, although typically, it's always going to be the bottom bin I need. haha

As for the sewing part, there are lots of things you can do that wouldn't involve sewing. You could use one piece of fabric and not worry about the ends. No sewing involved. Or you could pin or glue the sides in. They don't have to be structurally stable since you aren't wearing the fabric or using it to carry anything. You could also line the bin with cut pieces of foam. Options! 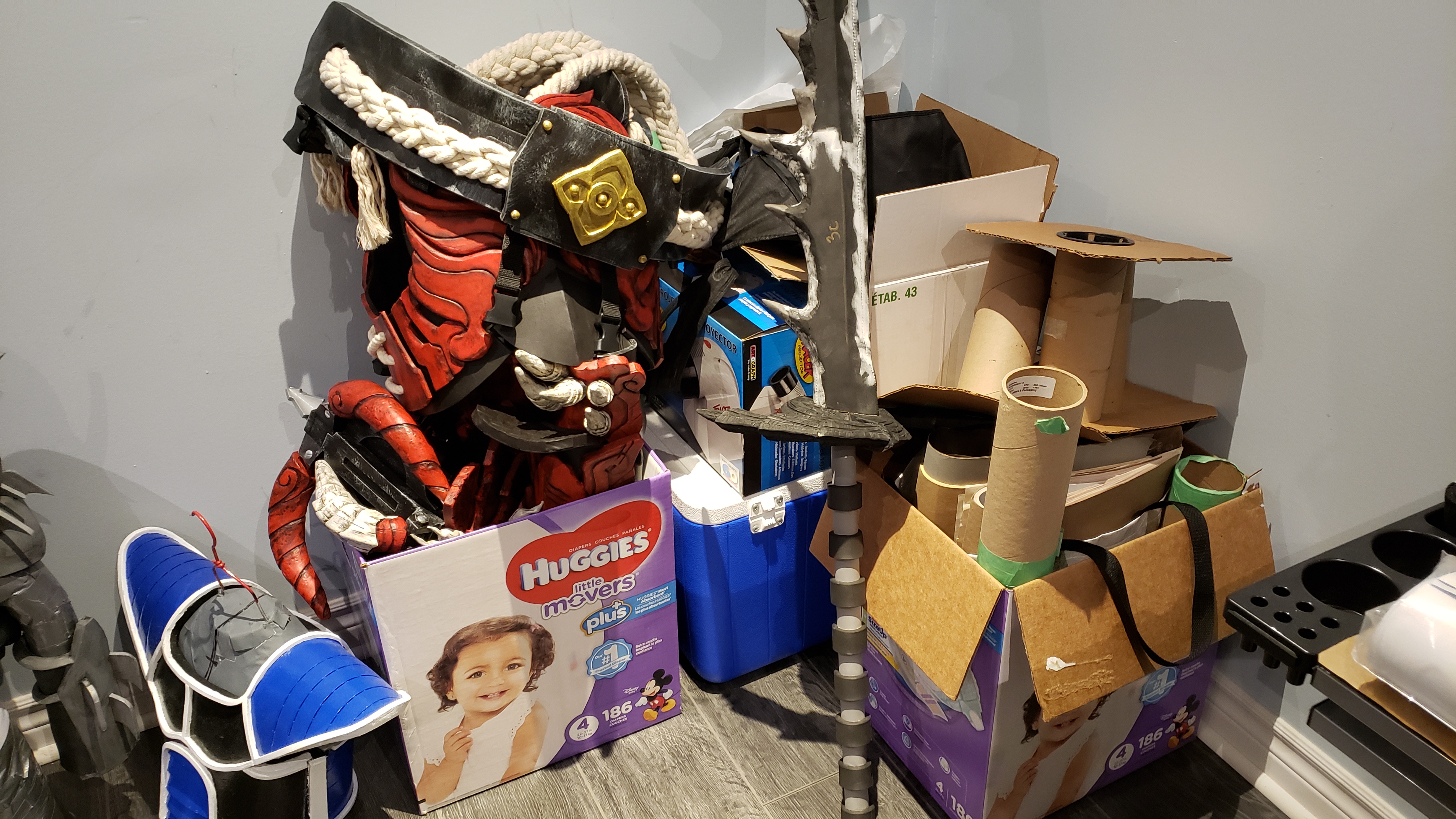 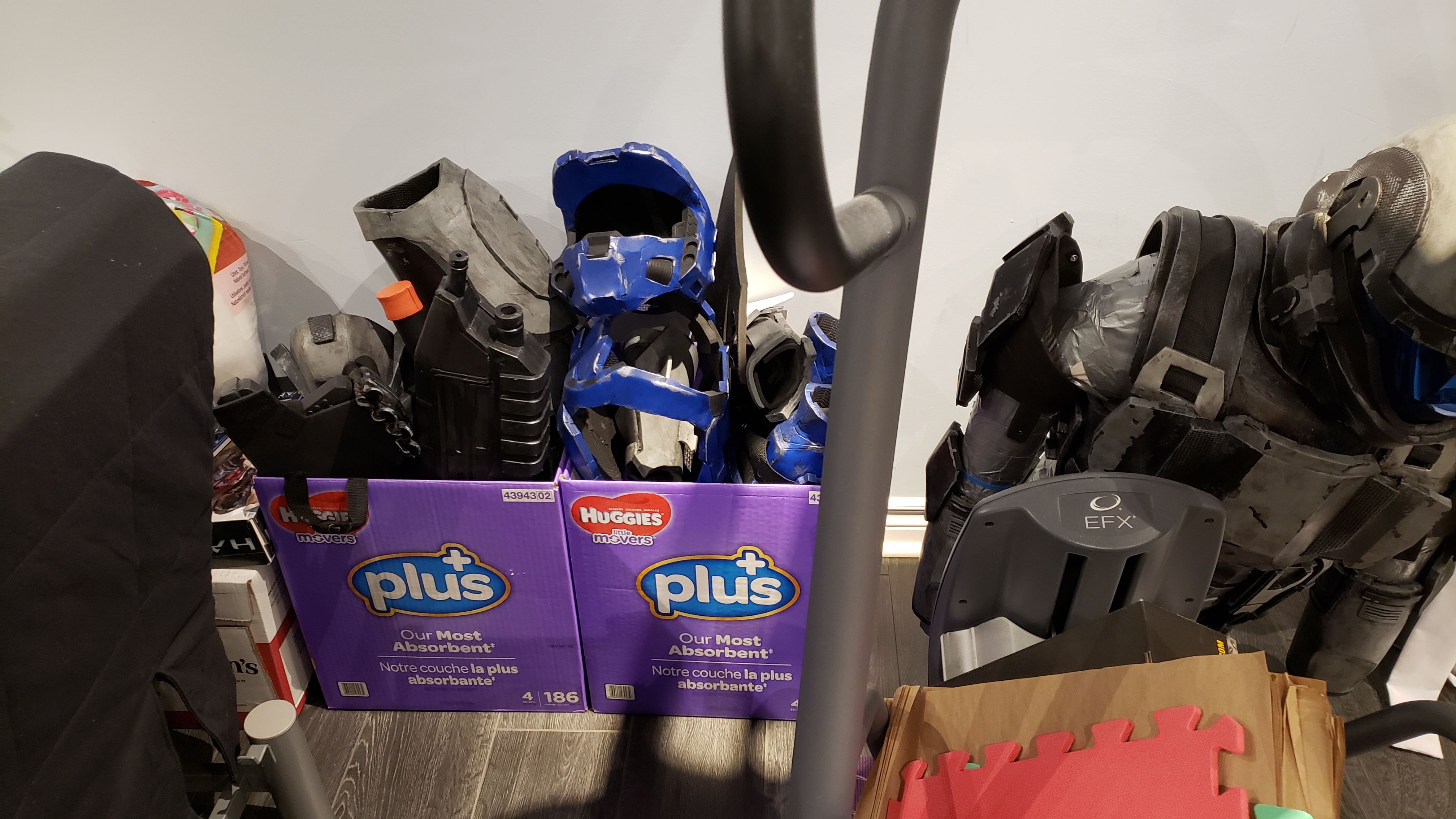 Can anyone tell what my preferred storage containers are? I figured, why spend money on boxes when I get a free one after I finish with the diapers.

All those parts rubbing against one another gives me anxiety.

I am really thinking about saving up and getting a Zarges aluminum shipping crate to hold all my Halo props. I just watched a video from Adam Savage about how he customized one for his Captain America costume, and it looks so official.


xXDashIVXx said:
This is an actual song?!?!?! I thought this was a few verse chant that people would sometimes sing, but this is actually a two minute song. I am amazed XD
Click to expand...

This isn’t a mere song, this is an anthem, it is a way of life... for proof, not only do I transit my Batsuit in a hockey bag... I store it 365 on a hockey gear airing out rack for display purposes. (It is a little hard to tell, as it is fairly well covered).

For my odst armor I use one of the large like 60 gallon rolling tool storage boxes from kobalt and had my helmet in a rolling suit case with some other cosplay with masks in it. Now that I am building a halo mk6 set I needed to add a second box to hold a couple of parts since its 3d printed and doesn't have any give to it and I bought one of the rolling foot lockers from walmart to hold the extra pieces as well as mine and my partners helmets. My partner's agent carolina fits in 2 of the same foot lockers mentioned above except her helmet. The foot lockers were like 20 bucks a piece and don't take to much space in a foot print while traveling and fit nicely on hotel luggage carts.

Australian Regiment
I simply just use a suitcase. I pack a butt load of bubble wrap, towels and use my clothes to help with padding. Luckily if there's one thing I've been blessed with in life, it's the ability to rearrange things to fit in spaces.