I'm in for the weekend. Anyone else here testing right now?
A

Mountain Regiment
I've been wondering how you test it.
H

there's a reason some of us won't be playing skyrim
A

Midwest Regiment
EDIT - For some reason, this made 2 posts.
A

Midwest Regiment
Ive been in for a while. Its a great game, but I dont play it much cause I dont have anyone to play with. I was hoping to get 4 people signed up to my guild, but so far, its just me. Guild testing is starting soon. And that bums me out even more about playing lol.


ACDCrockr209 said:
I've been wondering how you test it.
Click to expand...

Make an account at SWTOR.com and there are links to the beta app in your profile. If you cant find it, I can provide more help.
F

Arioch said:
Ive been in for a while. Its a great game, but I dont play it much cause I dont have anyone to play with. I was hoping to get 4 people signed up to my guild, but so far, its just me. Guild testing is starting soon. And that bums me out even more about playing lol.
Click to expand...

Holy $#!1, Arioch. What's your account name and server in the game? I'll see if I can join up with you this weekend!
S

I love Bioware.
A

Midwest Regiment
My account name is AriochX, Im not sure what server. It just assigned me one. Ill see if I can figure it out and post it here. My guilds name is The Devil's Fist. We used to be a hard core group of in game bounty hunters in an old space sim. I love my guild, all my members are gone and Im looking to rebuild.

EDIT - There was only 1 server when I made my character. Now I am reinstalling due to an outdated client...

They wiped characters since my last log in. Let me know what server youre on and Ill make a new one there.
F

Well, ladies and gentlemen, this is going to be a treat: Everyone that signed up for beta testing before November 11th is invited to the Weekend Beta Stress Test Thanksgiving weekend! Emails with RSVPs went out today, and you can start downloading the client now. (If you played in the beta over Veteran's Day weekend, you only need to patch the client.)

Hope to see everyone out and about on Friday!
S

I'll be there! Wonder if they wiped the servers clean for this test... with my work schedule it took me for ever to level up... frakking graveyard shift.
M

Midwest Regiment
I made a sith character on the pvp server last night and got few levels. The servers have been cut down to three so Im betting there was a wipe. I know my old character was gone, but its been a while.
G

ive been selected for weekend testing too
i was practically jumping around when i got the email, cant wait till the weekend
whats the graphics and animations like arioch? Does it get stale after awhile or is it varied enough to keep you guessing?
A

Midwest Regiment
Im playing it on an almost older laptop and had to turn the graphics down, but its still a good looking game. It was really nice looking before I turned the graphics down though! The game does still have a little of that "cartoony" feeling to it, but you dont notice it after a little while.

The animations are about what youd expect for this sort of game with a few nice surprises here and there that Ive seen in some of the special attacks. Good animations overall.

BioWare has managed to blend a TON of storytelling/movies/decisions into the NPC conversations that work very nicely together! Add to that a meter to track your light vs dark side decisions, the fact that your decisions make a difference in what happens in the game, and it all comes out thumbs up from me! Im very impressed with what theyve done here. And they have captured the feeling of Star Wars somehow and it just sneaks up on you through the gameplay.

I played for a couple hours last night again, and theyve improved it from the last time I had played. I think this is going to be a decent hit for BioWare.

Ill see if I can post some screens or maybe a video of gameplay for you guys later.... 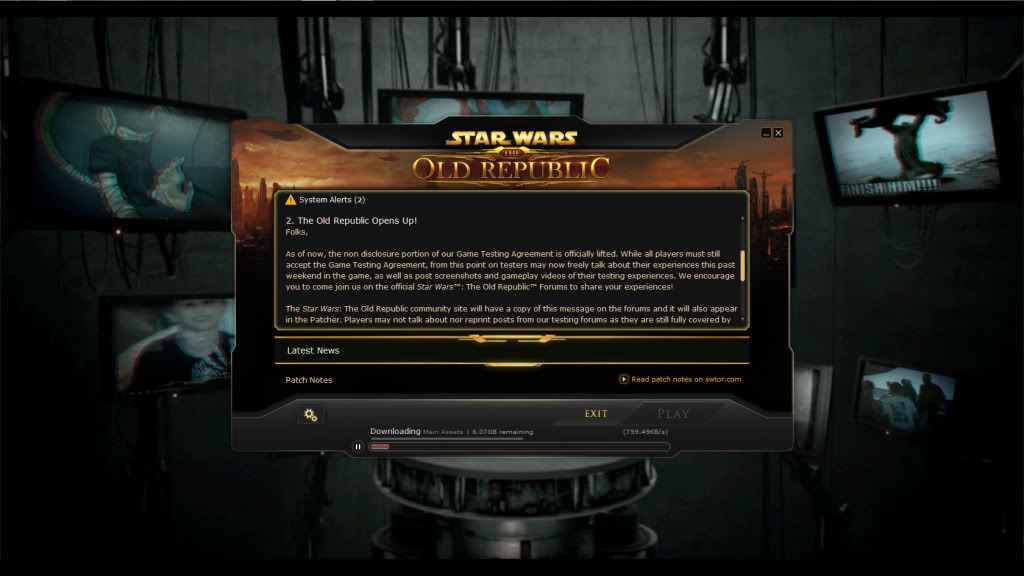 If you cant make it out, the NDA is lifted.

My session starts with the first batch at 11AM EST on Friday. As I'm poor, I won't be out shopping that day...but at least I have a great excuse not to! See you all on the servers! I'll probably be rolling another Republic Trooper, hopefully my character name isn't taken by then.
L

I'll be on tomorrow after I grab my new LED tv, as I managed to get another weekend invite since I played a previous weekend. I didn't get much time with it last go around because I was playing the BF3 beta the same weekend. I think I got to level 10 with abounty hunter, and I'm not too sure what I'll try this time.
A

Midwest Regiment
OK here are some clips I recorded early this morning. I should start off saying that the above clip of the Zabrak was taken with the graphics turned almost all the way down.

This next one is the graphics turned half way up -


This one is with the graphics all the way up -


This is the character creation process -


And after the mission, I turned the graphics up so you can get a glimpse of one of the outside worlds on my crappy laptop -

that game is beautiful on full graphics!
sooo excited to play tomorrow
D

I'll be on Saturday (26th)...if this download will ever finish. I had to free up some space on my drive. A terabyte fills up so fast these days :rolleyes
G

im so glad my test starts today
ive been waiting for so long for this game and now i can finally play it!
does anyone know if you can get the havock trooper armor from the trailers in-game?
You must log in or register to reply here.
Share:
Facebook Twitter Reddit Pinterest Tumblr WhatsApp Email Link