Hello everyone! its been a very long time since i've posted a thread on here and I'm looking to get back into armor and prop building. Recently I build on of Sean Bradley's odst helmet kits ill throw up some picture of that in another thread later. Anyways I'm looking at building a kit from henchmen props, the Jack Cooper TitanFall 2 helmet. i have some plans right now for how and what I wanna do with it. However i would love to hear from the community with ideas or advice on this project!

When TitanFall first came out i got the Vanguard edition because i love the helmet, after receiving it though i was a little disappointed with how the helmet was produced seemed very flimsy and after it fell of my bed (only about a foot) there was some cracking in the helmet. i was able to repair it and decided to sell it to a friend. The other issue i had with it was that the thing was huge on me and I'm a fairly skinny guy with about a 23" head. I did however like how the visor and lights worked on the helmet. I'd like to be able to do the same with my own helmet but keep the switched or buttons in only one or two locations. my odst helmet i used only two switches that control some Green detail lights and some white "flashlight LEDs.

For the TitanFall helmet i would like to use Fans to keep the visor from Fogging up as i have some problems with my odst helmet. i would like to use a total of 4 fans two in the front and two in the back. I would also like to line the inside o the visor area with a blue LED strip light like something you used to be able to find at Radio shack (Rest in Piece) to give the illumination like in the game and the collectors helmet. Lastly i would like to put a set of speakers inside the helmet to beable to hear over then fans and what not and use a small microphone or something like that so i would be able to hear people from the other side of the helmet and maybe put some speakers like some of the 501st use so talking back isn't such a pain and i wont have to yell back at people i want to talk to. I would use the top/front of the helmet where it raises up to help store the power for all the electronics and keep them out of the way. ill post a picture of the helmet and what I'm planning down below. any advice would be very helpful being that i am still very new to prop building and installing electronics. Thanks everyone! 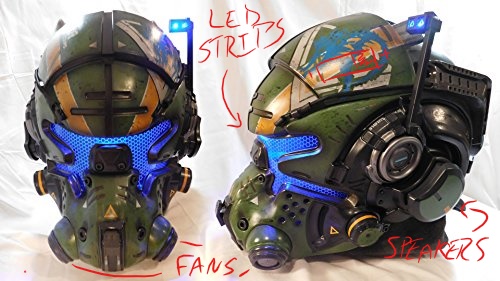