Urgent Distress Beacon: Request for Assistance at Tsukino-Con Victoria BC

I've been approached by the convention with the basic premise that another local convention went and cancelled, is dropping their industry table and they want it filled with cool cosplayers instead. This is where you guys come in.

If you'd like to have a free weekend at the convention with an industry pass, come hang out in Halo armour and talk to people about our awesome community I'm looking for any and all members to join me. This is super short notice, I found out this afternoon (Wednesday) for a con starting on Saturday. My house is already a nerd haven for the weekend so we can acquire extra air mattresses and hard liquor so the only cost to you would be travel.

If you're interested, give a shout in this thread or shoot me a message to my inbox.

The beacon may not have been picked up by anyone on the forum but that didn't stop me from having a good time at Tsukino-Con!

On Saturday I ran "3D Design: A Primer for Cosplayers" which was an hour long talk and demo about the basics of 3D printing technology, what sort of considerations to have when making props and armour and then a demo in TinkerCAD, SketchUp and Fusion 360 to design a quick model that I had a load of sitting around. After that I hosted the "Cosplay Rock-Talk" where a group of cosplayers that I both love and respect all with different specialties sat down as a panel to work through planning a build (Mipha from BotW) and then helping audience members with whatever builds they are planning.

Sunday was the day I started a holy war.

Monday was casual ODST in PT gear day so that I could still be in costume and rip off parts to carry things around during tear-down of the con and also participate in my favourite panel "Panelists Present Pen Pineapple Pen Panels Prepared by Panelists Panel Part 2" which can include absolutely anything and is always an absolutely glorious mess of chaos that sometimes needs extreme physical activity. 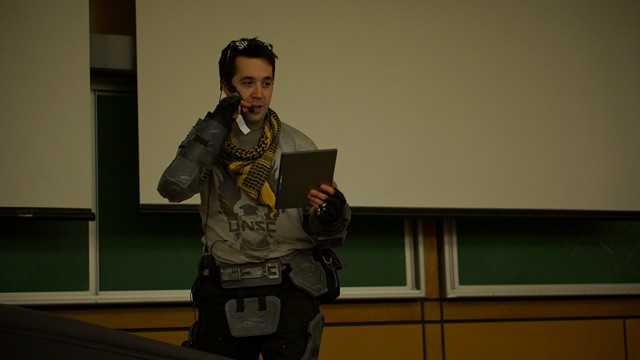 There was a few other Halo nerds around the con and I smooth talked a couple into checking out the forums. Hopefully there won't be any last minute surprises at cons in the near future where they say "Hey, there's two days until the con, do you want to run a table?".

Capital City Comic Con and CoVaCon are the next ones on my RADAR, I'm running events at CoVaCon for sure since I'm a cosplay guest there and am still waiting on word back if I'm presenting a panel at C4 but look forward to a status report on them in the next month.

Sounds like it was a blast! Although you got me curious over this holy war you've begun... lol

BlazedStarbon said:
Sounds like it was a blast! Although you got me curious over this holy war you've begun... lol
Click to expand...

Long story so buckle in, there was an odd number of events (99) in 2013? and I made a joke about running a Church of Shrek.

Fast forward five years and here we are with a joke that's bordering on beating a dead horse but people still love. The Shrekening is in the 10AM Sunday morning death slot of a convention but routinely pulls ~150 people in which is about 10% of total attendance.

Anyone who was entered into the Cosplay Contest was unable to attend the annual service due to contest prejudging. They made their choice to turn their back on the Ogrelord. Knowing this I wanted to incorporate it into the event somehow since I write the panel every year while drinking the night before allowing the most dank and recent memes, so while hung over at 0630 Sunday morning I had the great idea to add a Crusade to the service. Everyone who was unable to attend The Shrekening was excommunicated and now a target of our trolling war against the heretics. Our rally cry was simple.


"My layers are many"
"My breath is foul"
"In the name of the Ogrelord"
"DEUS VULT"
​
A Crusader Champion of the Ogrelord was crowned and given a VIP pass to the convention for their service to the cause and they led a contingent 150 strong into the main stage where the cosplay contest prejudging was being held. Their excommunication was declared and All Star was chanted to disrupt and inform them of their misguided ways.

Since then anyone who talks even remotely negatively about Shrek or suggests changing times of the event on social media has been met with a flurry of short comments including "Excommunicated", "Heretic", "Deus Vult" and "Shrek is Love, Shrek is Life" and the positive comments have been met with promotion to the rank of Bishop, Cardinal and other goofy titles.

Canadian Regiment
Oh man, I would have gone if I had ever followed through on some armouring and, you know, check 405th. Luckily with Lent upon me I have 40 days where I won't be touching social media so I'll have to fill my time somehow. You know what's hard to get a hold of these days? N7 armour templates. What a gong show.

Anyway, it's really cool to see that there is someone from the 405th in my city. I've been waiting for this moment for 11 years!

WOW. I would have loved to have witnessed that

Liamthedevastator said:
Anyway, it's really cool to see that there is someone from the 405th in my city. I've been waiting for this moment for 11 years!
Click to expand...

9, because I've been here for two

Canadian Regiment
Well, all told it's been 11 years. I'm sure there were cosplayers here before I was though so it's an imperfect metric anyway. Next time this kind of thing comes up I'll try to make it, if only to gain some understanding of the Church of Shrek.

Liamthedevastator said:
Well, all told it's been 11 years. I'm sure there were cosplayers here before I was though so it's an imperfect metric anyway. Next time this kind of thing comes up I'll try to make it, if only to gain some understanding of the Church of Shrek.
Click to expand...

I won't be running any Shrek-y goodness at Capital City Comic Con in three weeks but you should totally come out. I'm going to be running a 3D design panel/workshop and hopefully entering the cosplay contest. It'll be rad.

Canadian Regiment
Which day are you doing the workshop? I would love to bring my fiancé but we'll have to choose just one day. Might as well be the one you're doing your workshop on!

Liamthedevastator said:
Which day are you doing the workshop? I would love to bring my fiancé but we'll have to choose just one day. Might as well be the one you're doing your workshop on!
Click to expand...

I was offered a timeslot on the Saturday, they're still finalizing their schedule so I'll let you know when everything is all set in stone.