I haven’t been able to get to a printer to print off the templates for the armor Im making, so Ive been working on other things.


One of the projects the I recently started and definitely want to finish by the end of this month is a Needler. Im going to run you through the steps Ive taken so far and ask some questions as well.


I actually “started” on the Needler probably 2 weeks ago, but in all honesty it was mainly figuring out which weapon I wanted to make, how other people have made it, and finally finding enough reference pictures to start the building process.


Volpin props made a blueprint that helped alot, but since I don’t have a computer or a printer at the moment, I had to make due using my phone and getting the shape and scale close enough. This is nowhere near a replica prop and Im not even sure if Ill want to carry it around when Im done with it.


After I got the main look and size of it drawn on drafting paper decent enough , I cut out the basic shapes and hit another speedbump. How am I going to go about making this? The only material that I really have to work with is eva foam, so I had to make a 3D pattern to go off of.


I sculpted pieces of the needler by chipping away at a block of floral foam. Once I had my pieces, I wrapped them in plastic wrap and ducktape, drew on some seams and registration marks, cut them off the foam, and cut darts where needed until the pieces lied flat. I took the ducktape patterns and transferred them to paper, refined some of the lines, cut the paper patterns out, and Im now in the process of cutting foam in the shape of those paper patterns. Alot of work has gone into this weapon, and Im not even halfway done.


So now that Im on the way to assembly, I still have issues that I want your opinions on how to fix. One of the major ones is the needles, I dont have the tools or experience to cast them out of resin, so I was planning on cutting hot gluesticks into a crystalline shape. I did a test and it looks good, but Im not sure how well they’d hold up to Florida’s heat. Is there any other material that’d work better without being too unattainable?


For the issue of coloring them, I was planning on buying some translucent pink nail polish and do a coat or two so that when I put a light in the base, whether on or off, they’ll actually have color. The thing is, Ive never actually done lighting in a prop or costume. If anyone has an idea of what I could use thats small enough to fit into the body of the weapon, that wouldn’t require any soldering and preferably has an easy access switch, that would be fantastic.


Another thing that Im somewhat worried about is the paintjob. Ive never done anything crazy with paint, so I feel like I could put all of this hard work in and botch it in the final step. I want to get better, and Ive been researching painting techniques, but if anyone had any advice for me, that would also be fantastic.

Thanks ahead of time,

Nicely done. Sometimes you have to go with what you have. Remember every day we learn something new. As far as the shards... have you thought about using some pieces of old plexiglass... maybe glued together to make it thicker. You would not need a sheet, just some smaller, long pieces. Lowes cuts plexi... maybe they would give you some of the scrap? Or an old broken window somewhere you might have noticed. Save money for a Dremel, if you do not already have one. This is a tool everybody should have. Try practicing the paint effects on water or pop bottles. Keep building!

reiseman said:
Nicely done. Sometimes you have to go with what you have. Remember every day we learn something new. As far as the shards... have you thought about using some pieces of old plexiglass... maybe glued together to make it thicker. You would not need a sheet, just some smaller, long pieces. Lowes cuts plexi... maybe they would give you some of the scrap? Or an old broken window somewhere you might have noticed. Save money for a Dremel, if you do not already have one. This is a tool everybody should have. Try practicing the paint effects on water or pop bottles. Keep building!
Click to expand...

Thanks for the solid advice! There is a Lowes not to far from me too. Ill see what they have there. Im not sure how easy plexiglass would be to cut, but we’ll see. I have a dremel, but it’s just a standard 2 speed one. I bought it this year and I love it. As for painting, Im sure you would suggest spray paint. Im not very good, but I have learned how not apply an even coat without leaving paint dripping from what Ive made. I am essentially firm on the basics. The only other option I have right now is craft paints or anything else in a bottle or tube you can buy at a craft store. Because of my limited budget, Ive never bought oil based paint, Liquitex brand or any highly pigmented acrylic, model paints, or airbrush paints. Im living in a dorm style barracks right now too, so I have my own room, but Im sure they wouldn’t appreciate me having an airbrush kit in my room. It limits my tools, workspace, material storage, and all around motivation. Ill definitely be willing to go outside and practice my painting skills every so often. My job has me doing very basic paintjobs every so often as well so Ill see what I can do! Thanks again for the advice reiseman!

Midwest Regiment
Don't want to insult anyone's intelligence, but just to put it out there plexiglass or glass shards would be pretty dang dangerous, so just to keep that in mind if you go that route. That's a tricky one though, I lived in Florida for a time, so I know what you mean about the glue sticks. As for lighting it, you might want to hunt around the toy aisle or dollar general, you might be able to find some sort of lights that could be shoehorned into the body of the gun. Even if the switch is not easy to access, you could create a hatch or removable panel to get at it.

Back to the shards, I did a quick search on amazon for rubber tubing or rods. https://www.amazon.com/Watts-SVGE10...=1536542119&sr=8-2&keywords=clear+rubber+tube You might be able to get the "shard" look just by gouging the tube with a x-acto knife or razor blade, and then cap the end of it somehow to make a point, or maybe melt the end into a point. The rubber would be safer, and light would show through it well, I'm guessing. If it's a powerful enough light, anyway.

So just some brainstorming!

jfcapozella said:
The only other option I have right now is craft paints or anything else in a bottle or tube you can buy at a craft store.
Click to expand...

Check in your local craft store for Vallejo model paints. In their Game Colour brush on acrylics they have a group of transparent paints and a group of glazes. Each bottle locally is $4 so in the states they probably two or three. For a sample of the colours you can check out my LoZ:BotW arrows.

I've got alot of progress done on the Needler I'm making, not in the amount of time that I wanted, but it is almost done. I recently made the grip for it and the only thing left for me to make I this little piece that sticks out below the needle compartment. Everything else is just details, prep, and paint! 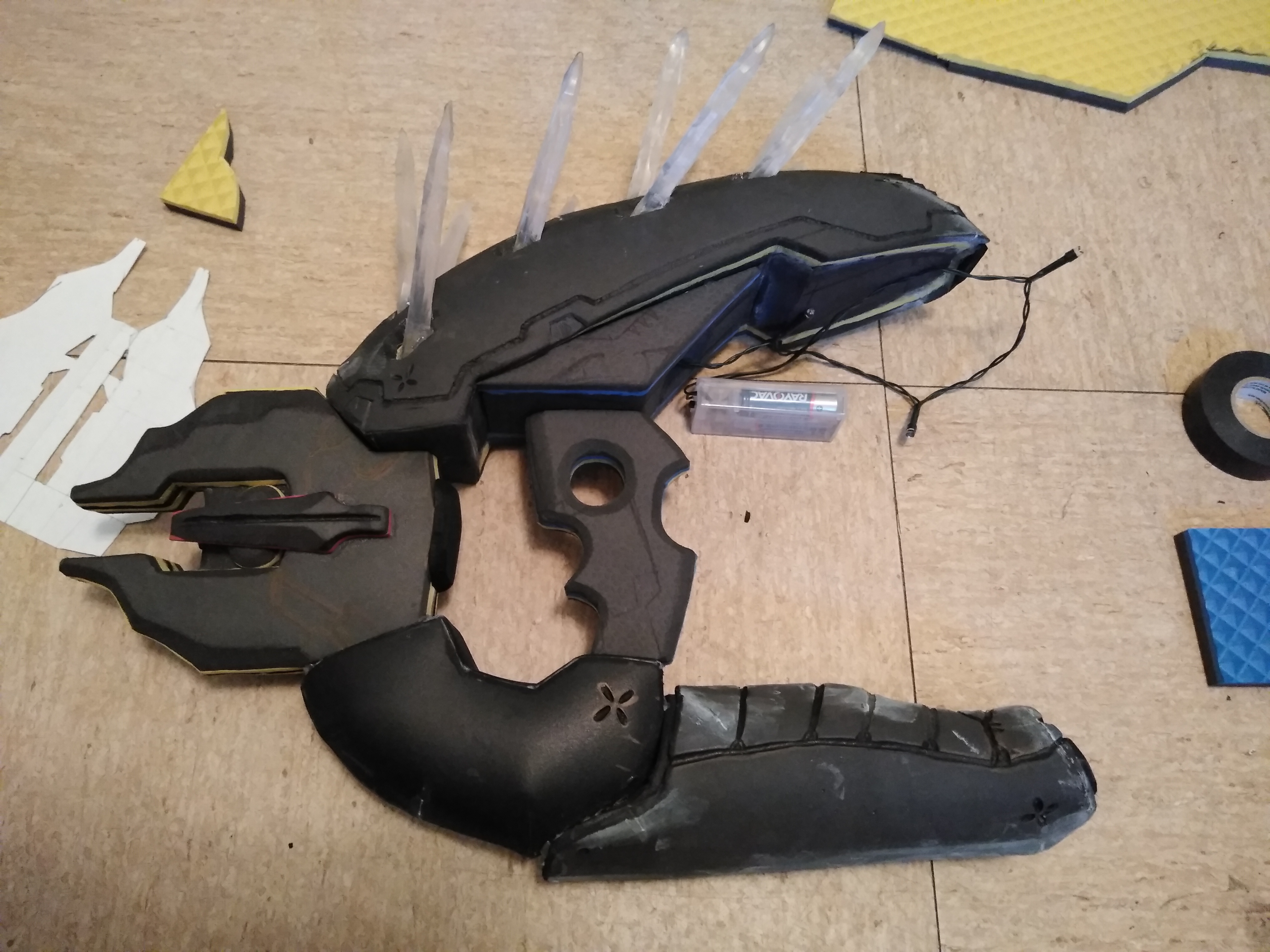 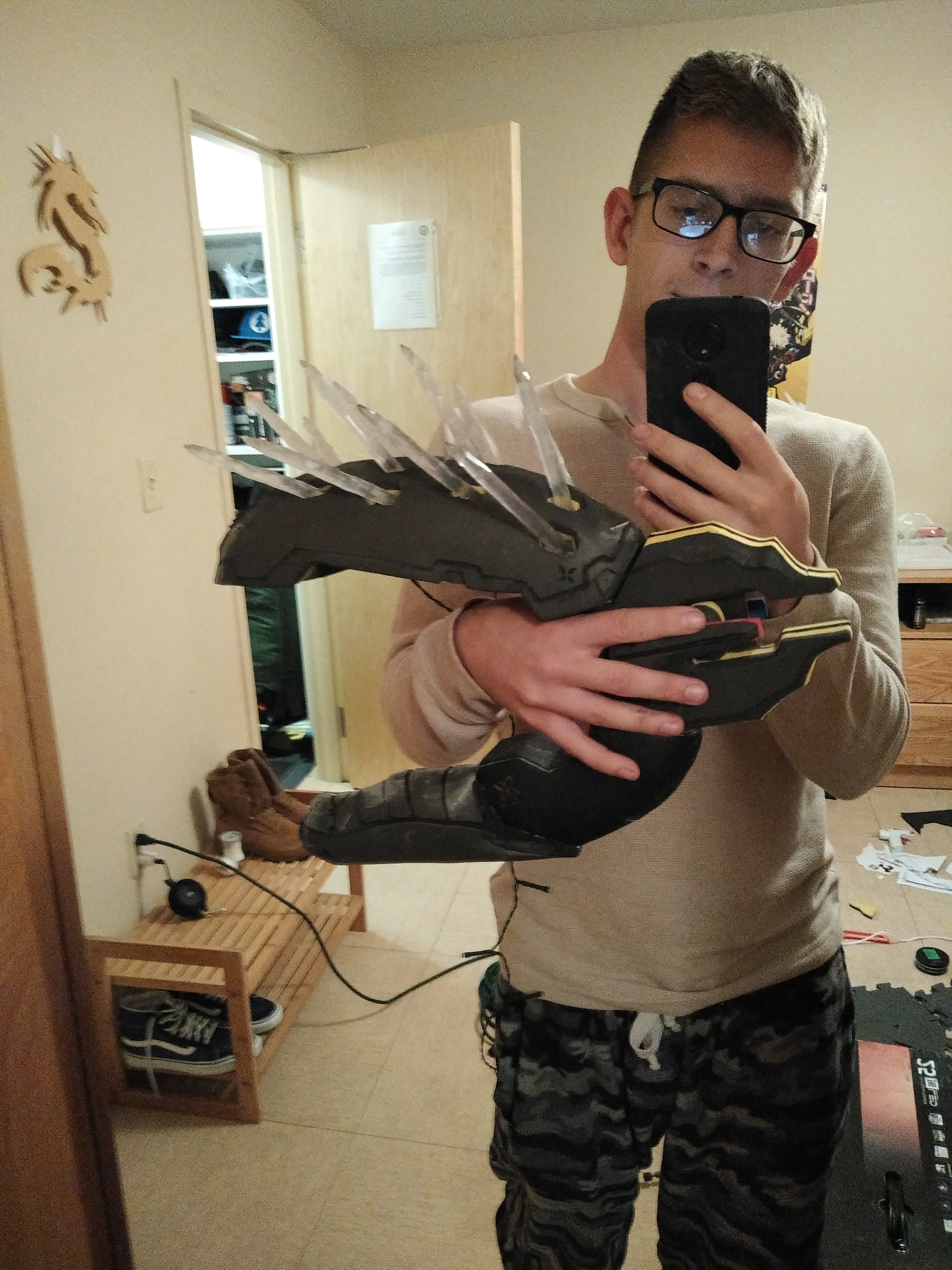 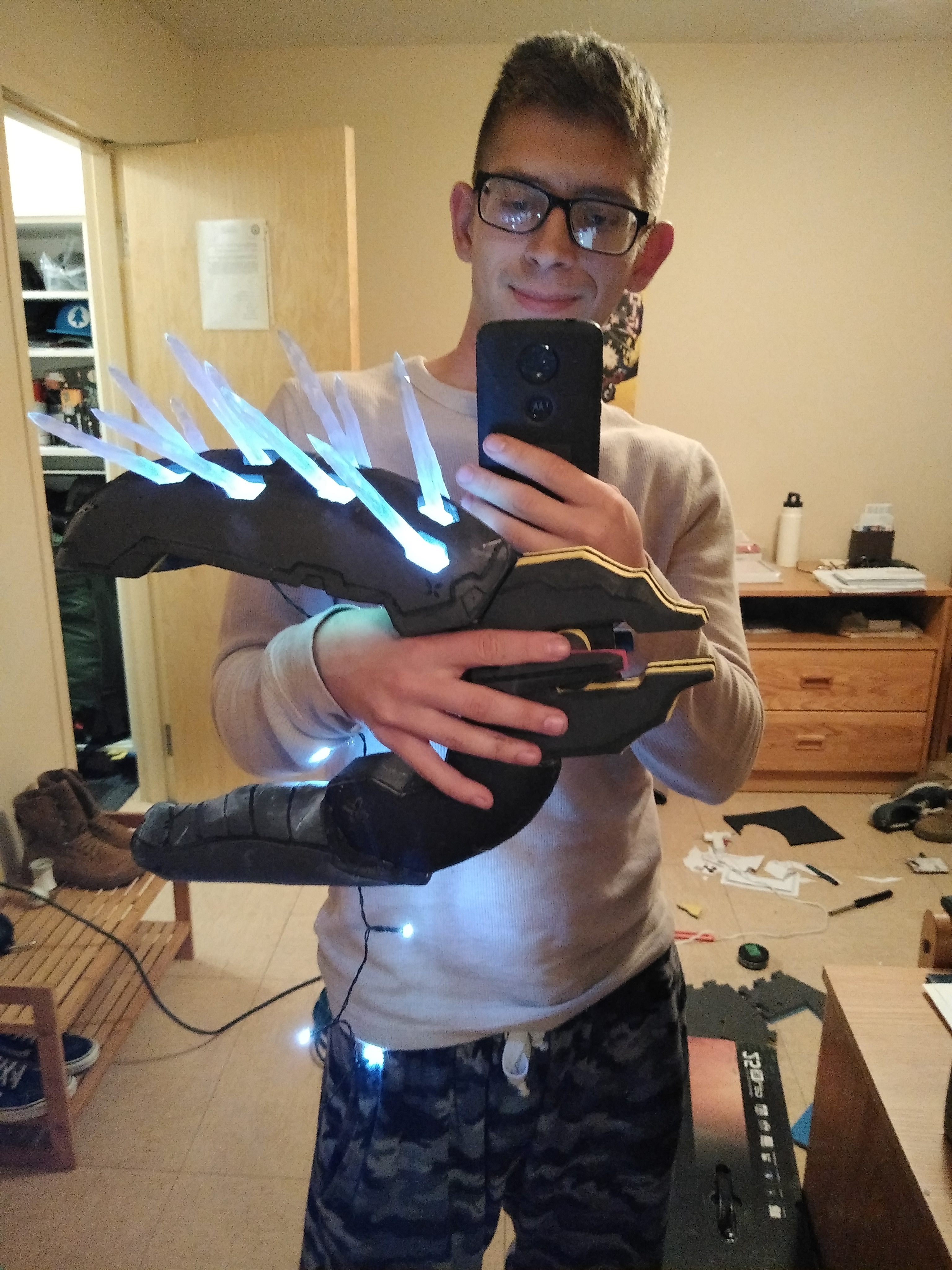 mumgoot said:
Dude that is seriously impressive.
Click to expand...

Thanks bro! Ive worked hard on it so I really do appreciate it

Mountain Regiment
405th Regiment Officer
Very kudos well done. I am loving the lights! Especially love that they're white, not pink. Never thought about it, but the white looks so much better!

Sean Anwalt said:
Very kudos well done. I am loving the lights! Especially love that they're white, not pink. Never thought about it, but the white looks so much better!
Click to expand...

Thanks! I like the white too, but I haven't painted anything yet. They'll end up being pink, I'm planning on using pinkish purple nail polish to color the needles

Finished and painted! Honestly this has turned out so much better than I could've hoped for and I'm so proud of it. I accomplished everything I wanted to achieve in this build. All of the ideas I had ended up working out in the end too! Like using hot glue sticks as needles, Christmas lights to light them up, nail polish to color and tint, and even using a drawer insert as a way to get a neat pattern on the purple parts. I did tests to see how the paint would react to each other and had to do alot of masking to make sure some paints didn't interact with others because of bad reactions between the metallics and regular paint. Spraying the whole thing down with a silver layer first worked out too, so I have a picture of a solid silver Needler at the bottom if you want to see. Another thing I should mention is that the needles arent as blue looking in real life when the lights are off.

Some things I would probably change if I were to make it again would be to probably start out with a full size printout for a template instead of freehanding it, make the top shell out of thinner material than half inch, have the switch to turn on the lights somewhere more convenient, actually dye and cast needles, and use brighter LEDs. I liked the effect that the drawer mat made when painting it, but if I had more time I'd actually buy something with better shaped mesh. Another technique I tried out was to spread mod podge on the surface and sprinkle sand onto it to give the lower black part texture like in references, I loved how that turned out and will definitely try to find an excuse to use it again in future projects. All in all, I tested my limits with this build and I now realize that Ive been holding myself back on what I could be doing because I thought I wasn't good enough. My next build might not be Halo based, but I'll definitely try to put as much effort and thought into it as I did with this Needler!

Props So I got a 3D printer last week