Just the beginning of course!
R

starting a "tutorial" of sorts now... we'll see what it looks like later on.

Yeah looks great,ganna cover everything H1 one and up?

I started getting errors though as I went through the list of pics. It was telling me I wasn't authorized about halfway through, and then I went to the last pic, and it started working again... I think I was around 37 or something.

Four things I can suggest that might possibly improve it:

#1 - State where the pics came from. At least one was a high def render that was done before the game was finished. Sometimes those pre-game renders aren't accurate. They're nice to look at to confirm stuff you find in the in-game model, but I wouldn't build from them. Just state like "In-Game shot", "Art shot", "Pre-game shot", "fanmade suit, "figure", figure-render" etc.

#2 - There's a lot of pics there that are the same. If you're doing a series of in-game shots, try getting the 8 key shots with the target raised to your normal viewing level. (Like, in this case, standing on the warthog or other raised platform)
(8 key shots= from.. North, NorthEast, East, SouthEast, South, etc). After that, something close to "top downs" (from the top looking down) and then, where useful, "Bottom ups".

It minimizes the in-game perspective warp to be aligned with your target like that, and with that many key shots, you can almost do an animated GIF showing the item rotation if you wanted to, it helps get a feel for what it looks like as you move around it.

#3 - I'd always suggest getting a full body shot at the beginning of any item shot series, so the viewer can click on it to re-evaluate the overall item size compared to the rest of the body while they're still looking at the pics.

#4 - Can you add a link to a forum post that only exists to discuss the images? For example, someone might have an idea what those round doohickeys look like, or perhaps recognize boots that look like that.

Just some thoughts.. anyone?
F

I hope that HALO 1 Marines will not be looked down apon. LOL My personal preferences aside I think this site, I posted this a while ago, here will help with establishing proportions and the such. I look forward to everyones progress.

Found this over at Deviant Art, courtesy Pinkuh. Hope it helps. I love that armor! 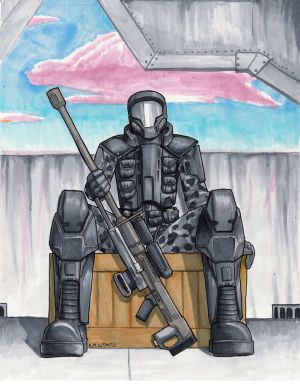 I had that picture. It lacks a lot of detail that is present on the shin guards. I'm going to do a "pattern" thing like you are, so far it's coming along great. I'll post pictures later.

I'll update more as I do more.

looks awesome, adam. I can't wait until its finished. I have yet to see finished ODST armor.
F

WOW! So I guess the next question is what style boots would be considered appropriate for the OSDT ?

I forgot I had this pic, but this may help a little bit: http://i22.photobucket.com/albums/b303/Osi...lo/HaloODST.jpg
I got it from my friend a few weeks ago on aim, i'll ask him about where he got it if he signs on later.

Osiris said:
I forgot I had this pic, but this may help a little bit: http://i22.photobucket.com/albums/b303/Osi...lo/HaloODST.jpg
I got it from my friend a few weeks ago on aim, i'll ask him about where he got it if he signs on later.
Click to expand...

It's a Halo 2 Wallpaper from Bungie.net. Availible in larger sizes at the same place.

Hands down, the best boot I've seen for this would be the "wicked road warrior" boot. I forgot who puts it out, but an Ebay search I did a few months ago discovered that they were being clearanced for about 16 bucks.

I was using them on a movie costume, and I remembered how much they looked like ODST boots. I only have one set left.. they're not for sale, but I can get pics of them though. These were a little different than the current version I keep seeing... but maybe someone with some time on their hands could do a google search for them and get pics/supplier info?
Try entering in "Wicked road warrior" (complete with the quotes)
Last edited by a moderator: Feb 25, 2017
F

They have 2 vids on this site in the download section. I haven't talk to them yet, but they might have other resources to help.

1. The shin guards in the renders are much different than the shin guards in the game. The renders guards are a LOT wider, especially at the top. In the game, they are a lot thinner, and look more like how mine is started. While I'm going to make the ones I'm working on, wider, they can't be as wide as the render, because you wont' be able to walk without looking with a bowlegged cowboy.

Also, here is a texture I'm working on for the shin armor. primer colored right now:

It's zoomed way way in, you can get an idea of the size of the relief from the matboard profile:

Adam - When you finish the leg armor, and other pieces as well, what procedure will you use to make copies? Vacumform, casting, other?
R

looks good from what I can see, not exactly sure how much i'm seeing, but it looks good. i like the shine when its in darker light. can't wait to see the progress/process.

i'll cast new copies when I get done. hopefully make enough for everyone ;-).... we'll see though. Stuff is expensive.