Pacific Regiment
Im Working on a power ranger suit! I know power rangers is for kids, but i still love it! I'm just a giant child lol... anyway I'm going to be making the origional red ranger... i already have the spandex (ordered from amazon cuz i can't sew) it came with the gloves and belt... it also came with a cheep helmet (the thin plastic kind that breaks when you touch it lol) and crappy boot covers... i threw away the boot covers and ordered plain white ones but i need to add the diamonds onto them and idk how... theyre suposed to look like this 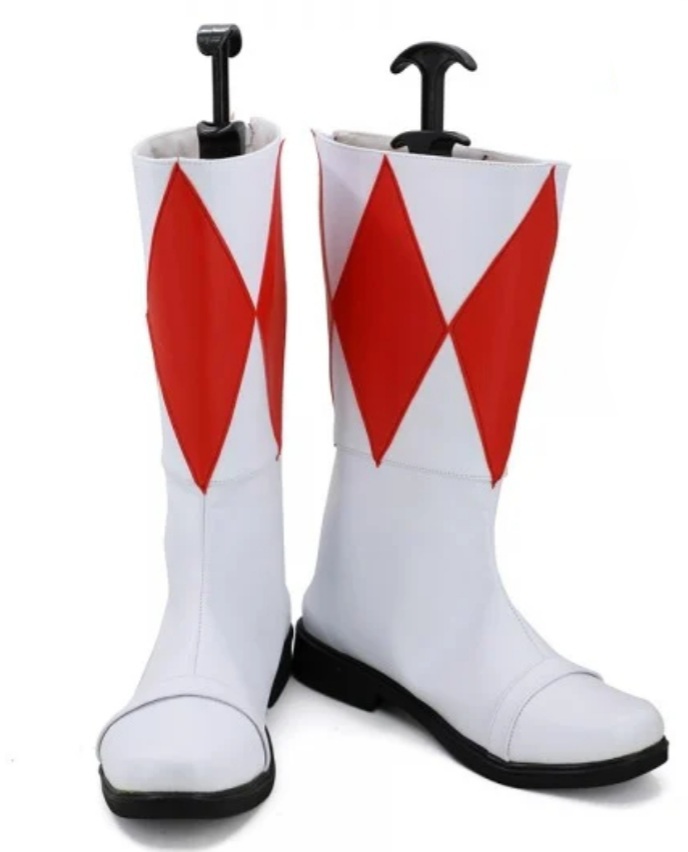 But I dont know how to make/paint the diamonds on or whatever so they're currently just blank white... anybody know how I could add diamond decals on to boots?

Here's a pic of my suit so far

Im also going to make a better helmet than the one it came with and possibly better gloves too... and i need a white neck seal thing
Last edited: Jul 14, 2020

Midwest Regiment
i think i have the neck seal pattern some where i will look around when i get home. as far as the boots you could use e6000 goo to glue them to the boots.

Colonial Regiment
All My power ranger helmets are from the lightning and legacy collections. All were around $80-100 a piece and well worth it for the quality. I purchased my red ranger suit off eBay because I don’t mess with sewing and fabric but it wasn’t all that expensive. Still an incredibly fun cosplay.

Division Staff
Canadian Regiment
405th Regiment Officer
Delta
Community Staff
I summon 3DVagabond from the depths for their expertise on the making of Power Rangers equipment! (also to check out a cool new build)

DefineLuck said:
All My power ranger helmets are from the lightning and legacy collections. All were around $80-100 a piece and well worth it for the quality. I purchased my red ranger suit off eBay because I don’t mess with sewing and fabric but it wasn’t all that expensive. Still an incredibly fun cosplay.
Click to expand...

I was actually thinking about buying one of those helmets, but I have a big head and im a little worried it won't fit me... would you happen to know how big it is? Is there any way to adjust the size?

ButterBacon3000 said:
I was actually thinking about buying one of those helmets, but I have a big head and im a little worried it won't fit me... would you happen to know how big it is? Is there any way to adjust the size?
Click to expand...

Yes there is a way to adjust the strap Inside. I’m 6’0 and 200 pounds and it fits me perfect

Colonial Regiment
I knew I had a picture of me wearing it somewhere. Again, 6ft, 200 pounds and I would say an average sized head for someone my size. Fits great and plenty of room without looking like a bobble head

Alright, Alright! Who summoned me?! *Looks around* <_< >_> ^_^ Ooooooooooh! Okay, I guess now would be the right time to check out what's going on here. Okay, so you a bought a MMPR Red ranger suit. When it comes to obtaining one, you have to be very careful on buying a suit especially on a budget during these times. So I'm not entirely sure which part of the globe you're from, but if you can send me the link, I can check it out later on this week.

Now, a few things that is a must to upgrade this further with out breaking the bank. As marinesniper stated, you are going to need a suitable underhood so people won't see the neck. You have two options. One is going to take some skill and the other will have to do with the helmet later on this post. Now, you could obtain a pattern simular to what the NASCAR drivers wear and make it yourself or have someone you know to make one for you. Here's an example of what I was refering to: 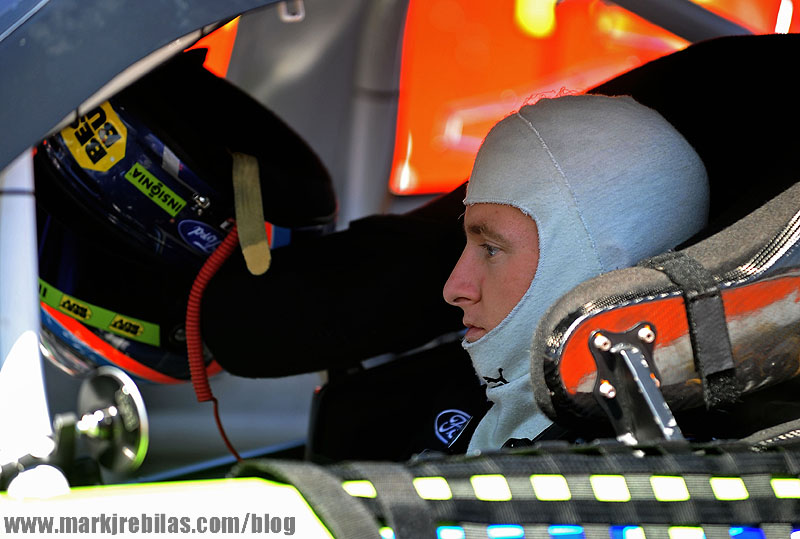 Just make sure it fits around your head and neck and make it extend into the suit.

As far as the boots are concerned, you still have a few options to make it work. Making the diamonds around the boots is not quite as easy as you would think. You could paint them, but using paint directly on the boots would make it suspectable to peeling since the material would have to flex as you walk with the boots. The best method is to actually sew them on. From what I have learned, it uses pleather or PU material to stich the material on. However, you have to be very careful when performing with method. Once you create a hole in the material, that's it! You are stuck with it for the rest of the life time of the boots. Glueing them on to the boot is a great method if you lack the skill. Once again, marinesniper provided some good ideas here.

But I will advise that you make sure you cut them at the right size before you do so. If I remember correctly, that 1 of the diamonds in the back of the boot where the zipper travels up the calf is split in two. I suggest that you trace out some test patterns on paper before you cut the PU Material out so that way you can gauge how wide to need to make them.

Finally, the helmet. Now, there are many paths into making a helmet for the suit and each method can factor in things like time and effort.
DefineLuck has a good idea in buying a Legacy Collection Red Ranger helmet, however, due to the fact that Bandai no longer make the helmets any more since Saban split with them a few years ago, the cost has gone up. At the time of this message posting the lowest price is 170 dollars with out shipping. 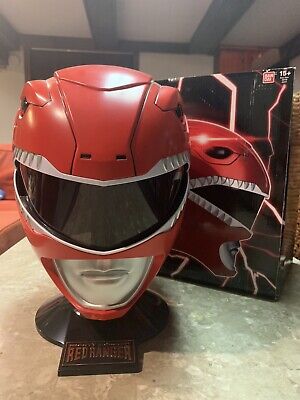 <p>Bandai Mighty Morphin Power Rangers Legacy Red Ranger Full Size Helmet 1:1 Scale. Condition is Used. Shipped with USPS Priority Mail. Helmet is in perfect condition and displayed only in a Detolf. Includes original box which has quite a few creases (it was shipped to me that way, see...
www.ebay.com

If you want to get one, now's the time to act!

Note to future viewers: This listing is most likely dead. Don't click on this after July 22, 2020.

Someone did a product review on it on Youtube so you can figure out if this helmet is the right one for you.


Now keep in mind that when wearing this helmet, it's more of wearing a hard hat, but you can breath out of it just fine.

If you want one professionally done, be prepared to pay anything north of 400 bucks for it. But that's only if you want to wait for it to be shipped to you on a mass order. Aniki Cosplay is a great maker to order one, but they will send it to you as part of a mass order for other customers unless you pay for express shipping and then you will have to pay nearly half a grand for it.

Hopefully, I can try to at least match the quality once I get back into making the costume near the end of the month. I invested a lot of things from Amazon as part of research and development in hopes to throw my hat into the ring of makers. So I will be starting up that thread again really soon.

Anyway, those are your options and choose wisely. Good luck.

Pacific Regiment
I got the lightning collection red ranger helmet! It looks great! 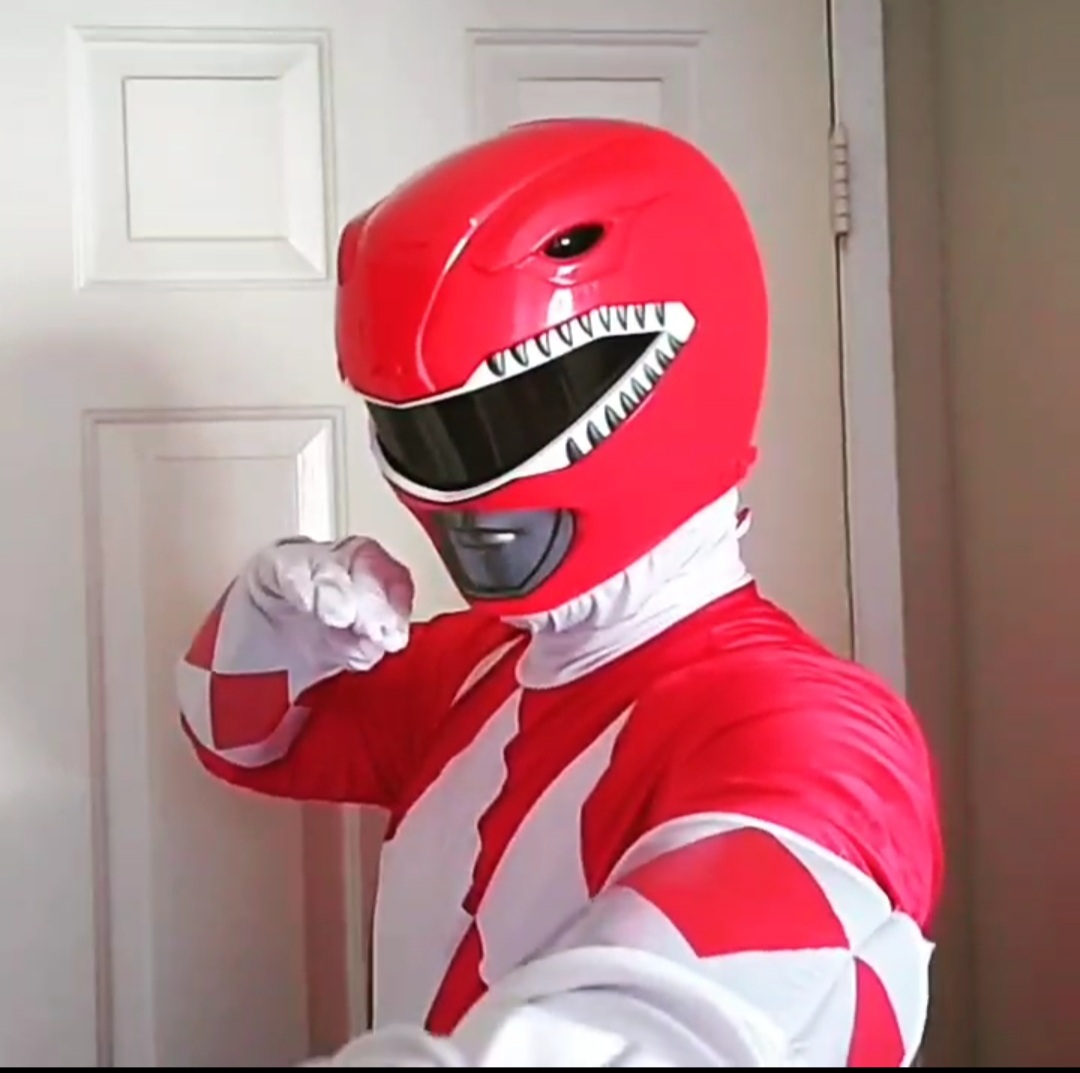 ButterBacon3000 said:
I got the lightning collection red ranger helmet! It looks great! View attachment 298798
I also have a white balaclava so my neck doesn't show through and matches the rest of the suit
Click to expand...