So a friend asked me if I'd be willing to make a couple of DC17 blasters for a friend of his. Sure, no problem. There's nice near-screen-accurate DC17 stuff to be found on Thingiverse, so why not I thought, quick print for a nice guy like that, no effort at all.

Turns out, he did prefer the "not so boring, not so screen accurate" versions made by several fans in foam/wood/styreen better than the original ones, so the question became "can you mimic that in 3D too". So I took a look at the fan-build ones, and combined several of the elements seen there into a new, "less boring" version. It also explains the "remixed" nature of it : there's about 4 different design elements mixed into this one, so I credit every single one of the previous handcrafted models and builders for this one. I just "recreated them and put them together into one new model".

The results came out pretty nice, so here they are, available for everyone -of course-.
He also asked "if a small version as keepsake could be made". So sure, why not : 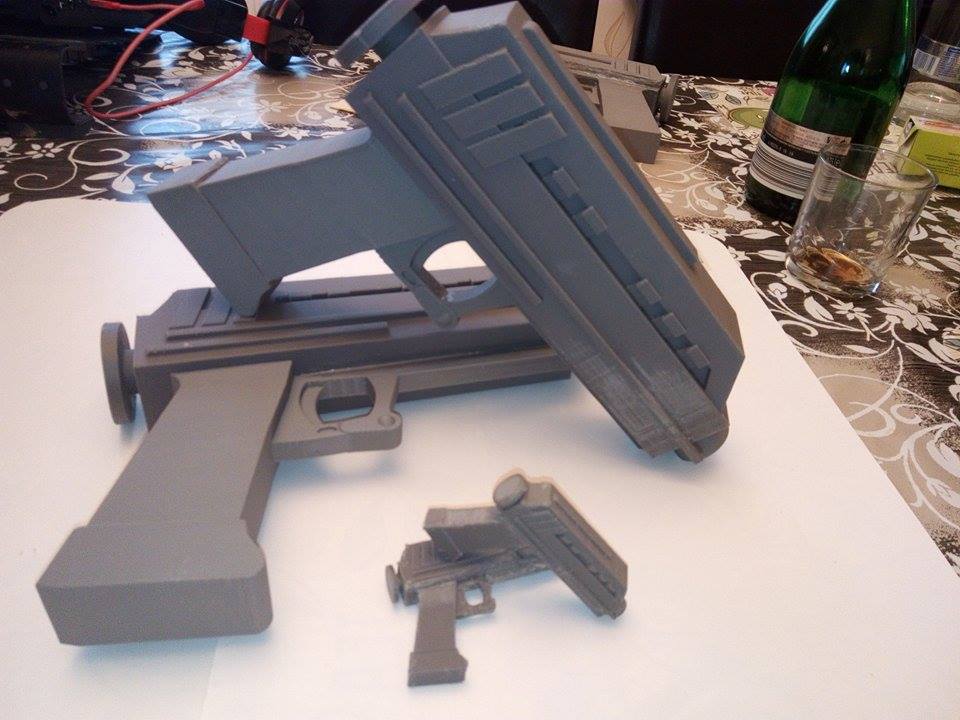 If anyone wants to use these to do a Cmdr Rex or whatever, I've included the files here.

The print is done in ABS+, 0,15 layer height, 3 wall shell, 20% infill. Length is the typical 245mm length. The "rear disc" is a sepperate part and should be already be correctly pre-scaled to allow a nice and tight fit, making painting and cleaning up the model somewhat easier. The gun itself consists of only 2 parts, the gun body and the lower grip part. Both are connected using ABS welding and pretty much behave as a single-part print after hardening.

European Regiment
Lol, No problem, not really into Star Wars myself I'm afraid. Yes, such people do exist.
"Captain" Rex.. Any better ? The commander was Cody I suppose ?
Please don't shoot me. Having seen only the German synchronized versions of Clone Wars doesn't really help.

Pacific Regiment
405th Regiment Officer
Washington
Community Staff
You are the best, kaween !
I'm sorry it was so much trouble. I hope you were able to have some fun with it at least. I'll take responsibility for the Cmdr Rex thing too.. my bad... I got him mixed up with Cmdr Gree which my friend is also doing a cosplay of. I did not watch much of the animated series.. I liked it, but just not the same as IV-VI (and related novels) for me.

Canadian Regiment
It's no trouble guys, guess everyone hasn't memorized all the characters from Star Wars.
Now that that's out of the way, as a super big Star Trek fan as well...
"I'm more of a Star Trek guy and it's so good to see Captain Kirk again. Or Archer. Or, or, or Sisko ? Jayneway .... ?"

European Regiment
HAHAHAHA.
That's EXACTLY the response I was hoping for.

Of course, it's Commander Sinclair without a wig.
Could be Quincy Taggert too though, hard to tell, they look so alike.

On a more serious note (haha, note), the post above me reminds me of the Quadrophenia album of The Who. Or was it Elvis ? It all becomes kinda fuzzy at my age.
Last edited: Jan 11, 2017

NOOOOOOO WHY MUST YOU HURT ME LIKE THIS????
K

Pacific Regiment
Washington
how COULD YOU defile the name Captain Rex?!?!
Why, YOU...YOU.....

TheBraus's urbanmech from the mechwarrior series
2 3