Good Display for when not wearing armor

See if we can find a cheaper one of these. I know the price varies quite a bit from place to place.

paint it black and you're good to go

put the black undersuit on it.
S

it's a flexible mannequin, you can pose it however you want. that's what makes it so great. price, yeah, steep.
A

this would be a perfect setup for those suits that were casted from the statues, you could pose it just the same and when you showed it to someone they'de go

"Hey cool statue of the MC"

And then you pull the helmet off :mrgreen:

That would be cool... I dont think I will would use it though...
H

Ive been looking for a mannequin for some time now; and I know that when a near-by Target cleans out the back of their store, they leave their extra mannequins outside . lol
C

good for you man, this is cool although i think it takes someone pretty hardcore like you guys to do that.

My ill just toss it all in a plastic bin.
D

I have a tut made for making a mannequin from PVC tubing.

OK, so you want to build a mannequin to show off that killer costume of yours. Tired of stuffing it in boxes?
Well here's something you can do about it.

For this tutorial I am using spare plumbing I had lying around the back of my garage, and my Darth Vader costume. 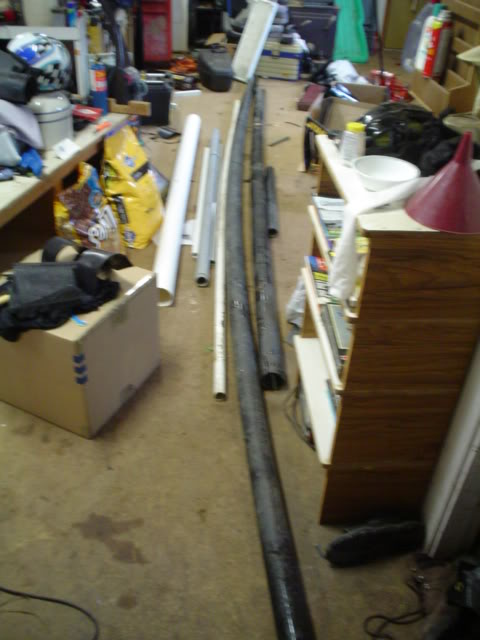 To start: Here is a concept picture I drew up.

The first thing to do is get a measuring tape and measure yourself from the pivot of your hips (waist) to the top of your head. I came out with 41 inches. Be sure to add a couple of inches to the actual length (I'll show you why later).

I then took a piece of 6 inch I.D. PVC tubing, marked it and cut it off to that length using an ordinary hacksaw.

LIL Trick: make many marks all the way around the pipe using a permenant marker. This will help you in cutting it as straight as possible.

Now, measure yourself from the end of your shoulder (on top) to the pivot point of your leg (hips). now we're going to mark where our mannequin's hips will be. Move up 2 inches from the bottom of the pipe you just cut, then measure half the diameter of the pipe you will be using for the hips. Make your mark. Now take the measurement you took from your hip to your shoulder, and mark that, measuring up from the mark you just made for your mannequins waist to where your shoulders will be.


Ok, now using a hole saw cut out holes in your pipe straight across the center of the pipe. Make sure to use a hole saw bit that is the same size as the outside diameter of the pipe your using.

Once you have completed cutting out both holes it should look like this.

Now, on to the waist. Measure yourself straight across the front. At the widest point left to right. This will be the width of the waist on your mannequin.

Now cut off a piece of tubing using that measurement. I came up with 17 inches. I used electrical conduit plumbing for mine it is twice as thick as the rest of the PVC tubing I had.

NOTE: make sure the pipe you use for the waist and shoulders is at least twice as thick as the back bone or spine. These two pieces will carry the majority of the twisting load.


Now on to the shoulders.

Measure yourself from shoulder tip to shoulder tip. this will be width of your mannequins shoulders. Again cut off a piece of pipe (same as was used for the waist). I came up with 18 inches.

Now you should have a big pipe with 4 holes in it, and two cut off pieces of smaller pipe right?

Now insert the shorter cut off pipe you measured for your waist, and slide it through the bottom two holes. Repeat the same for the other pipe for the shoulders in the top two holes.

Now on to the legs:

I used 4 inch PVC for the legs. It is very thick walled and very strong, which it needs to be, as my mannequin will be doing his own standing.

Now measure yourself from the pivot of your leg at your hip, to the floor.

Now, moving down from the end of the pipe 2 inches, add half of the width of the pipe you used for the waist on top of the 2 inches. Mark that point and cut the hole out. Repeat this on the other pipe. When you're done the two pipes should match each other.

Now add the legs to your mannequin. Be carefull at this point, nothing is locked by bolts into a pose and your mannequin will be a bit floppy.

But this is pretty close to what you should have.

Now, back to referring to this first picture, there are 4 places on this picture showing red dots. These are bolts. These points you will drill all the way through the areas with the red dots. You will want to have washers under the heads of the bolts, and the nuts. I reccomend getting bolts that are just longer than the width of the pipe they are going through and using acorn nuts.

Make sure all your pieces are even, placed left to right. then drill the holes with the entire thing laying flat on the ground. Now install the Bolts in the holes you drilled, like this.

At this point you should have about an hour into the mannequin build.

Now on to the arms.

I used two 45 degree connectors for the shoulders and the elbows, as I (for now) am going to have my dark lord posing in the "come with me, it is the only way" pose.

Here are the connectors I used.

Now take 2 of your elbows and place them in the pipe we made for the shoulders.

Now, holding them level with the ground, drill through them and the pipe and insert a bolt. Repeat this on the other side.

Now, using the measuring tape, measure you forearm from the middle knuckle on your hand, to the joint of your elbow. Then measure from the elbow to the top of your shoulder. I came out with 15 inches for my forearm, and 12 inches for my upper arm.

Now cut those lengths off of the pipe you're going to use for your arms. You'll need a pair per arm.

Now take the other connectors you used, wether a 90 degree, or a 45, and using plumber's cement, glue the connectors to the forearm pipes.

Then glue the upper arm pipes you cut to the connectors you mounted to the shoulders. Now glue the forearms to the upper arms, again using plumber's cement.

At this point your mannequin's arms should look like this.

Now you have completed your basic mannequin. And you should have something like this laying on the ground.

Now stand it up!!

Now for some more features to make this hard and rigid mannequin more posable.

You can just take out the bolt that holds the arm to the shoulder, lift the arm and redrill. Then put the bolt back in. Heres the stance I wanted!

Heres with the costume on with no head.

And now with the mask on to complete the costume, add some stuffing and you're set.

Now what I did was I placed bolts in the shoulder that were just long enough to be flush at the back, making them more pins than bolts. When you put the costume on the mannequin you will need to unpin the arms at the shoulders to get the body suit and surcoat on. By pulling the shoulder pin out, and repositioning the arm and redrilling you can get many poses.
Also by making a couple of arms for the mannequin you can vary the arms from left to right, and change the pose entirely.

You can also add small pipes sticking out the front of the bottom of the legs to make feet. just make them sized to still fit in the boots.

Here he is all stuffed and in his glory!

Using a mannequin is also another great way to be able to look at your costume from the perspective of you wearing it.

I hope this helps. My total cost for this was 4 dollars and 85 cents.
F

We'll make sure that this gets posted into out Tutorial Links section.

Thanks Darth, and welcome to the site!

Awesome and so much cheaper!


This is perfect for my hall of mjolnir plan. :shifty ninja:
D

Colonial Regiment
But that would be illegal and it's not a good idea to do jail time to display your armor.

And not something you should recommend on this website.

Ive seen tut's out there that show you how to make a mannequin out of spray foam, and RTV. Its a long build, but its better than jail time LOL

Also, if you check on ebay, mannequin are not cheap! Even broken ones cost several hundred dollars.

Free to a good home