Halo Reach CQB build- based on Daisy-023- working on improvements

Hi there! My name is Olympia from Albuquerque, New Mexico and I'm new to the foam armor building scene. I finally finished working on my Halo: Reach armor last year using Pepakura files and EVA foam just in time for the Santa Fe Comic Con 2015. I have a few pictures of it below. I love how it came out but like all cosplays, things can always be improved to make it better. I want to fix up the shoulders, forearms, add some spine pieces, possibly lights and armor on the gloves. Any other advice to help me make it better would be greatly appreciated. I hope to have an improved spartan just in time for Santa Fe Comic Con 2016 in October. I'll be posting progress pictures as I go.

Thank you! I loved Halo Reach and thought it would be cool to bring my spartan to life.
Here's some progress on the forearms. I made them bigger this time around and will add some more surface details.

Midwest Regiment
It looks great, can't wait to see when you have it done. I have always loved the CQB

Hopefully after these improvements I will be content with how it looks. But a cosplay never seems to be finished.

Great to see someone building Daisy's armor from halo legends :3 can't wait to see your new and improved build

I would suggest you a neckseal!

Turborider said:
I would suggest you a neckseal!
Click to expand...

Thanks for the suggestion. I've been looking into what to use. So far a ski mask seems like the best bet but it'll be hot.

I'm adding more details to the AR that I started a long time ago. I was inspired by Andrew Da Frontline Trooper from Youtube. Luckily, he had some files that you could use on FB to scale and use for carving guns out of Styrofoam. I'm not too good with using a box cutter the way he does but the pistol came out okay. I like this method, even though it can be messy. If anyone wants to go this route make sure you buy a lot of replacement blades.

Here's some pics of making the pistol that I have today.

The foam weapons always amaze me, but I am afraid of the durability aspect. I would hate to break/rip one after all the work put in. Do you find they stand up to wear well?

Phule said:
The foam weapons always amaze me, but I am afraid of the durability aspect. I would hate to break/rip one after all the work put in. Do you find they stand up to wear well?
Click to expand...

I was worried about that aspect as well but haven't run into any issues so far. My M6C/SOCOM has been strapped to my hip for ~50 hours of con trooping time and has been tossed around for photos and shows no real sign of wear and tear. It's just a matter of knowing the building limits of the material, adding a bit of support where you're pushing that limit and then giving a good finish to the prop to protect from any external damage.

Phule said:
The foam weapons always amaze me, but I am afraid of the durability aspect. I would hate to break/rip one after all the work put in. Do you find they stand up to wear well?
Click to expand...

From what I've seen so far with my pistol, there is going to be some wear/tear and things are bound to break. I only sanded it, added some crafting foam for some details and painted it with acrylic paint. I was unsure of how spray paint would work on it so I skipped that. The thin sections have the potential to break like with my trigger/hand guard. It did break off during a move but I was able to piece it back together. Some paint does get scuffed but nothing major. But I could see it accidentally getting bumped at a con and breaking. If you are worried about durability I would definitely look into EVA foam options.

The AR is probably going to be my last Styrofoam(blue insulation foam) build because I'm paranoid of it breaking.

Oh wow it's been quite a while since my last update. I was able to make my forearms better ad bigger than my initial build, which was not too bad. I'm a lot happier with the size and fit. Also the shoulder armor was retired and replaced with a better version based off of Kat's. All of these improvements actually have to be stuffed with some soft foam that you would use for furniture for a snug fit. 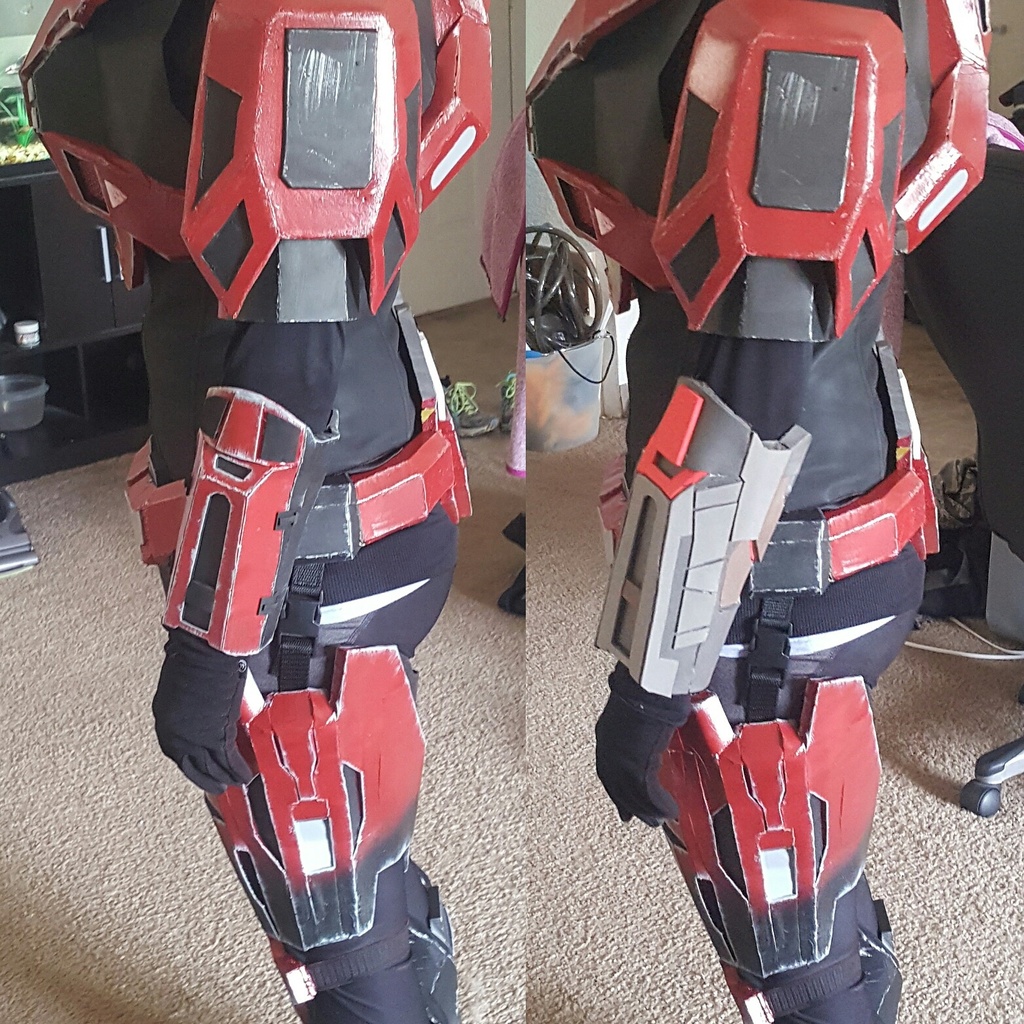 Shoulders: New vs. Old- Looking back the first shoulders were pretty huge... 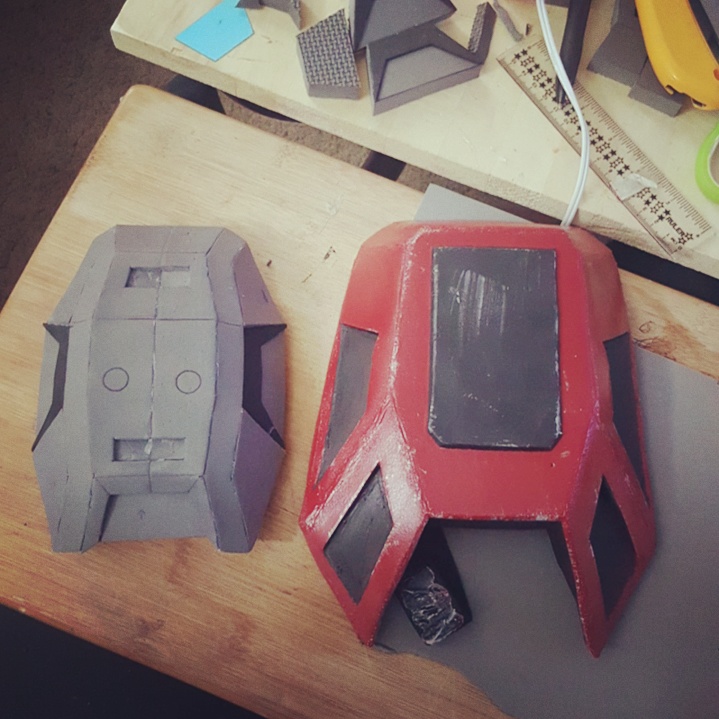 Here's a side by side comparison of my armor back from 2015 vs. last year 2016. I think everything looks a lot better, weathering makes a bit difference! 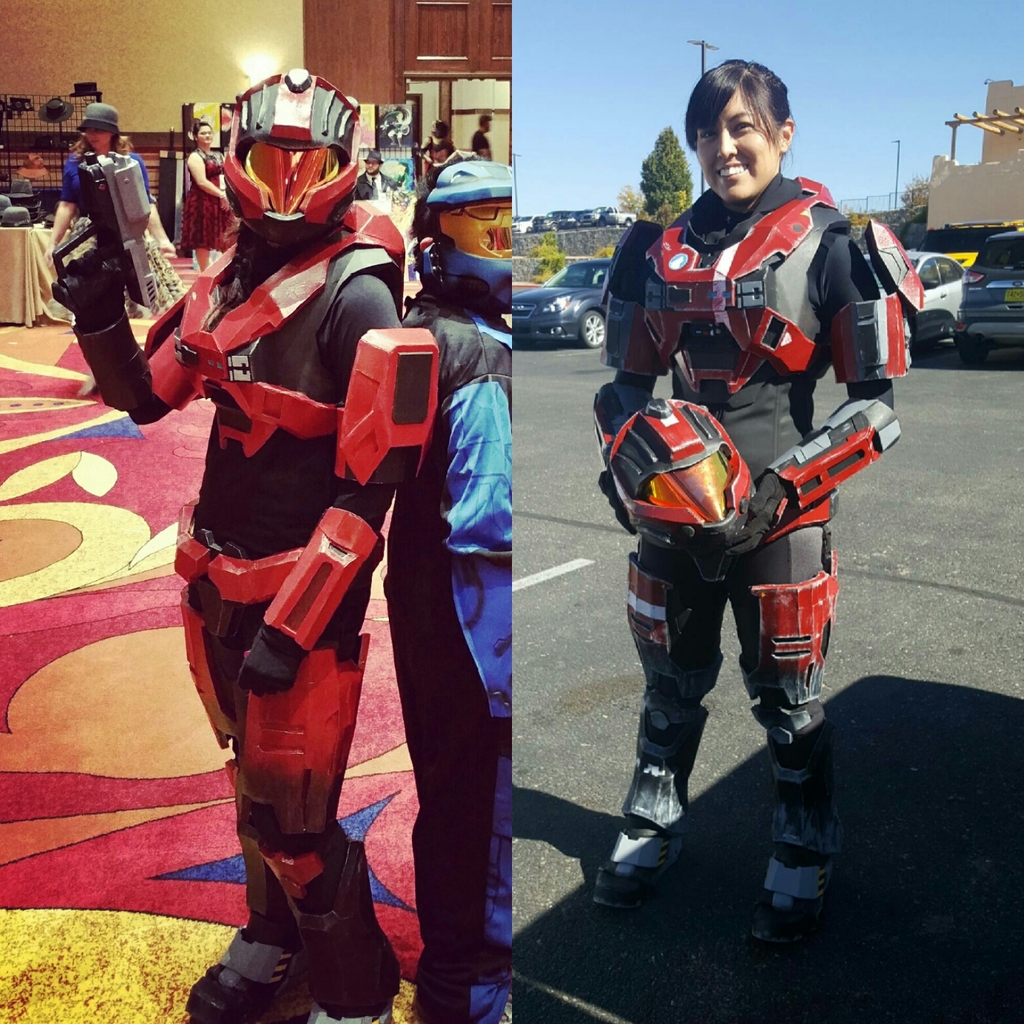 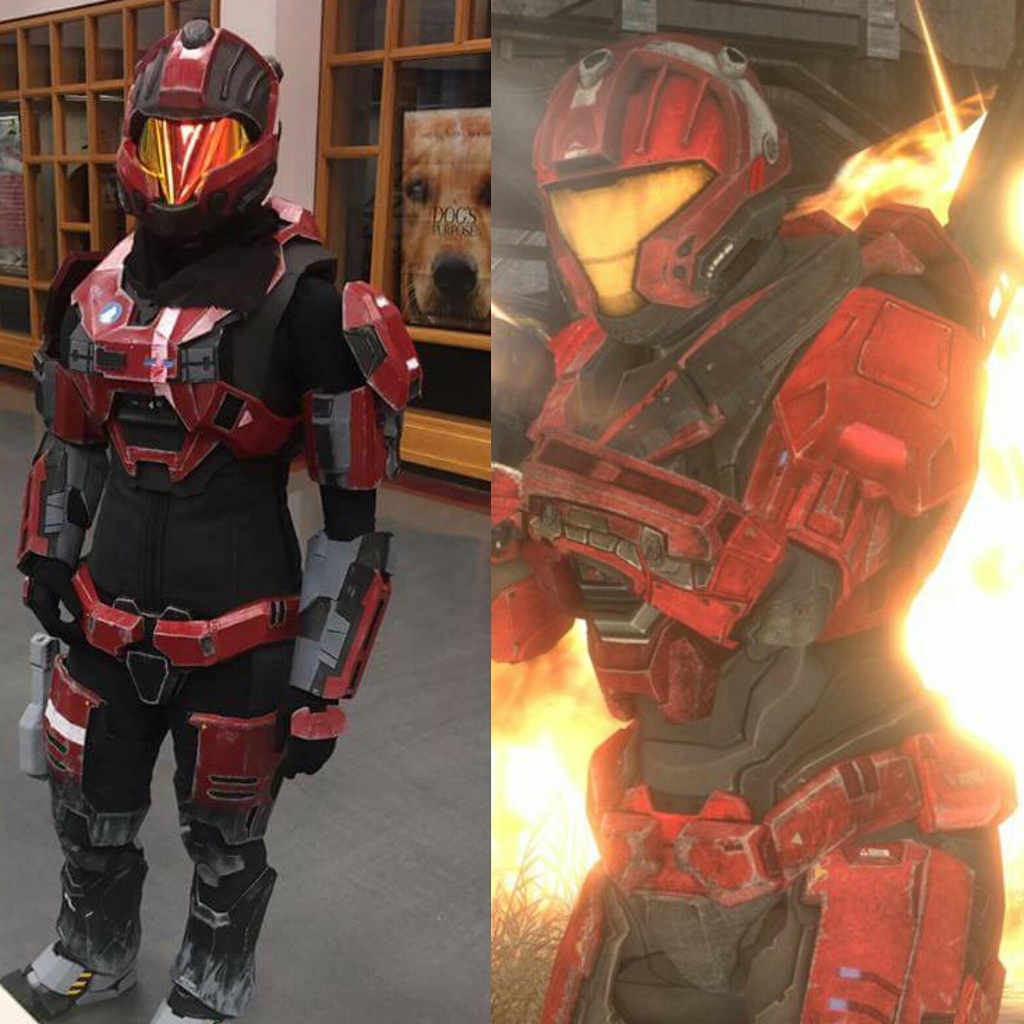 I would like to say my armor is done but I want to make another version of my chest armor to be bigger and easier to get into. Initially I was able to keep it a solid piece and "slip it over my head" but in 2016 I actually cut the sides of the chest to add some buckles. It gets the job done but I'm sure I could make it better.
I'll be starting the chest build soon and will try to update with pictures as I go.

Tifa117 said:
Thanks for the suggestion. I've been looking into what to use. So far a ski mask seems like the best bet but it'll be hot.
Click to expand...

You could always use a balaclava which would cover the neck, but still gets a might but toasty. On a side note Yay another New Mexico Spartan!

Southwest Regiment
This is great. What did you use for an under suit?

eiros said:
You could always use a balaclava which would cover the neck, but still gets a might but toasty. On a side note Yay another New Mexico Spartan!
Click to expand...

Thanks! I just moved to Missouri from New Mexico though... I went to a small con in Warrensburg, Mo a couple of weeks back, no Spartans.

But in New Mexico there's a really cool place that would be a perfect backdrop for some epic pictures. I think it's South of Farmington called the Bisti Badlands.

Dirtdives said:
Tifa117 great job of the re-do. They do make balaclavas that are just stretch nylon and breath very nicely.
Click to expand...

Thank you! I'm probably going to get one of those soon.

Distemper said:
This is great. What did you use for an under suit?
Click to expand...

Thanks! I just used underarmor longsleeve top and pants. I was looking at threads of people actually making an under suit to go with their armor and I'm thinking of pursing that route.

Updates! This time around is going a lot slower but I'm trying to incorporate crafting foam along with the EVA foam to make more room for lights. This torso is going to be a little bit bigger we'll see how it turns out. The tennis ball yellow squares are covering the sandpapered plastic that the lights will be going behind. So far in the front there will be four lights. I'm looking at pictures to see where I should put lights on the back. 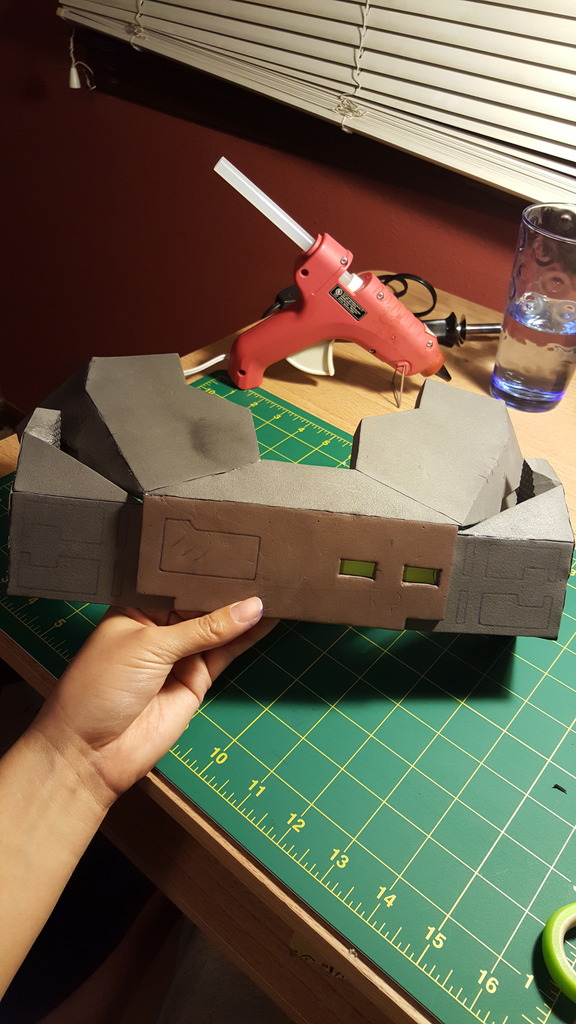 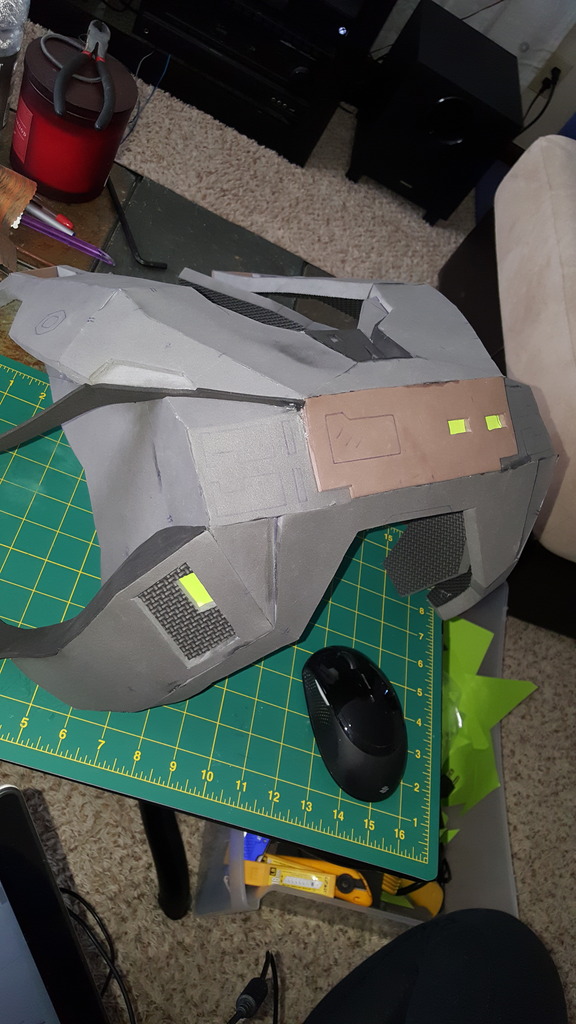 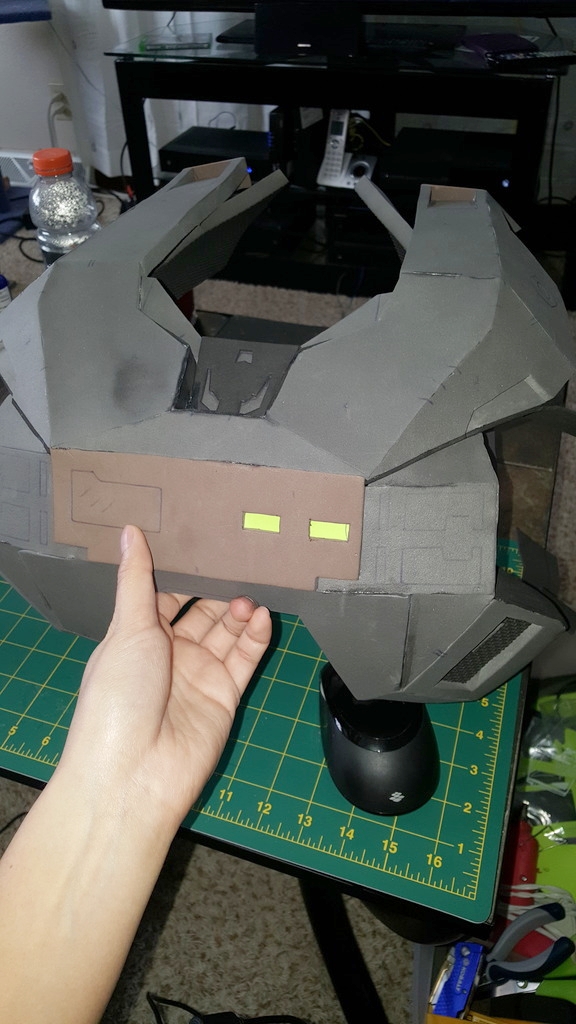 HALO SPACESHIPS, 3D printing all kinds of ships in the Halo array
5 6 7