It has definitely been a dogs age since I've posted a Halo build to this forum!

All foam is from TNT cosplay supply!

I've already collected most if not all of the necessary pep files for this project! and finished Foam pepping out Carters Helmet. 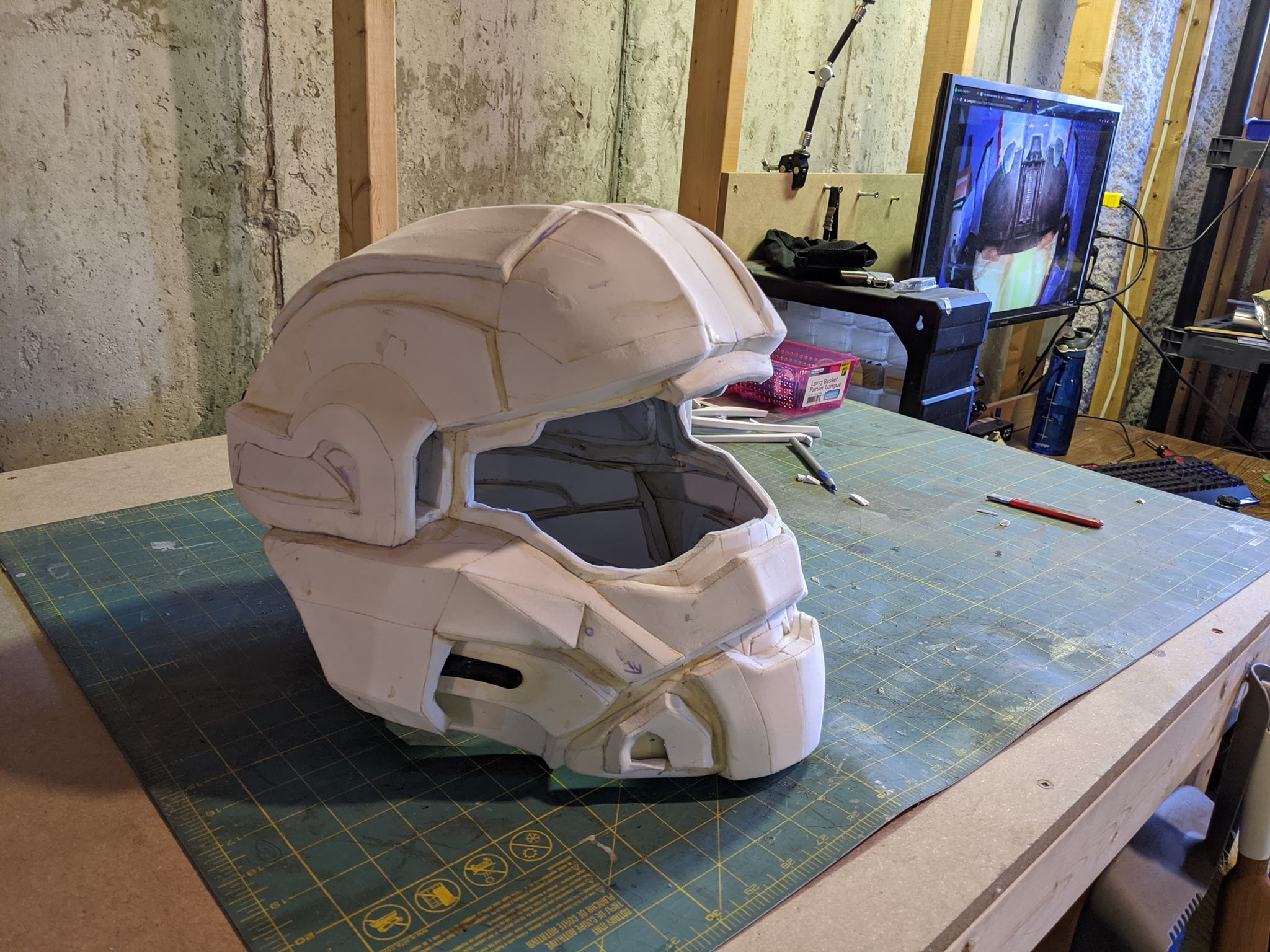 There is still a LOT of detail work to be done for this helmet, (Adding lights, finding a visor, and small fiddly bits) As for the pep I am actually quite happy with my edge work and seams for this build! a lot of them have come out as some of the cleanest I've been able to accomplish so far! 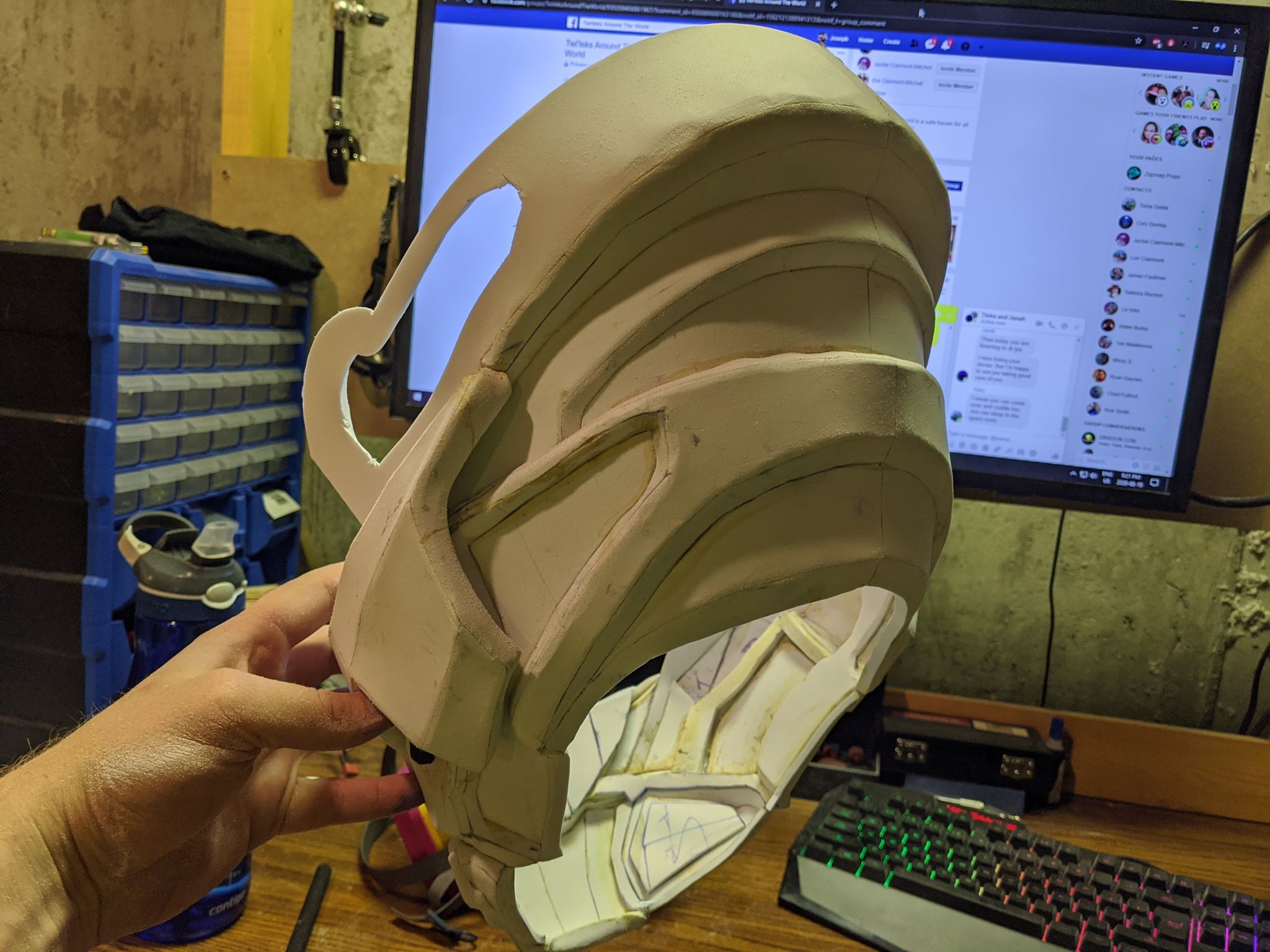 The Plan for the whole set of armor is to pep out the whole thing, and then I plan on actually resin coating the foam in hopes of giving it a more 'metalic' look.

This is somethin that I've accomplished in the past when I was working on my Garrus armor to what I thought to be great effect! so hopefully this one turns out to be just as fun to make! 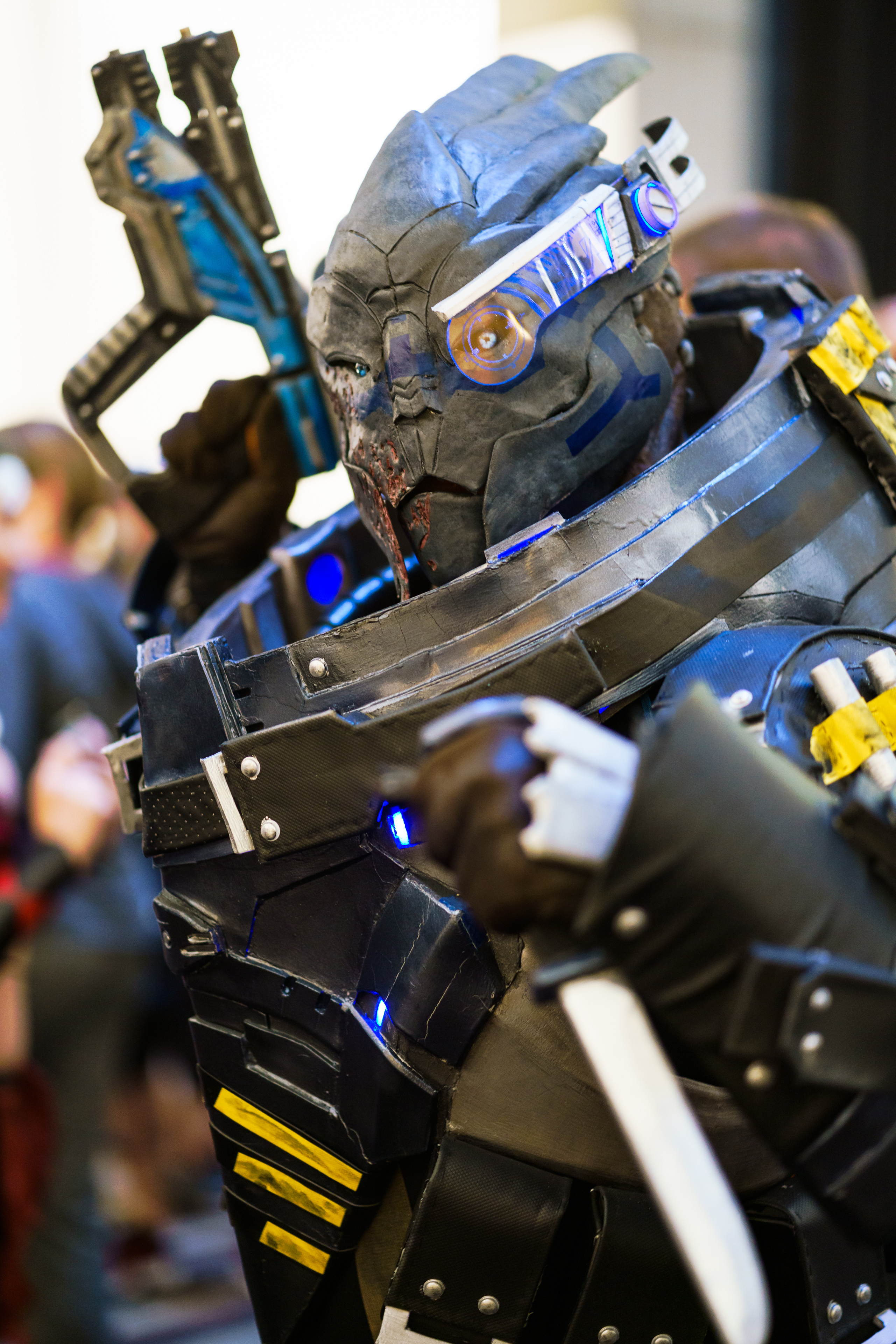 Anyway, As I wait for my next order of foam to arrive I hope that I can stay on top of this build here on the 405th! as I hope that we can all go on this build journey together!

Impressive work! and resin coating? Can't wait to see that!!

Southwest Regiment
What a very clean and crisp looking build!

How did this get posted without my noticing!?
Either way, watched

Australian Regiment
Oooh nice. Love that Garrus and the helmets are coming along well. How heavy/durable/expensive is the resin coating for foam? I'm considering it for a build.

Pacific Regiment
Its... beautiful! Are you making two armors for yourself or are you making one for a partner or friend?

It's definitely been some time since I've started this thread, and no. It's not dead, it's just been crazy times! And still this project slowly plods along.

As of writing t his I have finished working out the Torso armor and upper arm armor, as well as two pistols! 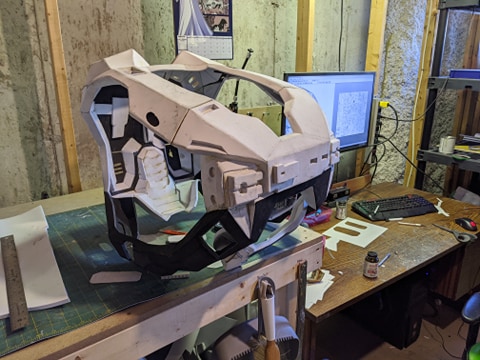 I decided for the torso build that I wanted to incorporate some High Density foam (Black foam) into the build, especially along those lower structures going under the arms. I've noticed that when using standard EVA foam these area's will start to bend and warp far sooner than I would like. So far, The denser foam allows it to support it's weight without bending at all! I'd definitely recommend this to anyone who's looking for a way to up their building game! 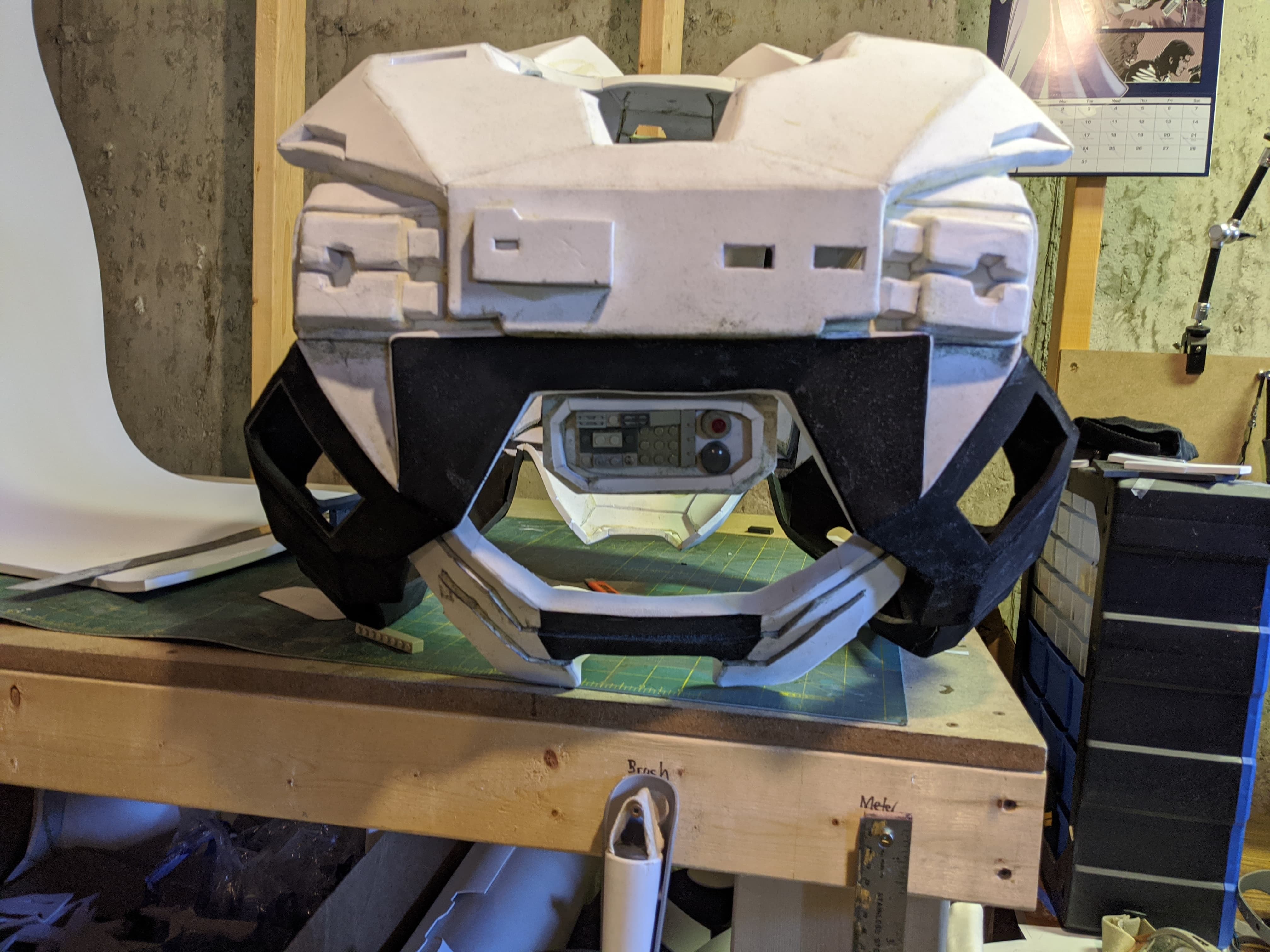 I know it's not completely accurate, but I've always tried to add Lego to my builds, I don't know why It's just one of those things 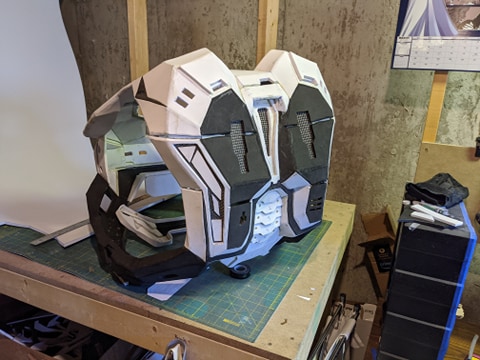 I think that out of everything in this build so far that I'm proud of the most, it would have to be the back of the torso. It just came out looking quite clean, and the level of detail (no matter how long it took to make ) is quite satisfying to look at. Also, I wanted to add in a bit more texture to the build, so in the recessed parts along the back of the torso I decided to add in some Cheese cloth to make it look almost like some kind of vent meshing. 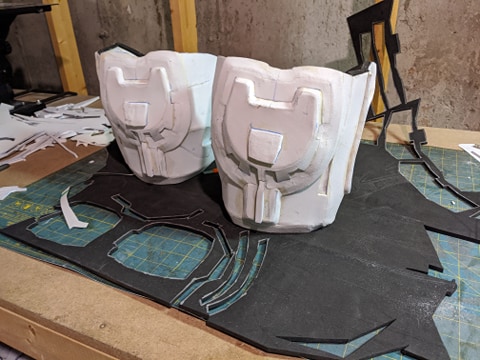 The shoulders were pretty straight forward, I am slightly concerned that they are slightly too big, however my arm does fit in through the bottom opening quite snugly, I feel that going any smaller will make them not fit without significant modification. 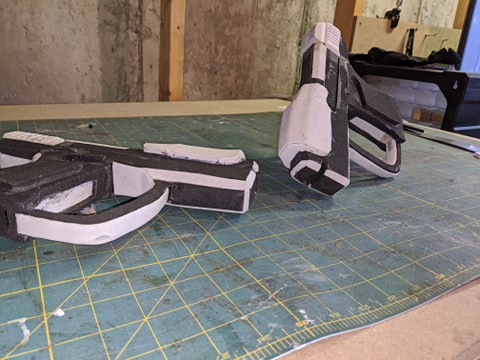 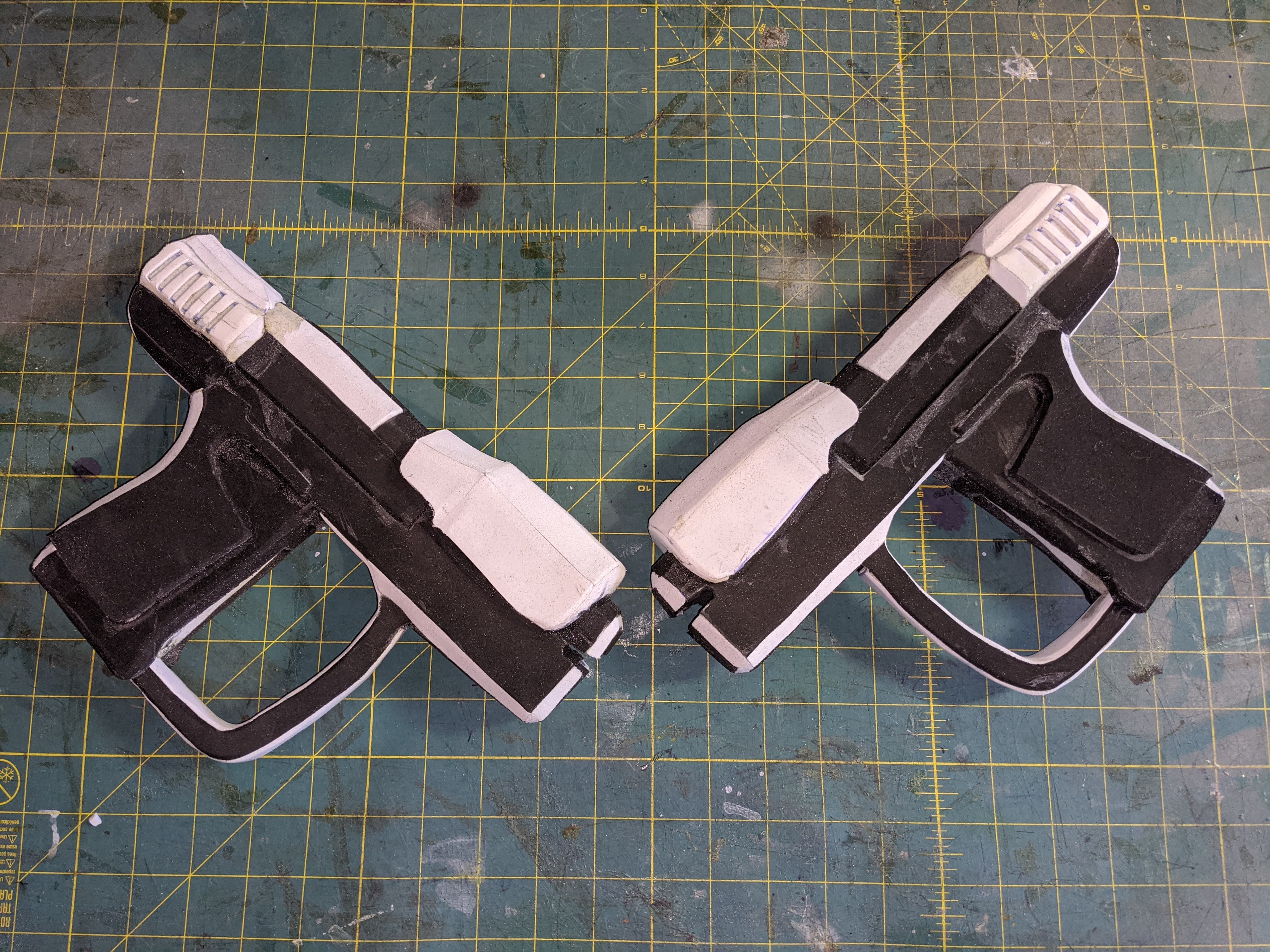 And lastly for this update is my pistol builds. (Built two one for me, and one for my Girlfriends eventual Kat build whenever we get started on that)

These pistols I really wanted to attempt to build them out of foam using a Pepakrua pattern, I was curious to see how much different this was compared to building them in the standard way of layering foams. I will say that this method took drastically longer then it would have been otherwise, I am happy with the way that these turned out even if they have a bit of a twist in their construction. Again using HD foams alongside standard EVA makes them surprisingly rigid and less floppy then I had antisipated. All that's left for these guys is a bit of detailing, and adding in that laser unit to the bottom of them.

SO! in summary I'm still trudging along with this project, even in these trying times.

I hope that all of you are staying safe, and that you enjoyed my little update!

PlanetAlexander said:
Oooh nice. Love that Garrus and the helmets are coming along well. How heavy/durable/expensive is the resin coating for foam? I'm considering it for a build.
Click to expand...

Thanks for the compliment. As for your question: Resins are one of my many go-too's when it comes to coating EVA foam. I find that they work quite well when done properly. Though they definitely can have their downsides if you aren't careful! Make sure that if you are using this method to make sure your measurements of the resin is bang on correct, and that it's mixed together perfectly, If not, the resin will NEVER dry, and you will have a sticky gooey mess to the point it's usually easier to just restart. That being said, Resins are also not flexible, and will crack/fold on some pieces, when this happens those folds/cracks are perminant (unless you fill them in) unlike some other methods where you can apply heat to remove creases.

ButterBacon3000 said:
Its... beautiful! Are you making two armors for yourself or are you making one for a partner or friend?
Click to expand...

I will be building two sets of armor. one for me, and one for my girlfriend. We usually work on projects together! and hopefully when her current project is done, I can start updating you guys on her version of Kat!