Excuses in advance for what's probably going to be a picture heavy thread.

After spending a lot of time on pepping a halo 4 ODST suit, and wholly failing to keep the thread updated (it's getting there I might drop some updates in here at some point), I've been dragging my feet on getting another project started.

In the time between starting on the ODST and the present, I managed to acquire my greatest joy and bane in life. A 3d printer, specifically a cr-10. And have used it, sometimes more successful than others, to make some props to go with my odst suit.

But a thought struck me, if I can print weapons so too can I print armour. So I went forth and got my mitts on some files for the Halo 5 Noble armour. Sans helmet for which I will be using the Reach Carter helmet modelled by our very own Moesizzlac (Check him out on Thingiverse he's doing some great work modelling all kinds of cool stuff).

To summarize an increasingly lengthy post. I'll be using this thread to detail my advances in 3d printing my second suit of armour. And like any build, since I'm definitely not spartan sized, this adventure starts with scaling. For which I'll be using armorsmith designer (Lovely piece of kit). 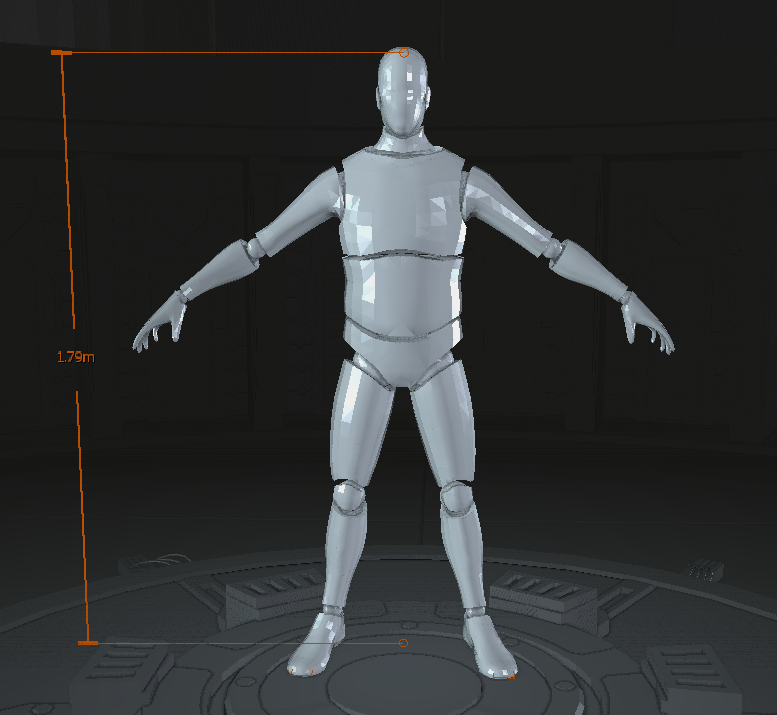 The first thing I did was loading the different pieces straight into Cura and see how they were oriented and such.

then I threw them into mesh mixer in an effort to make some of the pieces a bit thinner to make them a bit roomier, starting with the gauntlet. I think I did pretty okay. 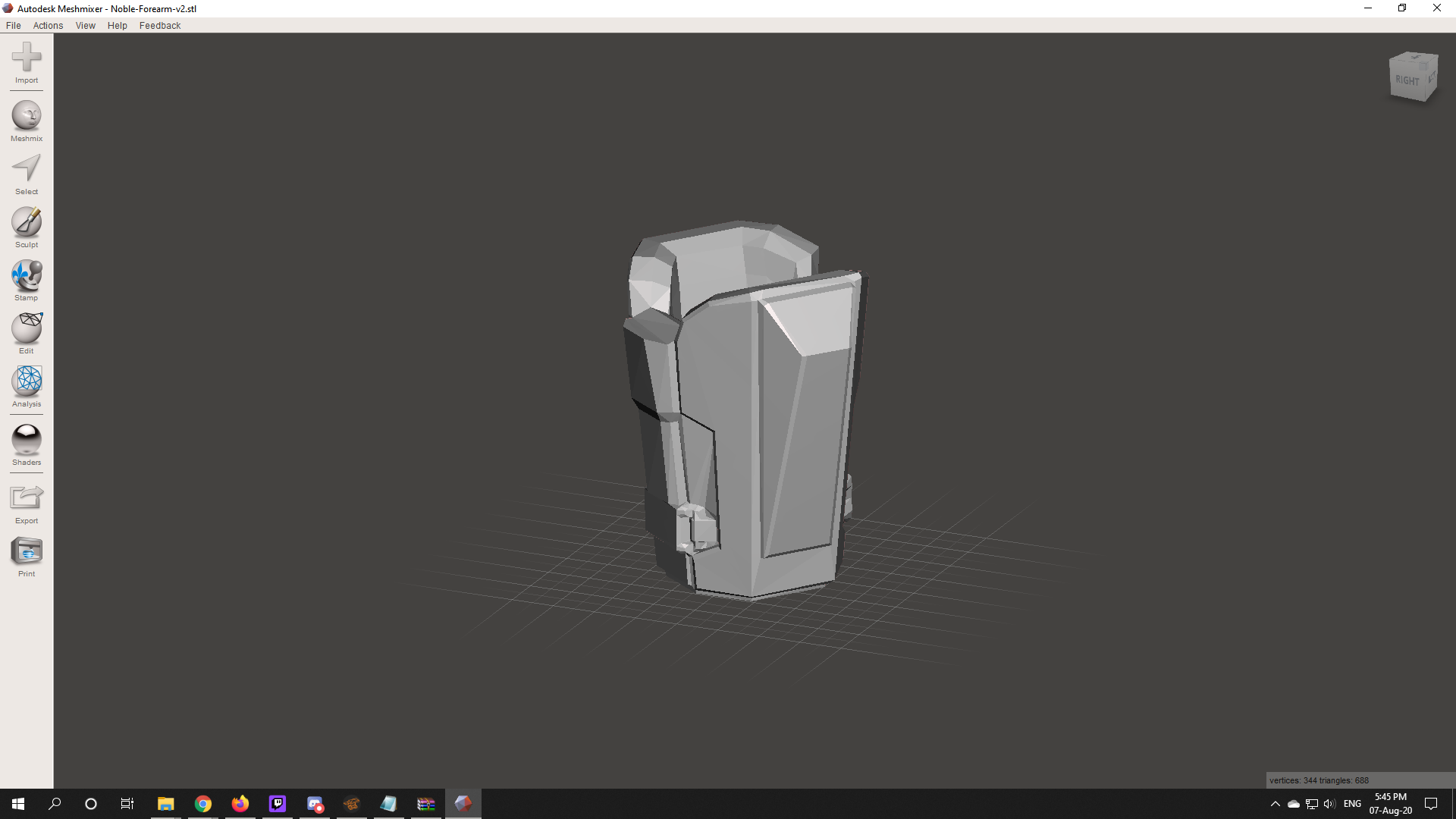 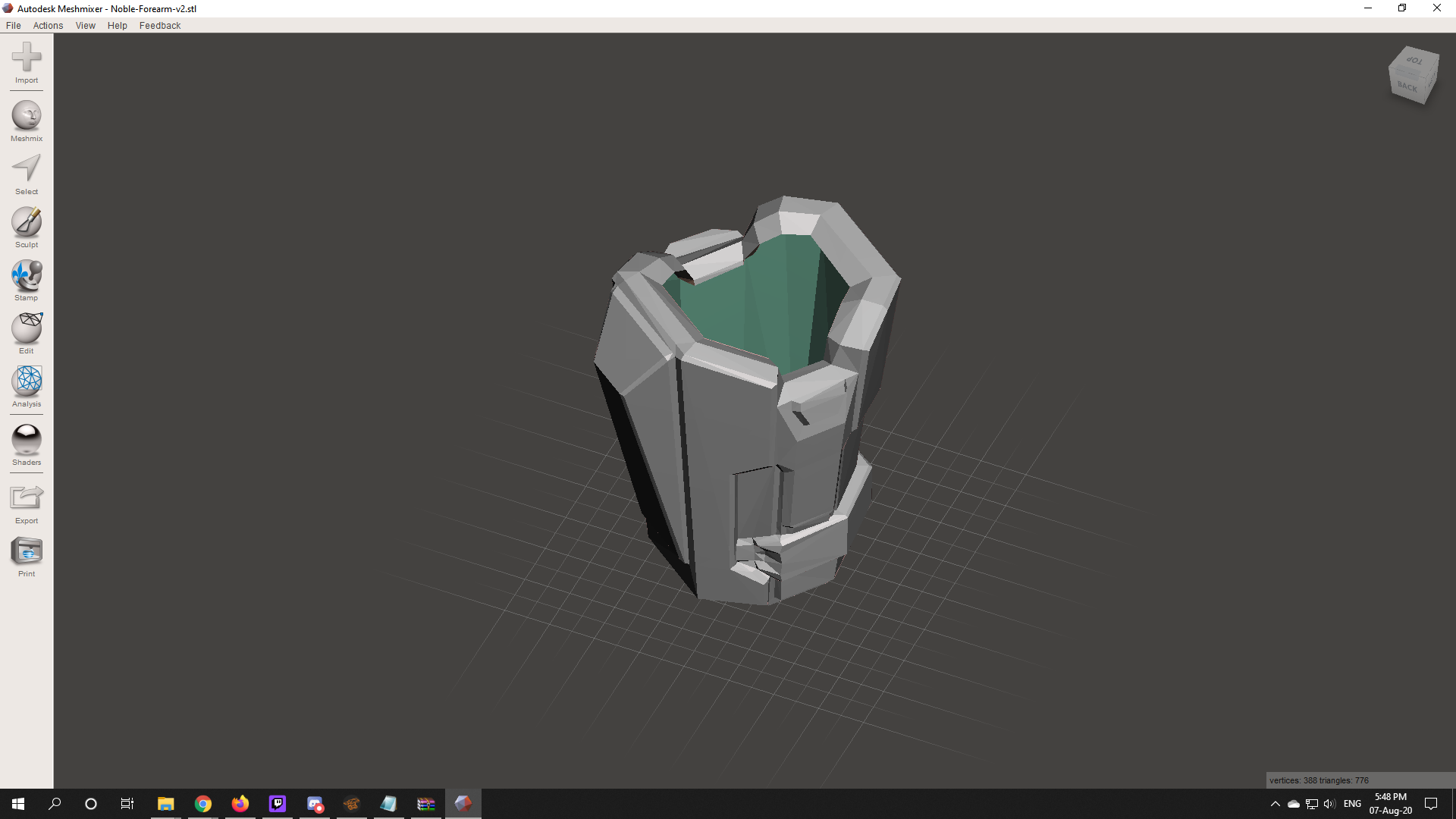 The wall got a bit thin in this section but that should still be fine. 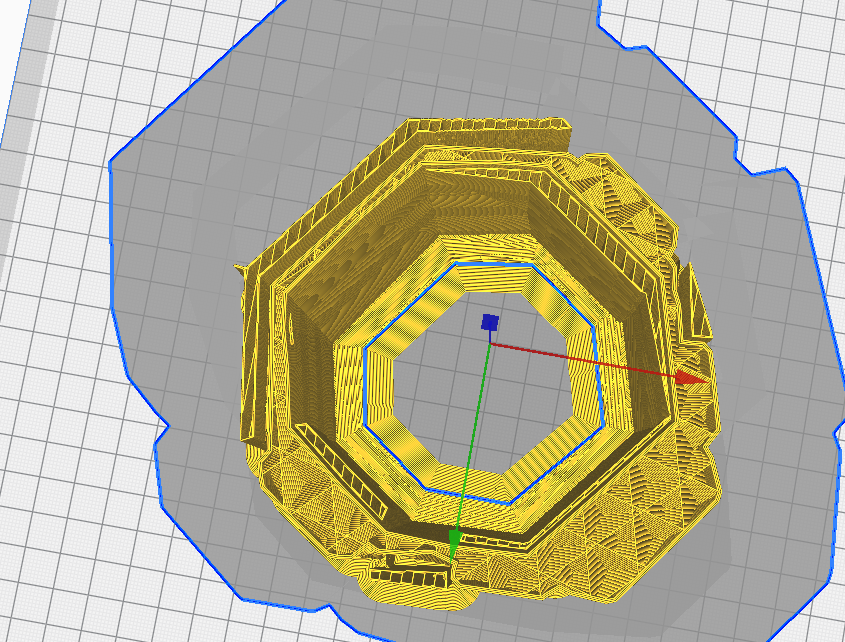 After some smoothing out on the top of the forearm it was time to ensure it was properly scaled before cutting it up further to reduce print time and allow for the inclusion of magnets. 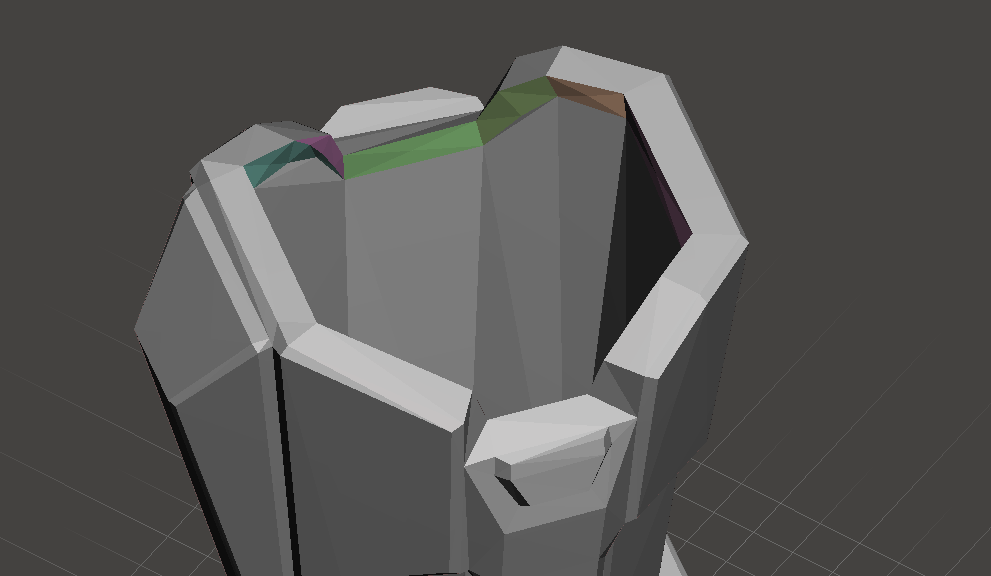 And we're back with the first update. Upon scaling I found the width and depth were pretty on point already so I left those alone. But I did stretch the entire piece so that it would look/ sit more akin to the concept art I've been going off of, it also makes it look a bit sleeker. (This was also the part where I realised I had the wrong side facing up.) 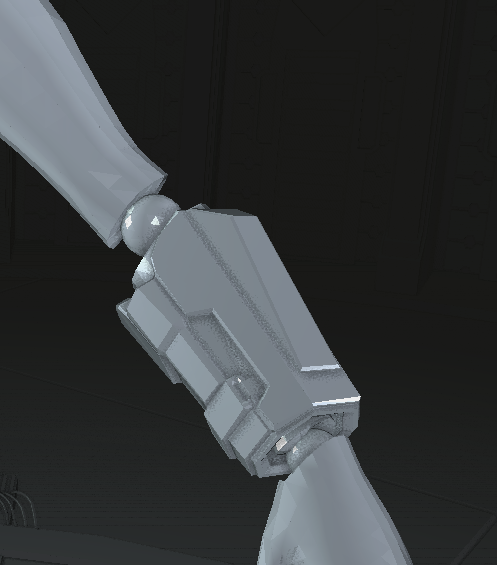 That was easily remedied by attaching it to the other arm though. 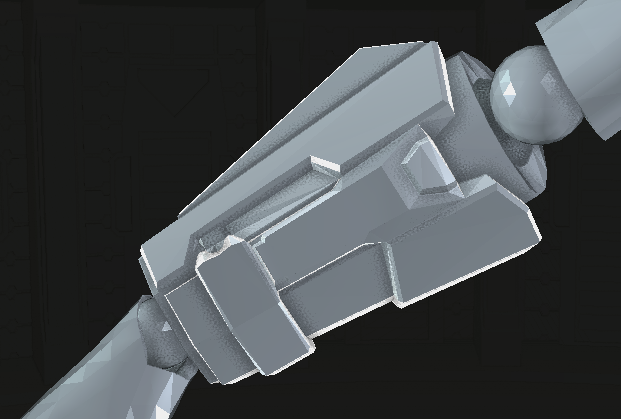 This was also the time where I started looking at the elbow. Which had decided that the tiny life was where it was at. Using pepakura designer's measuring tool I managed to figure out the elbow had to be scaled up by roughly 1744%. 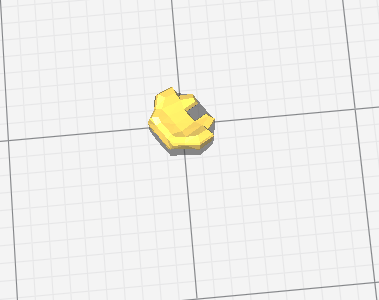 Next thing I did was to get back to the forearm and start dividing it up. I chose to divide it into six parts after I had chosen the spots for the magnets and cleared those out. I've added some alignment pins for good measure, choosing to go for 4x4x12 mm for the pins. 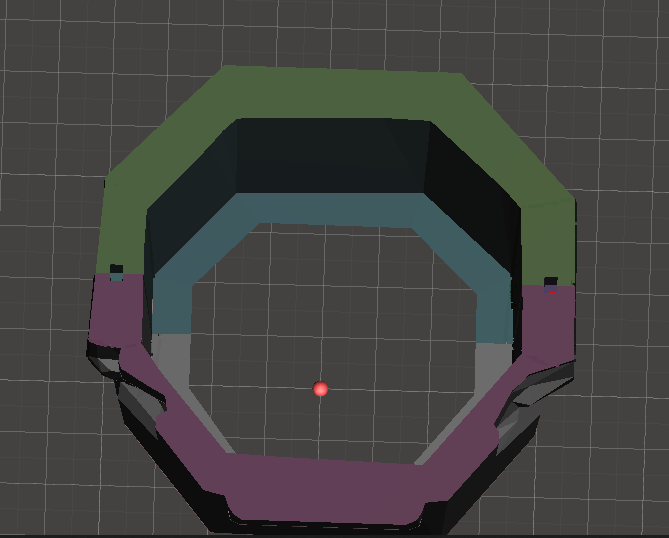 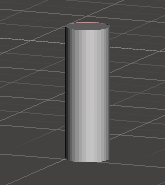 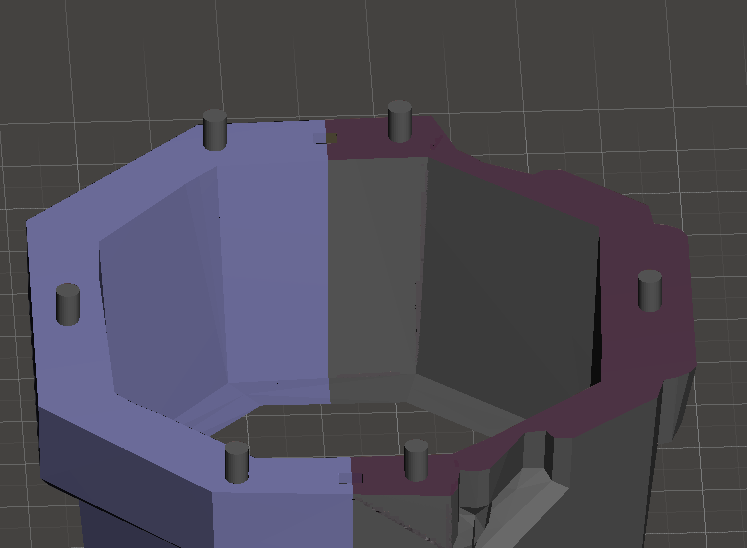 And after some shape-preserving reduction magic, I managed to knock the file sizes down considerably and the pieces should be ready for a test print.

And that's that for this time around. Cya all in the future with more updates.

And here we are with the next instalment of "What will we **** up this time!".

First thing I did was print two sets of pins and started my first print on the forearm, choosing to go for white PLA since the current paint scheme I have in mind is a primary of white and red as a secondary. But as with everything that is liable to change.

While my printer did its thing I decided to take a look at the now correctly scaled elbow. Throwing it into meshmixer was the first step and all I had to do was sink the face in a little, this left it with some wall thickness still and a nice hollow for my to put any kind of rigging into, although my current idea is to just glue/join it to the forearm and calling it a day if that proves to be good enough. 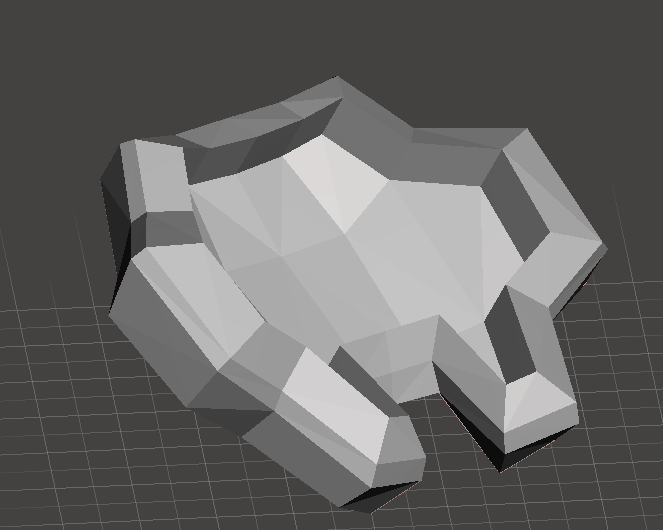 And after some test prints, I had a functional elbow piece.

In the meantime, the gloves arrived but they were, to put it lightly, subpar. So I'm still working out how to do those, any suggestions are more than welcome.

The next things on the agenda are to get the forearm printed and to scale the bicep/shoulder along with the helmet. And dividing those as necessary.

Koentju2 said:
And after some test prints, I had a functional elbow piece.

That is quite the progressions in prints! Looks really good.

Koentju2 said:
hoosing to go for white PLA since the current paint scheme I have in mind is a primary of white and red as a secondary.
Click to expand...

Are you still going to paint the PLA or just leave it raw?

MrJamin said:
That is quite the progressions in prints! Looks really good.


Are you still going to paint the PLA or just leave it raw?
Click to expand...

I'm planning on painting the PLA later when I have the full suit pieced together. After some obligatory sanding and priming of course.

Koentju2 said:
After some obligatory sanding and priming of course.
Click to expand...

Looking forward to seeing your progress!

Nice, which suit are you aiming for?

And thanks, I'll try to remind myself to keep taking screenshots to update the thread periodically whenever I make a decent chunk of progress.

I recently got a 3D printer (Prusa i3mk3s) and after finding the files from MoeSizzlac and helmet from Rainyfire on Thingiverse I decided I might want to print my own set in the future. The real push over the edge was stumbling on the full post of the build by JGPenland (found the cosplay...

(I've been working on it since last November)

Edit: It has been a ton of fun and I have learned a ton (thanks to many members here) getting to my current point. Please do not hesitate to ask questions!

Welp, we're back at it again and it's a big post, in the time between the last post and this one I managed to find some gloves that fit my criteria. They're originally meant to be used to play golf but they'll probably work just fine for my goal as well. Besides being Spartan gloves is a much better fate in my opinion. 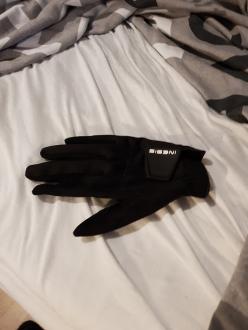 (The **** lighting makes the glove appear as a void, phone cameras amirite.)

As such I went forth and got to scaling the files for the handpieces, going off some rough and easy scaling this time with a good ol fashioned ruler and scaling directly in Cura before exporting it to the octopi. The back cover was pretty easy to scale and I then moved to the index finger, the magic proportions for me seemed to be 80.81% But I made a test print at 100% as well for comparison 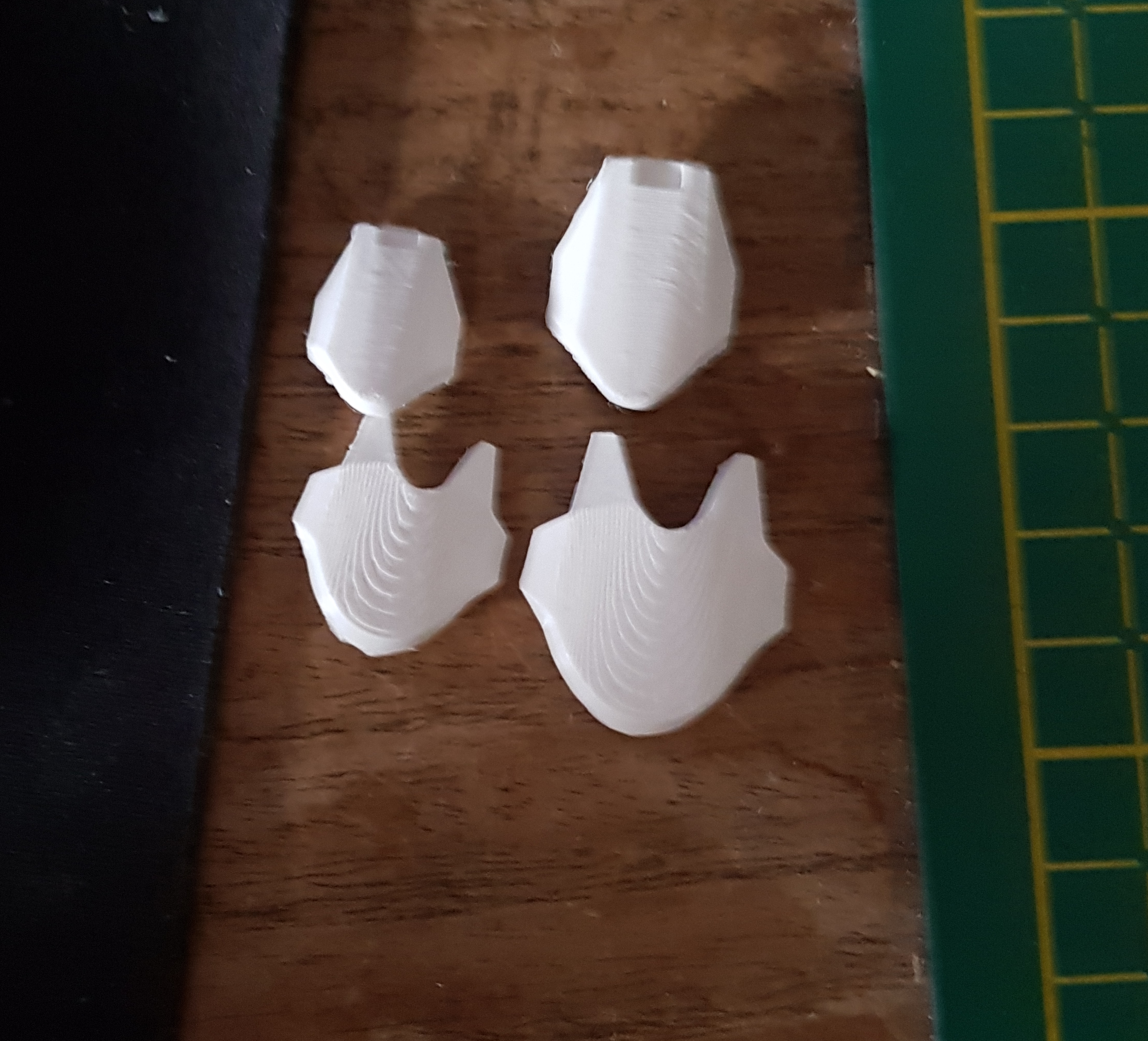 Seeing them side by side like this, personally, I'm leaning more towards the 100% ones.

In the end, everything but the fingertips were printed at 100% 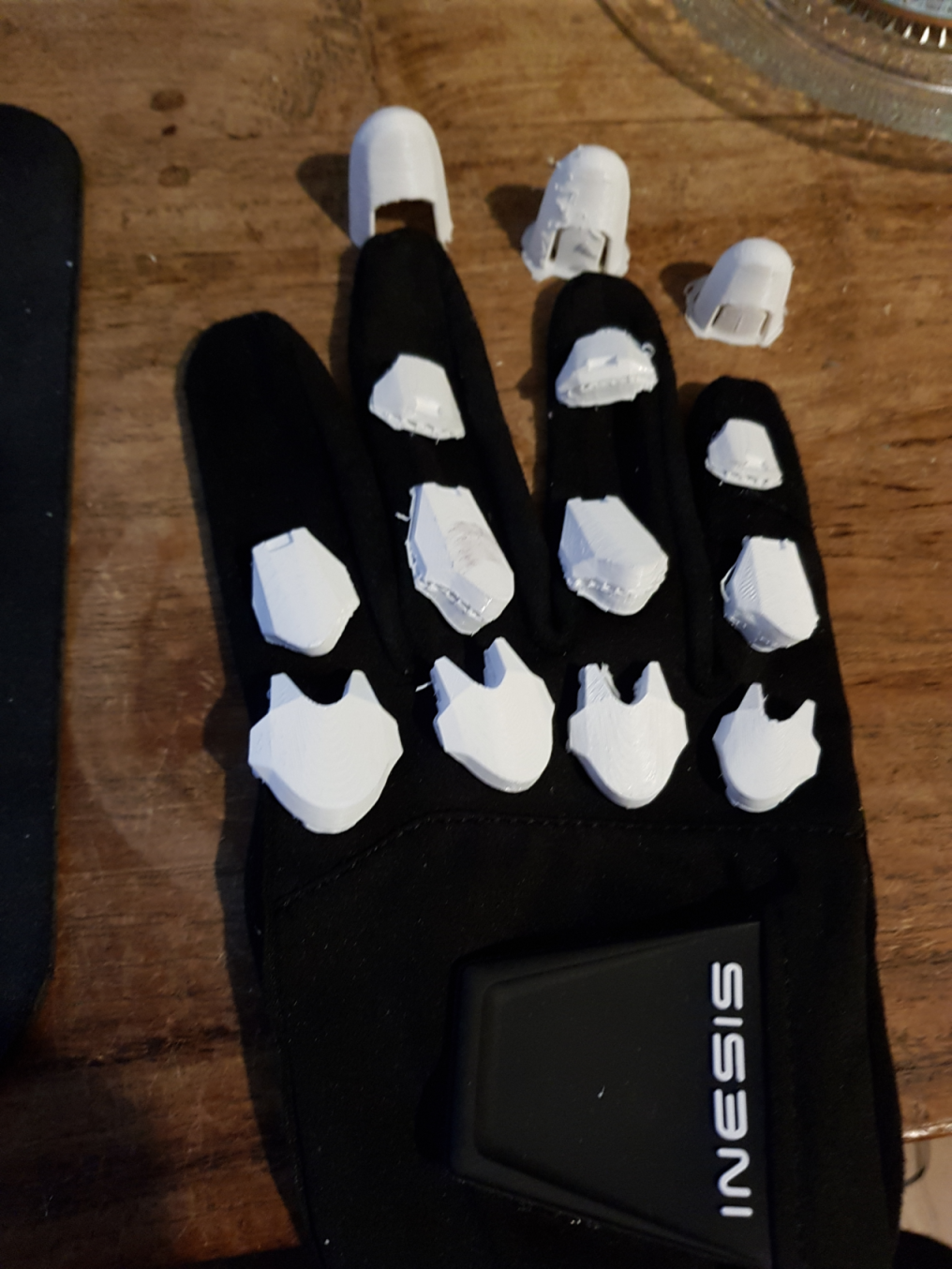 The hands should be set for sanding and painting, afterwards all that's left is attaching it to the gloves so the next step there is to find a suitable glue for that, for which I'm leaning towards a decent hardware glue.

The next thing I decided to work on is, arguably, the most important. The bucket.

As with any piece I first threw it into armorsmith to get a proper scale, before chucking the scaled piece into meshmixer for any required adjustments. Because the helmet has a pretty big volume I decided to cut it into several pieces for ease of printing. 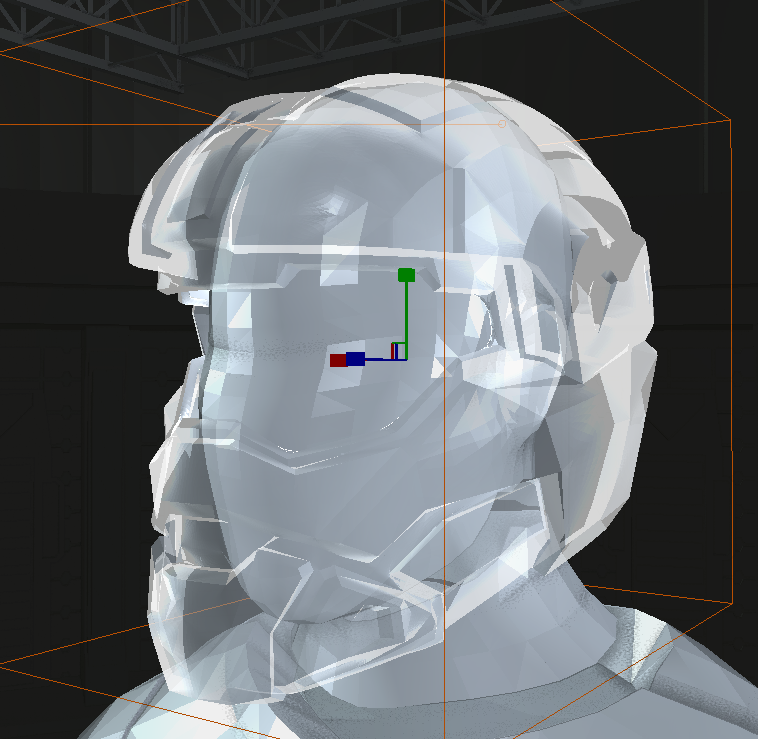 The helmet was giving me a bit of issue in mesh mixer but I got past the issue eventually. I had to make the model solid before slicing it up because otherwise, meshmixer would return non-manifold parts. 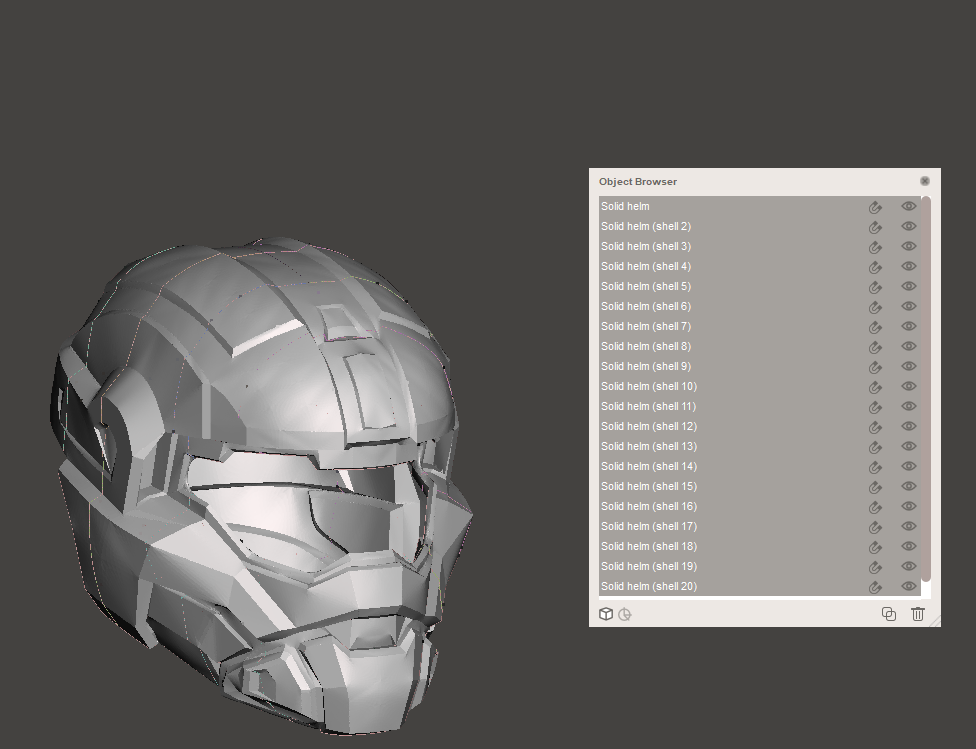 After I sliced the helmet up I began the test printing, on something I've coveted for quite a while now. An upgrade to my old 3d printer. 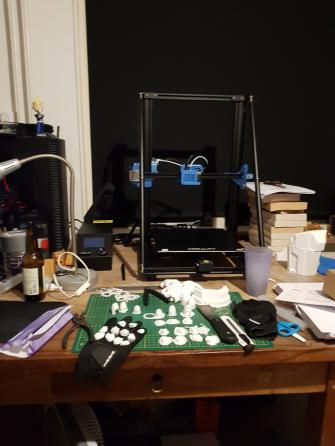 I was not disappointed, the quality of prints made by the new printer versus my old one is leagues apart. As such, I decided to reprint the few forearm pieces I had on the new one.

After I had these new pieces I did a bit of test fitting and realized I wasn't really happy with how I had designed my clamshell, it could still slide freely regardless of the magnets and the fit was pretty tight. So I decided to reprint them at 110% scale and looked into a way to lock them in place.

Aside of this all, I'm thinking of (and probably will end up) switching the project to a master chief suit due to the files of CarterBuilder being downright amazing. Reach build. 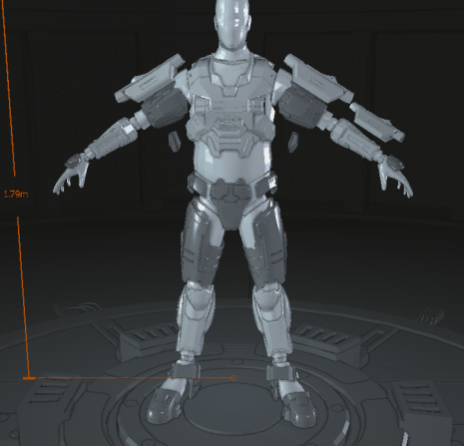