I didn't know what to expect with that short intro at the E3 conference...but this trailer looks pretty amazing! The only thing that makes me sad is it's not the chief's real voice...I think.
[video]http://www.gametrailers.com/videos/bsk8e8/halo-4-forward-unto-dawn-trailer[/video]

Pacific Regiment
It's his real voice for this time period. Apparently it was an intentional choice to not use steve downs voice since this is set far prior to the events of the first Halo game and they wanted a slightly younger sounding chief.

Dan ('colossus' in XMen) wears the Chief suit the whole time apparently. Very impressive considering how uncomfortable it could be.
R

Pacific Regiment
i think it seems pretty cool but i wish the did the real chief voice, that would make it sound pretty cool

At least we can tell that director and writers took the time to take into account that it is set back, and we all noticed that detail so at least they're trying.
Let's just be appreciative that they've taken the responsibility and the weight of this project onto their shoulders, even the director said he was scared shitless and missed sleep over the fact of having to make a small series based off such a huge million fan story.
i thought it looked very well, kinda strange seeing the training troops with flak jackets on it almost looked like one of those COD commercials haha but really
it looked great i thought it was funny that girl from hungergames was in there, terrible with actor/actress names but i thought she was good in that movie.

Just awesome. wanna give you a special thanks. Thanks buddy.

hyundai2806 said:
=
i hope SOMEONE takes it unto themselves to go outside live action trailers and short series and commit to a MOOOOOVVIIEEEEEE
Click to expand...

From what I've heard Microsoft wants a butt load of money for a studio to actual make a Halo movie, but hopefully Forward Unto Dawn will show them that people really enjoy this kind of thing and go all the way!

What I don't get is why the armour is so different to what we all have been making?
X

Xtremenoob said:
What I don't get is why the armour is so different to what we all have been making?
Click to expand...


It's nothing new, it's the same armor he wore in Halo: Legends. Compare the shoulders chest, and helmet: 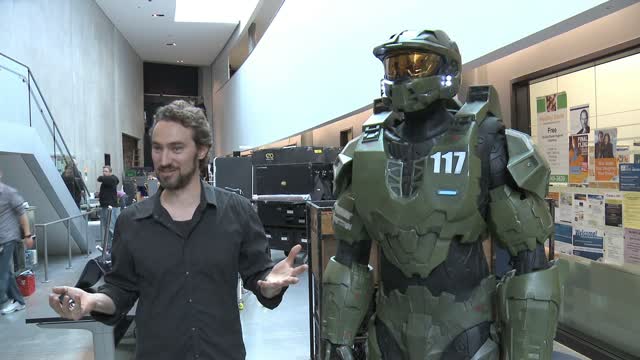 (I assume you were talking about the Chief, not the marines.)

Pacific Regiment
Has anyone unfolded this in pepakura I kinda like the chest piece and all?