gingersnapples said:
true, but most conventional sights are low to the gun, and not all soldiers are sent into the fire with a enhanced sight.
regardless if its EOTech or a reflex sights, the user might find difficulty in placing shots without the use of sights. (unless he has a 'gun cam' attached to his gun and a live feed moniter mounted to his helmet, of course)
Click to expand...


Ok, well lets for arguments sake, assume, that if a soldier gets to wear a multi million dollar super suit, they are going to have whatever advanced weapon systems they want. There are also long eye relief scopes that have iron sights built on top of them for higher clearance.

I'm actually wearing a kevlar helmet & body armor as I'm writing this, and I really dont see any major problems with being able to aim proficiently. A gun cam is something I'd like to incorporate eventually, but that would be a lot more visually disorienting than you'd think, unless your using it to aim around corners, its just going to distract and disorient you as you move.
A

How did you go from wanting to trade carbon fiber for molds to this? Well, at least you took our advise and decided to make your own suit.

This sounds very close to Troy Hurtubise Trojan Exo-Suit. He also wanted the military to use his design, but turned him down because of the price for each one. For the same price to make a hand full of suits they could train thousands of common soldiers. Not bashing your idea, i thinks is a good idea. Defiantly more piratical then other real suits iv seen here. Just some food for thought. I hope you can pull this off

Heres a picture of his suit 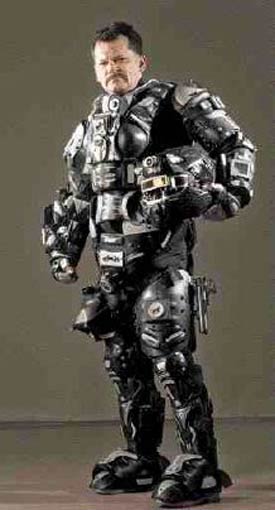 I would still like a classic halo style costume, but like I said, I dont have time to build a fancy toy, nothing really functional could be made from a halo costume.

This project however is not to build a toy.

And that guys suit isnt anything more than a hodgepodge nightmare of modified dirtbike armor covered in tons of gadgets; it will not do any of the things he claims in his videos, it would not stop bullets (well maybe if they are thrown at the suit), and it in no way would stop an IED. They certainly did not turn him down because of price, but because it has zero functionality. Its not made with ballistic material, its not air tight for chem / bio weapon resistance and it would be damn near impossible to get a NBC suit over it, its not load bearing, it has a million and one things to get snagged up on, its a costume on steroids.

I'm not expecting this to be general infantry issue any time soon, would be analogous to the spartan program vs the marines at first. The military wastes a ton of money every year, and I think if a suit was made that had extremely high functionality all around, that they would see the money they could save on medical costs alone would make the suits worth while. Plus with mass production comes a huge reduction in price.
A

Very true. I dont know the full details of that suit. Its been a white since iv read about it.

I wasnt saying your build was going to be like that. It just reminded me of the principle. Im interested to see where this build goes. You seem to have better resources then other people.
B

No problem, I just see red every time I see that suit.

There have been a lot of situations in life were I've wound up having to work 10 times as hard to do something, because someone else made such a mess of the idea and completely killed interest in the area, by generating a ton of publicity for something that just plain doesn't work and even people with no knowledge of the subject will see that.
R

i know ive been asking some questions through pm's but im keen on ur ideas. id love to help out, the best a aussie can anyway

I'd also love to see where this goes. I'm from a military family, and I've been imagining a Mjolnir-type suit for our boys and girls in harm's way. I know if I were to create such a suit, I wouldn't sell it to the military for much more than it costs to produce; I'd want our military to be completely safe before I got rich. Enough with my rambling, on with the building!

Any pics or sketches of the load-bearing suit?
S

One thing I've noticed about Halo-style armor concept or not is that the rifles are being pulled more in to the Bicep or goes through the armor. Its just something I'd like to point out seeing as how your supposed to pull your rifle's butt into your shoulder.

Sgt. Freezer said:
One thing I've noticed about Halo-style armor concept or not is that the rifles are being pulled more in to the Bicep or goes through the armor. Its just something I'd like to point out seeing as how your supposed to pull your rifle's butt into your shoulder.
Click to expand...

I think that's more of an issue with the game, not necessarily the armor. I could be wrong, but I think I've seen pictures of members in their suits holding weapons at their shoulder. If indeed I'm wrong, just moving the outside of the chest armor in towards the pectoral area should solve the problem.
S

Yeah brought that up thinking the fanciest armor is pretty much useless if you cant properly use your rifle.
B

The price would vary depending on how much tech is packed into it. There obviously could be different models, but it would be safe to say, that as soon as the technology was viable, that special forces would have it first, and they would have the version thats got the highest specs crammed into it.

We are now at a point technologically where small RC planes can broadcast high quality color video with GPS HUD overlay, with facial and object recognition technology. There is no technological barrier from some manufacturer, creating a gyro stabilized shoulder turret that could target enemies and fire on their own.

And this armor is being built around a person first, not drawn and 3d modeled around some fantasy hero proportions. If something doesnt work, or needs to be tweaked, its going to be fixed long long long before it ever makes it to molding.
B

And yea I have some drawings but I need to digitize them. Basically the load bearing 'bones' are going to be hollow, and interlinked, so they also act as the air ducts.
B

Heres a digital sketchup of what I'm thinking for the load bearing core, also functioning as the air transport system, as well as an additional level of impact resistance for vital areas.

The compressive suit would have areas highly reinforced, and harness like webbing, so that you are totally connected with the armor, not just bouncing around inside it.

I like it! I love how the skeleton is multi-function also. I noticed that there are no "bones" for the arms. I would assume a similar workup like you have for the legs would suit the arms, with the elbow being protected like the kneecap if you planned on having arm "bones". I'd also like to see how the joints function in real life.
It looks to me like the armor pieces could attach directly to the skeleton. This would simplify donning the suit and make damaged parts easily replaceable.
I'm certainly looking forward to future updates!
G

btac said:
Ok, well lets for arguments sake, assume, that if a soldier gets to wear a multi million dollar super suit, they are going to have whatever advanced weapon systems they want. There are also long eye relief scopes that have iron sights built on top of them for higher clearance.

I'm actually wearing a kevlar helmet & body armor as I'm writing this, and I really dont see any major problems with being able to aim proficiently. A gun cam is something I'd like to incorporate eventually, but that would be a lot more visually disorienting than you'd think, unless your using it to aim around corners, its just going to distract and disorient you as you move.
Click to expand...

well, actually, come to think about it: the corner shot does use a gun cam to shoot around corners.
B

hmm my previous post didnt go though. I tried to print out some files in pepakura, came back, and there were 15 pages of solid black cardstock. No clue why. Finally got it working and printed out the patterns for a helmet, and taped them together to use as a sheet metal cutout pattern. With any luck I'll be able to get the parts cut from stainless tomorrow. Kind of makes me want to do a full sith trooper armor set from KOTOR, in polished stainless.
G

hmm... wonder why that happened. can we see some pics of th model you were using?

gingersnapples said:
well, actually, come to think about it: the corner shot does use a gun cam to shoot around corners.
Click to expand...

Yeah, that's how it works. It's basically a 9mm pistol and camera mounted on a swiveling rifle-type stock. I agree with btac that a video feed to the helmet would be distracting and disorienting. As you move, you would either be seeing the ground beneath you, or a smaller view of wherever your gun was pointing. If you were moving according to what you saw on the cam, which wouldn't have as wide a view as your normal vision, you might trip over something the cam didn't show you. Think about it like this: Imagine wearing something over your head that only had a two inch by two inch square hole in the middle of your face. Or you could think of blinders on a horse. You'd miss alot of surrounding detail which could be crutial.
B

I printed out the pep for the H2 ODST helmet as a base layer to work with, and im going to mod it by hand, basically cut the top part off from the visor to the middle of the helmet, and make a different version that matches the taper of the jaw guard, that's on a pivot, so the visor can be closed, to act sort of like a blast shield, then transfer it to sheet metal. I'm probably going to have to print a larger version since this one seems kid sized.
A

Interesting. Can't wait to see where this goes. I've considered for years doing something along these lines but only got laughed at by ney sayers til I found this site. Creative criticisms can only help improve a project. Best of luck to you.

A
First Armor: Which to make?