CortexZerks said:
OMG, this looks so beautiful, are you planning on standard colouring or planning on moving into your own unique colour?
Click to expand...

I've got this large can of olive green paint, that's darker than Chief's color, but It'll do nicely.

I have started the painting process. This means lots of sealing and detailing, but I'm making good progress. 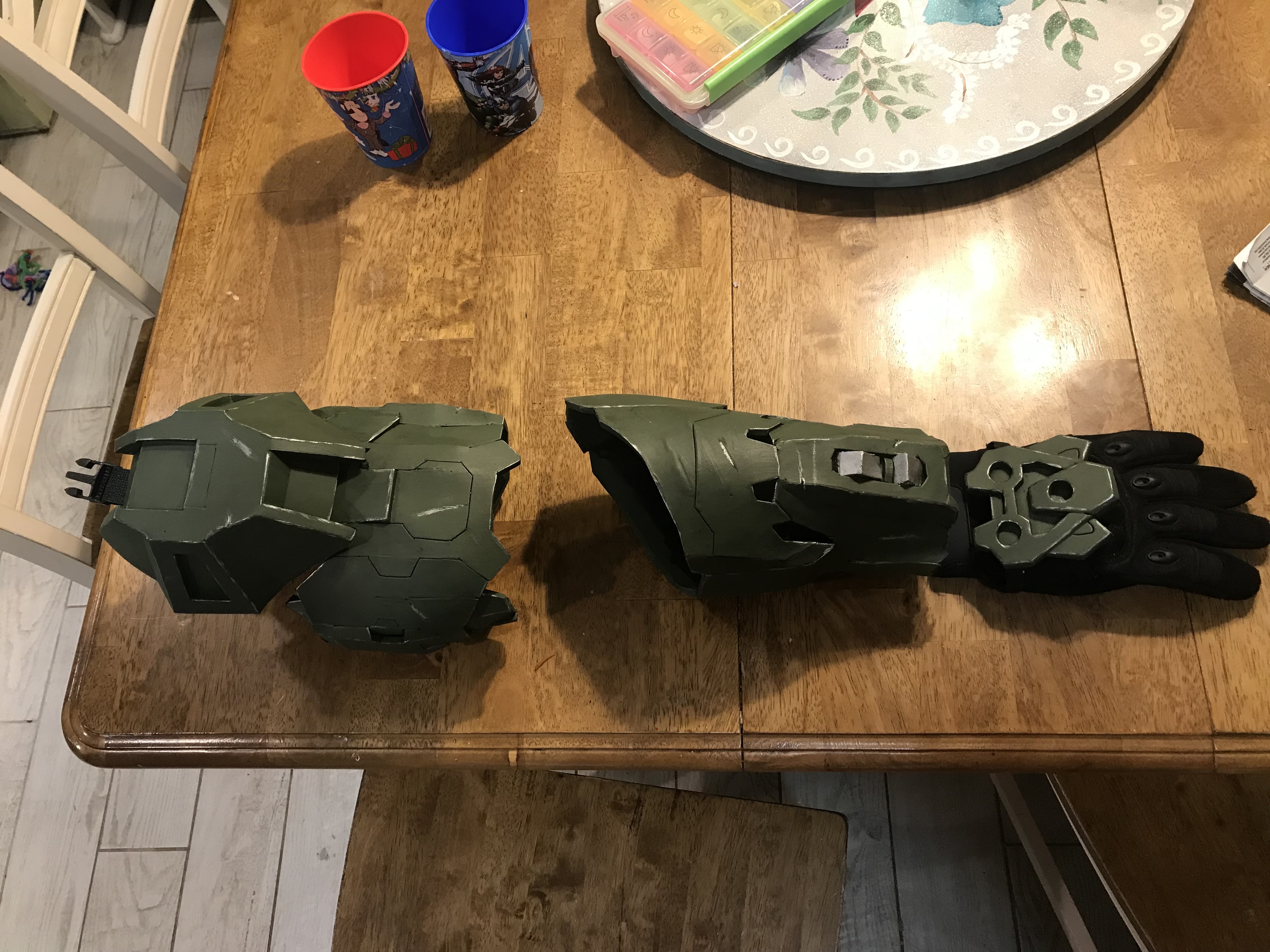 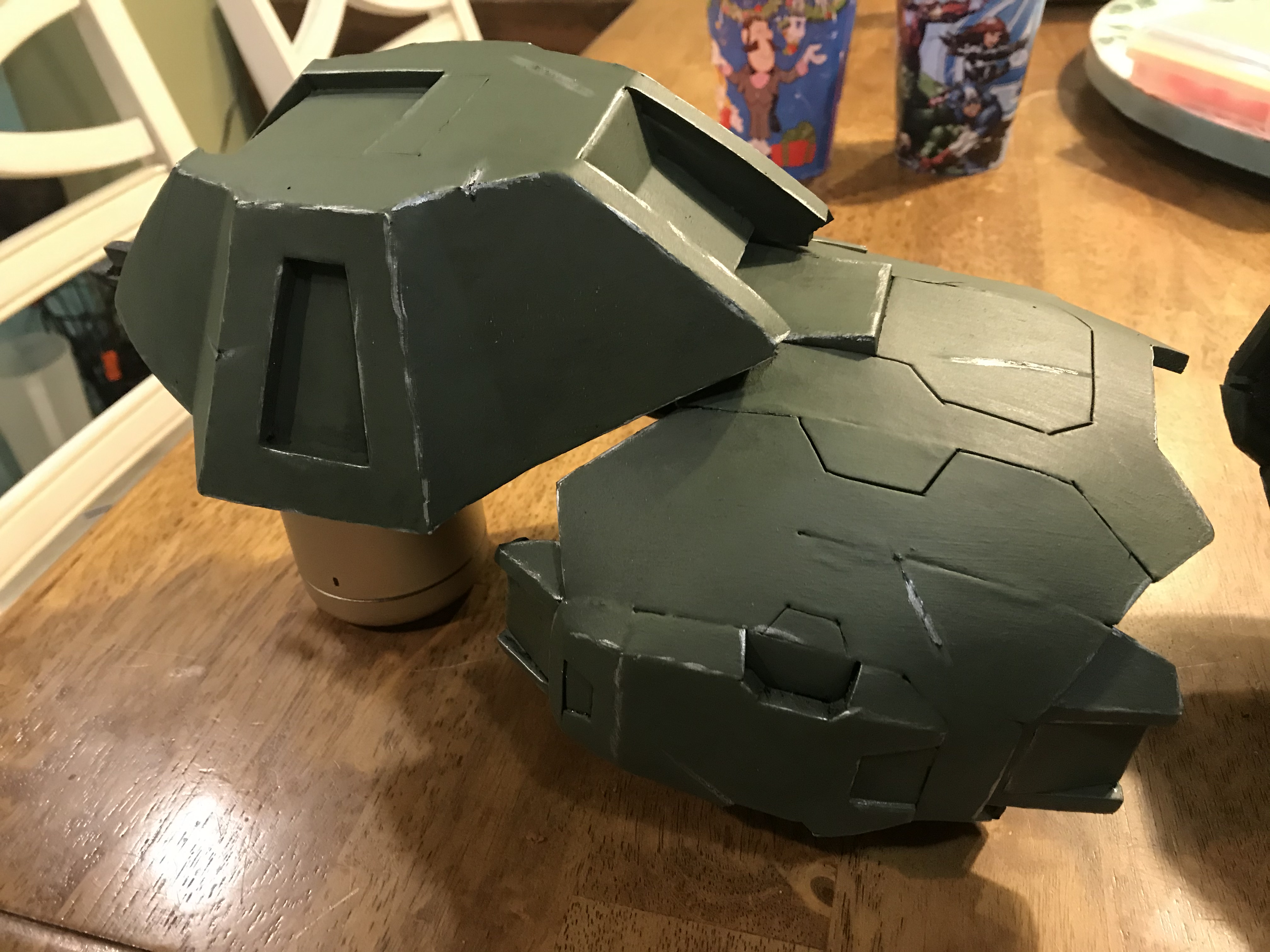 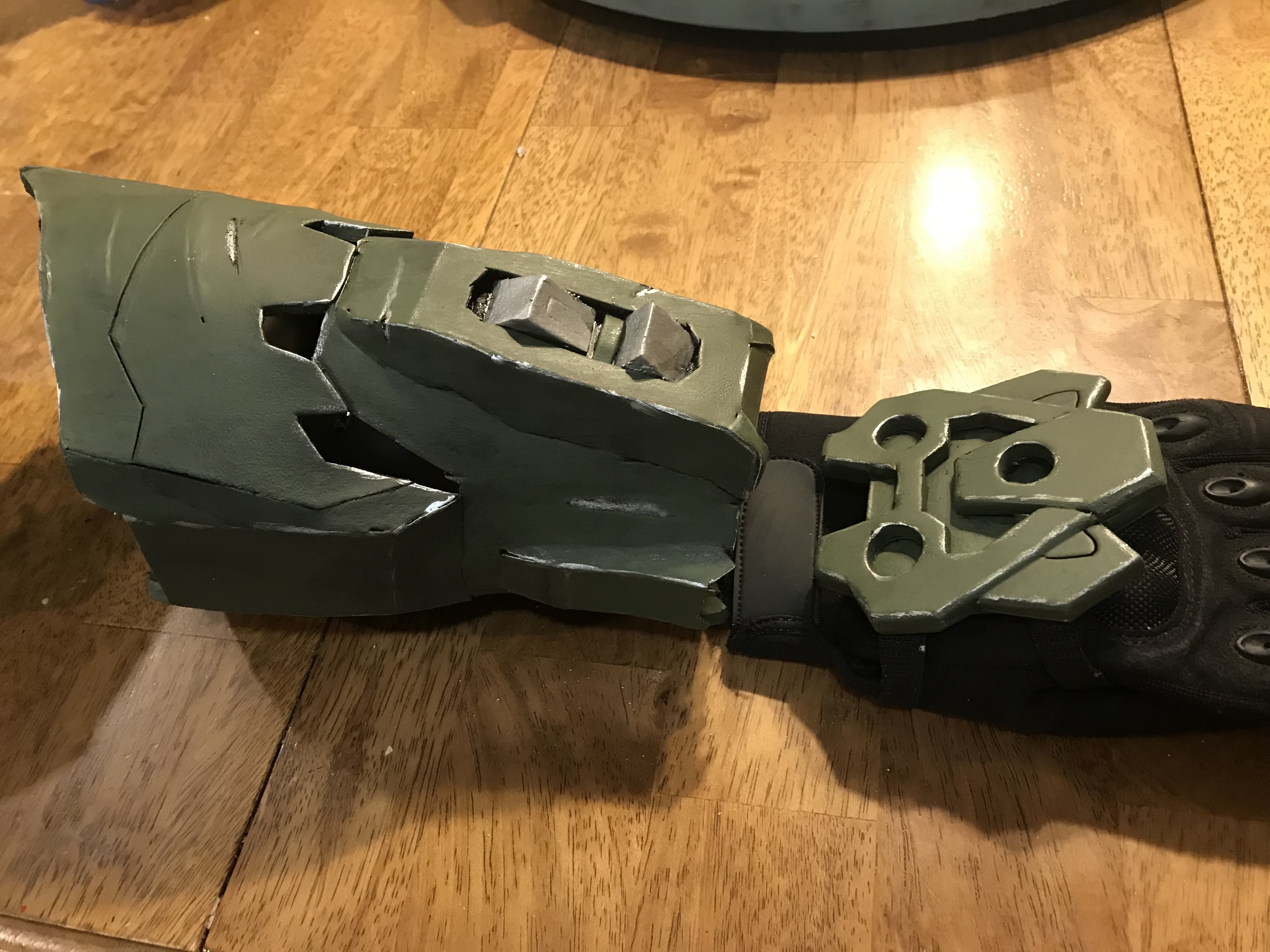 Also, for those of you that are wondering how I wear my armor, here is how.

I have pieces of high strength velcro that go on either side of the shin piece. 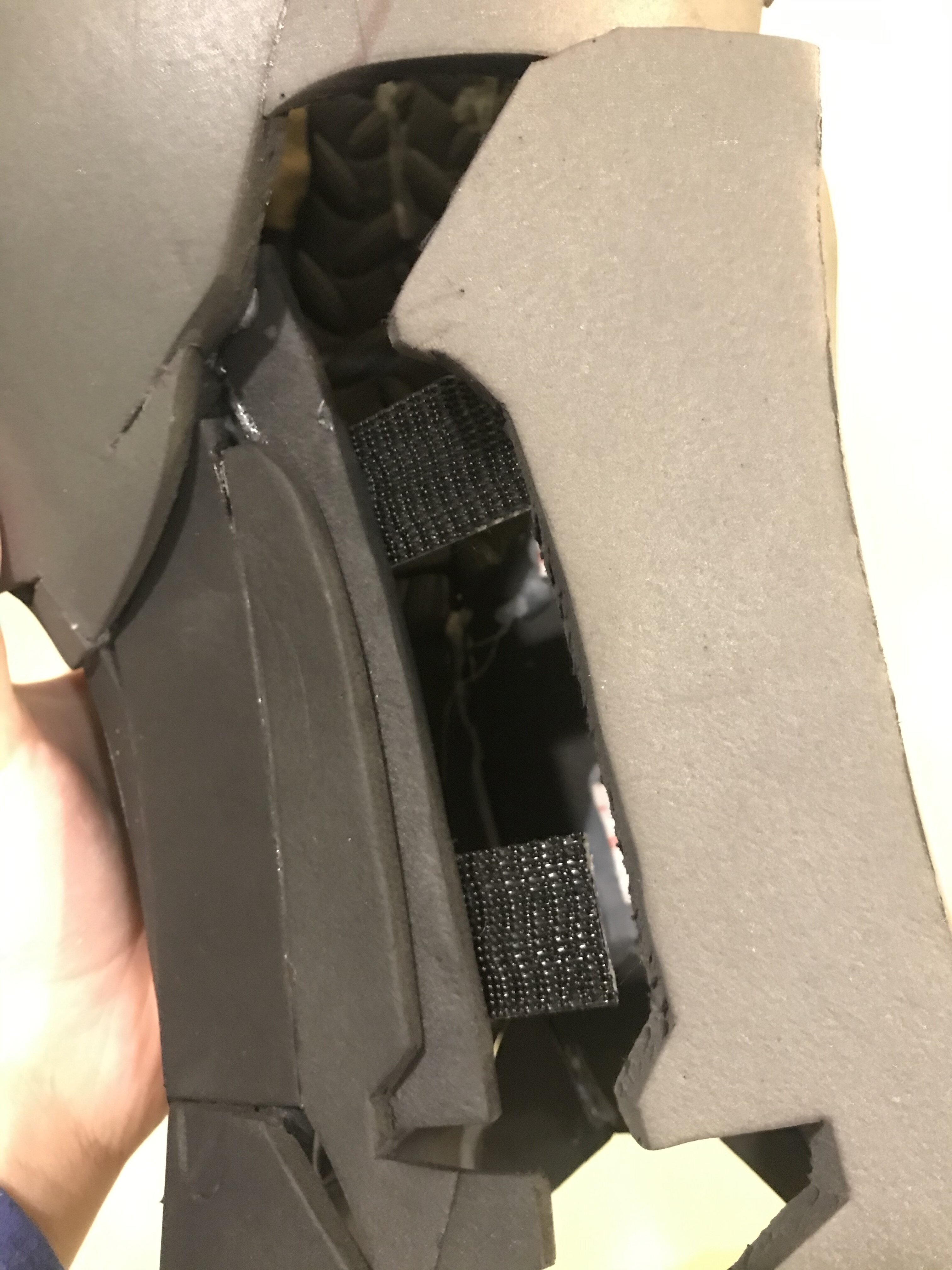 Then for the thigh, I have a loop that is attached to the top. This loop than slides onto a belt I wear underneath the Halo belt. 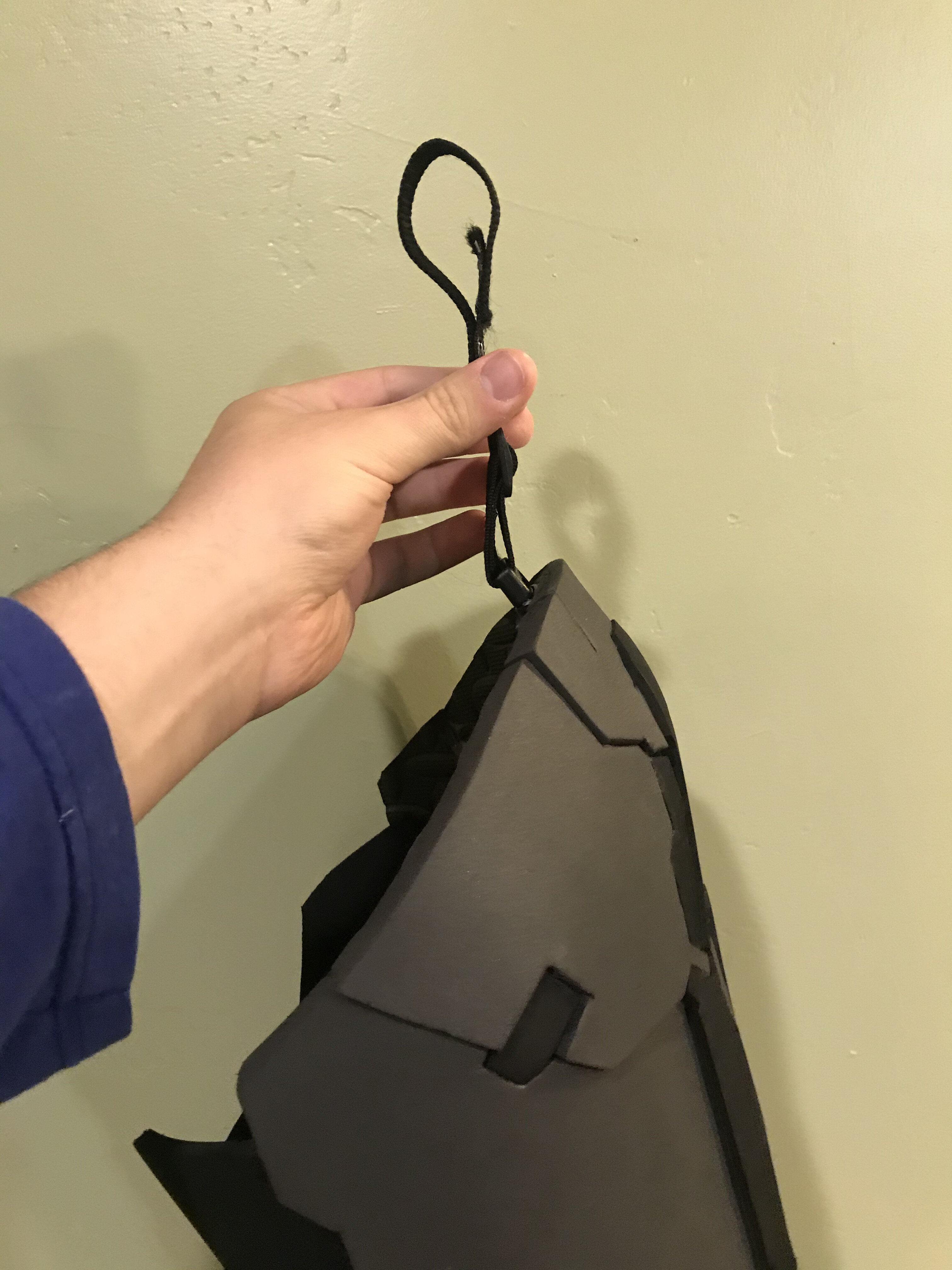 And for the pauldrons/biceps, I have a strap with a clip attached the top of the pauldron which connects to the chest plate. 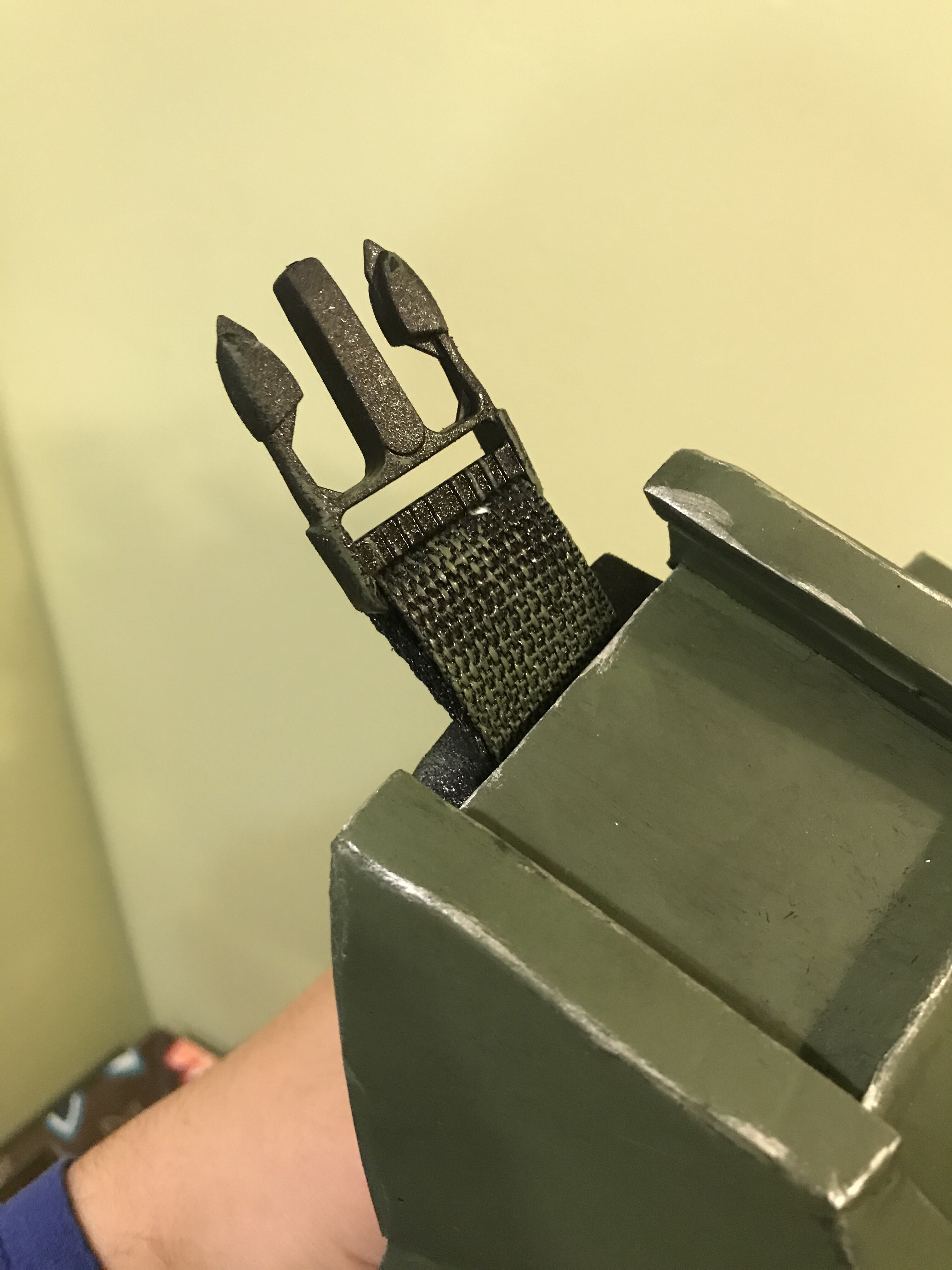 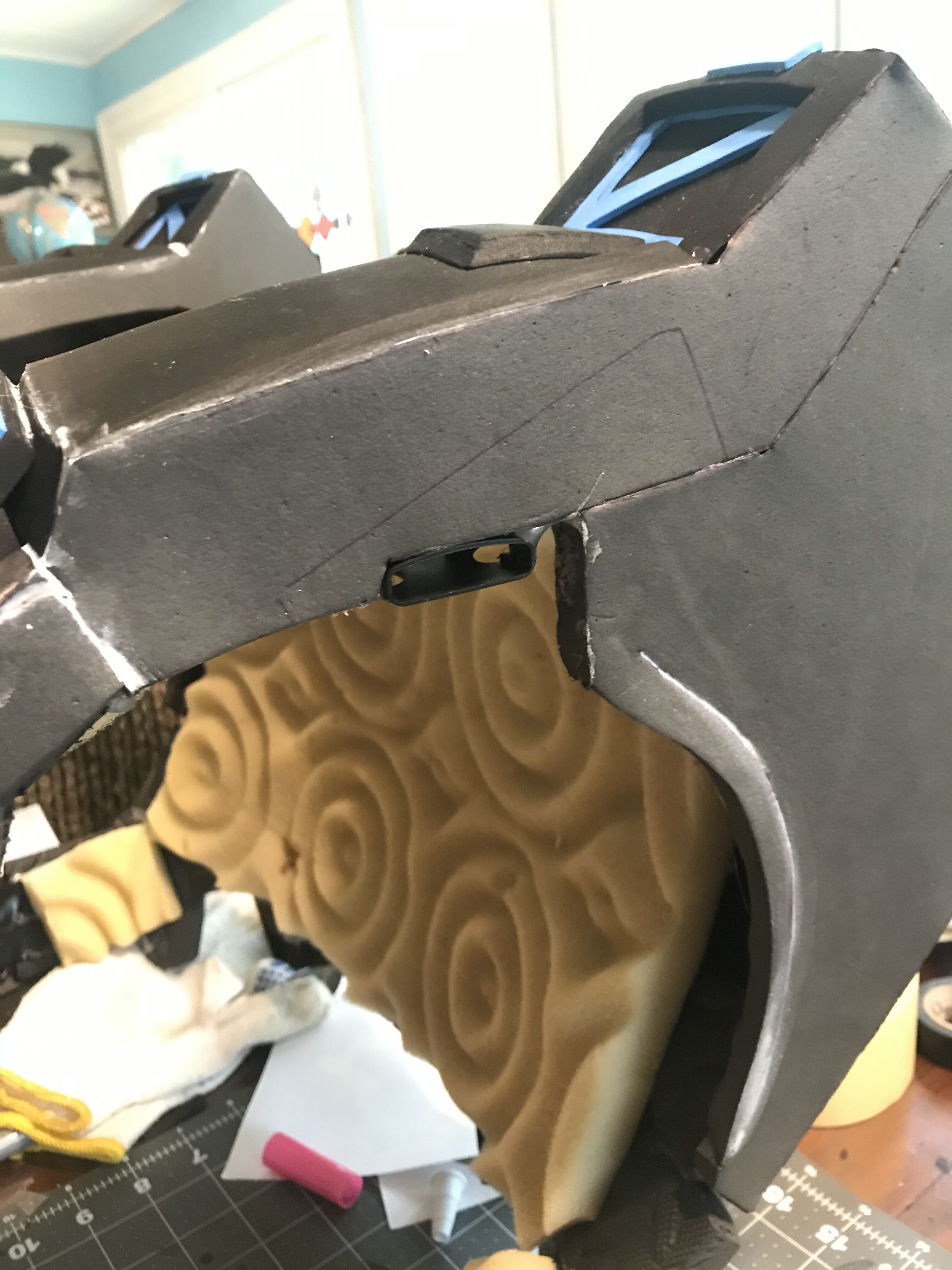 I recently started work on the helmet, and I've gotta tell you. It was a pain! But all very worth it in the end.

First I had to spend a while sealing all the holes and seems in the helmet, as well as adding the details. 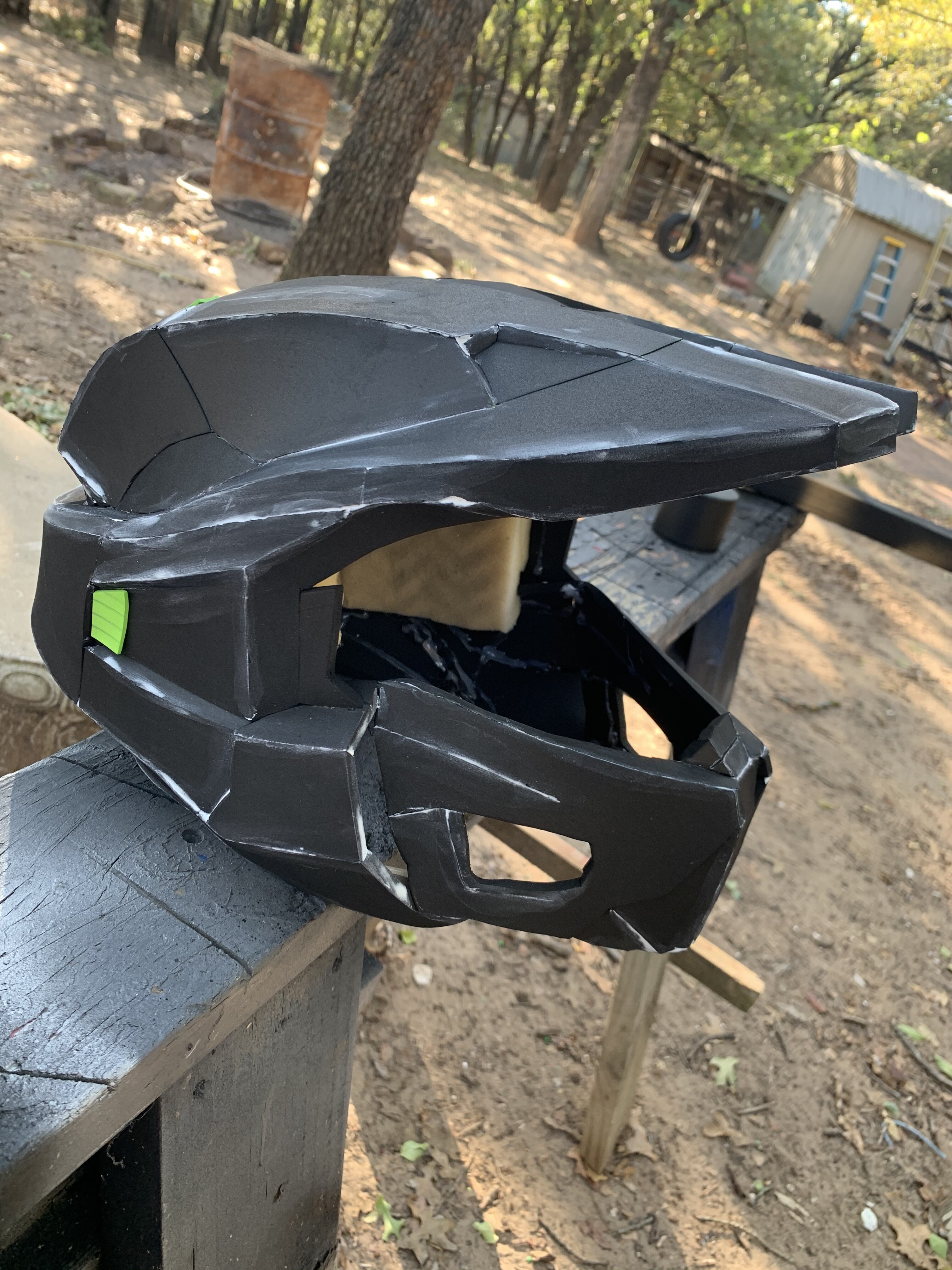 After that I sprayed on 3 coats of plasti-dip and primer. 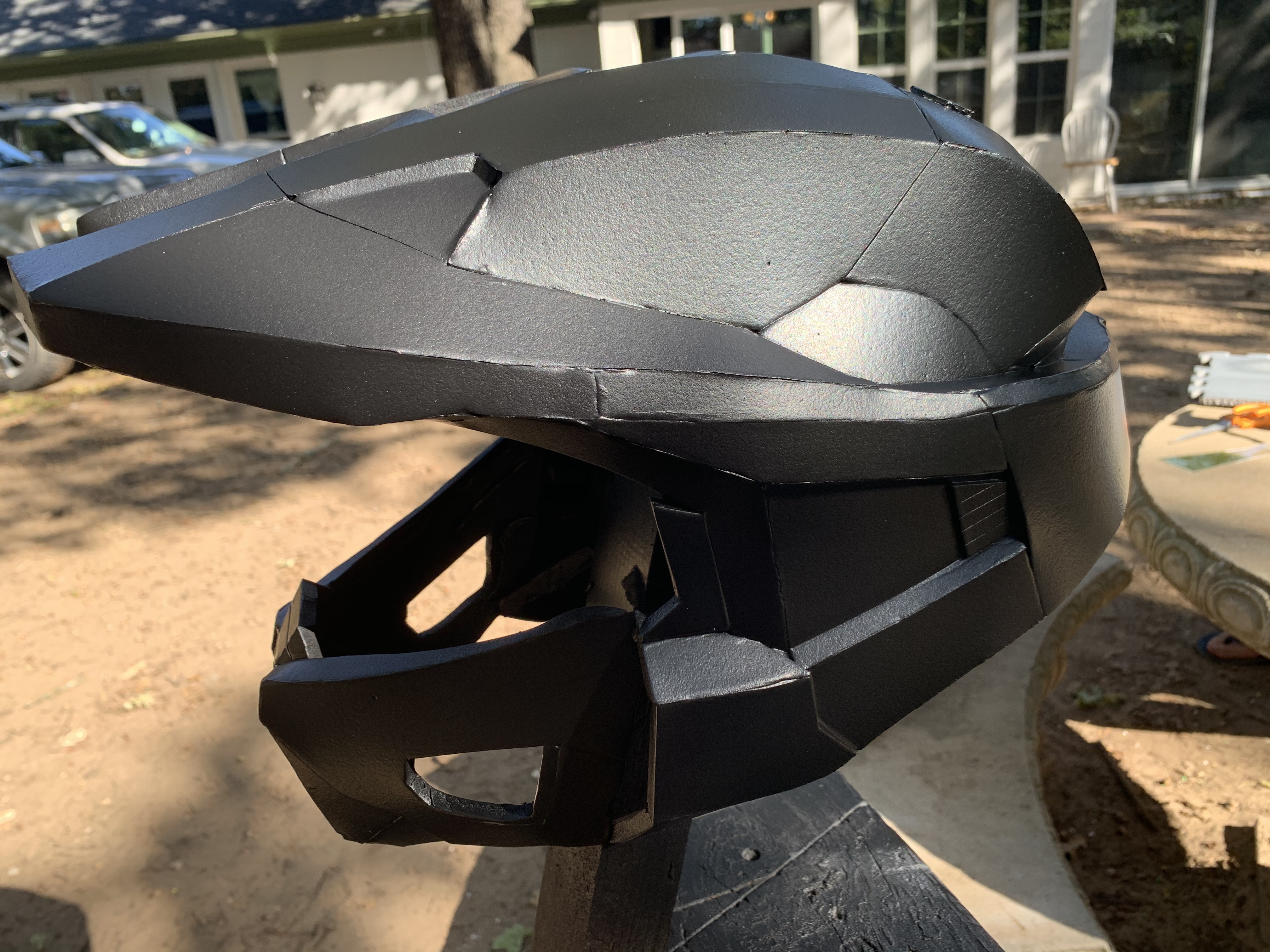 After it was finished priming I painted on two coats of my green paint. 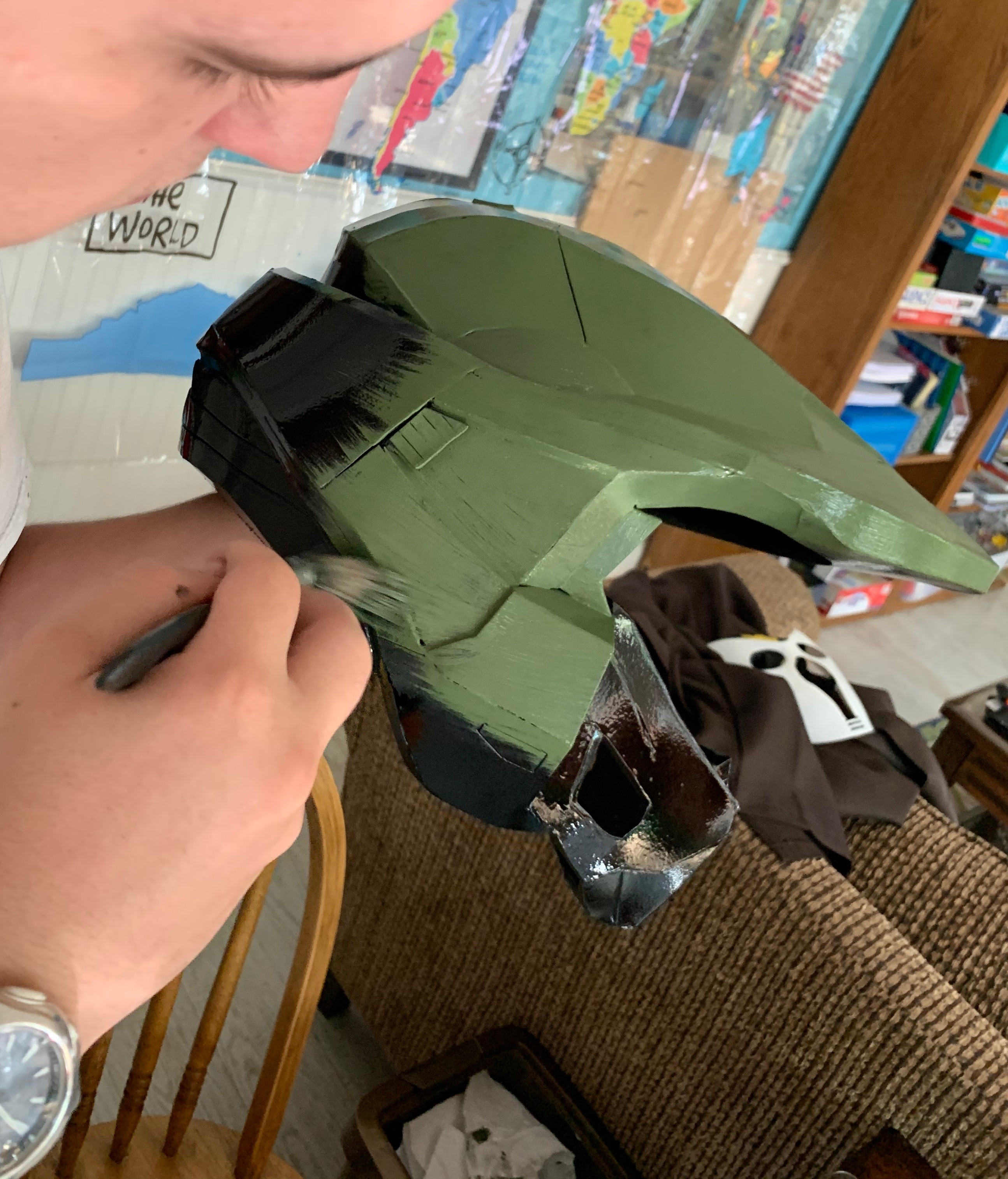 After the helmet was finished, I had to start making the visor. Which wasn't easy. I first cut out the general shape from a sheet of 2mm plexiglass. After that I shaped it with a heat gun, and got the curve. 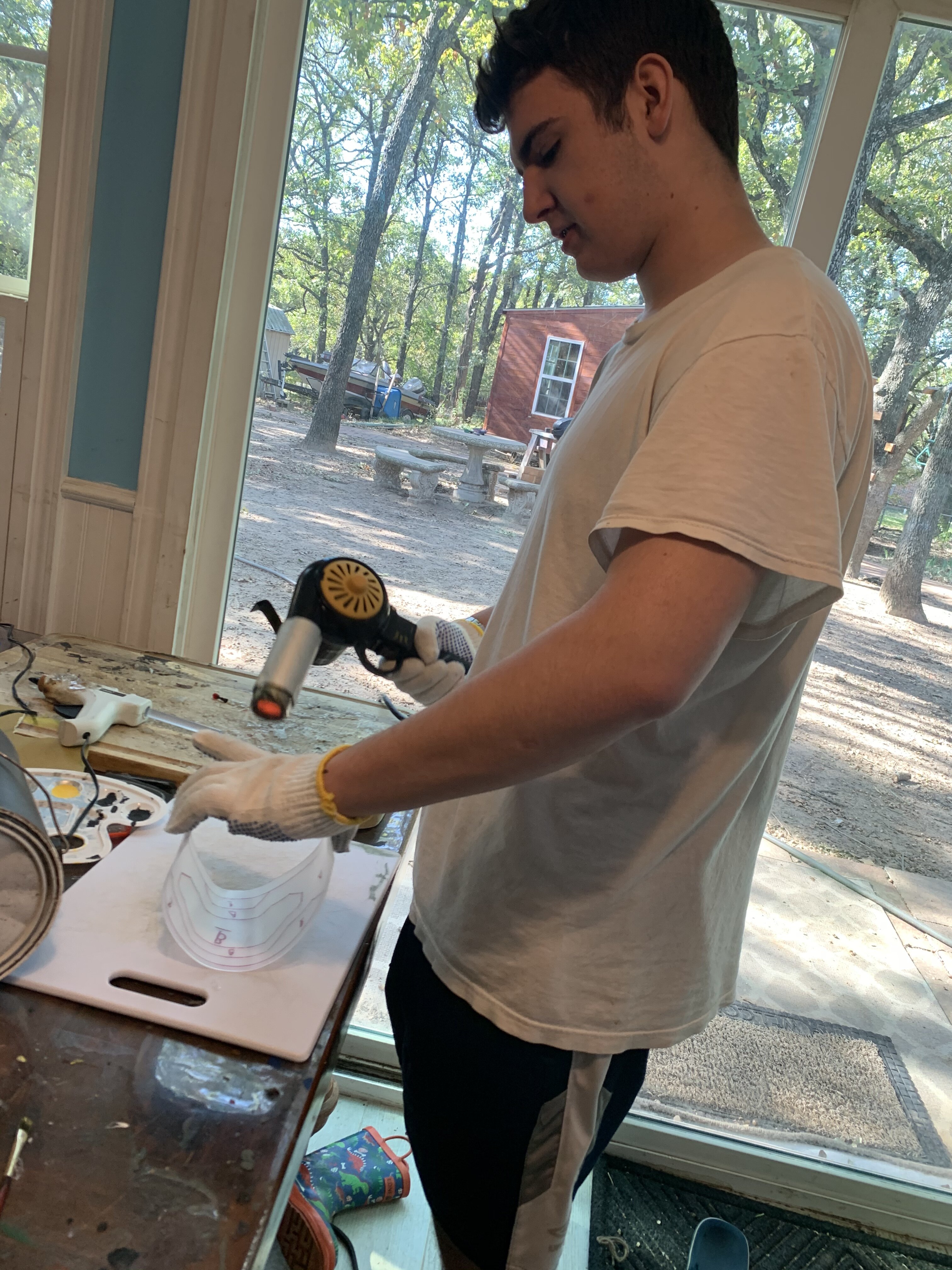 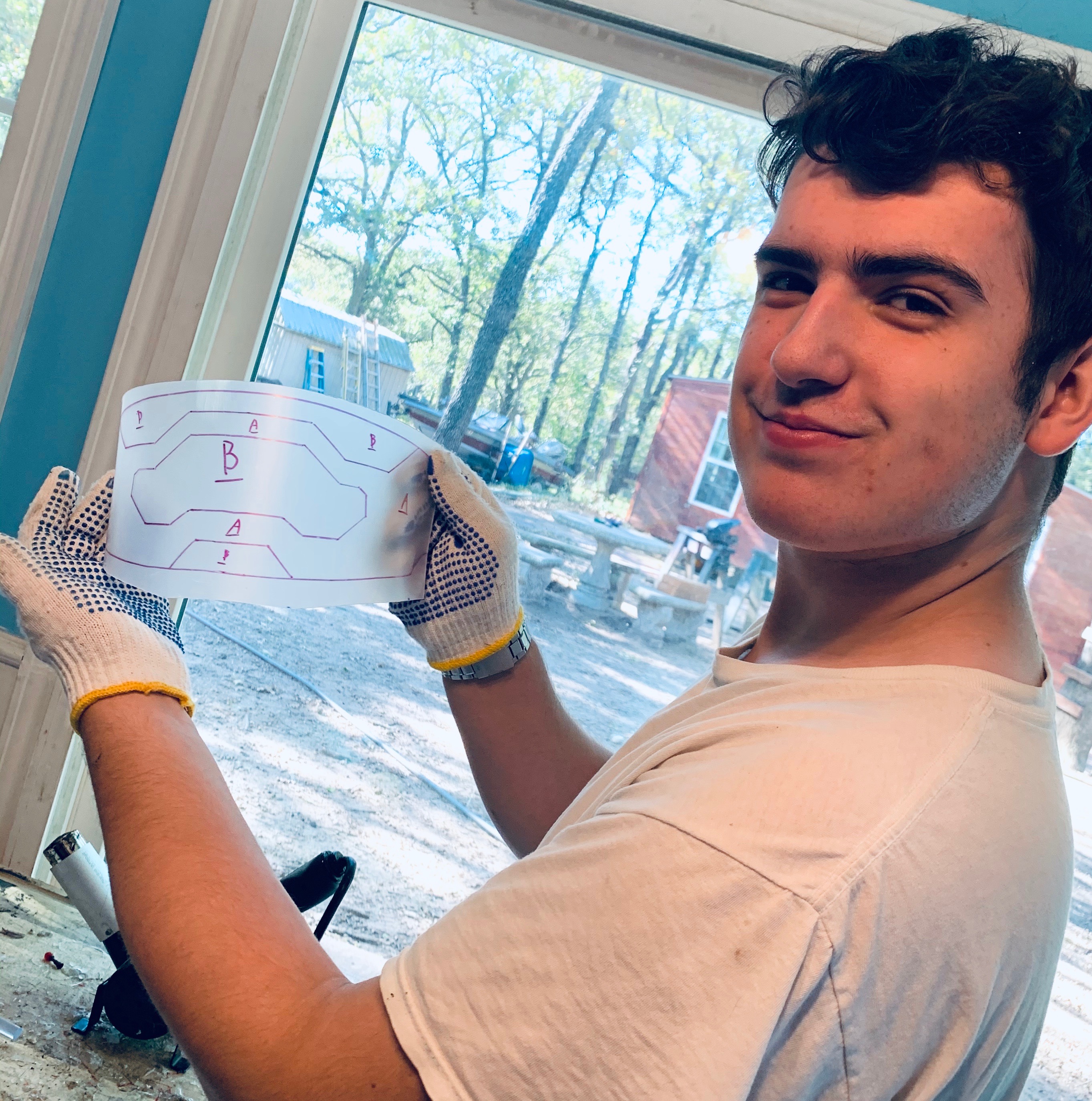 After that part was done, it was on to window tinting. I was able to make a good base layer for the visor with the plexiglass glass. It took a couple tries, but I got the hang of it. 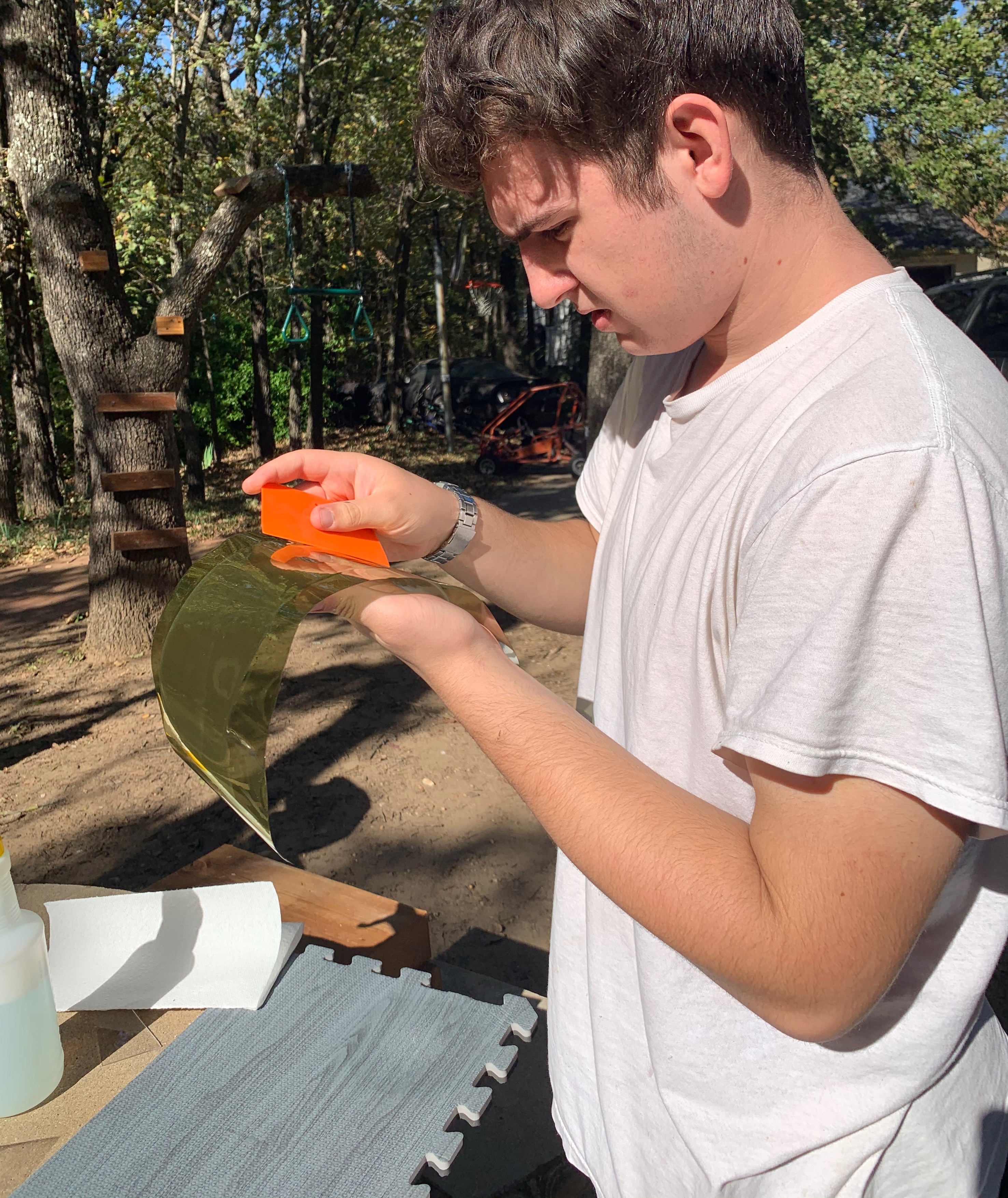 Next I had to make the detail layer, and this part scared me. I only had four sheets of plexiglass and already used one for the base layer. This detail visor you see took me three tries. 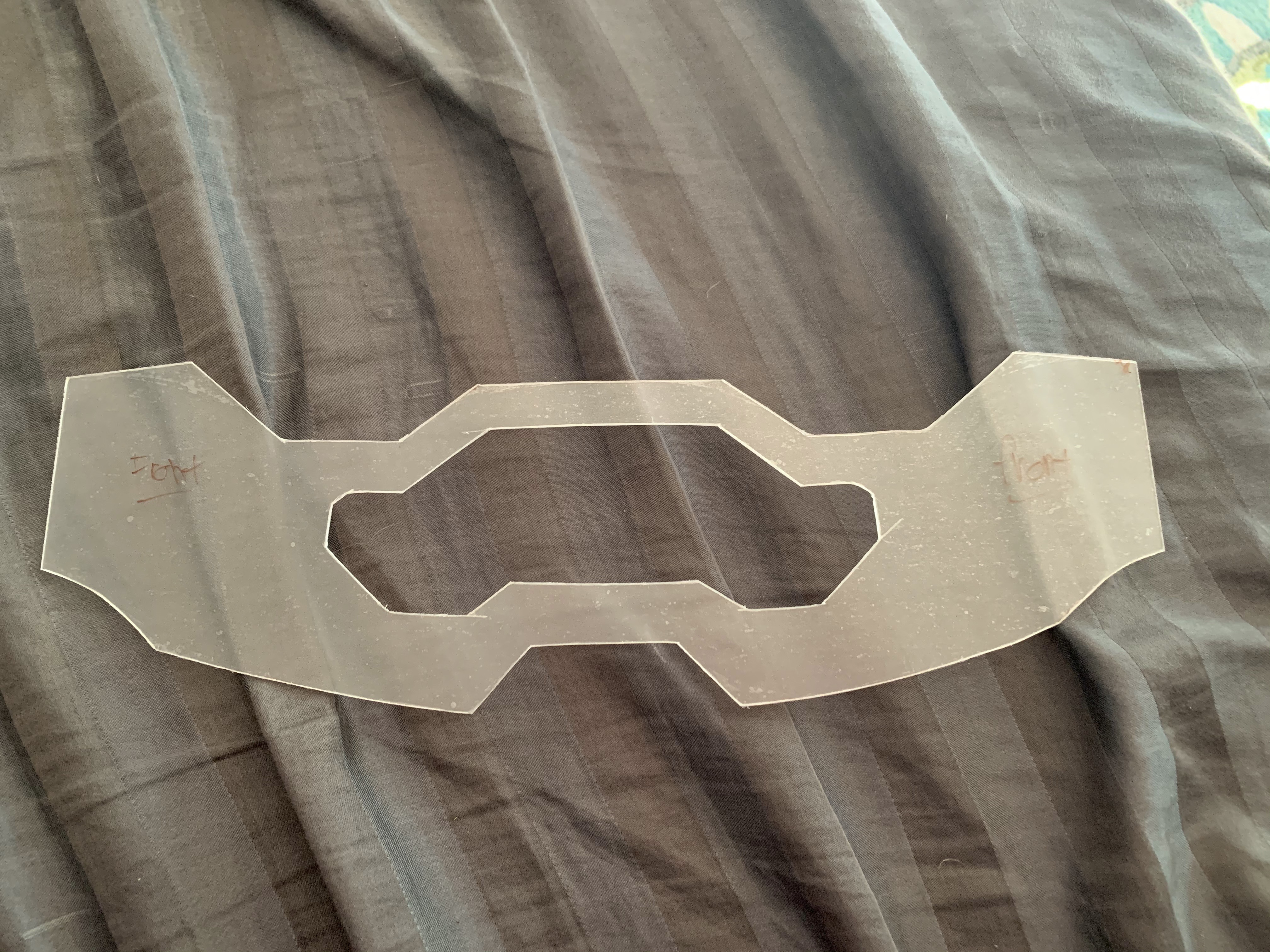 Also took a couple tries to tint the detail, but it came out nice. 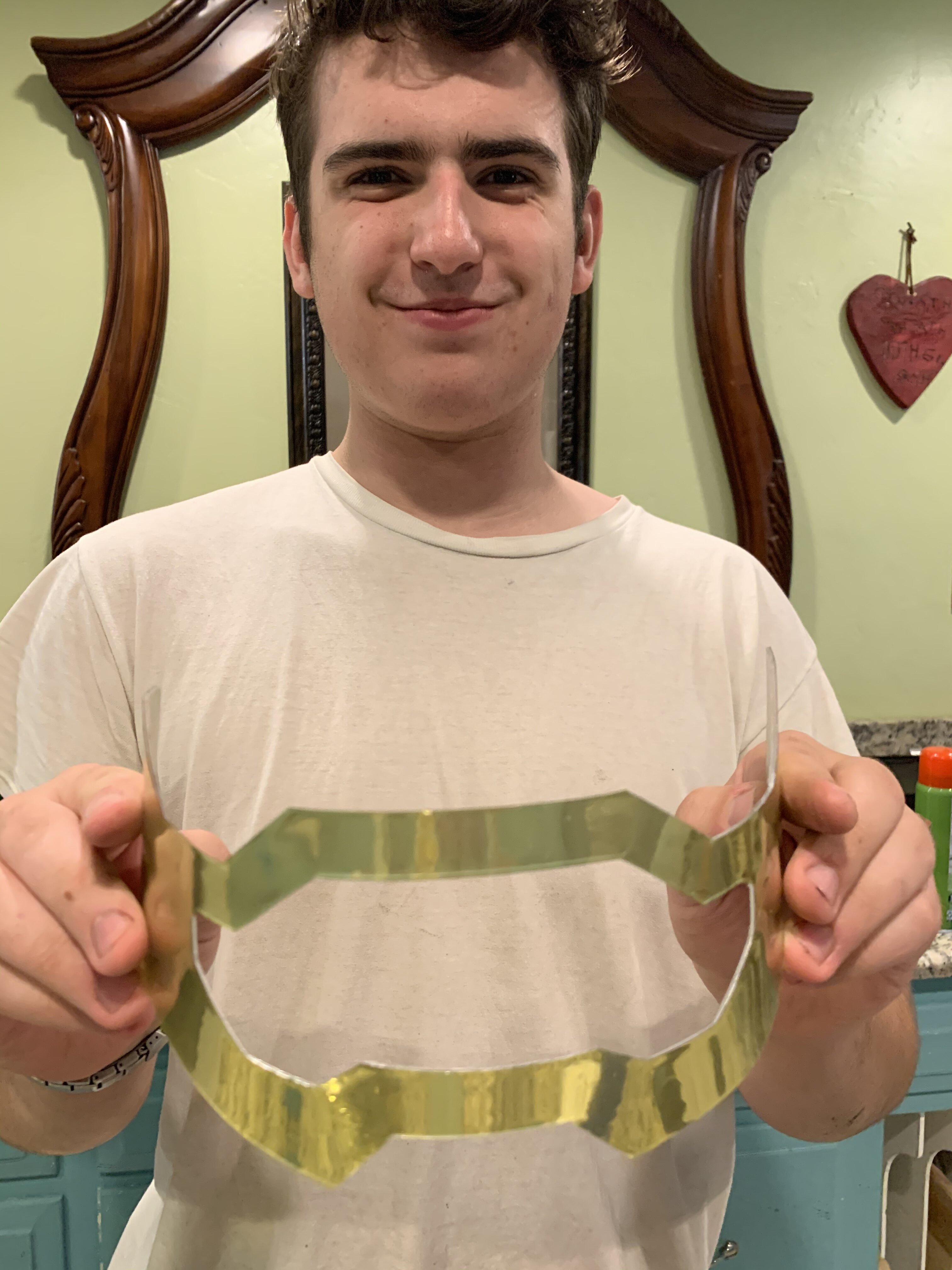 I finally had the bulk of the helmet done. And after some weathering and more tweaks I was able to achieve my greatest work of all. 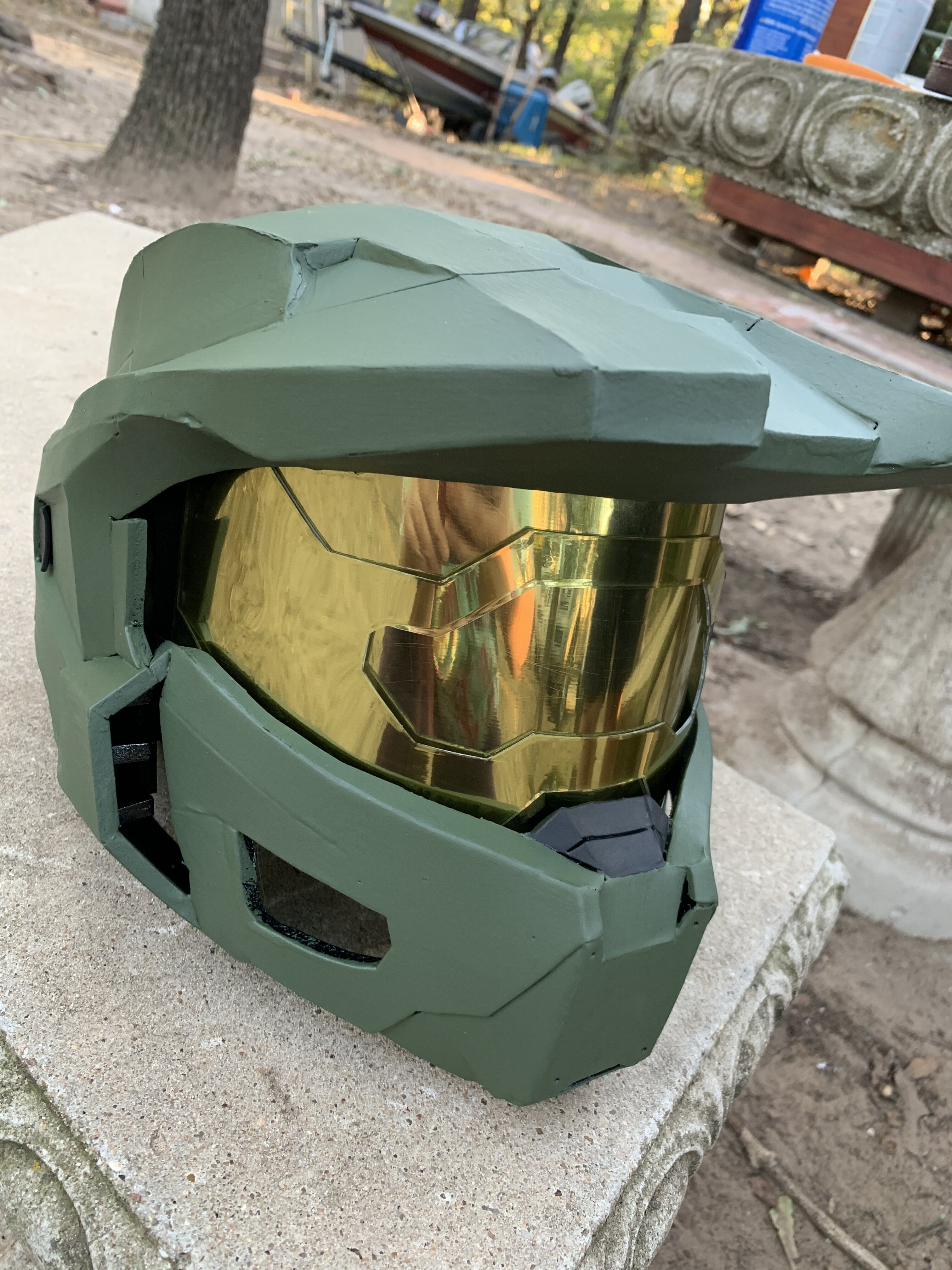 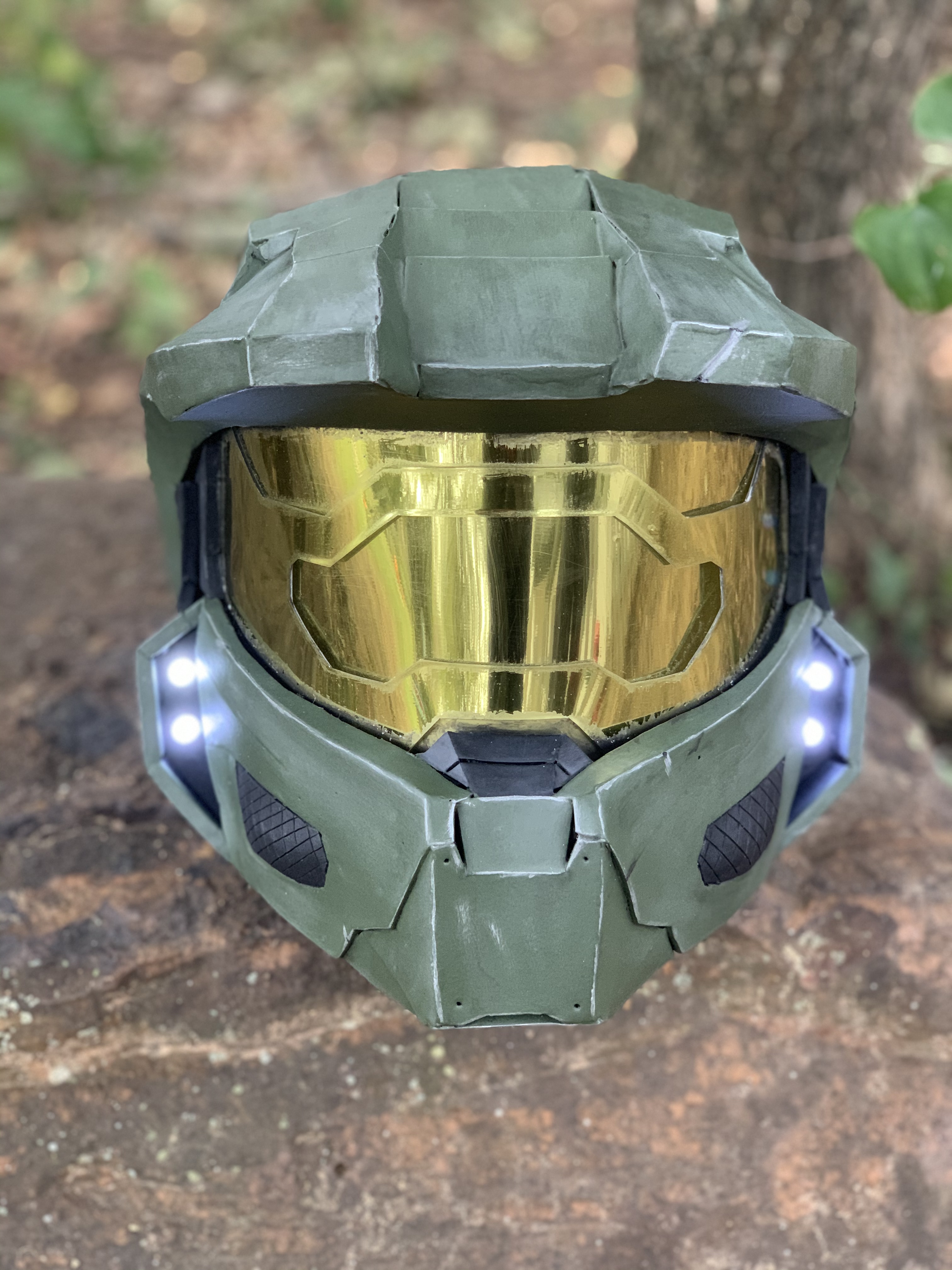 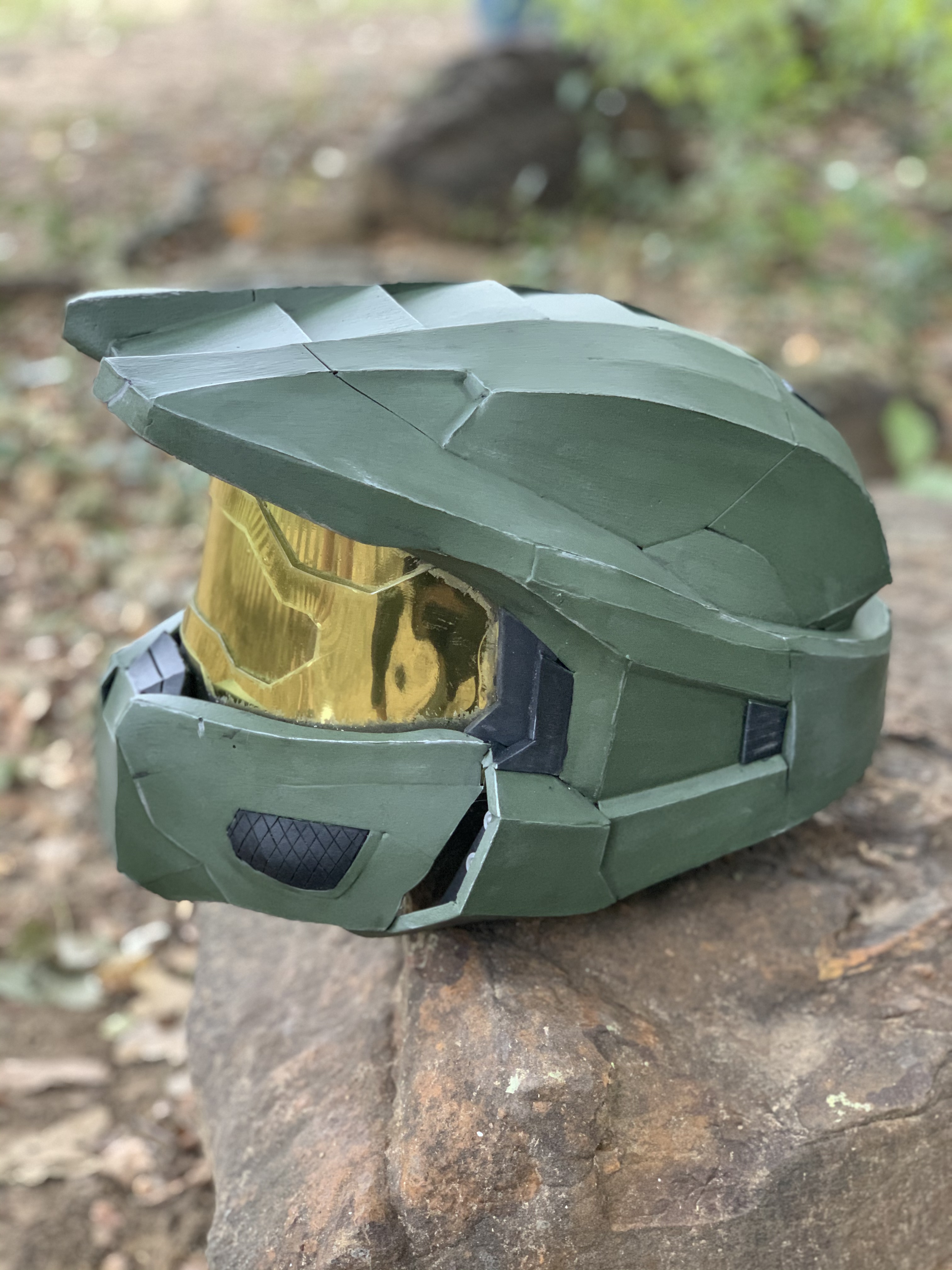 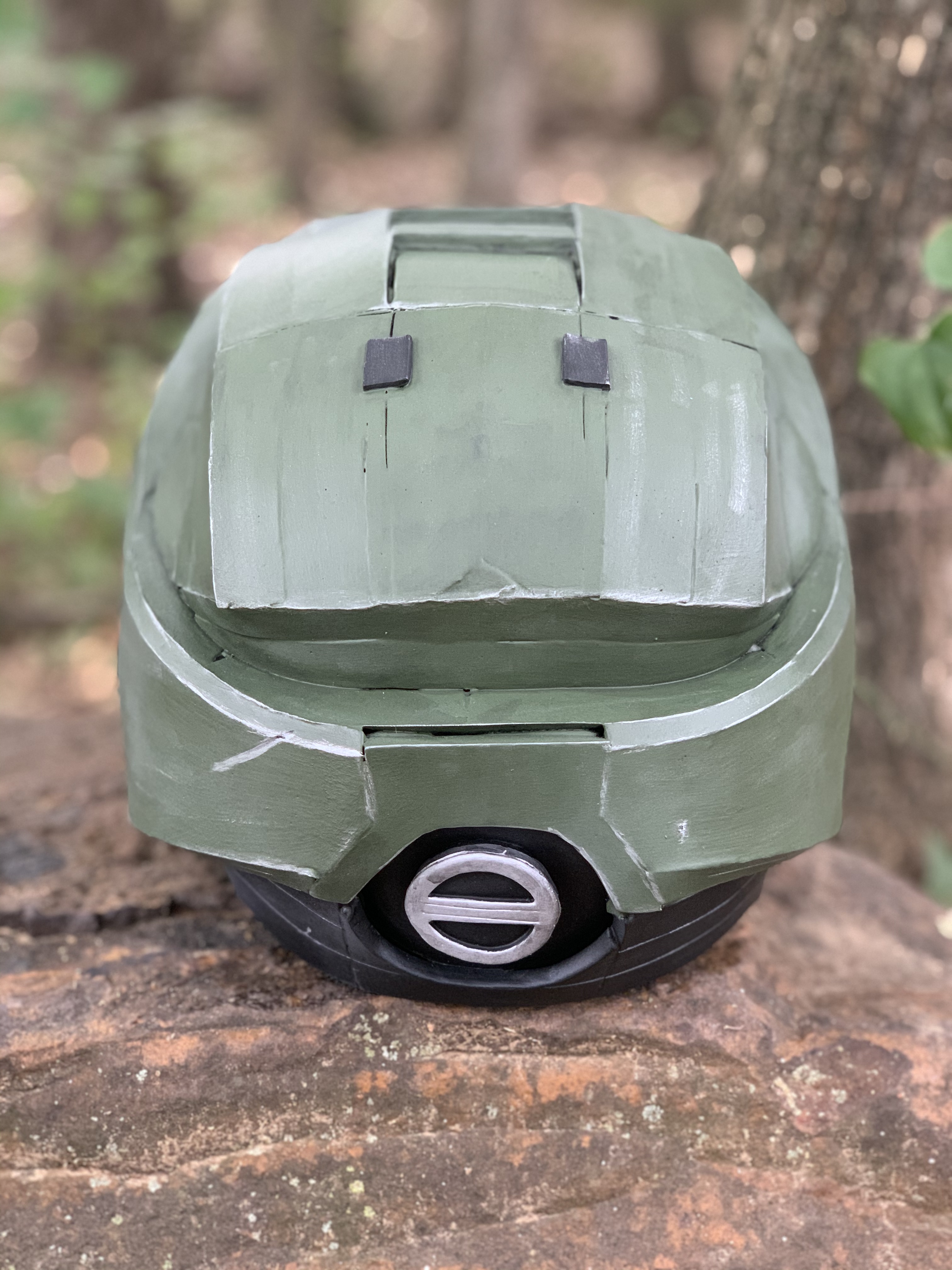 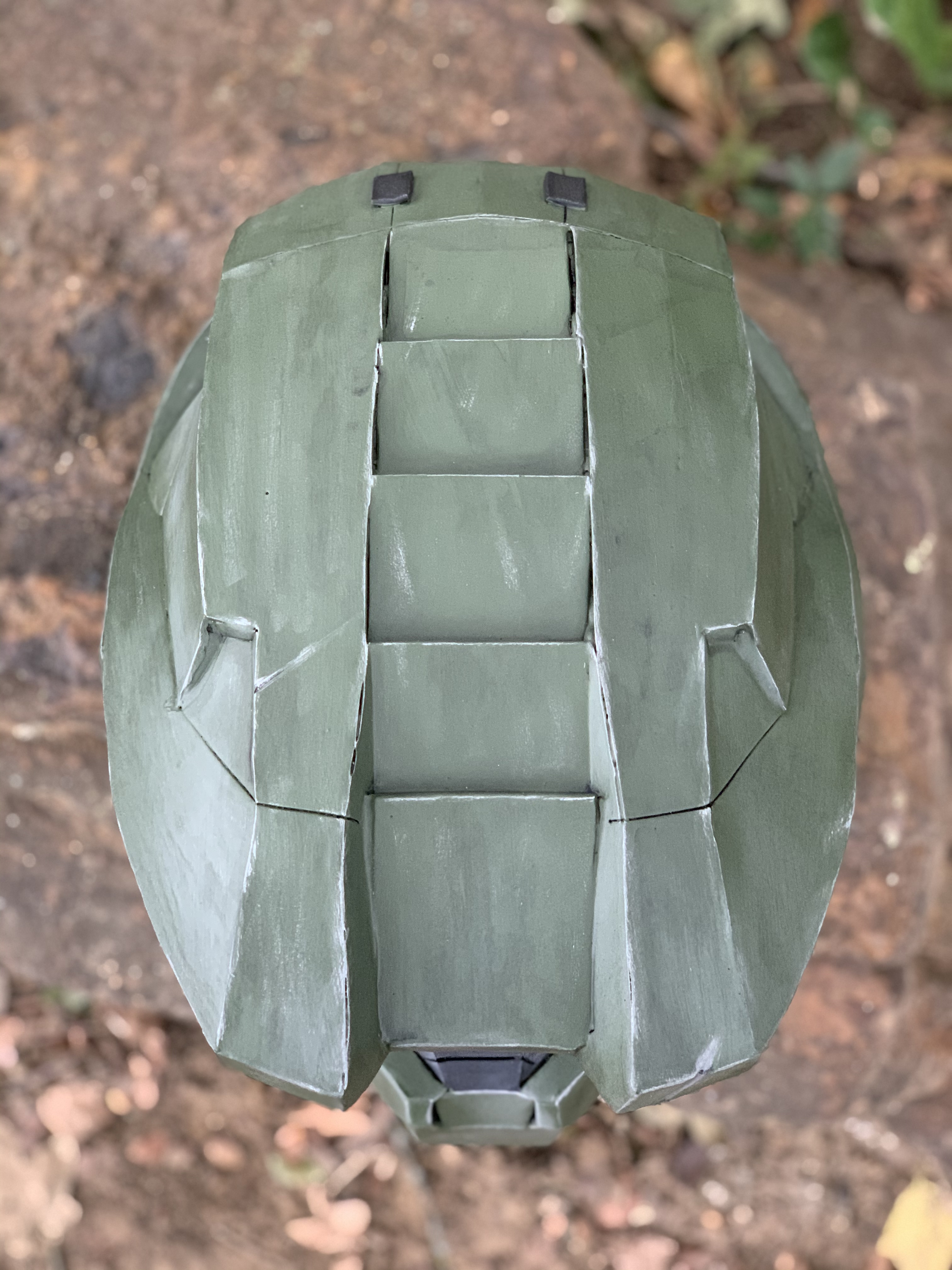 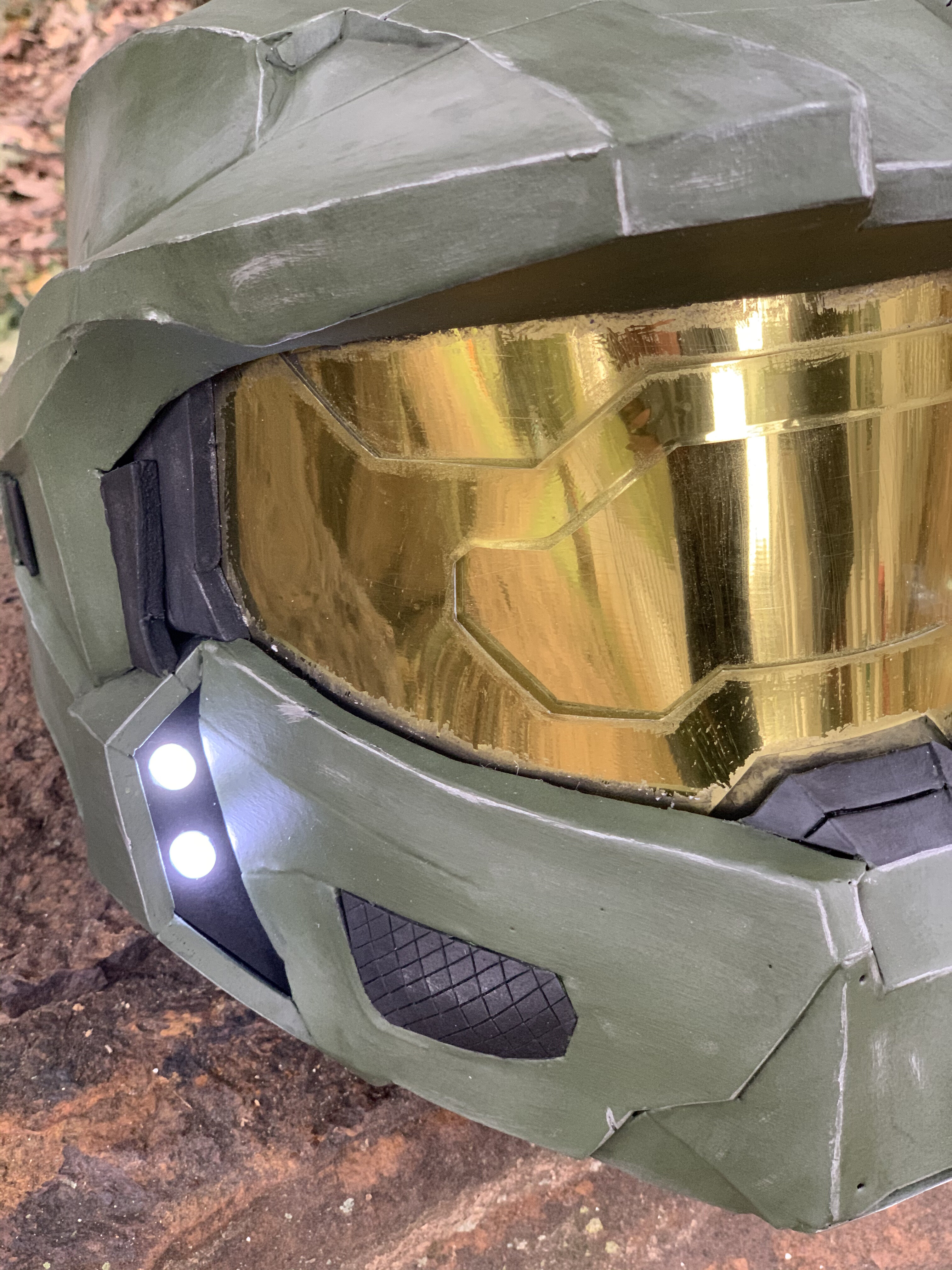 The lights were made with cheap finger lights that fit into slots so I can change them out in the future. Also something funny happened at the end of making this helmet. I was spraying some matte clear coat onto the helmet to protect the paint, but I forgot to cover the visor. I was so scared. I thought I had ruined my helmet. And I did... for only five minutes. I learned that I could scratch it off the visor, so I used it to my advantage. I scratched most of it off leaving some of it behind to make a grime on the visor. This made it look even better. I am so happy with this helmet. All that's left now is to paint the rest of the suit, and make some tweaks to make it all more comfortable.
Last edited: Nov 2, 2021
T

Can we see the scratched looking new visor? And also please I’m begging you dir the templates

ThePumpkinKing said:
Can we see the scratched looking new visor? And also please I’m begging you dir the templates
Click to expand...

I'm not sure I understand. I can get you the templates. The current pictures have the weathered/scratched up visor.
Last edited: Nov 11, 2021

Today at 1:38 PM
UltimateSpartan
U

Today at 1:38 PM
UltimateSpartan
U