Right now im working on a MK6 Master Chief build, all 3d printed on my ender 3 and cr10 printers. I have all of the pieces printed out and right now im struggling to figure out how to attack the back torso to the front chestplace piece. Im currently trying to use bicycle clips to connect the top on either side and use velcro on the bottom middle pieces because i am unable to fit clips due to the walls inside. However im not making much progress and everytime i try to glue in the clips on the top they are either uneven or just extremely difficult to clip( i assume because of the clips not reaching each other fully because i want the seam to look somewhat decent. I've thought about gluing the whole thing together and just trying to put it over my head but the neck is to small to fit in. Anyone found a better way to do this? thanks yall 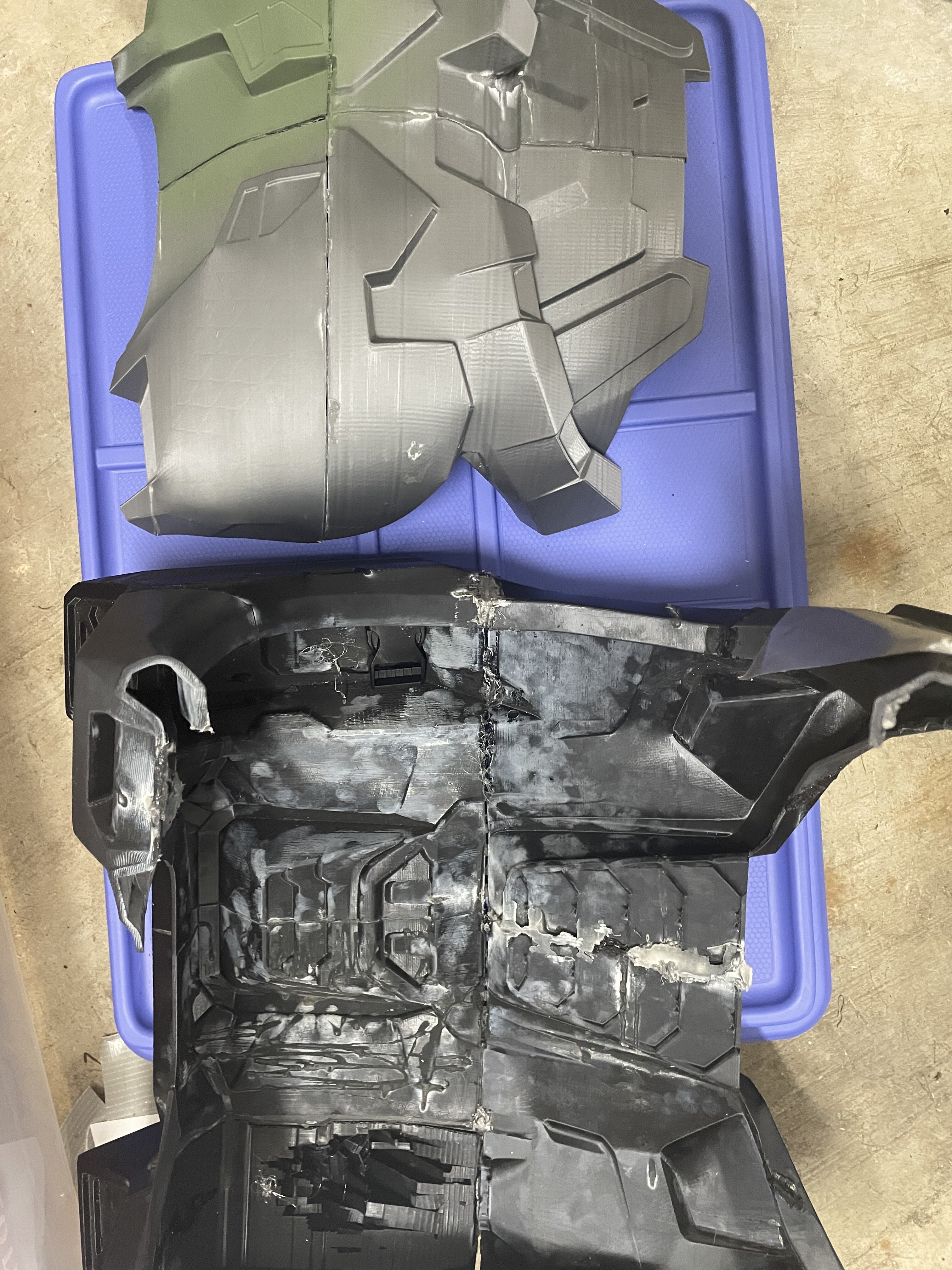 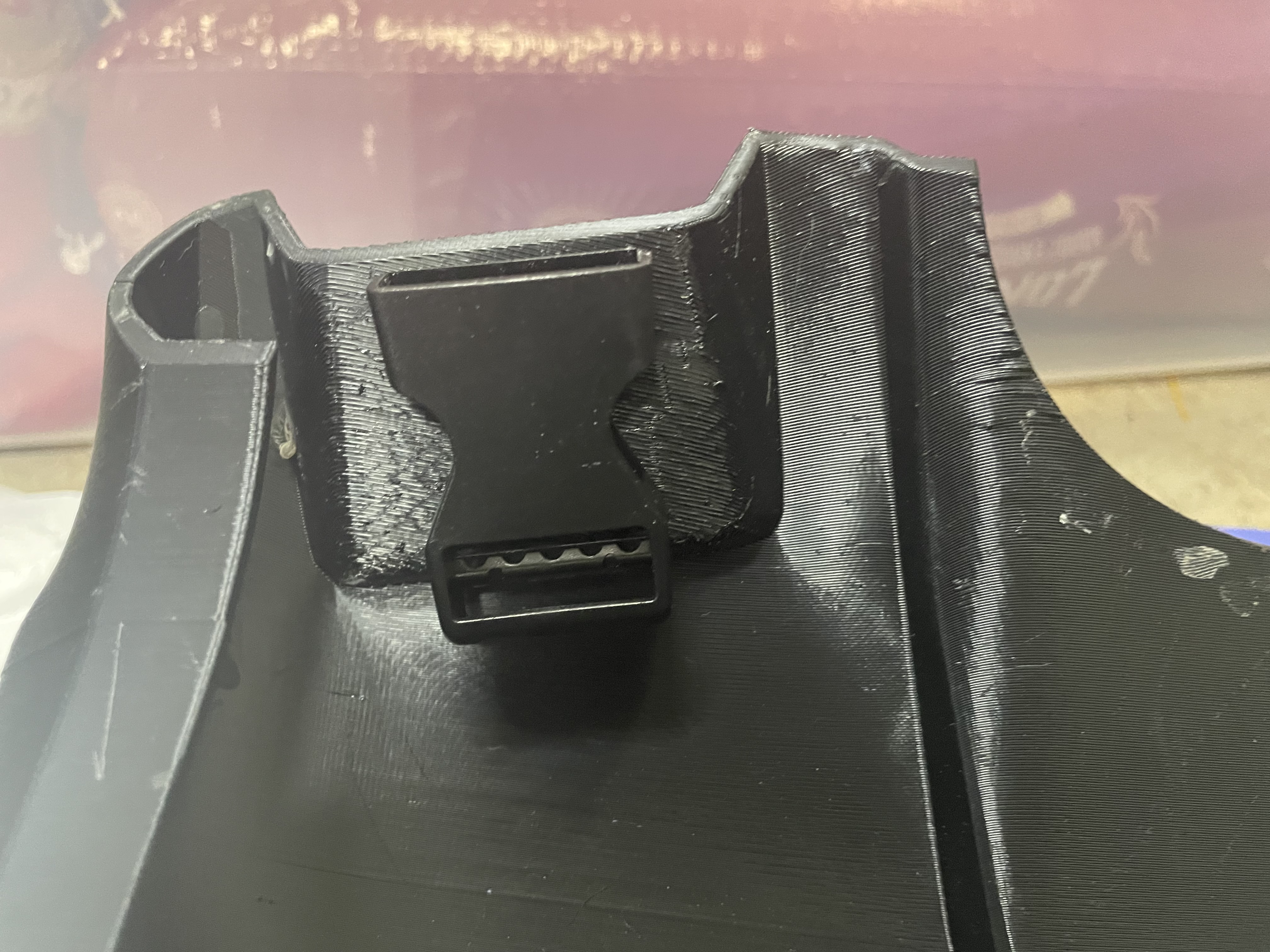 European Regiment
The way I did it (which might not be too posible here, and didn't fully hide the seam either, but could probably be adapted) was to weld a pipe to the back and a pin to the front part in each of the 4 locations where it connects. I also have a hole drilled through the pin and pipe in order to lock the chest together with screws, but you probably won't need that.

You could probably do a simlar setup to align the two parts, and then hold them together with clips and some elastic (the elastic will make it easier to properly adjust and should also pull the two pieces as close together as possible without making it really difficult to put the clips together). I wouldn't use elastic without having any other alignment system as I'm not sure if it would align the parts properly.

Another option people use are magnets simply glued to the front and back pieces. You should be able to do this by attaching the magnets with epoxy putty while the chest is put together. The magnets should align the parts properly, assuming they were aligned when you glued the magnets in (and the magnets were stuck together, maybe with some not too thick seperator between them), and if you used strong enough magnets and the gap between them is small enough, they should also hold the two parts together really well.

You can secure parachute buckles with nylon straps to both sides. Secure the staps with pop rivets. Also i would seriously reinforce your inner print seams with some fiberglass matting. Hot glue is a potential fail point on a 3d print. Neodymium magnets are your friends as well. especially large block ones. You can always bondo those in place.

On my suit I used magnets on the top side and clips on the bottom to make it easier to get in the armor alone. It takes a bit of time to get it all lines up right but once its in it works quite well.

I’d recommend using these parachute clips over the others…

Just because the button release is on the top and easier to get to on your own when removing the armor as opposed to the side release ones. They are super super handy on chest plates. Especially when want to hide them on the inside of the armor

SSGLordBert said:
I’d recommend using these parachute clips over the others…

Just because the button release is on the top and easier to get to on your own when removing the armor as opposed to the side release ones. They are super super handy on chest plates. Especially when want to hide them on the inside of the armor
Click to expand...

Never thought of these. Thx for the recommendation!

Magnets were my personal go to, you can epoxy them on the inside and then reinforce with epoxysculpt if needed. Creates an easy way to get in and out of suit!

New helmet did somebody say attachments

New helmet did somebody say attachments