Canadian Regiment
ATTENTION GTA CANADIANS!!!
Aaron Esser is a Canadian youtuber based out of Grand Bend Ontario and wants YOU (that's right, YOU) to be in an upcoming Halo Nerf Video!!!

Ok I'm sure you have questions. So here's my FAQ. (I know you have not asked any questions at this point so there are no "frequent questions", so in this case FAQ stands for "Fully anticipated questions."

Q: Wait what? Who's Aaron Esser?? How do you know him??
Aaron Esser is youtuber (7.78 million subs) who makes nerf videos! In 2020 he reached out to me to make a few halo nerf videos. I was able to go up to Grand Bend for a few days and work with him and his crew (which mostly consists of younger folks in their early 20's) and make some sick nerf videos! Here's some links to what we made:
Making nerf videos is as fun as it sounds! I had so much fun making these videos with the guys. The next year, Aaron reached out to me again to do another video. We filmed that one in August, and it will be released sometime in March/April. I also made a BTS video to go along with it which will be released around the same time. Well, I sent him the BTS vid the other day to review, and also sent a link to the Torrence Barrens photoshoot we did in case he needed a good photo of my suit. Well, he was really eager to know if those handsome spartans and ODST's were local! He thinks it would be a splendid idea to get more than just Master Chief in the next video!

Q: Ok, what's the plan?
Well, the only thing we know for sure is that we want to make a halo nerf video this year, and it will be filmed at his place in Grand Bend. Whatever we film will be similar to the videos above. Typically, I go up the night before the shoot and spend the night as his place. The guys that help with the videos usually do this as well because it saves them the drive. With two days of filming Aaron can make 1-2 videos for his YT channel. Filming starts late morning (around 10:00am) and we wrap up when we feel we've done a sufficient amount of work (around 7:00pm). We would be staying at the house you see in the videos above. There are a few rooms upstairs, a few on the main floor, and a few in the basement. The house sleeps some umpteen people. Most of the rooms have bunk beds.

If you are at all concerned about staying the night at a stranger's house, I personally vouch for his character. Aaron is 28 years old, engaged, and very respectable. I've spent many nights at his house. He is very welcoming and makes you feel right at home. If you have the opportunity to film a video with us this year I'm sure you will have great memories from your time there. If I, the small town Christian kid, can feel comfortable at his place I'm sure you will too.

Q: When?
Ok that's the real question. I made sure to let him know that we like to plan well in advance and that y'all have jobs and would probably prefer to film on a weekend. This is what we need to coordinate on. End of April/Beginning of may could work, so we can do it before everyone has plans in the summer. Or maybe we could do it on a long weekend so you have more time to travel? The videos I've filmed with him in the past were filmed in August. If you needed to go down to Grand Bend for two days, which weekend would work best for you? I'm working full time this summer as I'm sure most of you are.

Q: What's in it for me?
Not only will you get to spend a few days with you BEST FRIENDS filming nerf videos in a super sick youtuber house, but he will pay you for your time! Now, he hasn't promised any specific wage as of right now, it can be discussed. Obviously he does youtube for a living and will be making money from this video, and it is only fair that we receive something for our time and super sick suits that we will be bringing. As I said before I haven't discussed this with him yet, but last year he paid me an hourly wage plus compensation for the distance I drove. We can also discuss having him do a shoutout for stuff... he gave my YT channel a shout out for example.

Most of this stuff is still up in the air, but I figured I might as well get the ball rolling with you guys, to see if y'all are even interested. So let me know! Do you want to be in an Aaron Esser film production? What weekend works for you? Please please please ask any questions you have! If we can get a plan together I think this will be one of the best weekends of this year!!

Canadian Regiment
This sounds like alot of fun! For my schedule the only thing I can't really do it take time off in may so it would need to be a weekend like a Saturday Sunday kinda thing. Depending what works for other people I'm game to try and figure something out. Always love an excuse to take my suit out! 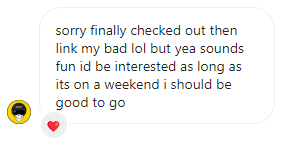