Colonial Regiment
Suit up time! This is probably the last photo of the full suit before painting. I've sanded the helmet down and removed the visor and such in preparation for painting. I realized when I put the bicep pieces on, with my undersuit they're a bit of a tight fit so I need to in with a dremel and remove some plastic. Starting to feel like a real spartan! I did splice up the 3D model for my shins and printed out a piece but it took a lot of filament to do and cost wise, it would of costed too much to print out both shins. I went back and modified the original pepakura file once more to make the shins out of foam and this time it was a success! My main issue was beveling a bunch of edges but I was able to figure it out this time. The front of thighs are accurate to the concept art and then the rest is to the default reach ones since I'm not able to see the other views of it. Also, i'm going to have to split the chestplate in half on one side or both. It's too hard to put the chestplate on, basically have to push the flexibility that I have to put it on.

The COD piece is a little low in the photo but for the final it'll be mounted properly a little higher up to hide the break between the shirt and pants. Also I just forgot to have the butt plate taped onto my back also but it'll be there. Have to make the boots also which will be based off the concept art and will just fit over the boots i'm wearing in the photo. Shoulder pieces are sanded also and ready to paint! Working on the kneepads also. For the right arm, I'm not going to put any attachments there as of now. Maybe in the future I will but you can't clearly see what's there. 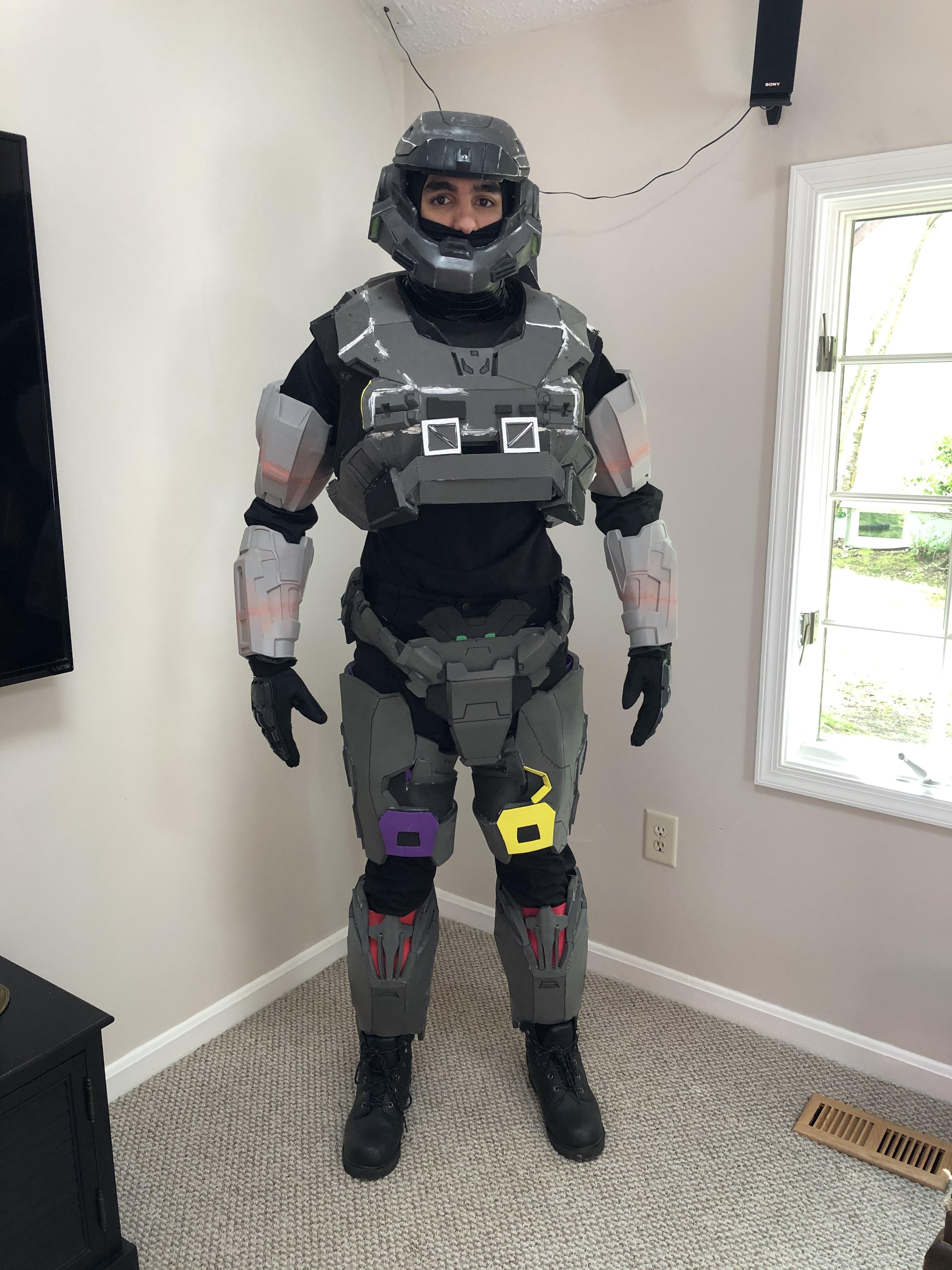 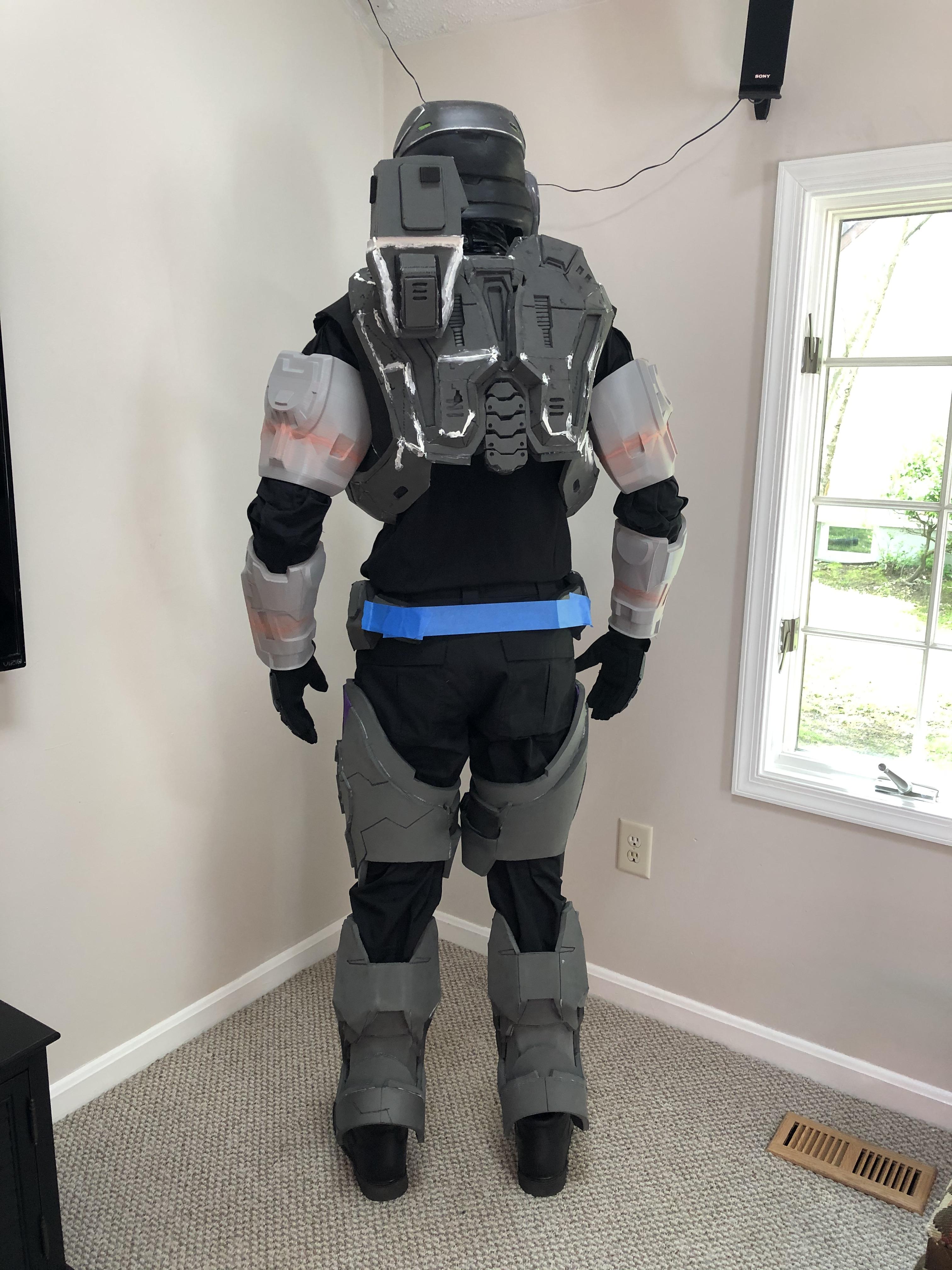 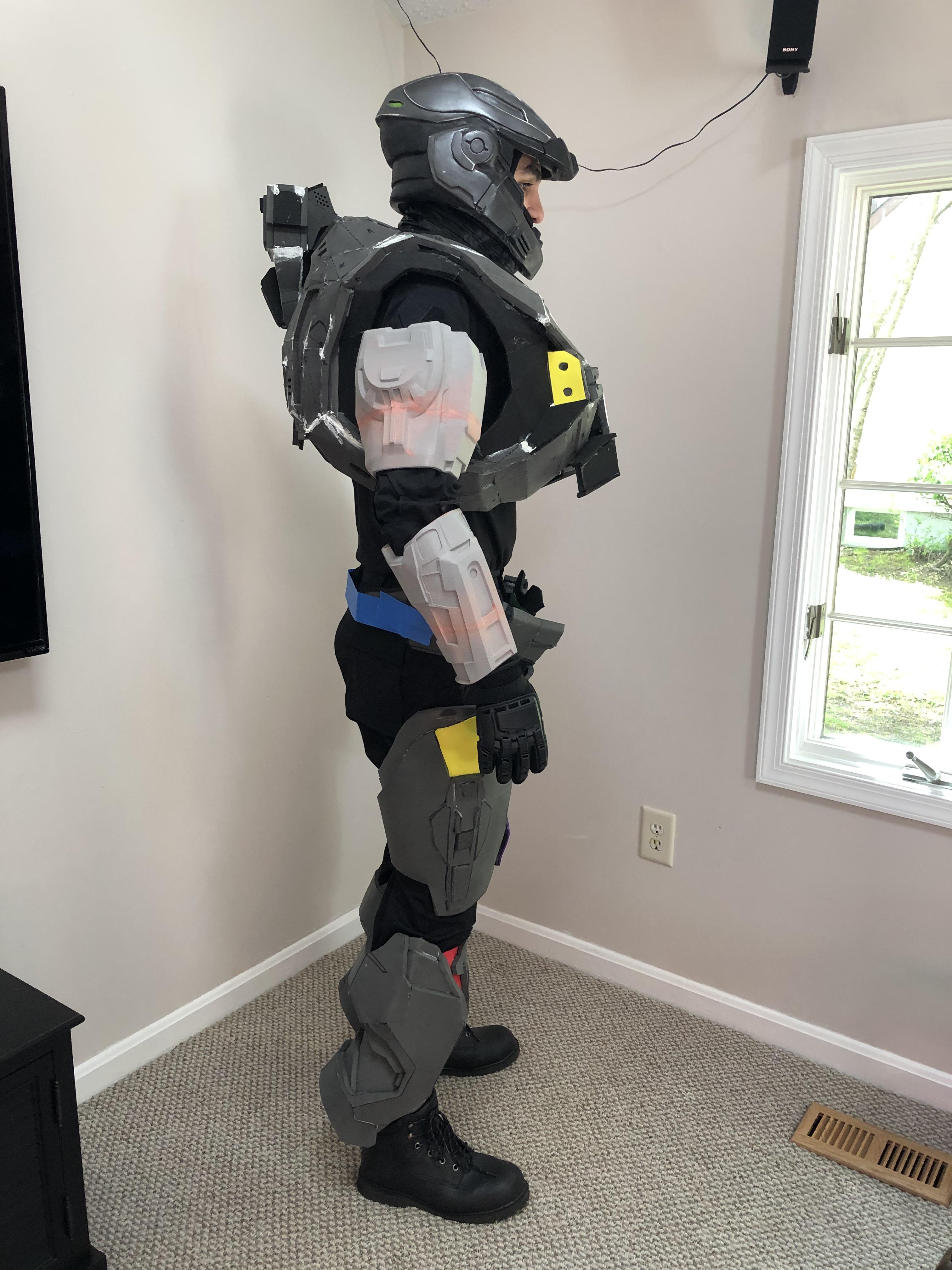 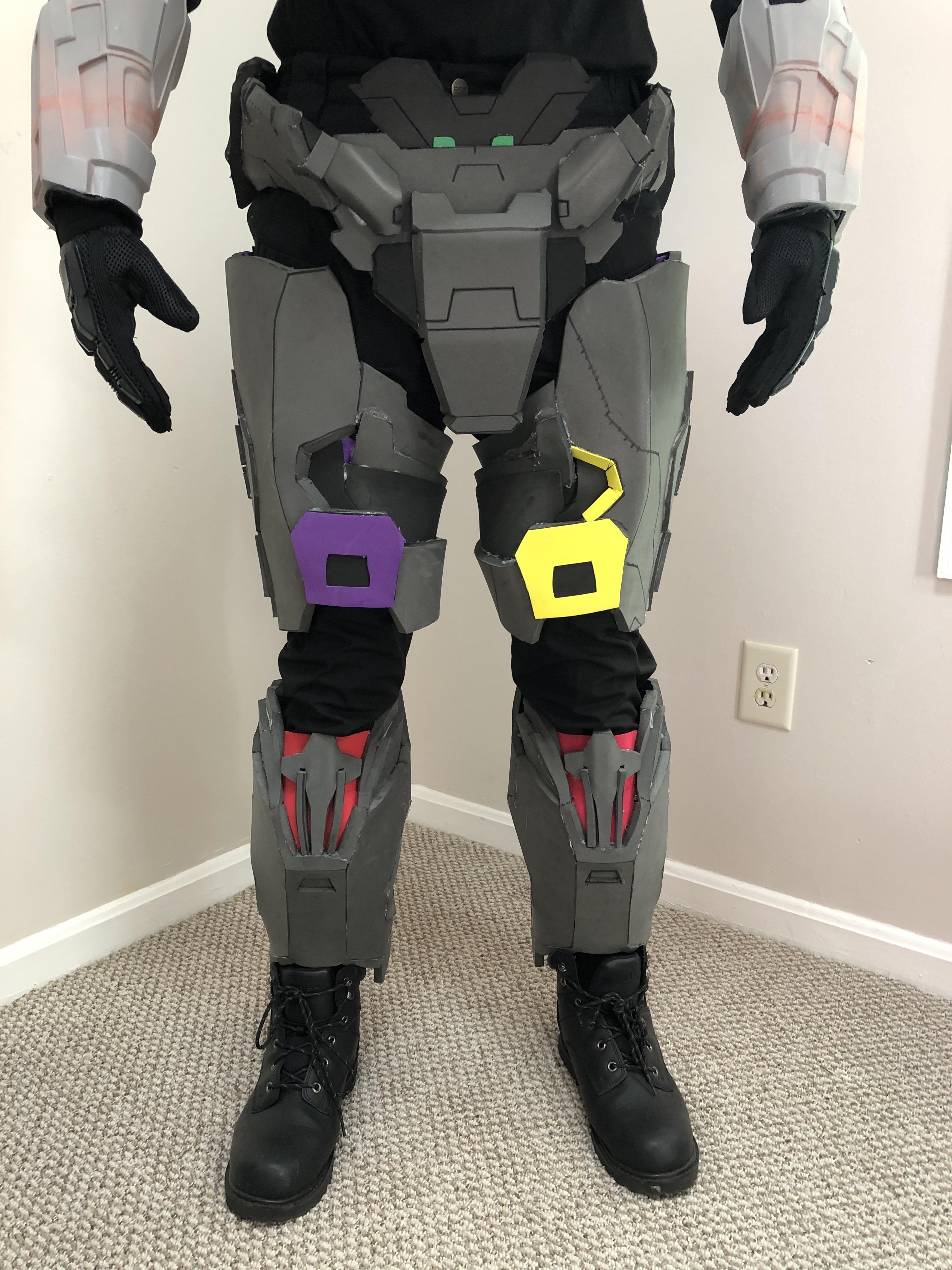 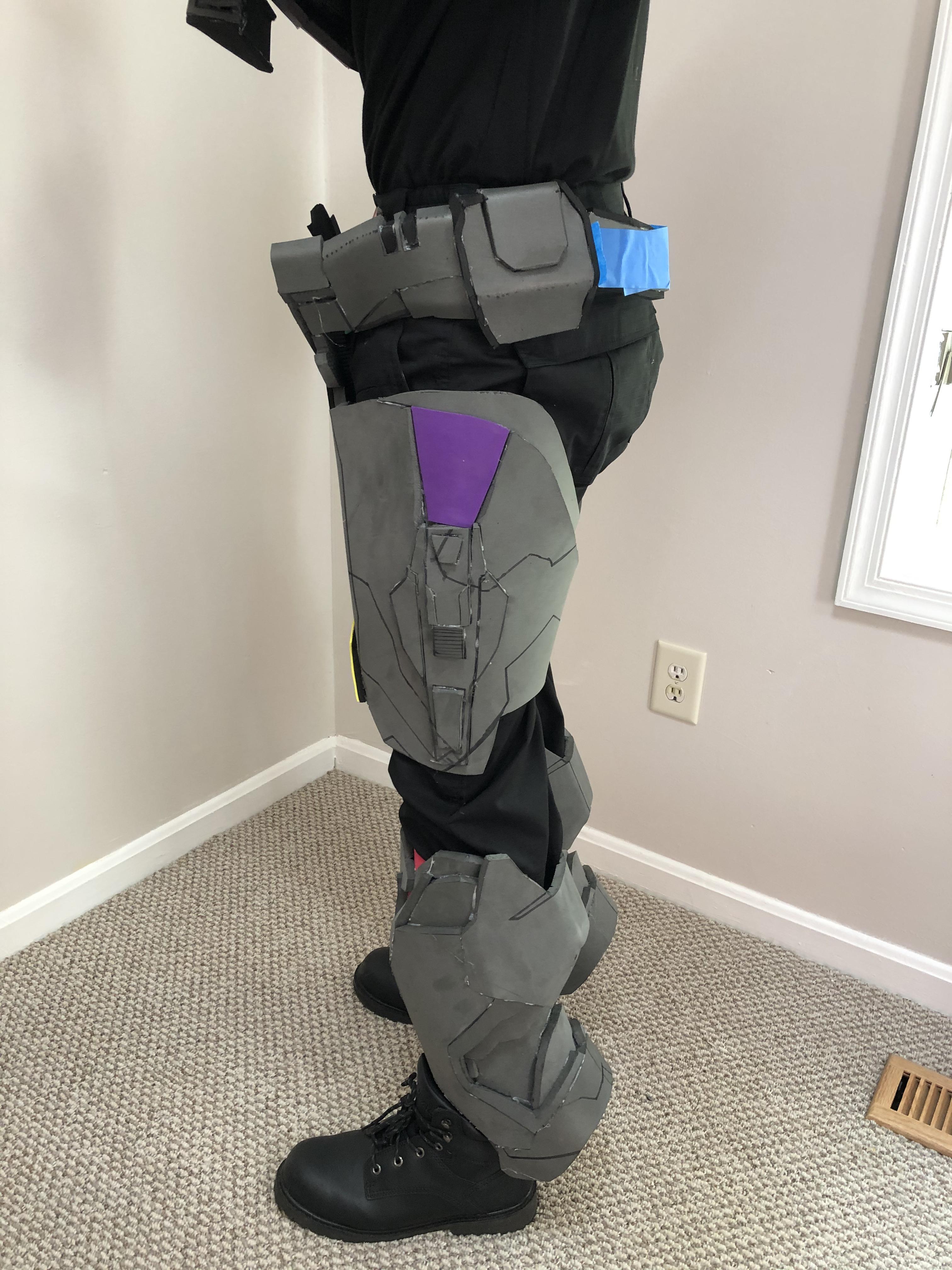 So since I wanna go Tier 3 and I have a big void in my torso, my idea for the abdomen wrap is that I ordered 4mm and 6mm foam from TNT Cosplay Supply and whichever feels better will be used as a base. That will be basically a long rectangle that wraps around my abs and has a velcro connection in the back. Then I will go in with 2mm or 4mm foam (whichever feels better when I get it) and put in the details for the abs on the base. The photo below is just a quick stitch of the front and side ab parts from the concept art and the back is from some other concept art but seems to fit the theme. I will go in and trace this all out and make sure it seems fluid. I will use this vinyl spandex and glue it down to the foam wrap with contact cement. Assuming I do a good job it'll look good might look like I sewed it if i get all the creases right. Since the back will also have the armor pieces on the spine and the armor ability (it'll velcro to the ab wrap) you shouldn't see the seam from the ab wrap. Hopefully this plan works out because I can't sew so I'll have to think of another alternative if this doesn't work out.

Edit: I was able to sketch out a nice pattern. I noticed on back/spine once the butt plate is there and I attach the armor ability module, there isn't much space to see any detail so less work for me. At first, I used a mannequin and drew the design on tape that was wrapped around it to get positioning for the COD and chestplate. Then cut it off and made it flat, scanned it on my phone and scaled it in photoshop. Then put it in Fusion 360 and traced it out. Then I overlayed the picture above and made better adjustments for parts. The Armor Ability modules are just there so I know where the cut off for the detail on the side/back should go to. Probably after printing it out I'll find that there's going to be a need for more adjustments. 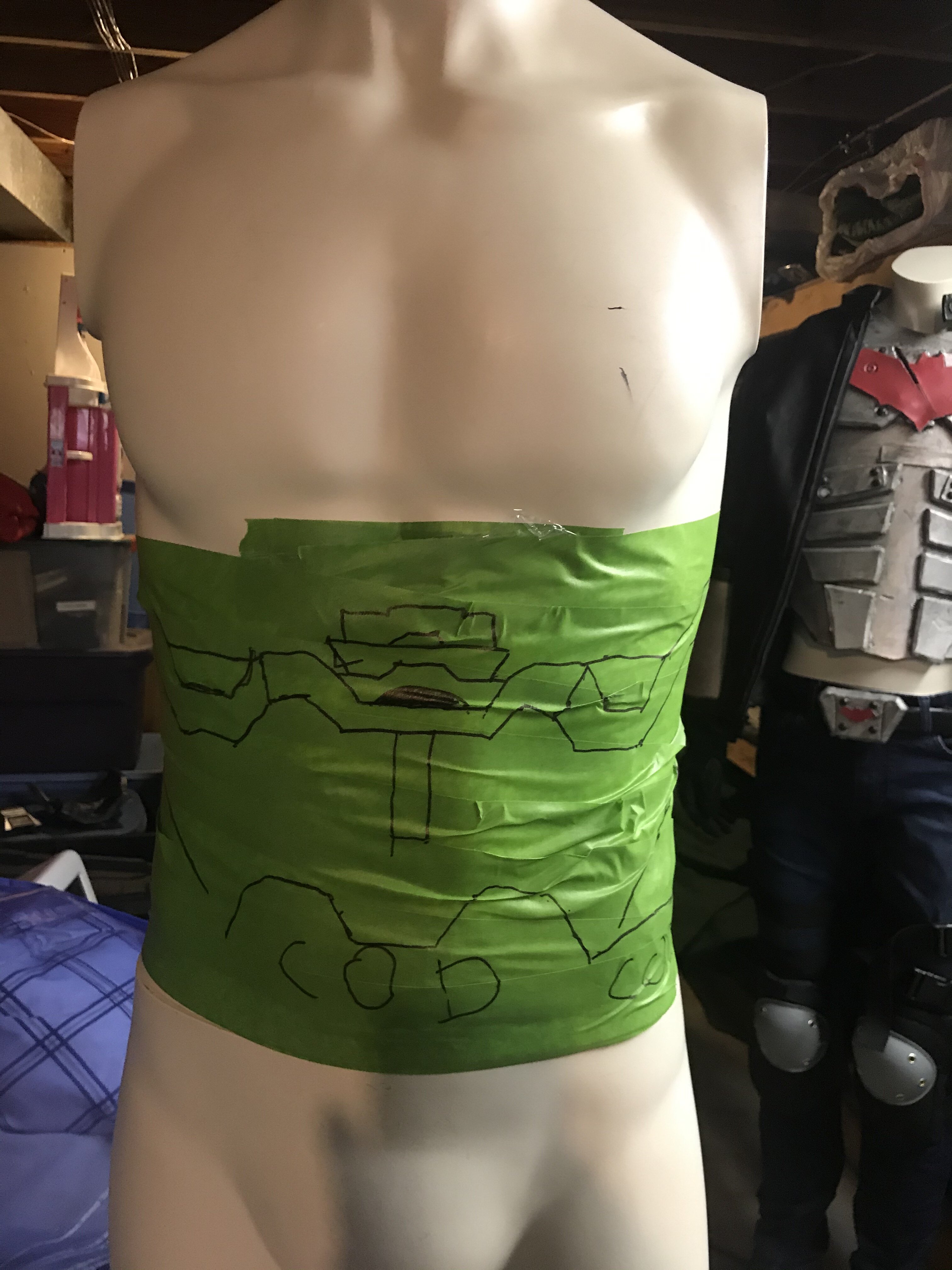 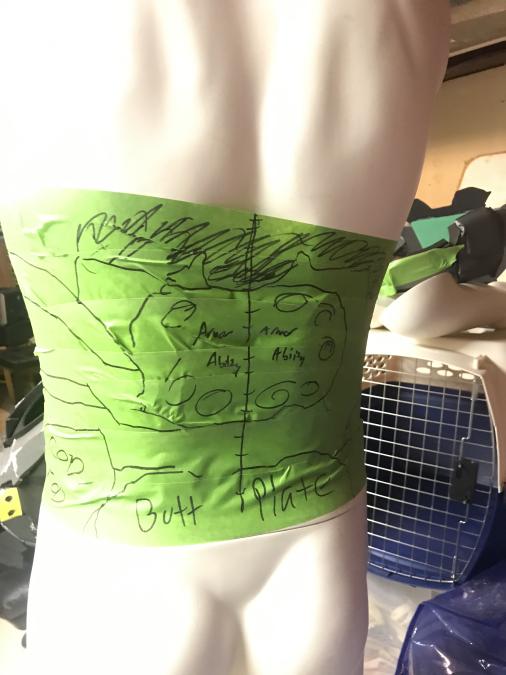 For the boots these are some from the concept art's i'm using so I will base it mostly off of these and have them attach to actual boots. I'll figure out a pattern and it'll look nice.

Colonial Regiment
I've been slowly working on the suit now since mainly now its painting so I have to wait for good weather to do that outside. The Chestplate, COD, Thighs, and Shins have been plasti dipped with 3 layers. I might go in and do one or two more layers. Helmet, Biceps, Shoulder pieces, and Forearms are getting the filler primer treatment and sanded a few more times. For the Biceps when I was suiting up it was hard to actually get the biceps up my arm due to the undersuit i'll be wearing adding more thickness than I thought. I went in and sanded the bottom area of the biceps so there a bit more room down there and that should be enough clearance. I also split the chestplate on the left side with buckles and velcro. I tired to make it so there isn't much of a gap but I think once I mount the knife in, it won't be noticeable unless you get real close. 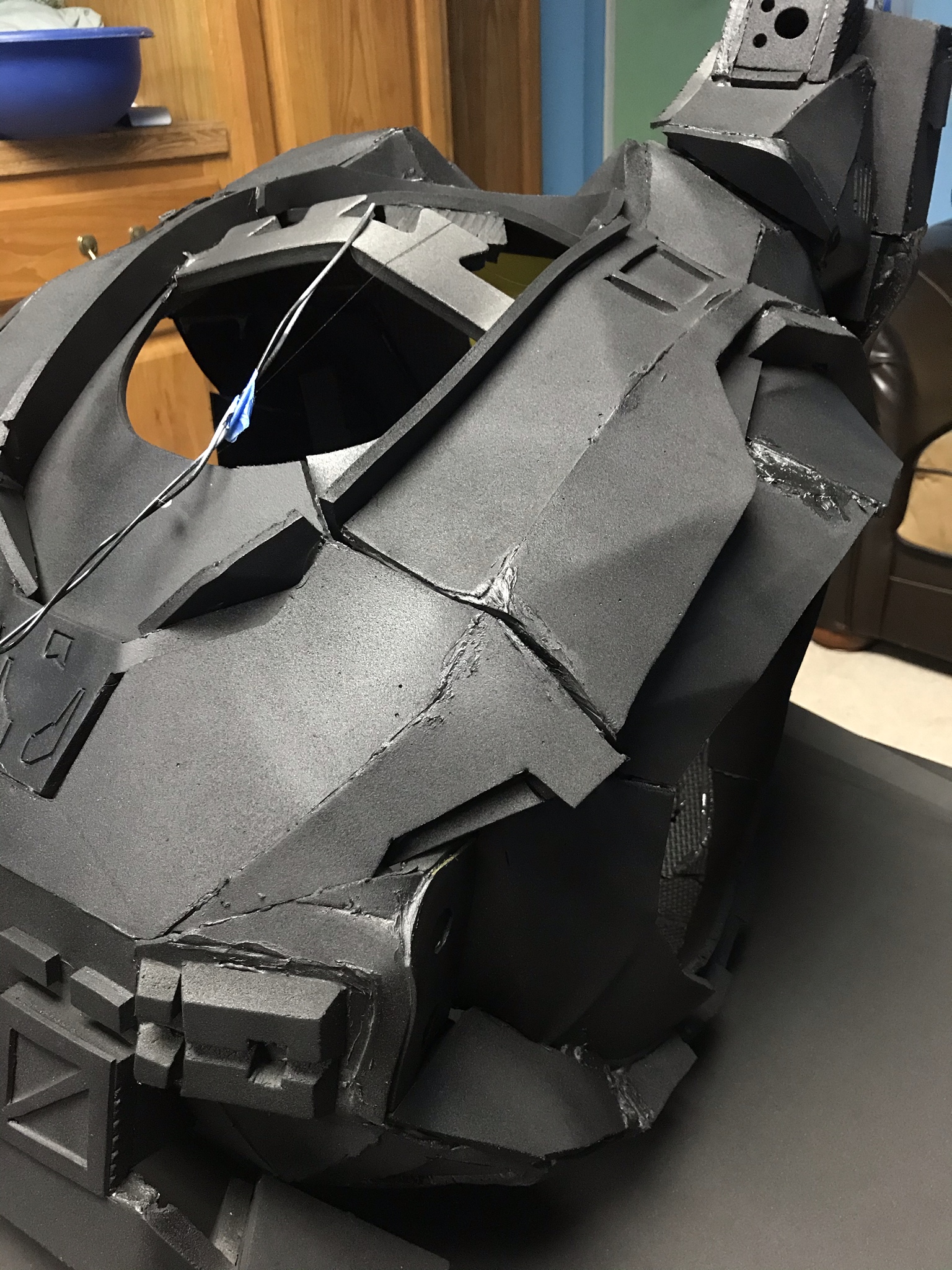 I was able to make the Abdomen wrap area and I think it looks pretty good. Maybe some adjustment slightly. There are 2 buckles in the back that buckle together now but in the photos I have here I didn't have the buckles setup yet so its just taped to me. I'm gunna put velcro attachment points so the COD and Abs align better. I put more detail into the front of the ab wrap also. Also I should of mounted the chestplate pouches to see if any other void is there but I'm sure it'll be fine! I'm working on the knees probably will update this post with pics if I get it done today. I also am doing one last sanding run on the DMR and then will start to actually paint it. 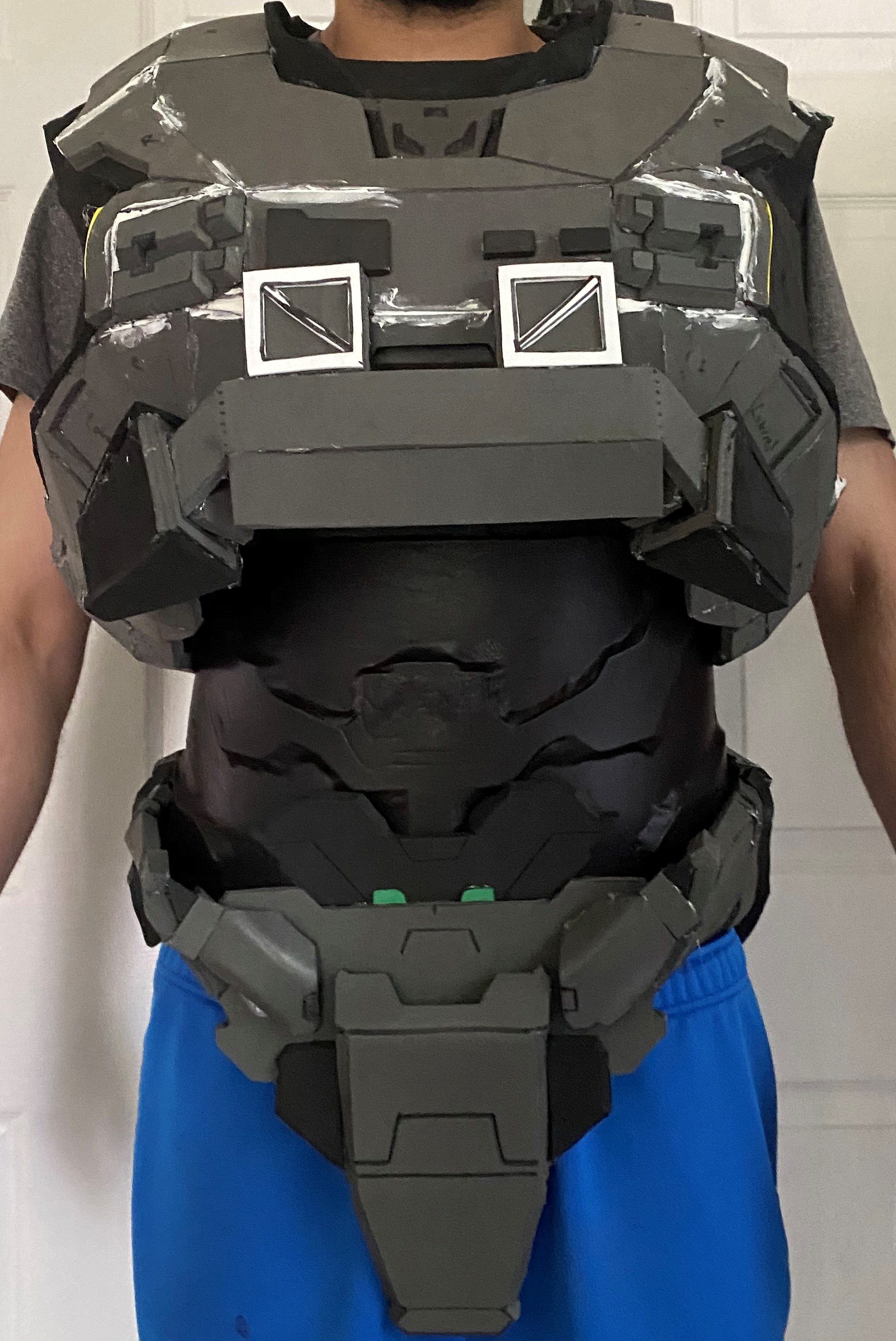 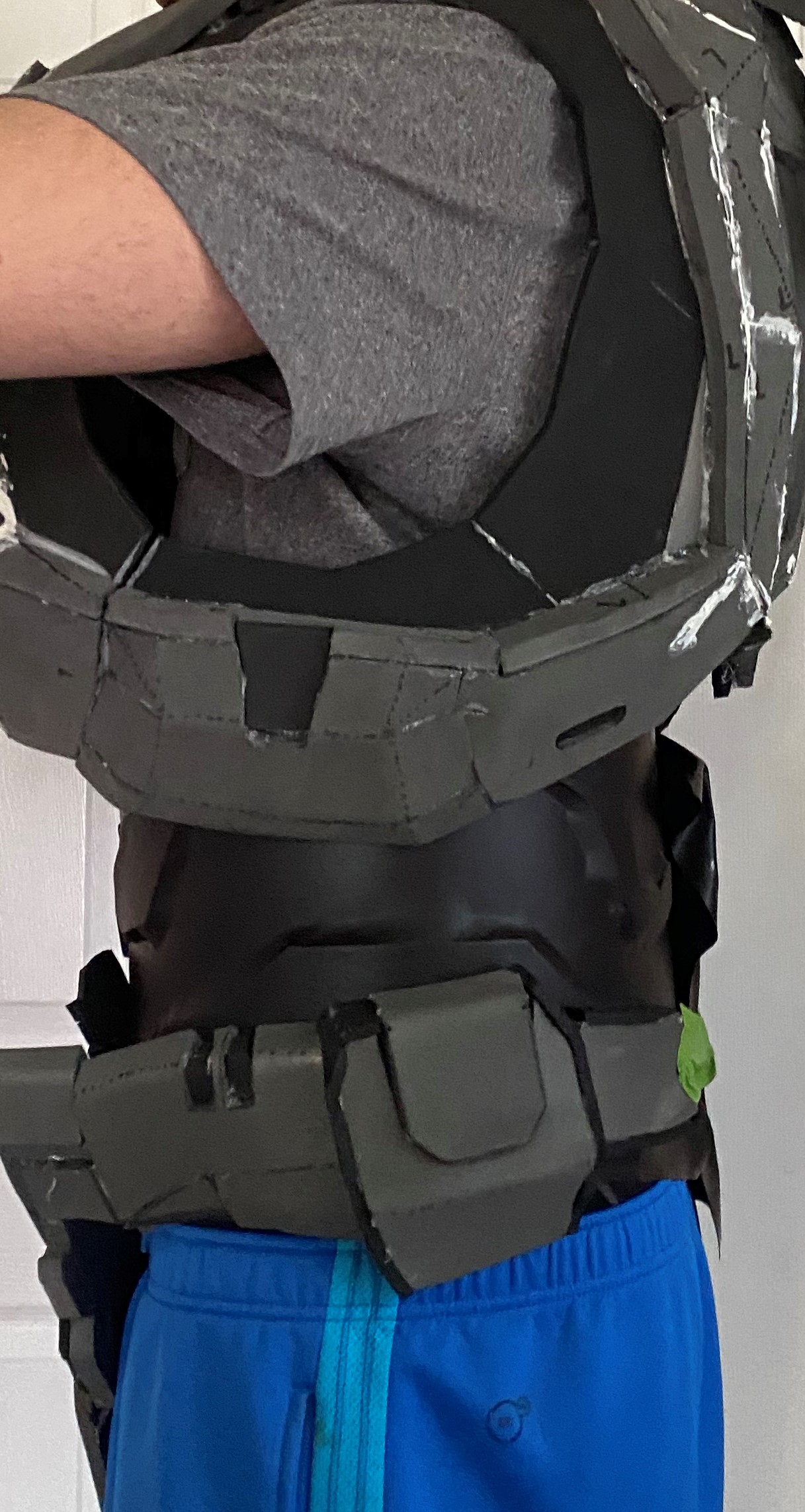 Yesterday at 2:20 PM
UltimateSpartan
U