those forarms especially, Chef's kiss on the lettering.

Still alive, working on one of the shins (at least from my left the armour will look done >_>)
Probably 12 hours total of sanding went into this. Most of it by hand. Its paid off, but its real RSI hours.

The kneecap, im resin coating, as on a recommenation of various members of the 405th, it should increase its resiliance when taking a knee.
Will take a bit of sanding back to resolve the drips ill end up with on the edges but that should be childs play comparative to the beast that has been the shin.

Tried making some foam pouches for the legs, reminded myself how bad i am at foamcraft at this point in time, and sourced some from Mr Bradley. Could have printed them, but at this point id rather have something that requires minimal sanding. Hopefully they arrive before MCM London in october.

Next update should be one complete (barring the aforementioned pouches) shin, weathered, assembled and with all the straps in place. 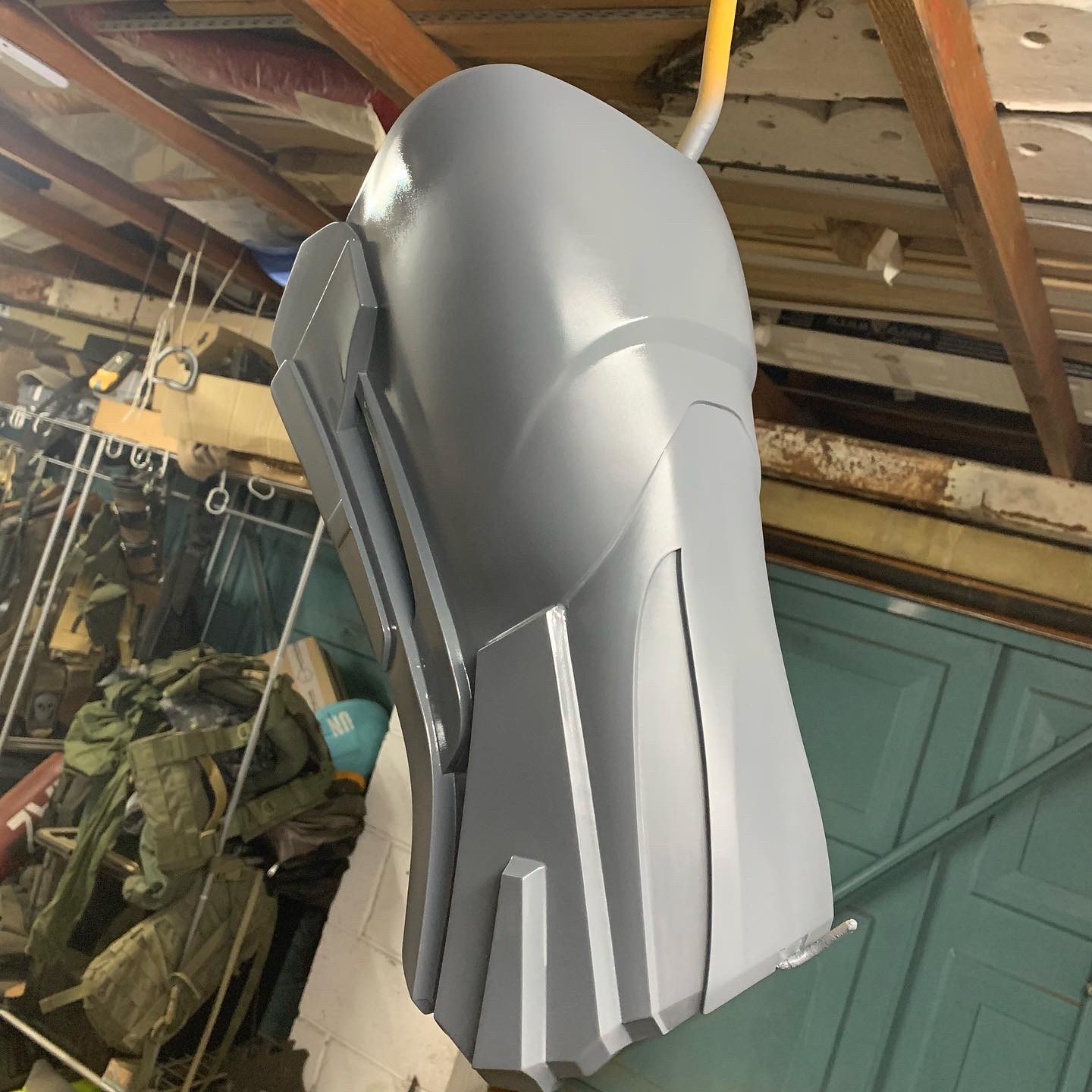 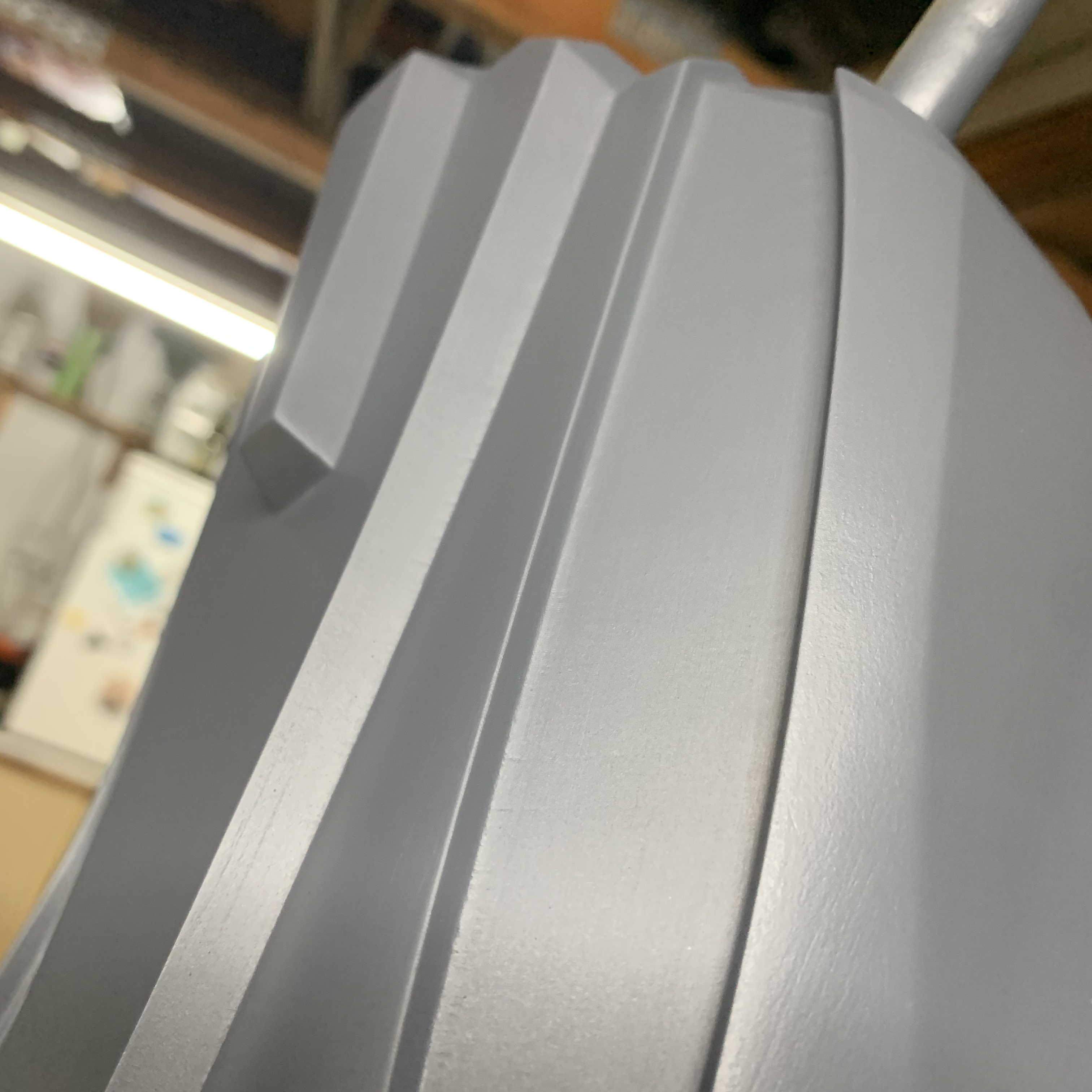 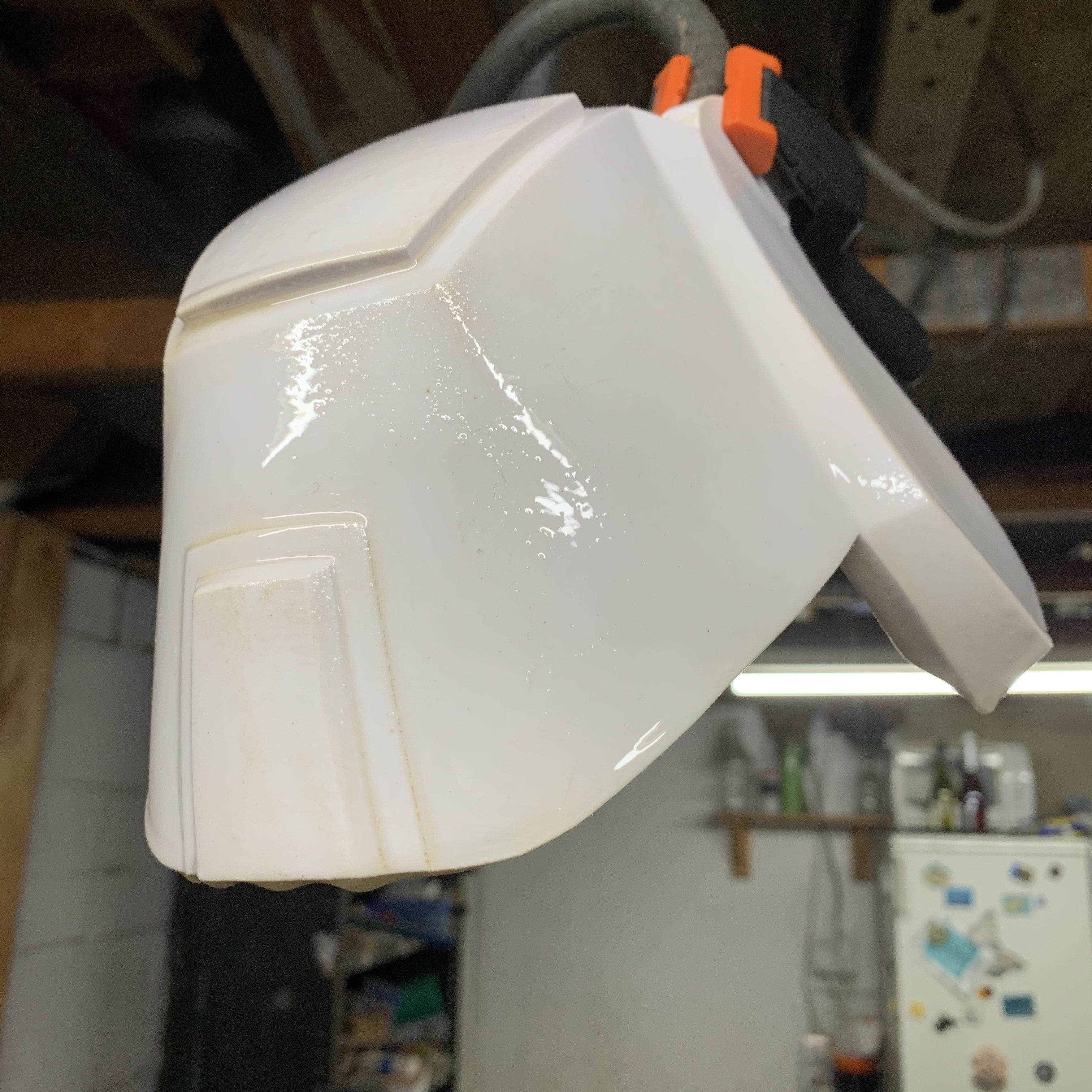 those forarms especially, Chef's kiss on the lettering.
Click to expand...

Thanks! theyre vinyl decals cut using my cricut machine. Mostly guesswork from the ingame textures for some of them but they do look the part!

12 hours of sanding? That's a lot of time but we can see the results of your work. And the thing with working with foam... You will definitely better at it with time. I'm sure of it.

And after what feels like an eternity, one shin is done (barring padding and attachment to the undersuit).

Now i just have to go through all that again for the other one.
*cries*

Something i didnt mention in my last post is how the knees and calves on this have been altered slightly from brinks indended geometry.

The kneecaps stuck out quite far due to the required scaling to fit me (110%) as such the "wings" were heat gunned until pliant and bent inwards towards the middle slightly, this prevents them catching on eachother when walking, also some material was dremelled off on the inside of the wings to prevent catching on the thighs.

The shin armour itself screws together in two halves, but there are small "tabs" on the inside to facilitate this that stuck right into my calf when worn, as such those have also been dremelled nearly flat. 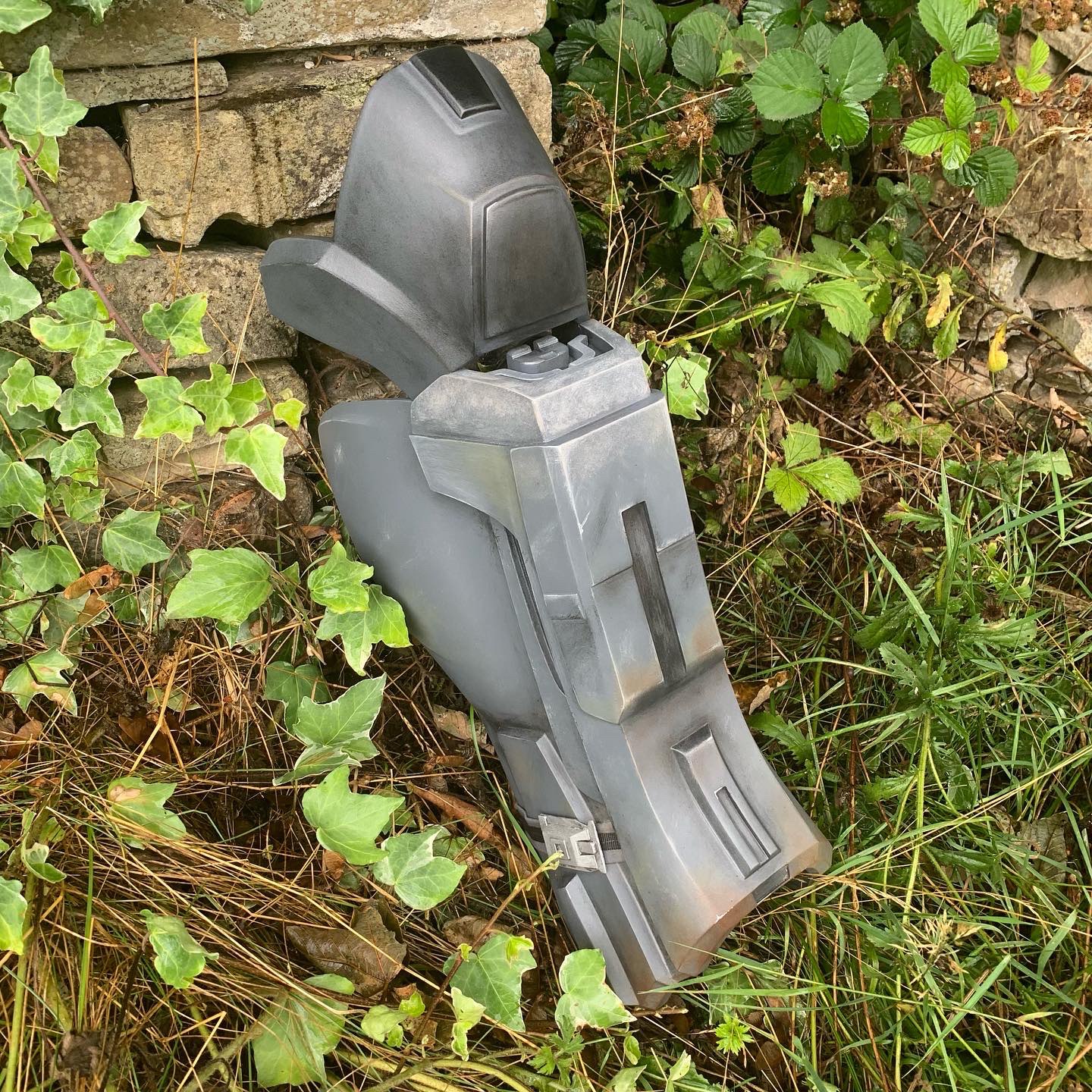 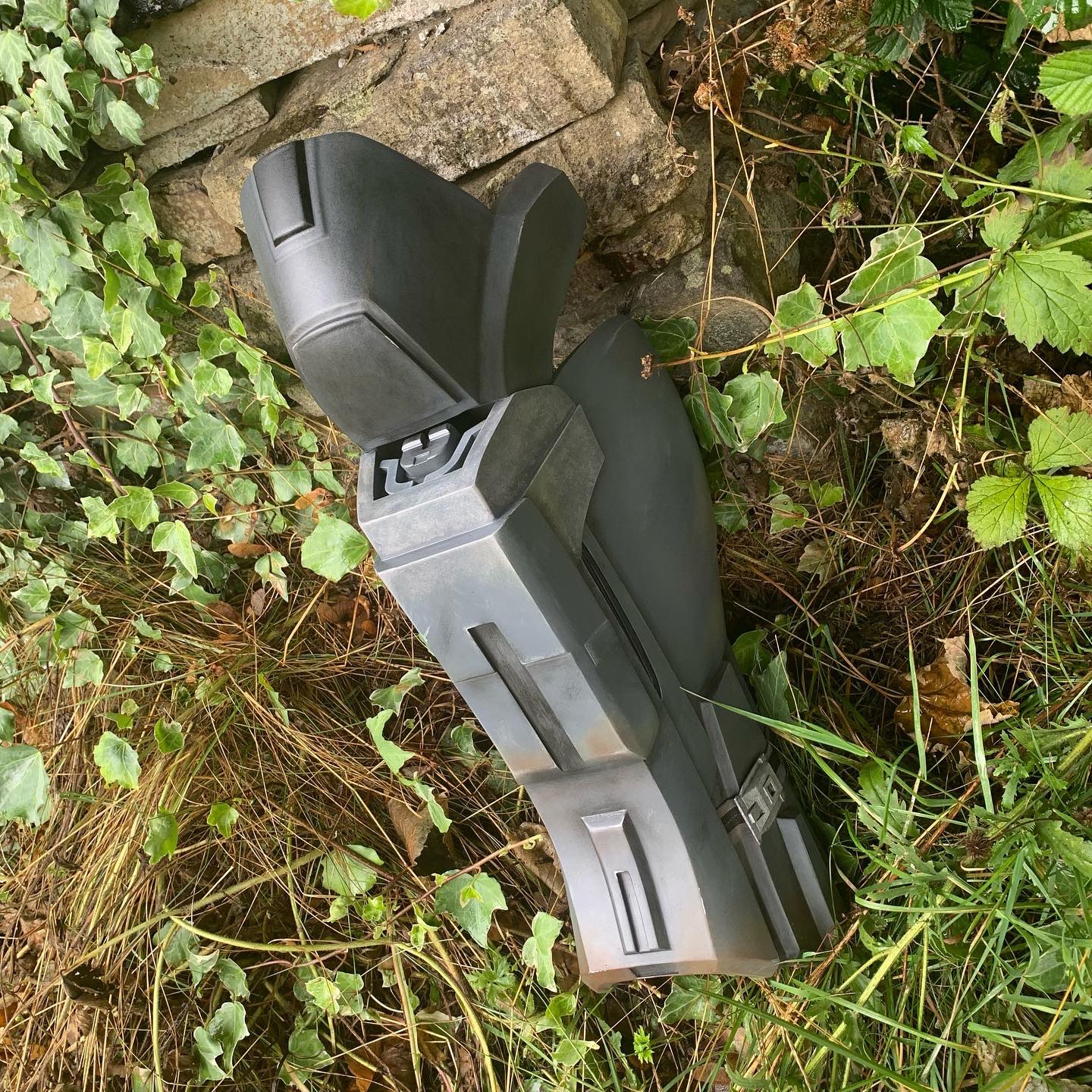 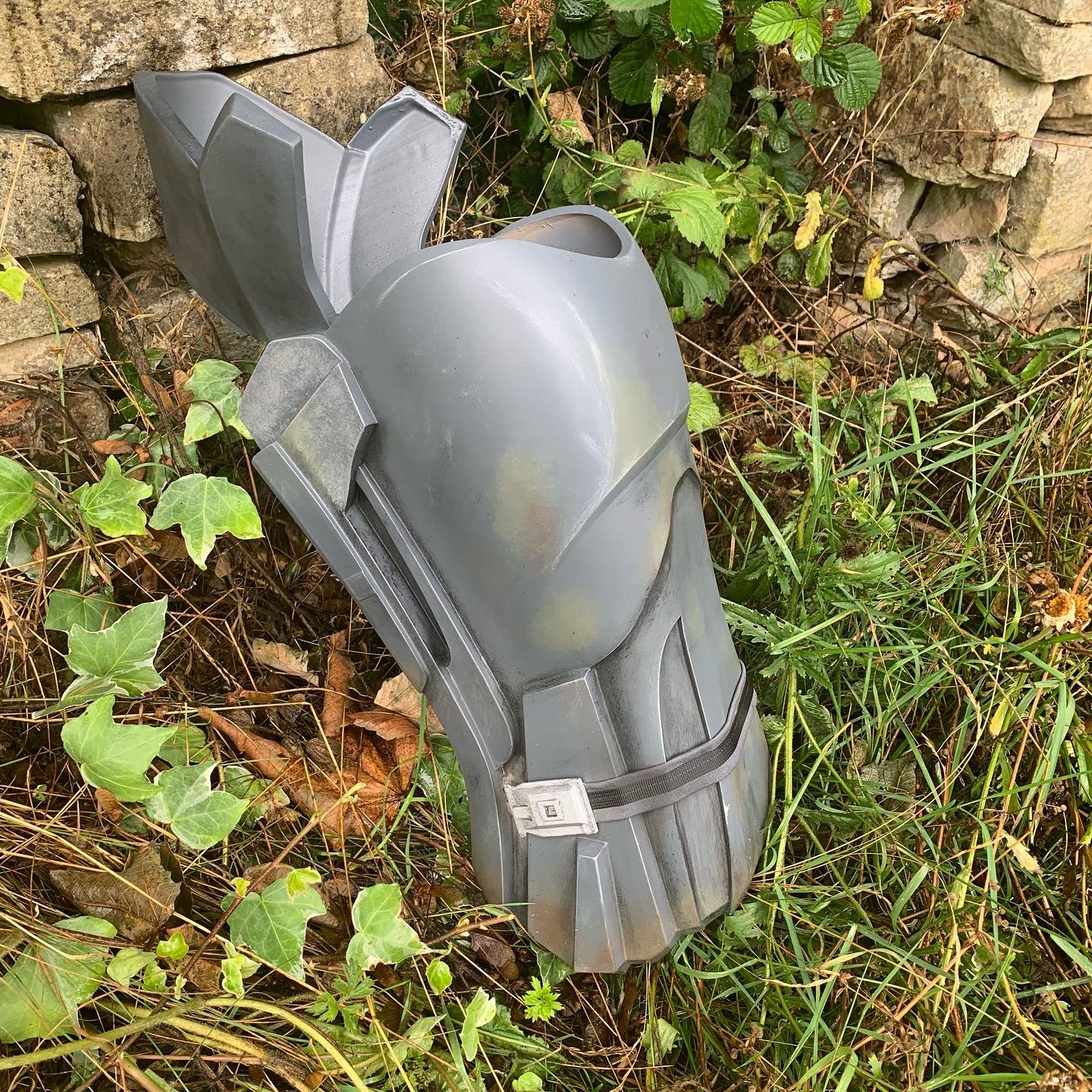 Colonial Regiment
Your legs are beautiful!

That is some amazing work. Wow.

More distractions from finishing the armour.
Decided i needed a SOCOM. My little nerf magnum just wasnt doing it for me.
Brinks files to the rescue again.
PLA+, Black spraypaint, Graphite powder, tamiya white, light green and red, and some micro krista clear. Oh and grip tape, because all pistols should have textured grips. 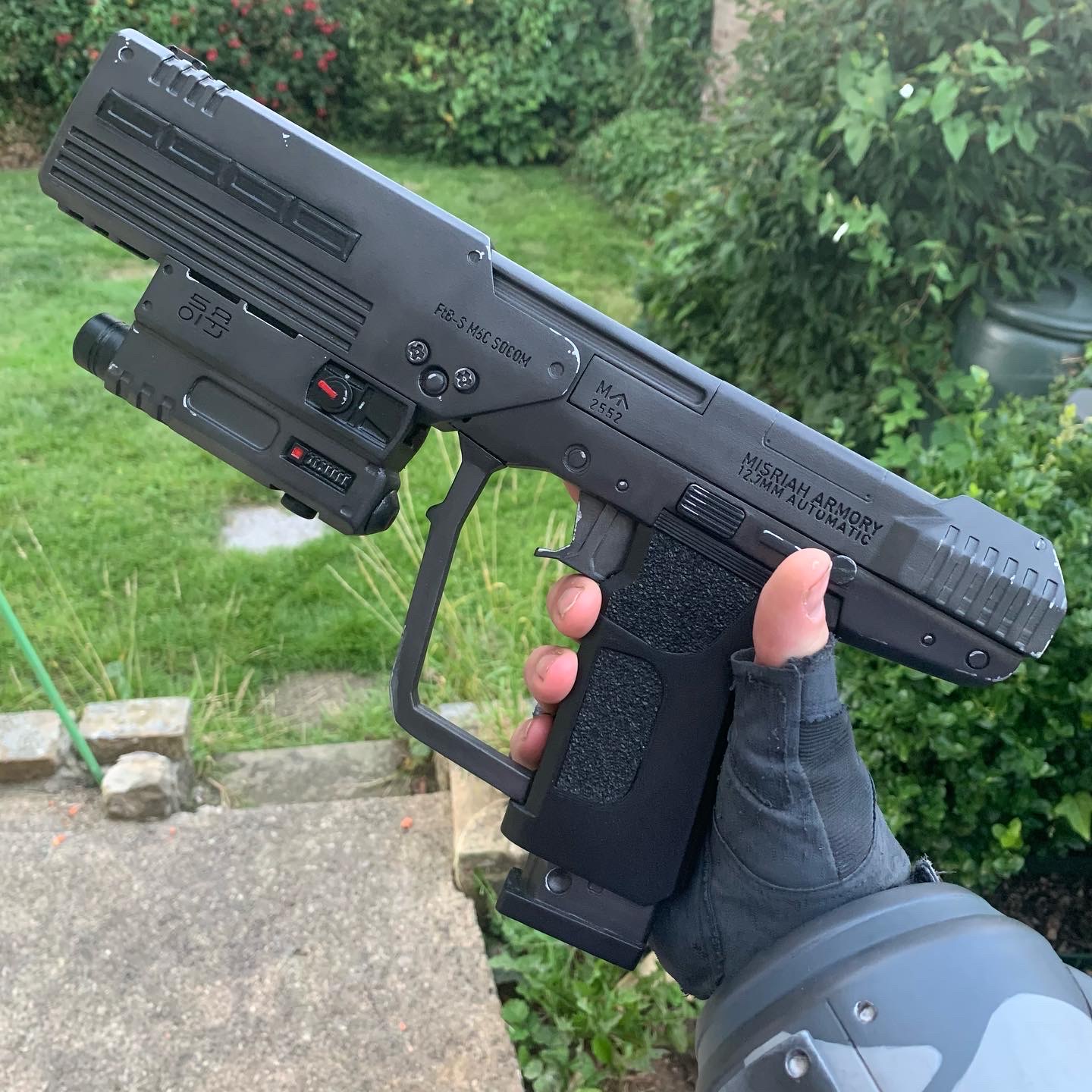 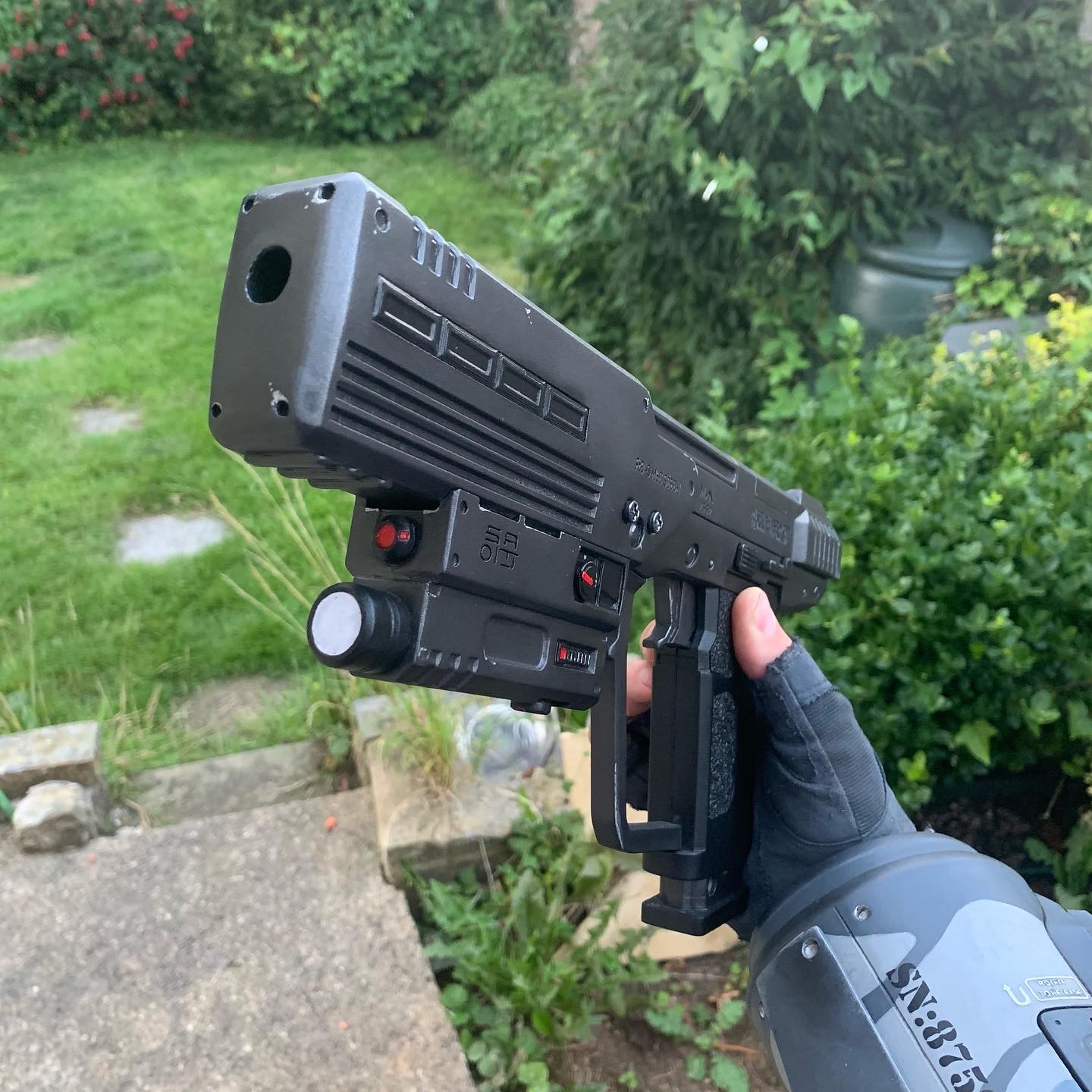 Wow I love your ODST. Looks amazing so far.

So since my last update ive spent most of my life on the remaining shin.
Which i then slam dunked onto a concrete floor and had to repair, taking twice as long as it should.
Its now painted, but awaiting straps, pouch attachment, etc.
Otherwise i templated some gaskets for the thighs and gauntlets.
Impressive as brinks are, EVA foam inserts were a mite....pinchy... on the old legs, so i went with neoprene instead.
Less thick, more comfy. Ill take the hit to accuracy for being able to walk.

My pouches from Mr Bradley arrived so those are getting painted, tho i suffed a setback with one as i didnt wash all the mould release off enough and...bad times.
Its getting redone, the rest are nearly ready for attachment tho.

And last but not least a beauty shot of (nearly) everything so far. 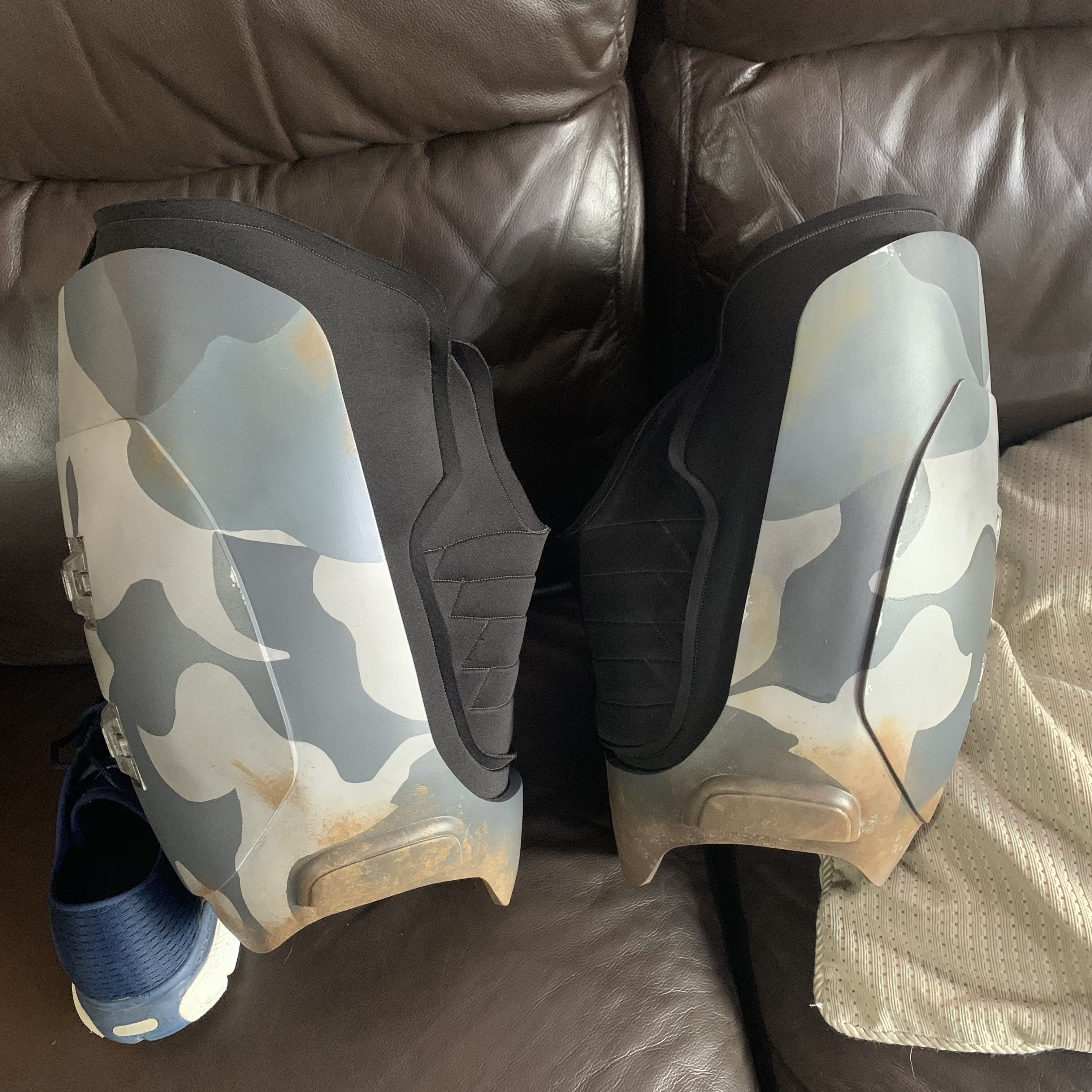 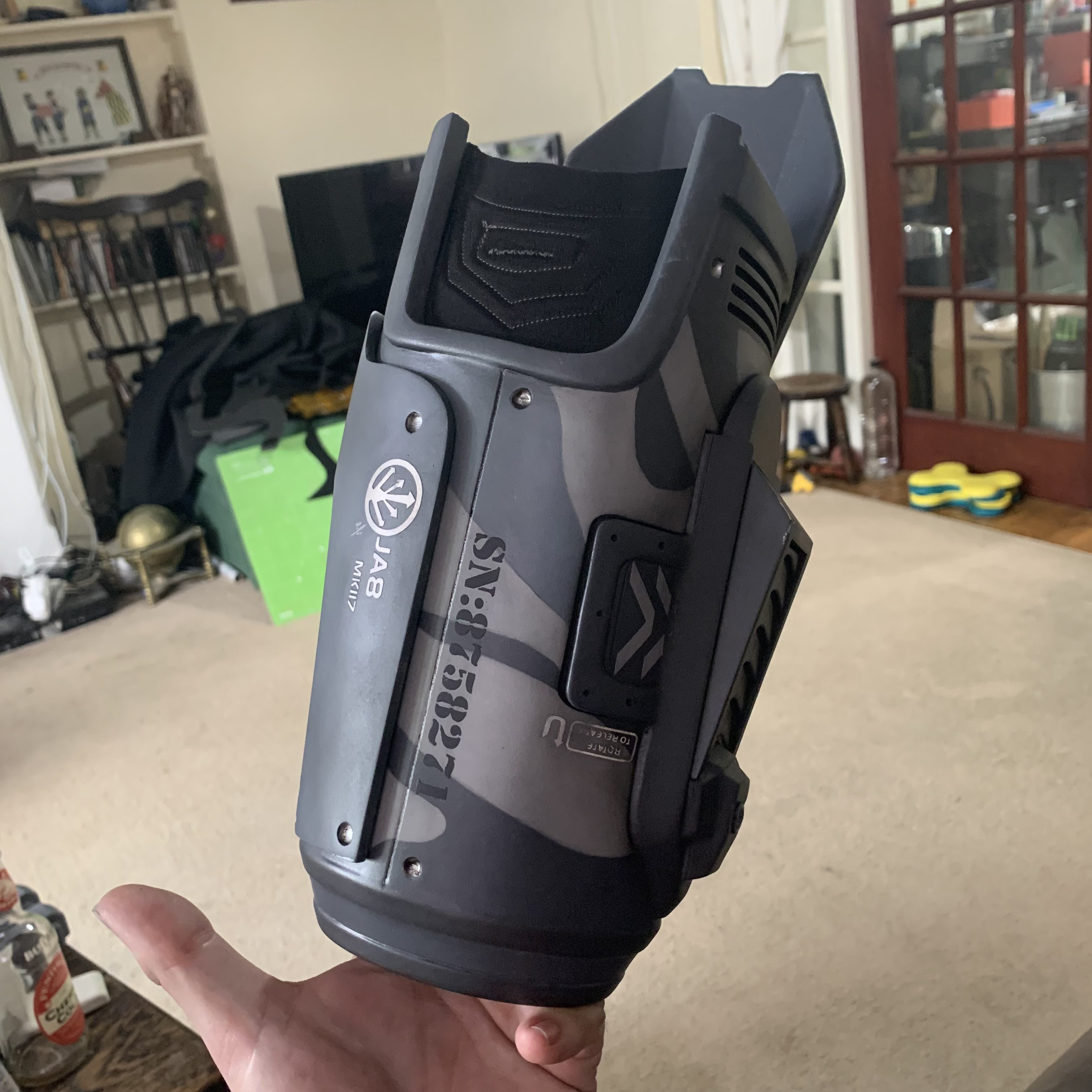 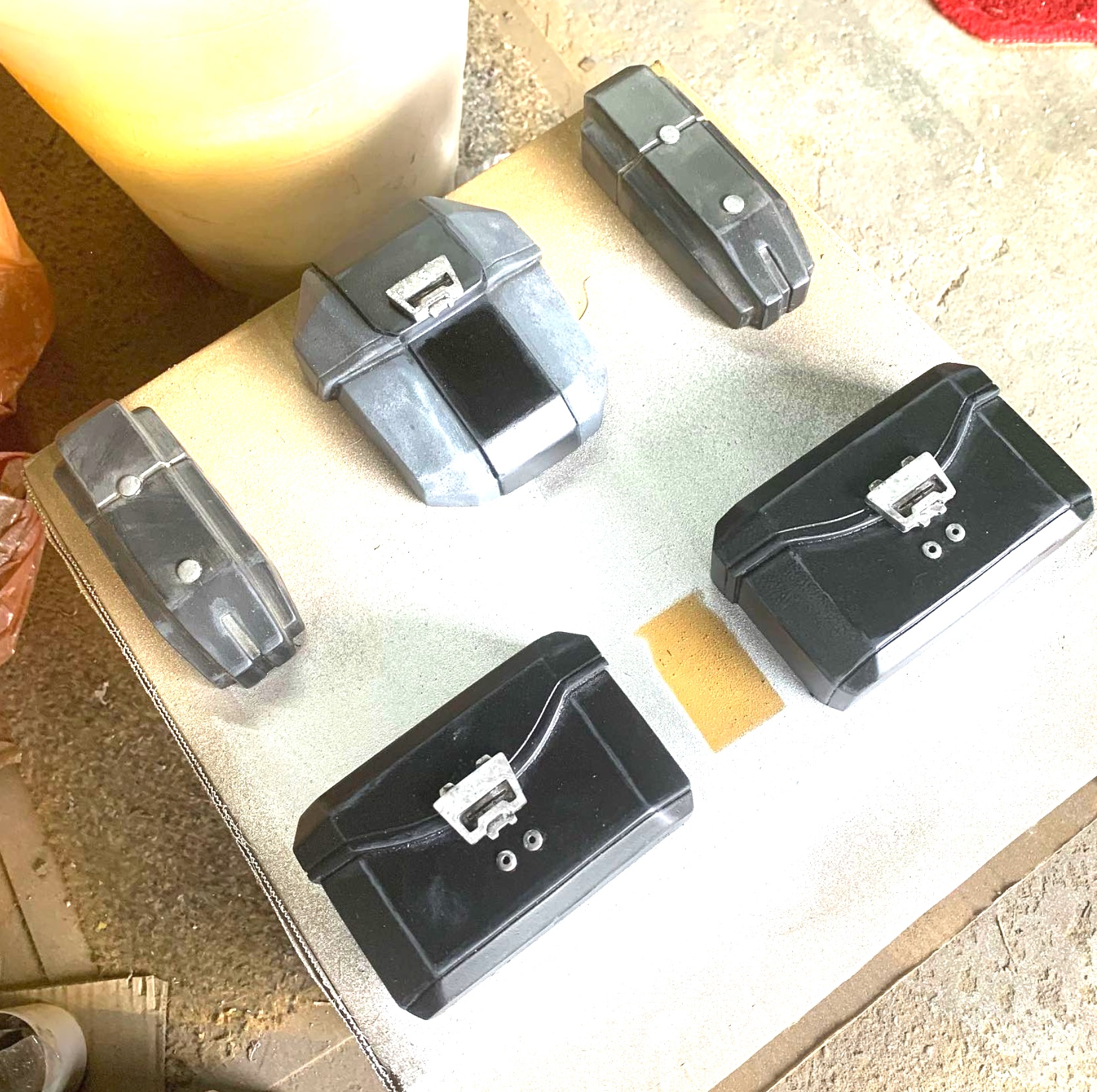 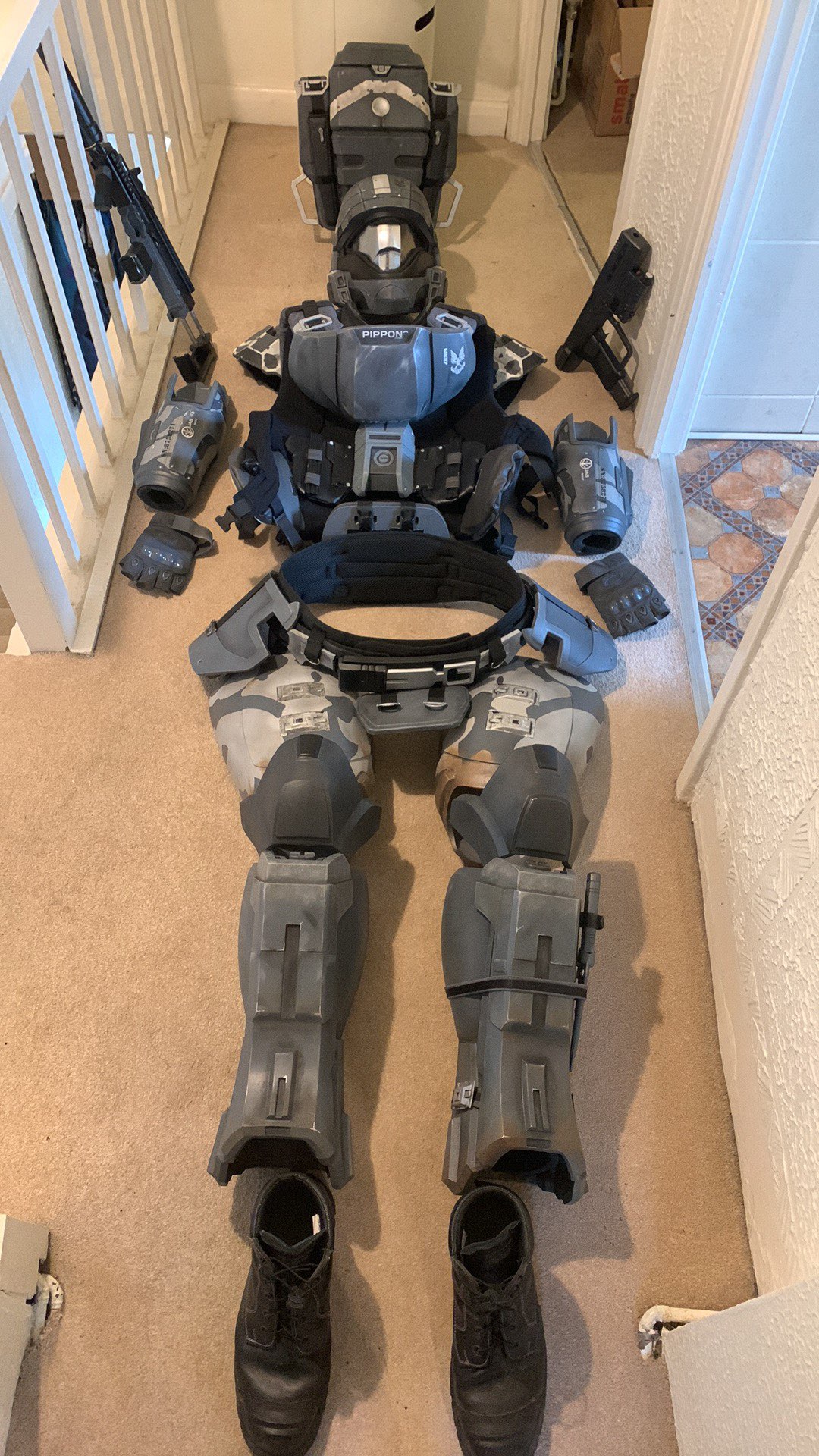 Not much to update, been working on finishing touches.
Second shin, all its strapping and greeblies is complete 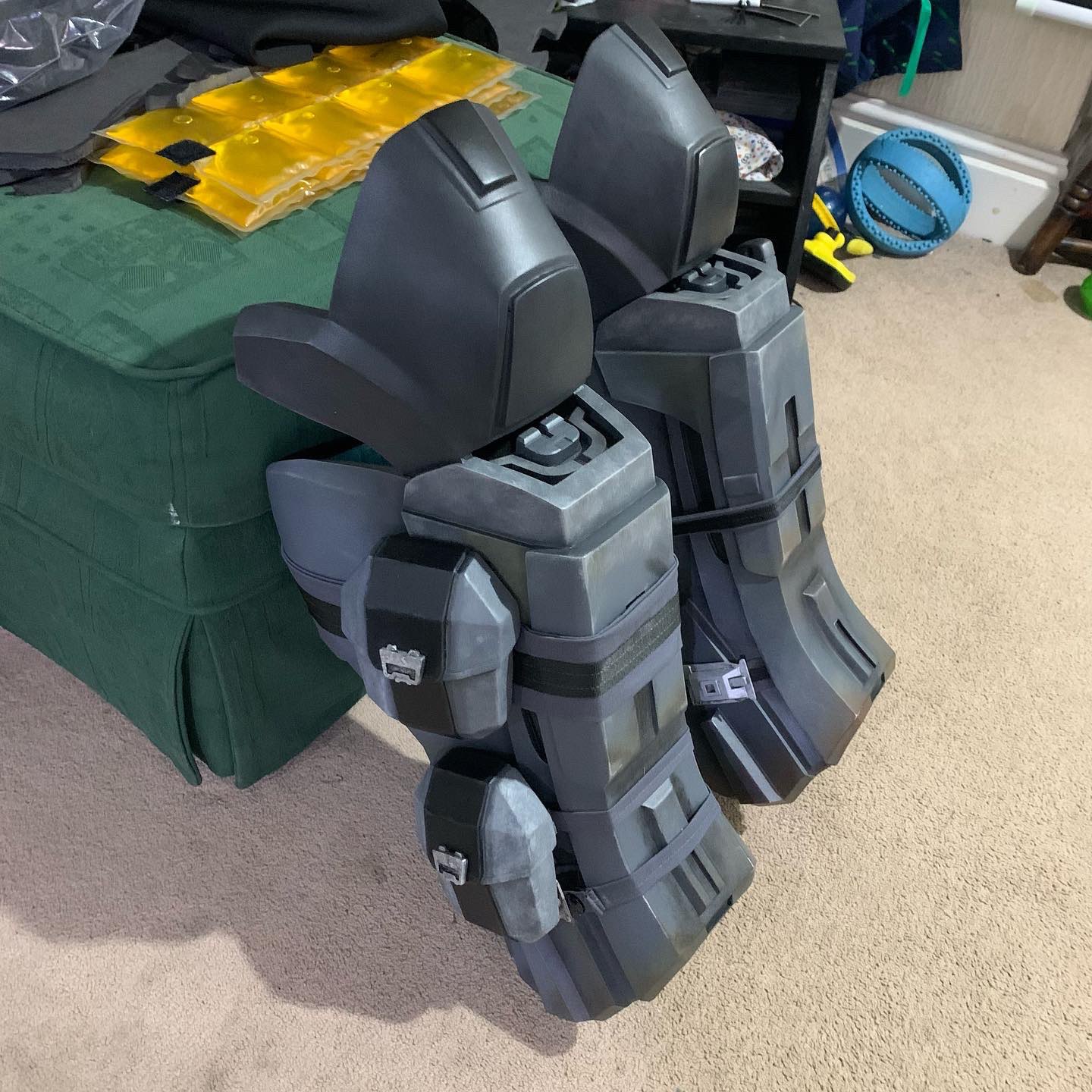 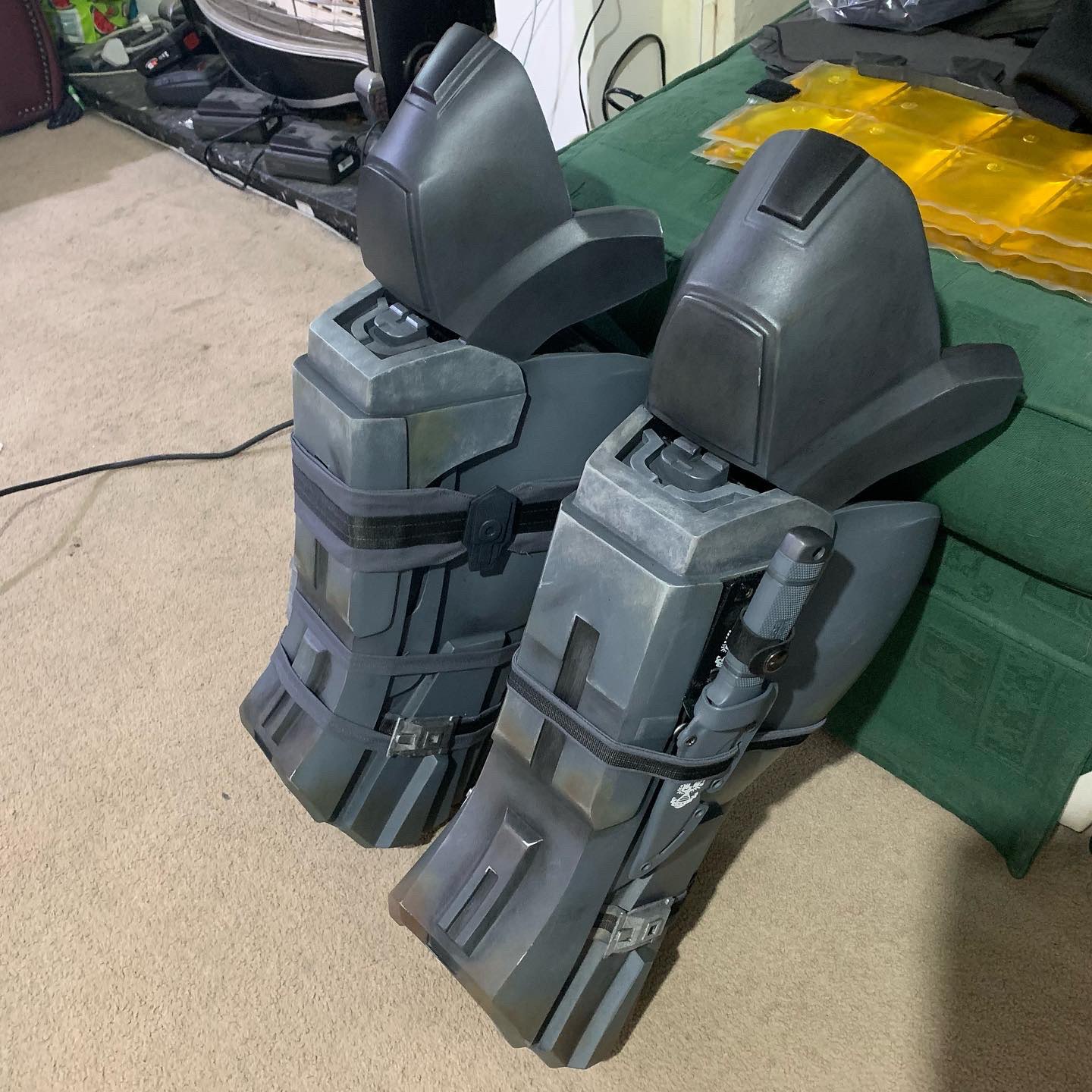 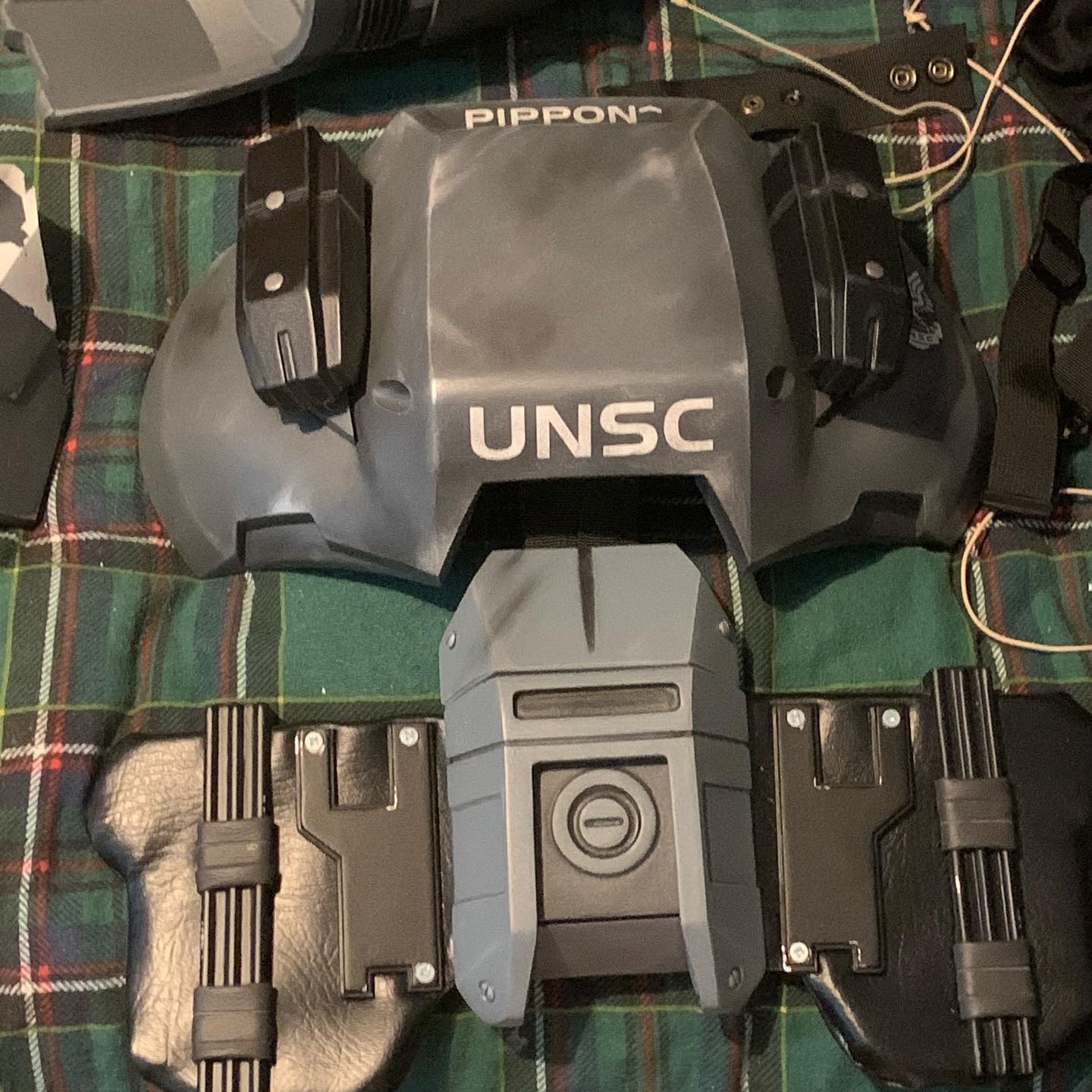 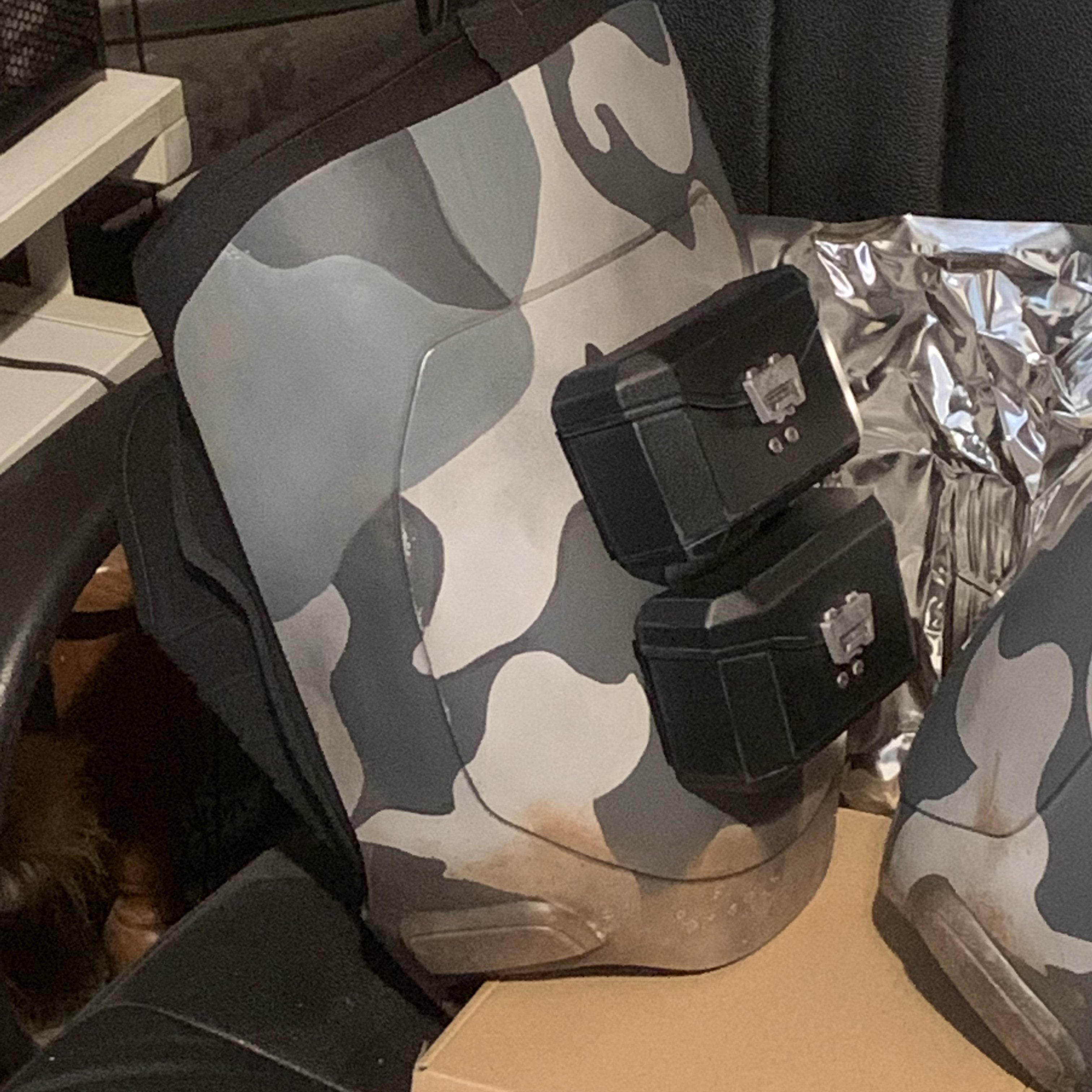 Did a wee test fit. 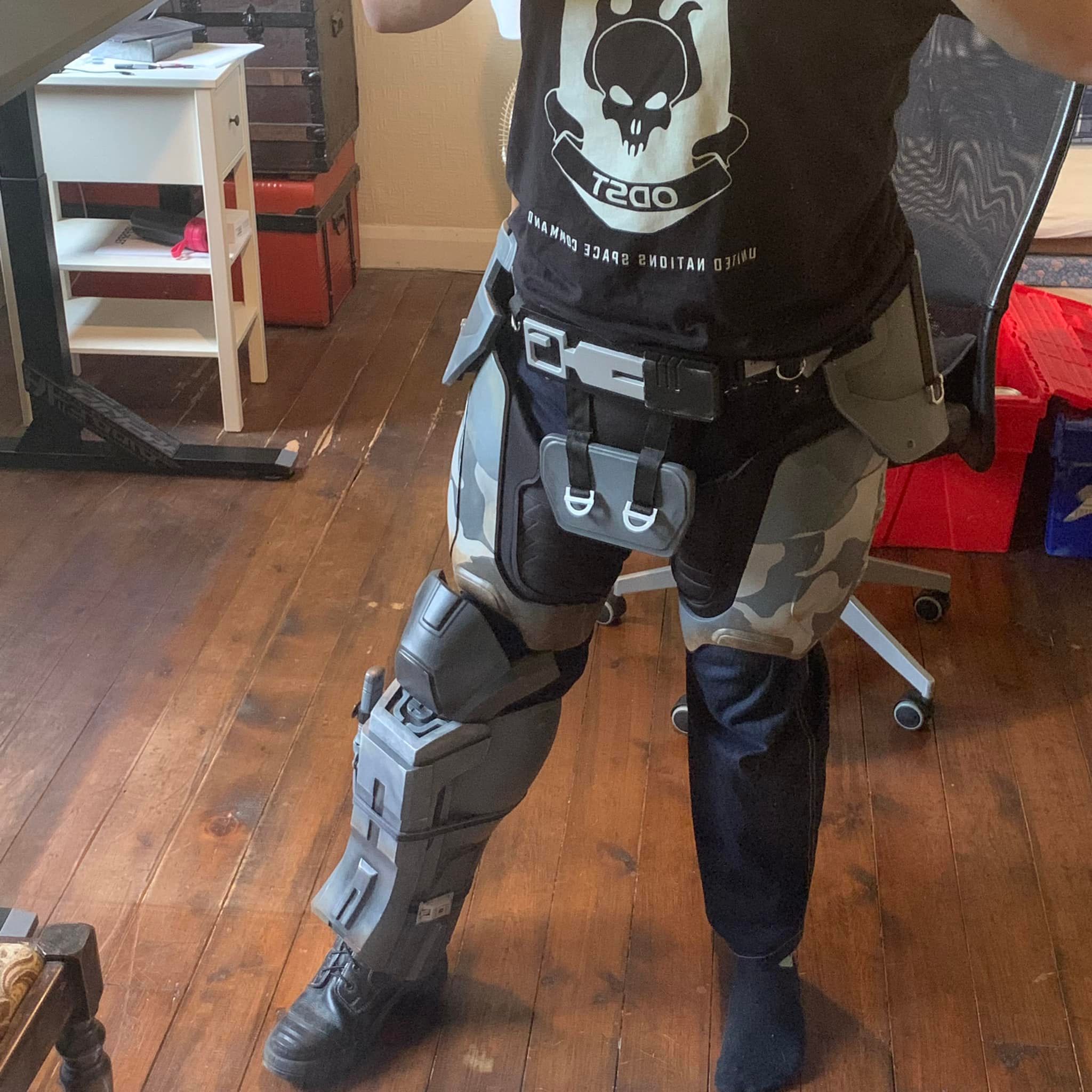 And now im workin on the boot caps, which ive veered off Brinks files for, and gone for MoeSizzlacs as they worked a bit better with the attachment method i had in mind, which is an elastic and velcro harness styled after in ingame strapping system.
All seems to work as expected!

So! I did a test suit up with my fiance as handler and photographer, and these are the results!
Did learn a few things, like i need to modify the boot caps for more (read, any) mobility, and the visor makes me essentially blind, so thatll need swapping out, but otherwise a successful run!
So thats in essence it, besides some grenades, and bicep protectors, its done barring some modifications to improve comfort! 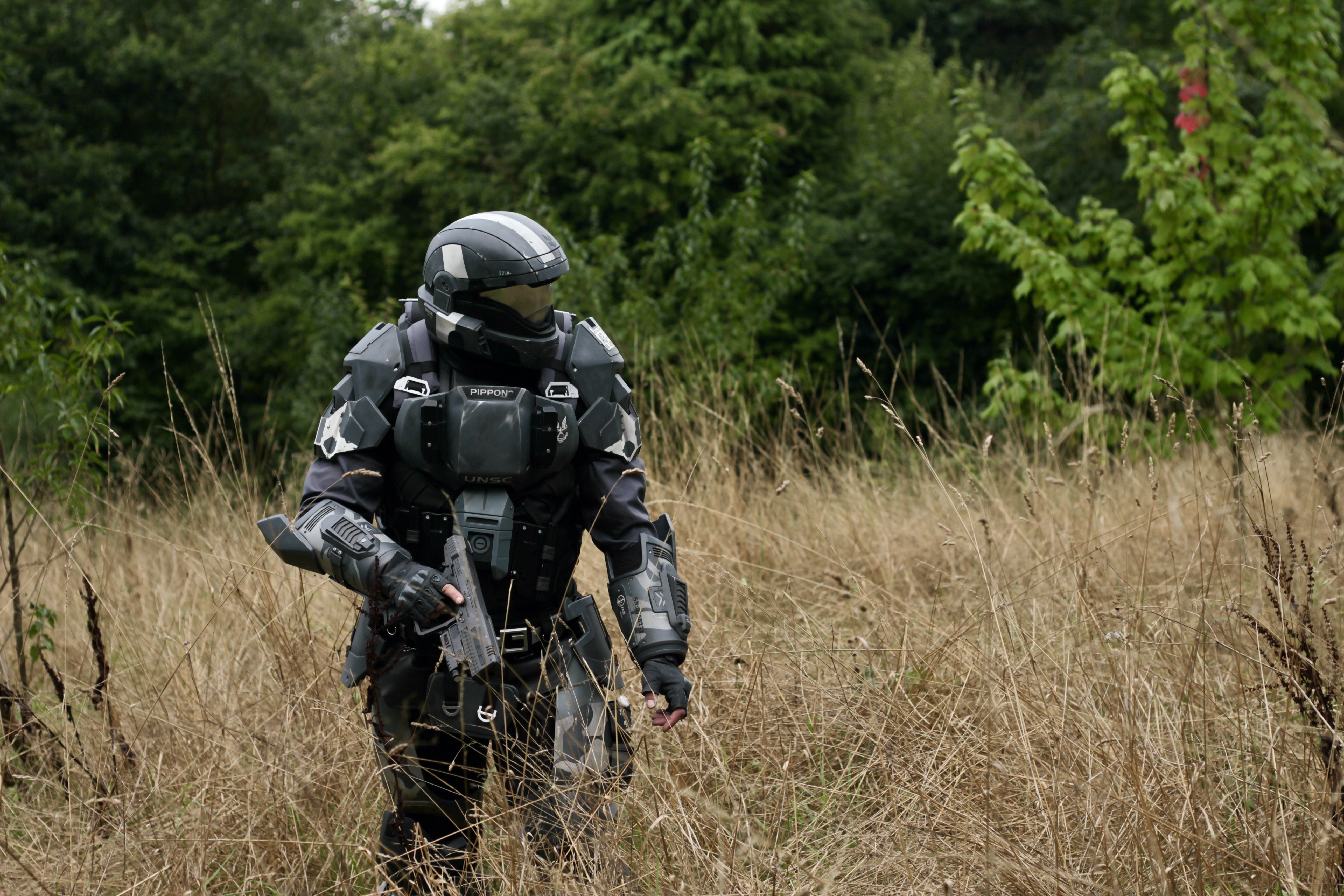 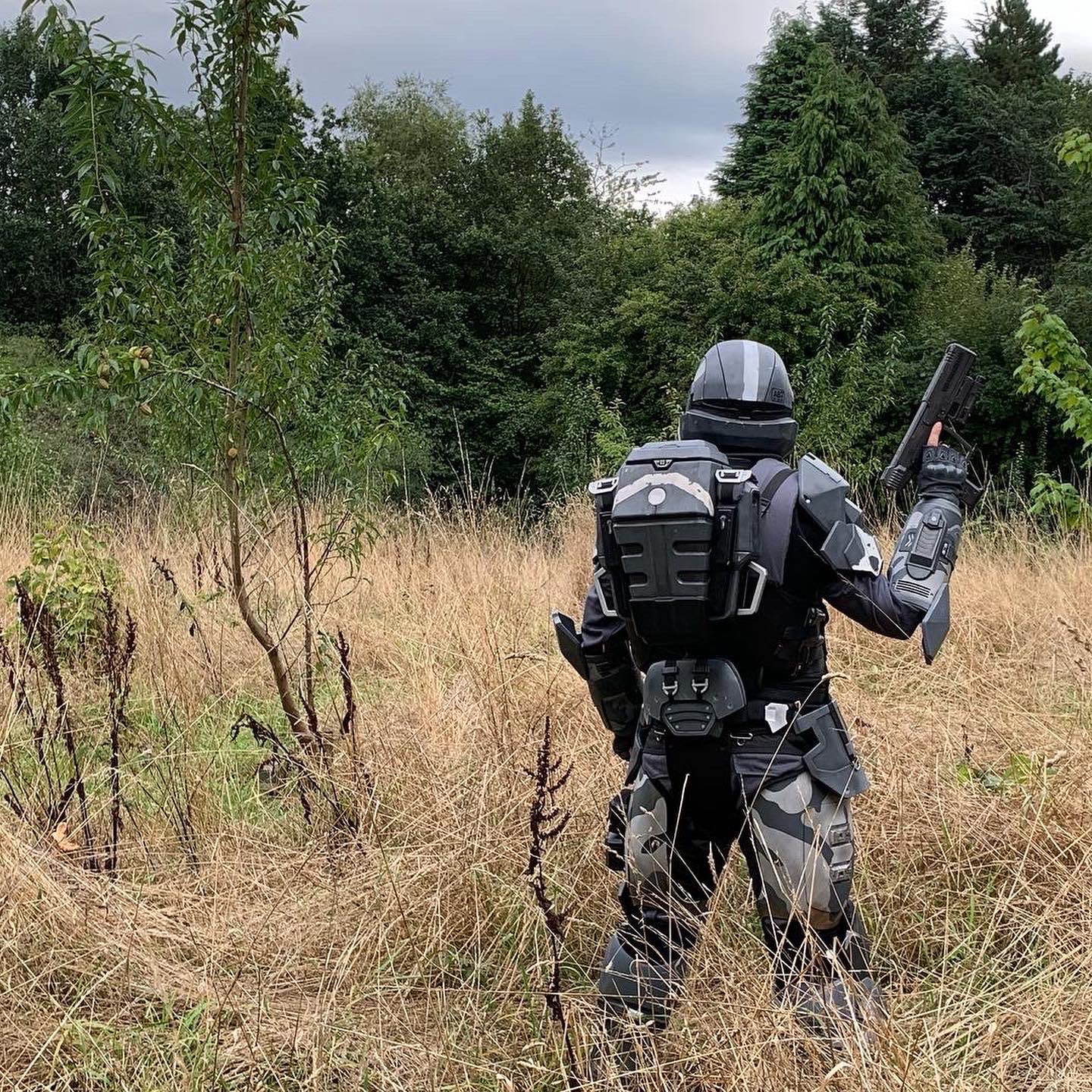 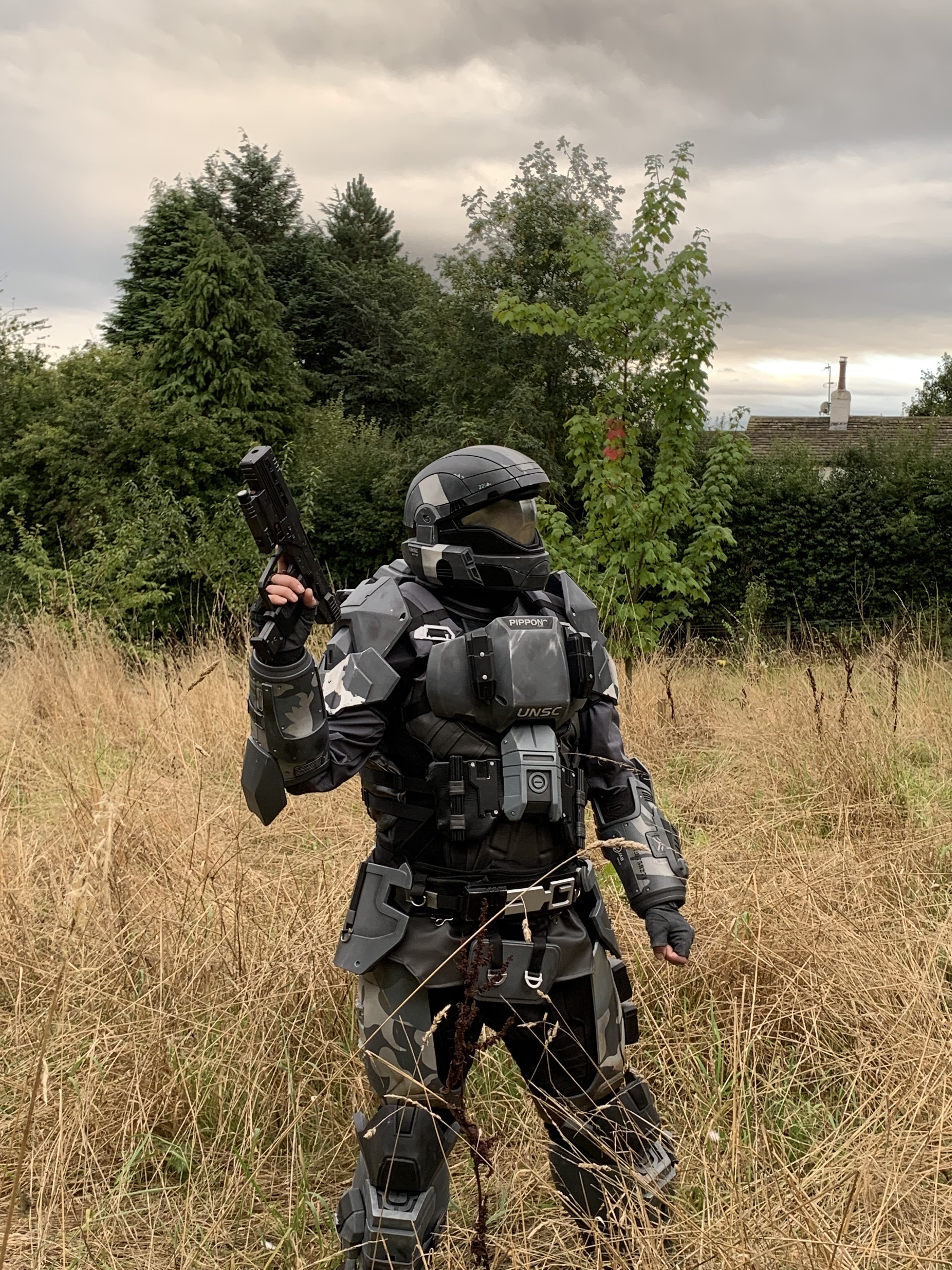 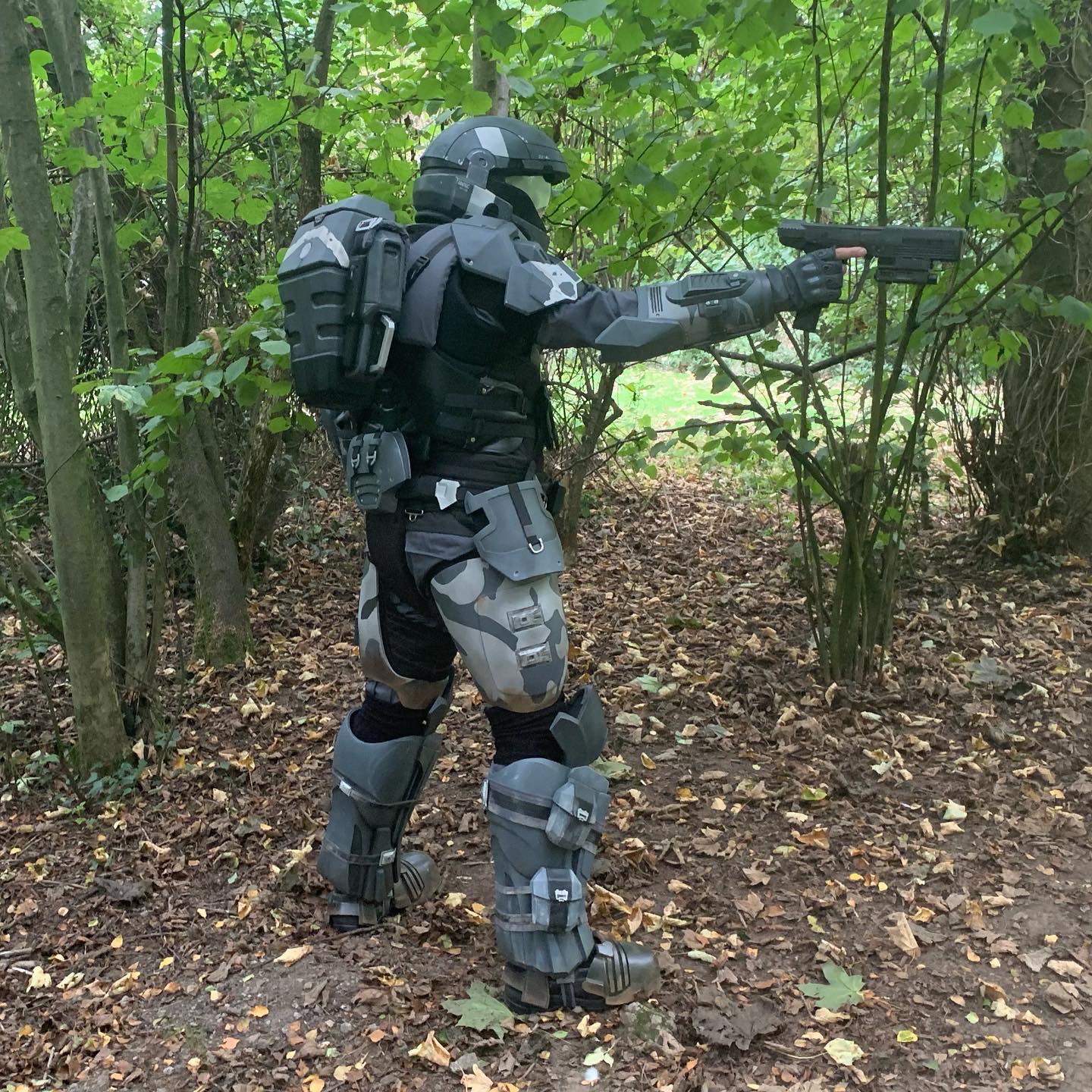 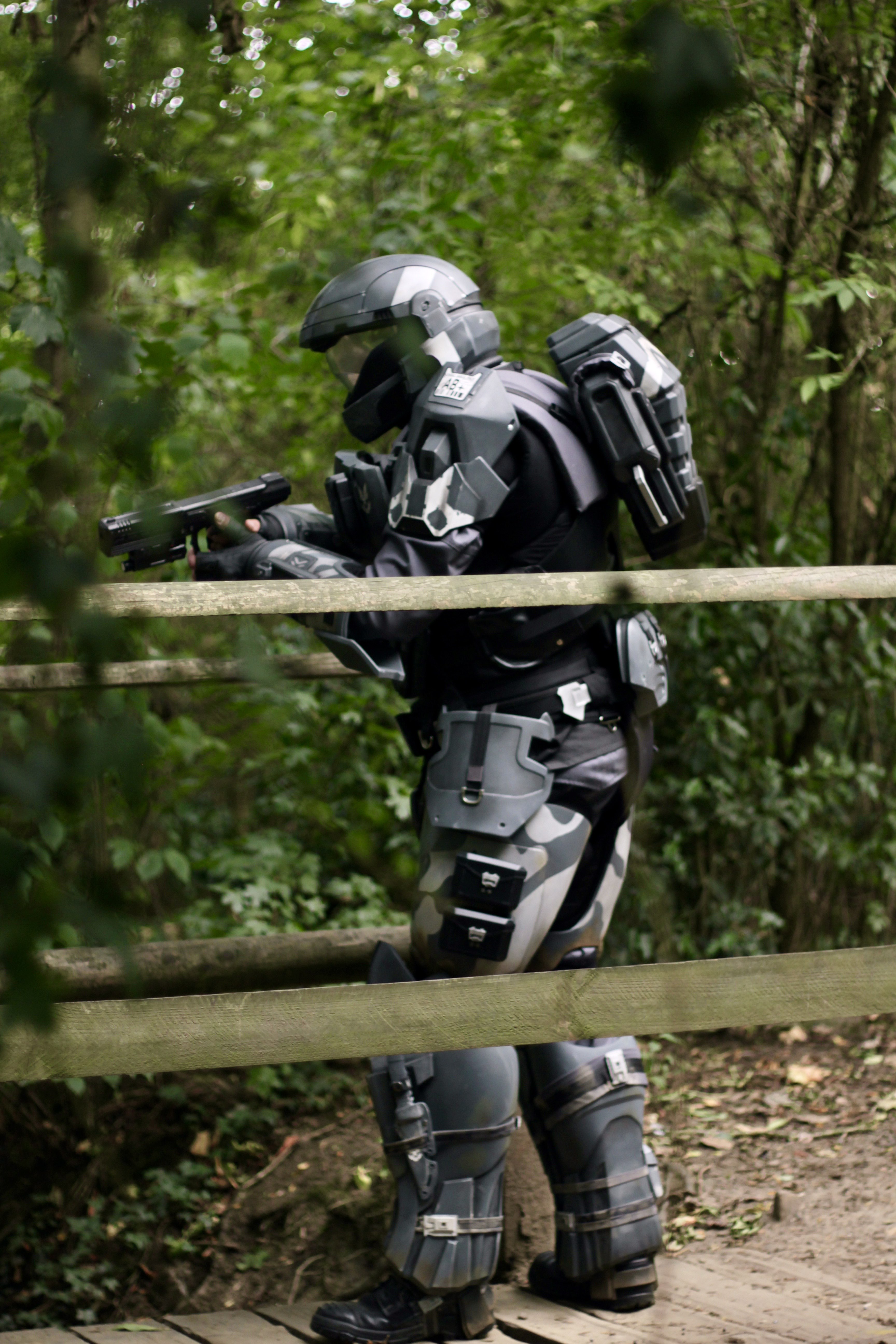 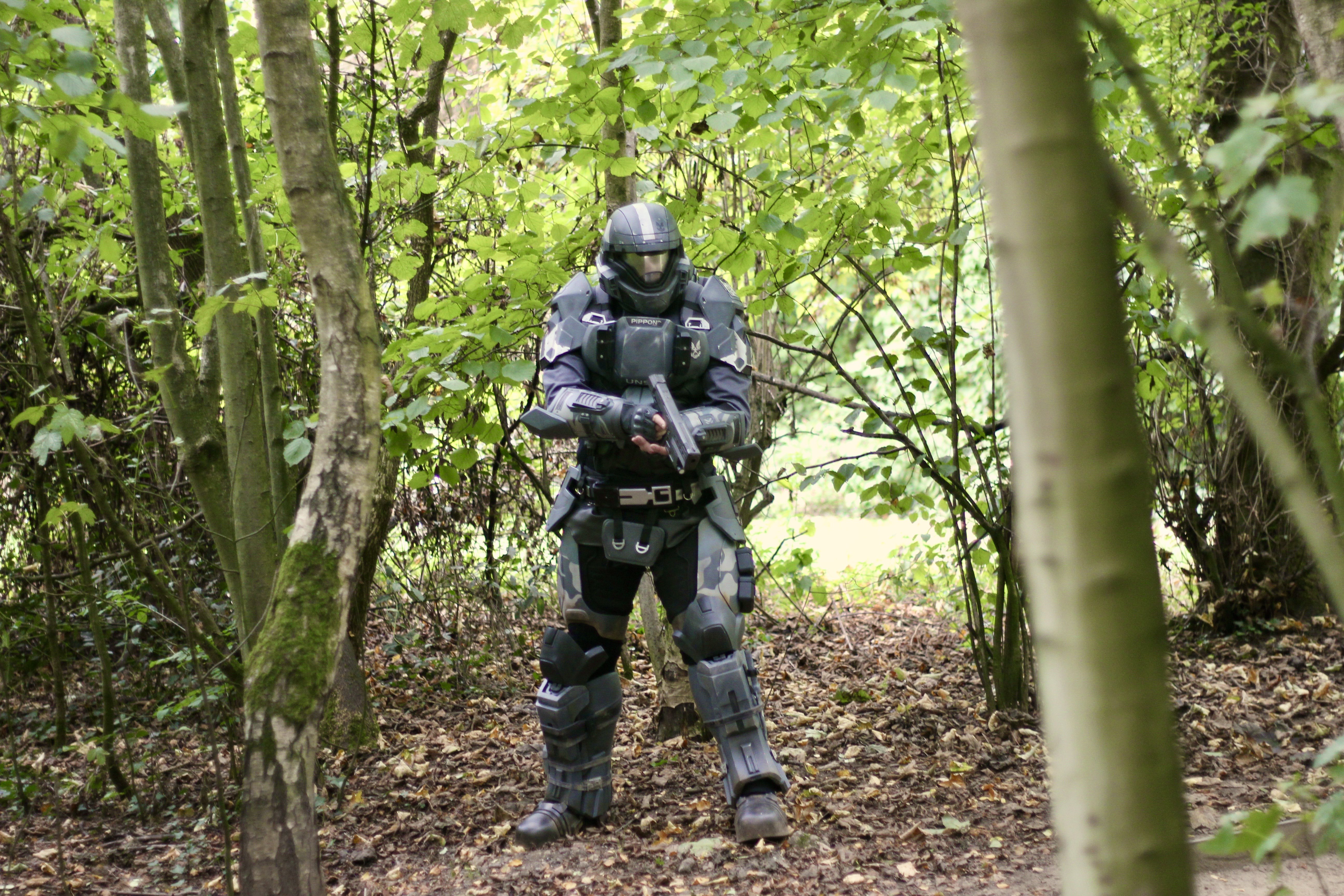 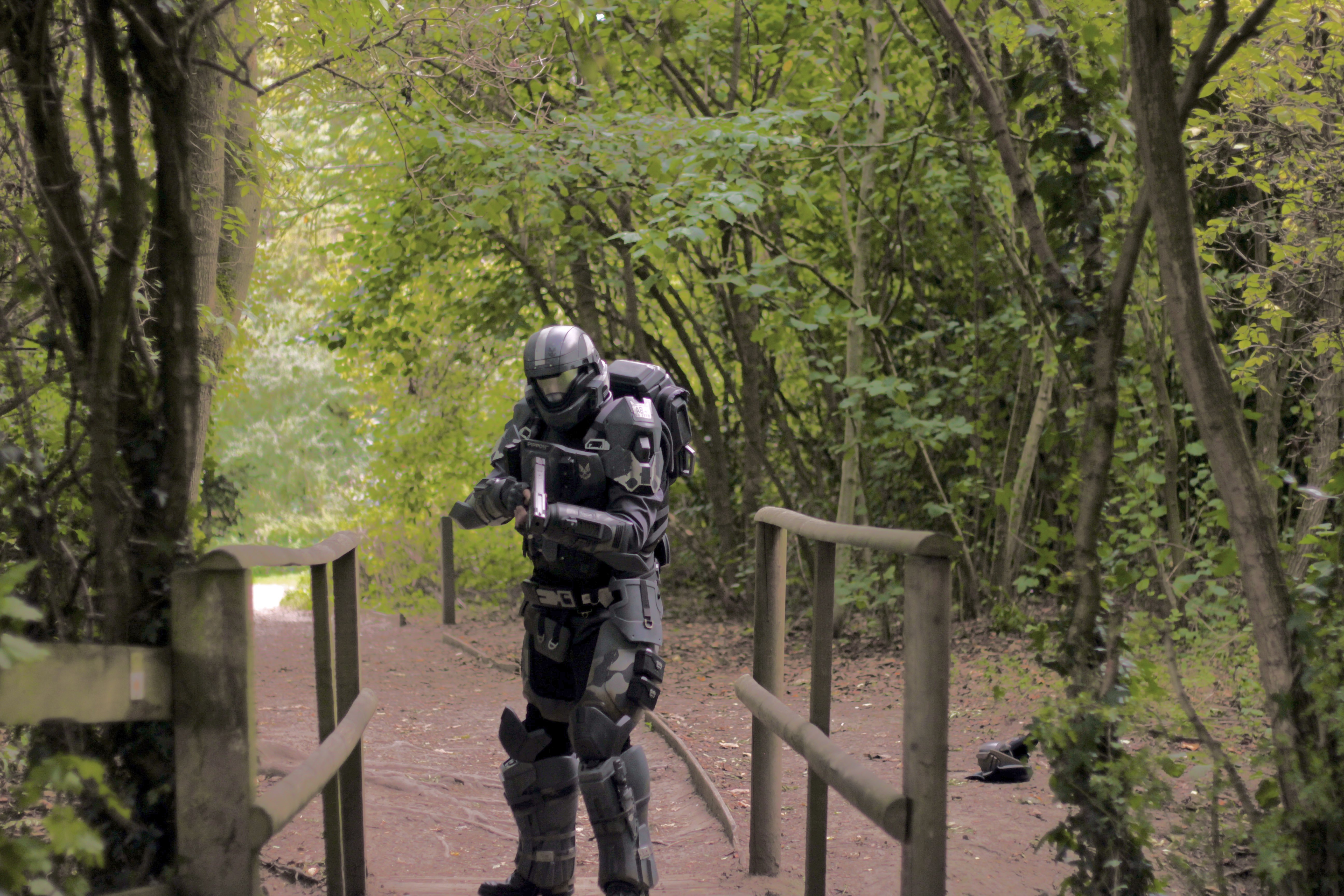 European Regiment
405th Regiment Officer
Your hard work really shows! This is one of the best ODST suits I have seen so far. Great work!

Masky said:
Your hard work really shows! This is one of the best ODST suits I have seen so far. Great work!
Click to expand...

Thanks! It's great to hear all the grind has paid off! Still a bit of fine turning to do (and additions!) but its great to be able to suit up AT LAST

pippon said:
Thanks! It's great to hear all the grind has paid off! Still a bit of fine turning to do (and additions!) but its great to be able to suit up AT LAST
Click to expand...

wearing the completed suit for the first time is a special feeling. And for the fine tuning, for some it never stops. My Spartan (rip) was modded for years until it was destroyed. You will always find something that works better or looks even cooler haha

Not only did the suit come out beautifully but you had a great photoshoot for your first time out!

Mini update: after my test outing, as i said prior, i noticed a few issues.
One big one was the visor: it seemed fine enough in the confines of my house, but it turns out: it was not at all.
Visibility was so poor i could barely move without help, so that needed gutting and replacing. My prior issue was id formed the visor just fine, and even chromed it fairly ok, but then i made the mistake of clearcoating it to protect the chome and that just nuked the visibility.

Second attempt, and to eliminate the possibility of screwups before my october deadline, i went for the tried and tested "just make it dark" approach. Which involved a sachet of idye poly (i went with silver grey, which it decidenly wasnt) some 60 degree c water, and a metal pot. 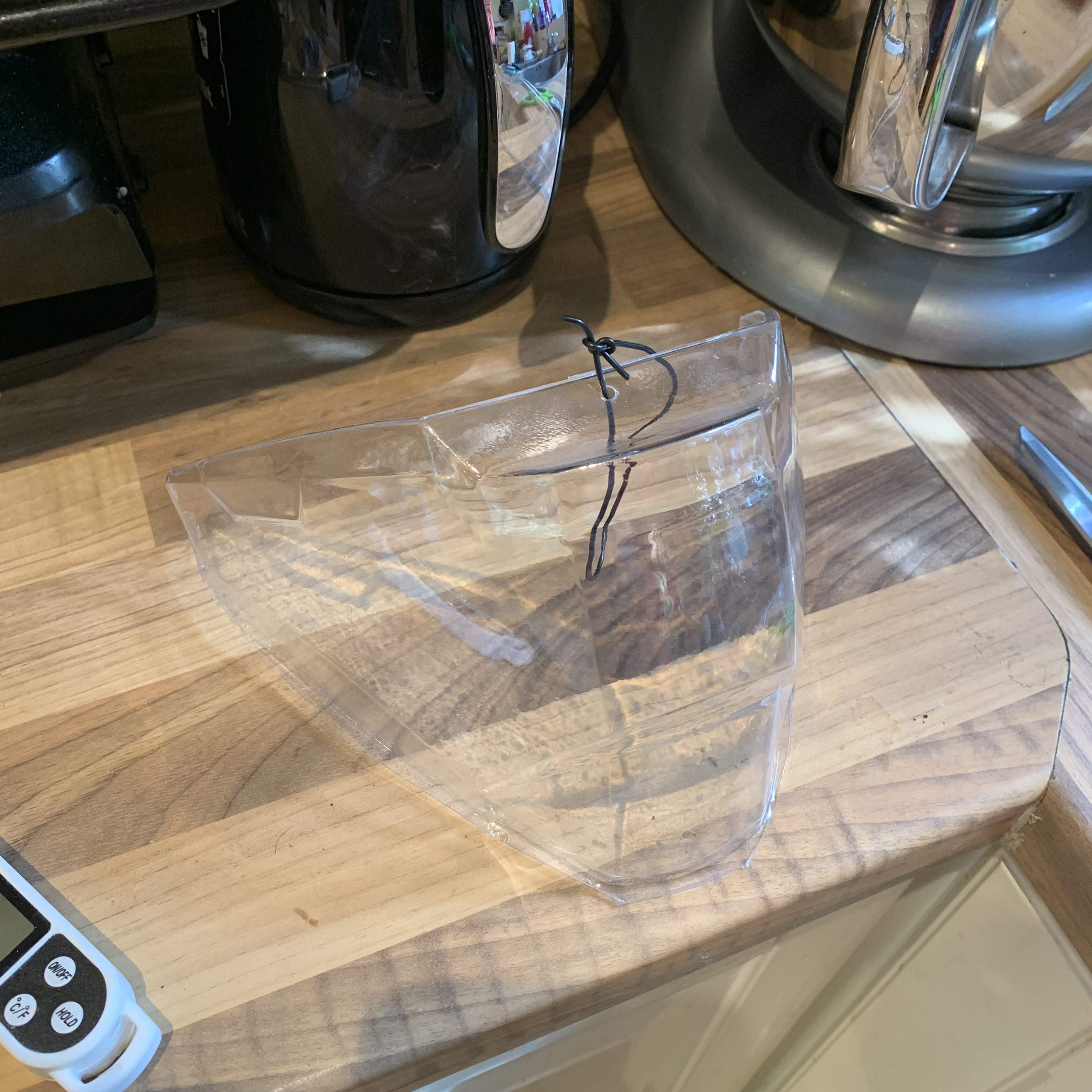 take formed visor (made from petg) and punch a hole in a spot where nobody is gonna see it (spare flashing). run some cord through the hole. 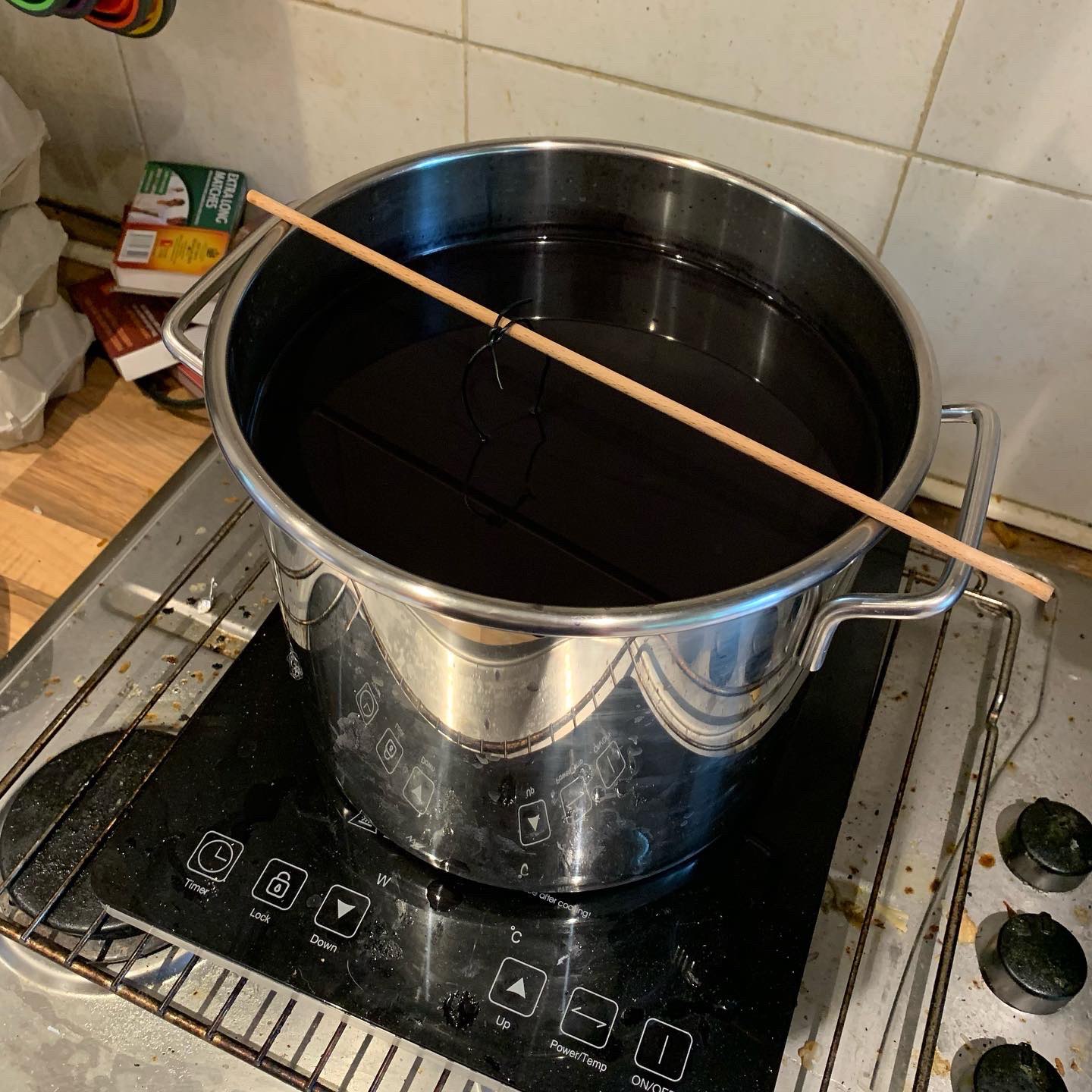 mix up your DIP. Again, idye poly (and after mistakenly using rit dye prior which did bupkis i recommend using idye poly and not something you feel equivalent, but thats my experience) added to a pot of water that you can submerge your visor in, bring the DIP to 60 degreec c, then turn off the heat. I used a meat thermometer to check mine, you should probably use something for liquids.

run stick through loop attached to your visor, rest stick on edge of pot so that visors suspended in the middle of your DIP.

Set a timer for 5 minutes. Remove visort after 5, and quench it in a pot / sink of cold water.
Your visor will now be tinted. A bit. Rinse and repeat this process as many times as you feel you need to get THE DARKNESS. I think i did it like 8 times. 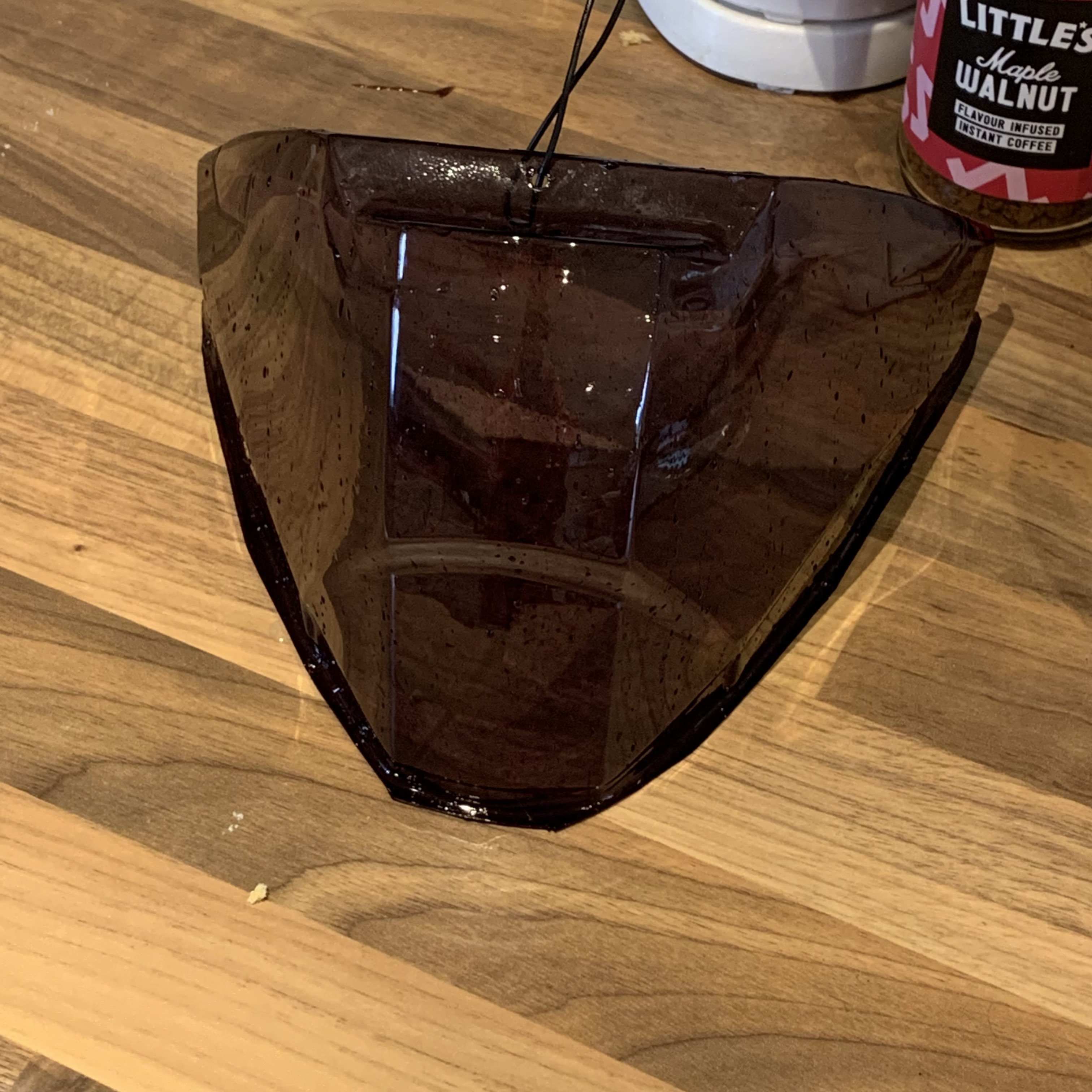 One MOIST visor. Allow to dry. 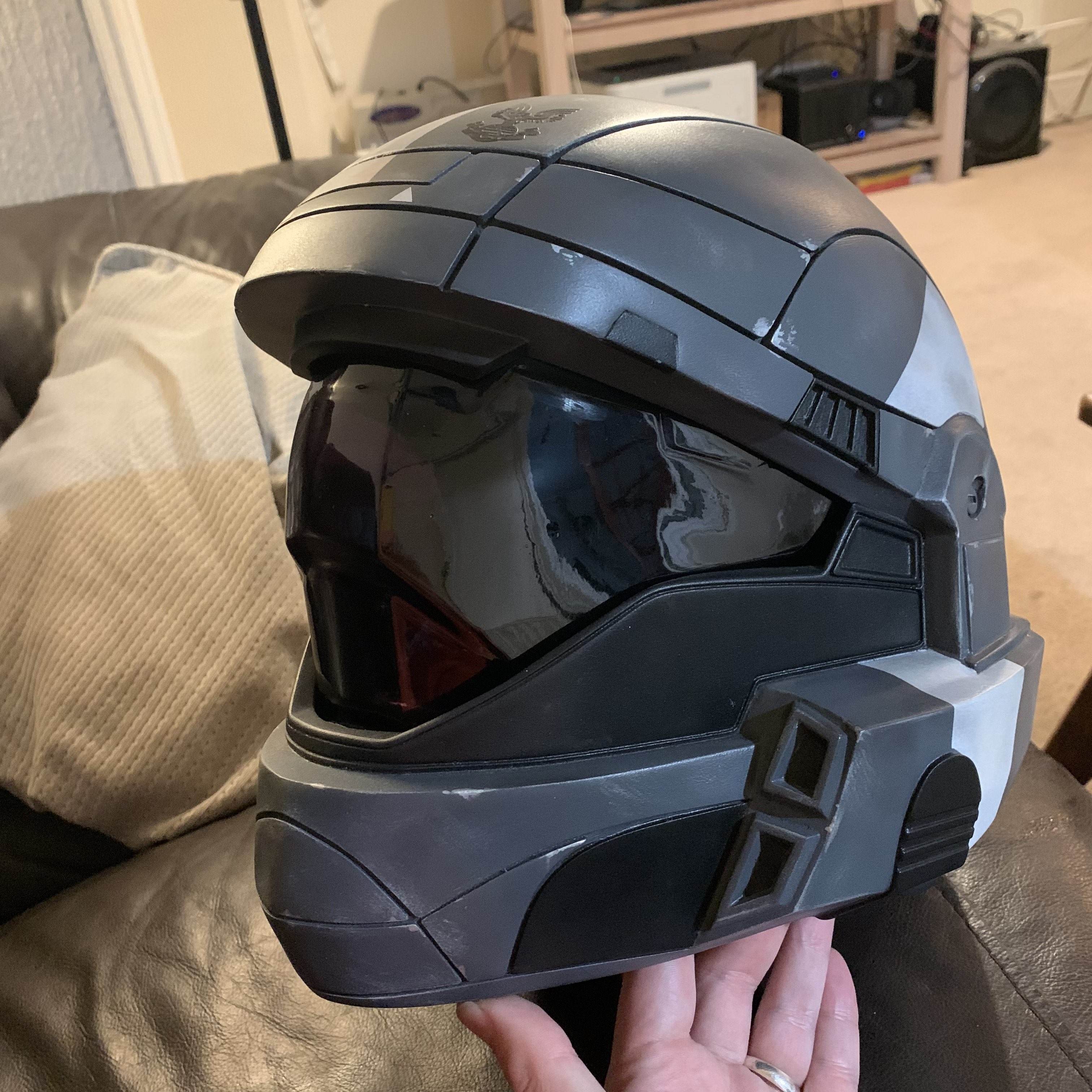 Fit to your bucket and behold how the colours not quite what you wanted, but nobody can see your mush through it so hey ho good enough for the UNSC.

Rock Lobbster said:
Not only did the suit come out beautifully but you had a great photoshoot for your first time out!
Click to expand...

The photography i owe entirely to my fiance, a long suffering victim of my making the garage a mess with spraypaint. He does know his way around a DSLR, i personally love the ones in the yellow grass.