Since I seemingly can't post in the creation discussion...

Right, so. Since I'm a relative newbie (new time poster, long time reader!) I guess I'm still too new to post in the creation discussion forum - not a prob, I'll just dump my thoughts in here for the time being :3

Marines. ODSTs. Badasses, every one. Many dress as the Chief and his Spartan bretheren, but true men join the Corps!

I've been staring at screen shots endlessly in between watching the live action combat shown in the Halo 3 ad campaign. Every bit of it is wonderful, and as an Aliens costumer I really feel the need to add the UNSC uniform and gear to my collection!

Besides downloaded .avis of the ads, I've also been staring at this archive of Marine screenies:

The idea was to set up a small armoury in mt garage, cut down sheets of steel or aluminium, and bash out the armour plating, and of course the helmet itself. Pepakura files for the chest and back armour, helmet and so on would be great - but I have yet to find files for the Halo 3 Marines as yet - which would probably make the templating process FAR easier.

The secondary armour onto which the body armour is built on appears to be motocross armour, looking at how it wraps around the Marines, has the spine protection, and also offers the upper arm padding:

So, remove the pads already present, build in steel/aluminium plating, uniform underneath, soft cover/helmet on the head, then build up the leg webbing/armour panels and boot parts!

My first thoughts on the underwear. The camo is reminiscent of British DPM faded down to greys in the way the lines move, although the camo in the games and the clips was far more blocky:

I've been told that trying to wash it at 95 degrees would be a good start, just to see if it will fade down. Personally I'm not confident, but at the same time, I am unsure whether dying would really do anything... has a camo pattern been confirmed from the adverts?

Then boots and lower leg armour. Regular assault boots/black jungle boots would be the basis. Steel/aluminium plates are attached to a rubber sheet which is then strapped over the top of the boots. Retaining straps could be added to make sure they don't slip. As for the chunkier plates... these would be much harder, since the steel/aluminium plate would need to remain somewhat adjustible. Perhaps make the rear "central" calf piece slide underneath the plating? I get the feeling these would have to remain quite loose. I could see them getting very uncomfortable. Same can be said for the knee plates. That said, both of these could have closed cell foam undersheeting, so it could be made more comfy...

The biggest conundrum I have is the shoulder/neck armour. I loved how in the videos the Marines actually had a classic flak vest style neck armour, rather than the games which seem to have a complete composite armour around that area. Flak vest would be softer and prevent scratching on the helmet should I wear one - the armour would probably need some serious modifications from the game type if It was metal. Not sure what to do about that.

Any thoughts on what I've been musing on?
V

DO IT! That's my thought.

Following discussions with the creative geniuses at work, what do you think - metal armour, or fibreglass?
V

If you can pull it off, metal. There's something sexy about that. Just ask the Fett fans - metal Jango trumps glass Fett. Plus you get the added benefit of not having to paint metal scratches into the stuff.
L

Removing the indented piece at the back could make for a great Marine helmet - thanks mate!

JediFraz said:
Fal? How you doing mate?
Click to expand...

Not bad at all, not bad at all. As you can see, I'm just trying to get my special D*Con costume in order

You got any thoughts that could add to the list of musings here? Any uniform fading tips, at all?
Last edited by a moderator: Feb 25, 2017

European Regiment
Very very diluted bleach. Mist it on then when drt Mist on a grey fabric dye. That might do the trick.
Although UK DPM isn't very resistant to bleach.

4778786-Full.jpg looks more like MAA 2pat but greyer. Have you looked at urban multicam?

Or this polish urban looks not too bad if the blobs were bigger.
http://img226.imageshack.us/my.php?image=mulicampl1cw.jpg

I think most people are just going to go for std urban gear, but faded.

JediFraz said:
Very very diluted bleach. Mist it on then when drt Mist on a grey fabric dye. That might do the trick.
Although UK DPM isn't very resistant to bleach.

4778786-Full.jpg looks more like MAA 2pat but greyer. Have you looked at urban multicam?

Or this polish urban looks not too bad if the blobs were bigger.
http://img226.imageshack.us/my.php?image=mulicampl1cw.jpg

I think most people are just going to go for std urban gear, but faded.
Click to expand...

The camouflage is most definitely two-tone between a VERY light grey and a medium grey colour. The camouflage pattern itself varies from wavy to blocky, making me instantly think of a cross between desert DPM and Splinter camouflage. Assuming the colours fade the same way as MAA 1Pat BDUs do, it seems like Dessie DPM would be the natural choice considering the colours and pattern. If only urban Splinter was available...

Urban multicam? Never seen it myself. Will google
Last edited by a moderator: Feb 25, 2017
C

If you make the pieces out of aluminum you shouldn't have much trouble keeping things in place since it will weigh less than steel by quite a bit. The upper and lower torso pieces could be connected so that the lower part moves under the upper section when needed.

European Regiment
Right enough. I can't find my ref photos online.. It was like a blue/grey shifted of multicam.
Oh well put that one down as clueless...

How about the New NWU?

JediFraz said:
Right enough. I can't find my ref photos online.. It was like a blue/grey shifted of multicam.
Oh well put that one down as clueless...

How about the New NWU?

Good God that kit is bright! Far too early in the morning for that kind of contrast XD

I think I'll try the bleaching of the Dessie DPM and see how it comes out - try it first with the pants and work from there.
Last edited by a moderator: Feb 25, 2017

Well, here's the result of my little experiment: 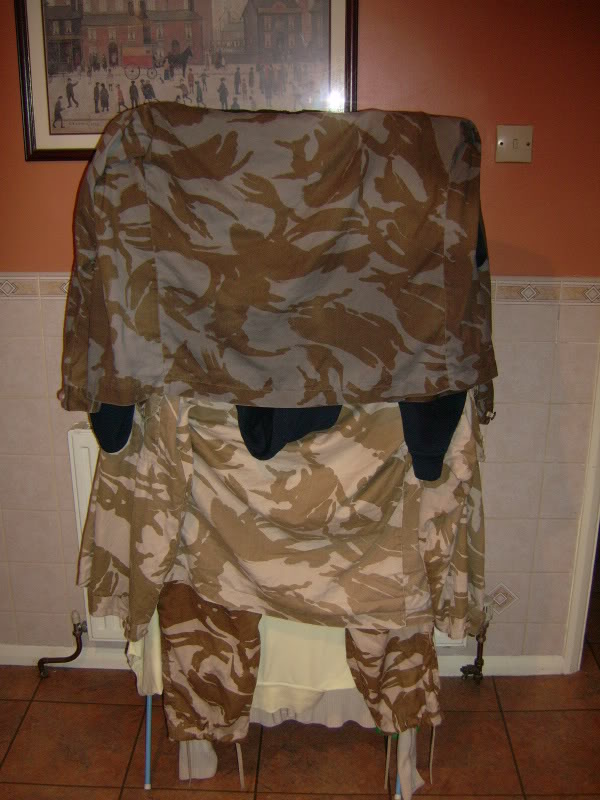 The patterns are clearly visible. What do you think? :\

European Regiment
Getting there/ Another couple of darker grey washes..

Or failing that, I noticed Scapey at the weekends 'Children of men' camo was pretty good.

JediFraz said:
Getting there/ Another couple of darker grey washes..

Or failing that, I noticed Scapey at the weekends 'Children of men' camo was pretty good.
Click to expand...

Aye, I have two sets of that. It's a good camo, but again in the wrong direction from that used in the game :\

Thankfully, not much camo shows - but from the looks of it, I may as well stick with washed out Desert DPM - the shirt in the middle doesn't look *that* far off...
Last edited by a moderator: Feb 25, 2017

i have NO idea what i'm doing haha

i have NO idea what i'm doing haha