it will be edited with missing info in the future (squad, rank, etc)

Taken by the Spartan III Program in 2537 as part of Beta Company at the age of 7. First deployed by Senior Chief Petty Officer Franklin Mendez on 27 June 2045 to the human colony Verent along with 3 other Spartans of Beta Company designated as Shield Team. All Spartans were outfitted with MJOLNIR and sent as a "non-combat" team to aid the people of this outlying colony. Their true purpose, only later discovered and sadly never utilized, was to set up an extraction point for Beta Company should Operation: TORPEDO need it. Shield Team was heavily equipped with defensive armor and gear.

During their weeks on Verent, Shield Team received numerous reports of Covenant invasions all throughout human-controlled space and were not happy to be waiting around as a relief effort. Shortly after Operation: TORPEDO was deemed a success, Shield Team learned that there were no Beta Company survivors and no one would be coming to Verent. Now hotheaded, the team's leader Zan learned that his home world, Draco III, was currently under Covenant control. They abandoned their post and joined up with the Spartan-IIs on Draco III in the retaliation attack. With no human civilian survivors and no Covenant forcing remaining, the mission was again considered a "success." Tired of the UNSC's ideas of "acceptable loss," Shield Team decided to take more preemptive measures. After going AWOL, their last known destination was into Covenant-controlled space.

Spartan B-128's last known whereabouts are still unconfirmed and his armor, along with the rest of Shield Team have never been recovered.
Last edited by a moderator: Aug 2, 2017

Not to be a buzzkill Duke, but I put in for B-188 1 week ago and about 5 posts up. It hasn't been confirmed yet, but I did ask first :unsure

Pacific Regiment
_-=EDIT=-_
Name: S-169: Tucker (Yortsorm)
Spartan-II Class-II
Blue Team/Spartan-II Project
Rank: Cpt
Armour: Aqua "stock" MK VI MILONIR
Gender: Male
Appearance: N/A
Preferred weapon: Energy sword "Key"
Armor Enhancement(s): Helmet Camera
(NOTE: my character is Tucker from the Red VS Blue Series)
Breif BIO:
Prior to Recreation, Tucker's personality was shown to be immature, perverted, and sarcastic, and highlighted his obsession for women as well as making sexual jokes at any opportunity. Although he was the highest-ranking army official on his team, he allowed others to take command, such as Church. Later in the series he found the Great Weapon, After his return in Recreation, he is shown to be (slightly) more mature and skilled, due to the fact that an alien race chose him to be their hero. As the series progresses, Tucker's sense of responsibility and skill continue to grow, specifically after being forced into a leadership role due to being caught up in a civil war on the planet Chorus.
Helmet Camera (RVB):
"Jensen and I have installed capture software into all of our helmets, allowing us to transmit what we saw on the battlefield to a local server"
-Simmons in Training daze
The Helmet Camera (also known as Helmet Cam for short) is a piece of capturing software equipment, created by Simmons and Jensen, that possess the ability to record footage on the battlefield from a soldier's visor and transfer said footage to a local server. If a nearby server is unavailable the helmet cam can be operated by an A.I.

~Yort
AKA
Lavernius Tucker
Last edited by a moderator: Aug 2, 2017

Canadian Regiment
After searching the numbers I see that the one I want is open. J042.

European Regiment
OK, I THINK I POSTED IN WRONG THREAD AS NO ONE REALLY WILL READ THIS HERE, CREATED A NEW THREAD FOR BRAINSTORMING HERE

Sorry for posting here again, but lately I've gotten an idea how to "improve" posts in this thread - Spartan bio.

What would you guys think of something like that? Some magic and ta-da, instead of writing stuff down, how would such "visualized bio" look like?
Also, it could be implemented to all Spartans, ODSTs and others.

PS. It's more of a concept/idea.

Just in case, I just copied my earlier info I wrote:

After Spartan-IV program launched and Spartans became own branch, to make everything official S-713 and also received a Service Number ID 07134-52713-MS. 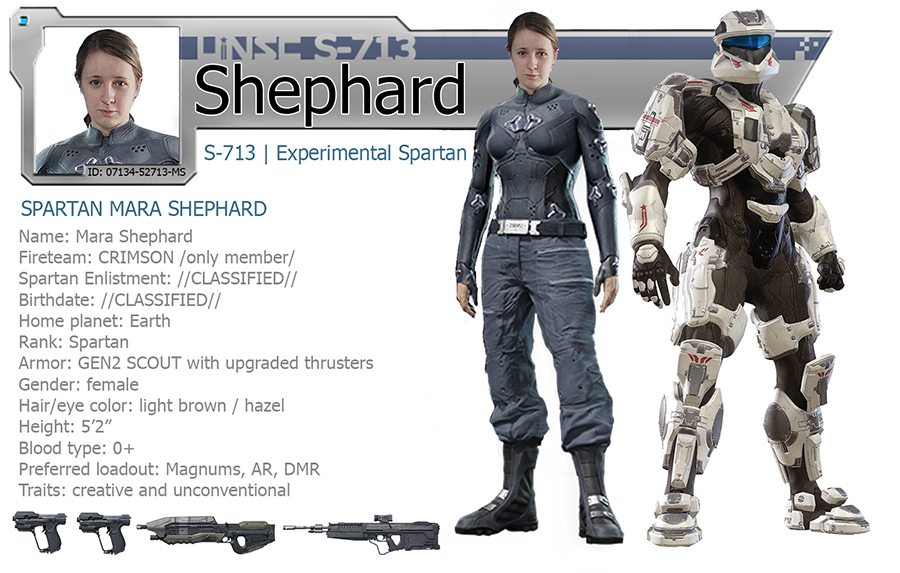 Brief Bio:
Originally known as S-386 but ONI decided to due to his downgraded condition take his full 386 and rename him S-X86 to denote his status While still keeping him on the Spartan ll roster.


He is Skills are in hacking tech.
While in a advanced power systems class towards the end of his Spartan ll specialist training track,
he decided to try to charge up his suit with the power supply on a captured covi Drop ship,.
Ends up Covi drop ships have a positive Ground.
The several Kilo Amp Surge caused his suit to fail and destroy his knees and legs.
His suit was Fixed and was retrained as a Experimental as the surge made him too muscularly weak in the lower body to still be rated as a Full "Active duty" spartan ll
His current Status is to test armor for EMP Resistance . ONI released that cause he survived that massive surge His body has become rather tolerant to HV and EMP.
He can take a HV Lickin and keep on tickin !

I am confused. Is S-013 taken or not? Because according to the post, bold numbers are completed entries.

Spartan201128 said:
I am confused. Is S-013 taken or not? Because according to the post, bold numbers are completed entries.
Click to expand...

No idea.
I've learned this thread is kind of 'on hold' til the Staff will upload the new updated-thingy to become a Deployed Member, so it should rather be changed so that Deployed Members can get a number, not everyone who just signed up.
Imagine someone took a number you want, and they just signed up, posted 1-5 posts, spent few minutes and disappeared... never been seen again...

Southern Regiment
As I understand the rules, I can haz B312? My entire character/cosplay is built around his character, so if I can't have that then I don't think I want to be recorded.


Brief Bio:
One of the first candidates selected for the SPARTAN II program, Slade brings a new meaning to the term Lone Wolf. Deployed for long periods, sometimes even years, Slade's main duty is to go behind enemy lines, be out-numbered 1000 to 1, and make it back alive. He is ONI's favorite Covi unit destroyer.

European Regiment
BroodierGoose1 - while it is appreciated you doing this post, this thread is no longer updated. To get the number you have to apply to get deployed (for more information look for Deployment)

@Lt Shiny Sides - No. Quoting the Deployment rules:
"Division will do our best to ensure that you get to keep your ID number so long as it adheres to a couple of rules. First it cannot already exist in game (ie: 117). Secondly, it must be a maximum of 4 numbers."

Also, I think it would be best to close this thread then?
Since the numbers will be given via being deployed...

Southwest Regiment
Before you lock this thread, could you link to the deployment rules you just referred to? I've never read any thing about a four character limit. Limits you to 10,000 deployed members (not a huge concern i guess), and only Spartans get to use in-character service numbers. Marines, ODST, and navy have to pick numbers that have nothing to do with their build, which can be a let down.

ODST Build Log, a Great Journey through the past few years as a member!
2